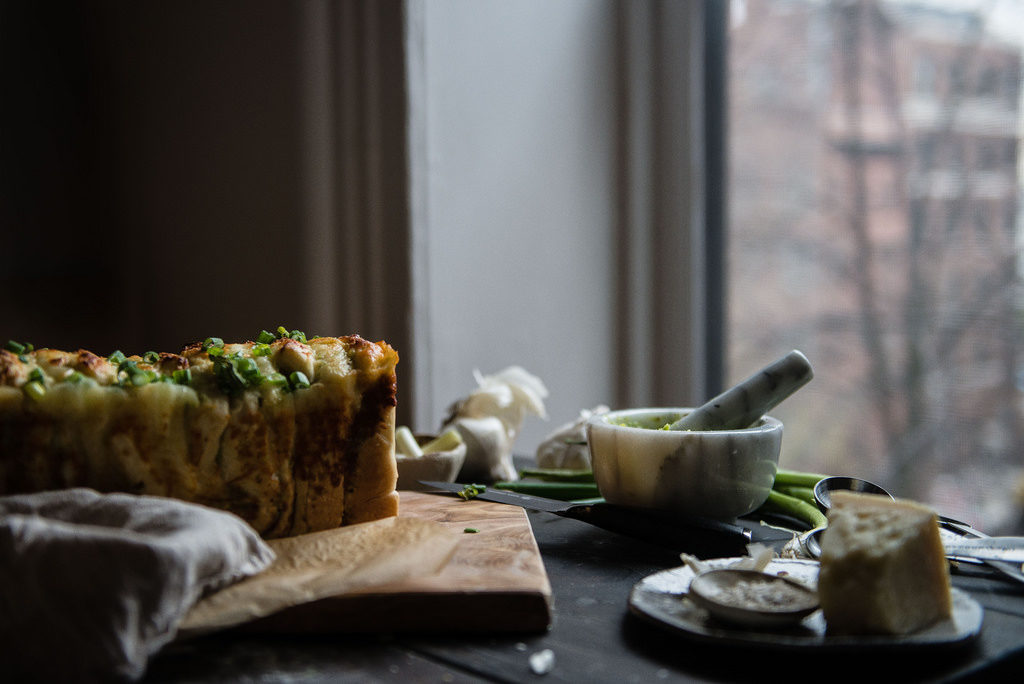 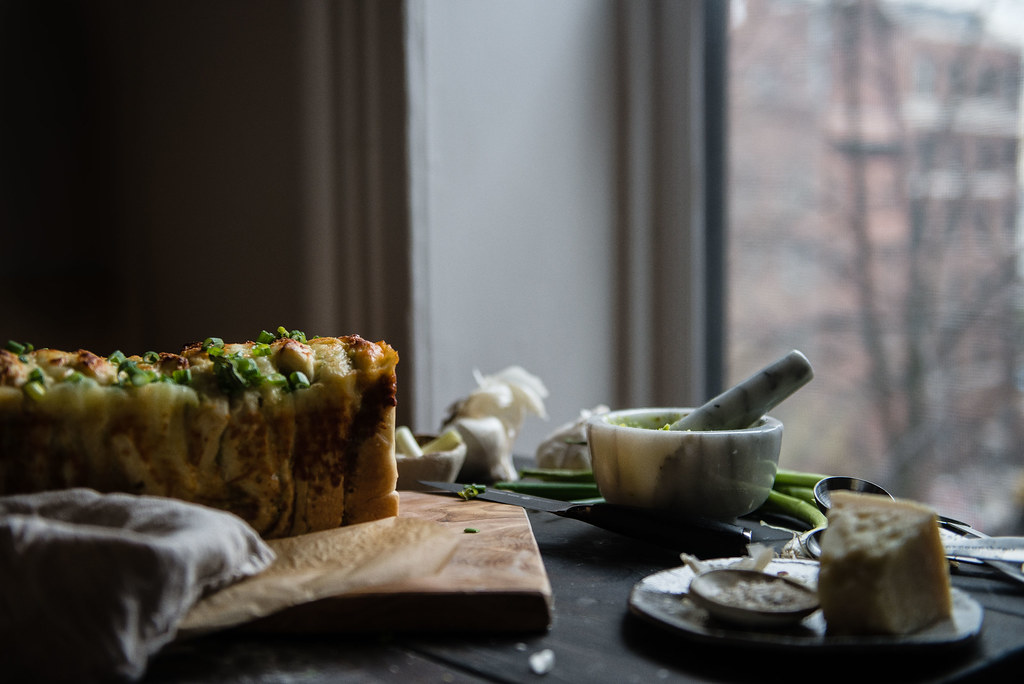 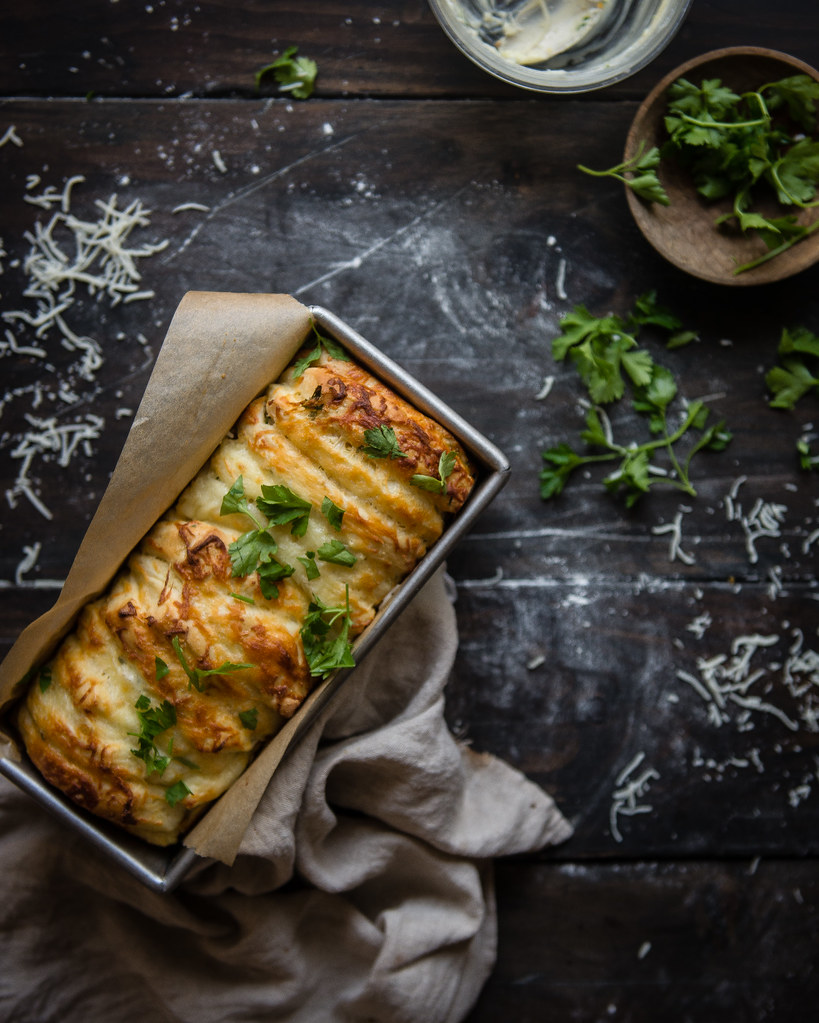 We’ve had adventures this week!  Last Friday, I braved the pre-blizzard craziness at the supermarket to buy the only things I thought we needed for a snow day — (a) pork and (b) bok choy for (c) lion’s head meatballs.  And maybe also some seltzer. While the person ahead of me lugged gallons of water out of the store and the person behind me lugged gallons of water onto the conveyor belt, I went home with my pork, bok choy, seltzer, and zero gallons of water, and I’m fairly sure I texted B2 something like lol the supermarket is crazy as usual even though nothing ever happens, what is this storm even called again.  I think you know where this is going — 24 hours later (and just as B2’s cousin came to stay with us, sorry Justin!) the water in our little building did go out, then the heat did too, then right when the water got fixed our sink flooded the kitchen. Haha. And I learned the storm was called Jonas.

It was actually not that dramatic — the building owners are wonderful and live right on the first floor (okay, so I think it was more dramatic for them), the heat came back in about the time it took us to zip up our jackets, and even though our overflowing sink didn’t get fixed until yesterday, it was really just an excuse to eat take-out for three days straight and imagine myself as Mickey in Fantasia whenever I had to dump out the water.  But I think this means I’m officially disqualified from making fun of water-buying fellow citizens ever again.  You are wiser than me, neighbors.  (Although this all happened after I made the meatballs!  And they were hearty and comforting and sustained us through our no-heat no-water day!  So.) 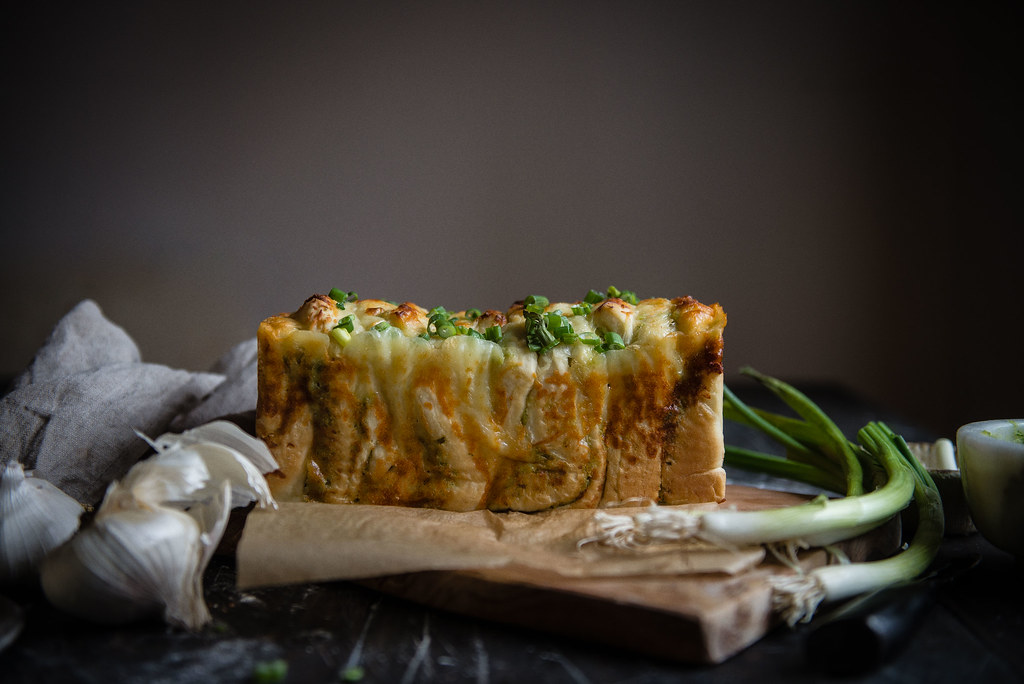 Anyway, back before all these Jonas hijinks, in a clean(er) and drier kitchen of mine, I got the chance to bake a couple of these pull-apart loaves.  I’ve been waiting to make one of these creations ever since Kelly posted this masterpiece a couple of years ago, and my golden opportunity finally arrived a couple weeks back, when a couple friends of ours hosted a Star Wars marathon before The Force Awakens and I couldn’t get over the idea of bringing a squishy, ripply-topped loaf of cheesy garlic bread dubbed Jabba’s Neck Rolls.  Because, as it turns out, really gross names for food only make me more gleeful about eating them. I hadn’t thought to share the recipe at first (despite the super-glamorous name) but it ended up so tasty that I made another version with scallion pesto, and here they both are.  Both loaves use my very favorite enriched bread dough, a simplified and lightened-up milk bread that has slowly become my standby ever since I first used it in these black sesame rolls, and the rest is just easy, cheesy heaven — this garlic bread version uses lots of melted butter, garlic, mozzarella, and Parmesan, with parsley here and there to add some brightness (and a green tinge, à la Jabba).  It’s nice and simple, with all the crowd-pleasing things that you can’t go wrong using, and with a storebought pizza dough or biscuit dough you could make it even easier.  I think I’d bake it even without a working sink.  (Who needs clean dishes when you have bread?)

Hope you all stayed warm and cozy this weekend! 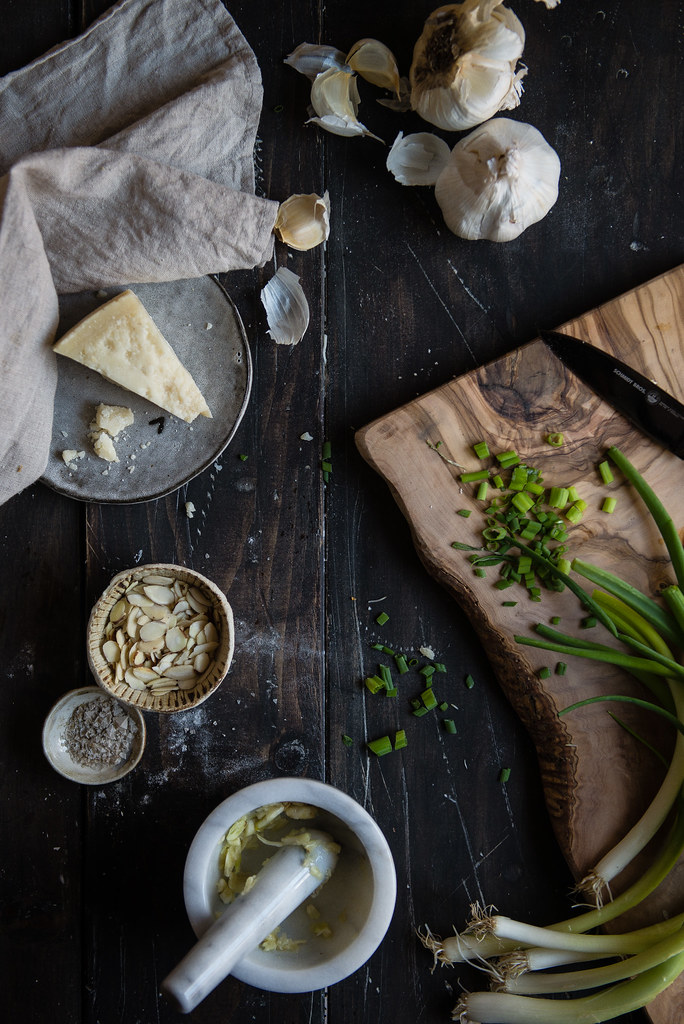 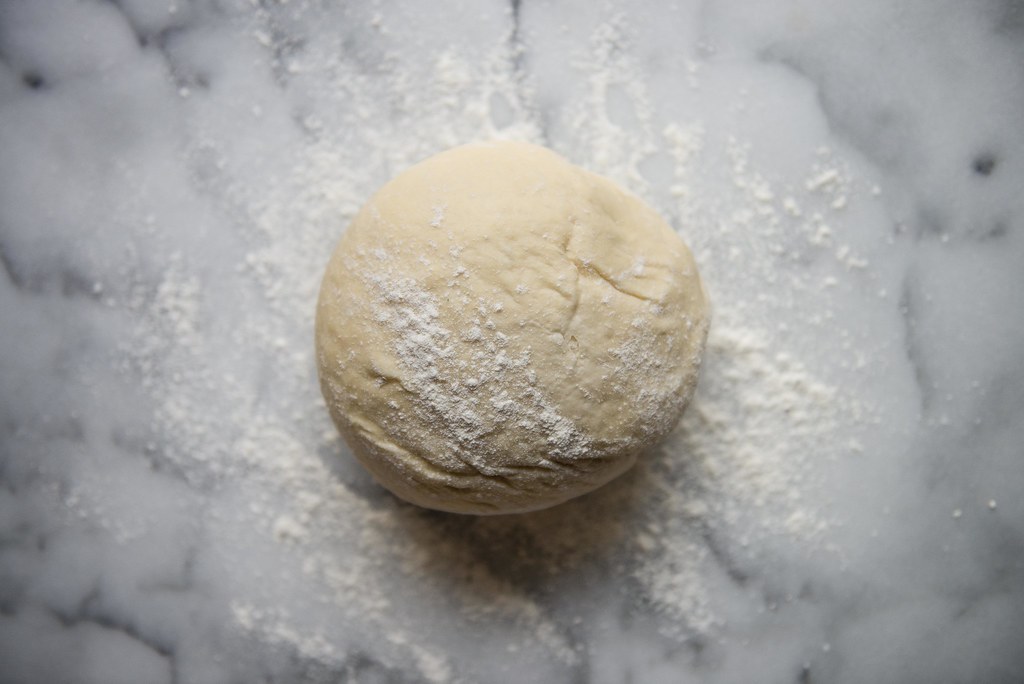 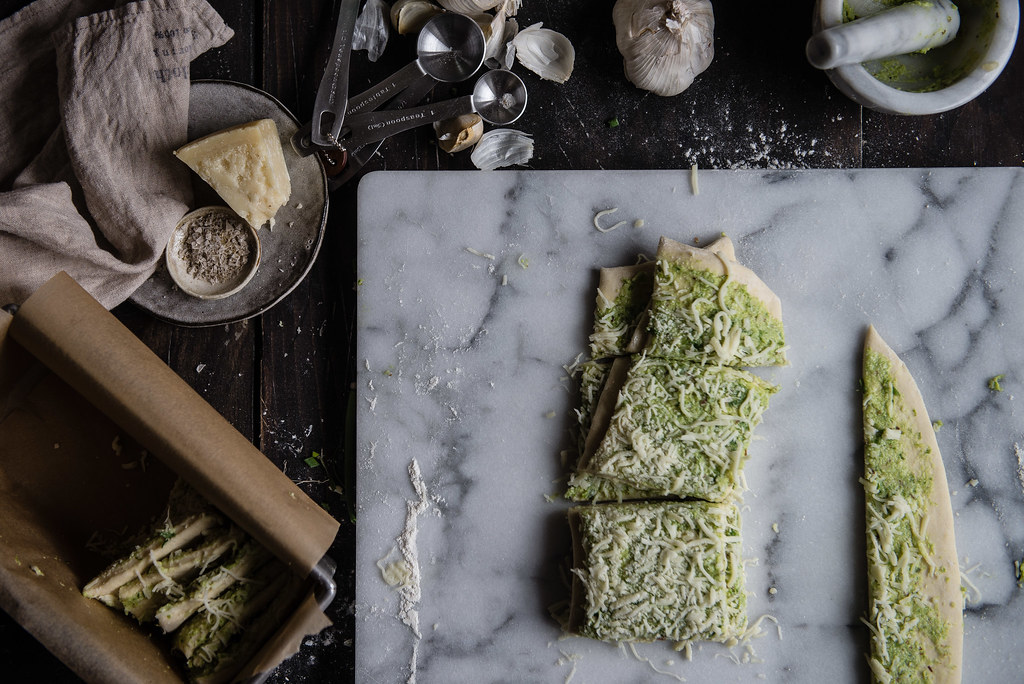 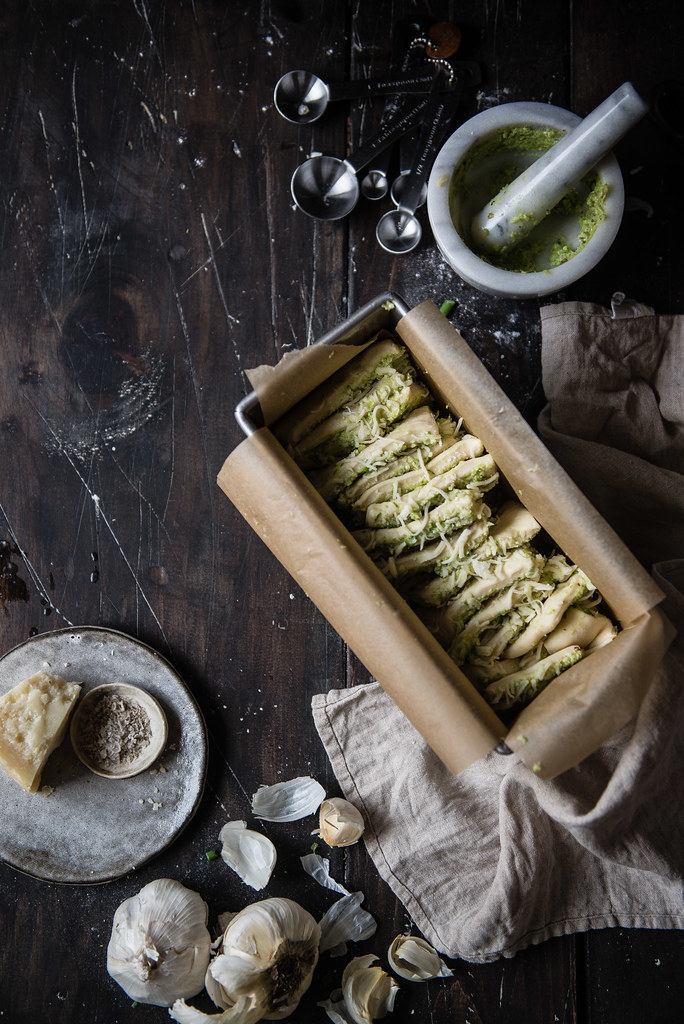 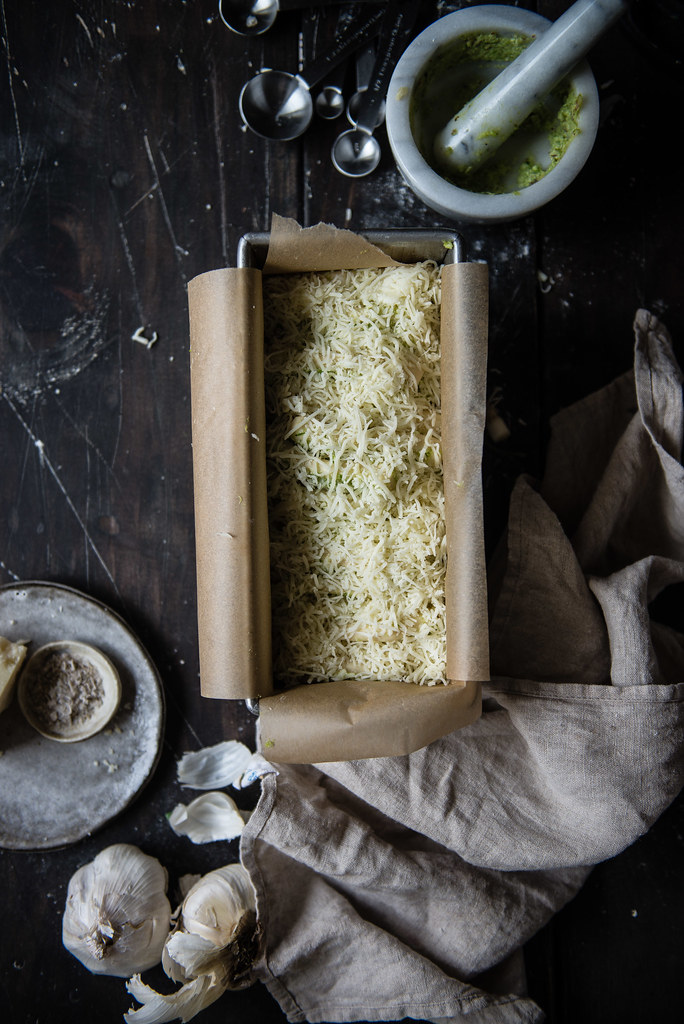 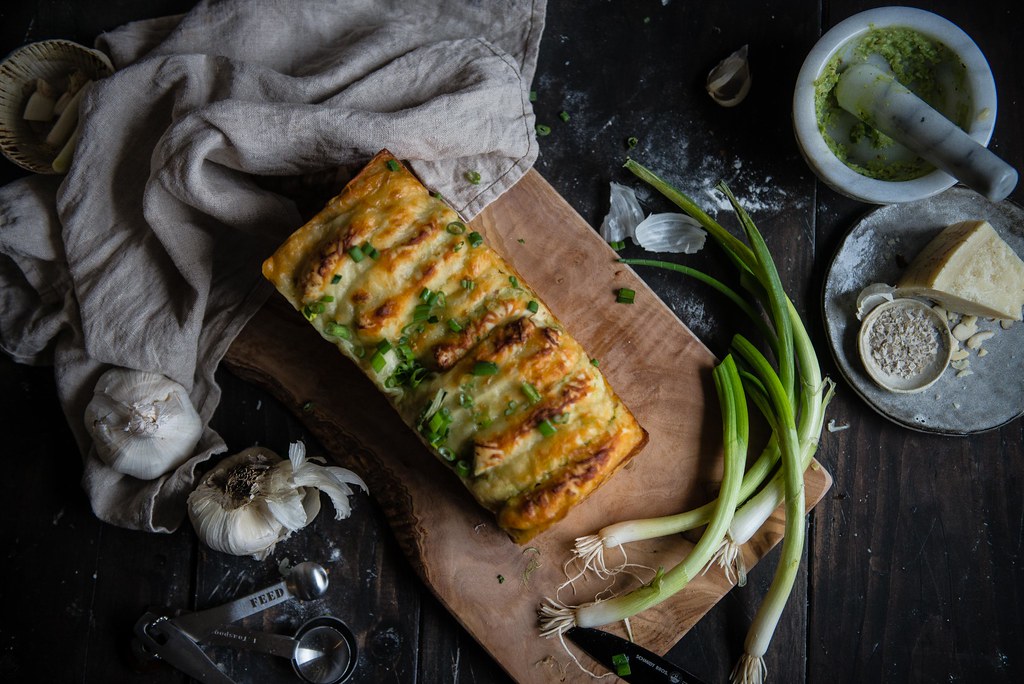 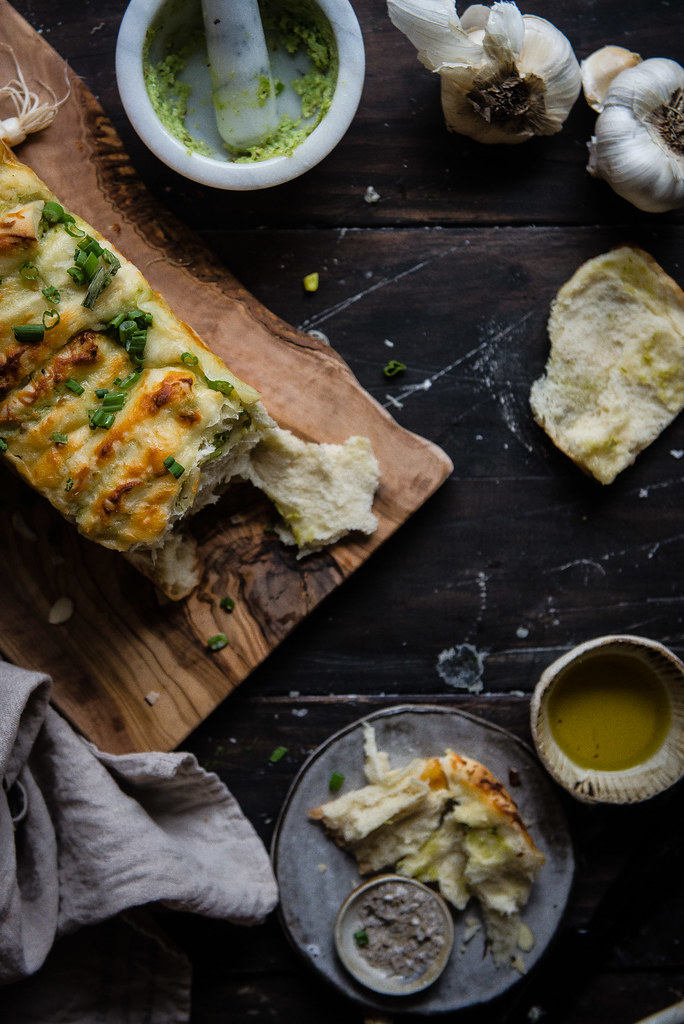 The products in this post were provided by West Elm.  You can find the sources for the cheese board, mortar and pestle, marble slab, and more on their blog here.  Thank you so much to West Elm for sponsoring this post!

Inspired by Kelly at Just a Taste. The dough based on this Hokkaido milk bread. And you can find a scallion pesto version here!

If your milk doesn’t foam and your yeast is fresh, it might be because the milk isn’t ultra-pasteurized — discard and start over, but this time, heat the milk to just under boiling to scald it, then cool it down to lukewarm and proceed. Supposedly this denatures any proteins that might be inhibiting the yeast.

If not measuring the flour by weight, be sure to fluff it before scooping to get the most accurate measurement. I generally spoon the flour into a cup and then level.

If letting the dough rise overnight, take care not to seal the bowl completely airtight, which can sometimes result in a build-up of gas and an alcohol-like smell. I generally wrap it lightly in plastic wrap and then again with a tea towel.