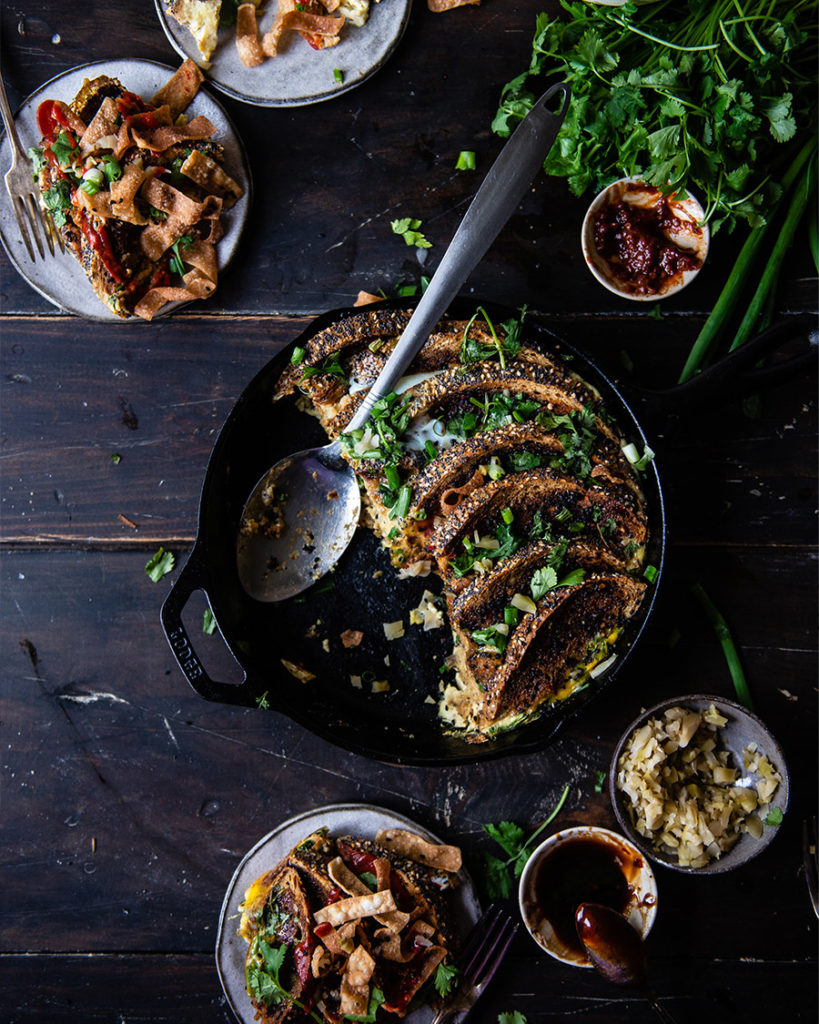 There is room yet for cinnamon rolls and cookies and hot chocolate on our Christmas morning breakfast spread, and I have plans aplenty to make all of these between now and Tuesday.  But this strata, a little bit eccentric but a lot a bit amazing, has just muscled its way onto the table.  I vaguely recall first learning of jianbing, the street cart phenomenon originally from Shandong and Tianjin, from Mandy at Lady and Pups–apparently, more than three years ago!–but it wasn’t until last fall that I first tried it in person, in all its saucy, spicy-and-savory-yet-a-little-sweet, chewy-yet-crunchy complexity.

There are variations galore, but at its essence, jianbing is something like a stuffed crepe, where the crepe is made with a nutty mix of flours that can include anything from mung bean or buckwheat to millet and soybean, spread with a thin layer of egg and a vibrant mix of sauces like sweet bean sauce, hoisin, and chili sauces, stuffed with bright greens like cilantro or scallions, and, most excitingly, folded around a crackling, fried wonton skin-style cracker or, depending on where you are, youtiao.  The result, full of flavor and texture and nuance, is nothing short of a modern miracle.

Of course, because the name of the game around here is always how do I eat this, but easier and without leaving my house, I’d never set out to make something like jianbing at home until recently, when contemplating how much I liked the idea of strata for Christmas breakfast.  What about jianbing strata?  Of course, a crepe sandwich a custardy, bready casserole does not make, but a little imagination here goes a long way–a casserole that borrows all these magical flavors and textures was still everything I hoped for and more.

Here are the parts that make a whole far greater than their sum:  First, a nutty, seedy bread with some rye or buckwheat in it adds heft and mimics the savory earthiness of the crepe batter.  Each slice is smeared with a combination of hoisin and spicy doubanjiang, which I found was my favorite combination of sauces for a balance between subtle sweetness and savory-spicy punch.  Sprinkle that with fragrant cilantro, scallions, and a bit of pickled mustard greens, then layer it with the egg batter (the night before, if you like!) and throw it in the oven, no fussing with crepe pans needed.  In the oven, using a heartier whole grain bread means the top gets nice and crisp, reminiscent of its namesake, while hiding eggy, bouncy but custardy innards underneath.  Finally, best of all, right before you eat it’s all buried under crispy wonton wrappers and still more fresh herbs, and the result is all the complex, surprising interplay between soft and crunchy textures, sweet and savory flavors from the hoisin and egg (and ham or bacon, if you like!), brightness from the herbs and heat from the spicy chili paste, that you’d never guess this was the easiest thing since the sliced bread it’s made of.  And does it just happen to be red and green and perfect for the holidays?  It sure does.

Happy happy holidays to everyone celebrating!  I hope it’s filled with everything nice and more. 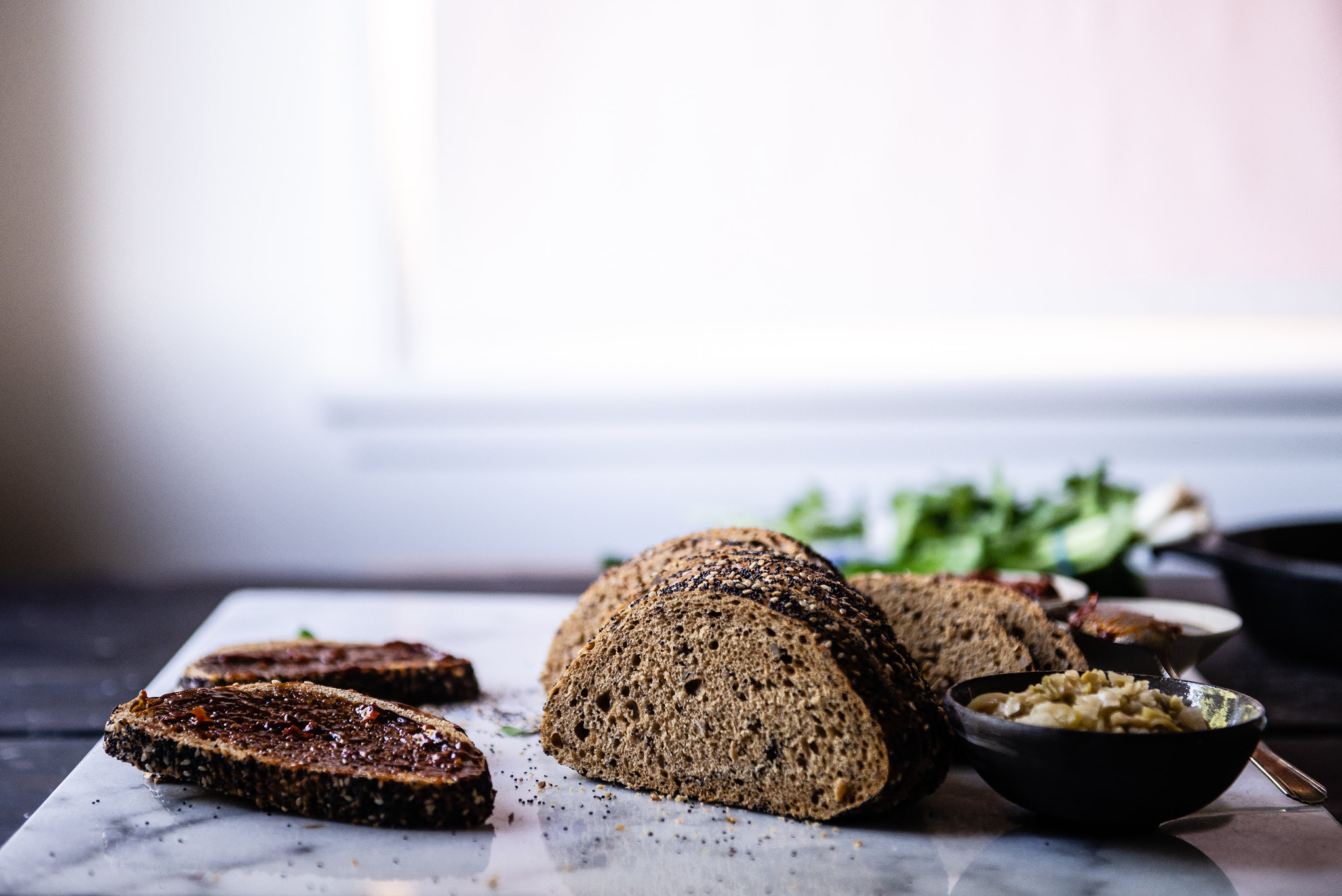 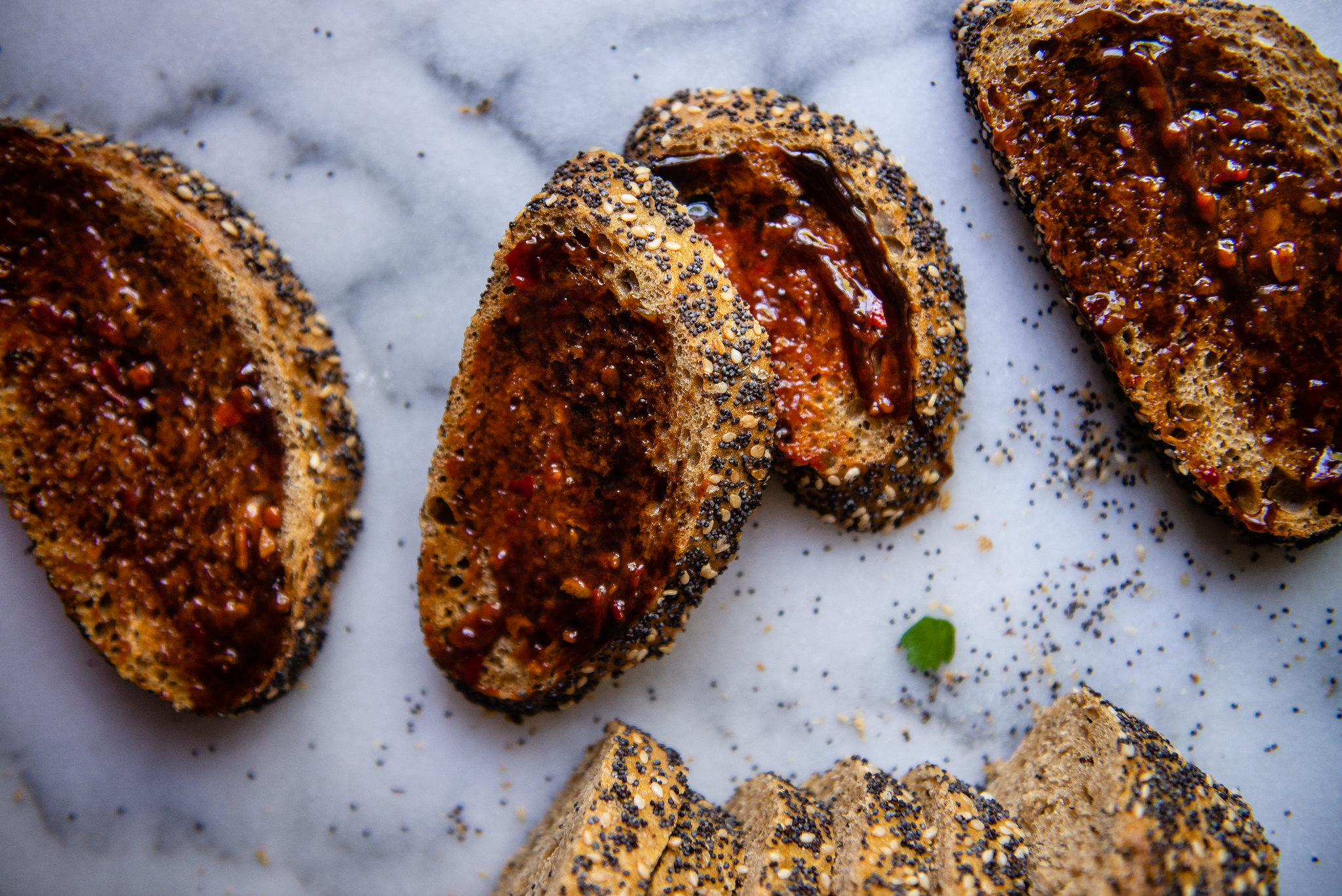 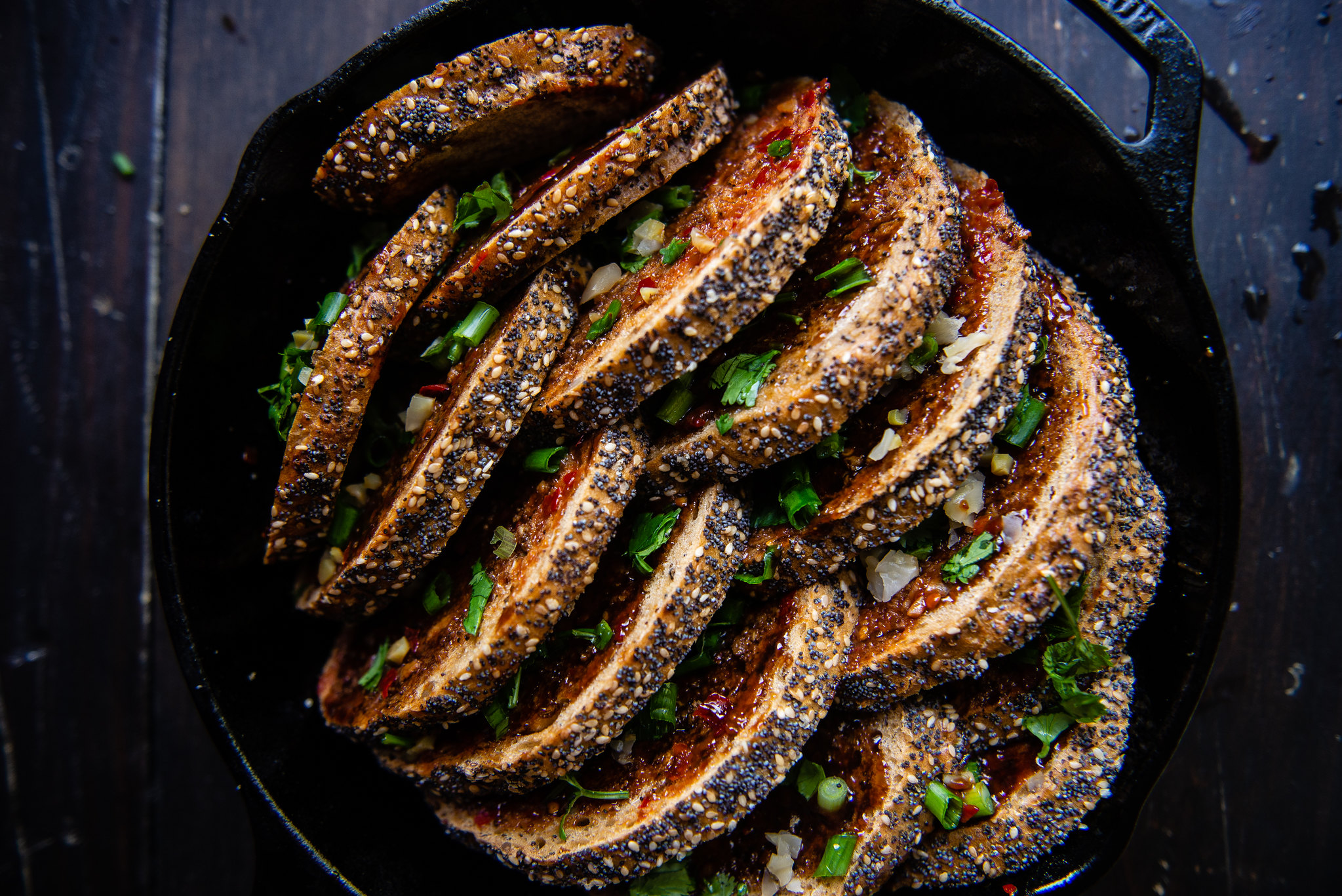 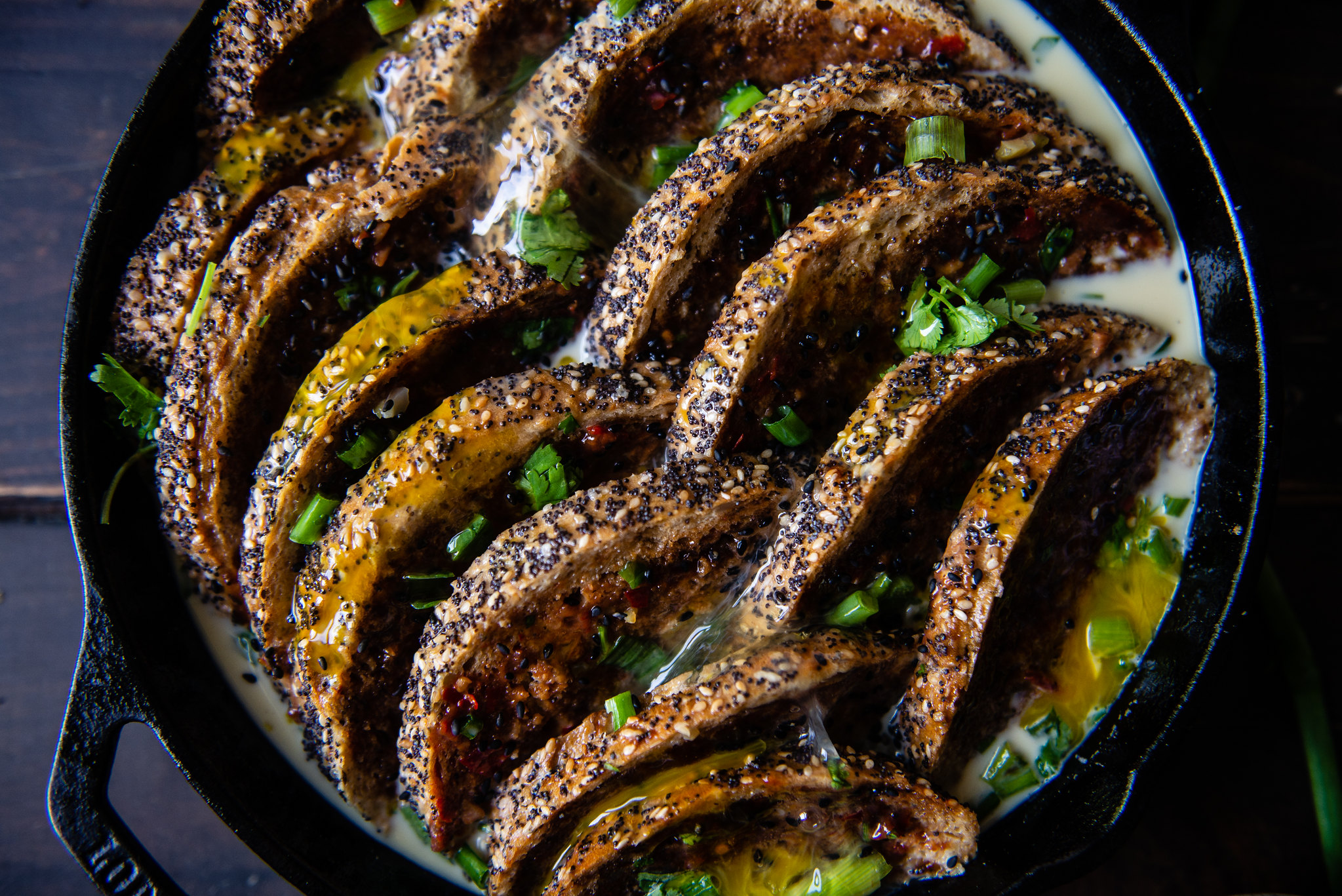 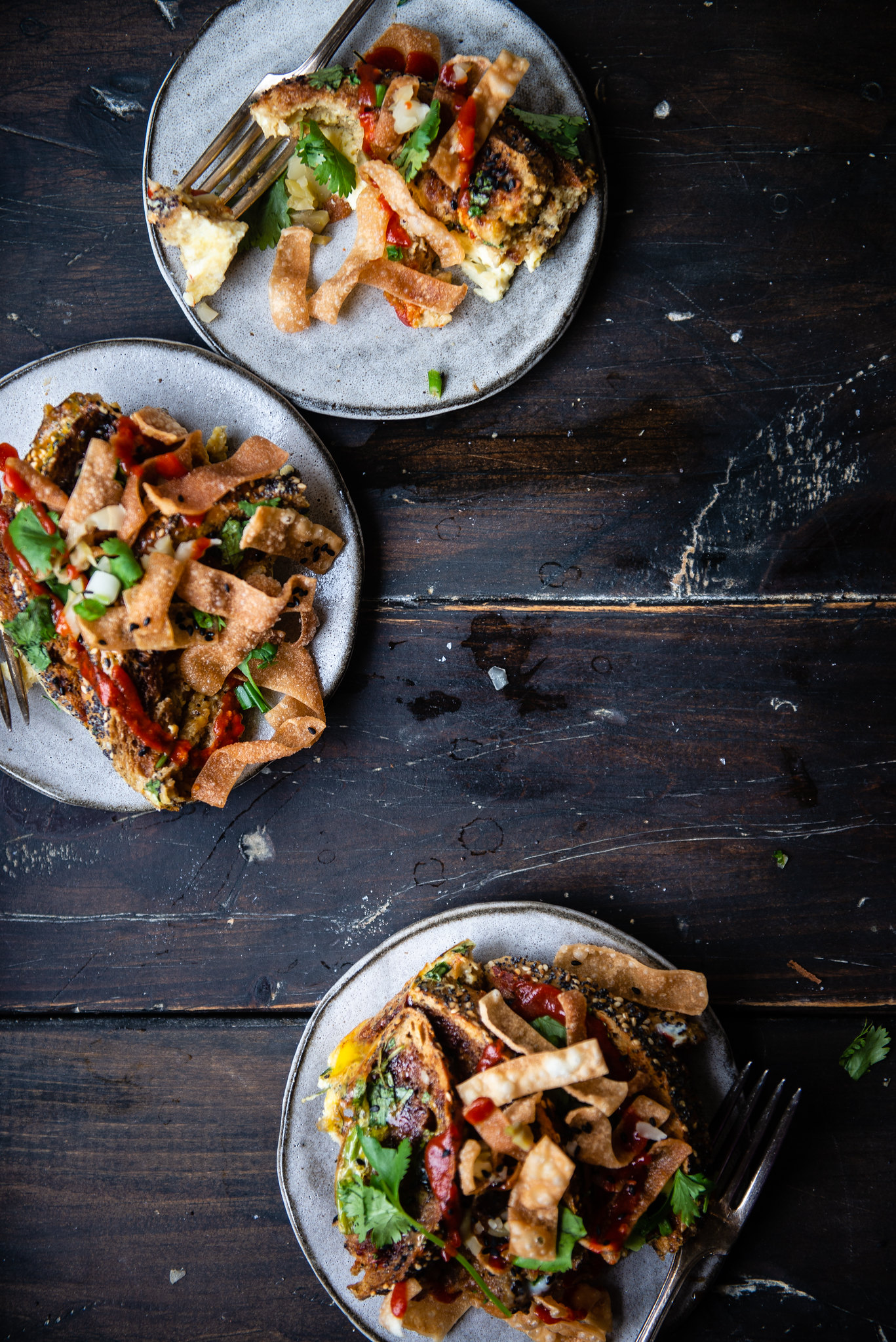 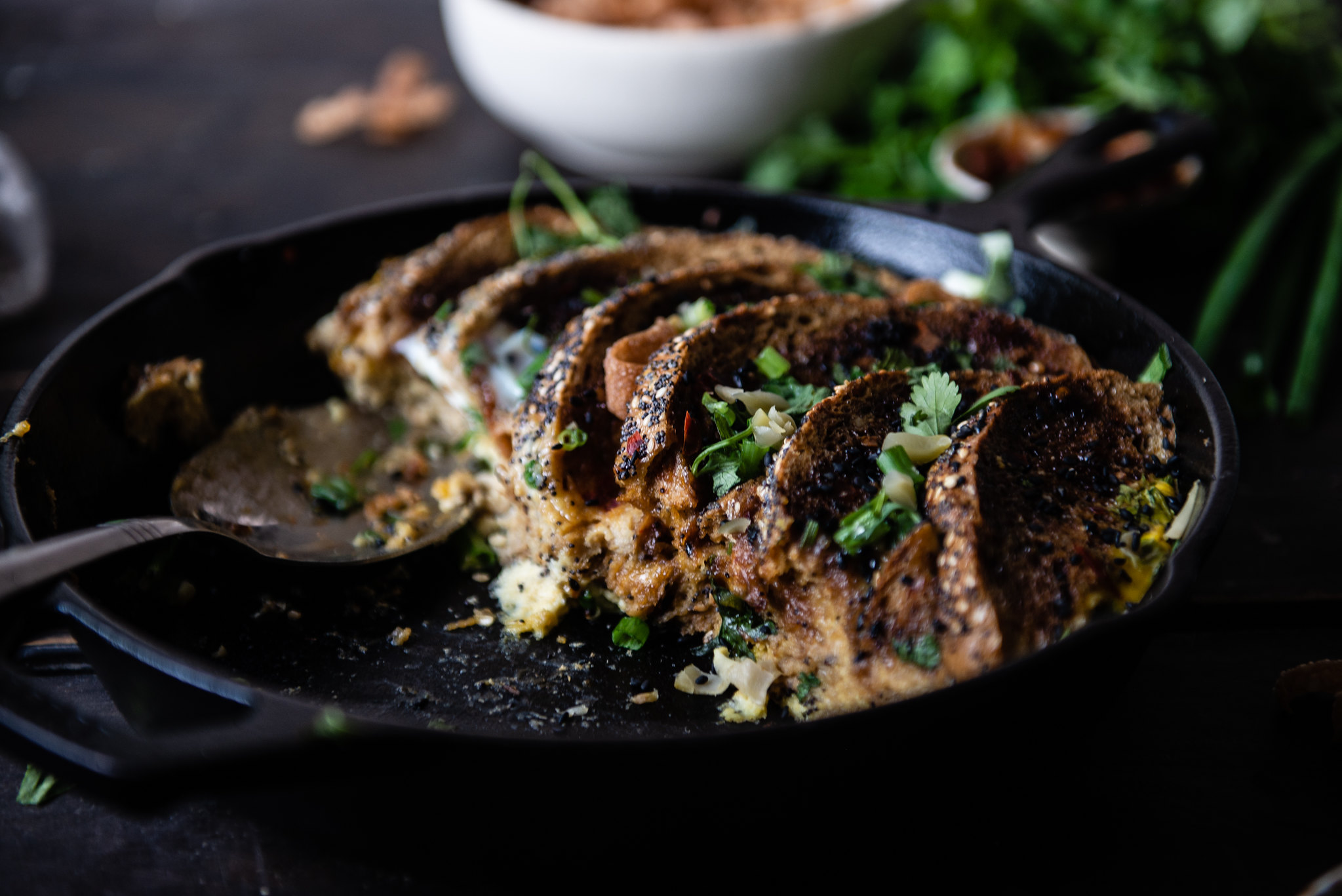 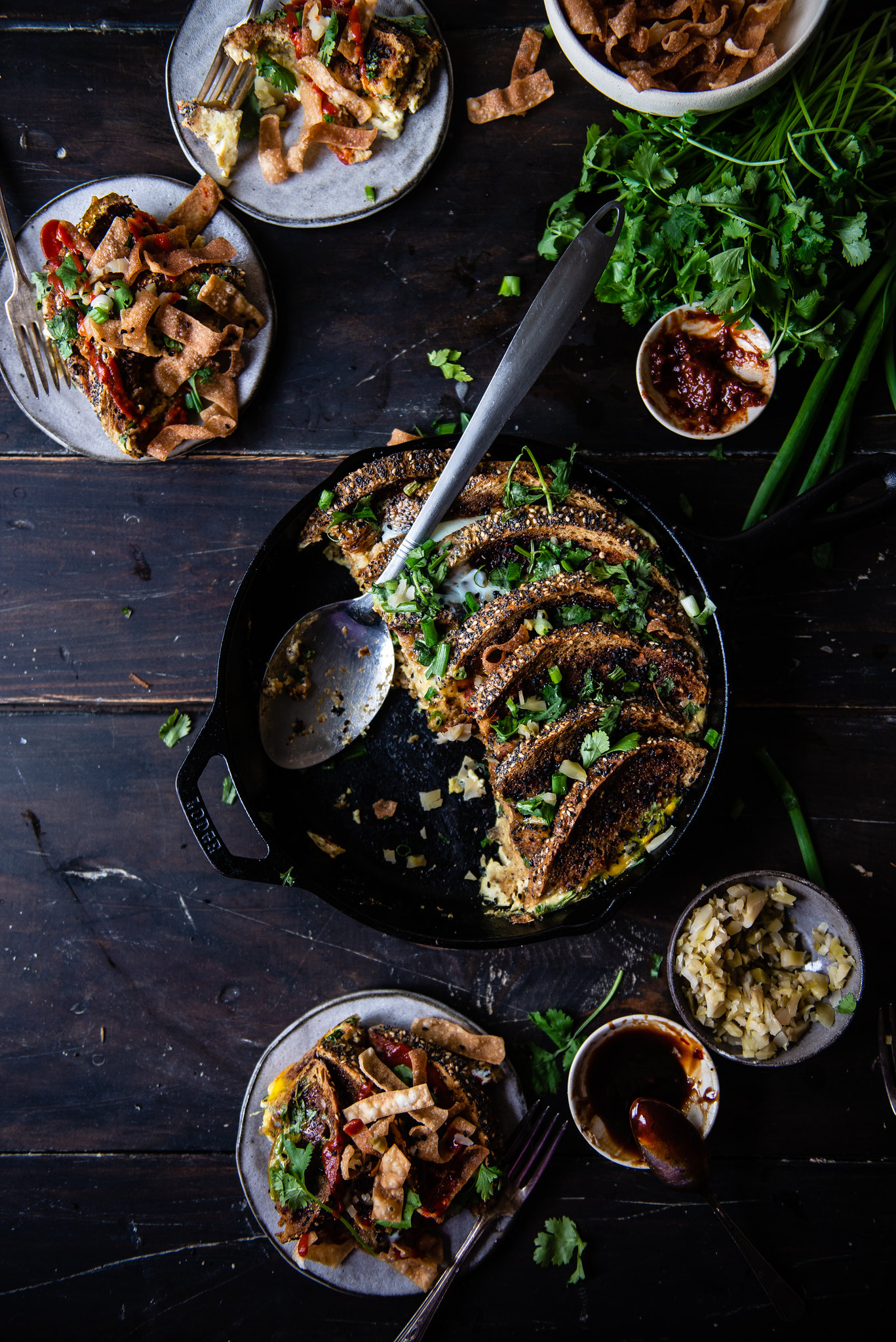 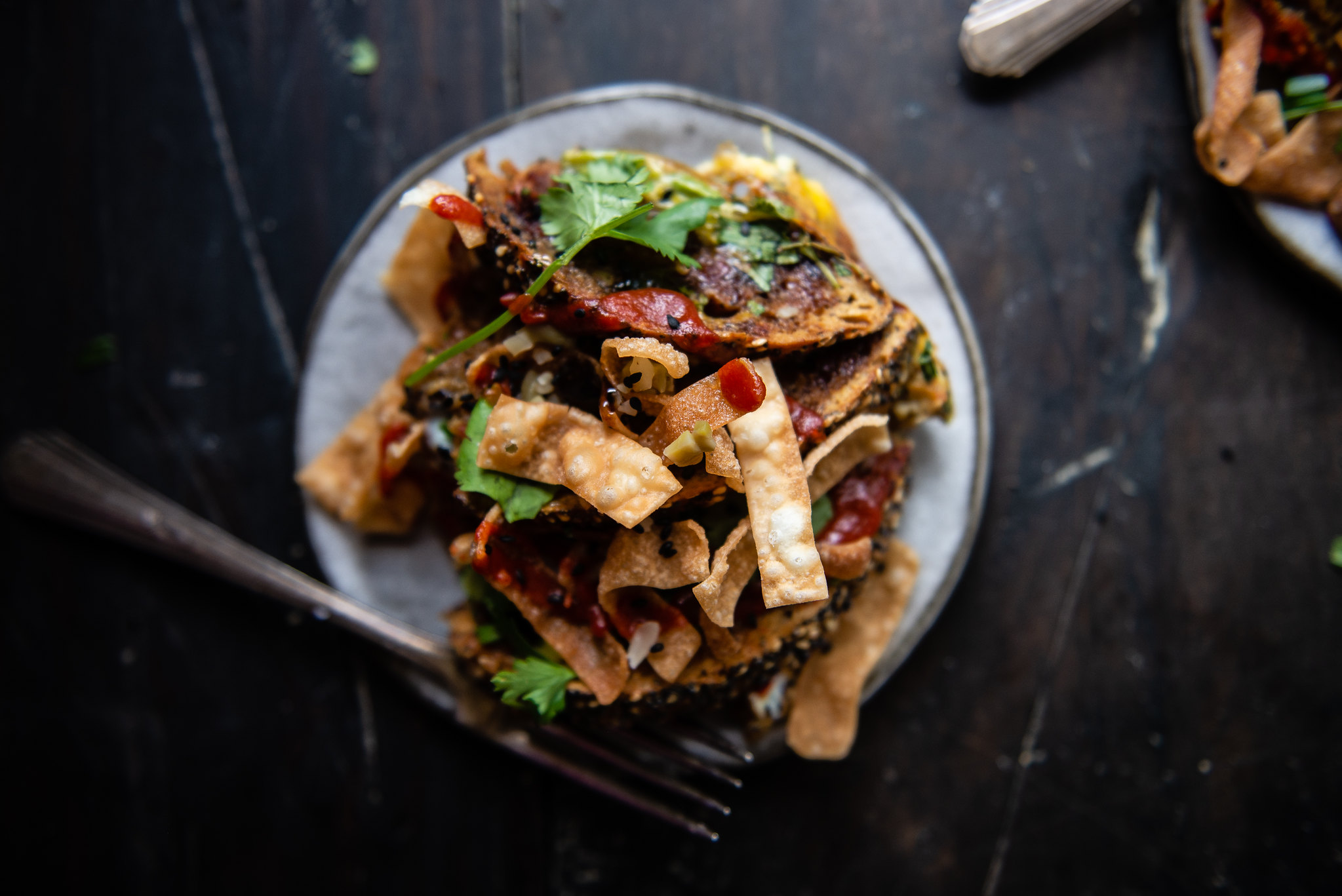 Just like its namesake, this strata lends itself to all sorts of adaptations and variations. Try a bit of tianmianjiang instead of hoisin, add some crushed peanuts or a light smear of natural peanut butter, use leftover roast pork, the world is your oyster.

Frying wonton wrappers is incredibly easy. Just slice them into strips, heat an inch or so of oil (you don’t need much for this) to around 360 degrees–or hot enough that one strip bubbles energetically when dropped into the oil–and fry a batch at a time, taking care not to crowd, for a few minutes until golden brown. Or, do like Mandy, and just use potato chips!