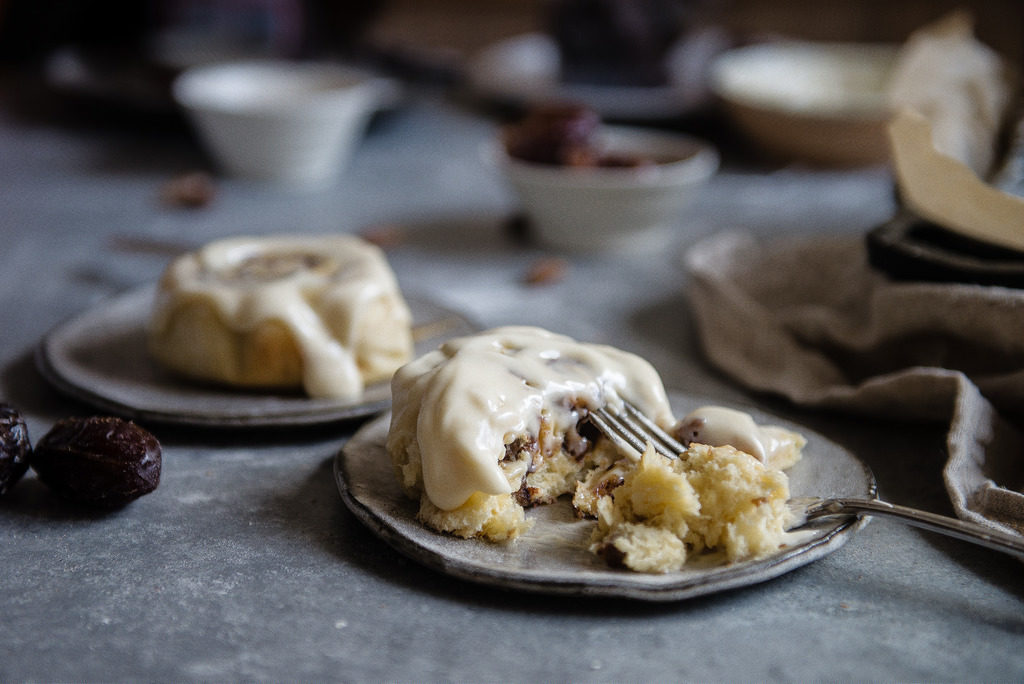 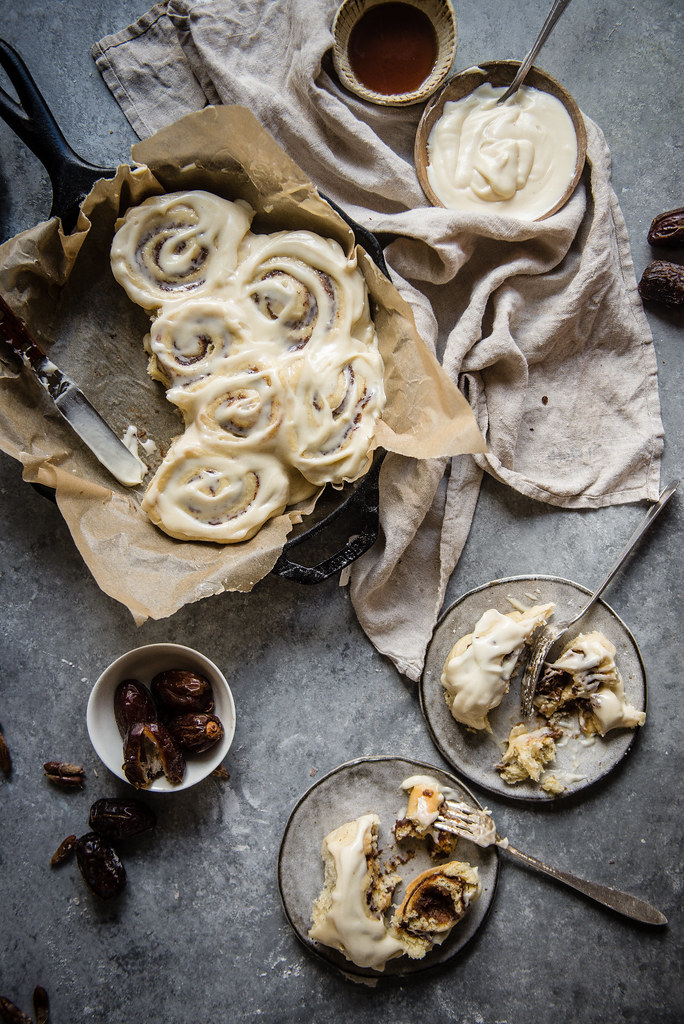 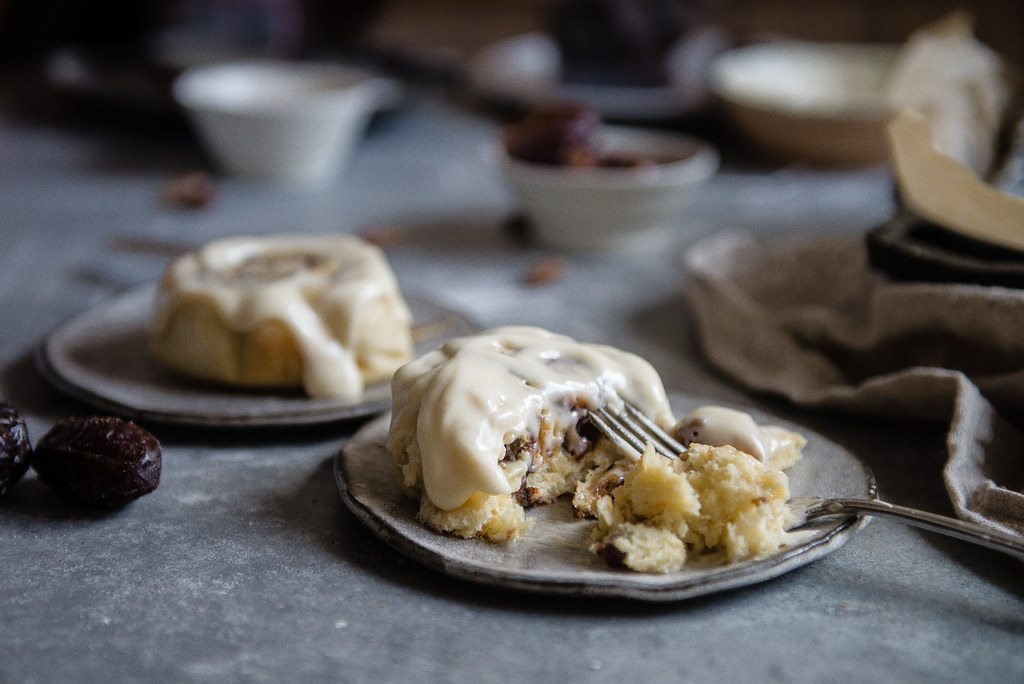 Hi friends! How was your Thanksgiving? We spent ours with my parents and my brother last week, in a couple of slow, wonderful days at home. It was pretty exciting — we sat around and told the same stories for the eighty-seventh time each, I woke up way earlier than you’d ever usually find me so that I could have sleepy coffees with my dad, my sole responsibilities at any given point were not overfilling the wonton wrappers (I failed) and making sure my mom got a Black Friday discount on a jewelry box from J.C. Penney, and my little brother drove me around everywhere because I’m very lazy and he’s nice and he “misses driving anyway.” So actually it was zero percent exciting. (But one hundred percent awesome.)

And now we’re back in New York! I’m always a little forlorn when I say goodbye to my family, but the good thing about this goodbye is that it’s after Thanksgiving, which means Christmas baking, which means cinnamon rolls, which means the best thing ever. And you cannot be gloomy when you have cinnamon rolls. That’s just science. Especially these sticky date cinnamon rolls, which I love more than I have possibly ever loved any squashy, warm, spiced baked good. For a long time I thought there was just one ideal of the perfect cinnamon roll, but slowly I’ve come to suspect differently — there are ones that take after brioche, with a distinct buttery richness in the dough; ones that are soft but nearly cake-like; ones with a thin, translucent sugar-sweet glaze and ones with thick, tangy, must-be-spread frosting. What I think of when I imagine my own dream cinnamon roll (or, in other words, the one I dreamed of when I was 10 and in the airport and woefully longing for a Cinnabon) is exactly how these came out — feathery-light, gooey, and barely on the right side of baked; so dangerously squishy that they yield instantly under a fork, but still more reminiscent of the very softest dinner roll than cake, with just enough gluten to have a little chew. They’re blanketed in a cream cheese frosting that’s somewhere in between the two poles of thin glaze and thick spread, pourable but in thick dollops and ribbons, not too tart but not tooth-achingly sweet.

And then there’s the date filling — as promised, the return of my much-loved dates! They’re the only thing that makes these different from the cinnamon rolls of my childhood, but now that I’ve tried them, I’m convinced dates make an even better vehicle for that warm, toasty cinnamon than brown sugar and butter. After my last post on them, I don’t know if it’s possible to wax any more lyrical about how much I love dates, but the rapture continues, and this filling is everything I love about dates encapsulated — sticky, moist, and soft, full of comforting, sweet molasses-y warmth, just like a good, plump date should be. It has all the gooey decadence of a traditional cinnamon roll filling, but with a more nuanced flavor and a bolder, more substantial texture, not to mention just a smidge more healthfulness. In my mind, this is kind of like a cross between a Christmas date cake and a classic Christmas-morning pan of cinnamon rolls — good enough for me to make on the very first day I could claim it was time for Christmas baking (and potentially way before that … I admit nothing) and then to make umpteen times more before December 25th. They’re peaceful, slow, easy baking, for a result that’s pure comfort and holiday warmth, and they remind me of all that I love about family and this cozy time of year. I really hope you enjoy them as much as I do. And if you celebrated last week, I hope you all had wonderful Thanksgivings! 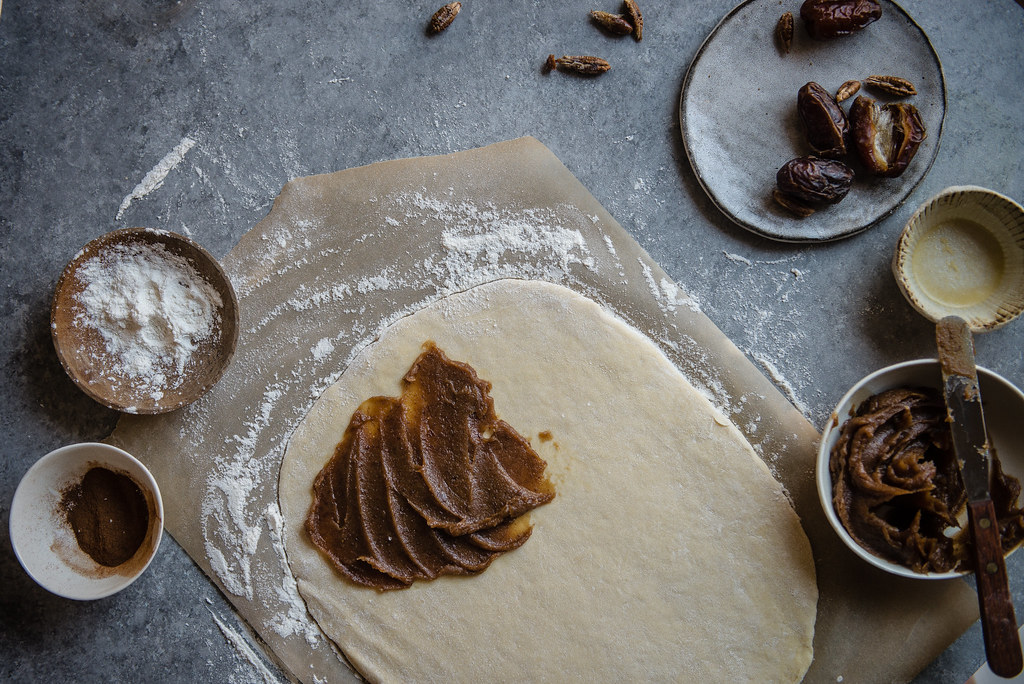 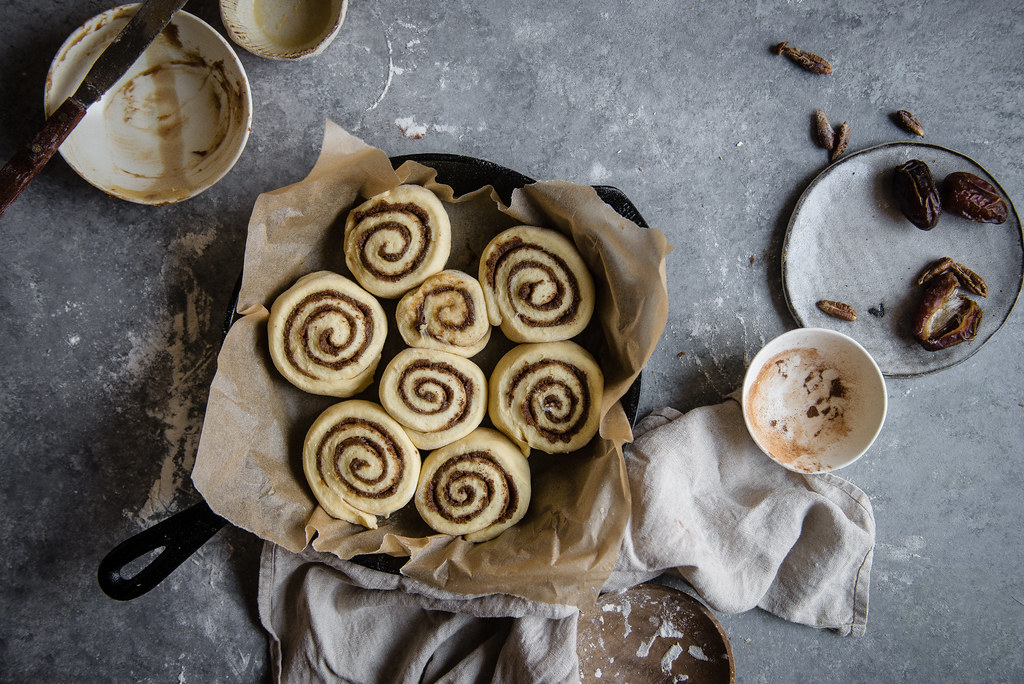 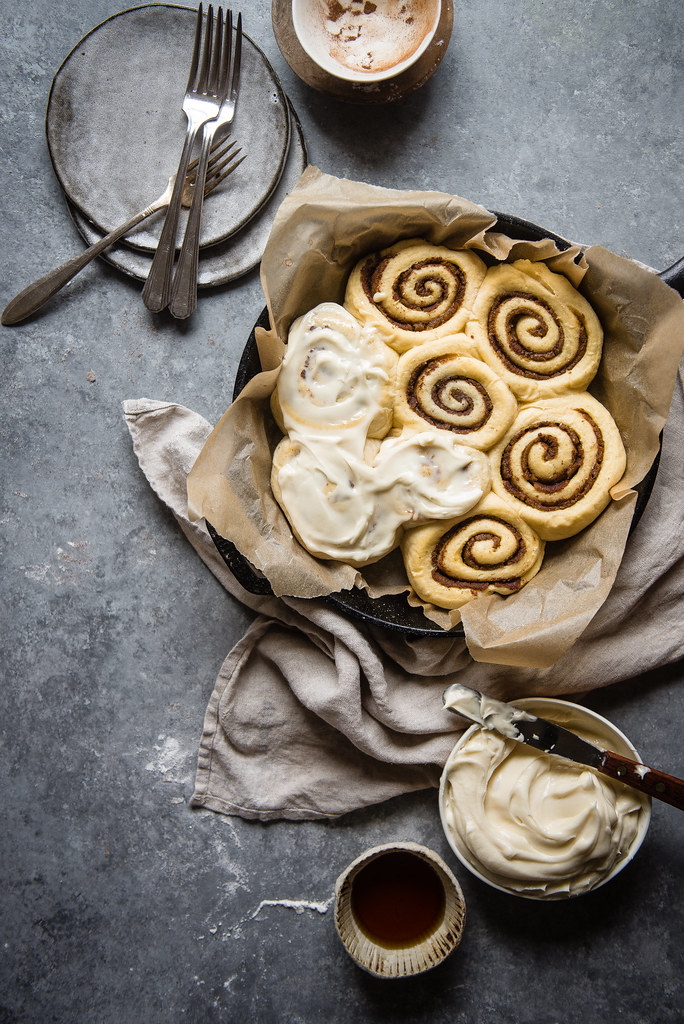 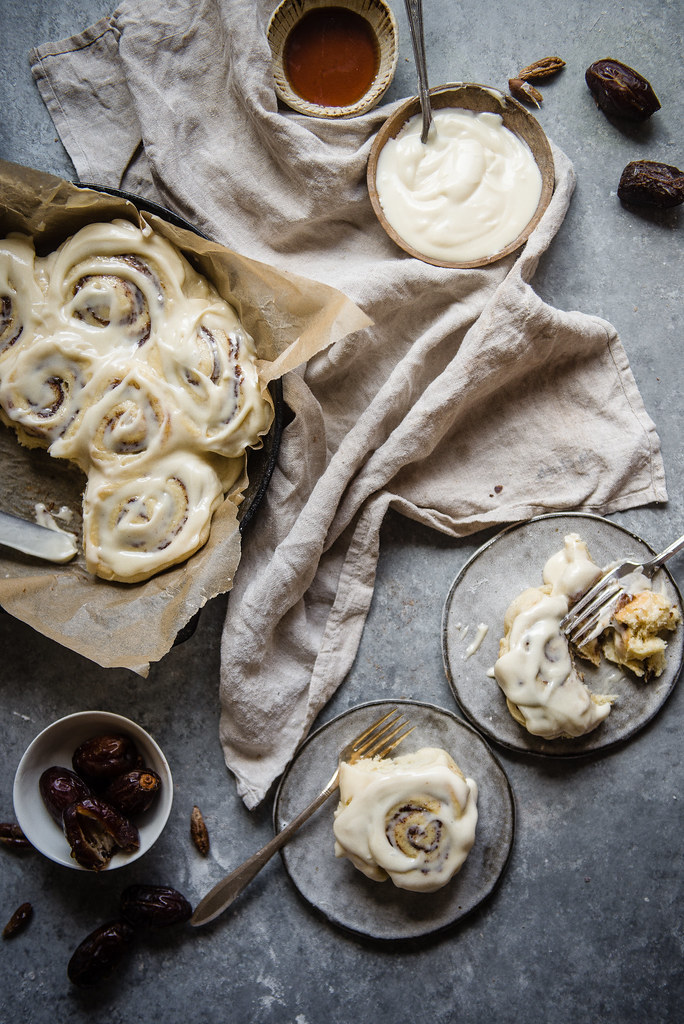 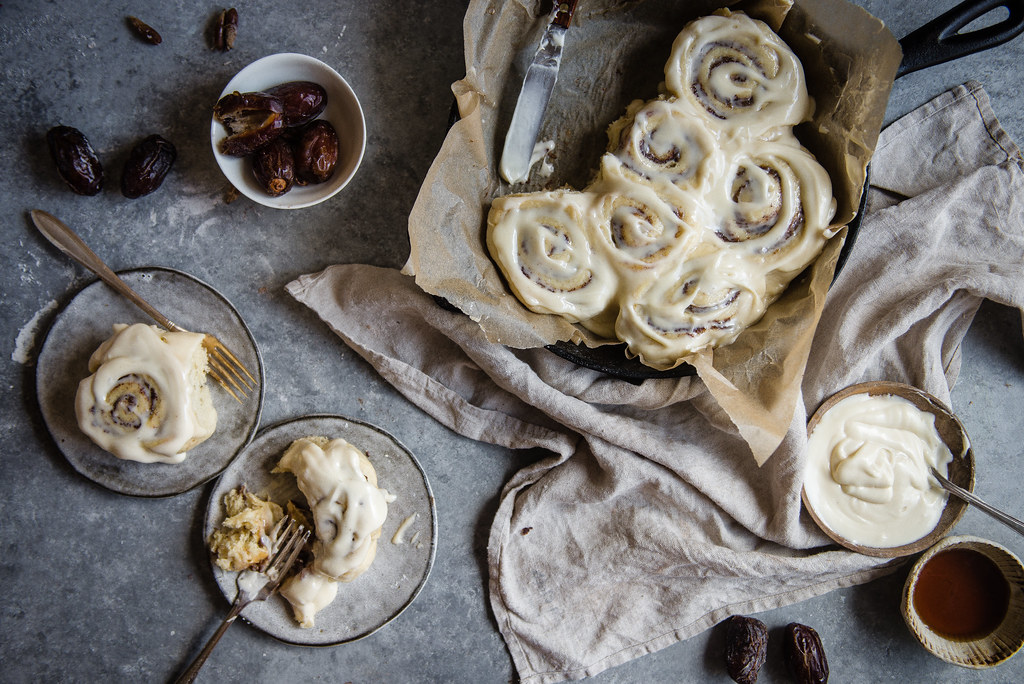 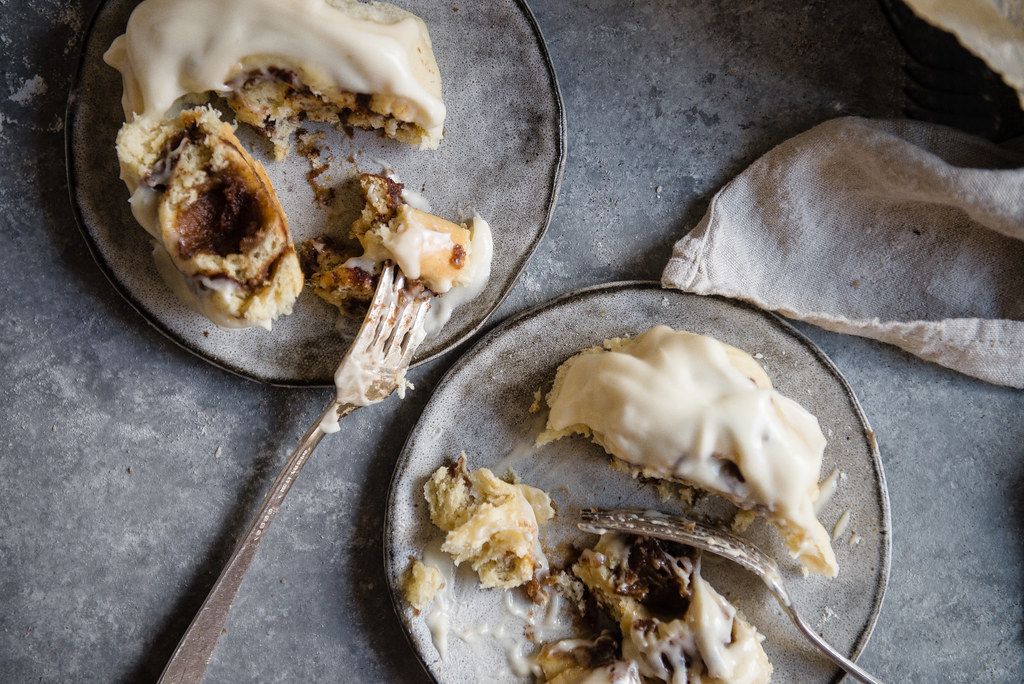 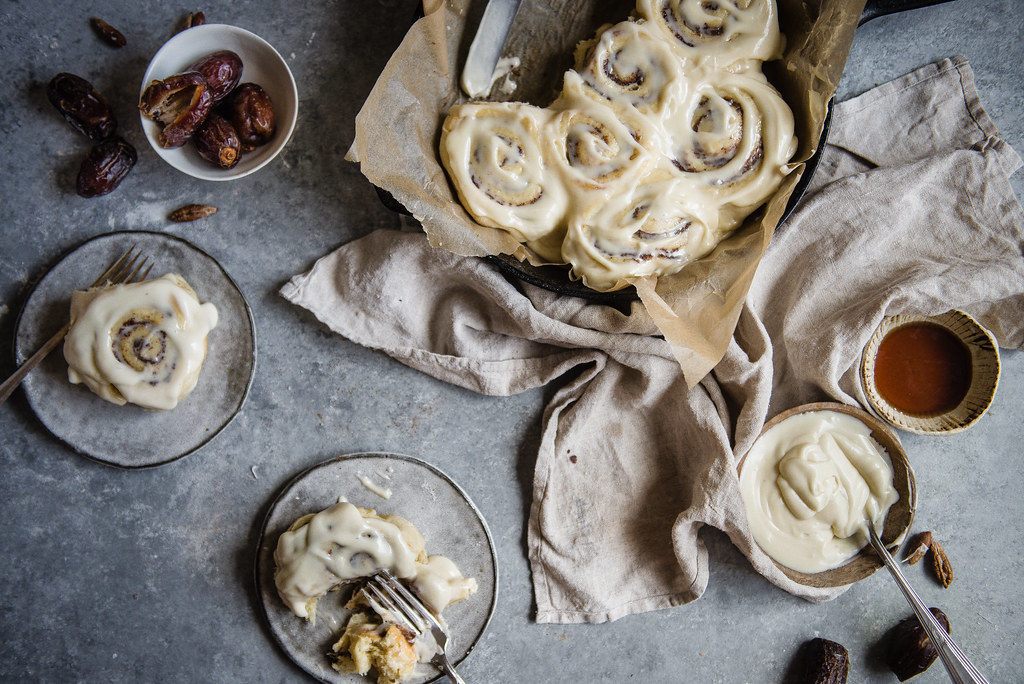 If you’re finding good dates hard to come by, Nuts.com will deliver them in bulk and I’ve always found them to be delicious when I’ve ordered from there. (If you want to try something other than Medjool, I love their Khadrawi and Honey dates!) And just in case you have a hankering for a full-on traditional cinnamon roll instead, see the Notes below for a standard brown sugar, butter, and cinnamon filling.

For a traditional cinnamon filling, use 4 tbsp (1/4 cup, 2 oz or 1/2 stick) softened butter, 1/2 cup packed brown sugar, and 1 tbsp cinnamon. Spread the butter over the dough, then sprinkle the brown sugar and the cinnamon evenly over top.

If your milk is having trouble foaming and your yeast is fresh, it might be because the milk needs scalding first. Heat the milk until it just bubbles at the edges but does not boil, then cool until just warm to the touch. Add the yeast and see if it foams this time, then proceed as normal.

For Christmas: If you’d like to bake these first thing in the morning on Christmas Day, here’s what I’d do!

10 AM, Christmas Eve: Make the dough on Christmas Eve morning around 10 AM. Let rise in the refrigerator for 8-10 hours, or until doubled.

8 PM, Christmas Eve: On Christmas Eve … eve, make the filling, roll out the cold dough, shape, cut, and place into the baking pan or skillet. Let rise in the refrigerator again, covered well, this time overnight.

Christmas Day: On Christmas morning, let the rolls sit at room temperature for about 15-20 minutes while the oven preheats, then bake as directed, make the frosting while they bake, and enjoy warm, with a side of presents. 🙂