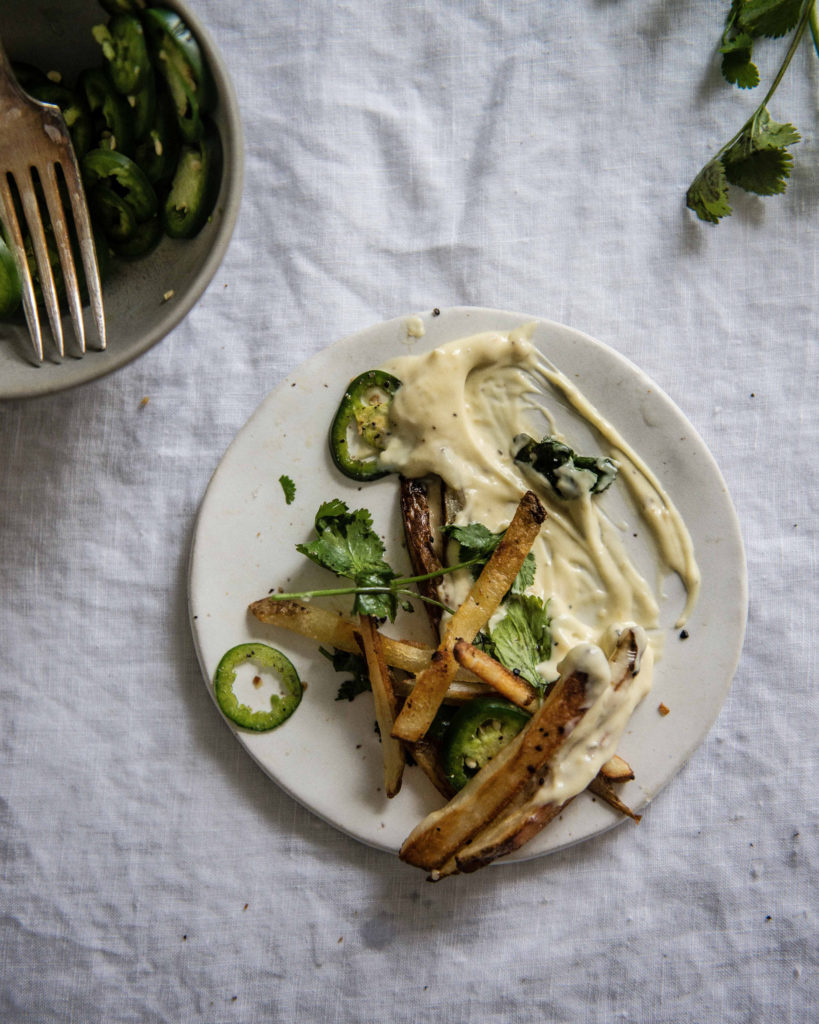 The calendar tells me that it has been more than one month since I was last here, which feels both much shorter and much longer than the reality (as always seems to be the case).  The biggest event of the last month for us, though, is definitely this:  We are now officially the proud parents of a bona fide, honest-to-goodness toddling toddler.  Our little man can walk!  A few weekends ago, B3 graduated from his half-lunging, half-toppling three-step walk to teetering halfway across the room on his own, and in the last few days he’s been making his way around the entire apartment–usually with both fists up, his belly stuck out, eyes opened as wide as they will go, and mouth open in a grin like a manic puppy.  It is the craziest thing.  If someone could bottle up the giddiness you get from looking up to see your previously quadripedaling baby suddenly wobbling towards you on his two feet, no one would ever have a bad day again.

The other big piece of news (for me, though very boring for you) is that I’ve joined a new case at work.  It’s one of the biggest cases I’ve ever worked on, which has meant some extra-crazy days, late nights, and the fact that, for the first time in recent memory, I’ve been finding the days flying by with an incredulity not born of procrastination.  On a lot of nights I go straight to bed from the computer and can’t fall asleep for a little while because I feel like my brain is still treadmilling.  I would be lying if I said I didn’t feel overwhelmed from time to time, but the team is one of the best groups of people I’ve been lucky to work with so far, and that has made these pellmell weeks, to my surprise, the most I’ve ever enjoyed this job.

Still, the downside is that I haven’t had nearly as much time to spend with B2 and B3 lately.  I can’t complain, not least thanks to heroic B2, who is not only working hard too, but being super-dad and picking up parent duties on top of it.  On most days I can still rush home (i.e. inch home in traffic) to play with B3 for an hour or so before he goes to bed, and then I sign back on to work afterwards.  But some days I can’t, and I may or may not have wallowed in self-pity in my office late one night, having missed Luke’s bedtime a few nights in a row and convinced myself that he was going to love everybody else more than me.  I know, I’m not melodramatic at all.

All that to say, being home a few weekends ago to see Luke take his first belly-first, manic-grinned steps (thanks, sweet boy, for picking a Saturday for us!) was even more awesome than it would have been otherwise.  Now that he’s a year old, I keep thinking back to “where we were a year ago,” and looking at videos and photos of my infinitely chubbier, squishier potato at this time in 2017, who would nap for hours while I rushed around shooting photos for a cookbook (whose manuscript just went to copyediting, eek!) and now is somehow a little boy, who loves “DODIES!!!” (doggies), organizing my Tupperwares, and bouncing up and down to ELO’s “Mr. Blue Sky.”

To my surprise, almost a year ago is when I shot these fries (were you wondering when I would get to the fries?) and, unforgivably, I’ve only now gotten around to sharing them.  Even more unforgivably, the last time I shared any recipe for fries was almost two years ago (in B3’s first appearance on this blog!)  This is a riff off the method in that post–although I’ve noted another one below, also by Deb, of course–but with a neat flavor combination I was captivated by at a restaurant nearby that has very sadly shuttered.  They specialized in burgers and fries with just a touch of Asian influence, and their fries, crisp and golden, piled high with garlic, raw jalapenos, and cilantro, managed to be both classic and flavorful, with a touch of something faintly Korean underneath.  Happily, fries are a curiously wonderful thing that need very little to imbue them with plenty of flavor, which makes them one of those dream dishes that are magically easy to make again at home.  I hope you enjoy these as much as we did. 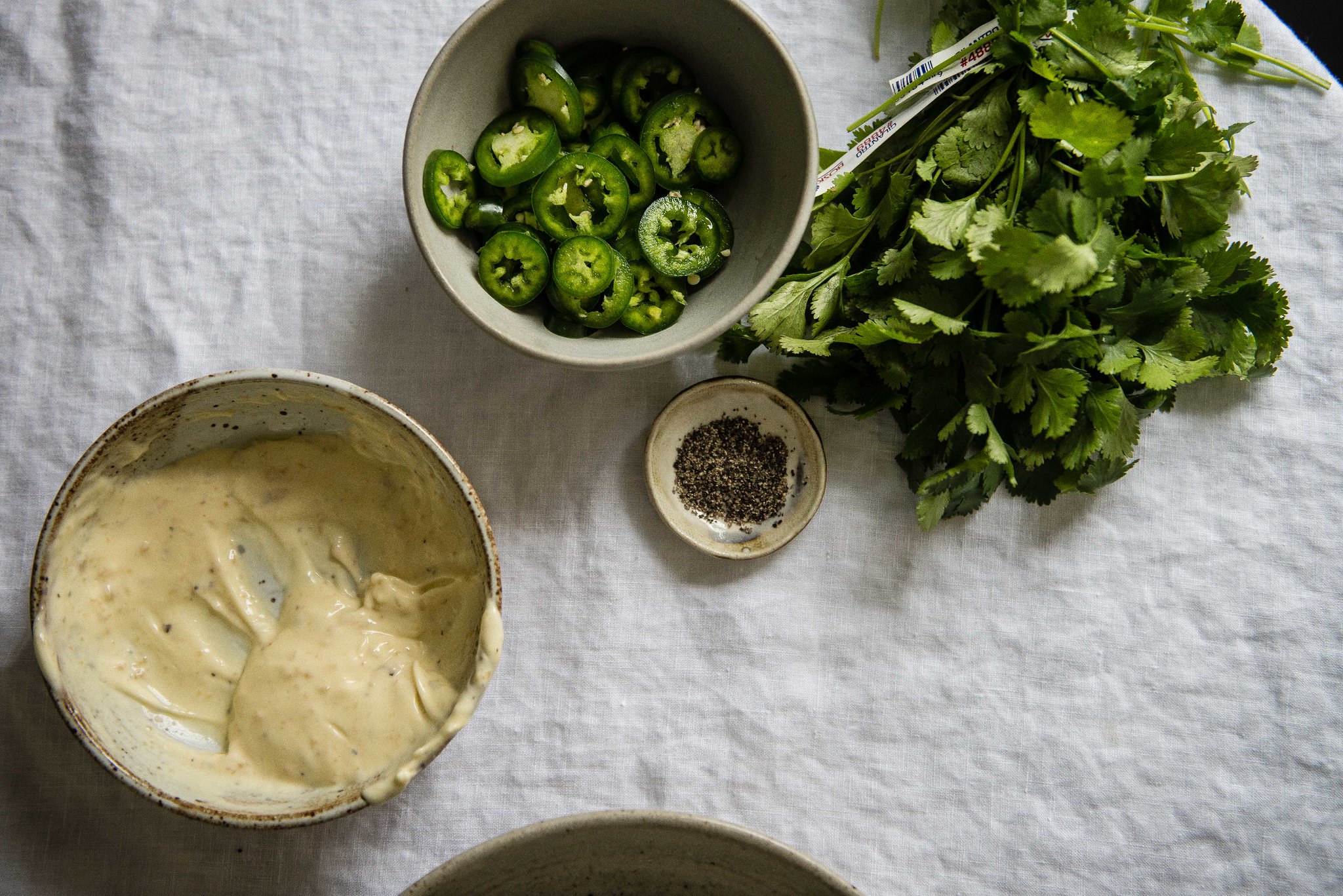 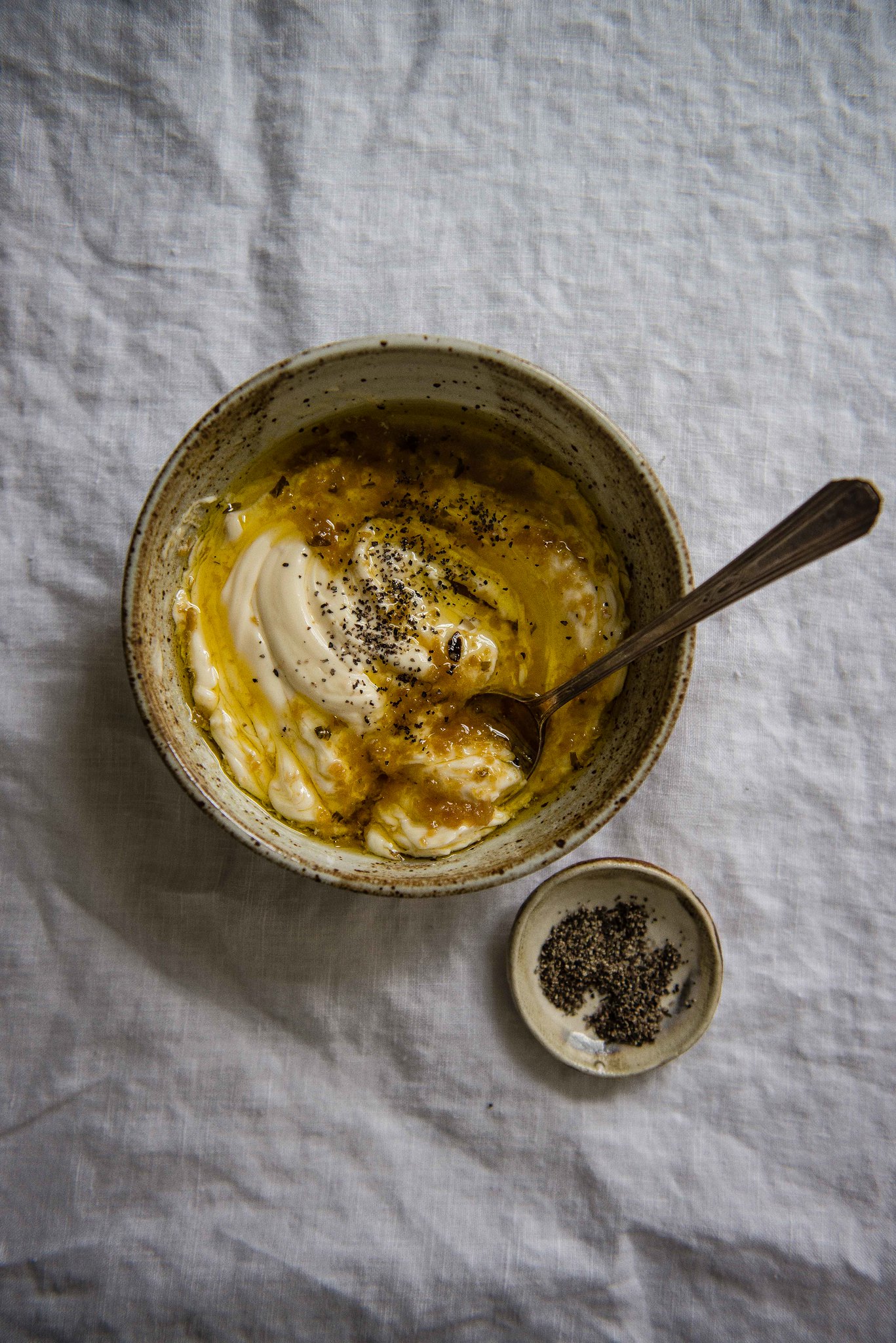 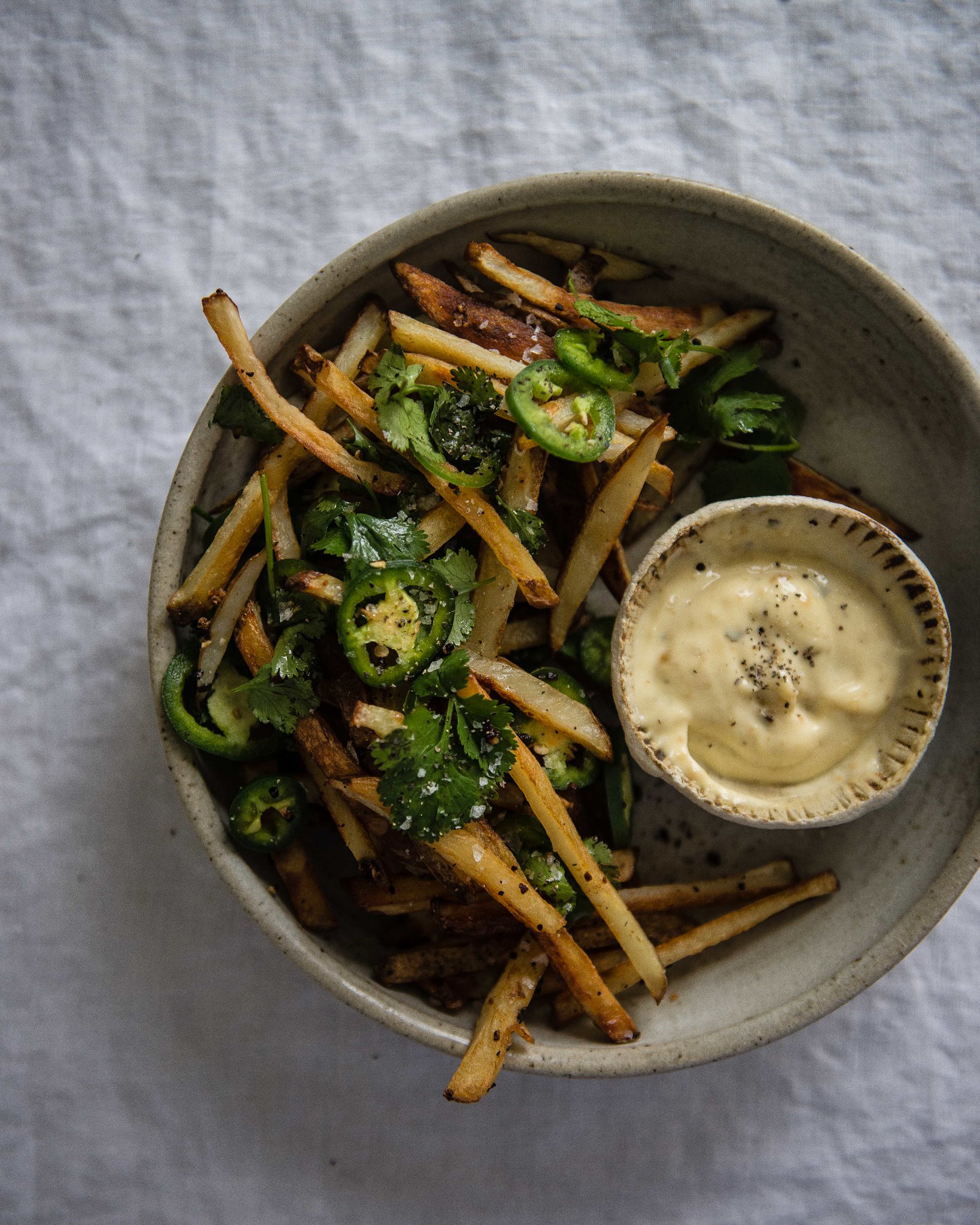 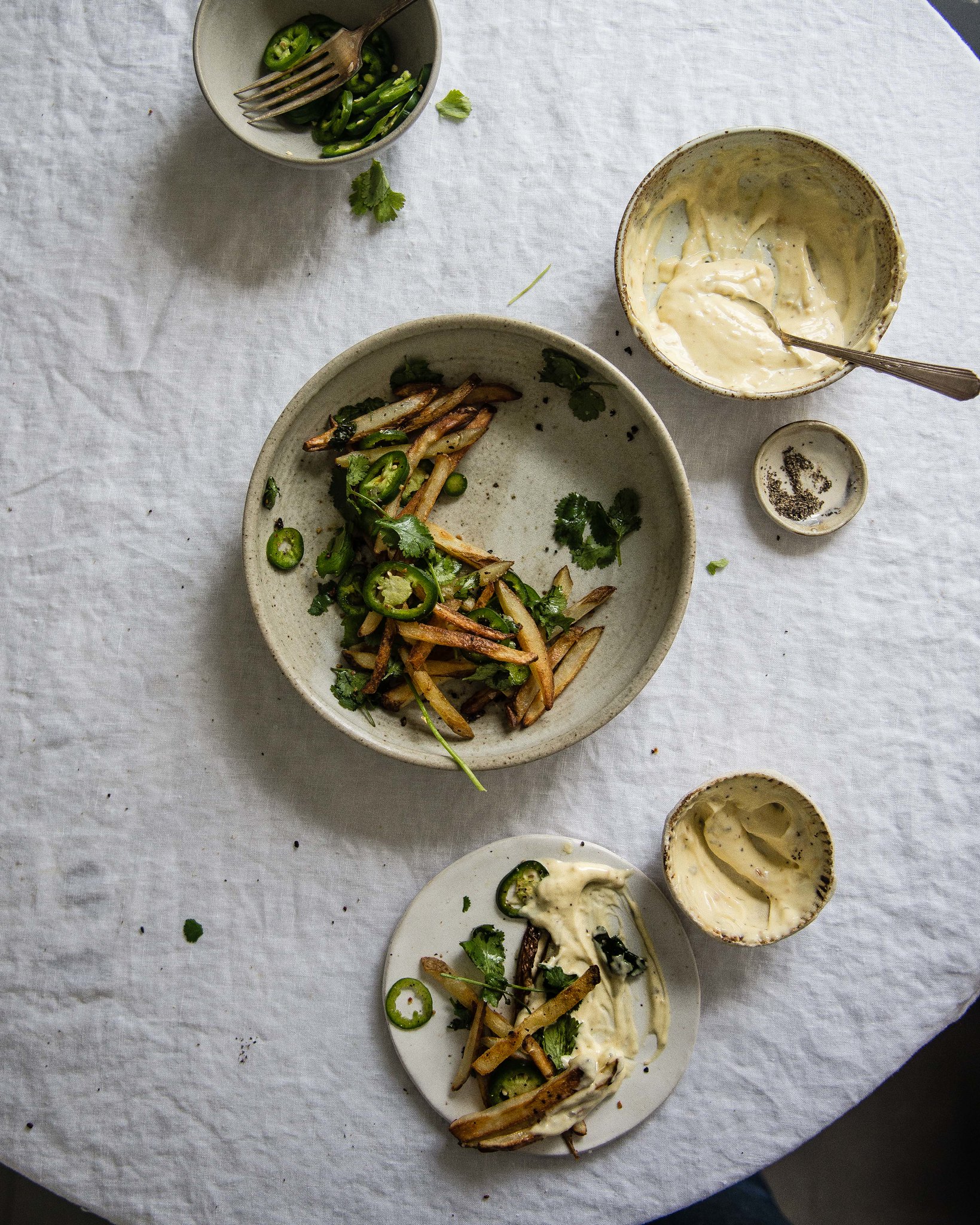 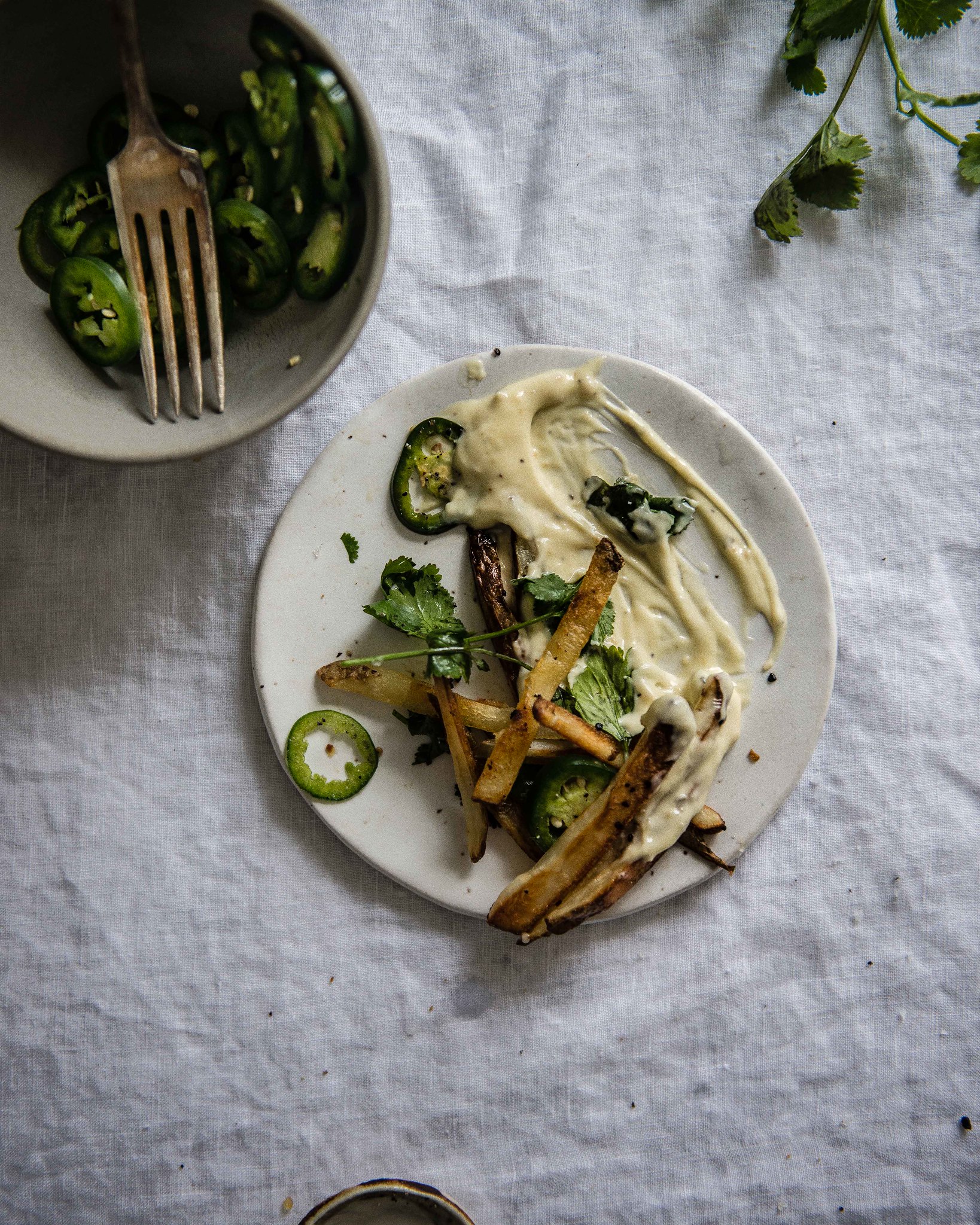 This uses my favorite crispy oven french fry method from Deb of Smitten Kitchen, but I’ve been very intrigued by her “easiest french fries,” and would happily hear your take on those!

I am sometimes a little skittish about pulling out a hot sheet pan with hot oil on it, and have found that heating oil in a pan until shimmering, then pouring over the french fries and tossing before spreading on a sheet pan, also works very well.