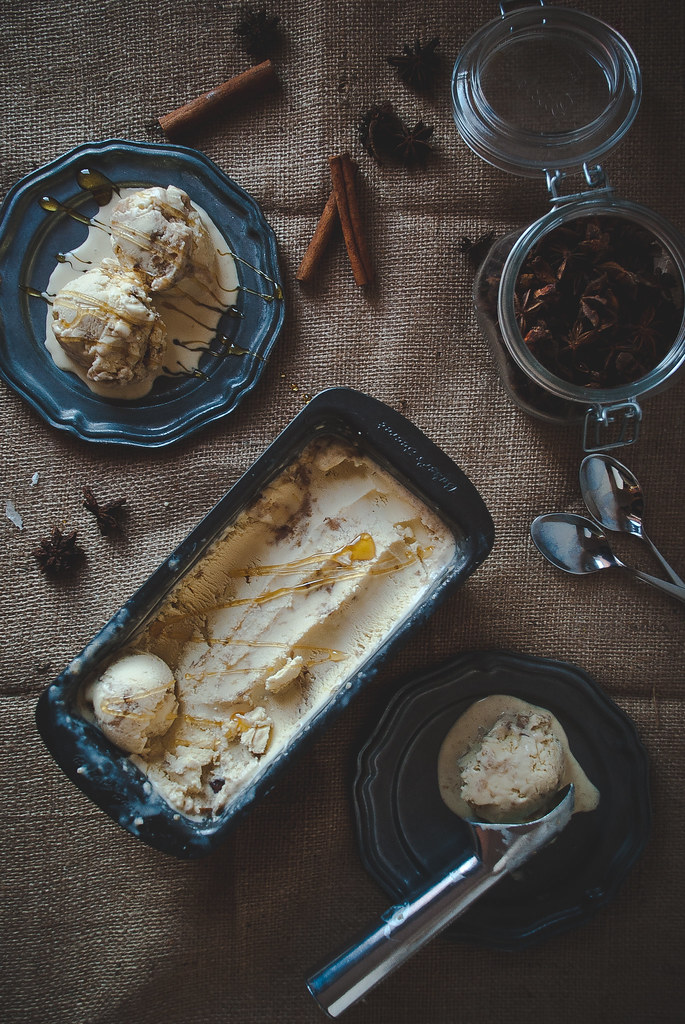 Guys! I made ice cream!

Last summer, I stumbled upon Carey’s gem of a blog, Reclaiming Provincial, by way of this remarkable ice cream — a honey-thyme & blackberry-goat cheese swirl ice cream. Let’s repeat that and just let it marinate for a second.  Honey.  Thyme.  Blackberries.  And goat cheese. I can’t remember the last time I’ve so instantly known that something would be delicious. Creamy yet tangy, probably wonderfully smooth, definitely all-around awesome — I was completely captivated.

So naturally, the moment I found myself with a (highly impractical, highly large, but highly coveted) ice cream maker that I’d thrown on my Amazon wishlist for Christmas and just assumed no one would actually buy for me (Lesson #1 in Amazon-Wishlist-Making: Fully visualize the possibility that you might actually own the thing you are carelessly telling other people to spend their money on for you, also, THANKS MA!) I knew I wanted to try making an ice cream like it.  (Sidenote: Unfortunately, this does require an ice cream maker.  I know, it’s a bummer if you don’t have one…)

But given that this is not quite the season for blackberries, and given that I had just one more pear leftover from the poached pears I made for these pear and almond galettes back in October (yeah, time stops in the freezer), I didn’t make exactly that ice cream. Instead, I went with a riff on Carey’s that incorporates a lot of the same elements, but rearranged a bit — the goat cheese went in the ice cream base, and I pureed the pear with its poaching syrup to make a pear swirl instead. 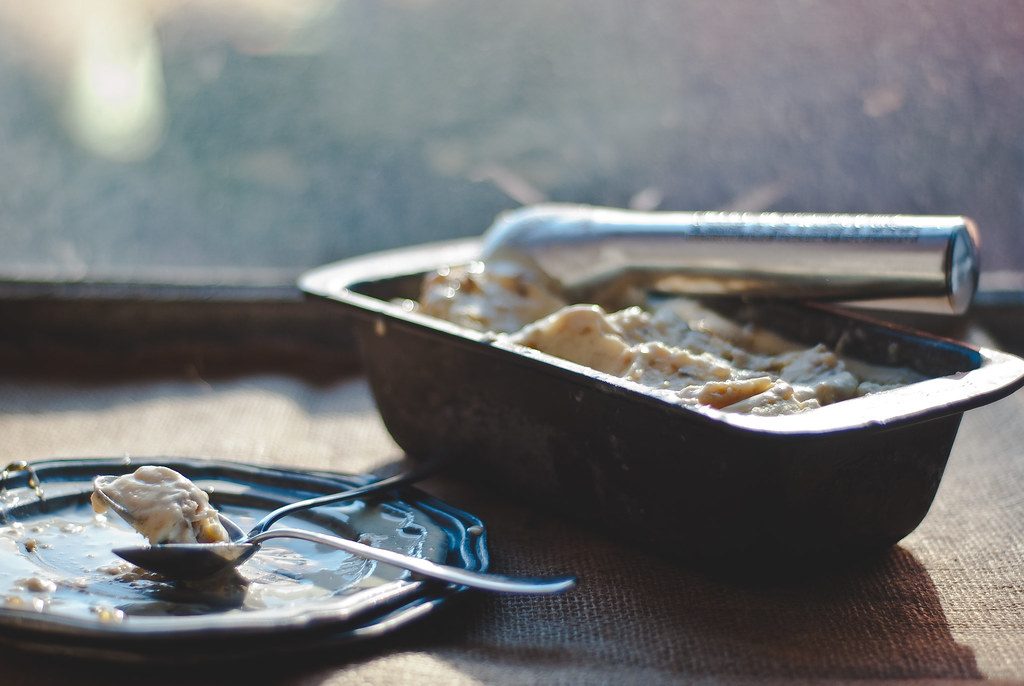 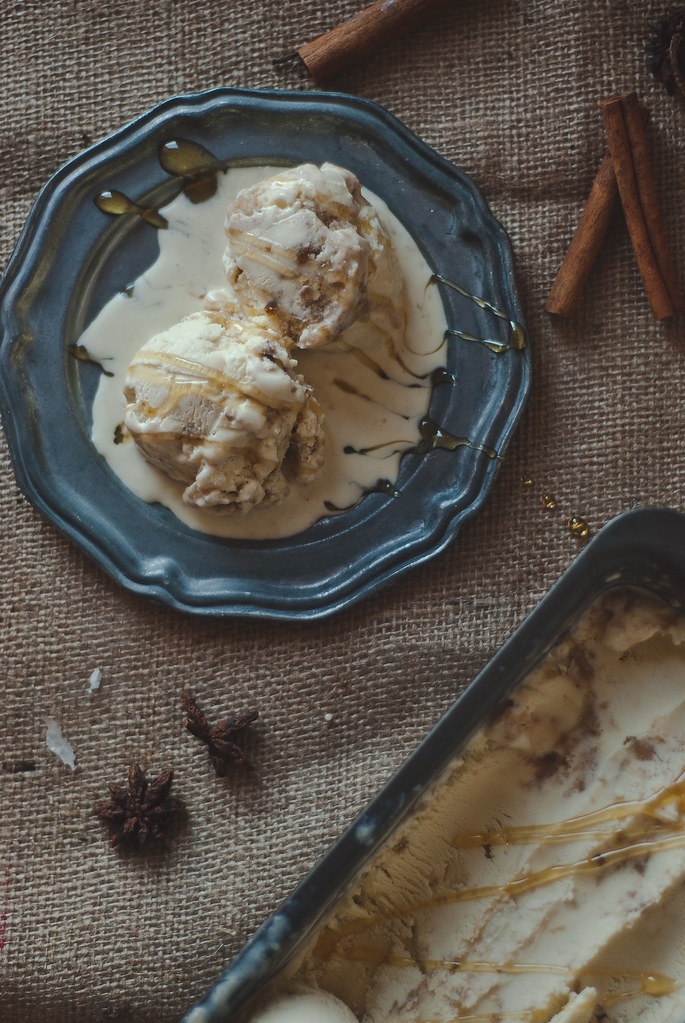 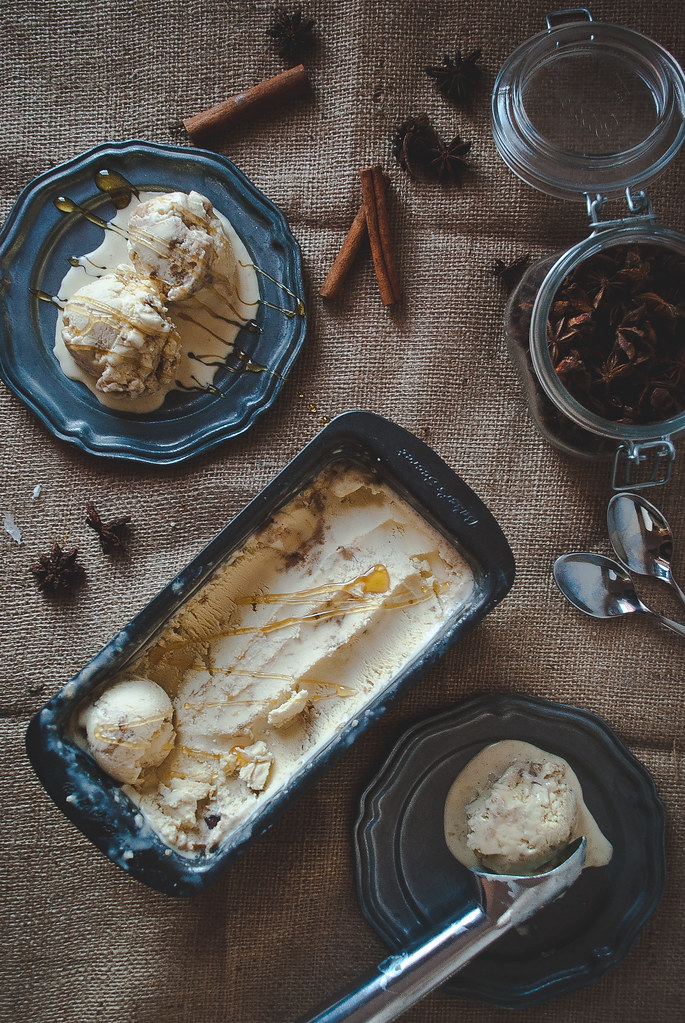 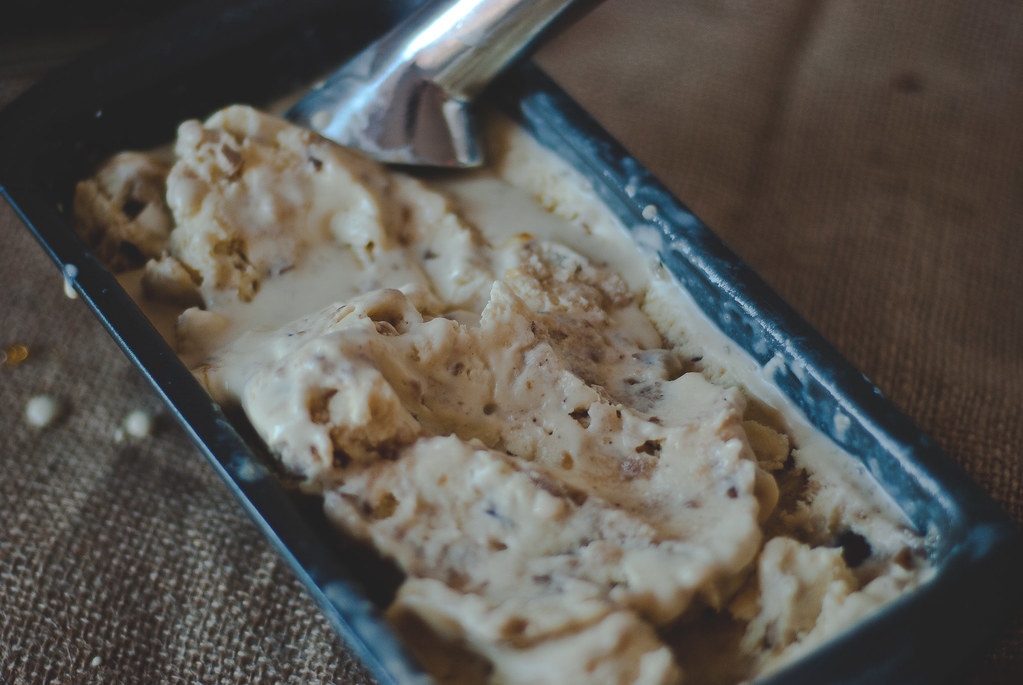 Seriously. The goat cheese, paired with the honey, adds a refreshing depth to the full-fat creaminess of an ice cream base that might otherwise verge on heaviness. At the same time, the pear swirl, with its anise, cinnamon, and clove goodness, balances out that bold tanginess with some warm fall flavor, and what’s more, it gives the ice cream a little bit of texture without the seized-up iciness that typically comes with frozen fruit.

I ended up serving this at a couple of friend-gatherings we had over the holidays, and while I got some askance looks at “goat cheese” and “ice cream” in the same breath, almost everyone who tried it gave rave reviews and went back for seconds. I can see the honey and goat cheese working well with any number of things — these pears, figs, and, in a few months, strawberries or those tantalizing blackberries. It’s genius. Thank you so much, Carey! Now I’m going to have to restrain myself from putting goat cheese in every ice cream I make for the rest of forever. And I’m definitely never buying ice cream ever again. 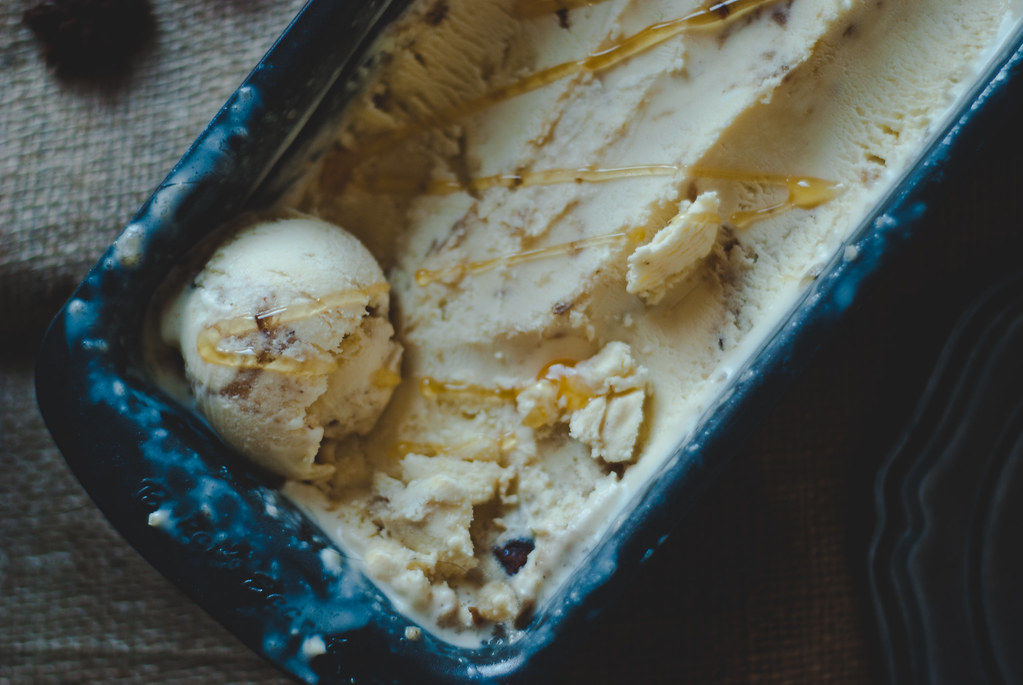 .  It’s pretty much the cheapest one out there (just $25 on Amazon right now), which is a plus, but be forewarned that it’s enormous.  (Again, Amazon wishlist lesson: Visualize, Cynthia!)  I hadn’t anticipated how huge it would be, so it’s a little unwieldy in my kitchen, but luckily we happened to have the space.  It may not be so if you’re also in New York and know the pains of precious New York kitchen real estate.  It also requires rock salt and a lot of ice to operate, unlike some that have bowls or gel packs that you freeze — besides the fact that I realized it after I came back from the grocery store, I kind of think it’s actually a plus, because freezer space is at more of a premium than kitchen space in our apartment, and this way you aren’t stuck waiting around if you forget to throw the gel pack in the freezer or something like that.  And now I also have enough rock salt to defrost Antarctica, so there’s that.

And okay, lastly — I feel a smidge guilty posting an ice cream recipe that requires churning because for the longest time, prior to getting this ice cream maker, I used to be so bummed out whenever I saw a fantastic recipe and then subsequently discovered I couldn’t make it without churning it.  As my way of apologizing, I present to you a fantastic-looking no-churn fig coffee ice cream by Sarah at The Vanilla Bean Blog — another wonderful flavor combo and a recipe that only needs to be frozen (and doesn’t even need to be stirred from time to time!)  I’m tempted to use condensed milk and cream to see if this can be made no-churn, just to try (and, okay, just to have more goat cheese ice cream because I’m addicted!)  Sarah has an entire array of no-churn recipes (rhubarb! olive oil and vanilla! bittersweet chocolate with fleur de sel!)  just waiting to be not-churned by you. 🙂 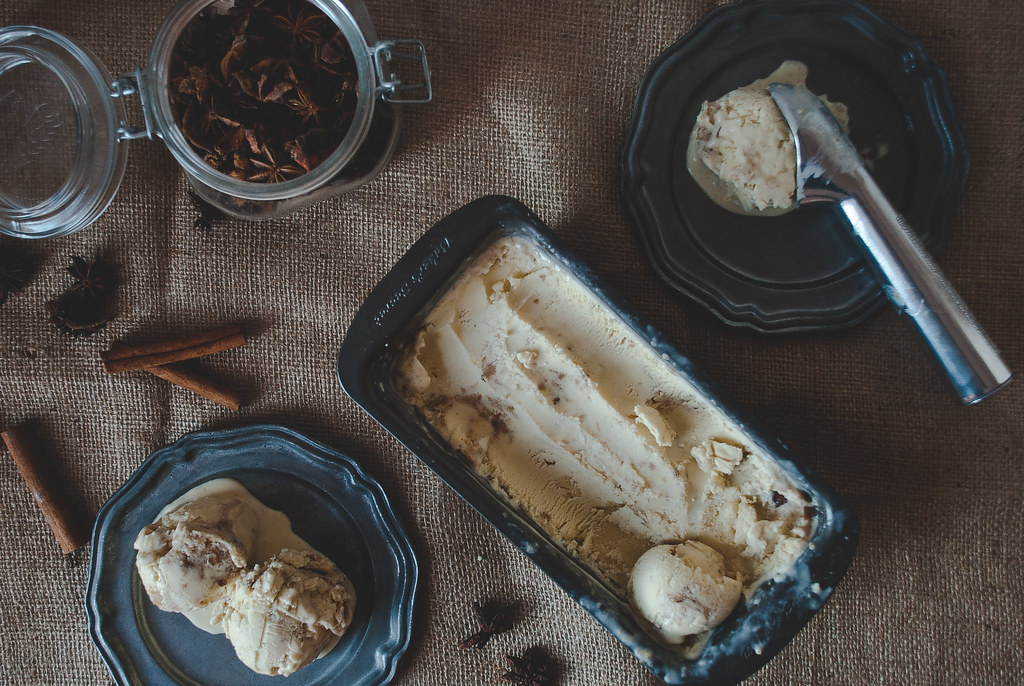 inspired by and based on this ice cream by Carey at Reclaiming Provincial.

*On the type of goat cheese, I used fresh, not the crumbles, and don’t know how it would taste if you opted for the drier type.

In a pot, combine water, sugar, vanilla, cloves, cinnamon, and anise, and bring to a boil. Stir until sugar dissolves, then add the pears and cook for 10-20 minutes or until pears are tender. Remove the pears and reserve the syrup for other uses.

Note: Feel free to adjust the spices to your liking — sometimes I throw in nutmeg, ginger, or cardamom depending on how I’m feeling, and it’s all great.