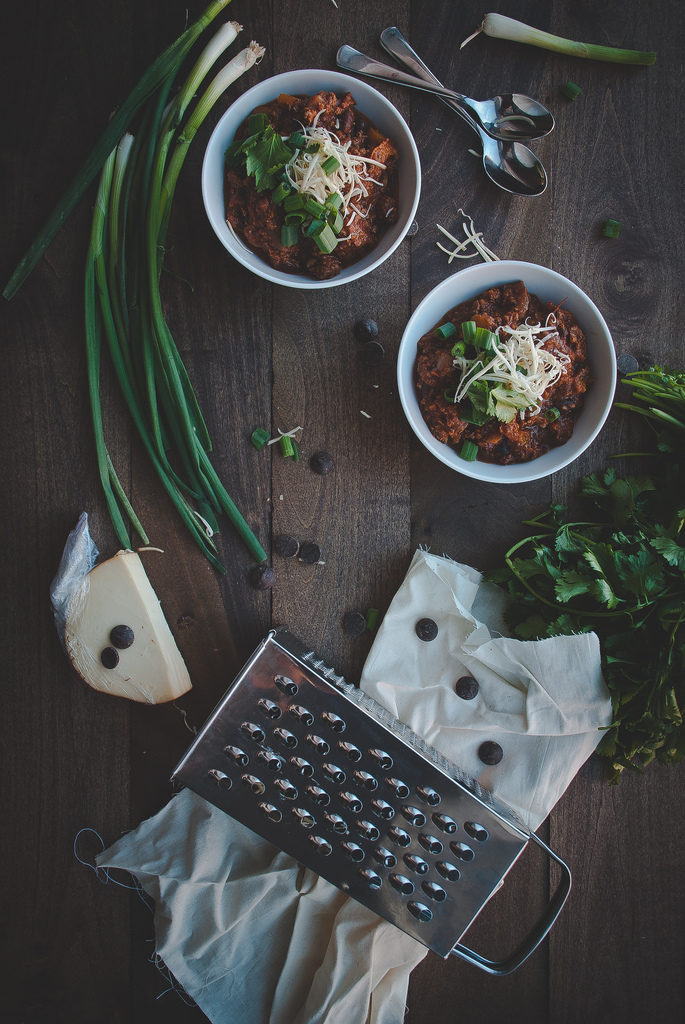 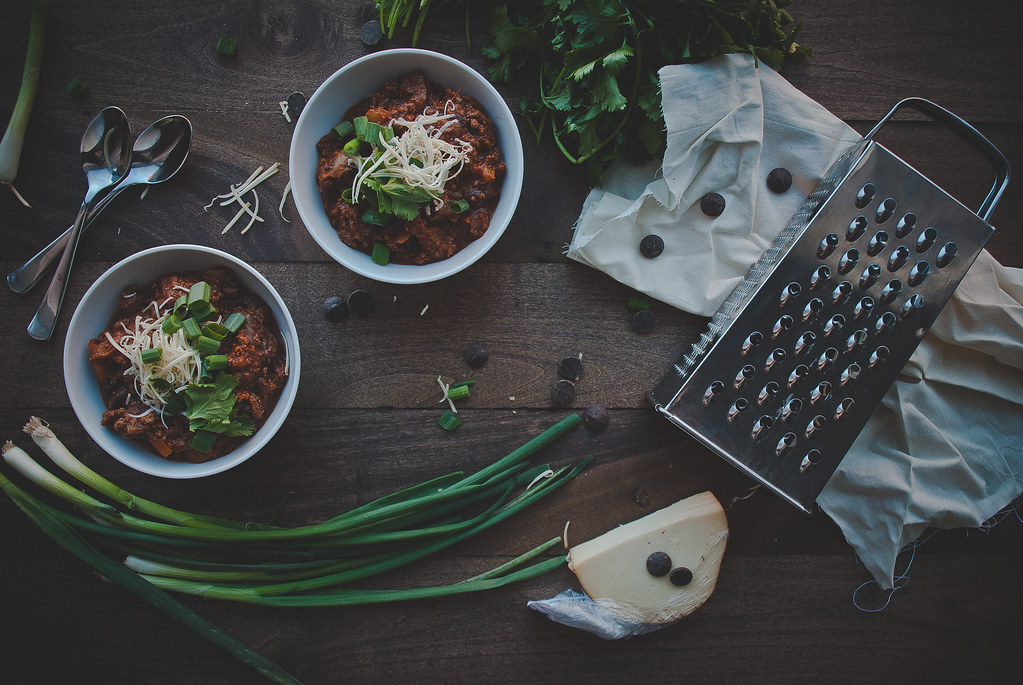 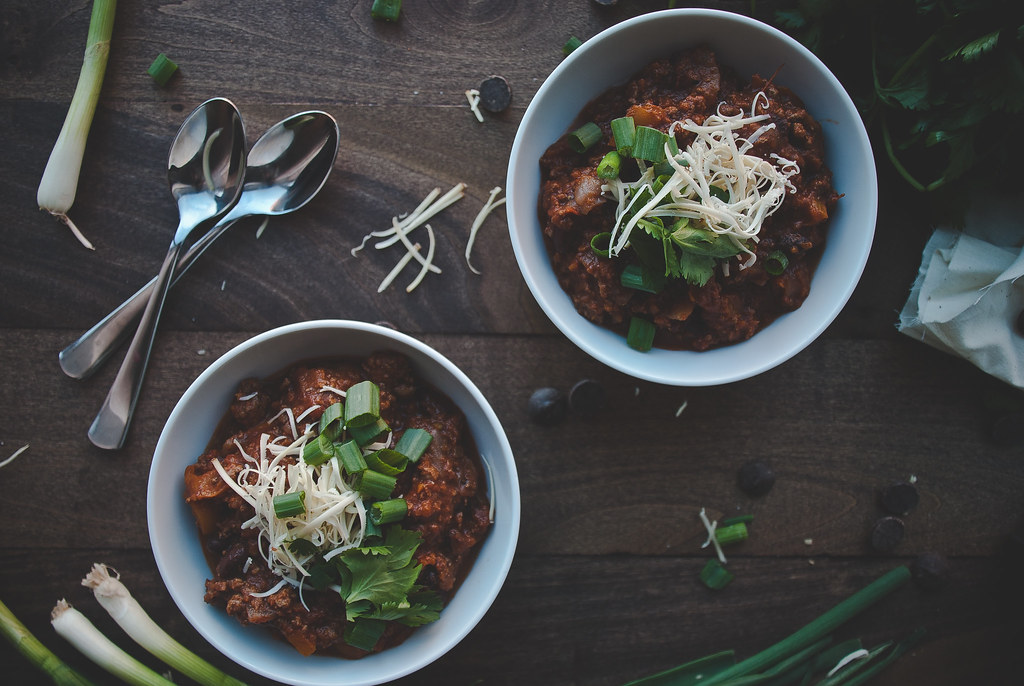 So, this weather, huh? I’d originally planned to post this ice cream that I can’t stop talking about, but then I heard it was supposed to be, you know, kinda cold outside this week. And somehow it seems like bad form to post something frozen when people are in danger of actually freezing. (Stay warm, folks!) So let’s talk about the ultimate warming food instead — chili. With chocolate!

The beauty of cooking for yourself is that you can make your food taste exactly how you like it best. It’s probably why I started cooking in the first place — dislike of overcooked pasta that mushes in your mouth, thinly tart tomato sauces, puckery-sour and flat at the same time. I like tomato-based sauces sweet, thick, and robust, with a healthy dose of brown sugar. In the same way, I love chili that is hearty, full of ground beef, sweetly smoky and spicy. (And, of course, cheesy as f.)  No watery chili with more beans than beef for me.

That said, this version might be a little idiosyncratic (and not in a trendy way!)  I use just one 14-ounce can of black beans, because I like those best and don’t like a lot of beans in my chili.  (Is that weird?)  I know some recipes have as much as a 3:1 ratio of beans to chili.  And, like I said before, I like it a bit sweeter than the norm, adding both brown sugar, and — don’t judge me! — a bit of ketchup.  It’s a holdover from the first spaghetti sauce I ever learned how to make, a recipe from an old Southern cookbook from a staple restaurant in my college town, and I just love it.  (Edit: Y’all wanna hear something crazy?  This restaurant is Mama Dip’s — and today I came across her granddaughter’s  blog, Southern Souffle, only the best Southern cooking blog I’ve come across in ever.  Entirely by coincidence.  Small, small world!  And yes, I did kind of freak out when I read her About Me and saw who her grandmother was.)

I’d never added dark chocolate to my chili before this version, though, and I’m totally hooked. I don’t think you can even really taste the chocolate — especially not with a version like mine that is already a tad sweet — but what it does do, somehow, is really tie everything else together into one dish. Instead of each ingredient announcing itself over the next, the chocolate is the binding agent, melding every flavor together into one spectacular chili. David Lebovitz says it adds “depth of flavor,” which could perhaps be another way of putting it, but I felt that what it really did was harmonize it.

Oddly, New York seems to be getting off easy (well, comparatively, with a high of 13 degrees) in the whole chillpocalypse, which is a weird feeling for me after being in Boston for the last three years. Still, we got enough snow last Thursday and Friday that this chili was the only thing I knew I wanted to make. We’ll been having the leftovers through this second cold snap, too, and it just seems to get better with each day it keeps. I think you’ll love it if you make it — and I hope you all stay warm! -60 just sounds terrifying. 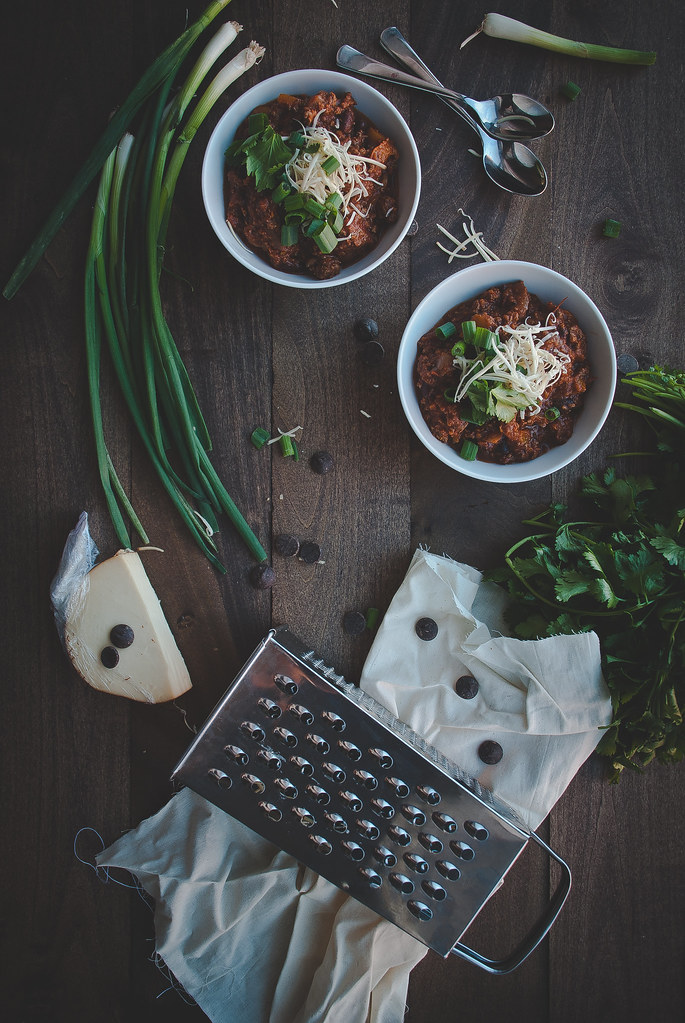 As stated above, this is a recipe for a slightly sweeter and slightly less bean-y chili. Feel free to up the beans to two cans if you like, and feel free to decrease the sugar or omit altogether if that’s your preference.

As for the chocolate, David Lebovitz recommends unsweetened chocolate for this, which I did not have. If you use this instead, you might want to increase the amount of brown sugar to compensate.