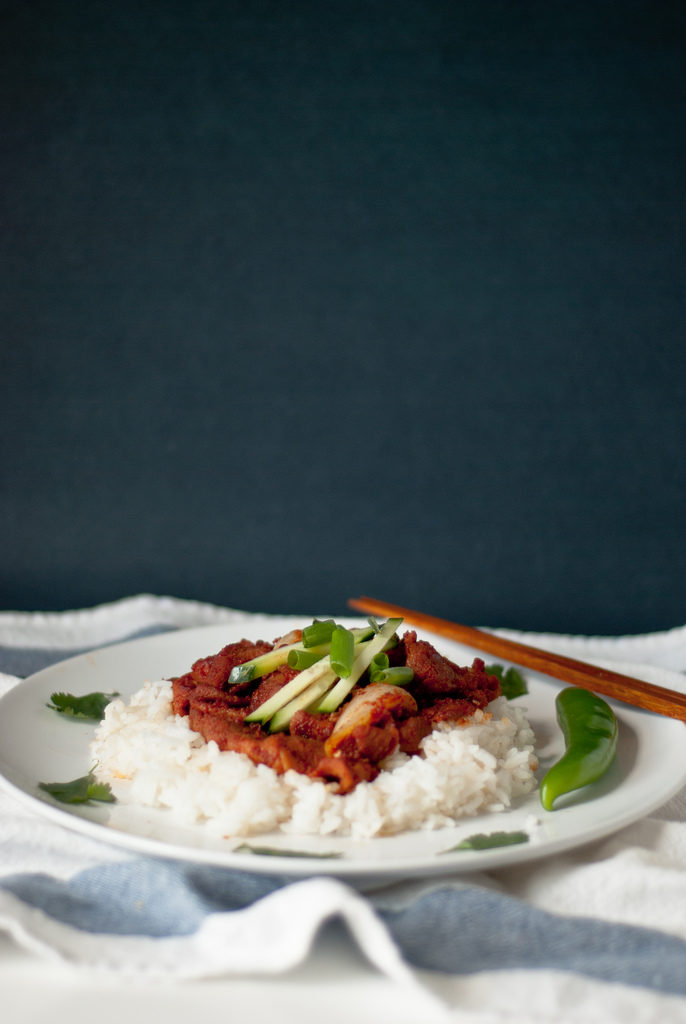 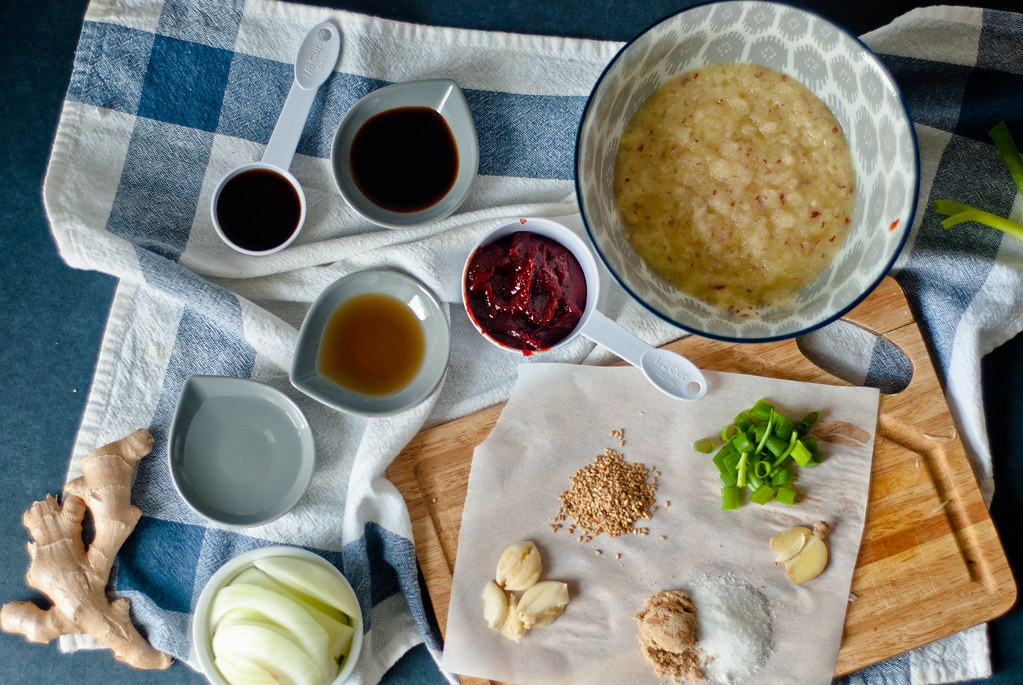 I grew up in a relatively small city in the South. It’s big enough to have an airport, but small enough that that airport only has five gates (and one direct flight to NY that I never take because it costs approximately a billion million dollars) — big enough that some people have heard of it, but small enough that a nod and an “Oh, right, right,” is as much as they can muster. 🙂 (Occasionally, I’ll meet someone who actually drove through it.) It was also small enough that, growing up, I can remember the first restaurant of almost every kind of unusual cuisine opening up in town — the first Korean restaurant, Thai, Vietnamese, etc. — and I can also remember the first time I ever had any of those kinds of foods. The first time I had pork bulgogi, then known to me only as “Korean spicy BBQ pork,” I thought it was the most ridiculously delicious dish I’d ever tasted, and I thought that that one god-like restaurant must have been the only place in existence that could create such a magnificent mouth-party. Logical. (And thus began a lifelong love affair with Korean food.) 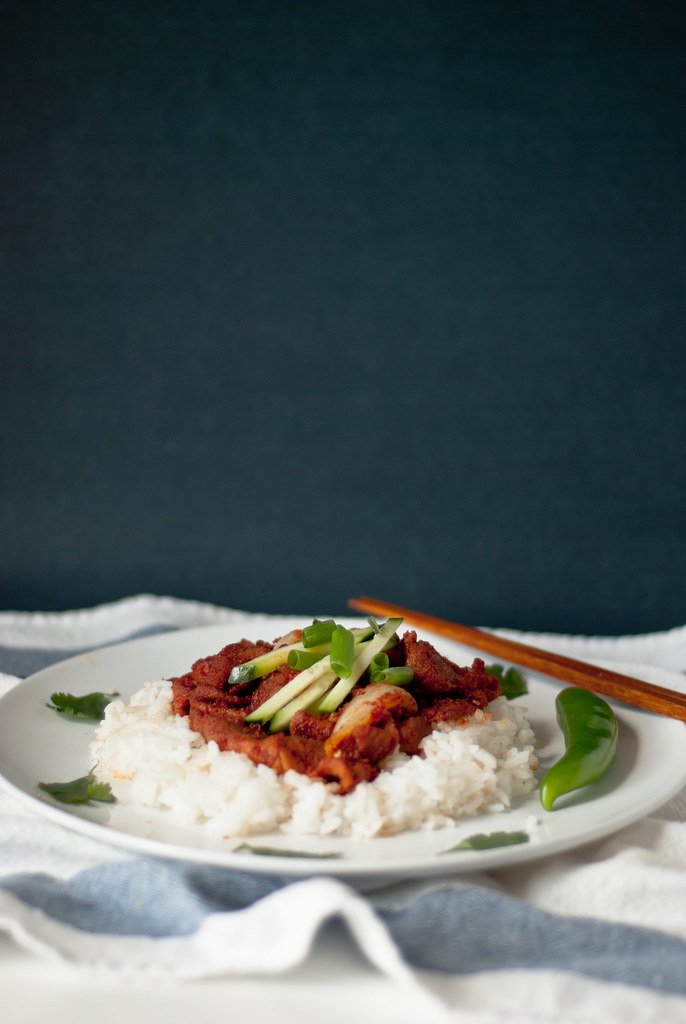 Since then, I’ve wised up and learned that it’s actually called pork bulgogi (or jeyuk bokkeum, depending on whether you marinate the pork), and that it’s a Korean staple that’s not at all hard to find. And it’s not difficult at all to make at home yourself, either! Like beef bulgogi, it’s one of my favorite bulk make-ahead meals — I divide the meat into gallon Ziploc bags and freeze them indefinitely. They should last for at least six months (but they never make it that long). 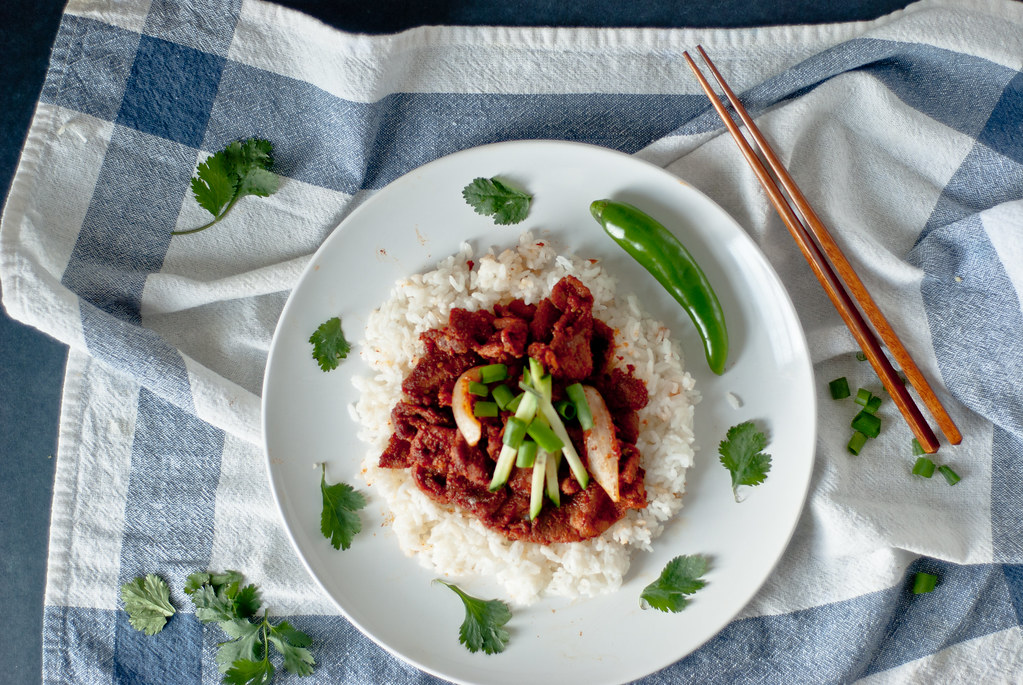 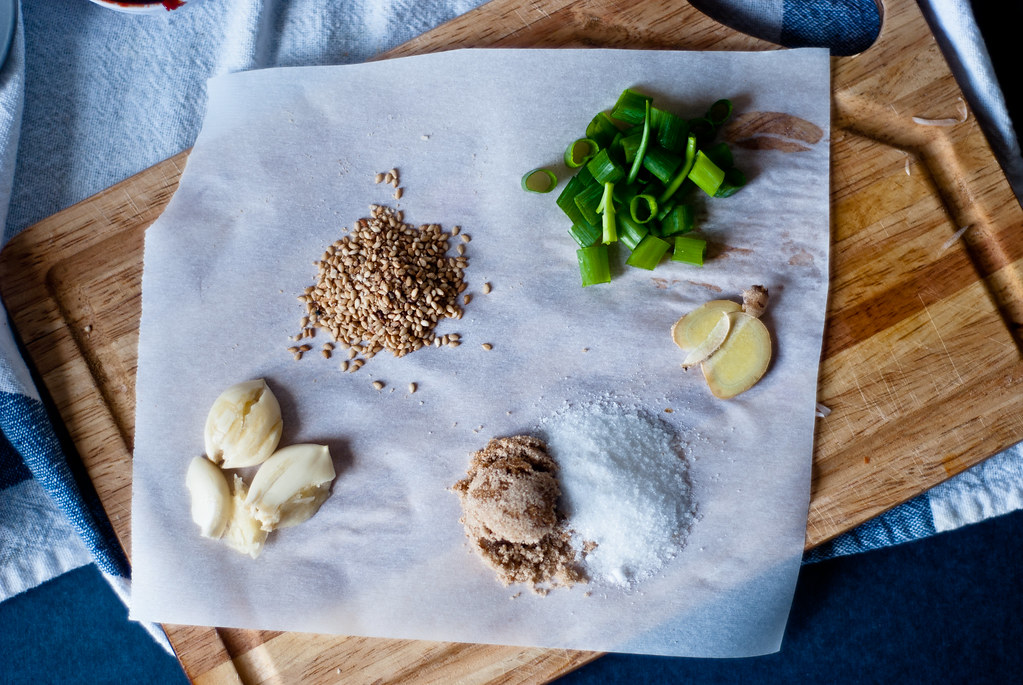 I never knew the difference between pork bulgogi and jeyuk bokkeum until I read it on Maangchi’s site several years ago — as she notes, the taste is very similar, but jeyuk bokkeum is pork stirfried in the spicy sauce without marinating the meat first, often with more vegetables, whereas the pork bulgogi is marinated and then cooked over a pan, grilled, or barbecued. I think I prefer pork bulgogi, because the taste seems a bit more well-rounded after it’s had time to marinate. If you’re in a hurry or haven’t had the chance to plan ahead, though, this doesn’t need to marinate long, if at all, and you can just stirfry right away if needed. 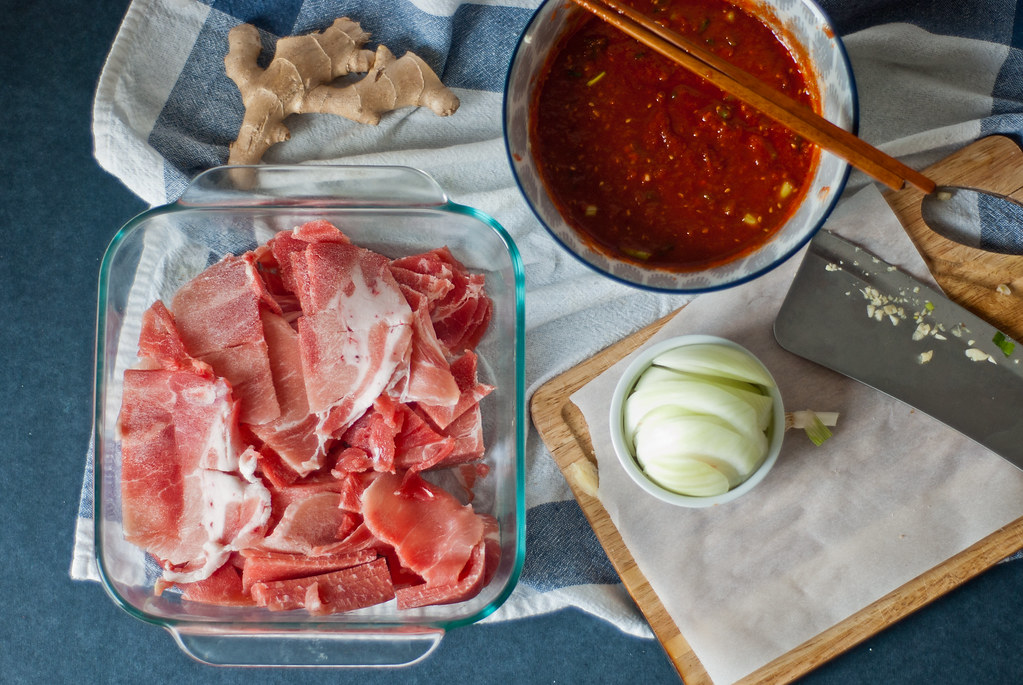 Lastly, like beef bulgogi, this dish depends enormously on the cut of meat. If you can’t find thin-sliced pork butt, pork shoulder, or pork belly (the Boston Korean markets actually labeled it “pork bulgogi cut,” which was convenient, but sadly the H-Mart in Manhattan does not), then it really will not turn out well. It makes such a difference that I generally don’t bother making it if I can’t find the right cut. 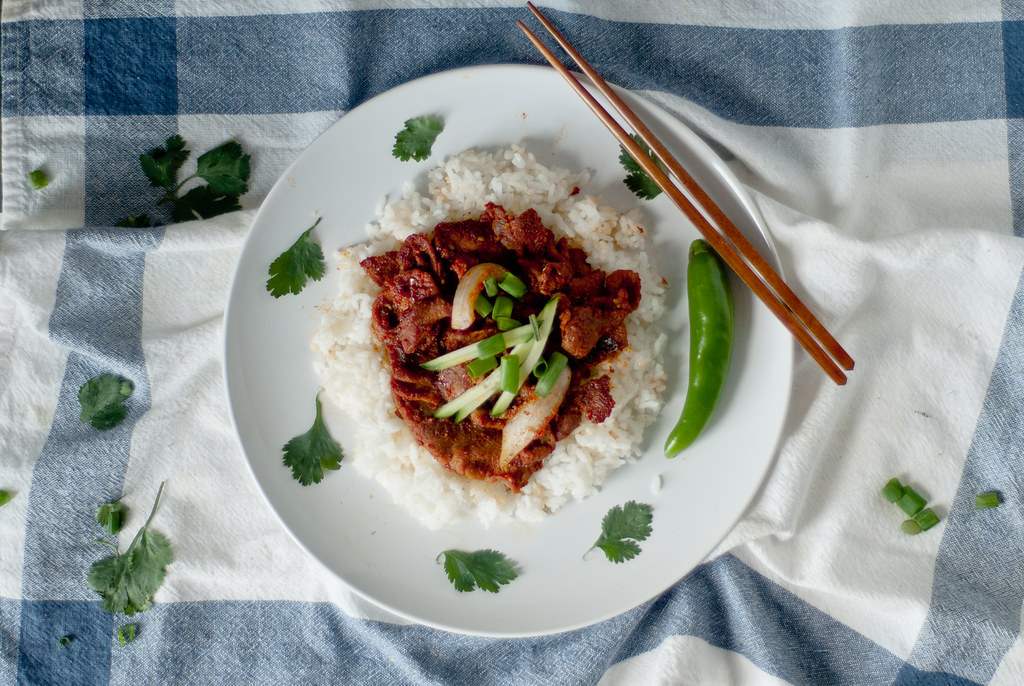 1. Combine all the marinade ingredients in a large bowl. Add pork and massage thoroughly, making sure each piece is well-coated. Chill in fridge or freeze until you’re ready to cook.
2. When ready to cook, heat a skillet over medium-high heat with a bit of oil. Place meat in a single layer in the pan, taking care not to overcrowd, and let fry until meat is browned and begins to form a few caramelized bits. Serve over rice or in ssam. 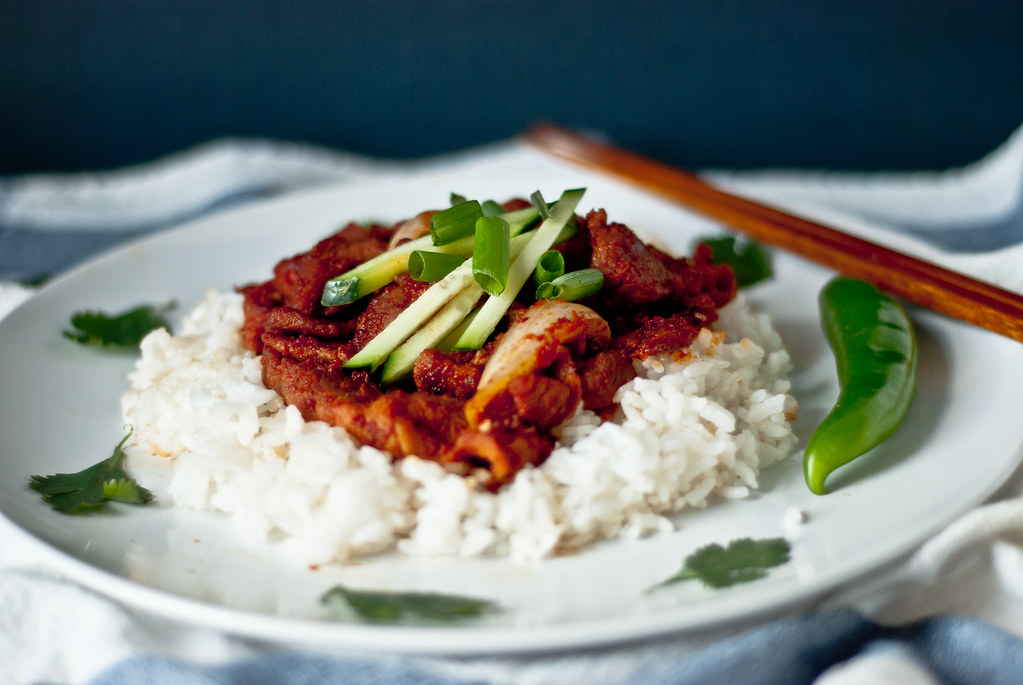 Thanks to Ozmundaregalis for the inspiration on how to style my bulgogi — her blog is really something else. Styling with rice was definitely a new adventure (and frustrating — please ignore the red spots from rearranging the pork ;)!)