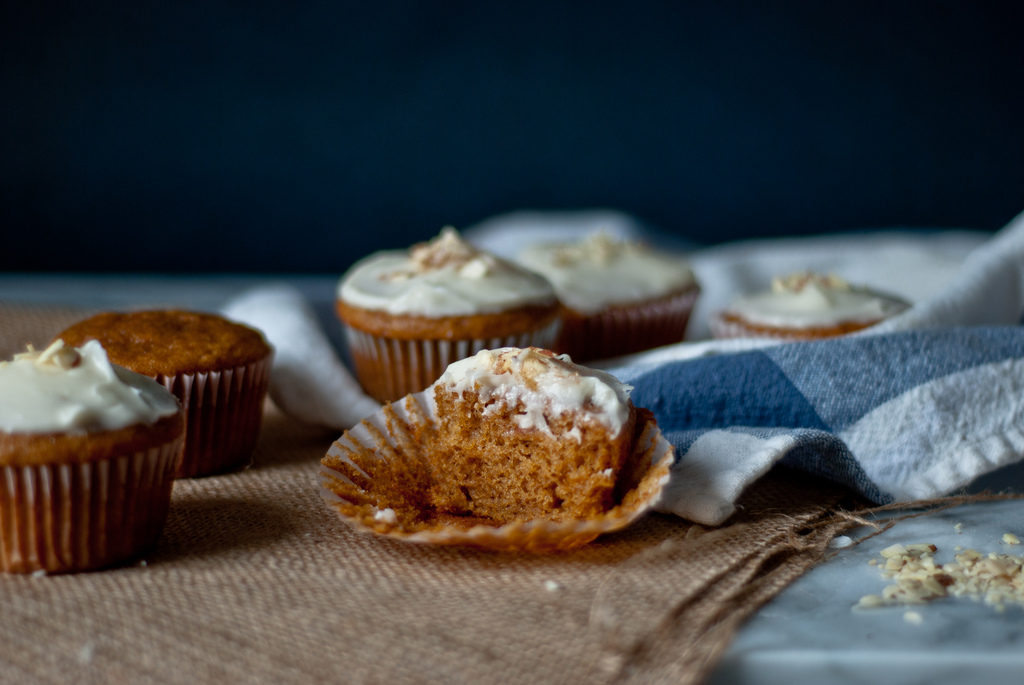 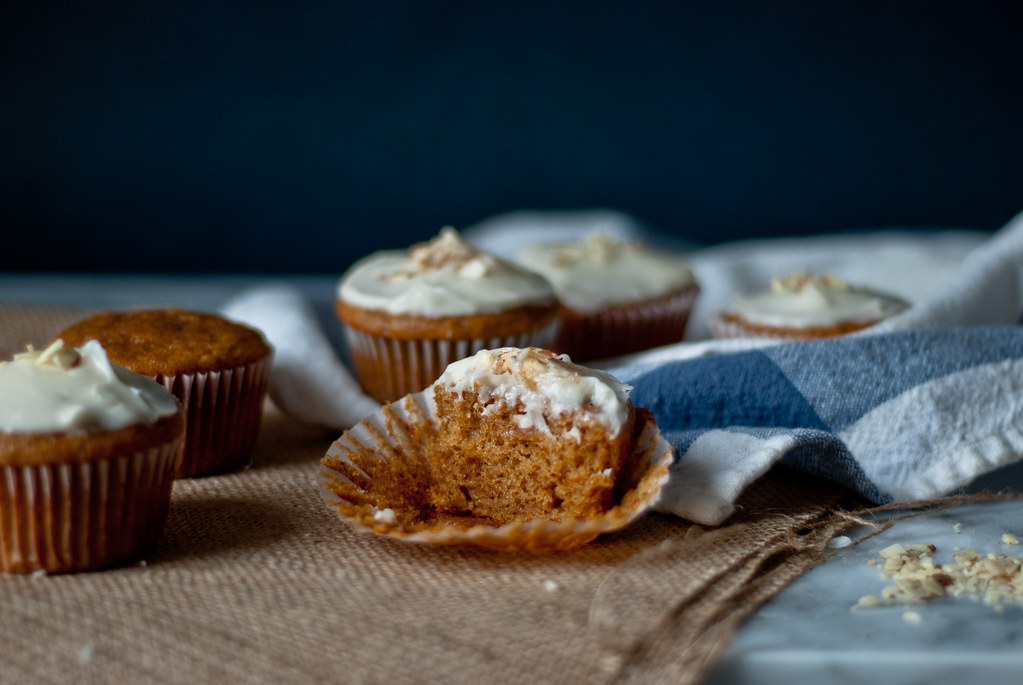 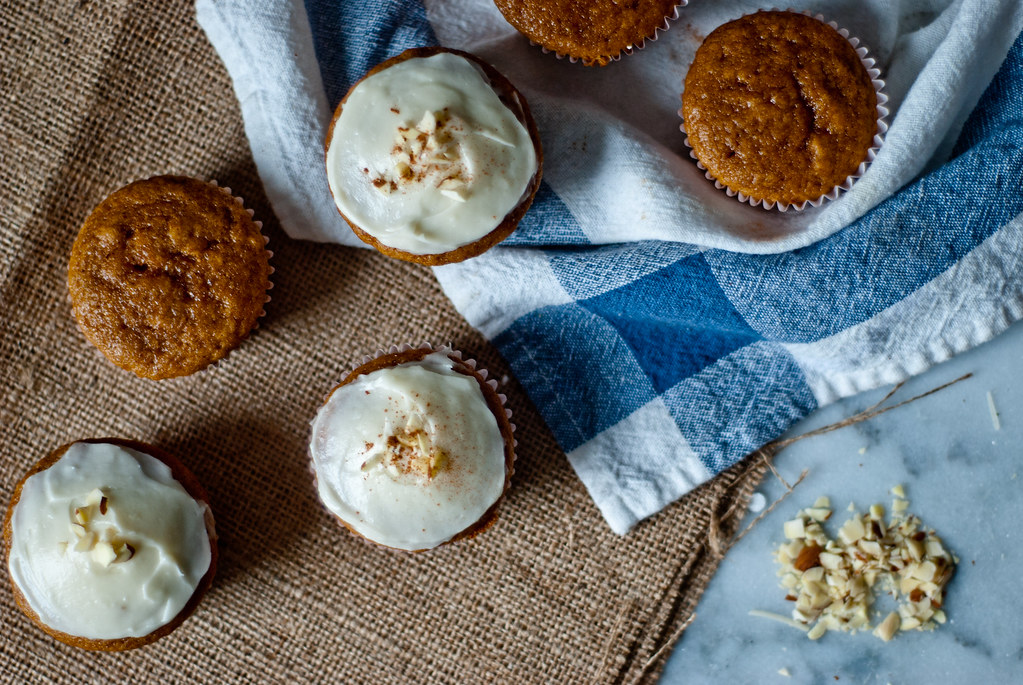 The main reason I didn’t simply try others’ recipes for this was because I wanted to figure out a recipe that yielded only a half-batch of six cupcakes, not twelve or two dozen — though I ended up making more than two dozen by the time I was happy with the recipe. Go figure. (It’s a very good thing my dad likes pumpkin, because he had these every day when I was home thanks to my experiments.) Baking for two means that I need recipes that I know are just as delicious as large-scale ones, but won’t be hanging around for so long that we get sick of trying to finish them all.

The first recipe I tried (above) was an amalgamation of several pumpkin cake recipes I found, which I then divided by three. I don’t really know why I thirded it — maybe the ease of the numbers — but it gave me … seven cupcakes. Sigh. (Bowl #2 called it a “skinny baker’s dozen.”) And, though they were delicious, the height of the domes, the crackled top, and the somewhat dense consistency reminded me more of pumpkin muffins than cupcakes (I frosted them anyway).

Then came three or four batches where I attempted to bring the recipe down to six cupcakes. I played around with the pumpkin-to-flour ratio, the amount of sugar, the amount of oil, and finally the leaveners. Each time was almost right, but the leaveners in particular made the cupcakes a bit too delicate, with a very flat top that tended to spill over and stick to the cupcake pan. Lesson learned — too much baking soda and baking powder can cause your cakes to rise too quickly, run over the edges, and stay flat, without forming domes!

Finally, I arrived at this version. The cake is wonderfully moist, but not dense; the crumb is light, but still substantial; the tops are just slightly domed, but smooth and not at all like muffins. And it’s just the right balance of spice and pumpkin, in my opinion. (OK, a small admission — there’s still a little extra batter, but if you’re like me and fearless in the face of salmonella, well, then there’s just the right amount.) Oh, and I can’t forget about this maple cream cheese frosting, which is just incredible — it’s based on the Smitten Kitchen recipe, with just a bit more confectioners’ sugar for extra structure. Please try these, I think you’ll really like them if you do! 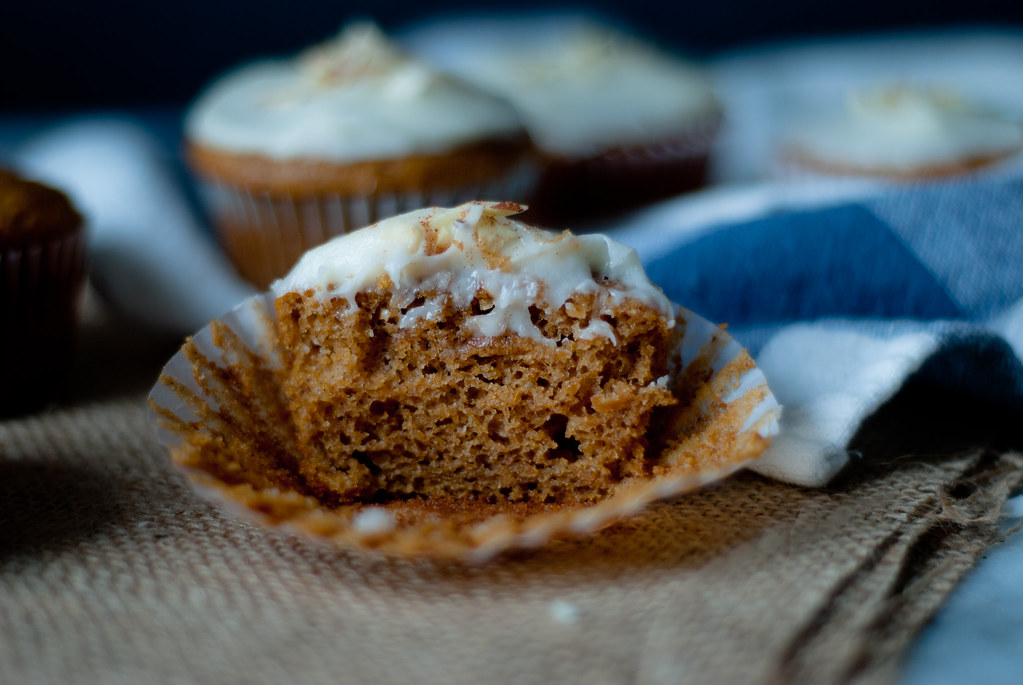 Pumpkin Cupcakes, Half-Batch
yields 6 regular-sized cupcakes. (Note: I also made these as mini cupcakes for a party, and it will yield about 18-20 minis, baked at 350 for about 10-12 minutes.)

1. Preheat your oven to 350 degrees and line a 6-cup muffin tin with cupcake liners.
2. In a large bowl, vigorously whisk the egg and sugar together until creamy. Add vegetable oil, Greek yogurt, pumpkin, and vanilla extract, and whisk again until smooth.
3. In a separate bowl, sift together flour, baking powder, baking soda, spices, and salt. Add the flour mixture to the pumpkin mixture and mix until incorporated, taking care not to overmix.
4. Fill liners to 2/3 full or less for these. I filled mine about 3 tablespoons of batter each, using a 1/4 cup measuring cup. You will have a little bit of extra batter left. Bake for 18 minutes, or when a toothpick inserted comes out clean, and tops spring back when touched.

Maple Cream Cheese Frosting (based on Smitten Kitchen)
will yield just enough for six cupcakes (about 1/3 cup of frosting). Easily doubled if you want to pipe the frosting instead.

1. If mixing by hand, whisk together cream cheese and butter first until very smooth. If you’re mixing by hand, it will greatly help if the cream cheese and butter are quite soft beforehand. Add in the sugar next and whisk vigorously until smooth. Last, add the maple syrup or molasses and whisk again until incorporated. You may need to add a bit more confectioners’ sugar after you add the syrup.
1(a). If you’re lucky enough to have an electric mixer or stand mixer, just throw everything into a bowl and beat on high speed until fluffy. Ta-da!

Note: I’ve since tried this maple brown butter cream cheese frosting by Tutti Dolci and it blew my mind — you have to try this.  I devoted a whole post to it even though (1) it’s not my recipe and (2) the pictures were crappy.  It’s really, really good.