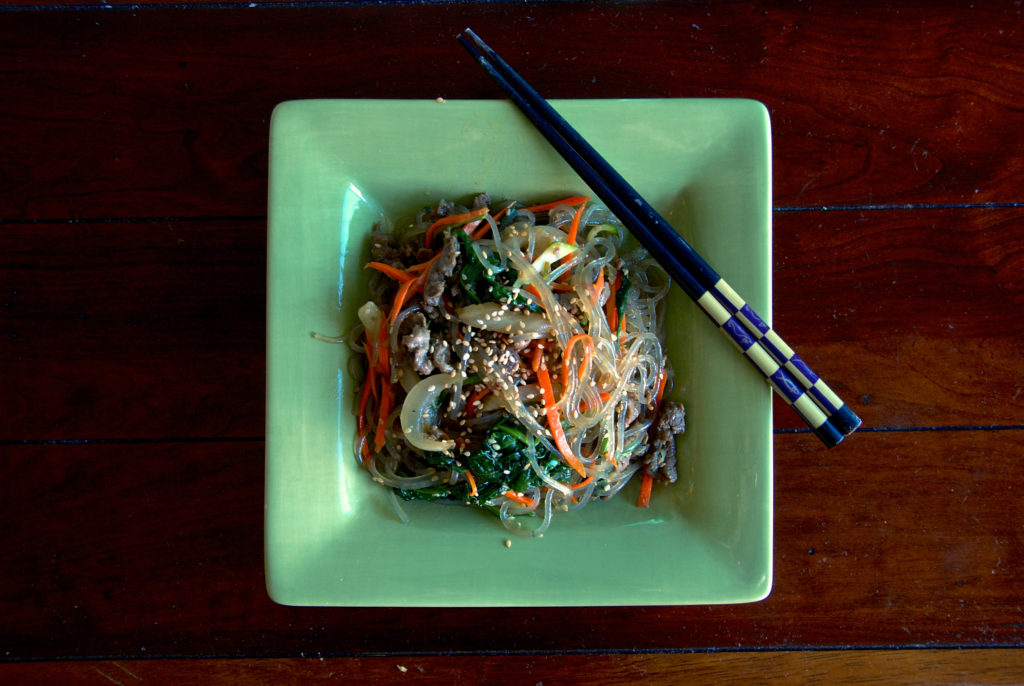 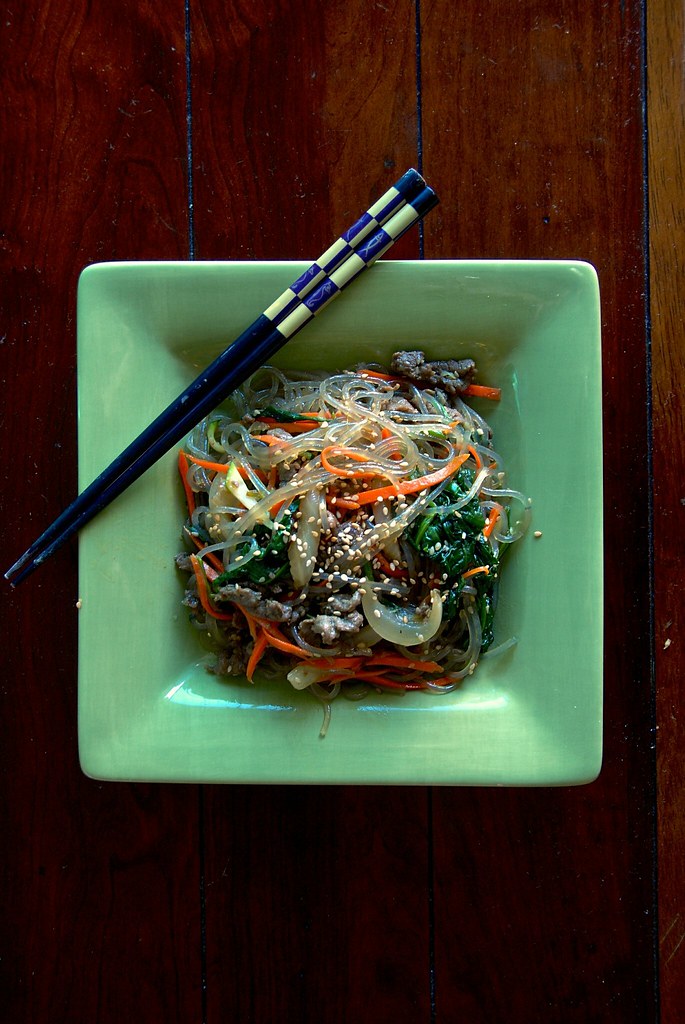 All right, so I might be breaking some of my blog rules (gentle guidelines?) with this recipe. It’s not technically difficult — if I made it, it’s definitely not — but it’s a bit of a hassle. And it’s not super great for little households, since it’s at its best when first made. But it’s homemade japchae! Homemade japchae. I just couldn’t not. This is one of my favorite noodle dishes, Korean or otherwise. I love anything both savory and sweet, I love chewy and textured noodles (soft noodles are the worst) and I love bulgogi. And this is all of the above. It is heaven. On a green plate. Plus, the recipe for bulgogi that I’ve included is simple and great for little households, so there is that.

Neither Bowl #2’s mother nor I had ever made japchae before, and it seemed like quite the endeavor to both of us. But we both really wanted to conquer it, so this past week we rolled up our sleeves and set about figuring it out. (There was a lot of peering doubtfully at the stove and asking each other, “Should we … add more soy sauce? Should we … add more sugar? Should we take it off the heat? Should we leave it on?”) But all in all, making japchae was easier than either of us expected. We were both intimidated by the dangmyeon noodles, but it turned out to be both simple and quick, and the texture, which seemed like the hardest part, was just right. Other than that, it’s just a bit of a hassle to marinate the beef and prep all the veggies, much like bibimbap, but not much more skill-wise is required. We decided we’ll need to try it one more time before we can say for certain that it’s a done deal, but for now here’s our first try! 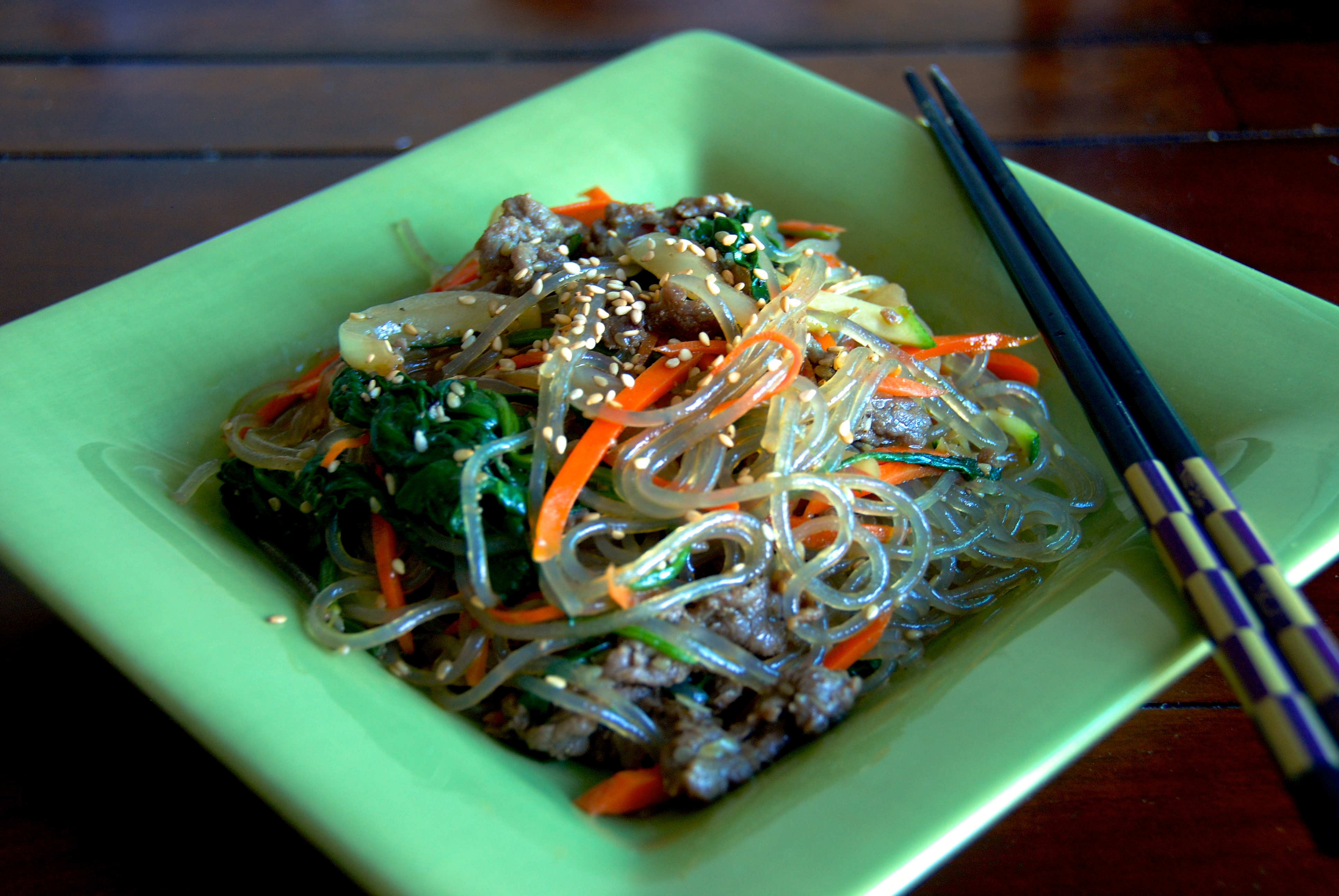 Like I said before, this recipe is a little unusual for my blog, which has (so far) focused on recipes that are either simple and suitable for two, or, if not, then at least will feed us for a few meals and make the extra hassle worth the effort. Japchae isn’t difficult, but it is fairly time-consuming. And the recipe does make a lot, but it doesn’t keep particularly well — the dangmyeon noodles taste their chewy best right after cooking, and though panfrying to reheat instead of microwaving will help preserve the texture, well, that means you have to whip out a frypan to reheat it. At the same time, I wouldn’t recommend scaling it down because then the time and effort might not be worth it.

So this is a pretty sublime recipe for a potluck or for guests, but less appropriate for every day if you’re in a small household. (Note, though, that there are many recipes that cut down the hassle by not marinating the meat, and they look just as tasty — Maangchi’s is one, here is another — but I suppose we decided that the one time we did this we wanted to go all out!) 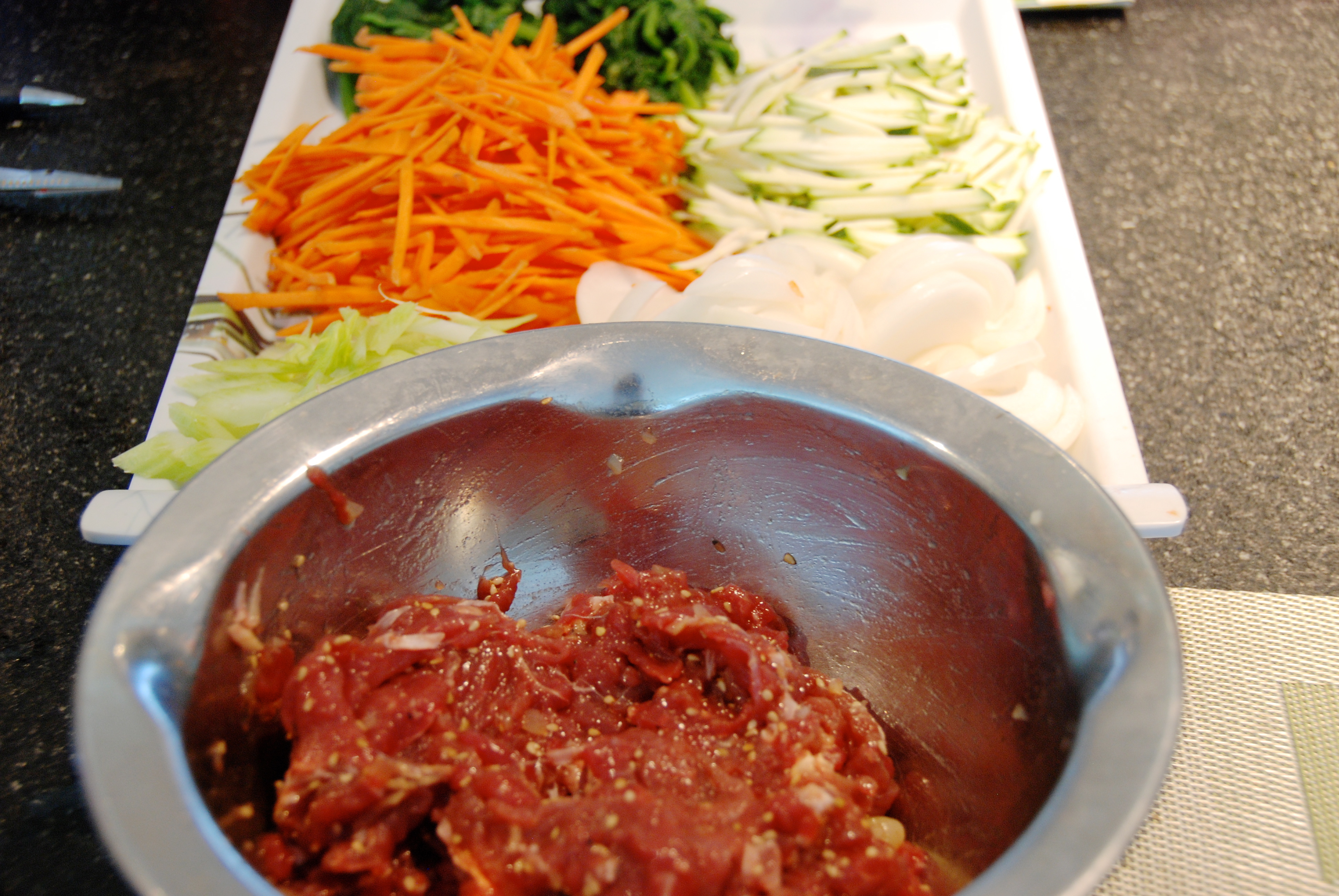 But! This does include a recipe for bulgogi, and like I said earlier, bulgogi is actually both simple and perfect for two. It’s probably the top time- and effort-saver I have in my limited arsenal. I buy 4+ lbs of pork and beef bulgogi meat every time I go to the Korean market because I don’t know when I can make it back, then I make a huge amount of both the regular and spicy pork marinade (Maangchi’s recipe for spicy pork is here, though I add a bit of fish sauce to that recipe). Then I divide the meat into 1 lb portions in gallon Ziplocs with their respective marinades. After that, all you have to do is stick it all in the freezer and defrost one by one when it’s time to cook. And each time you cook it will likely provide at least two meals. So it’s wonderfully easy and time-effective. I first learned this trick from my Korean friends, whose mothers would visit and give them big freezer packs of marinated bulgogi to store and make on their own 😉 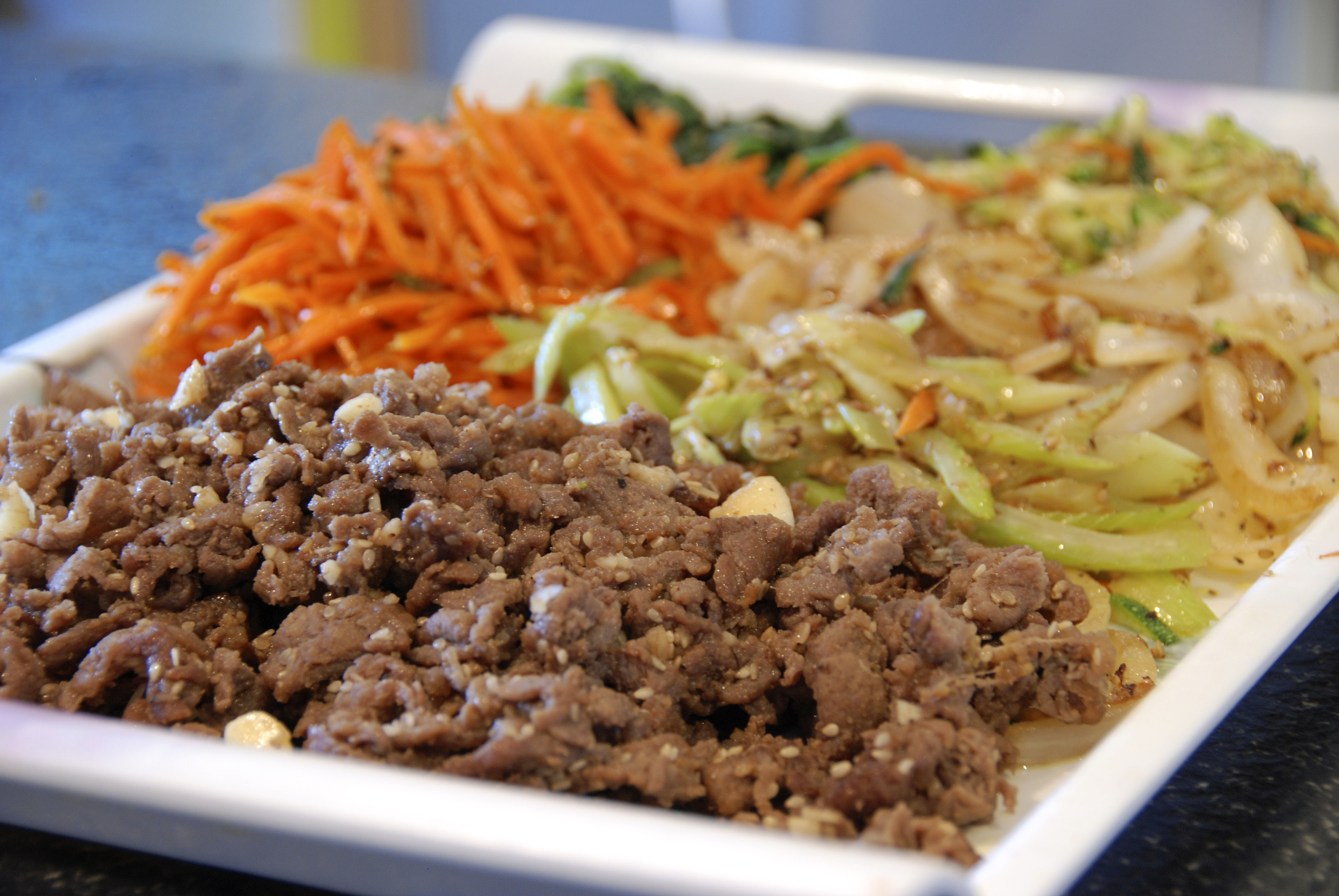 A few notes about beef bulgogi. First, in my experience, the most crucial part of bulgogi is finding the right cut of meat. Maangchi’s site has some helpful tips on what kind of beef to use, but in my experience, the most reliable way is simply to hunt down a Korean supermarket if you can and find pre-cut bulgogi meat. (Easier said than done, I know.) Everything else is mindlessly easy, but the cut of meat isn’t something I’ve been able to do myself with optimal results, even following tips on slicing when semi-frozen, etc. If you can’t find bulgogi beef, I might almost recommend just going with ground beef, which will soak up the flavor nicely and save you the effort of trying to slice beef as thin as it calls for. (However, I’ve also not yet asked a butcher to cut it for me, like Maangchi suggests, so perhaps that would work!)

Finally, if you wanted to make bulgogi on its own to have in ssam or over rice, just add half an onion, sliced, about 1/4 cup of julienned carrot, and a few sliced mushrooms to the marinade below, and sauté it all together when you’re ready to eat. 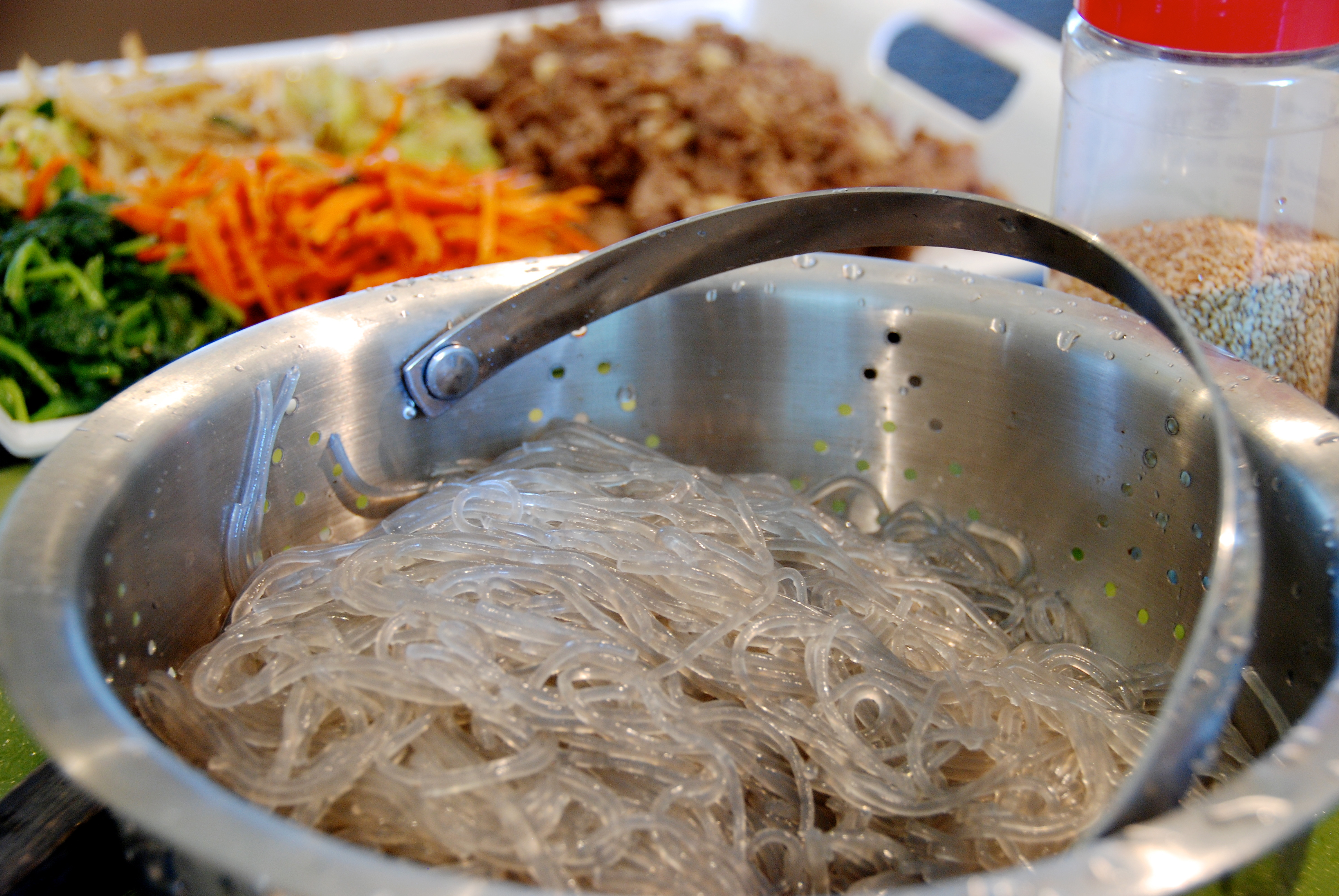 And now, at long last, the recipes. (Is this the longest post I’ve ever written?) The japchae includes the instructions for bulgogi, but I reposted beef bulgogi on its own at the end of the post.

Japchae
serves 6-8. Note: To reheat, panfry until hot, which better preserves the springy texture of the noodles than microwaving.

for the bulgogi and marinade (based on Maangchi’s recipe):*
12-16 oz beef bulgogi meat (you can substitute ground beef in a pinch)
1 pear, crushed or blended (Asian pears are best, but any will work well; I use Bosc and also sometimes apple)
4 cloves of minced garlic
1 tsp minced ginger
1 green onion, chopped finely
2 tbsp soy sauce
2 tbsp brown sugar or other sweetener (I sometimes use 1 tbsp of honey)
a pinch of ground black pepper
1 tbsp sesame oil

*again, if making the marinade for beef bulgogi on its own, see below

1. Marinate the beef bulgogi. First, you’ll need to marinate the bulgogi, ideally at least an hour before everything else and up to a day (or weeks to months if you freeze it). Combine the marinade ingredients in a large bowl (pear, garlic, ginger, green onion, soy sauce, sesame oil, sugar, and pepper). Place the meat in the bowl and massage thoroughly, pulling each slice apart to ensure that everything is well-coated. Replace in the fridge or freezer if you’re making it for later. Again, if you’re making it to have on its own, add sliced onions, carrots, and mushrooms. (You could probably do this even if you were using it for japchae, though I haven’t tried it.) Also, for japchae you might consider slicing the bulgogi into smaller pieces so that it mixes better with the noodles.
2. Prepare the spinach. Blanch the spinach by submerging in boiling water until a deep green (very briefly), then remove and place in a ice-water bath. Save the pot of water for the dangmyeon noodles. Season the spinach lightly with salt, pepper, sesame oil, and garlic. Set aside.
3. Prepare each of the other vegetables (carrots, onion, zucchini, mushrooms, and celery if using). For each, heat about a tablespoon or less of oil over high heat, then add the vegetables, season, and stir constantly until evenly cooked. If you’re short on time, you should be fine stirfrying them all together, but sautéing each separately will ensure that you get each to the right done-ness. Set each aside. (Optional: For more flavor, you can add sugar, soy sauce, and sesame oil to each of the ingredients.)
4. Prepare the beef bulgogi. Heat about a tablespoon of oil in a skillet over medium-high heat. Place the bulgogi slices in a single layer in the skillet and let sizzle until browned, cooked through, and bits are caramelized. I like to wait until the marinade is mostly cooked into the meat and is beginning to create sticky burnt bits in the pan. I think a tiny bit of burnt-ness here and there is okay in bulgogi, because it’s tasty 🙂 I’m sure all Asian mothers of a certain age would severely object here. When done, set aside. (Note that you may have to panfry in batches so as not to overcrowd the pan.)

5. Prepare the dangmyeon noodles. Now comes the trickiest part (which wasn’t that tricky after all!) Bring a large pot of water to a boil. Submerge dangmyeon noodles completely when the water boils — they should melt into the water fairly fast. Let cook for only about 4-5 minutes, stirring occasionally. When the noodles taste almost done but still a bit too chewy, remove and rinse immediately in cold water. Drain. Add a teaspoon or two of sesame oil to coat the noodles and prevent from sticking.
6. Mix it all together. For the final step, there’s a few things you can do here. If you don’t have a large wok, you can heat 1 tbsp of regular oil in a skillet, then panfry the dangmyeon noodles with 3-4 tbsp soy sauce, 2-3 tbsp of brown sugar, 1 tbsp of sesame oil, and sesame seeds. (These measurements are all to taste — you may need more or less depending on what you prefer. Just taste the noodles as you add seasoning bit by bit, to avoid over-seasoning.) Then you can simple combine it with the vegetables and beef in a large bowl and serve. If you do have a wok, then heat a bit of oil in the wok, then just add literally everything back into the wok and stirfry while adding the soy sauce, brown sugar, sesame oil, and sesame seeds. Let cook until the sauce is absorbed into the noodles, and serve with a healthy shake of sesame seeds on top. 🙂

I hope you enjoy this as much as I did! Thank you so, so much for reading. And if you’d like, here are a few other japchae recipes to compare to (also linked to above): Maangchi, Ozmundaregalis, and Ann’s Mélange. I think at some point we consulted each of these when we were feeling our way through this one, so thank you very much to each of you! Lastly, I reprinted the beef bulgogi recipe on its own below, if that’s more convenient. 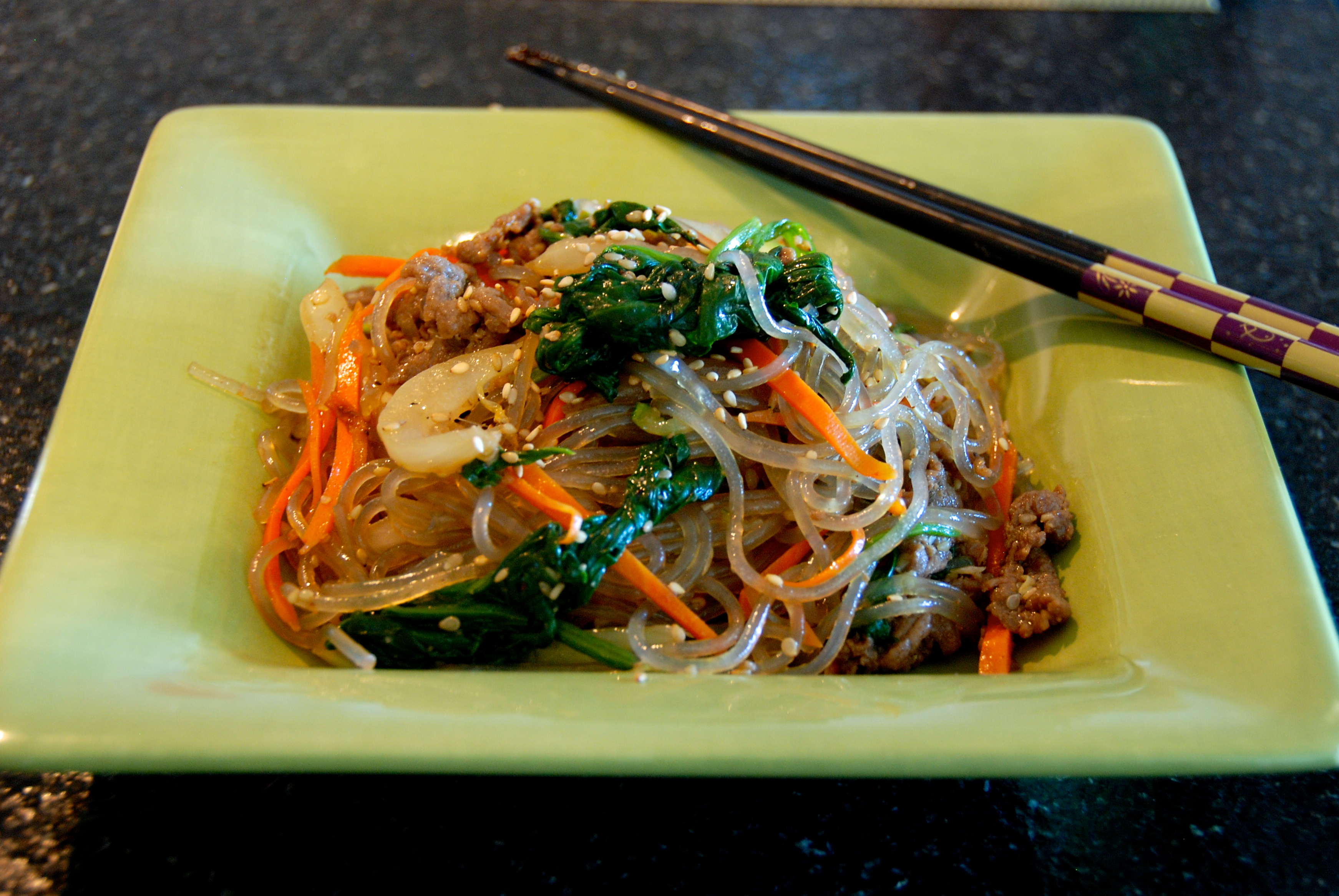 1. Combine pear, garlic, ginger, green onion, soy sauce, sesame oil, sugar, and pepper in a large bowl and mix until well-combined. Place the meat, sliced onions, carrots, and mushrooms in the bowl and toss thoroughly, pulling each slice of meat apart and massaging to ensure that everything is well-coated. Marinate for at least an hour, ideally, and up to a day before cooking, or freeze to store.
2. When you’re ready to cook, defrost if needed. Heat about a tablespoon of oil in a skillet over medium-high heat (you won’t need much). Place the bulgogi slices in a single layer in the skillet and let sizzle until browned, cooked through, and bits are caramelized. Note: You may have to do this in batches depending on the size of your skillet. Avoid overcrowding the pan so that the meat can brown nicely. Serve over rice or in ssam.