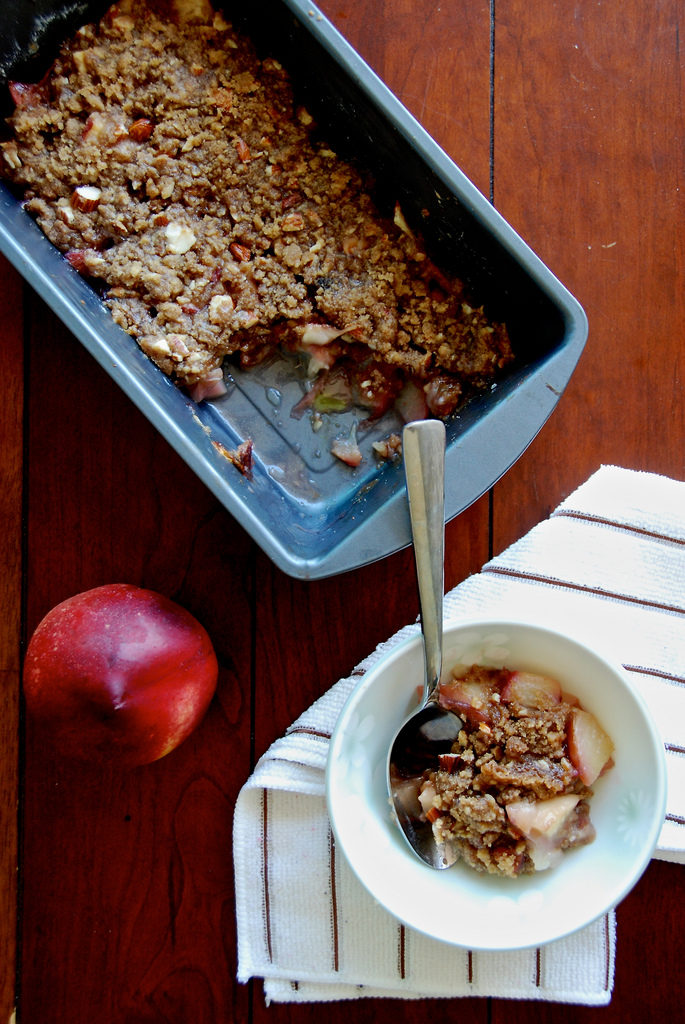 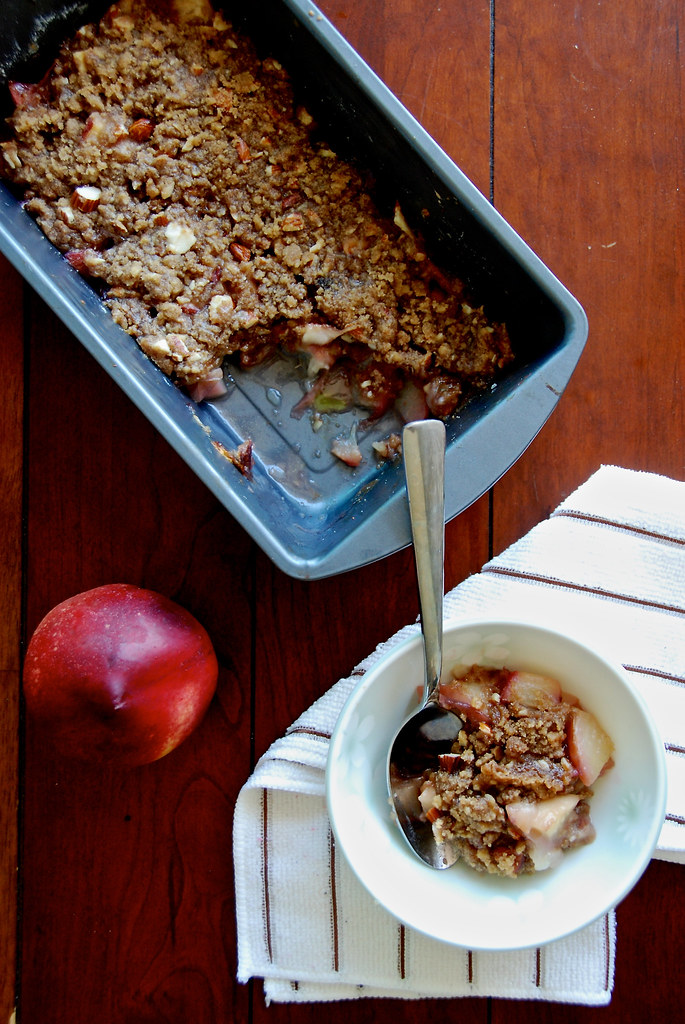 OK, so I know what this looks like. It looks like another summer recipe. (After I already posted a fall recipe, saying that it’s fall.) But it’s a really versatile summer recipe! You can sub apples and make it a fall recipe! Or sub frozen blueberries and make it an anytime recipe. Plus, some people in the world haven’t even had summer yet. And maybe some people live in a magical place where white nectarines are in season all year long. So I’m going to say it’s appropriate, and just run with it. 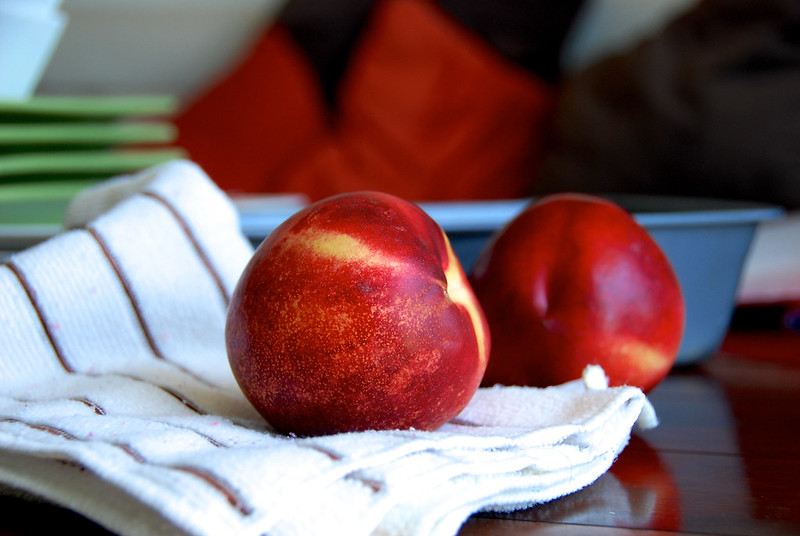 It’s just that this crisp is seriously awesome. It’s incredibly simple, so forgiving (crucial, for me and my, um, sometimes free-spirited baking), and works with endless permutations. For fall, it would work fantastically with pears, too, not just apples, and for winter, I’m already planning to make it with those frozen blueberries I mentioned (see end of post for suggested adjustments when using other fruit). 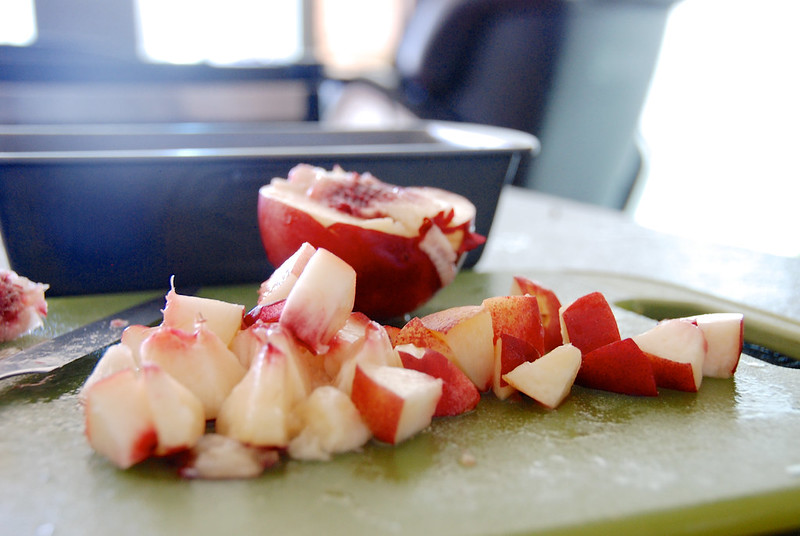 And you can take a ton of liberty with the crumble, too, before it will go wrong. For me, Bowl #2’s mom doesn’t tend to bake, so we actually didn’t have any oats, cinnamon, or butter (she uses Smart Balance spread). This crisp was the closest thing I could think of to bake with what she did have, without overloading her kitchen with things she’d never use after I left. (The other option would have been just not to bake for a few more weeks, but, let’s not be crazy here.) 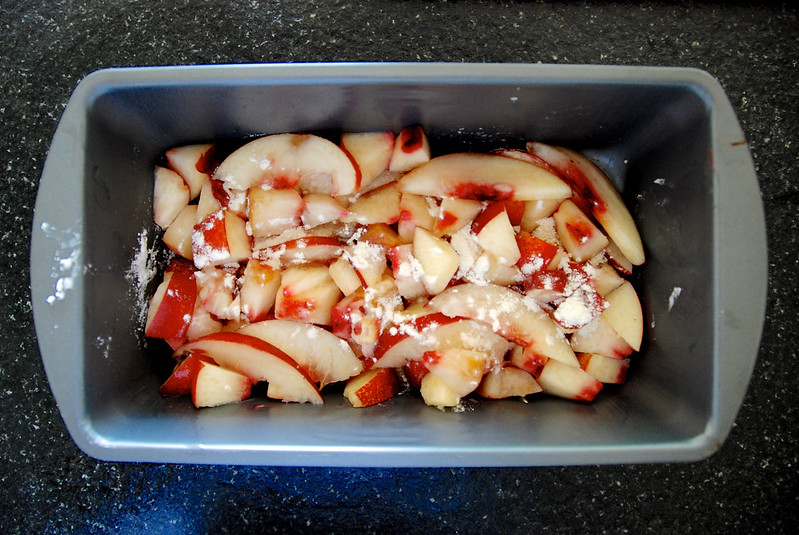 To replace the oats and cinnamon, I used a few more almonds and walnuts, and at the last minute decided to throw in the happy addition of a Biscoff cookie left over from a random pack I had. And to replace the butter, I used the Smart Balance spread — not even their butter sticks, just the good old tub.

And it all came out just fine. (It definitely could have been a bit prettier — Bowl #2’s honest commentary as I was writing this was, “It did look a little funny. Like … slop. What is that stuff you feed to pigs in the barn? Like that.” Followed by, kindly, “The picture makes it look better, though! And it was really good!” It was!)

I’ve written the recipe below the way that I would have made it at home, without the substitutions. For reference, the streusel topping in this blueberry buckle looks more similar to how I usually make it. And one last great thing about crisps — they are so wonderfully easy to reduce, portion-wise. I made about half of a standard size here, and have made a quarter portion as well that I served in two ramekins.

Mini Nectarine Crisp
yields about four servings, in a 4×8 loaf pan, or four 8 oz ramekins. Can be easily halved to serve two in individual ramekins, or doubled for a 8×8 baking dish. Note: See the very end of the post about adapting this for other fruits.

for the filling:
2-3 nectarines (about 2 cups, diced or sliced)
2 tsp flour
2 tsp sugar, depending on the ripeness and sweetness of the fruit
pinch of kosher salt (optional)
pinch of cinnamon (optional)

1. Preheat oven to 350 degrees. In a medium bowl, toss sliced nectarines gently with flour, sugar, salt, and cinnamon until evenly coated. Omit the sugar if the fruit is very ripe and sweet. Pour the filling evenly into a 4×8 loaf pan or divide evenly into four ramekins.
3. For the topping, combine all the other dry ingredients — sugar, flour, oats, almonds, cinnamon, salt, and any other add-ins you like (walnuts, nutmeg, random cookies, etc.). I added in a stray Biscoff cookie, crushed into crumbs. Next, cut the butter or butter substitute into small pieces and toss in the mixture. Mash together with your fingertips (or with a pastry cutter, if you aren’t stuck in kindergarten like me) until the mixture becomes crumbly. For best results, use cold butter — warm or melting butter will not result in as crumbly of a topping. And, as I’ve mentioned, butter substitutes will work fine.
4. Sprinkle the topping evenly over the nectarine mixture in the pan.
5. Bake for 30-35 minutes, or until the crisp is bubbling around the edges and the topping is golden and crisp. Let cool for 10-15 minutes, then serve! Pairs awesomely with ice cream or yogurt. 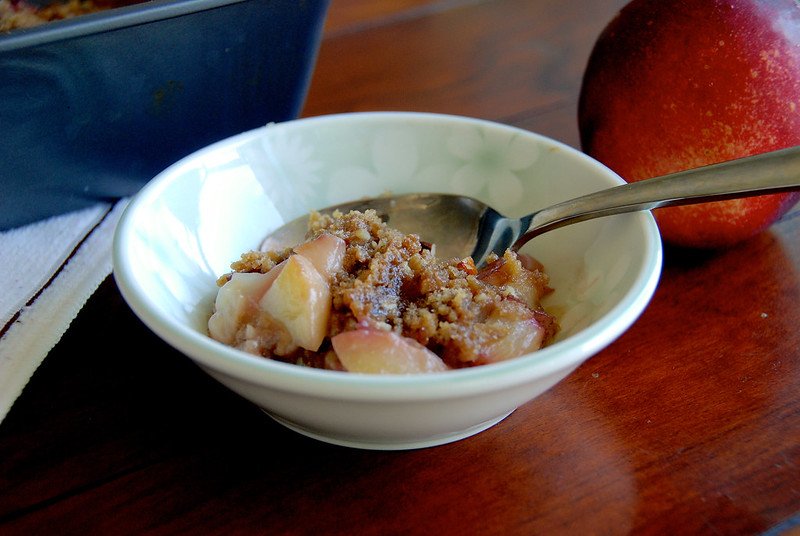 Notes: If using apples or pears, peel, core, and chop enough for 2 cups’ worth (usually about two large or three medium/small apples or pears). I would use smaller pieces than for a peach or nectarine crisp. Make brown butter by melting two tablespoons of butter in a saucepan over medium to low heat until it turns brown and smells nutty. (Don’t worry if it turns too dark — some, like Adrianna at A Cozy Kitchen, suggest that burned butter lets the brown-butter taste shine through even better.) Pour the butter out from the pan into a bowl and let cool briefly. Toss apples in the flour, brown butter, cinnamon, and salt, then follow the same directions as above for the topping. I up the cinnamon considerably in both the filling and topping for an apple crisp, because, cinnamon.

If using fresh blueberries, strawberries, or raspberries, simply replace nectarines with 2 cups of the fruit. If they’re frozen, increase the flour by a few teaspoons to compensate for the water released and to result in a thicker filling. I’ve also seen suggestions to replace it with cornstarch.

Lastly, the crumble topping can be made ahead in bulk and frozen. Just bring to room temperature before baking. (In fact, I believe you can put this all together and freeze it unbaked, but I’ve never tried that.)

For other excellent crisp recipes, check out this strawberry-raspberry crisp by Joy the Baker, a healthier blueberry crisp by Taste, Love, & Nourish, this fantastic-looking brown butter white peach crisp by A Cozy Kitchen, and another vanilla brown butter variant, a pear crisp with vanilla brown butter by Smitten Kitchen. Edit: And, by coincidence, a genius microwaveable apple crisp for one that’s vegan AND gluten-free, posted today by Averie Cooks! Microwaveable! For one! Is there anything you can’t do, Averie? 🙂 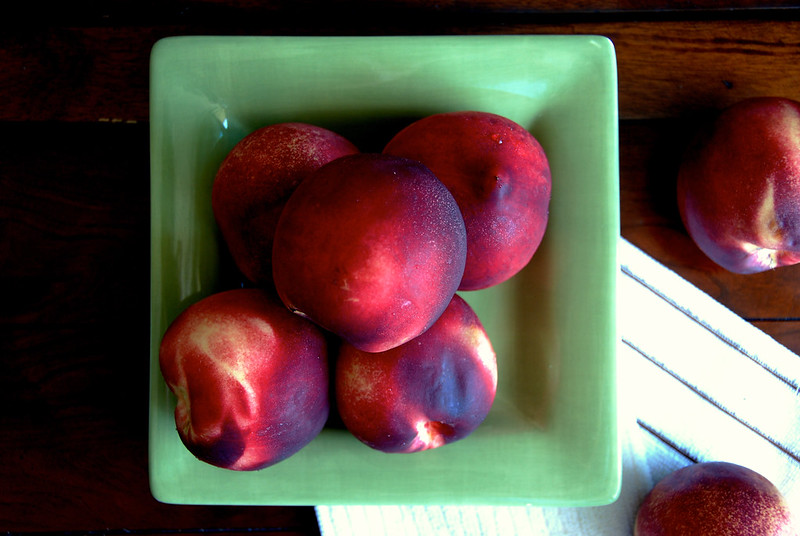