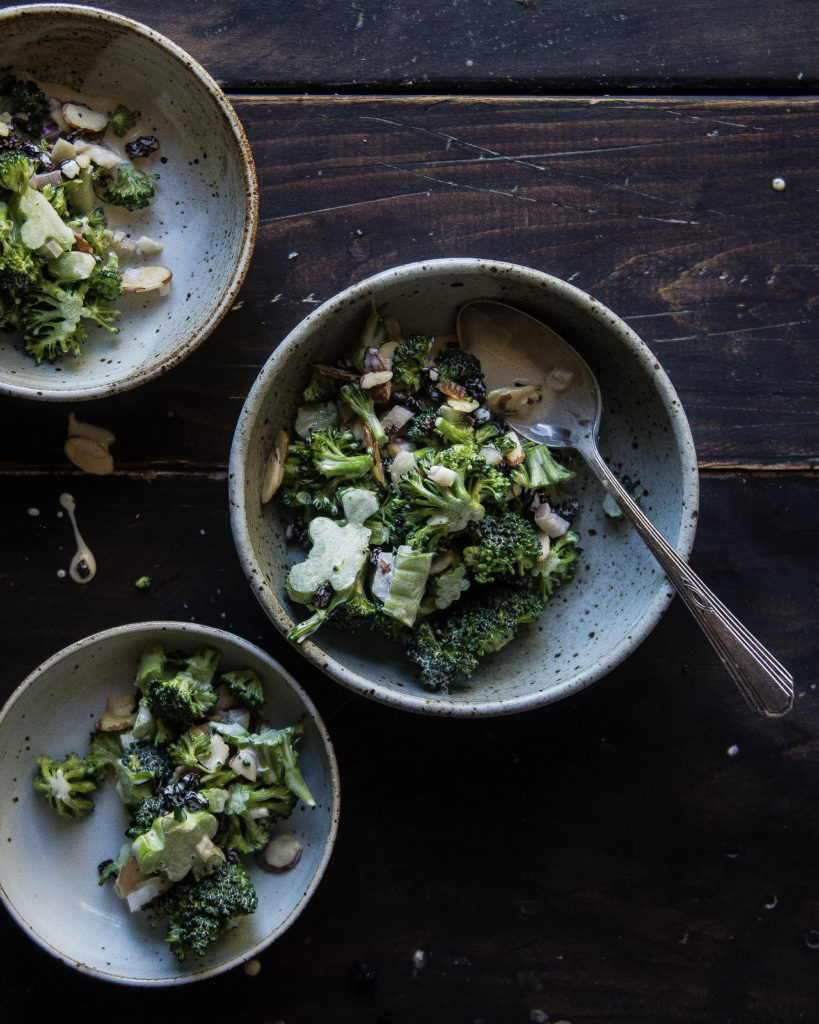 Last weekend we took our first big trip with B3 in tow, up to Berkeley for my brother’s graduation.  It wasn’t until we were on our way back, winding our way through the mountains on the last stretch of the I-5, that I realized how much Los Angeles has started to feel like home.  This little ham can probably take most of the credit for that (isn’t that how the saying goes?  “Home is where the diaper pail is”?) but whatever the reason, sometime over the past year this sprawling city has stopped feeling foreign and unusual, with its bleached asphalt and vast robin’s-egg skies, and started feeling familiar.  That said, after  7 hours of driving on the two lanes of the I-5 amidst weaving cars and semi-trucks that I swear are bigger here than elsewhere (and, by turn, feeding a 6-month-old in Jack-in-the-Box parking lots along the way), I suspect conquering that real-life edition of Toad’s Turnpike will make any destination feel a little more like home.

I first made this broccoli salad back in October, when things here did still feel foreign and unusual, and our place had a sandalwood-y new-apartment smell that I only get vague whiffs of these days.  It’s based on a banchan I had at a Korean barbecue restaurant with a friend (on my last outing, as it turned out, before B3 came along).  Korean banchan, this one included, sometimes has a curious but happy tendency to veer towards the creamy and sweet, and I loved this crunchy, sweet-and-savory creamy broccoli salad so much, and was so forlorn that there were only a few florets’ worth of it on the little plate, that we ended up getting seconds and then even thirds to take home.  (Extra banchan to take home!  Living the dream.)

I recognize that this salad is hardly about to win any popularity contests, given that it peddles not only oft-reviled broccoli but also the ofter-reviled raisin, but it ticks off all the things I like about a dish — a mix of bold textures, an unapologetic sweetness from brown sugar in the dressing and, yes, the raisins (or currants, or dried cranberries, if you prefer!), a good dose of savory balance from the almonds and the onion, and a brightening tang from the lemon in the mayonnaise and a touch of vinegar.  It makes a giant Tupperware full of crunchy salad that disappears before you know it (and I suspect it was my sole source of iron in the last week I was pregnant).  Now that picnic season is creeping around the corner, I can’t think of anything more perfect to tote along in a cooler.  I hope you (if you, too, are the rare breed who likes both broccoli and raisins) enjoy it as much as I do. 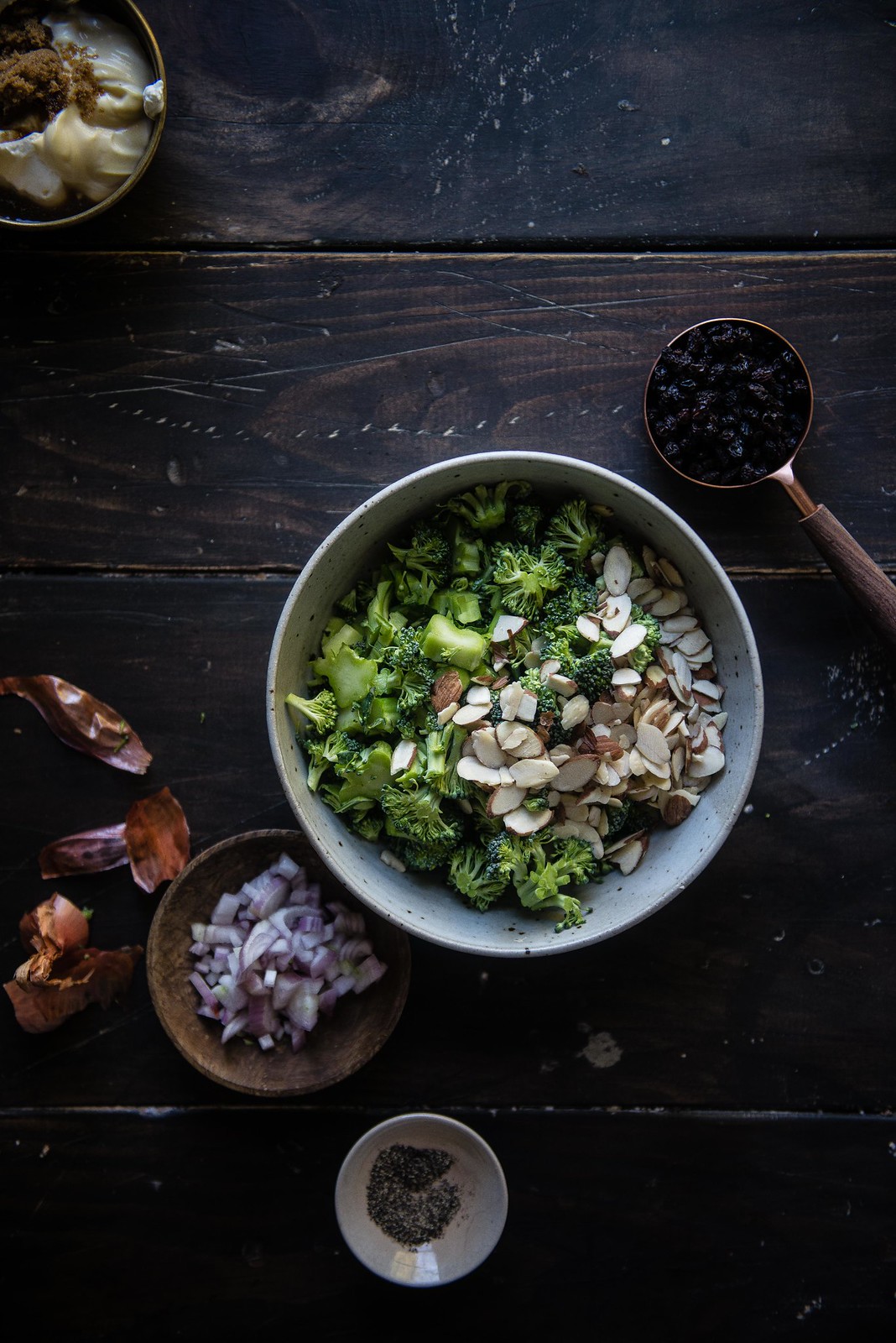 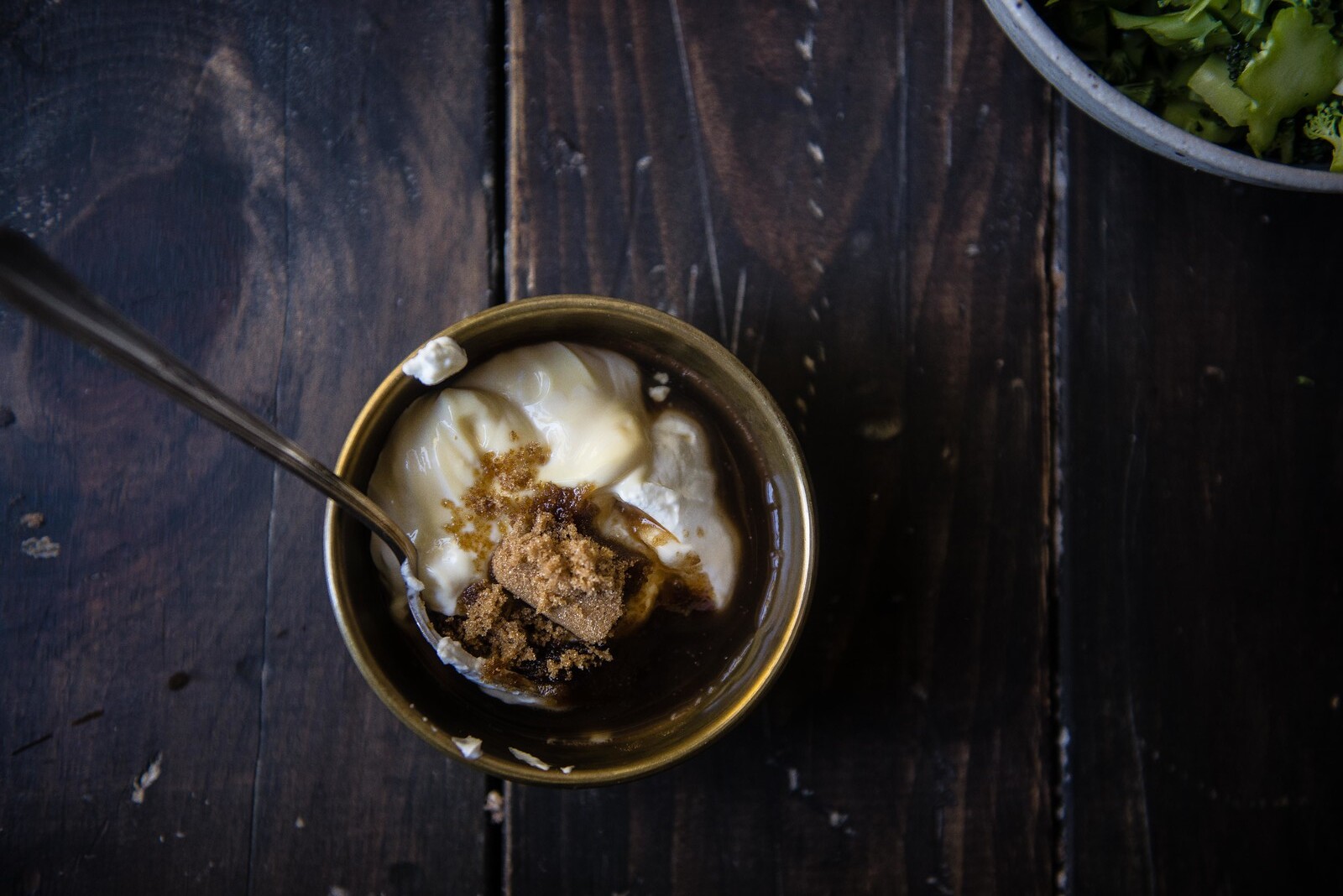 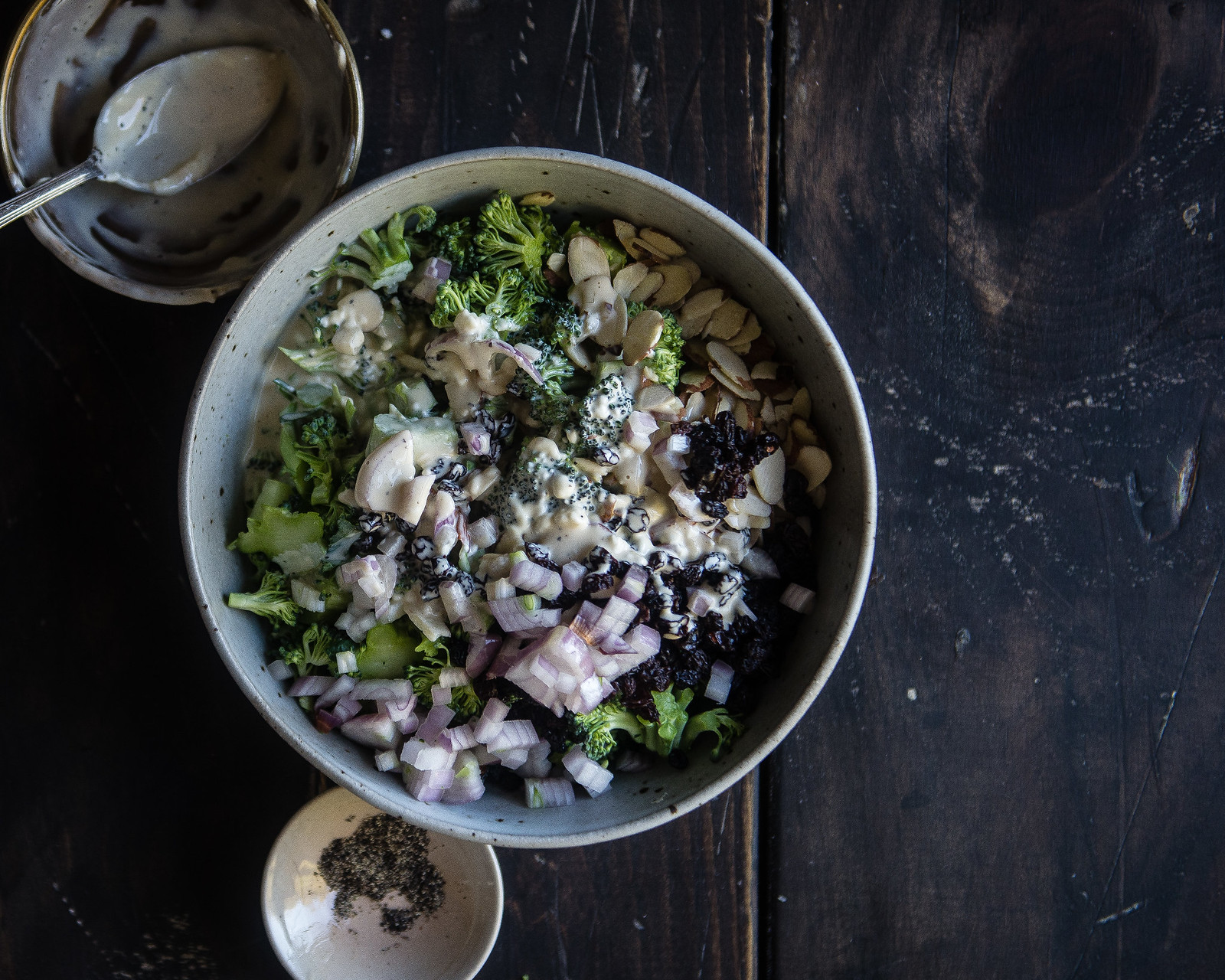 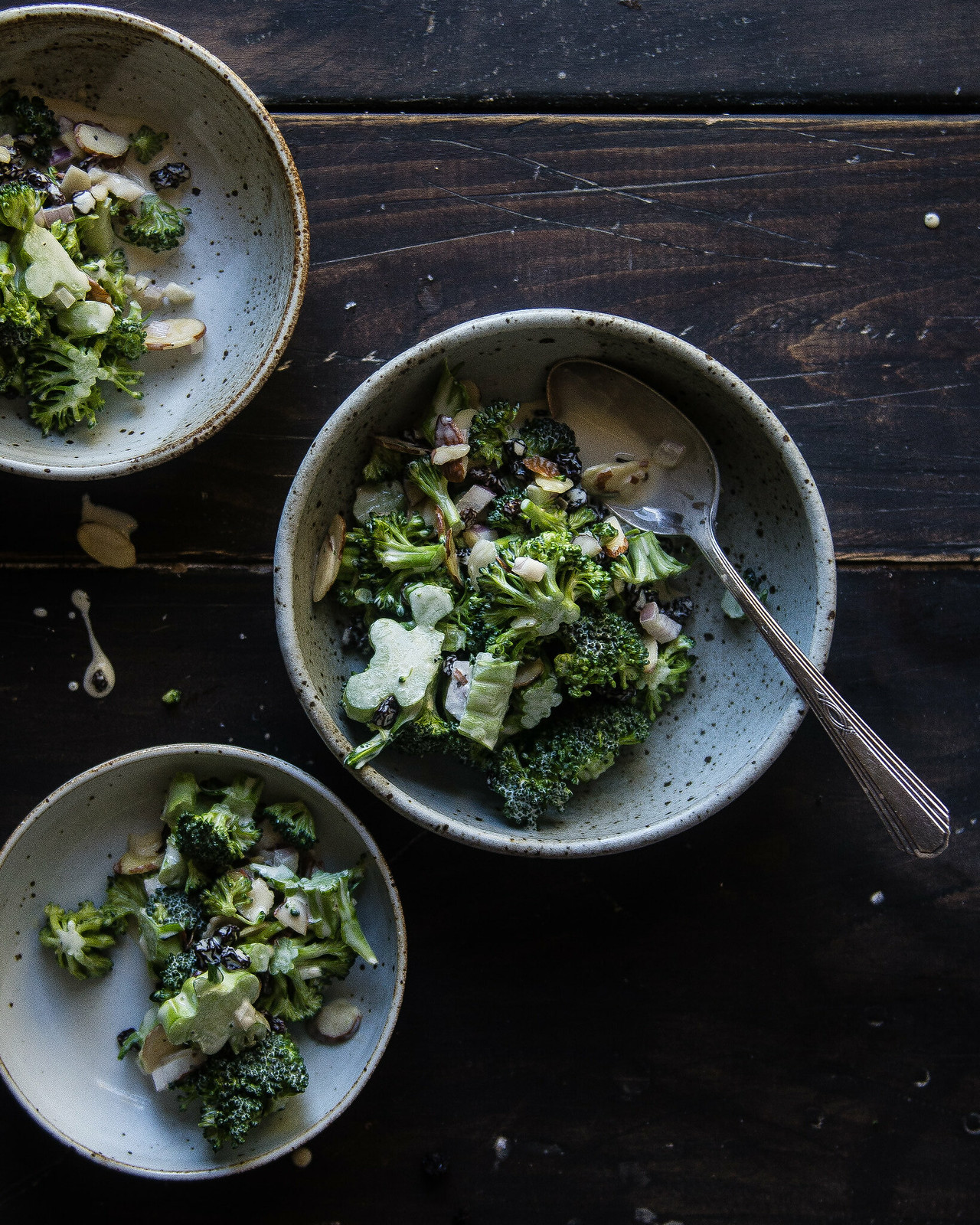 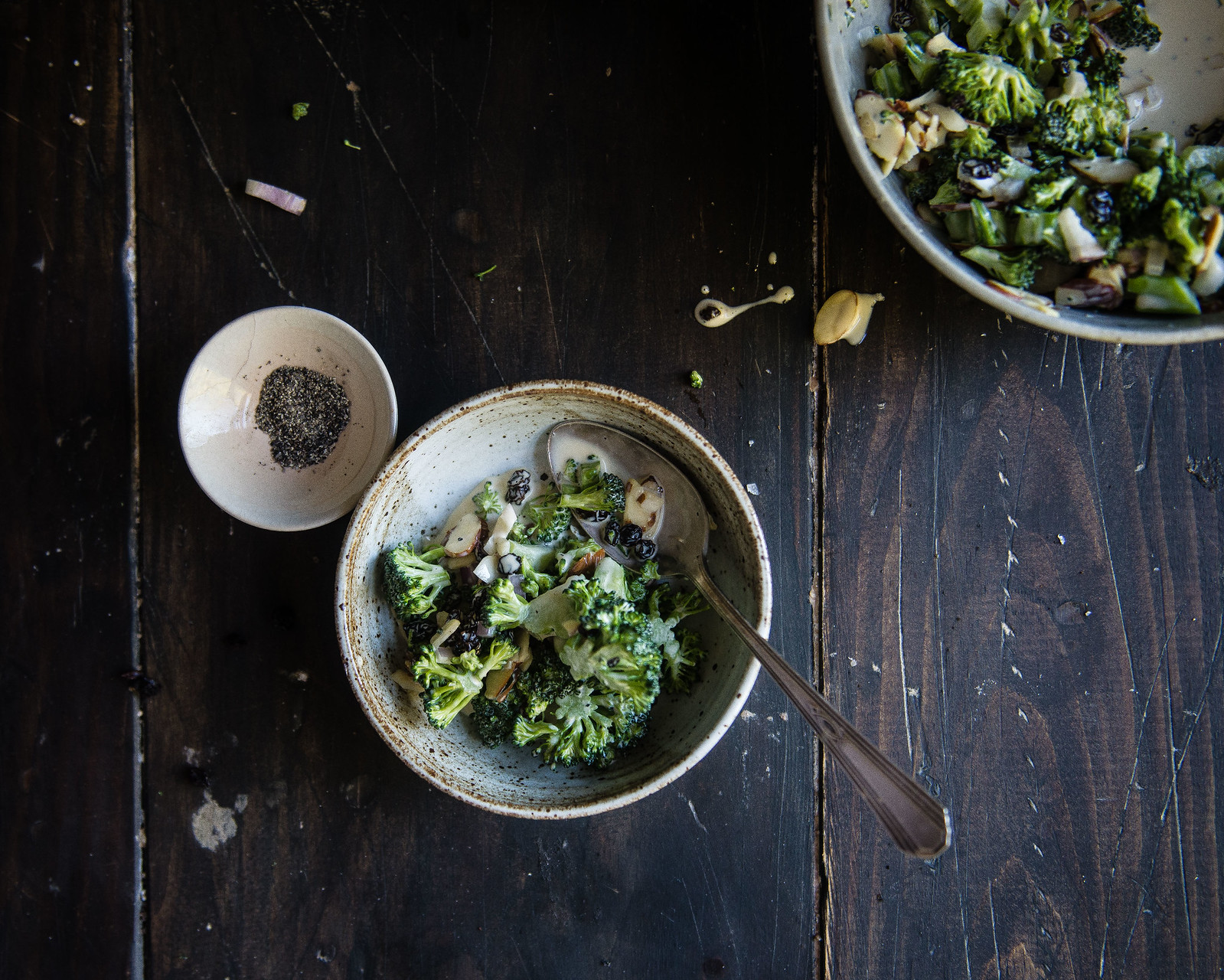 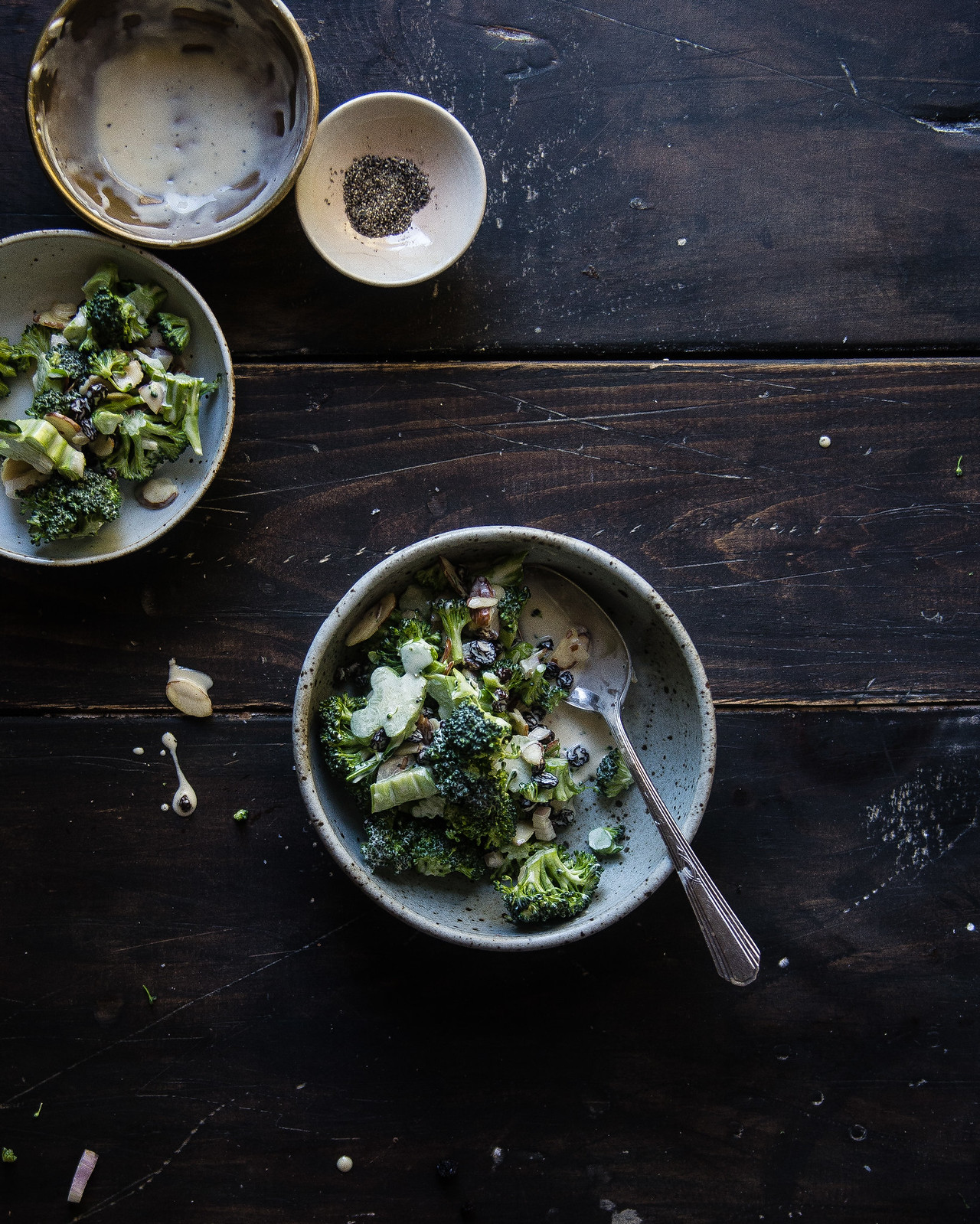 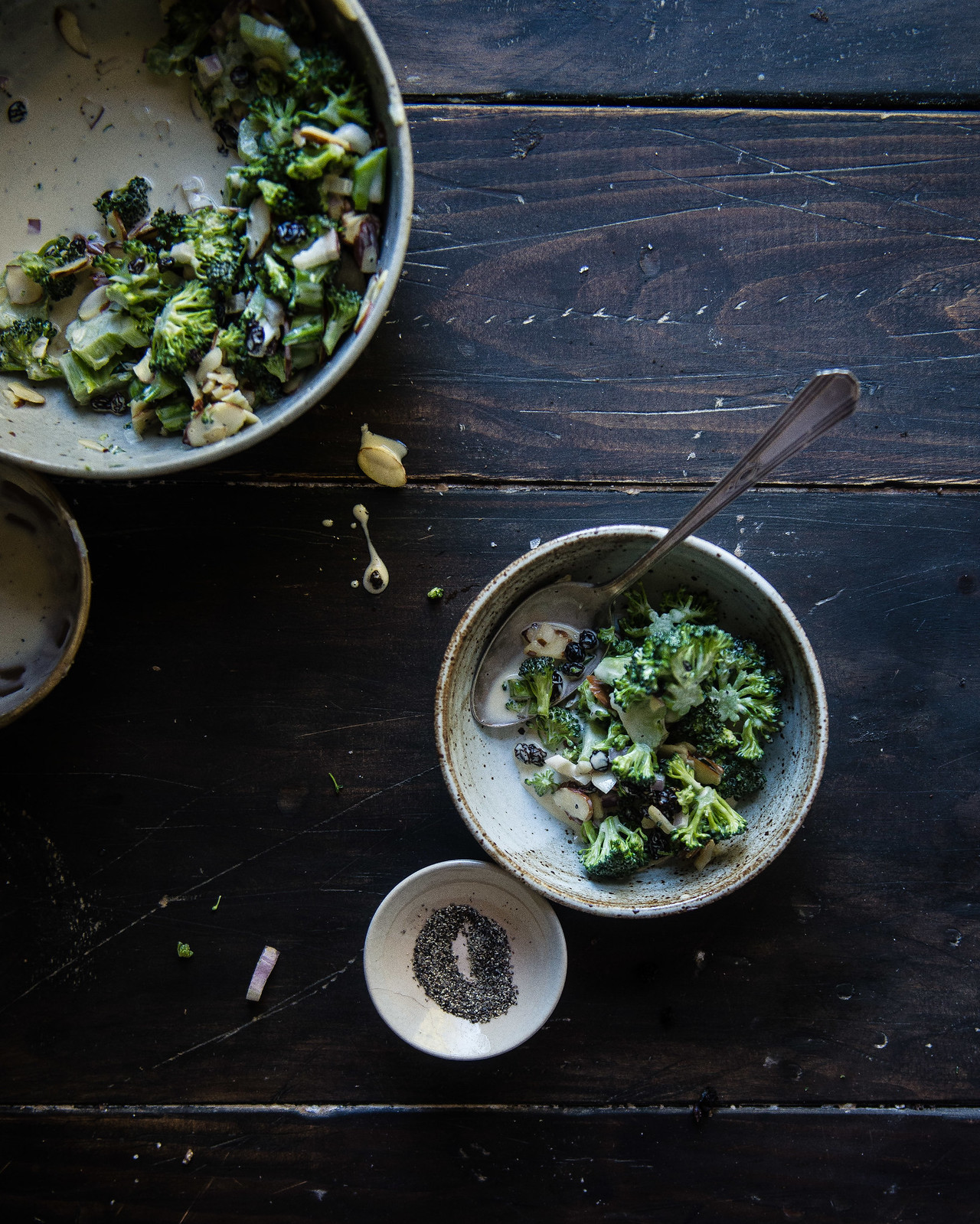 As is very often the case, when I come upon something I instantly want to learn how to make at home, it turns out that Deb at Smitten Kitchen has long had a recipe for something uncannily similar. This is very lightly adapted from her broccoli slaw, and inspired by the broccoli salad banchan at Quarters (where they serve you cheese with your barbecue! Whoa.)