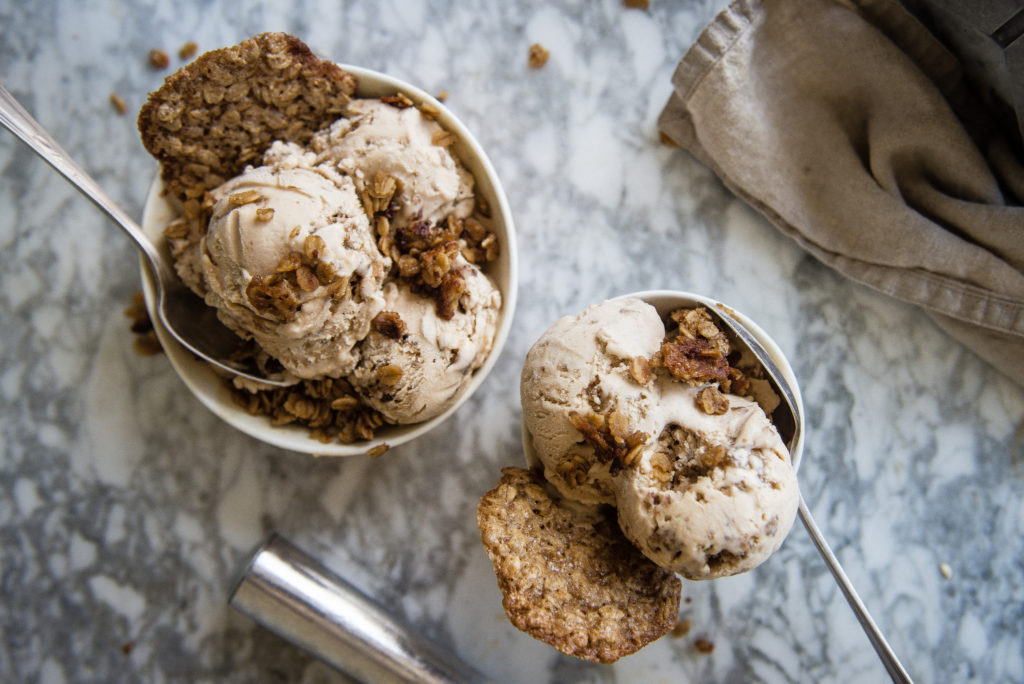 Overwhelmingly, pregnancy thus far has been a much more peaceful experience than I ever thought it would be. This isn’t to say that it’s been a total walk in the park (in case you’ve had or are having a rough one!) but before it all happened, I had fearful visions of hugging the toilet, or raging at B2, or doing both at the same time, nonstop for nine-point-five months.  Thankfully, neither of those things has come to pass. If anything, with the exception of a few spectacular sobbing-laughing-hiccuping meltdowns (“I k-know I-I’m l-laughing but it’s not funny!”) I might even be a little bit more rational than my non-pregnant self, which is a bizarre development we never anticipated. Then again, my non-pregnant self once Donkey-Kong-ground-pounded a half-eaten bag of B2’s potato chips because he hates eating chip crumbs and I was mad. (This was not my proudest moment.)  So maybe there was nowhere to go but up.

If there’s one thing that’s taken my baby-growing life by storm, though, it’s pregnancy brain. Was this as real for you as it is for me? Our apartment is beginning to look like a really boring reenactment of Memento — there are Post-Its all over the house, written by my past self and asking in accusatory caps: “IS THE AC OFF?” “IS THE OVEN OFF?” “DO YOU HAVE YOUR WATER BOTTLE?” like a stern, disembodied mother. And this is just a short list of the things that I (can remember that I) have forgotten, or lost, or missed:

To be fair, I’m a tad forgetful on the best of days, given that B2 has spent countless minutes of his morning life waiting patiently by the door while I chant “work phone, regular phone, security pass, wallet, laptop, keys, and lunch!” and touch each one like a talisman before we can head to work every morning. But, even if opinions may differ on whether pregnancy brain is a myth or reality, I have to imagine that I’d be a compelling case for the “reality” camp. 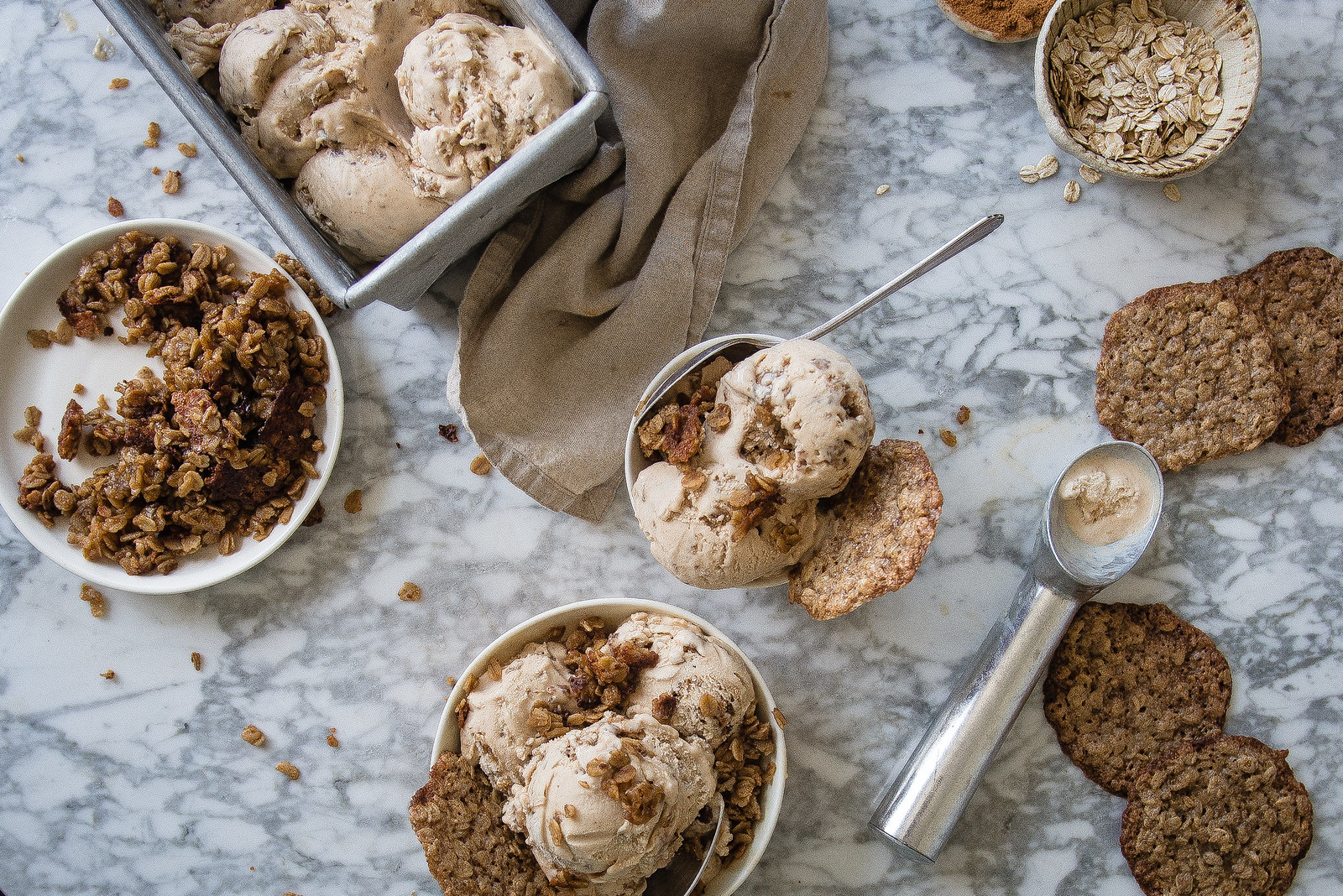 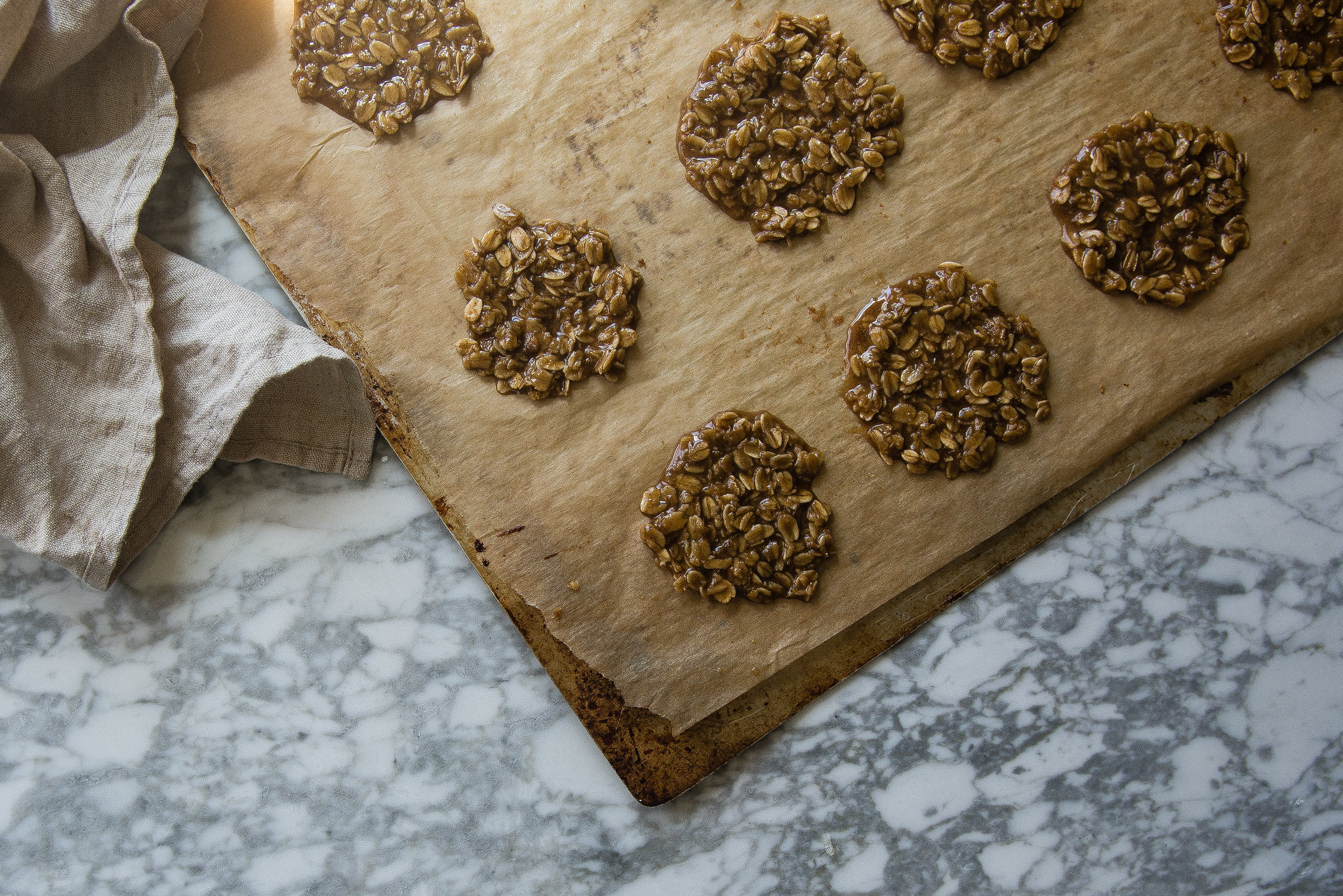 All in all, this has yet to result in anything too terrible (I even got my phone and my security pass back, hurray) but I did wonder if I’d be sharing this oatmeal lace ice cream with you before the summer was long gone.  I forgot for about three weekends in a row either to put the ice cream bowl in the freezer the night before, or to make the ice cream base with enough time for it to chill. But I did finally make it!  And thank goodness, because this ice cream is so, so very good.

I first had Nonna D’s Oatmeal Lace Ice Cream from Ample Hills Creamery on an unusually balmy November last year in Brooklyn. We sat outside as the store was closing and got a “flight” of six flavors, and although I was (typical) “full and just wanted a bite,” I had to try with every fiber of my being not to snatch this entire scoop from everyone else once I’d tried it. It’s a rich, impossibly warm cinnamon-brown sugar ice cream, with all the holiday-spiced roundness of Christmas morning cinnamon rolls, but on top of that, it’s shot through with an abundance of toffee-like oatmeal lace cookies, which turns it into a magical, toasty butterscotch-ed confection that’s somehow appropriate for summer, fall, and winter all at once. Full disclosure, I’m one of those people who loves oatmeal raisin cookies so much that I have occasionally been known to pick them over chocolate chip (I know, I know!) in a dessert spread, so I’m partial to cinnamon and oats and brown sugar in any form, but I think this flavor could convert even the chocolatiest of chocolate chip fans.

Having now moved couple thousand miles away from the nearest Ample Hills, I thought it was time to make a version at home, and found, to my delight, that they’ve published their recipe for this incredible ice cream in their cookbook. This isn’t exactly the recipe that appears there, only because I tend to prefer making eggless ice cream bases, but the bones of the recipe are all theirs — plenty of brown sugar and warm cinnamon, with butterscotch-y oatmeal lace cookies that are thin and shattery and full of toasty oat and buttery flavor. Because I can never leave well enough alone, I did try one version with regular oatmeal raisin cookies (again, my oatmeal cookie fixation), and I had the hardest time deciding which one I liked best, but in the end that version tasted just a bit too “floury,” and B2 preferred the recipe below — in his words, the regular oatmeal cookie version was only if you “really, really liked oatmeal.” Lest my oatmeal cookie bias get the best of me, I felt that was pretty decisive.

I hope you enjoy this as much as I did! And if you have any pregnancy stories, pregnancy brain or just in general, please tell me! Worst parts of being pregnant? Best parts? I’d love to hear.  Thank you, friends, for reading. 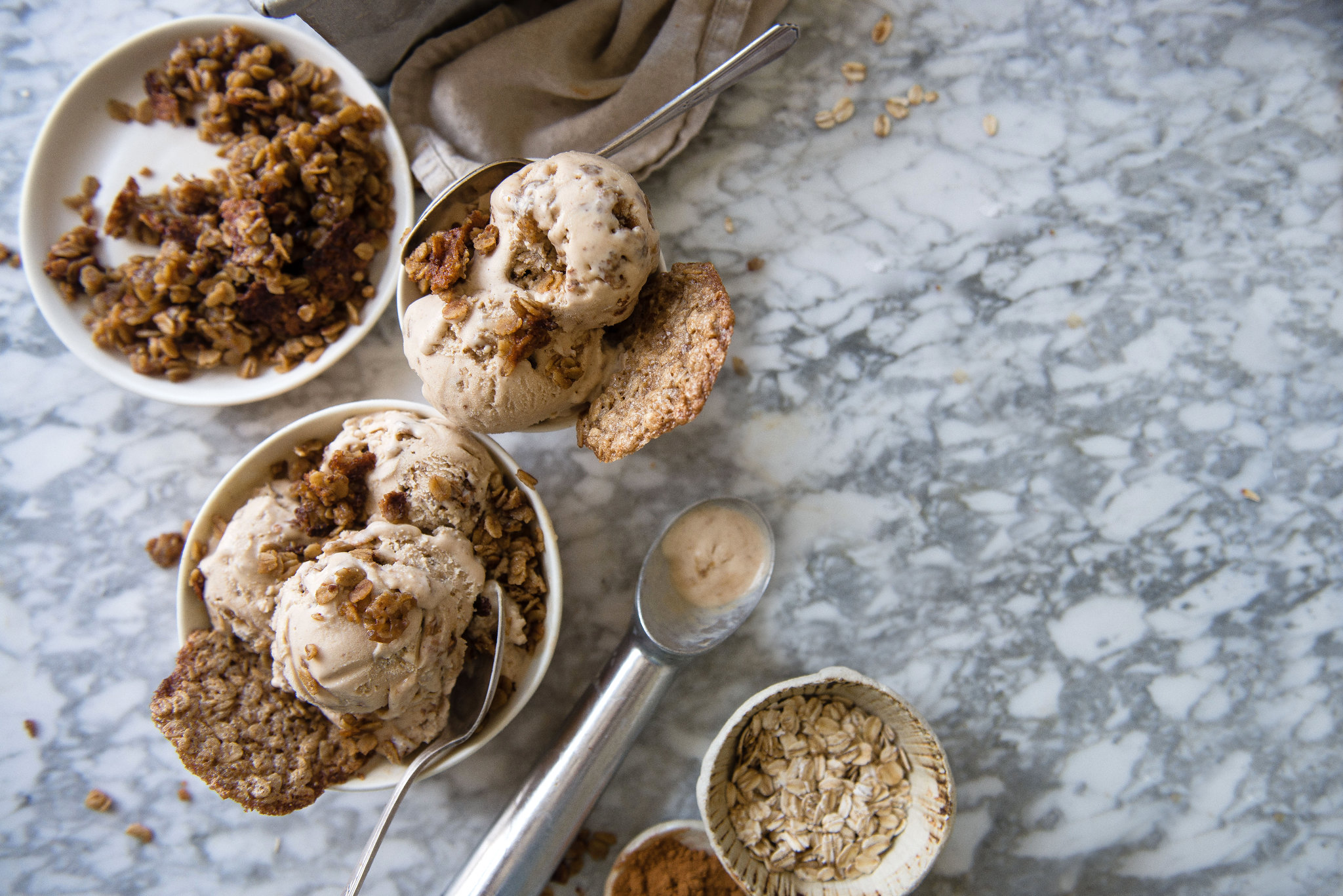 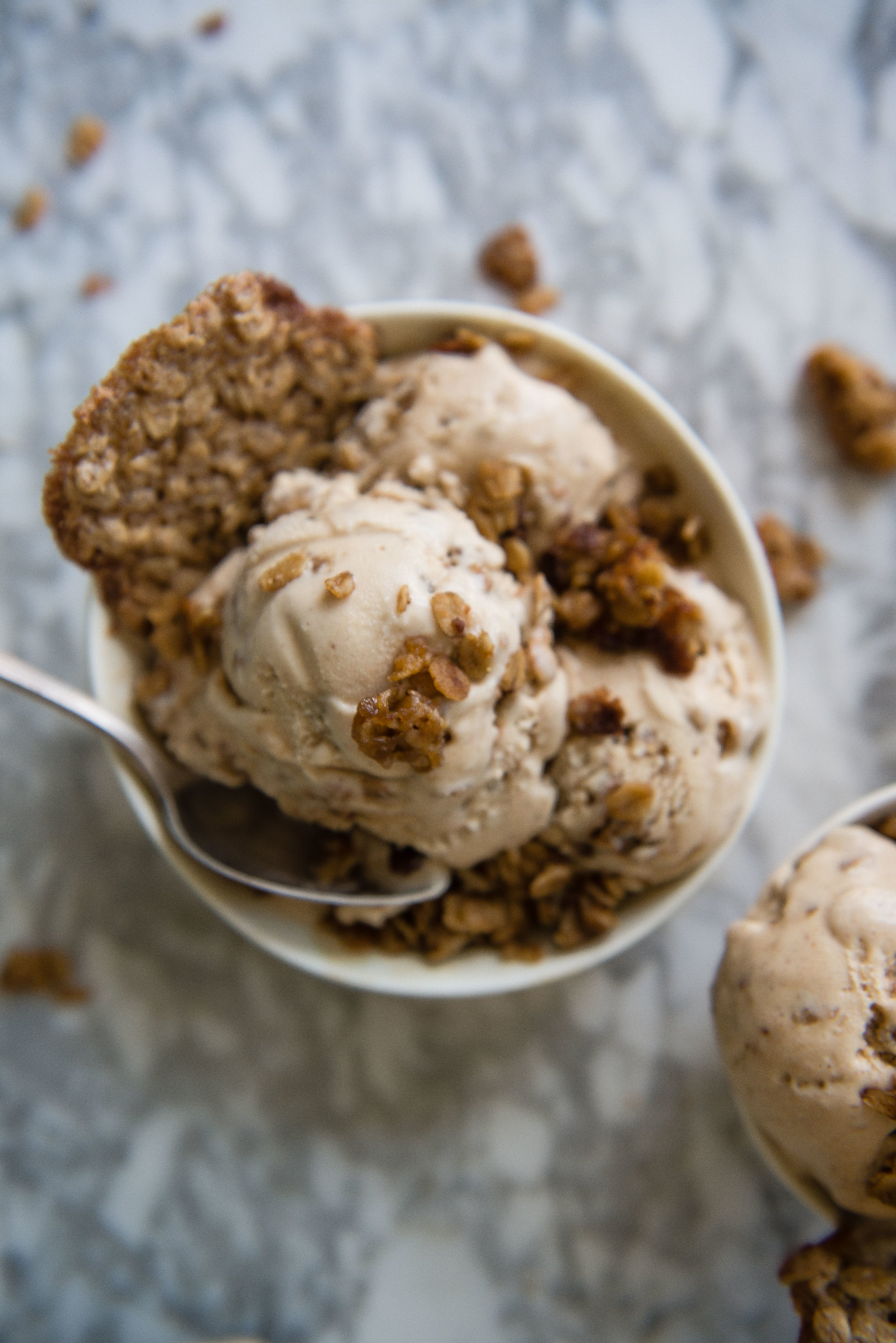 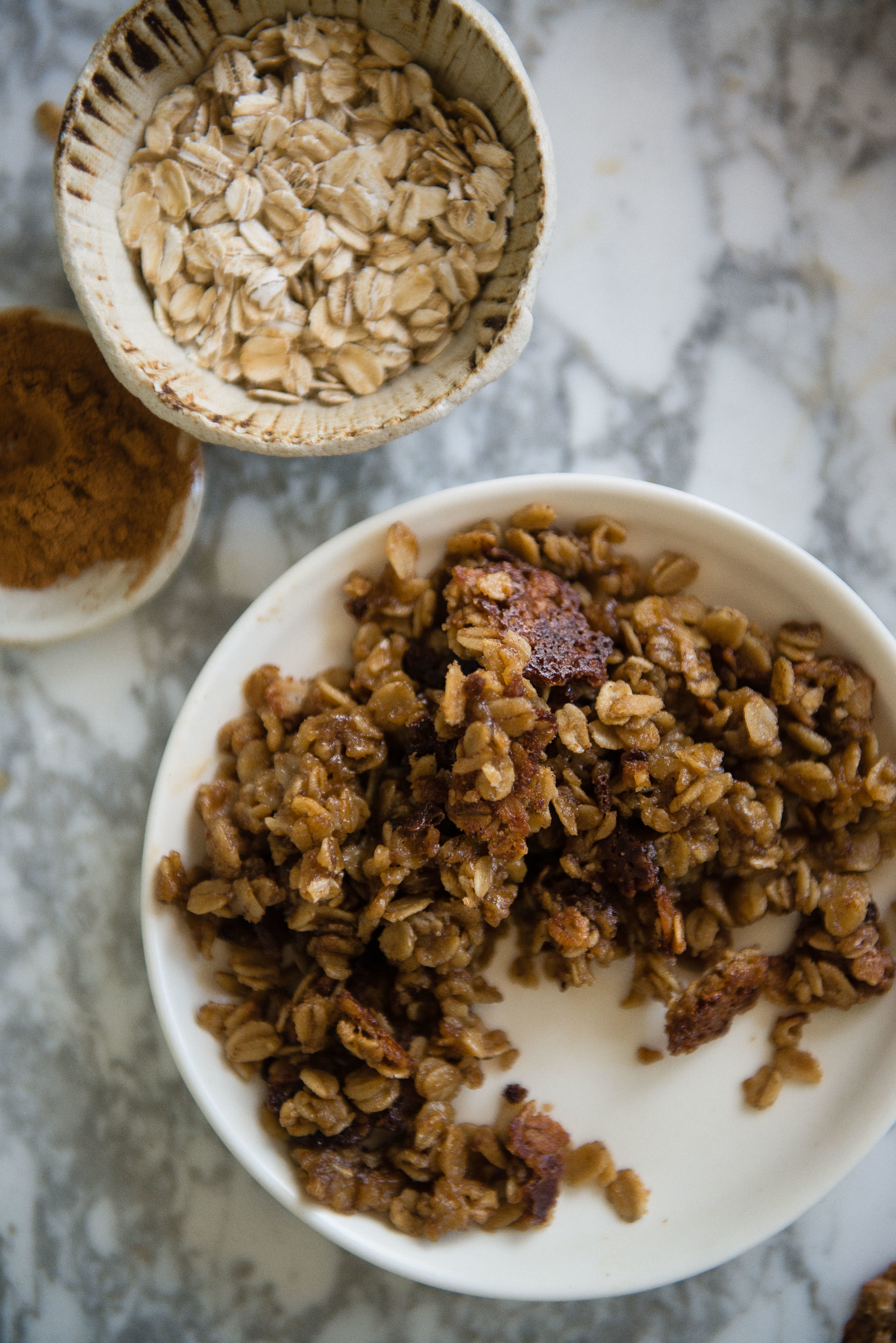 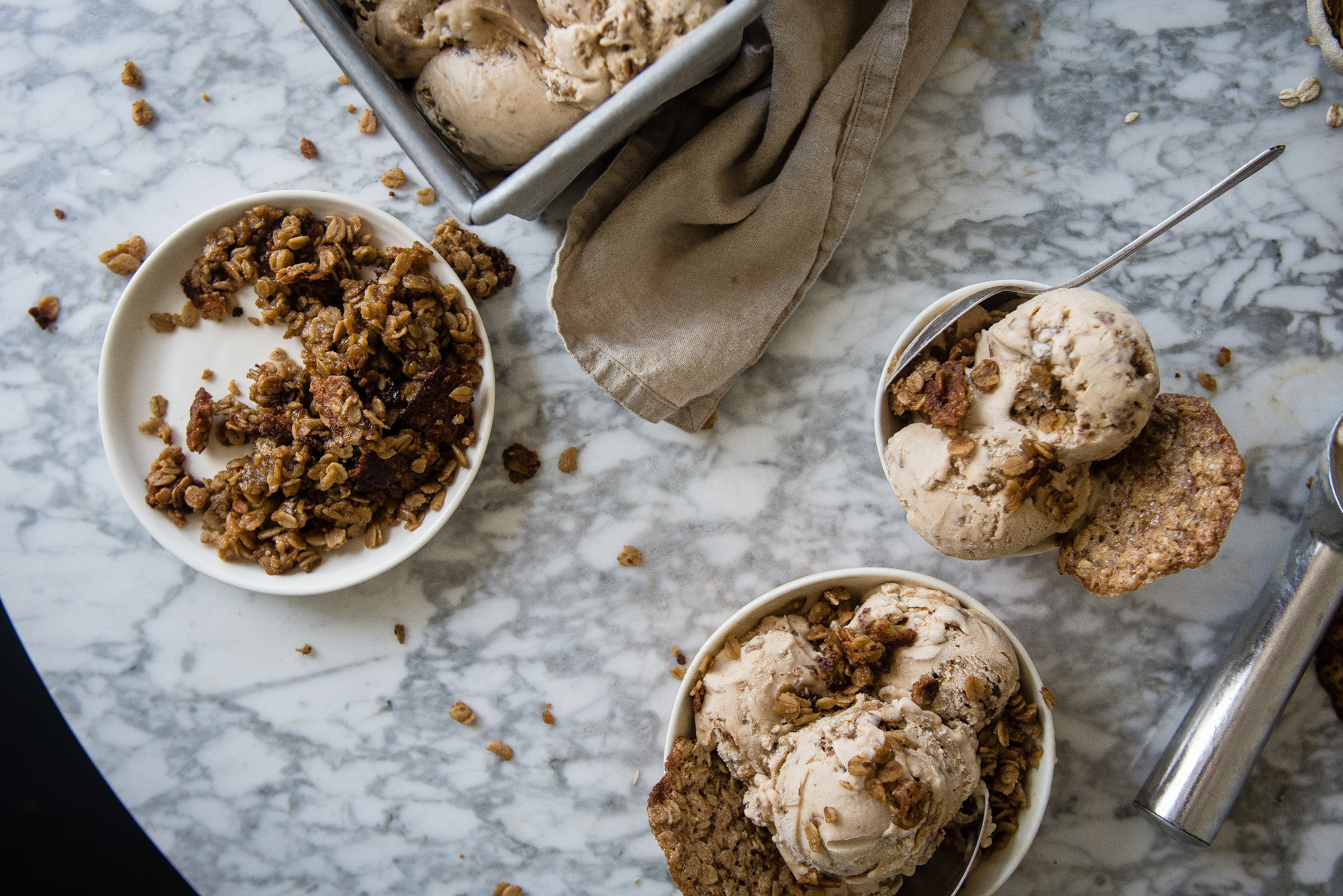 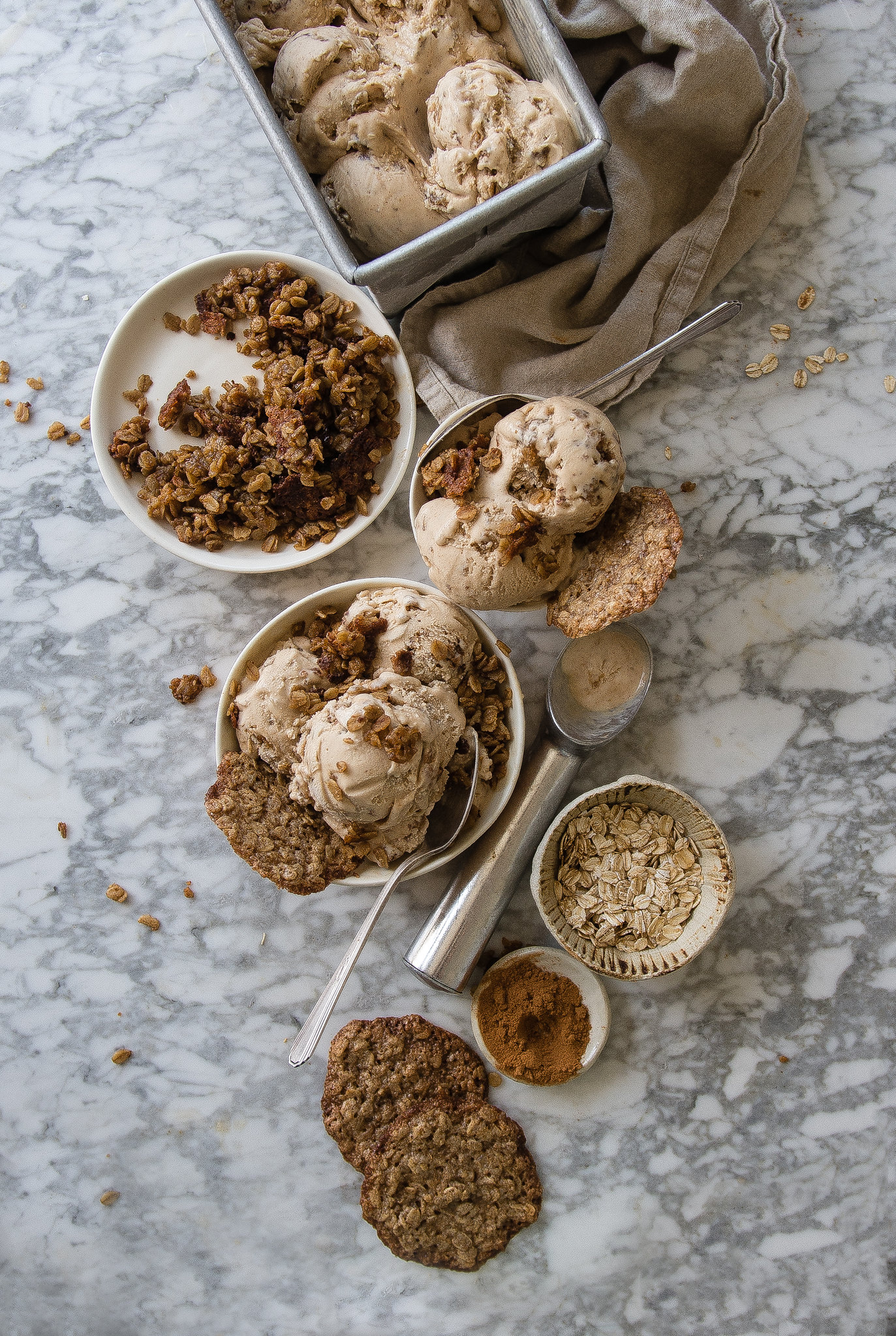 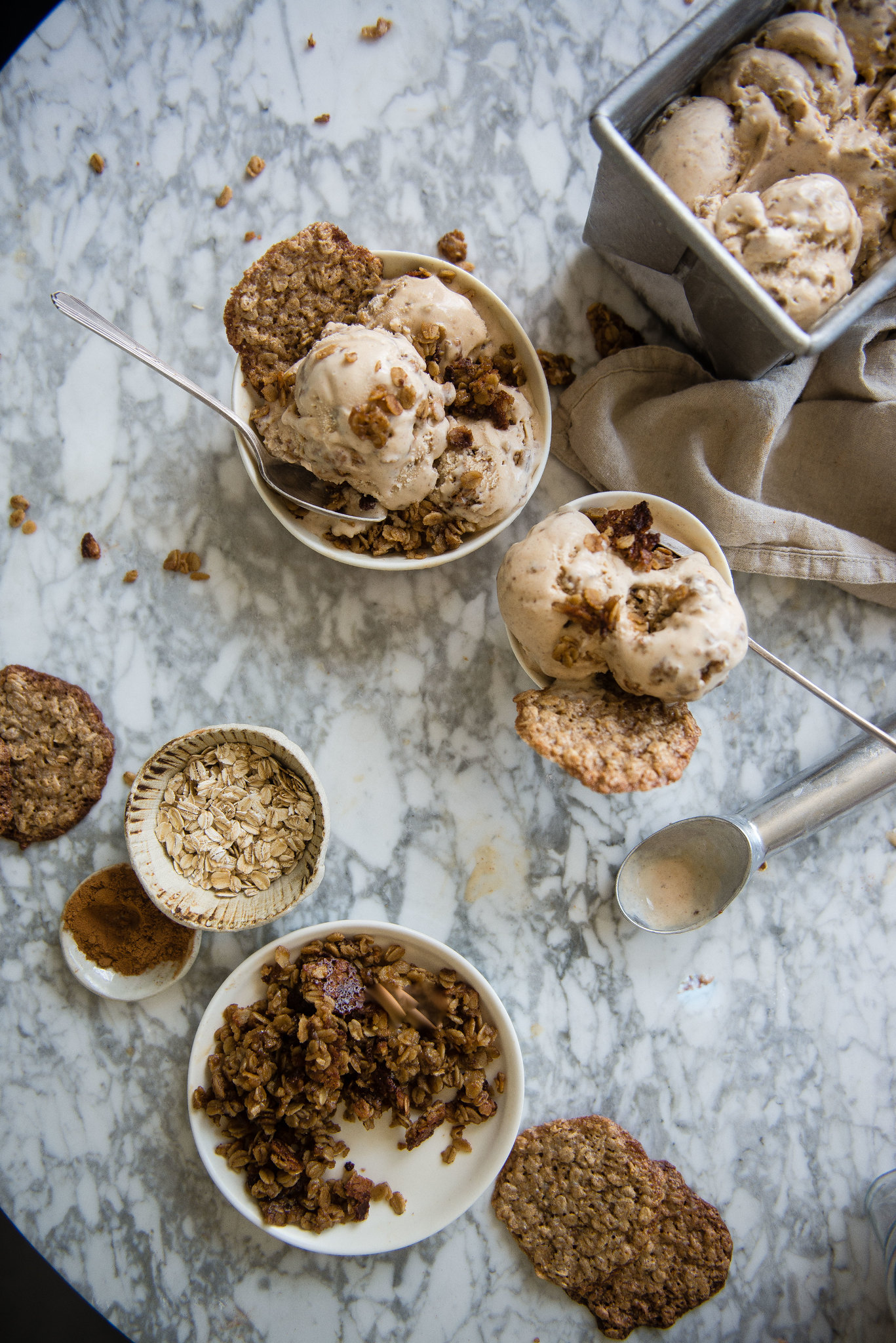 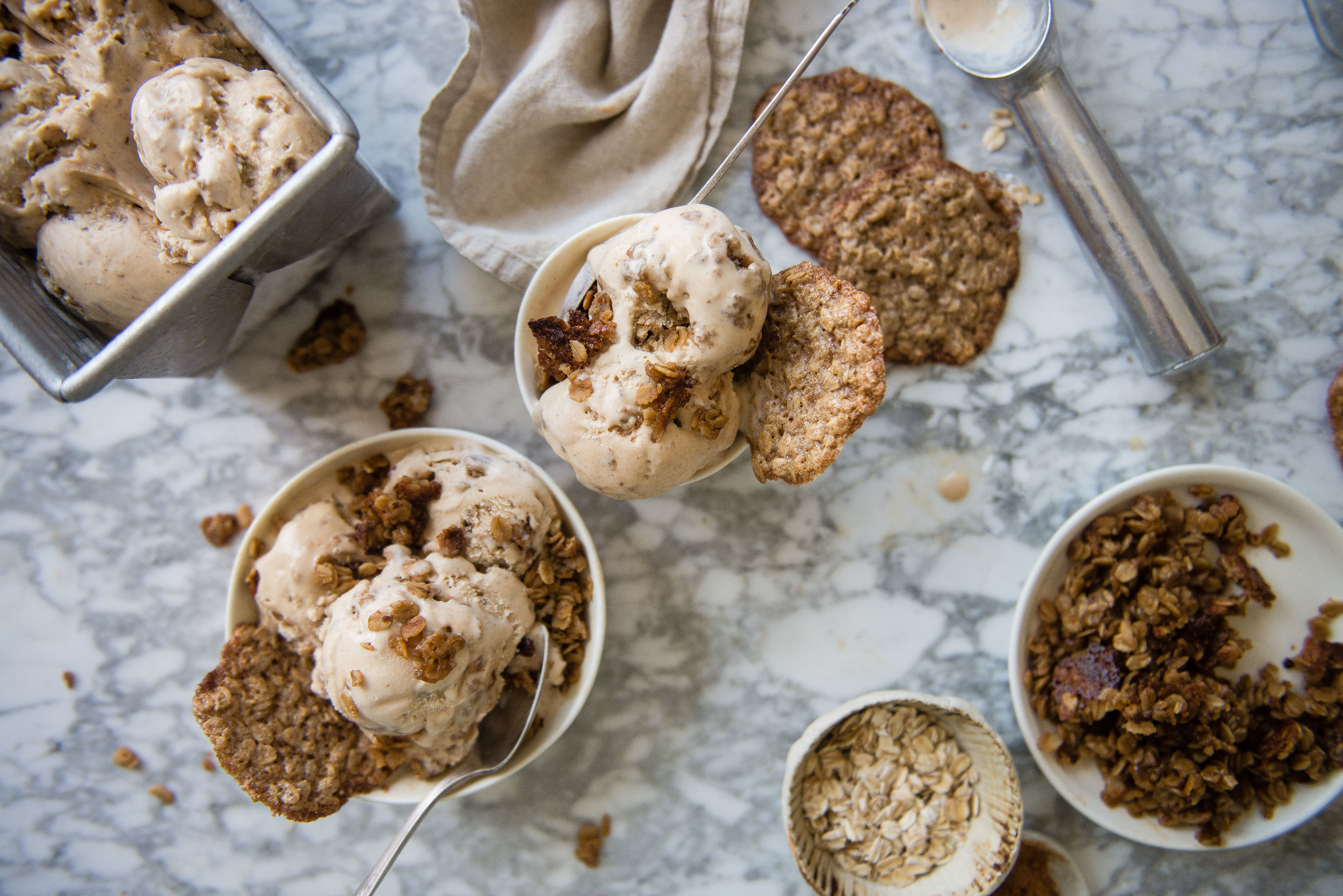 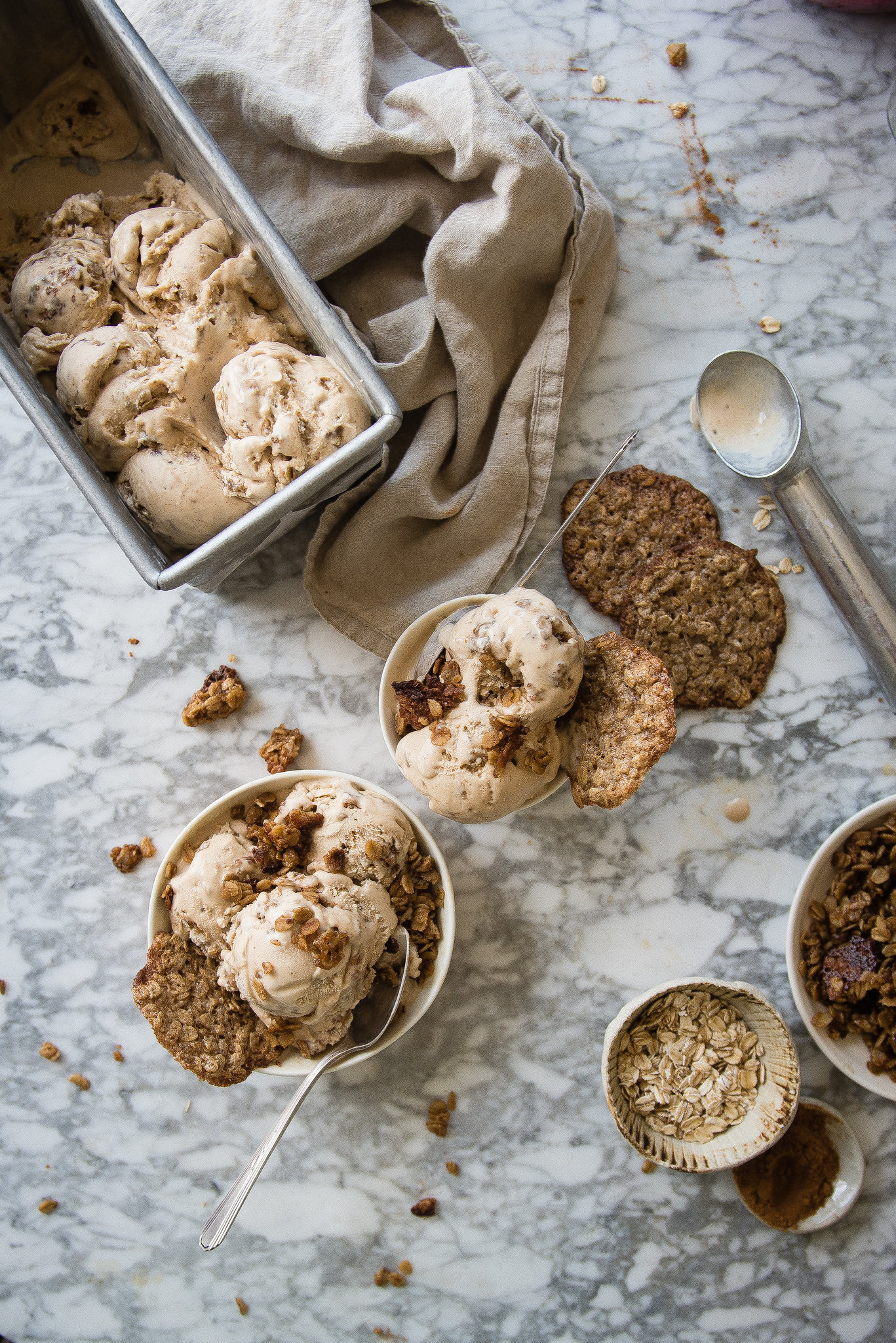 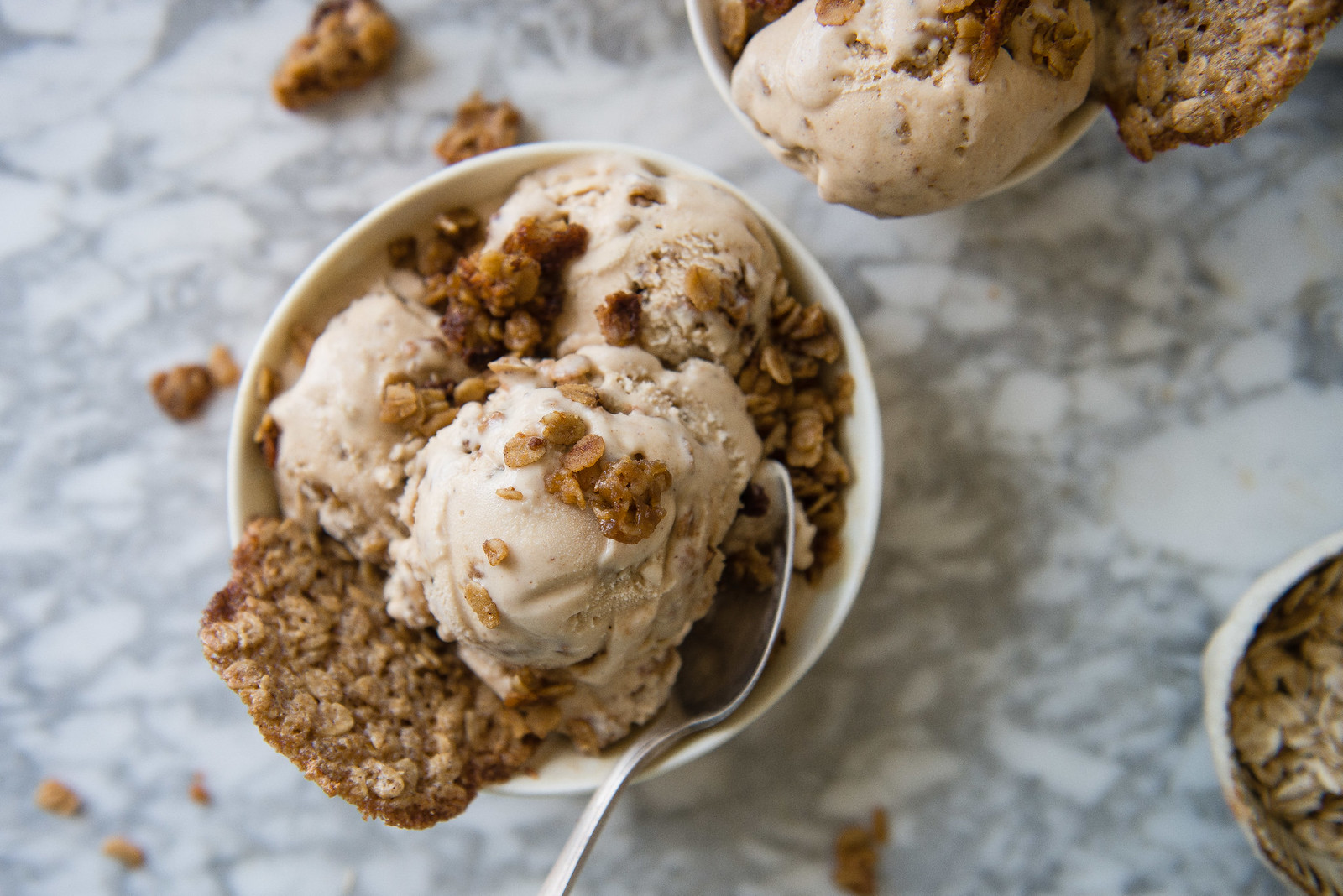 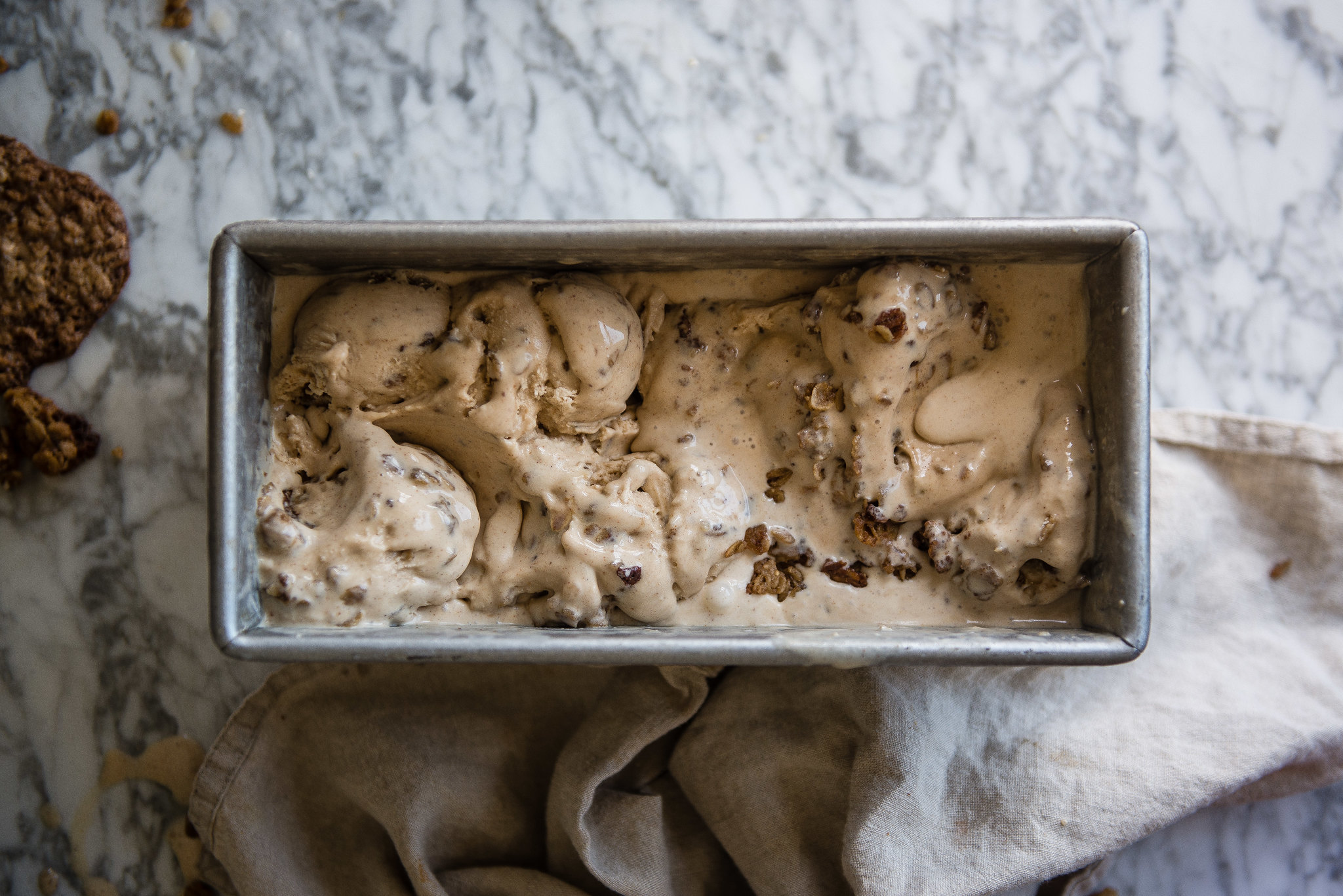 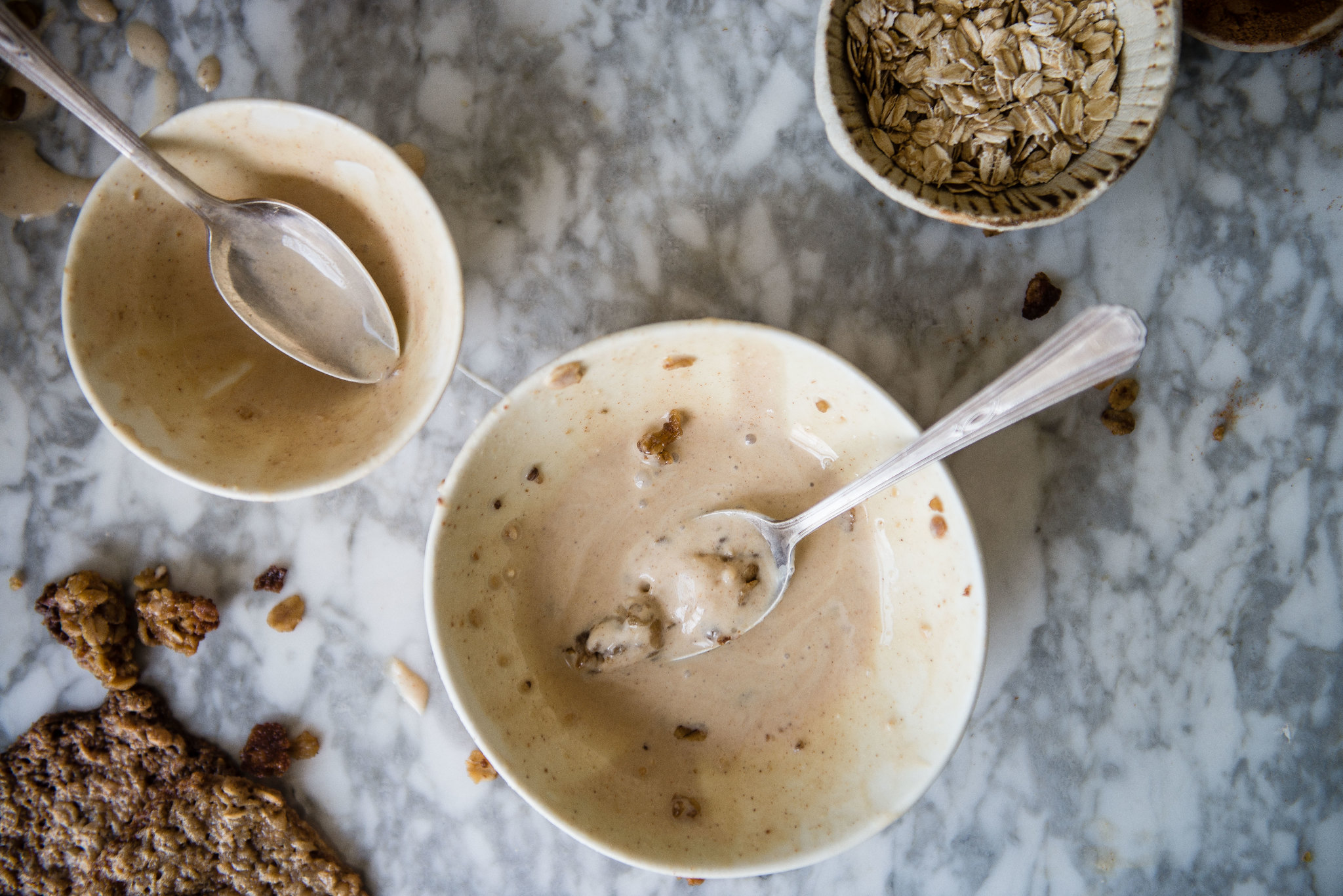 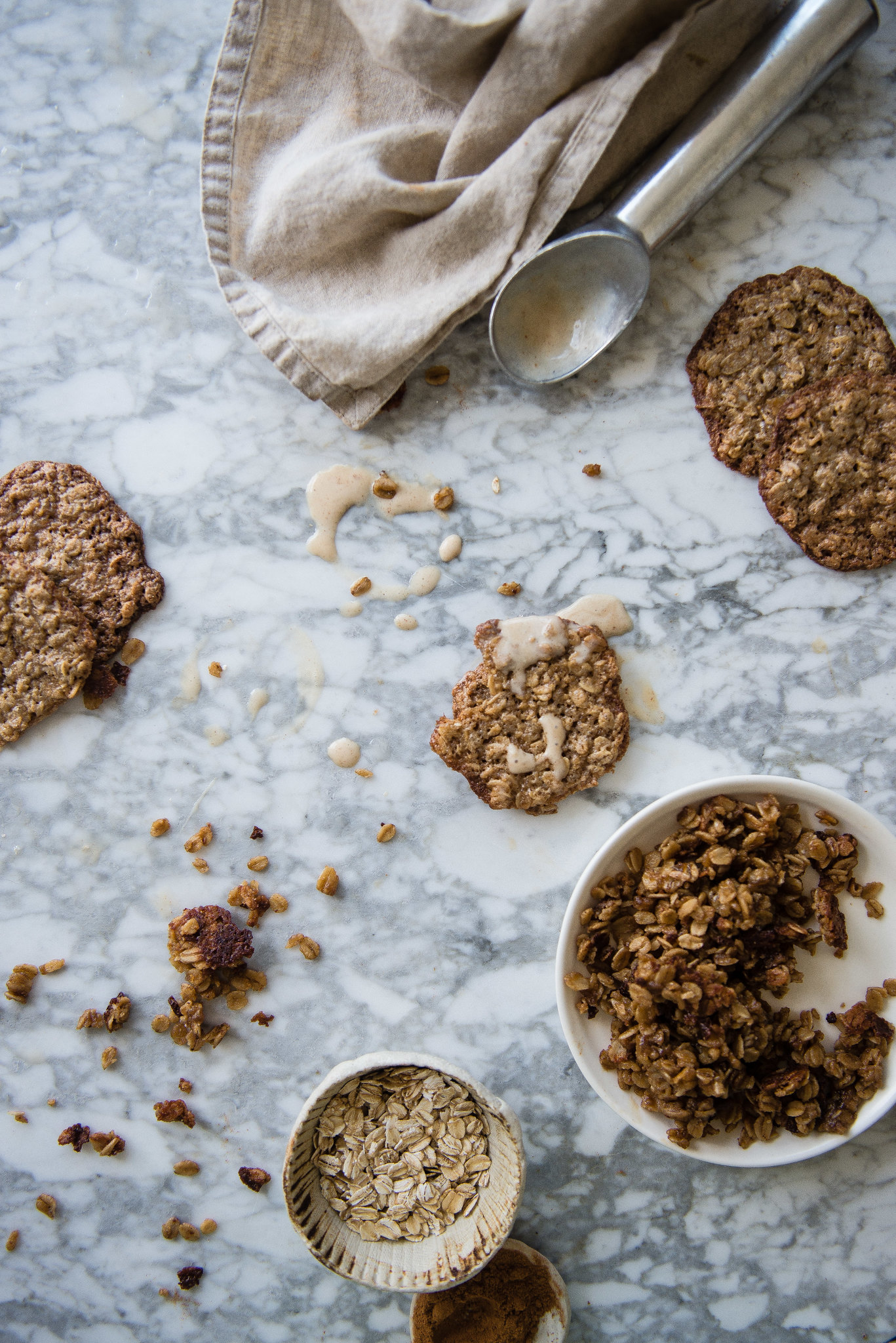 Adapted from Ample Hills Creamery and Jeni’s Splendid Ice Creams. The brown sugar cinnamon flavor with an oatmeal lace cookie mix-in is all Ample Hills, but I’ve always loved Jeni’s eggless ice cream base for its texture and ease of preparation (rest easy, egg whites), so I borrowed a bit from both ice cream empires for this recipe. If you’d like to opt for the traditional custard ice cream base, the original recipe for Nonna D’s Oatmeal Lace Ice Cream can be found here, via Dinner: A Love Story. I found that a half-batch of the cookies was more than enough for mix-ins and to use as topping, so the cookie recipe below is halved and adjusted accordingly.