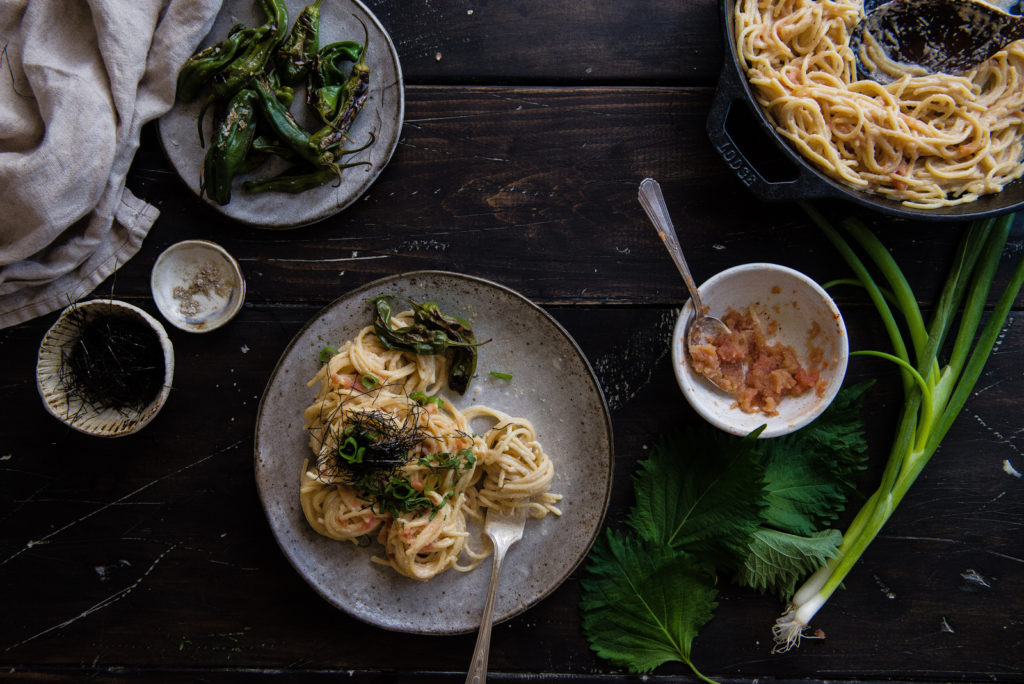 In the last week or so, in what seems to be the norm for this time of year, B2 and I have been basking in a much-needed respite from a couple of busy months at work. Mostly this has consisted of me procrastinating all my non-urgent responsibilities by streaming the Olympics for most of the day (while B2, by comparison, texts me at 11am that he has done everything he needed to do and is wondering how “to be more productive”), before zipping home and landing on the couch in comfy clothes while the sun is still high in the sky. We’re spending our long evenings mostly enjoying our quiet, bright apartment, marveling at how it’s possible we can already be in the third trimester, and trying really hard to get B2’s hand on my belly in time to feel B3 bopping around like a caffeinated frog (somehow harder to do than it should be with all of the punch-dancing and caroming back and forth that he’s doing each day).

We’ve also been spending more time cooking at home on the weekdays than we used to back in New York, where our offices were much more prone to late nights and dinners at your desk (B2’s old firm had a table devoted to Seamless drop-offs in the lobby!)  Here, the days — even the busy ones — start earlier but they end earlier, too, and we’ve been delighted with this new life where any work left in the evenings can be done at home, and we can have dinner at home with sunshine streaming in through the windows.  Still, cooking more often and cooking on weeknights means meals like this mentaiko spaghetti, that are simultaneously easy and quick but exciting and not too repetitive, have become favorites of ours. 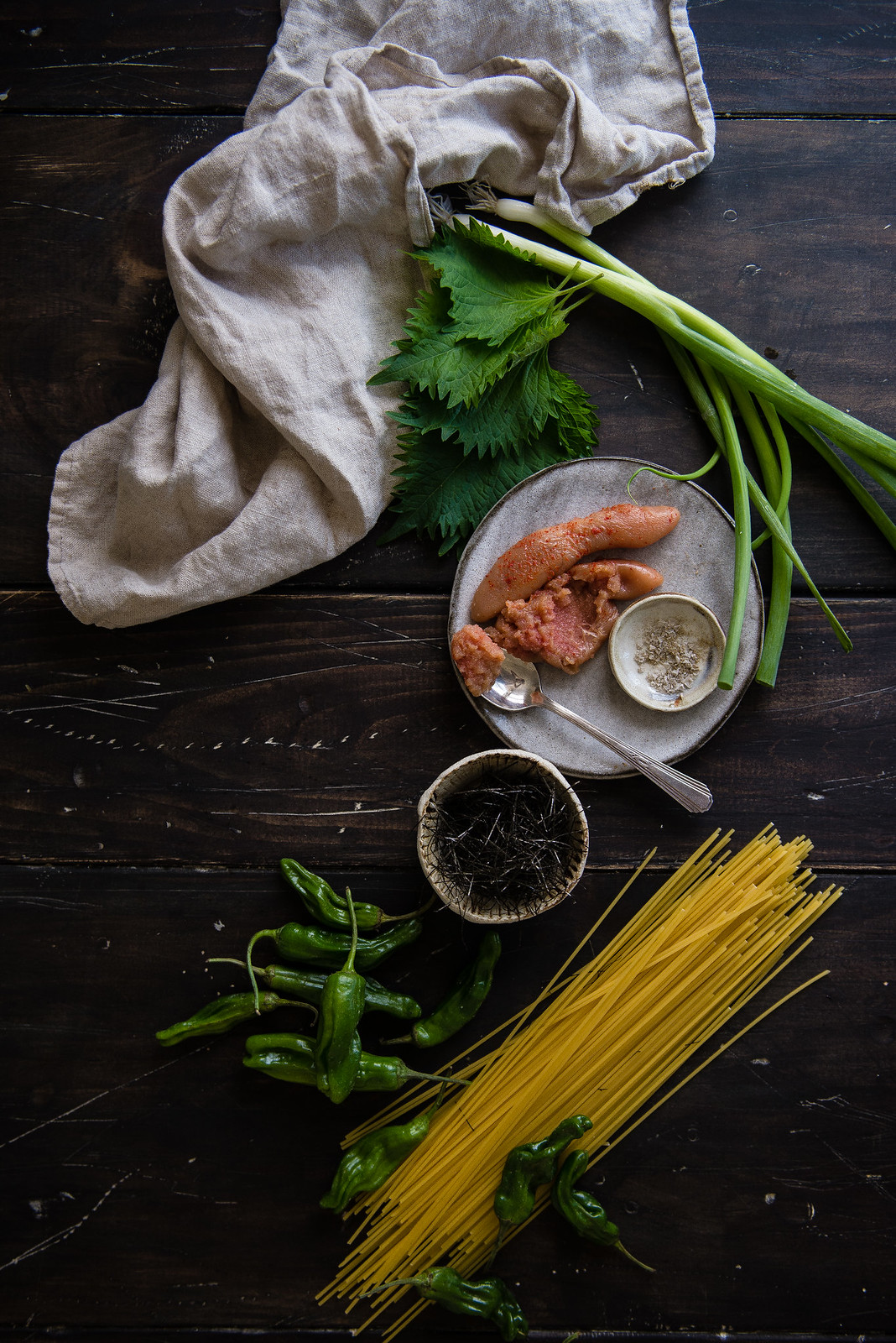 I first had pollack roe when B2’s mom introduced me to myeongran jeot, mixed into warm rice and scooped up with sheets of sesame-toasted nori. This first venture into fish eggs outside of the smattering of tobiko on sushi rolls was magical to me — just a few tablespoons turns a whole bowl of rice salty and comfortingly flavorful, with a vague taste of the sea from both the roe and the nori. When we sat down last year at a Japanese-Italian restaurant in Tokyo on Stephanie’s recommendation and I spotted mentaiko, or myeongran jeot’s Japanese counterpart, in spaghetti, it was love even before I’d had my first bite.

For a meal that feels so unique, mentaiko spaghetti is actually beautifully simple to make at home — it’s nothing more than piping hot pasta, tossed quickly with salty, gently spicy mentaiko and a generous helping of good butter until each spaghetti strand is coated brightly in butter and roe.  Then it’s loosened with just a bit with starchy pasta water, or, if you like, a bit of cream and milk, and topped with finely minced shiso leaves.  I had been tempted to discount the shiso, but its lively pepperiness, almost like basil, is what really brings the dish all together.  Provided you can find a little package of mentaiko and a few shiso leaves at a Japanese grocery store on the way home, the time it takes to cook the spaghetti is all you need before it’s time to eat.

There’s a nearly spot-on Italian equivalent in bottarga pasta, but mentaiko spaghetti somehow reminds me of a briny, sea-breezy version of cacio e pepe, with fish roe providing the umami punch in place of Parmesan, and with shiso as a fresh stand-in for pepper. Granted, I think it’s best suited for someone who loves seafood, or anchovies on their pizzas (and B2, who doesn’t like either, is probably much more excited for our taco salad nights).  If you do, though, there’s nothing better for a weeknight meal. 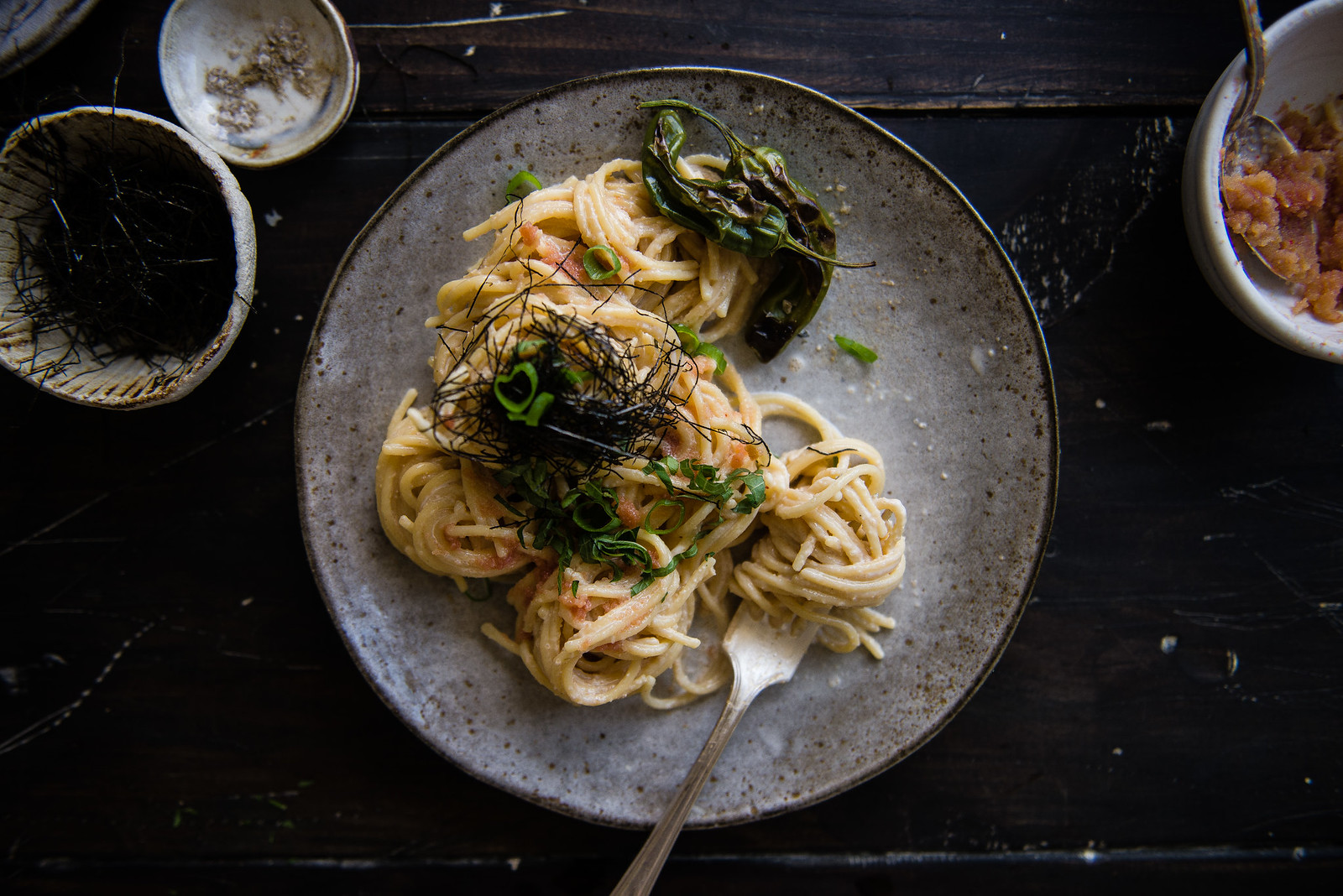 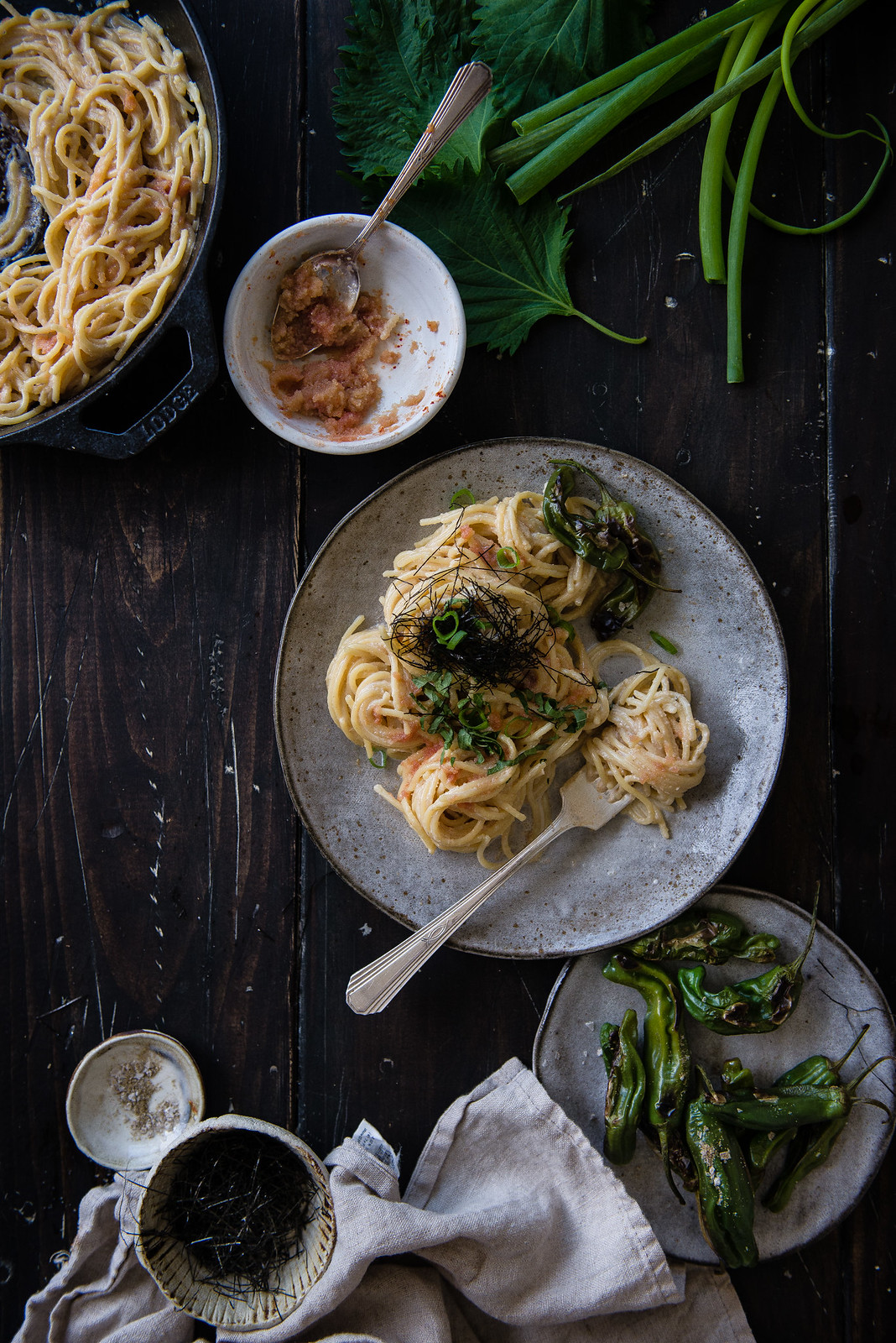 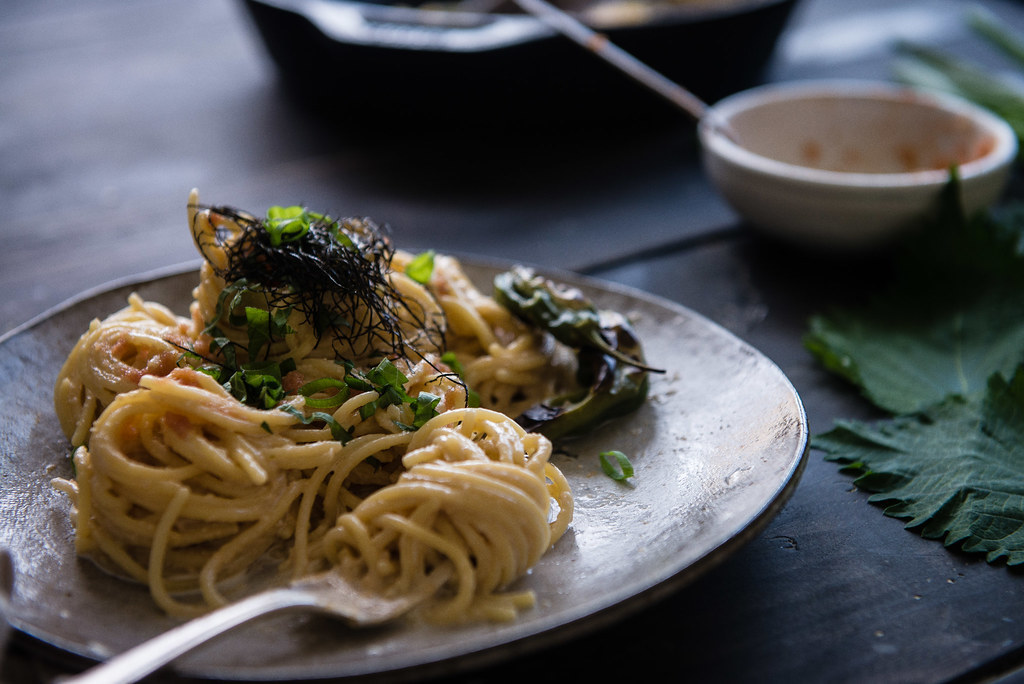 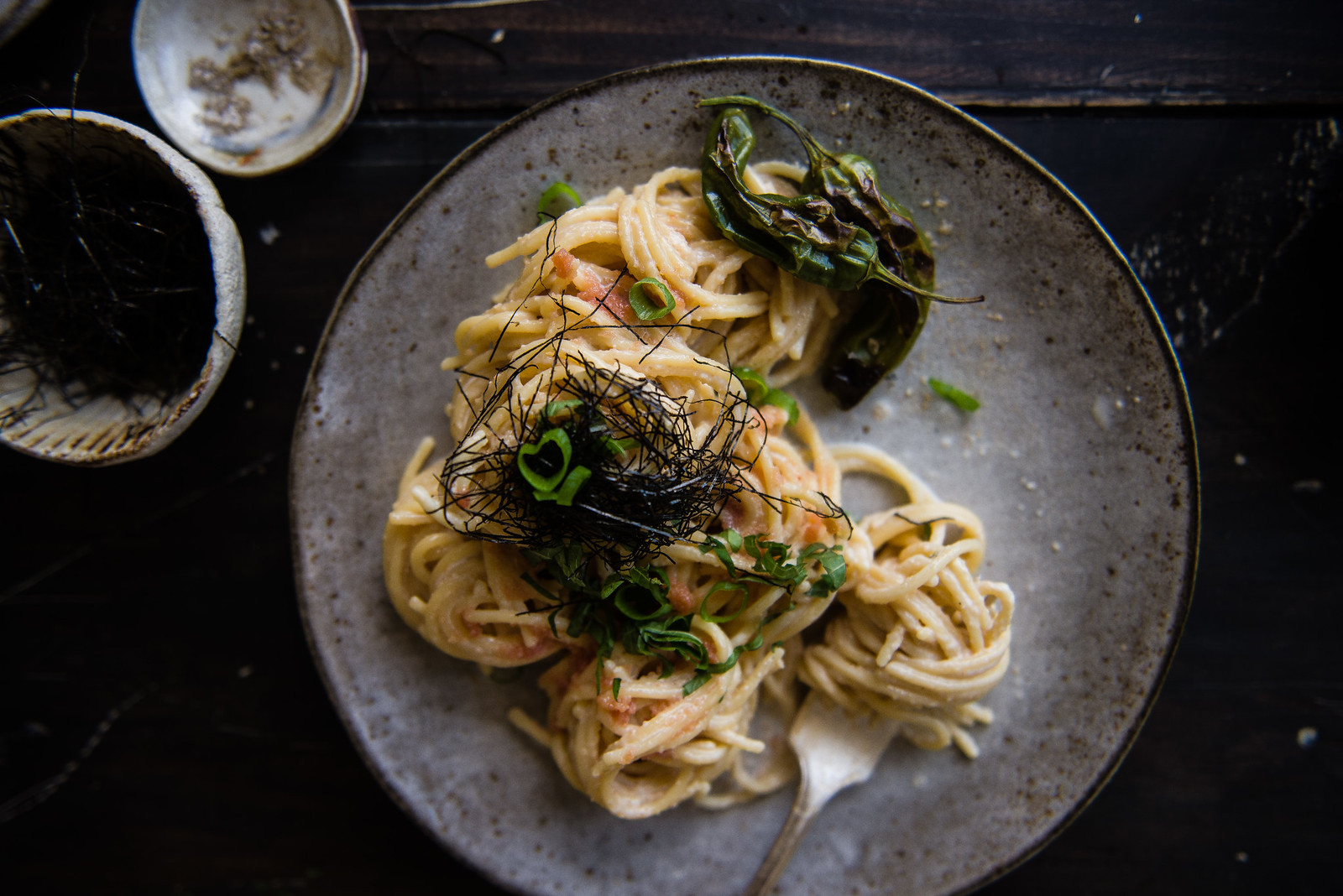 Based on various sources.

If you have access to a Korean supermarket but not a Japanese one, myeongran jeot (often labeled pollack roe) will provide a close substitute, as will perilla leaves for the shiso. Both Korean and Japanese pollack roe can get pricy, but you only need a small amount for the pasta — I picked up a 2 oz package for around $3.

If you want a creamier, more alfredo-like pasta, use 2 tbsp cream and 2 tbsp milk to thin the pasta after adding the roe and butter. You may still want to thin it with a bit of pasta water, as necessary.

Lastly, I served this with some blistered shishitos — all I did for them was heat a cast-iron skillet over high heat, add the shishitos and let them cook until charred, then toss them with a bit of olive oil and coarse salt.