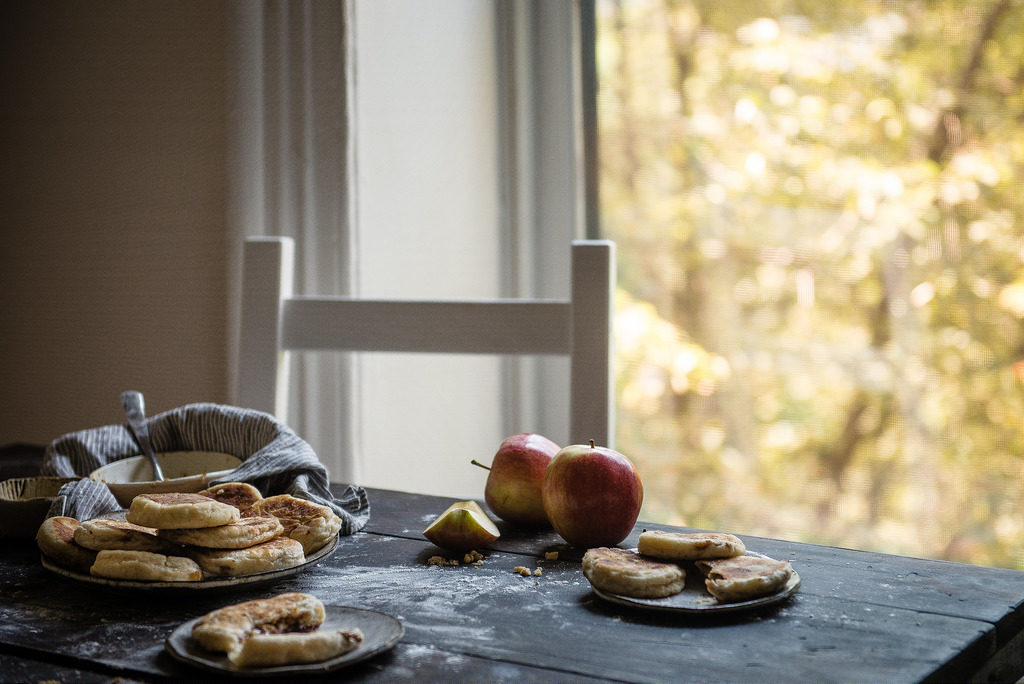 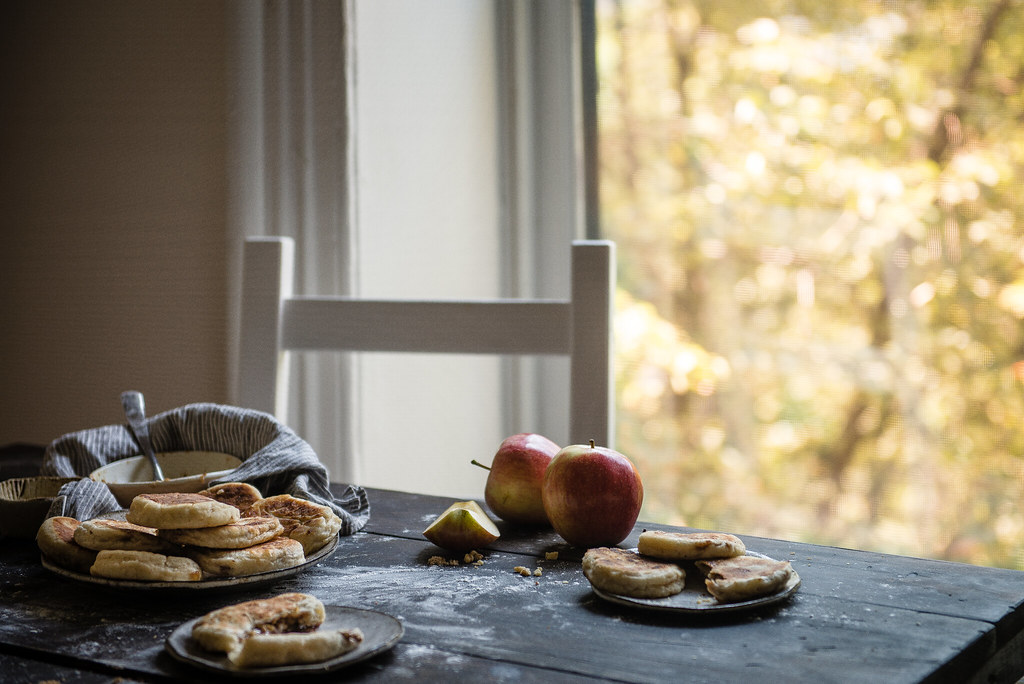 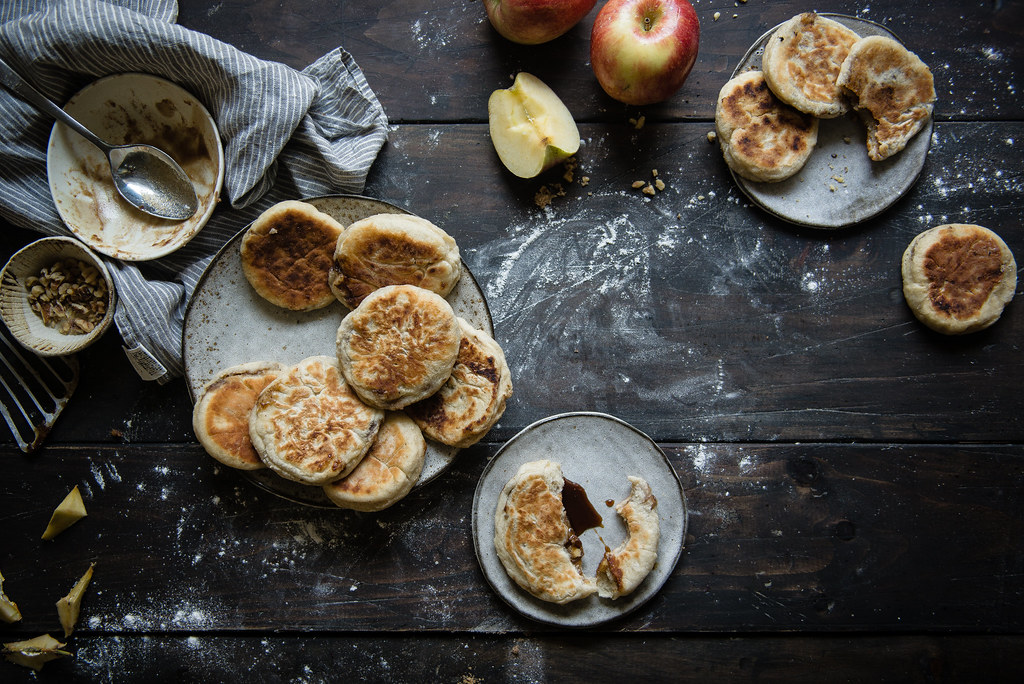 We’re scheduled to fly back to Hawaii in a little less than a month, and an email has already landed in our inboxes from my adorable mother-in-law, asking whether we want galbi or spicy ahi poke when we land. (It actually came through like, two weeks ago.)  B2’s mom is my favorite for all kinds of reasons, but I love this about her — every time we go home it’s a parade of food she thinks we might want to eat.  Plates of fruit appear when we’re not looking, trays of kimbap emerge from a trip to the Korean supermarket, little rows of pastel dduk are lined up meticulously in case we want to nibble on something.  On top of that, since I’m neither Korean nor from Hawaii, B2’s mom has made it her personal mission to introduce foods to me that I might not have had before, bringing home everything from fish jeon to Leonard’s malasadas in the name of my food education.  (She also has the cutest tiny cocktail forks that she puts out with everything.  So pretty much she embodies all my mom goals.)

A few winters back I came into the kitchen on a cool, rainy evening to find B2’s mom pan-frying a plate of hotteok for me to try.  If you’ve never had them, hotteok are a kind of Korean stuffed pancake, made from a soft, sticky yeast dough tucked up nice and plump around a brown sugar, cinnamon, and nut filling.  The little dough balls are pan-fried, then flipped and squashed with a funny little press (you can just use a regular old spatula, of course) while the brown sugar filling melts into a thick syrup inside. One more flip, and the result is a chewy, gooey pancake filled with all those perfectly belly-warming, fall-and-winter flavors.  I gobbled them down at the counter while they were still in that precarious temperature zone that hovers between worth it and I just burnt the &^*! out of my tongue, under the bright light of the kitchen with a cool Honolulu night twinkling outside the windows, and even though it wasn’t the first time I’d had them (shhhh), that cozy memory is what sticks out in my mind when I think of hotteok.

You can buy little kits to make these or buy them pre-made at most Korean supermarkets (or you could go to Korea for the real deal from a street vendor!) but a from-scratch version of hotteok is totally doable, even for a yeast recipe.  I think I’ve found it one of the easiest yeast recipes to make, actually — it’s a particularly wet, sticky, billowy dough, but it’s more or less no-knead, you can just throw it in the fridge to rise overnight, and with plenty of flour on your hands and the counter, it behaves itself just fine.  In my continued mission to make pie-like things without actually making pie, I gave these particular hotteok a little bit of twist with an apple pie filling.  I’m sure it’s been done before in plenty of places, but all you need is a bit of lemon juice and, of course, apples, and what you get is a perfectly portable East-West apple pie, with less butter but all of the autumn-filled love — warmly-spiced apples cradled by a molten brown sugar filling, tucked into soft, gently fried, crisp yet chewy dough.  The slight crunch and tart brightness from the apples livens up the filling just a bit, meaning (in my personal opinion) that you can eat even more than you normally would.

To me, these hotteok epitomize comfort, and I like that — I think, after all that’s happening lately, this week calls for a little extra comfort.  I hope you and your loved ones are all safe and sound, wherever you are. 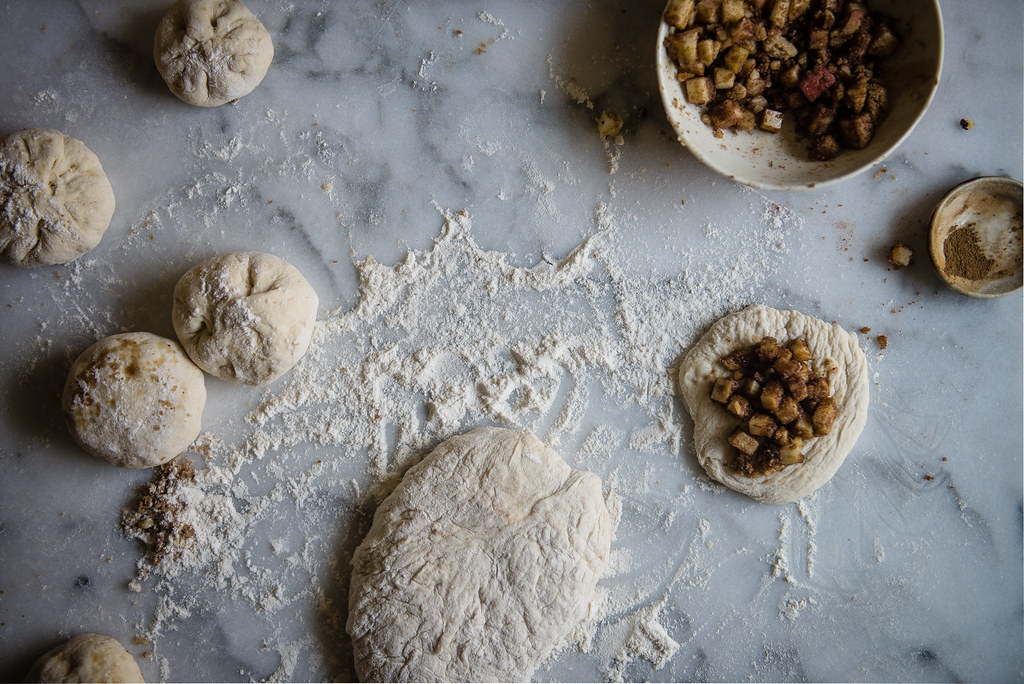 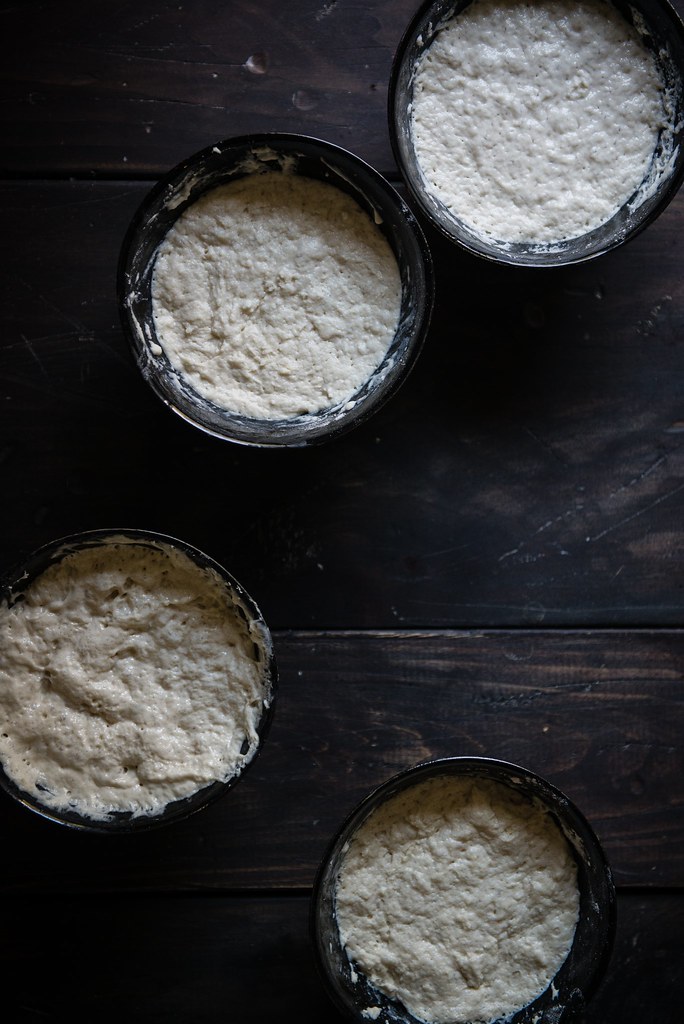 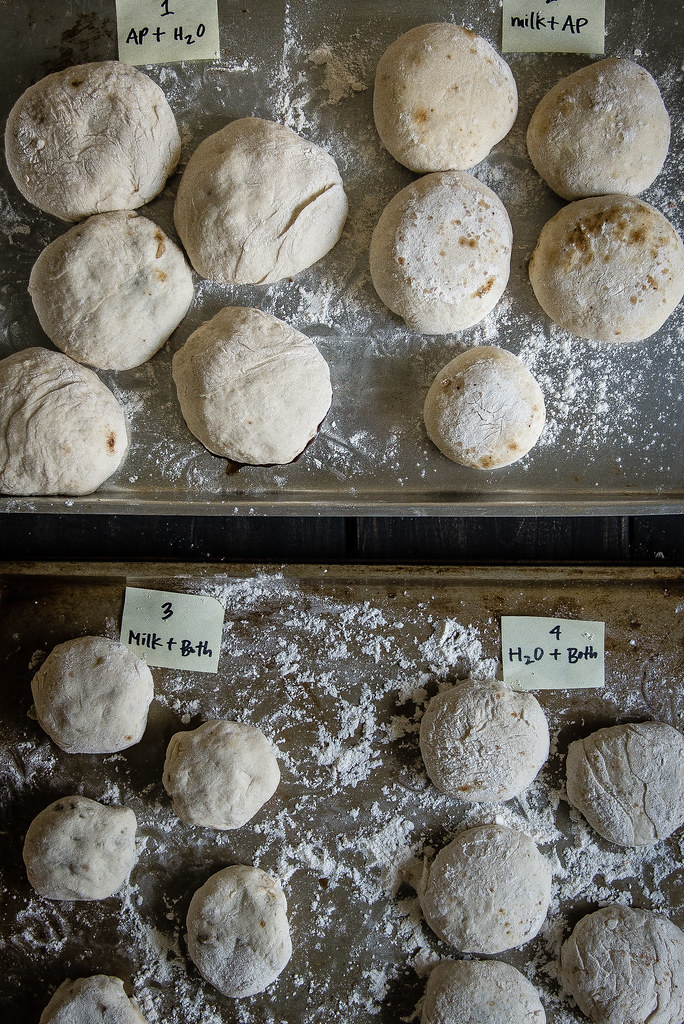 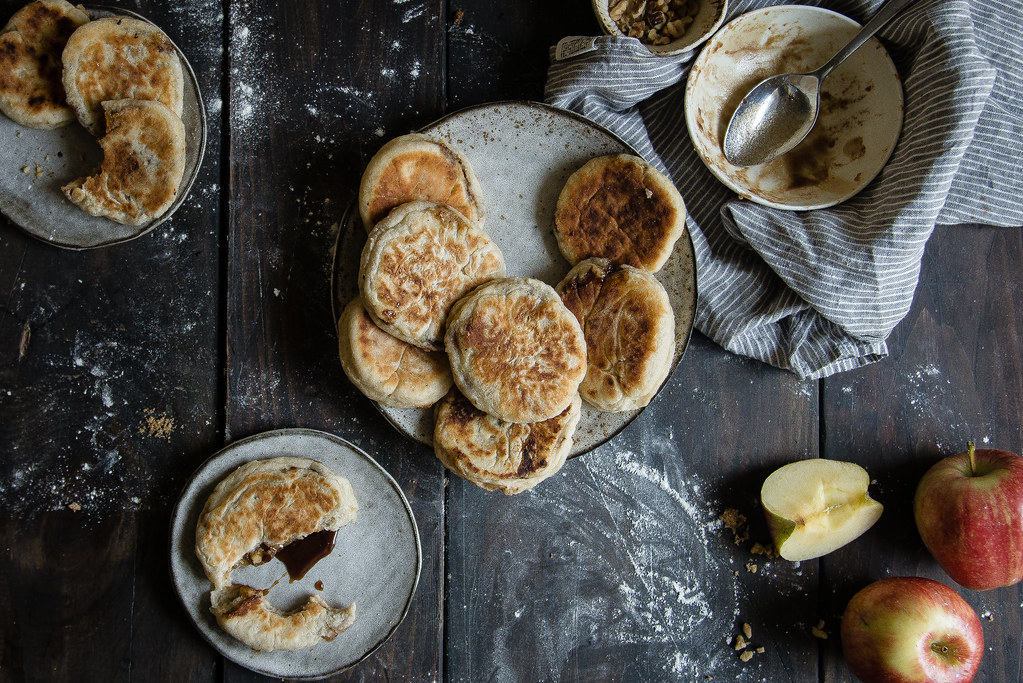 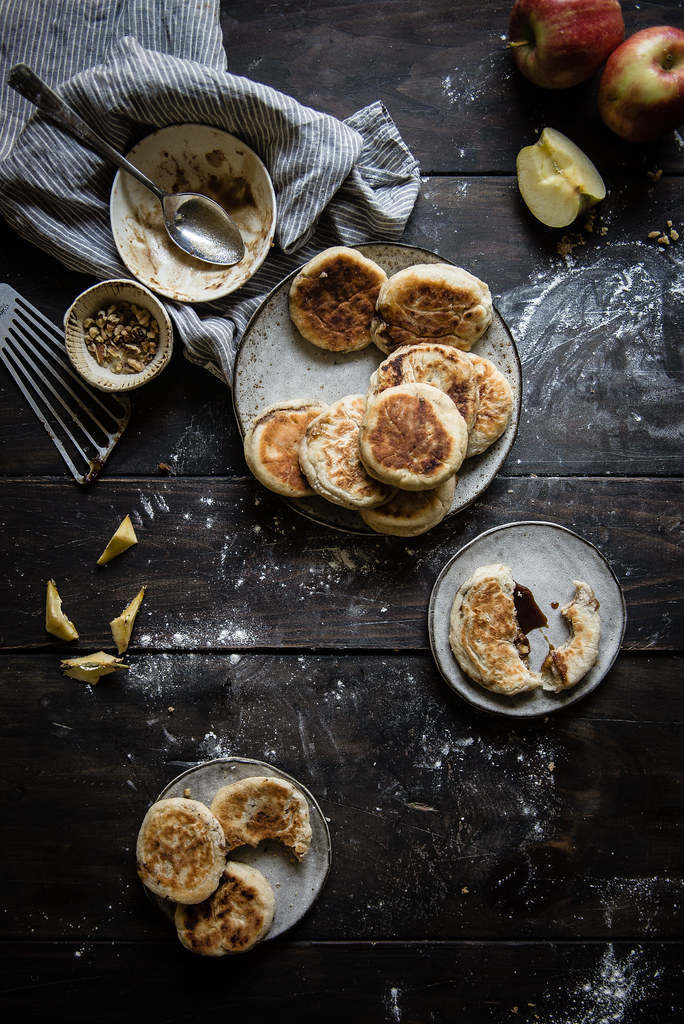 For regular hotteok, omit the apples and lemon juice, and increase the nuts (if you like) by a few more tablespoons.

Many recipes I came across called for one part sweet rice (mochiko) flour to create a chewier, crispier hotteok; many others also called for milk. I actually found a plain AP flour and water version was nice and crisp on the outside but pleasantly chewy inside, without the slightly gummy, dense kind of chewy you get from mochi, and I liked that best. If you love mochi, though, you might find you prefer the sweet rice flour version — in that case, substitute half the all-purpose flour by weight for mochiko flour, and use 1 cup all-purpose flour and about 3/4 cup mochiko flour instead of 2 cups all-purpose.

On the use of milk, I was also surprised to find that I preferred the water version over milk, since I’ve really liked milk in the past for its ability to create a more tender crumb. Maybe it’s the fact that you want these to have a little bit of a chewy pull, but I found that the version with water was both softer and more pliable, with a satisfying chew.

Finally, I left the apples uncooked before frying but diced them fairly small, so that they were partially cooked when the hotteok were done. I liked that it left a bit of crunch, but if you’d like softer apples, I’d recommend sauteing the diced apples for a minute or two in just a bit of oil, letting it cool briefly, then mixing it with the brown sugar, cinnamon, and nuts.