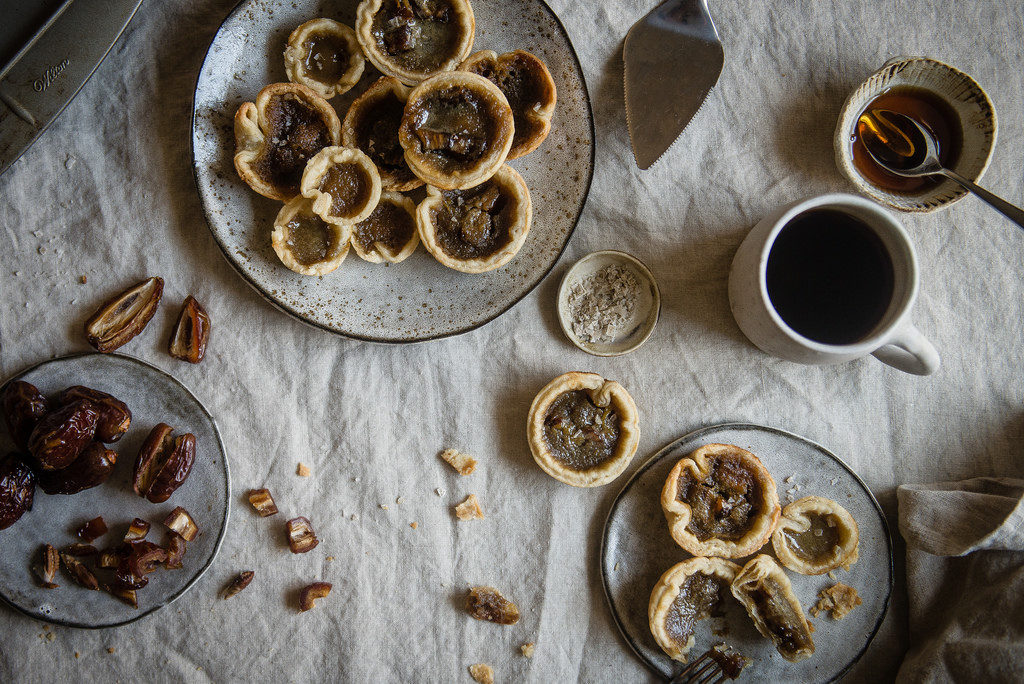 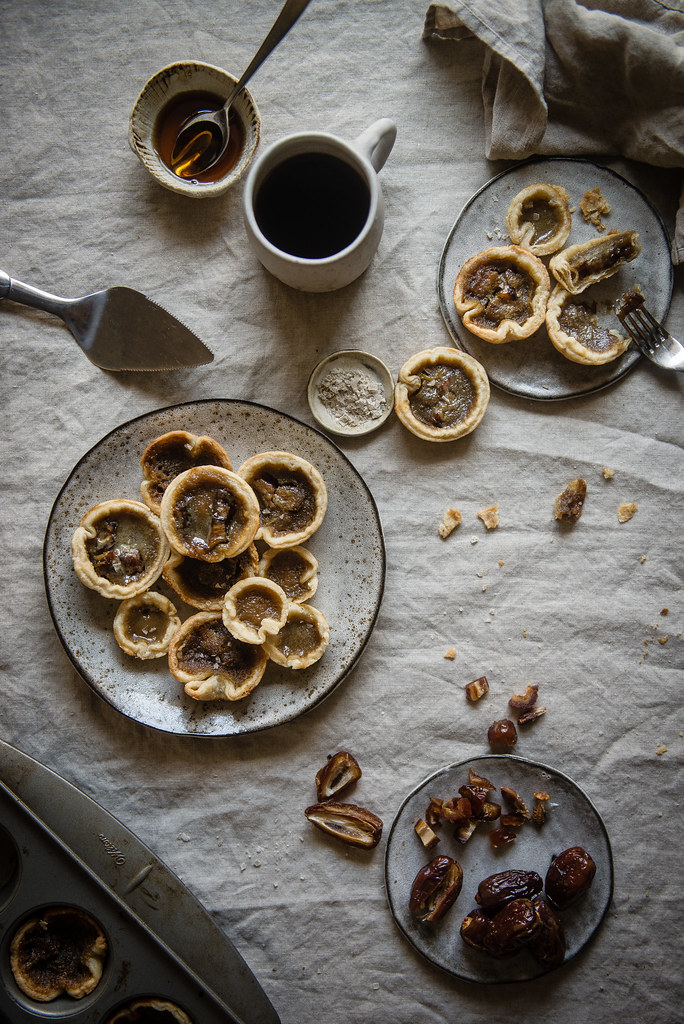 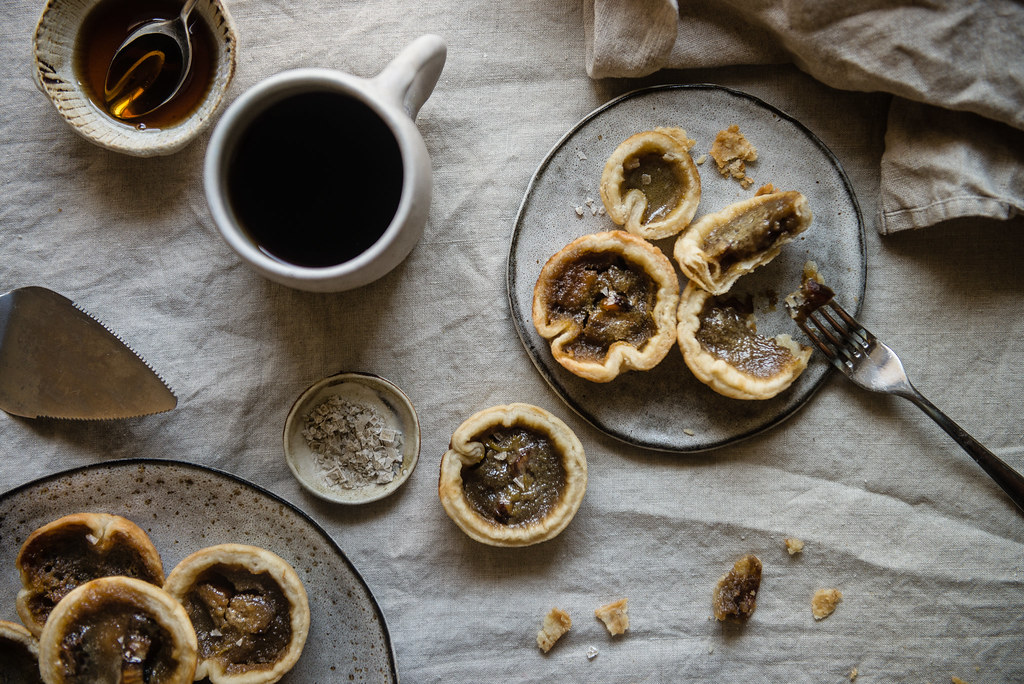 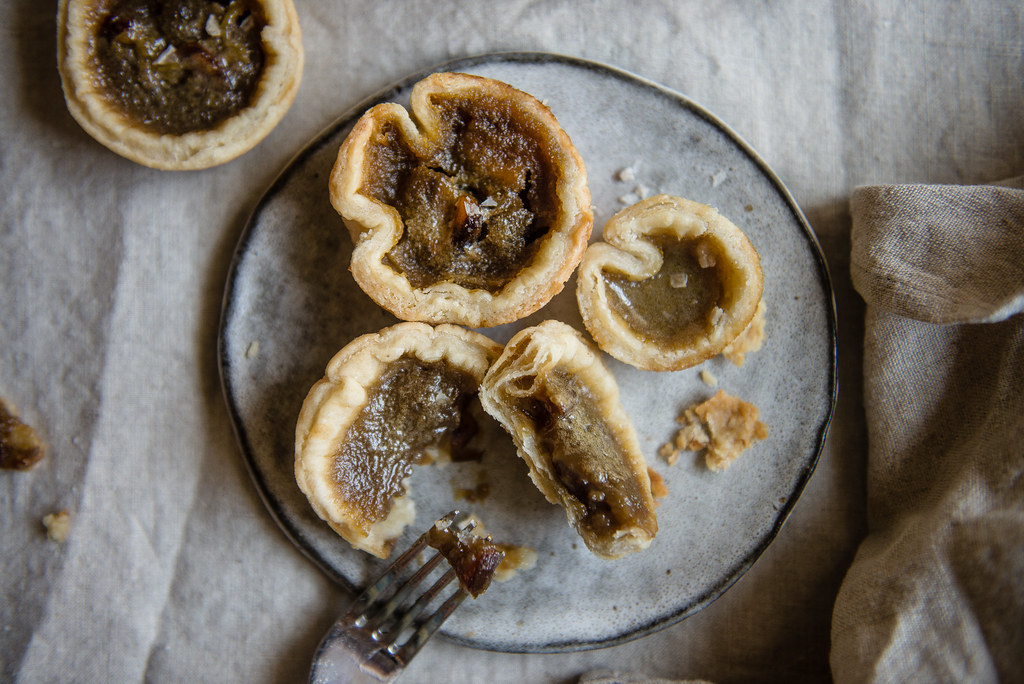 So I think I’m about five years late to this party.  But I am newly, and really, obsessed with dates. They are so good. How are they so good? I don’t know how I was so woefully misinformed, but up until a couple months ago I had this idea that dates were just a vague something to be nibbled on at your grandmother’s house if all the cookies were gone, or maybe used as a convenient vehicle for goat cheese and bacon, or admired from afar as a healthful “substitute-for” things I am generally reluctant to substitute. And then I was gifted a box of really great ones, with fancy things like orange peel and almonds tucked inside, and my world was totally rocked. This is probably news only to me at this point, but it turns out dates are pretty much candy. They have a consistency like caramel and nearly the same buttery taste; they’re sticky and soft and reminiscent of wonderful things like honey, cinnamon and molasses.  B2 was unmoved by my date revolution (although he hasn’t gotten tired of responding to “Want a date?” with “I thought we were already married. Get it?”) but, with or without him, I’m fairly sure I’ve eaten my weight in them since April.

Because their distinct warmth seems perfectly suited for cold weather (well, of course, sticky toffee pudding), I’ve been waiting for holiday season to roll around so that I can tuck dates into every cozy-weather dessert I can think of.  And the first (of many) is these butter tarts!  Butter tarts are a Canadian beauty I’ve been meaning to try ever since I noticed they were kind of like a pecan-less sister to pecan pie. (Because I’m the wicked stepsister who likes eating all the pie filling from underneath the pecans and leaving the nuts. I mean, what?)  Gooey and molten with a brown sugar and, here, maple syrup filling, I couldn’t imagine anything more perfect to introduce to honey-sweet, toffee-like dates.  Lo and behold, their mellow, dulcet flavor and chewy texture fit right in, and the filling was every pecan-less pecan pie dream I’ve ever had fulfilled.

For an extra touch of holiday decadence, the crust here incorporates a few tablespoons of Vermont Creamery crème fraîche.  After seeing sour cream pie crusts here and there, I wondered whether crème fraîche might work the same way in producing a crust that’s a bit easier to roll out but just as tender and flaky, and it turns out that was exactly the case!  I love crème fraîche the more I cook with it, for its ability to step in for both sour cream and heavy cream in so many applications — it’s rich, so not for every day cooking, but every once in awhile, it’s perfect to make food feel a little festive.  I’ll be pairing up with Vermont Creamery again next week to use it a savory recipe, too! 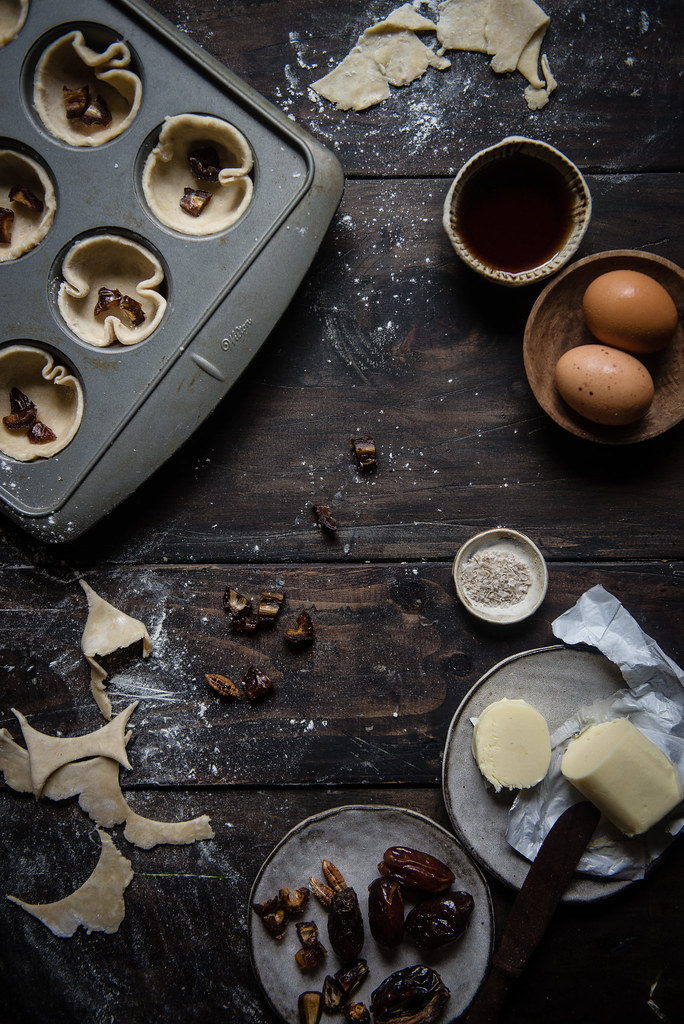 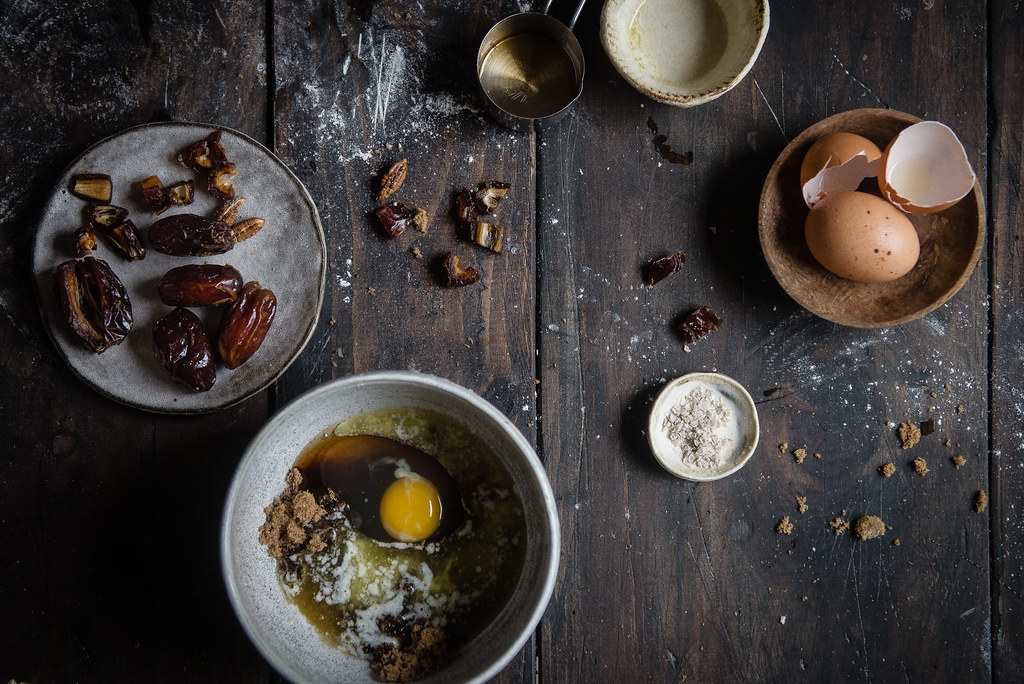 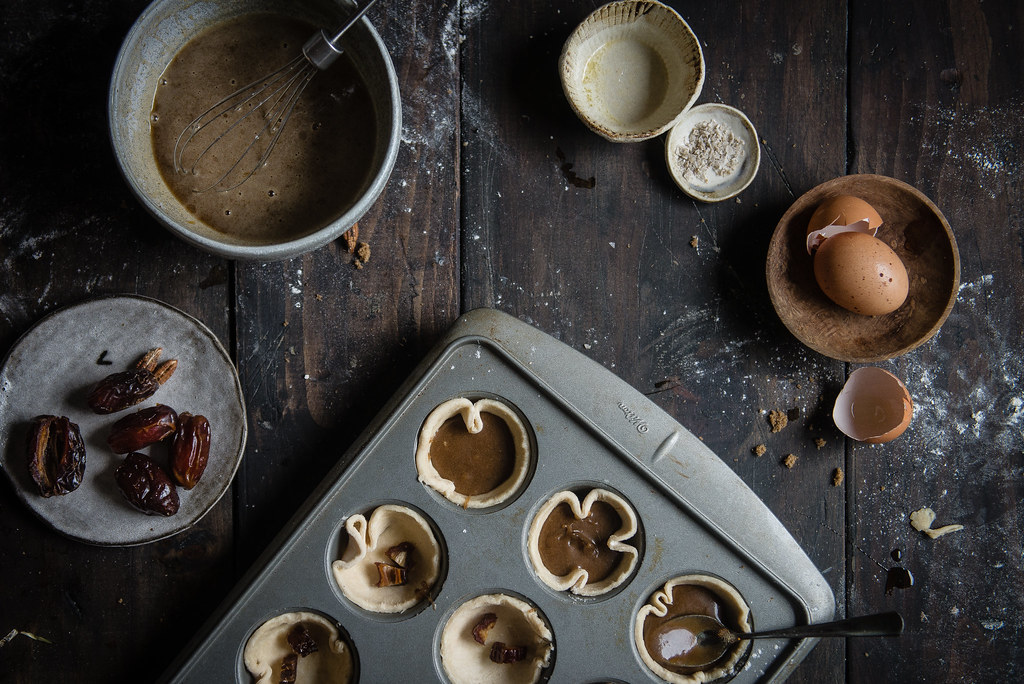 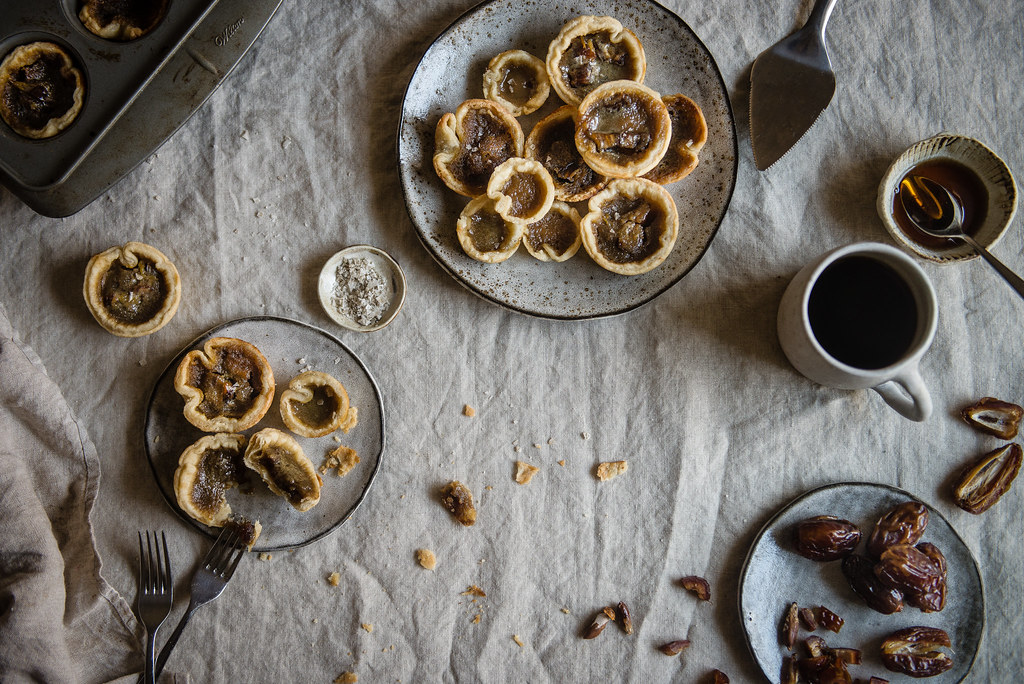 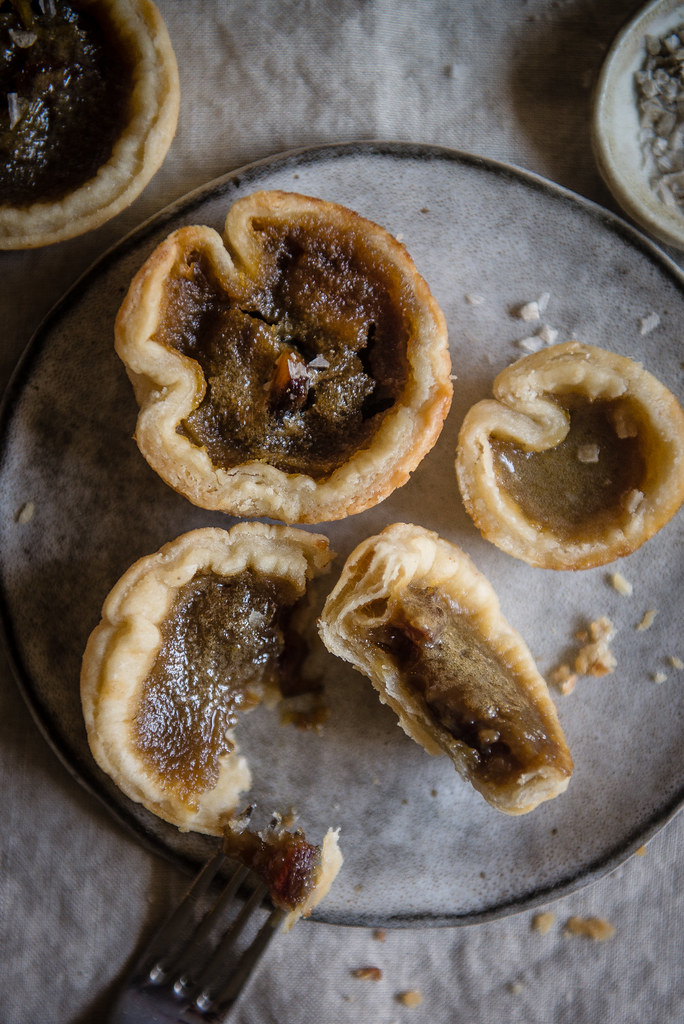 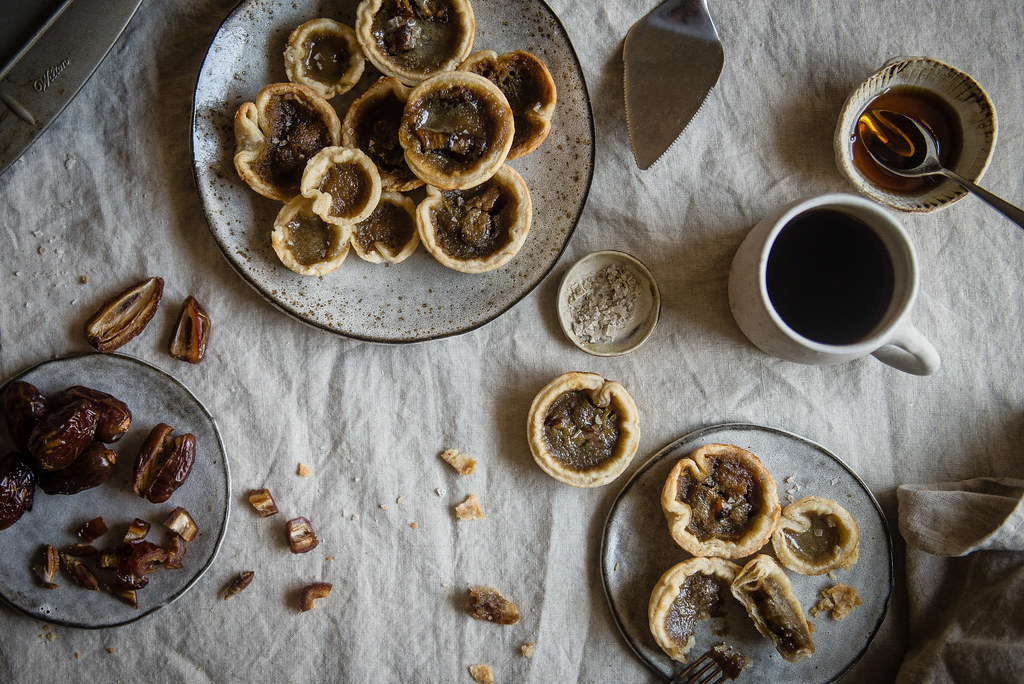 Thank you to Vermont Creamery for sponsoring this post!  All opinions are, as usual, my own.

In these tarts, chopped Medjool dates, my favorite for their soft, plump texture and sweetness, take the place of the raisins that occasionally make their way into butter tarts. I hear that whether to include raisins in traditional butter tarts can be a source of deep ideological divide, so for those on the no-raisin side, dates might not be much of an improvement. In which case, feel free to omit! Recipe inspired by Crepes of Wrath and Canadian Living.

These are butter tarts that err on the side of less-gooey — if you like a runnier tart, increase the maple syrup to 6 tbsp and bake the tarts for less time, about 12-13 minutes.

In rolling out the pie crust, I find it easiest to roll the dough out between two pieces of parchment paper dusted with plenty of flour. Although that runs the slight risk of over-flouring, I think it outweighs the hassle of trying to scrape the dough off a surface when I haven’t floured enough. If you find it’s still sticking, though, just throw the whole thing in the freezer for 15 minutes, and the parchment should peel away more easily. (The freezer is my go-to whenever pie dough gets too stressful — just cool the dough down, and it should be easier to handle.)

Also, on dates! If you’re having trouble finding good ones, Nuts.com offers ridiculous quantities that are consistently delicious — I really love their Medjool and Khadrawi dates.