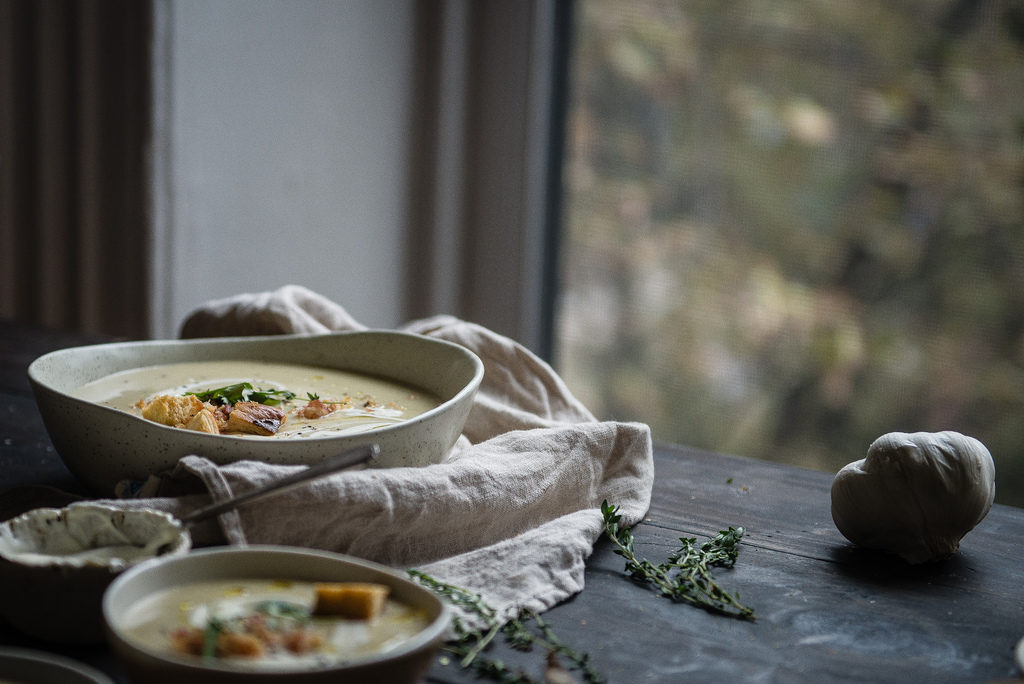 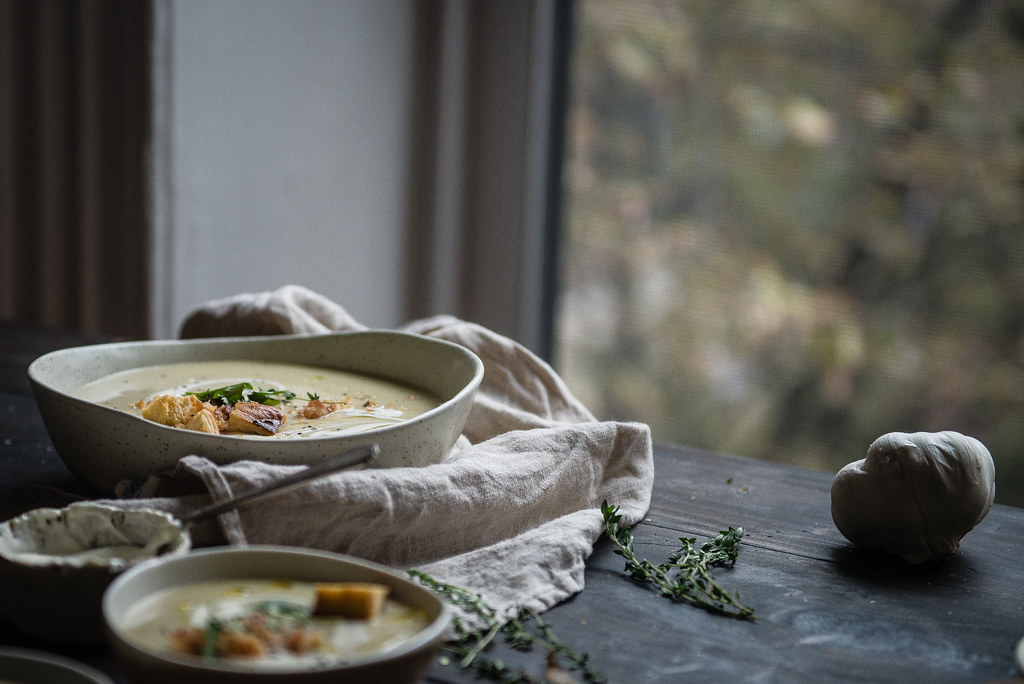 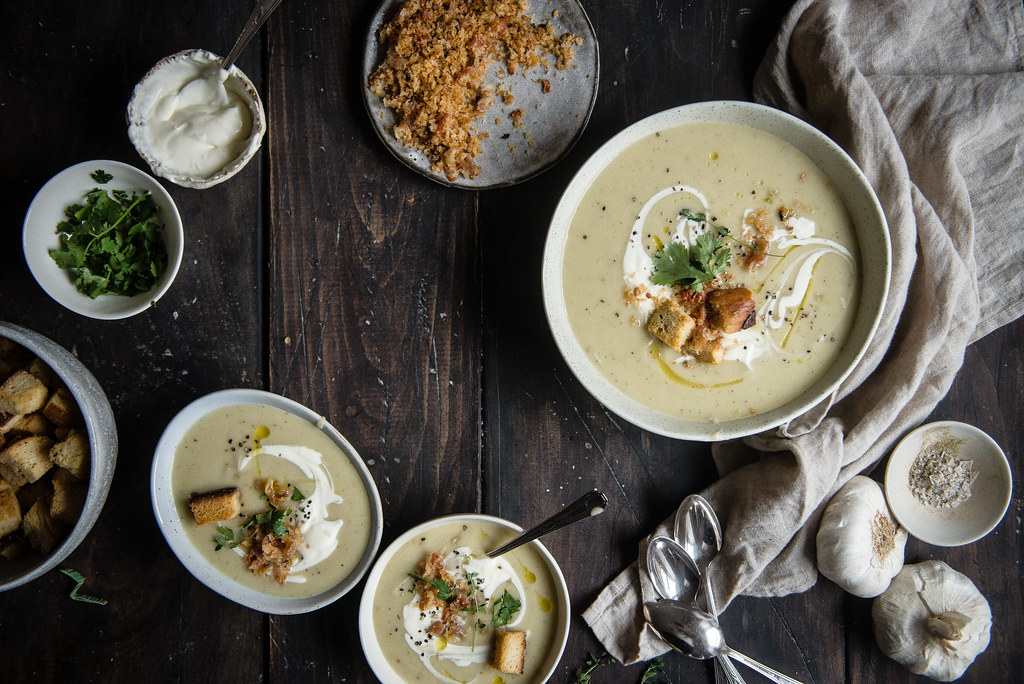 Every once in a blue moon, usually when we’re just about to fall asleep, B2 likes to come up with ideas for things I should cook next.  I use “ideas” loosely, because it’s mostly a sleepy, intentionally goofy dialogue that consists of “what about …” followed by a long pause and things like “… homemade hot pockets!” (to be fair, that would be delicious) or “something with cheese” or “pumpkin toast.”  (When I asked what pumpkin toast would be, like toasted pumpkin bread or toast with pumpkin on it or toasted pumpkin or what, his answer was, “You know.  Pumpkin.  Toast.  Pumpkin toast.”  And then he fell asleep.  Two weeks later, I showed him this and he said, with glee, “See?  It was a good idea!”)

Still!  Even though he’s usually trying to be silly, his ideas manifest into tasty meals more often than I think even he expects.  This potato soup came from something like “baked potato in soup form” or “sour cream and onion dip in potato form,” though neither of us (now that we’re awake) can remember which.  The way it turned out, it does seem kind of a dressed-up version of both — in addition to the obvious potato, there’s a honking big leek as the green onion, crème fraîche to amp up what would be sour cream, and crisped-up pancetta as bacon bits (but you could definitely use bacon instead, because there’s always room for bacon).  On top of that, there’s a whole head of roasted garlic thrown in, which is neither here nor there, but inspired by Elizabeth’s downright gorgeous garlic soup, because I’ve been meaning to try it pretty much ever since she posted it.

The result was so good.  B2 is a fan of anything potato and anything garlic, so I was fairly sure there was no way this could lose, especially with a Brooklyn Supper recipe as my guide, but seriously — I ate so much that I got a stomachache, and I’m not even a soup person, usually.  The soup is so satisfying and substantial; it has all the right notes of rich creaminess from the potato and crème fraîche, but that same crème fraîche adds a slight tang that’s amped up by the leek and brightened even more by the wine.  Thyme and savory chicken stock give it a warm umami-rich foundation, and then the pancetta breadcrumbs (and a couple of croutons made with this recipe, because I don’t know when to stop) were the perfect finish to add some crunch and texture.  The soup freezes well, and I was planning on storing away a whole bunch for lunches, but it was so good that by the end of the weekend all I had was one paltry serving.  Once the chill truly sets in (not that I’m complaining, but our fall has been uncommonly warm and muggy so far — we had mosquitoes last week!  In November!) I’m going to want this soup all the time.  Thanks, husband! 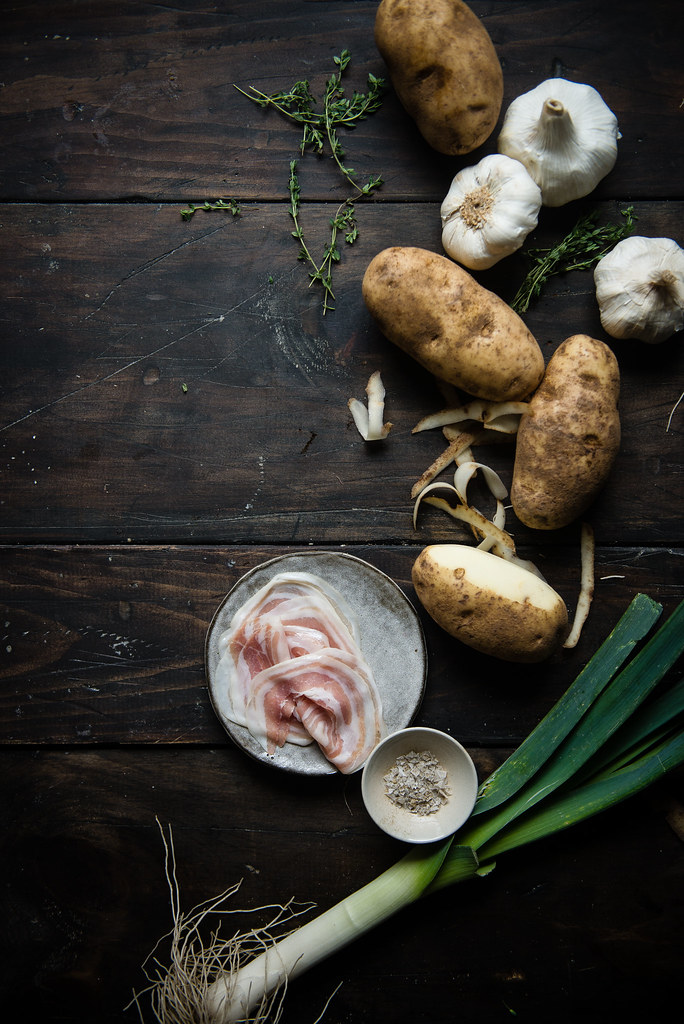 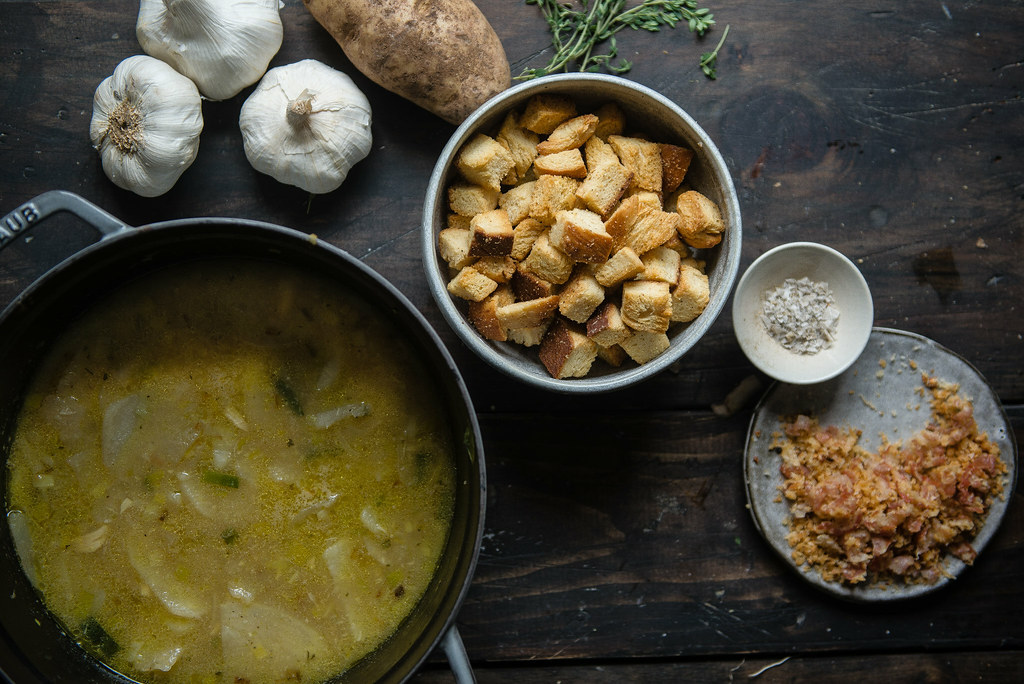 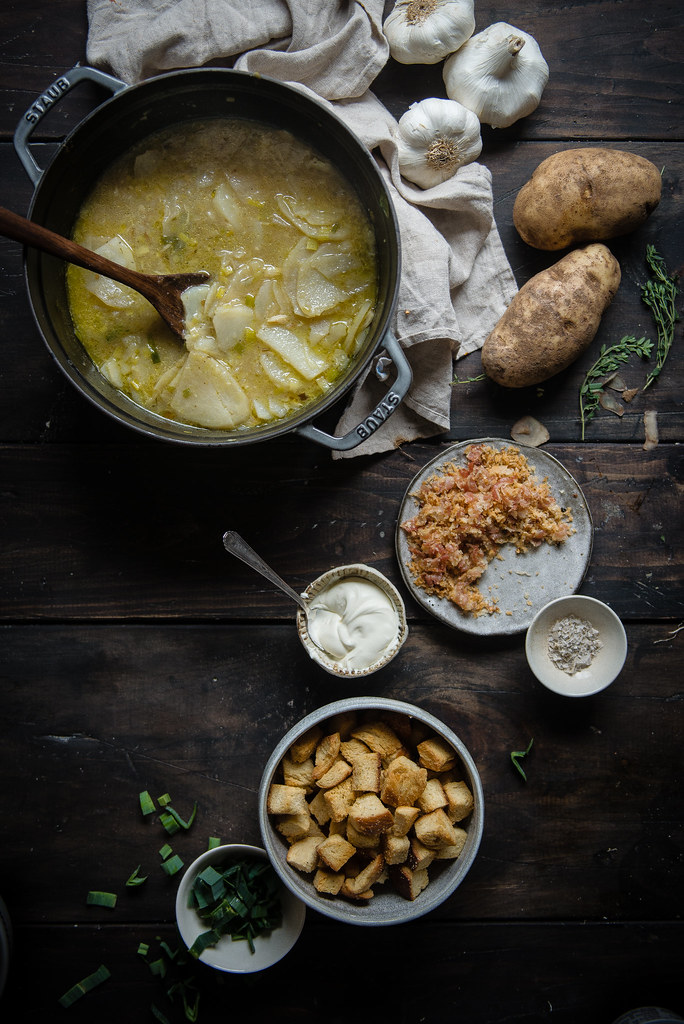 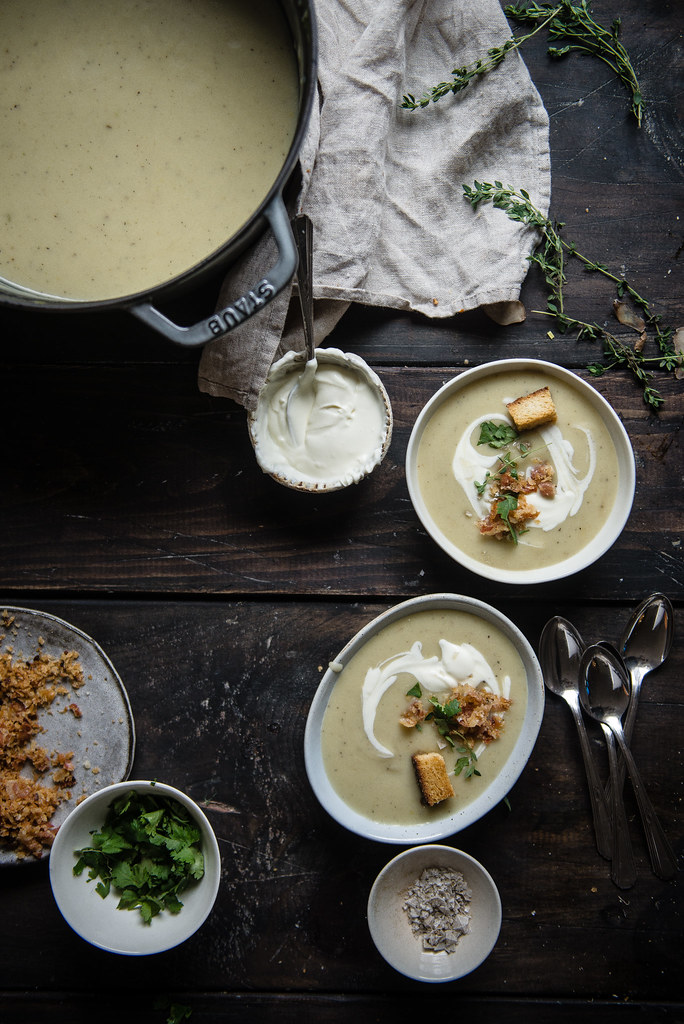 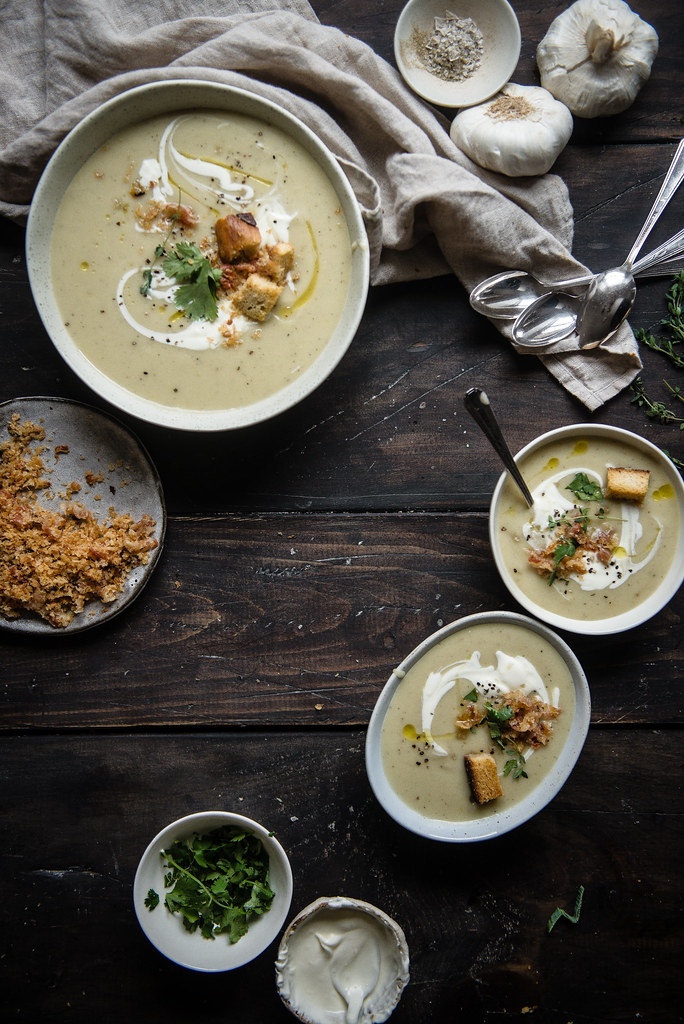 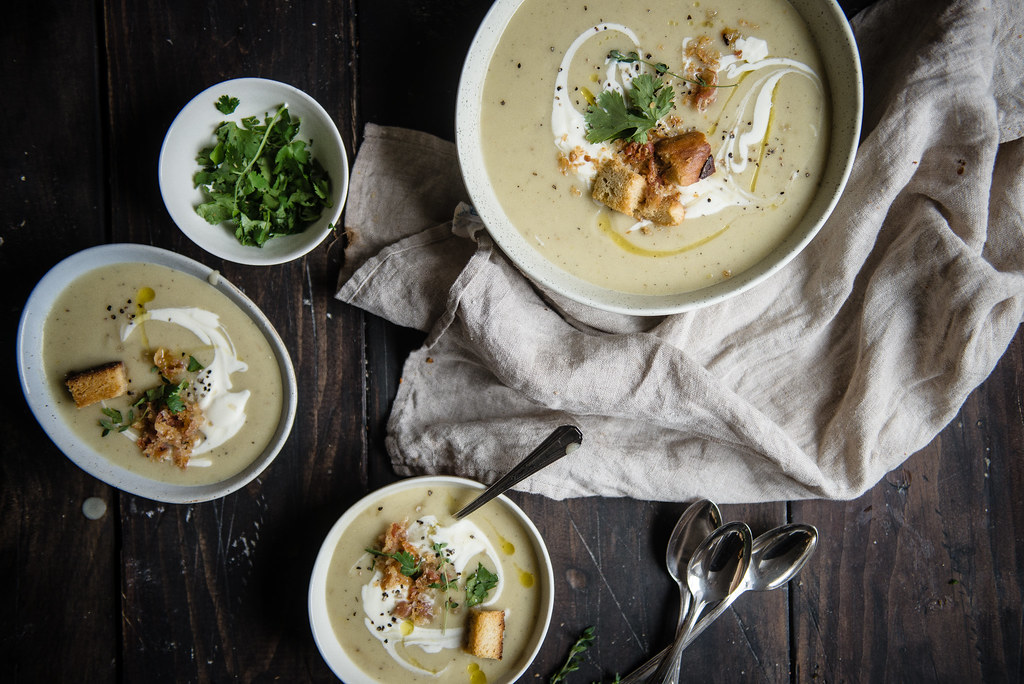 Like last week’s post, this post is sponsored by Vermont Creamery and uses their superlative crème fraîche!  As you might have guessed already, Vermont Creamery has been one of my long-time favorite brands, for their unwavering commitment to really, really good dairy — and, more simply, the fact that they are just great, kind people who love good cheese.  Their product and what they do is truly special, and if you happen by their products (Whole Foods and Murray’s Cheese are good places to look!) you won’t be disappointed.  Thank you for having me, Vermont Creamery!

Inspired by Brooklyn Supper. And B2!

A few notes on lighter substitutions: Greek yogurt would work wonderfully in place of some or all of the crème fraîche; you could also use cauliflower instead of potato!