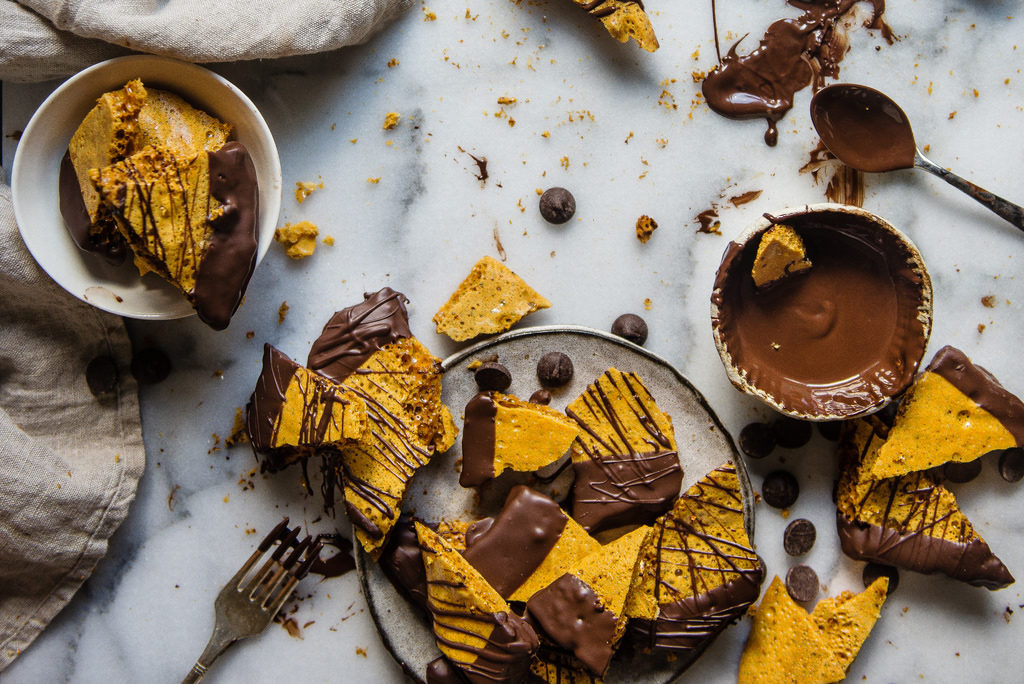 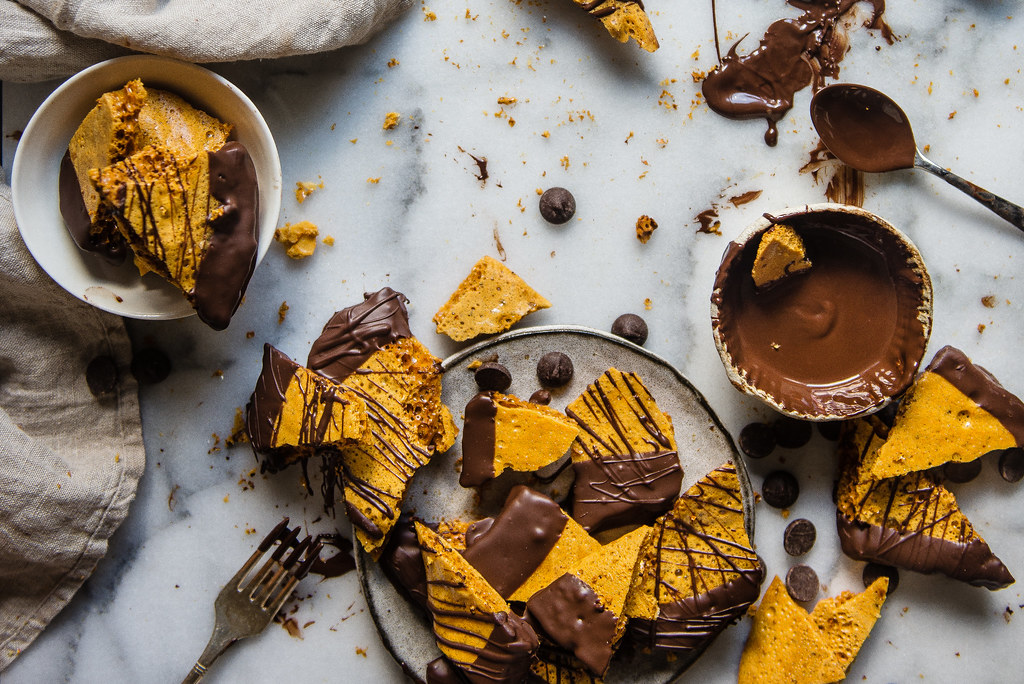 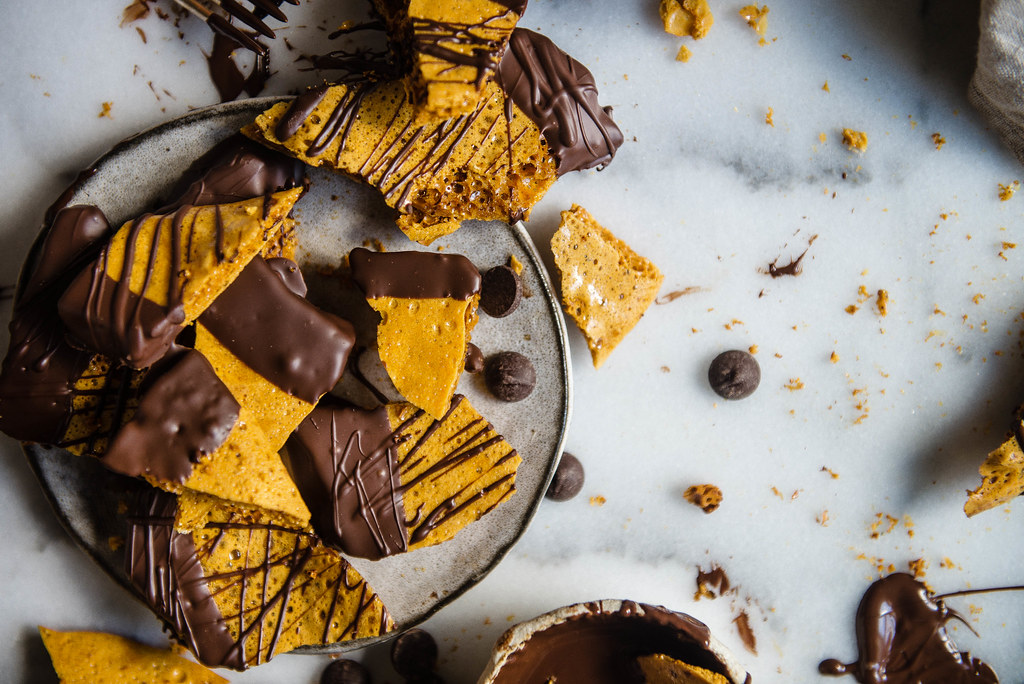 I can’t decide what I’m more excited about sharing this morning.  This honeycomb candy, feathery-crisp with a subtle heat, dunked gleefully into dark chocolate, and perfectly Halloween-color-schemed, or the book that it came from, The New Sugar & Spice. Both are playful, just the right amount of unconventional, and totally awesome, pretty much just like the lady behind them, and I couldn’t be more thrilled that they are both in my kitchen right now (except there’s not much left of the honeycomb, actually).

Sam has been an inspiration for me ever since I came across her blog a little over two years ago. Not only is everything she dreams up gorgeous and delicious, it’s thoughtful — just like her writing, which is by turns hilarious and poignant, and so vivid that you feel you’re right there experiencing it too, whether it’s about pantry struggles or Whole Foods cookie bars.  It’s that combination of thoughtfulness and verve that taught me rough puff pastry (mine was very rough) and pillowy focaccia, that perfectly encapsulates how to tell when you’re done kneading your bread, and makes me think I could maybe, someday, potentially temper chocolate.  The New Sugar & Spice is, predictably, full of everything I love about Love, Cake and more — a spunky effervescence that shines through in artful recipes and beautifully narrated stories.

So it’s only fitting that, just when I was just feeling uninspired for Halloween this year, her new book fell into my lap and with it, my first shot at this perfectly orange-and-black (well, dark brown) homemade honeycomb treat.  You boil sugar, syrup, and a few sundry extras together until feisty and darkly golden, throw baking soda in and watch it foam up like it’s alive, then pour it onto a baking sheet while, if you’re me, trying not to scream or drop it all on the floor.  And then it turns into candy!  Crunchy, airy, caramelized candy that tastes even better when coated in dark chocolate.  What makes Sam’s so wonderful is that she adds a smidge of cayenne to hers — and while I’m sometimes wary of spicy sweets, it couldn’t be more perfect here.  Not overbearing, but just the slightest touch of warmth that lingers after the candy melts, like an extra squeeze in a hug. Perfect for little ones, but still subtly special for not-so-littles.  Happiest of Halloweens to you, friends! 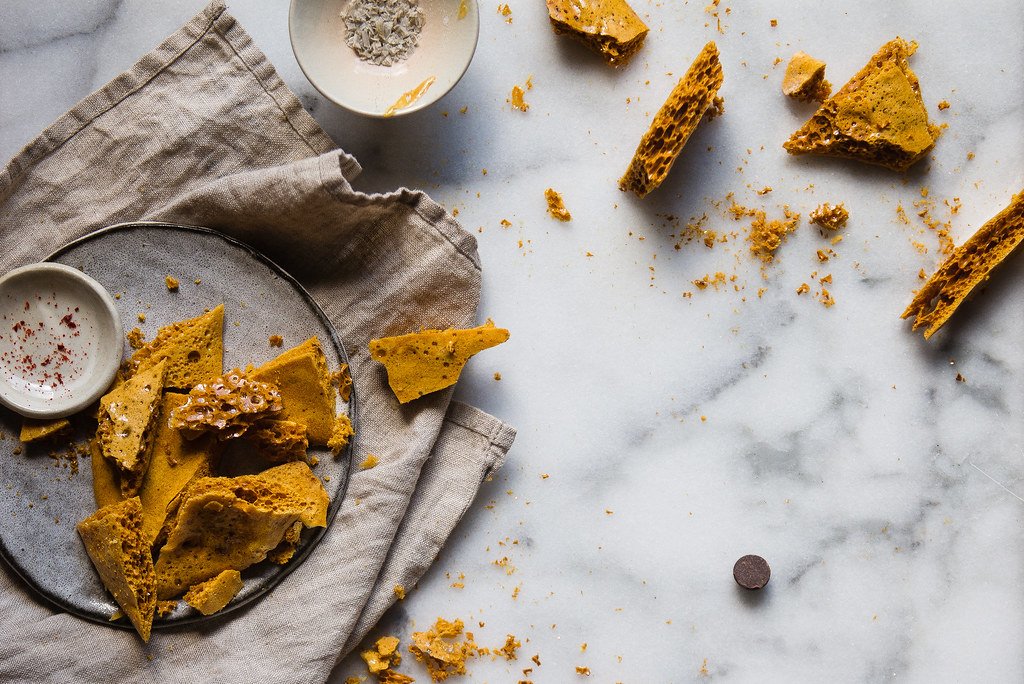 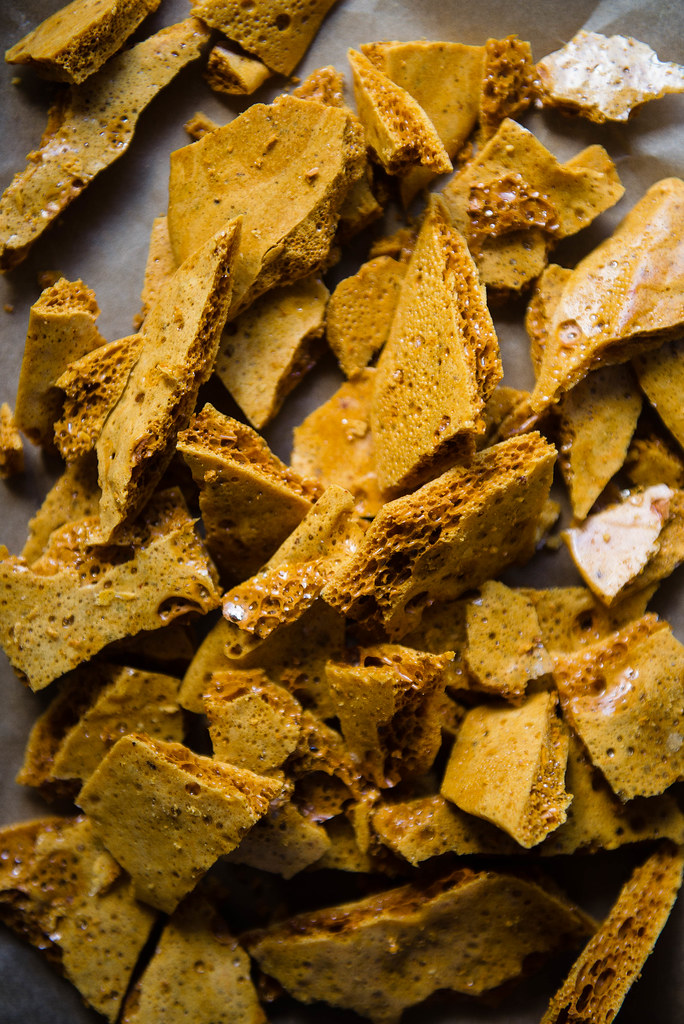 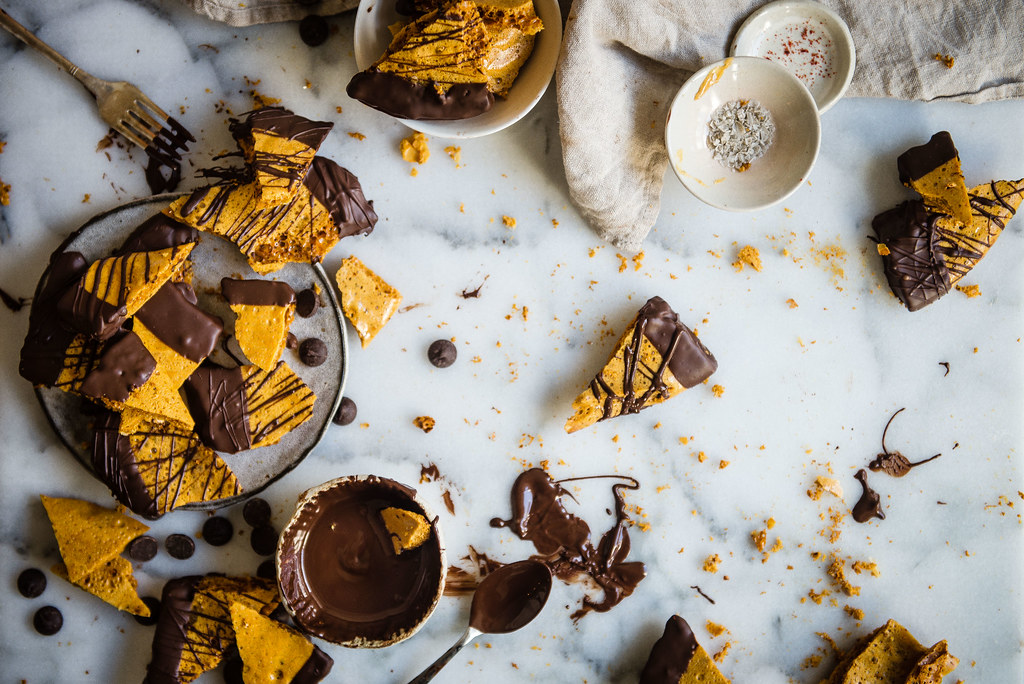 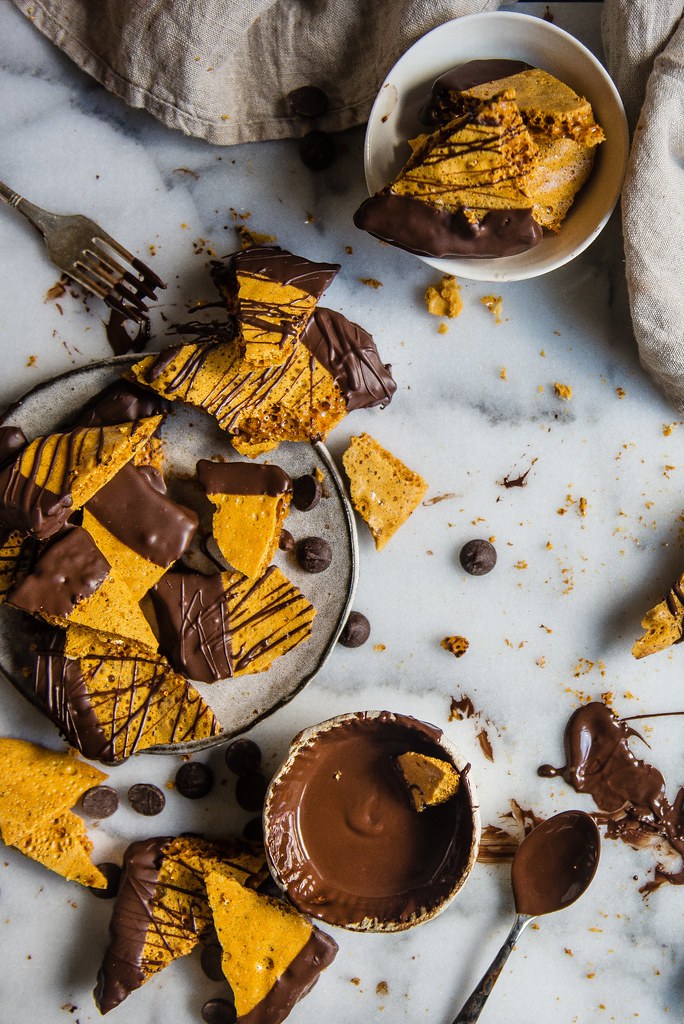 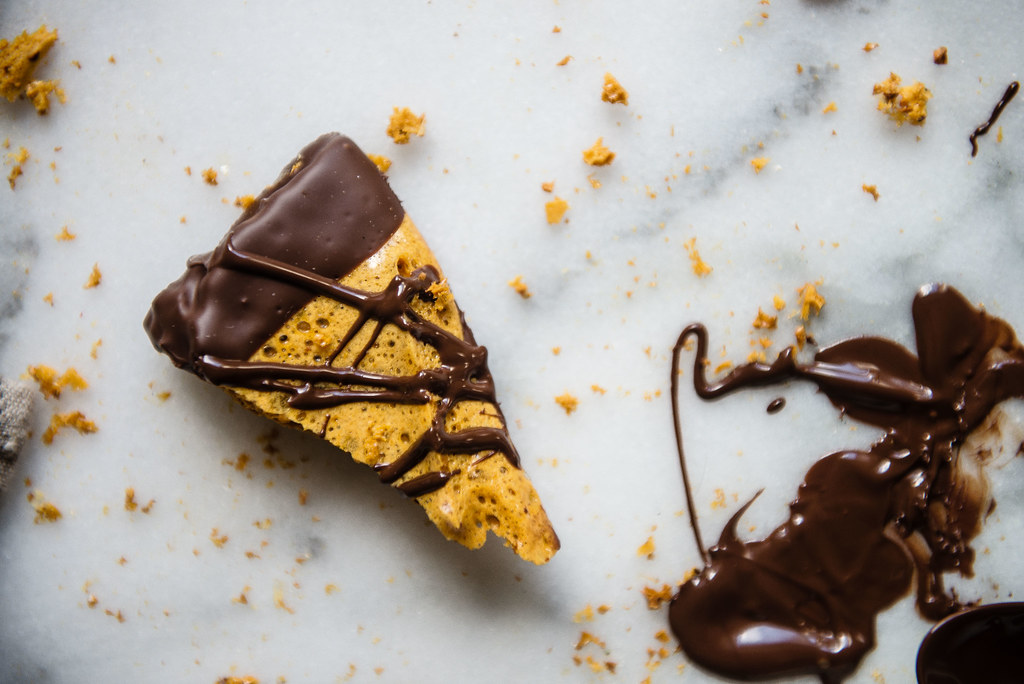 from The New Sugar & Spice: A Recipe for Bolder Baking, by Samantha Seneviratne (Ten Speed Press, 2015).

A few of my notes! I found it was fine to use parchment paper instead of buttered foil in the first step, which let me reuse the same parchment paper for the chocolate-dipped pieces. I also used rice vinegar instead of distilled white because that was what I had on hand. For the boiling, I find that my candy thermometer can be a little finicky sometimes — if yours is similarly untrustworthy, watch for the mixture to reach a dark maple syrup color (a tip I found helpful from Yossy’s version of honeycomb, which she swirled into ice cream!) and remove from heat immediately if you smell any hint of something burning. If you do slightly burn the caramel, no worries — I did that to one batch and found that it tasted kind of like a s’more when dipped in chocolate. 🙂 Finally, if you decide to dip the honeycomb partially, as I did in the photos, you may not need all 4 cups of the chocolate.

Also, a few variations — I made another batch with half maple syrup and half golden syrup as a subtly fall-flavored treat; for an earthy, herbed twist, I think you could omit the cayenne and add a sprig of rosemary while you bring the caramel to a boil, then carefully fish it out before the caramel reaches 300 degrees.