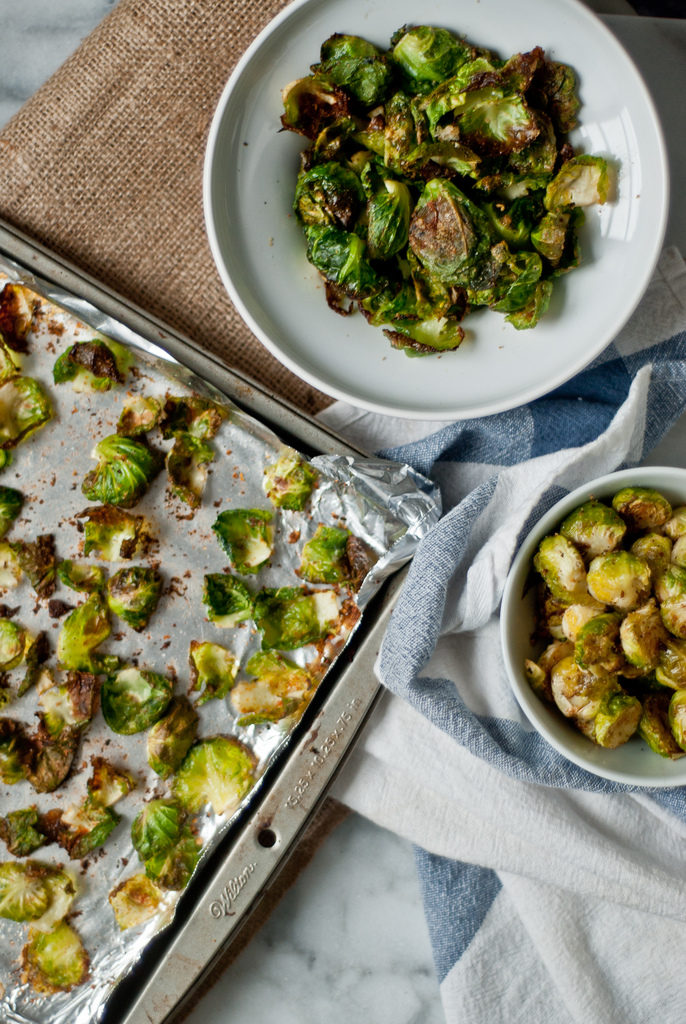 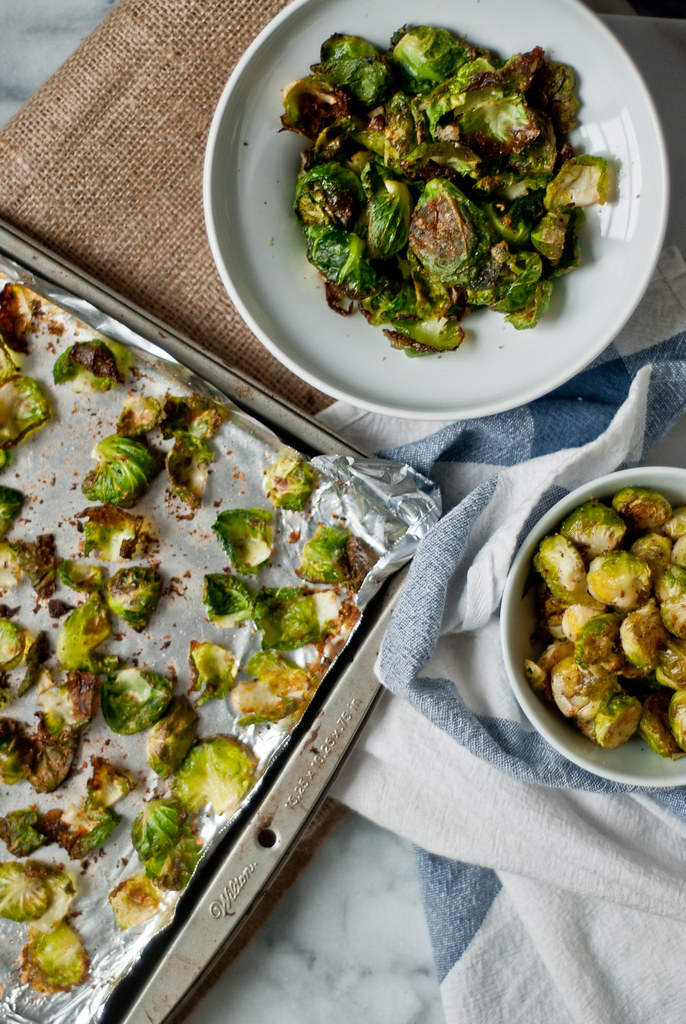 It’s almost Thanksgiving! So this week I thought I’d post on what seems to be the Thanksgiving vegetable of the year. If last week was about bucking trends (or being unable to participate), this week is definitely all about falling in line with them. At this point, I think I may be the last blog on the Internet not to have done a post on these toy cabbages. But just in case you’re not already Brussels’ed out, here’s several more ways to roast them — as chips and as hearts, and in three different flavors. (In other words, if you’re not Brussels’ed out, after this you will definitely be.) 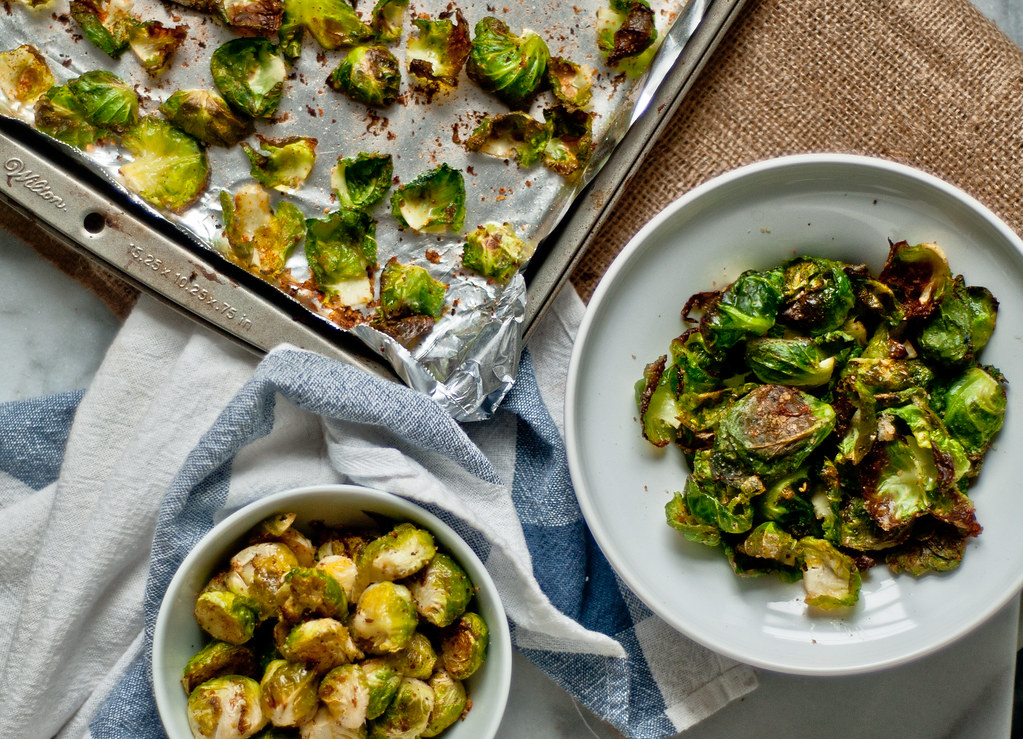 I love these vegetables because it seems like everyone has a story to tell about them. There are those people who, like me, never had them as kids and only know them in their newly vogue form, and there are those who are way too familiar with their pop culture horrors but have come around to them in this recent wave (I love this blogger’s story about her dad). 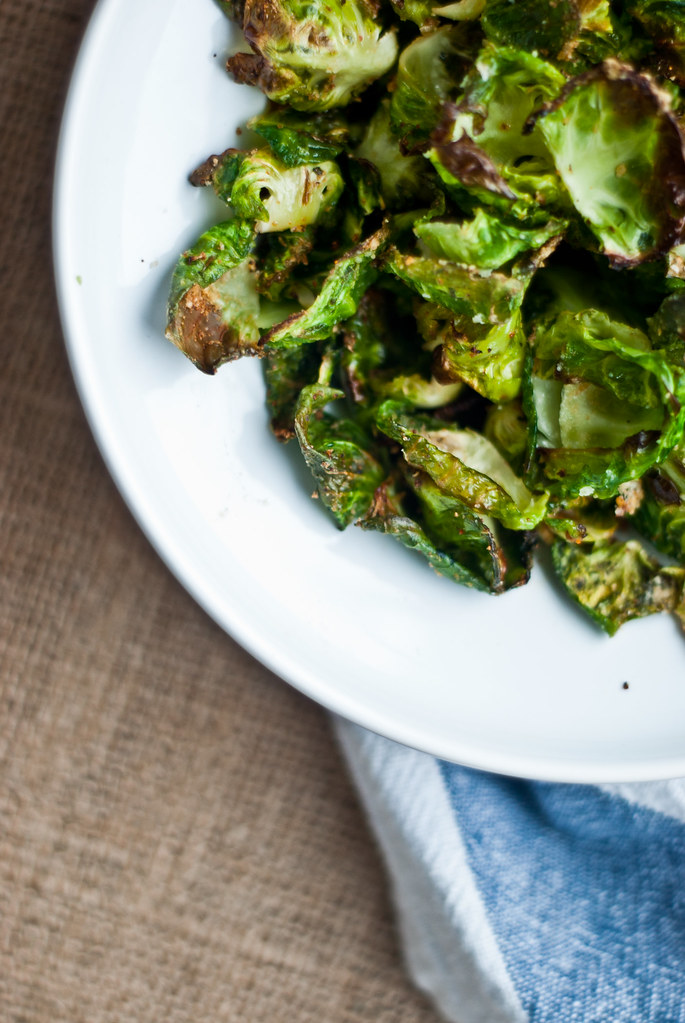 There’s even people, like Alysa at at Inspired RD, who had the exact same thought process as I did when coming up with this recipe for Brussels sprout chips — thinking wait, the sprouts are delicious and all, but these crispy, flavorful outer leaves of awesome? Can I just have those? Well, I’m a grown-up now, so yes. (I think Alysa described it more eloquently.) 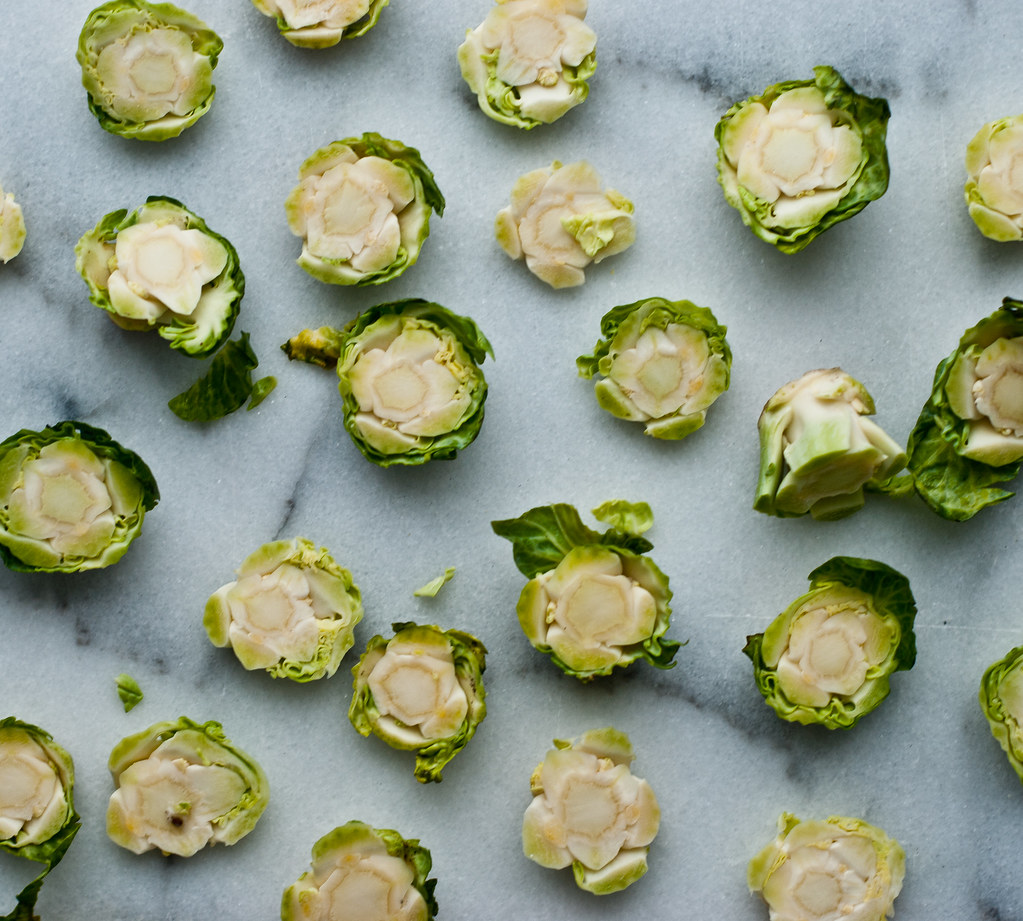 Personally, I’ve found I can eat Brussels sprouts in any form. Plain and raw when I’m supposed to be prepping them to cook, pan-fried with way too much oil (even if it made me feel like a herd of elephants decided to settle down in my stomach afterwards), roasted whole, and finally as chips. I’ve tried several seasonings — my three favorite are plain sea salt and olive oil, garlic and parmesan, and spicy garlic cayenne. I honestly don’t know how I like them best, which is why I do the following:

And then eat the rest, straight out of the pan. 🙂 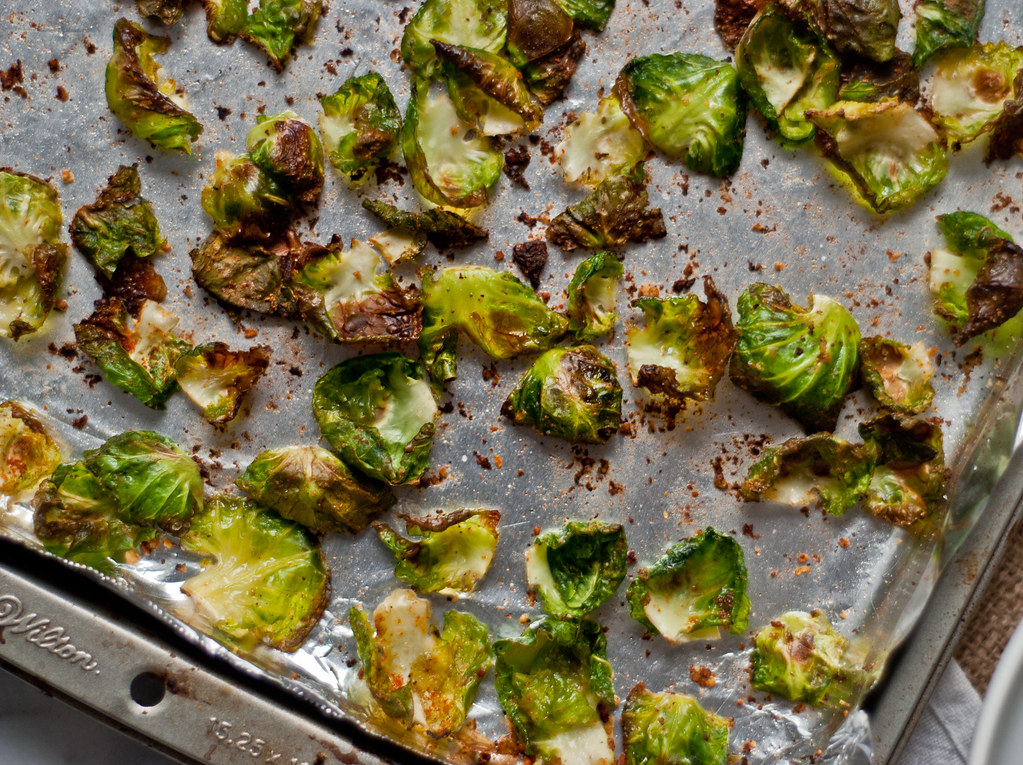 Roasted Brussels Sprouts, a Million Ways (more like, Three)
By the way, if it’s three flavors and two parts of the sprouts, is that three ways or five? Six? I’m bad at math.

1 lb Brussels sprouts (or any amount you feel like, really — just adjust the seasonings if you use more or less sprouts)
about ½ to 1 tbsp olive oil
sea salt, to taste
black pepper, to taste

1. Preheat your oven to 400 degrees.
2. Slice the stem off one sprout. Peel off as many outer leaves as you can. If there are still loose leaves but they won’t come off, slice off a bit more of the bottom and peel again. Set the leaves aside in a large bowl; slice the heart in half and place in a separate bowl.
2. Repeat until the sprouts are all done. If the sprouts are a bit damp, pat them until thoroughly dry.
3. Drizzle olive oil over the leaves and toss until each leaf is thinly coated. Sprinkle salt and pepper over the leaves to your preference. I like mine well-salted. Repeat for the hearts.
4. Decide if you want to add additional flavor — I think my favorite is garlic parmesan, but all of these are fantastic, including just having them plain. Add the additional seasonings (½ tsp garlic powder and 2-3 tsp parmesan for garlic-parmesan, and ¼ tsp cayenne and ½ tsp garlic powder for spicy garlic cayenne) and toss again to coat.
5. For the leaves, spread them evenly across the baking sheet, leaving a bit of space between each leaf, and bake at 400 degrees for 8-10 minutes, or until the edges are brown. Keep an eye on them, because they can burn quickly. (But they still taste pretty good burnt! I speak from experience, since my oven has hot spots.)
6. For the hearts, do the same, but bake a bit longer — it will take about 15-20 minutes, at least, and 20-25 if you’d like them nice and brown. 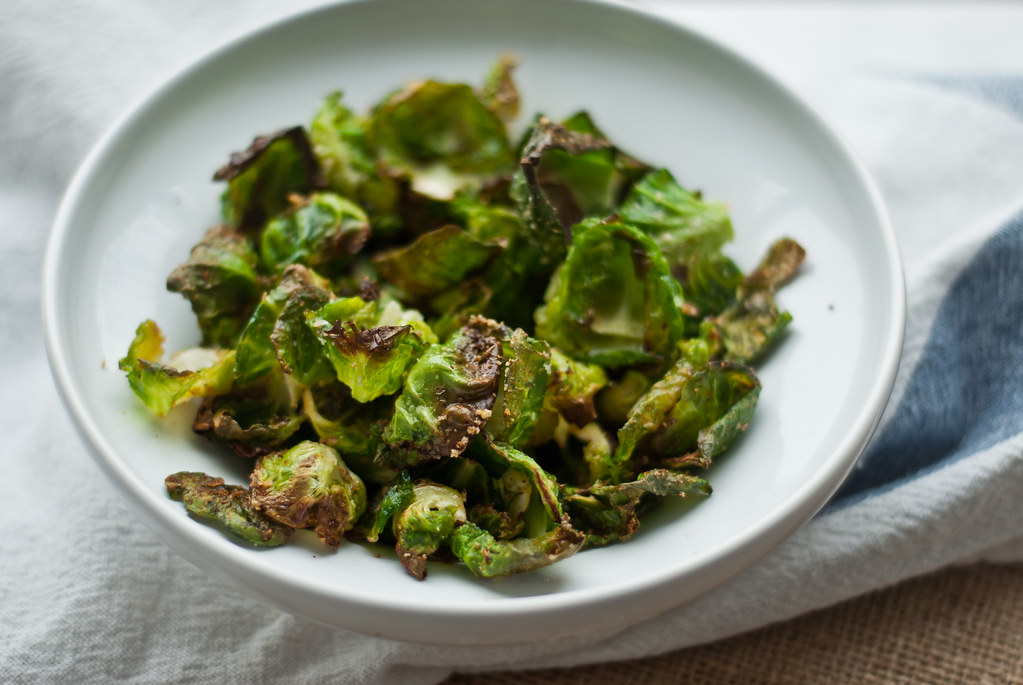