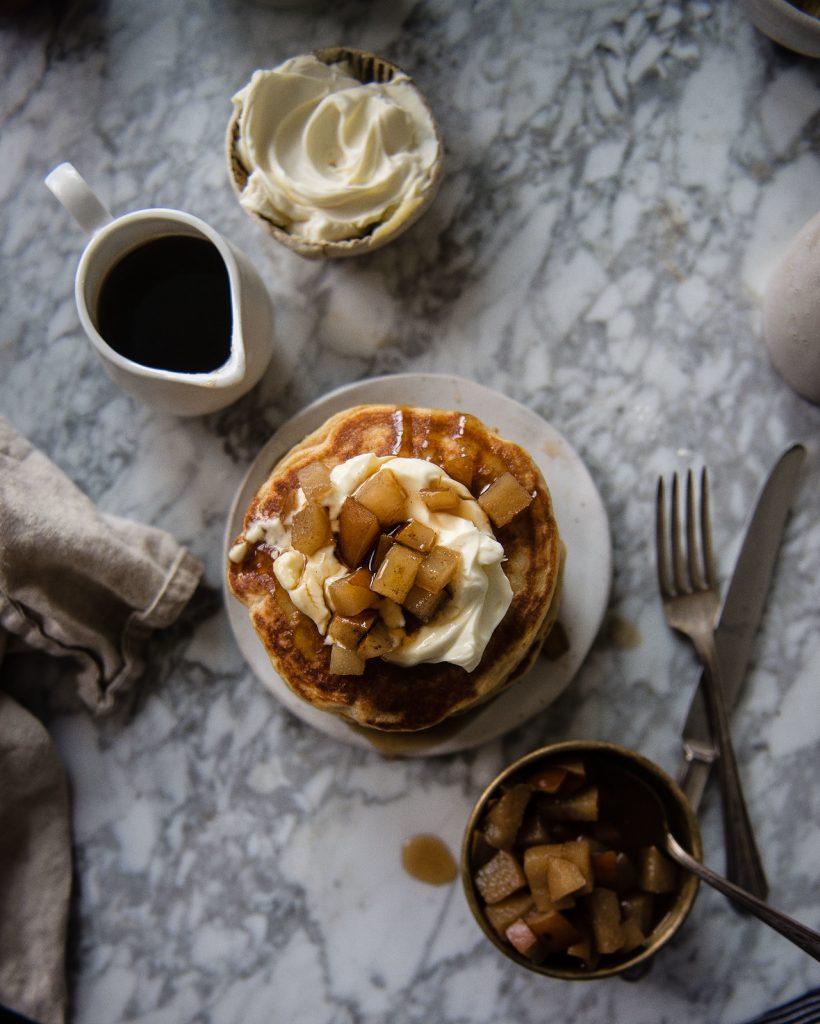 Even with the advent of a waffle-maker to capture my interest (and my kitchen real estate), I can never go too long without coming back to pancakes. They’re happy food — from my dad and boxed pancake mix on the weekends, flicking the skillet to flip them in mid-air, to a beach retreat in college where a classmate showed me that, forget blueberries, you could sprinkle Reese’s Pieces across the pancakes before flipping them and be a breakfast hero, to rainy weekends in the working world where pancakes meant a lazy morning with time to spare for messy counters and sticky plates. Now that B3’s around, I can’t stop telling B2 like a broken record how excited I am to make piles of pancakes on Saturday mornings for an army of bubs clamoring for them. (I recognize that this may not match up with reality, when all I really will want to do then is sleep.) 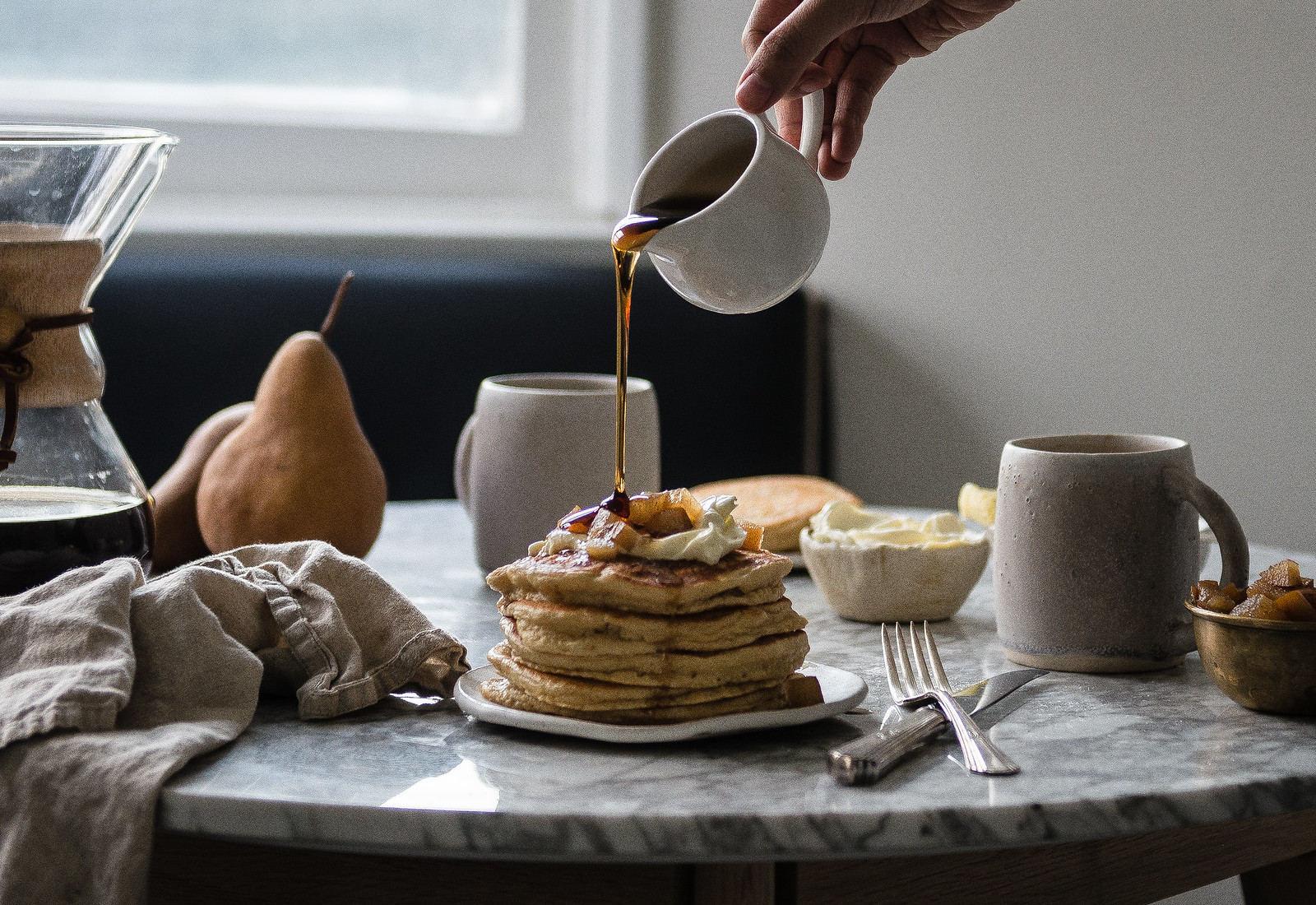 Heading further into the land of adulthood and closer to my dream of setting up my own mini IHOP for a table full of littles means that I’m always happier to find small ways to make pancakes more wholesome. There’s toasting up some oats for earthy oat pancakes or replacing some of the flour with buckwheat or white whole wheat flour, which were all previous favorites, but once King Arthur Flour introduced me to sprouted wheat flour earlier this month, they’ve all paled in comparison to this new gem.  I’d never heard of sprouted wheat flour before this, but it turns out that it’s made (as you might guess) from white whole wheat berries that are misted with water and allowed to sprout before  drying and milling.  The sprouting process makes for a whole grain that doesn’t act like a typical whole grain, but is fine and soft in texture, yet still has all the fiber and nutrition of whole wheat.

King Arthur Flour recommends subbing it 1:1 in recipes calling for whole wheat and up to 50% in recipes with all-purpose, and lo and behold, replacing half the flour in my favorite pancake recipe with sprouted wheat flour made for incredibly fluffy, melt-in-your-mouth pancakes that I swear might have been even softer and more tender than their regular counterparts, with a subtle sweet, nutty flavor. You could go with straight butter and maple syrup and call it a day, but a quick vanilla pear compote (that I’ve been putting on absolutely everything) and a dollop of Greek yogurt or mascarpone never hurt anything, and it definitely didn’t here.

Thank you to King Arthur Flour for sponsoring this post and providing the delicious sprouted wheat flour used here! All opinions are, as always, my own. 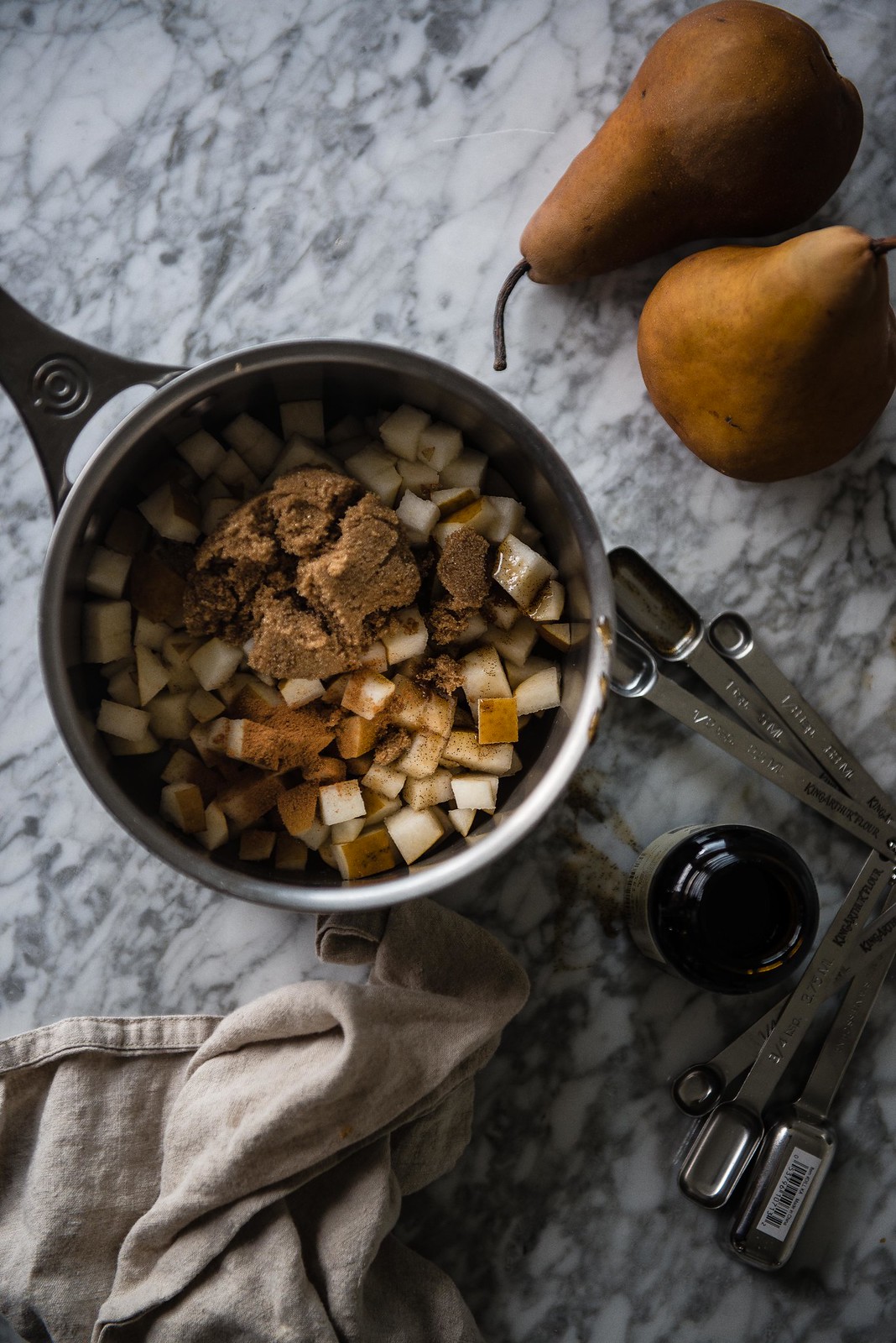 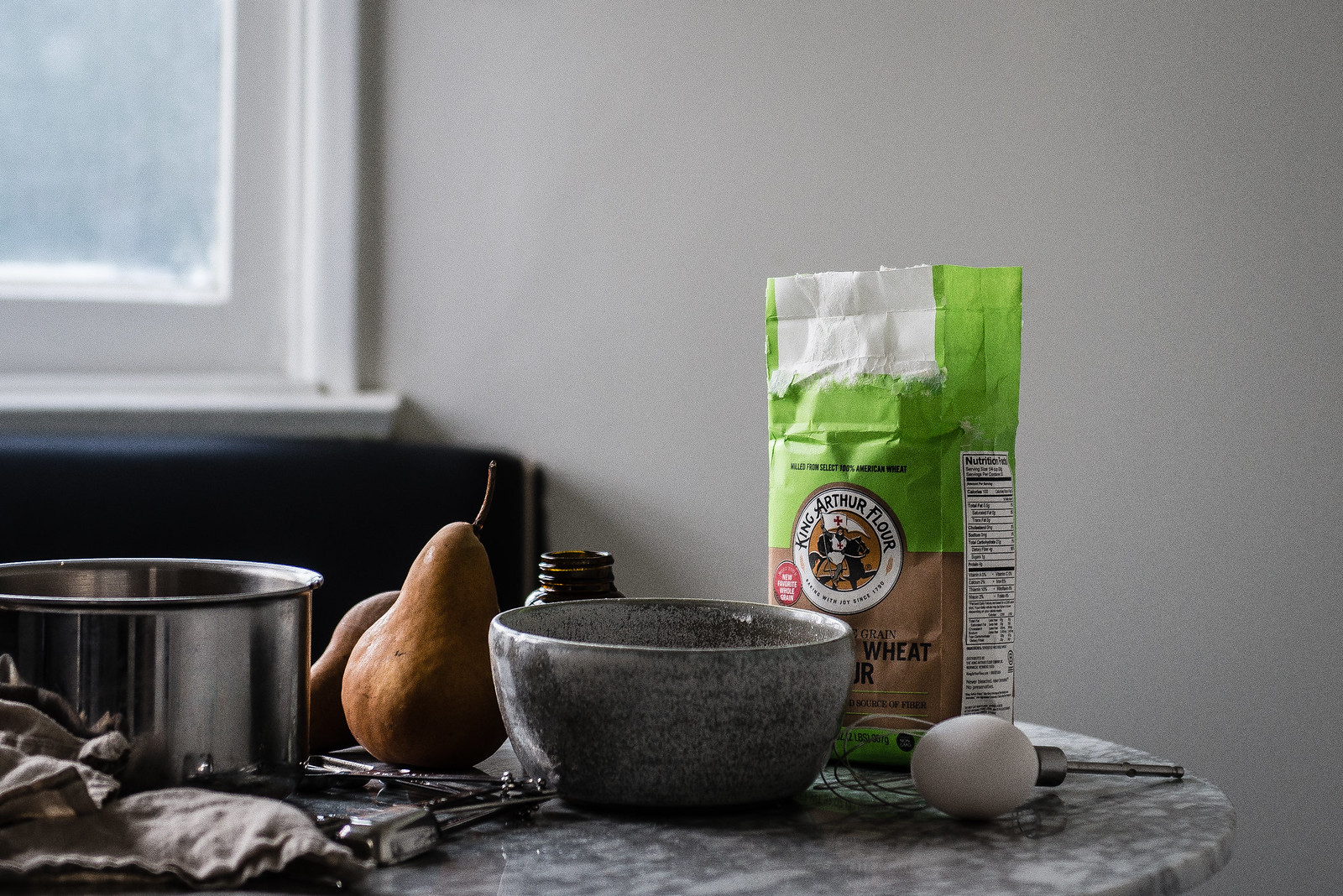 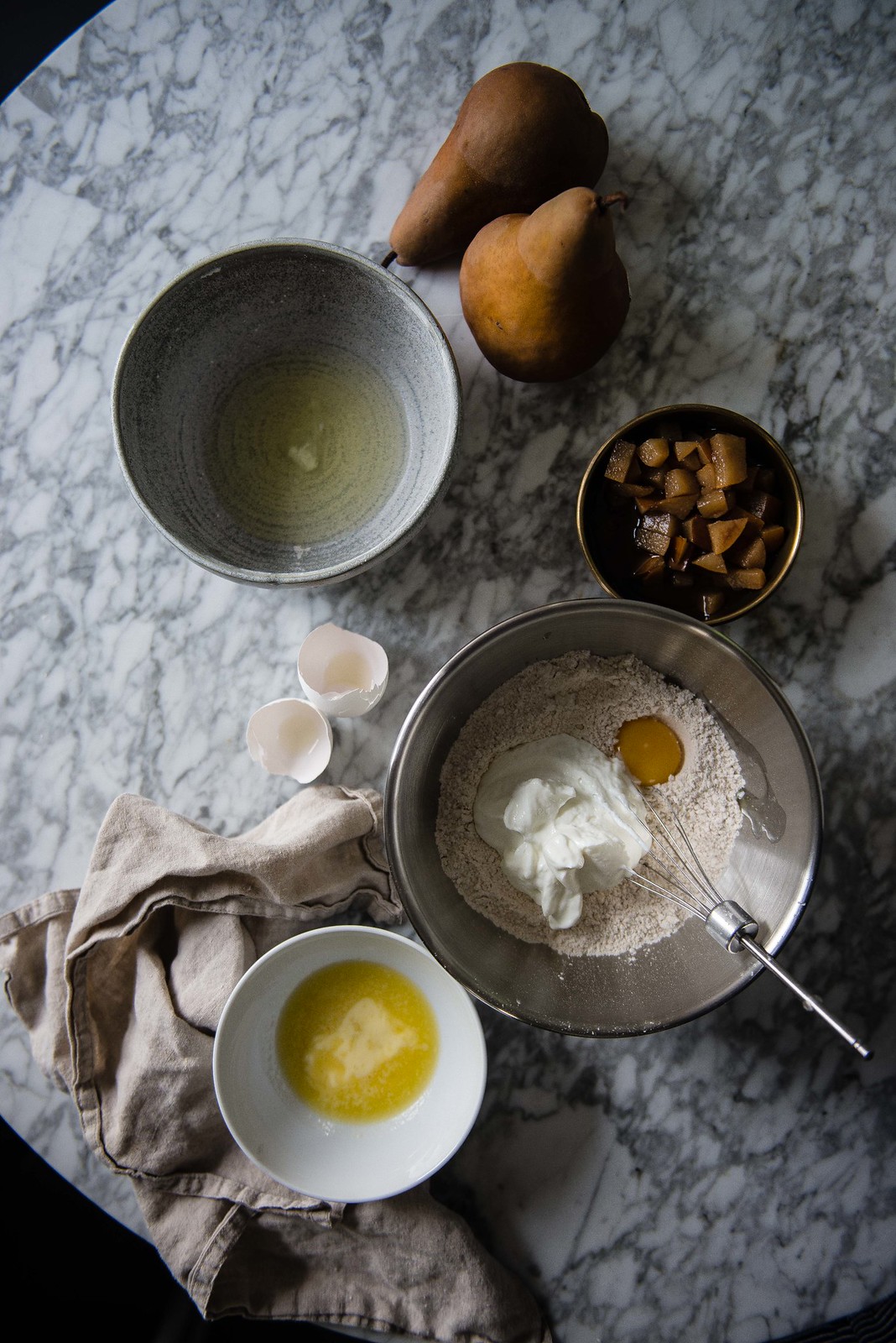 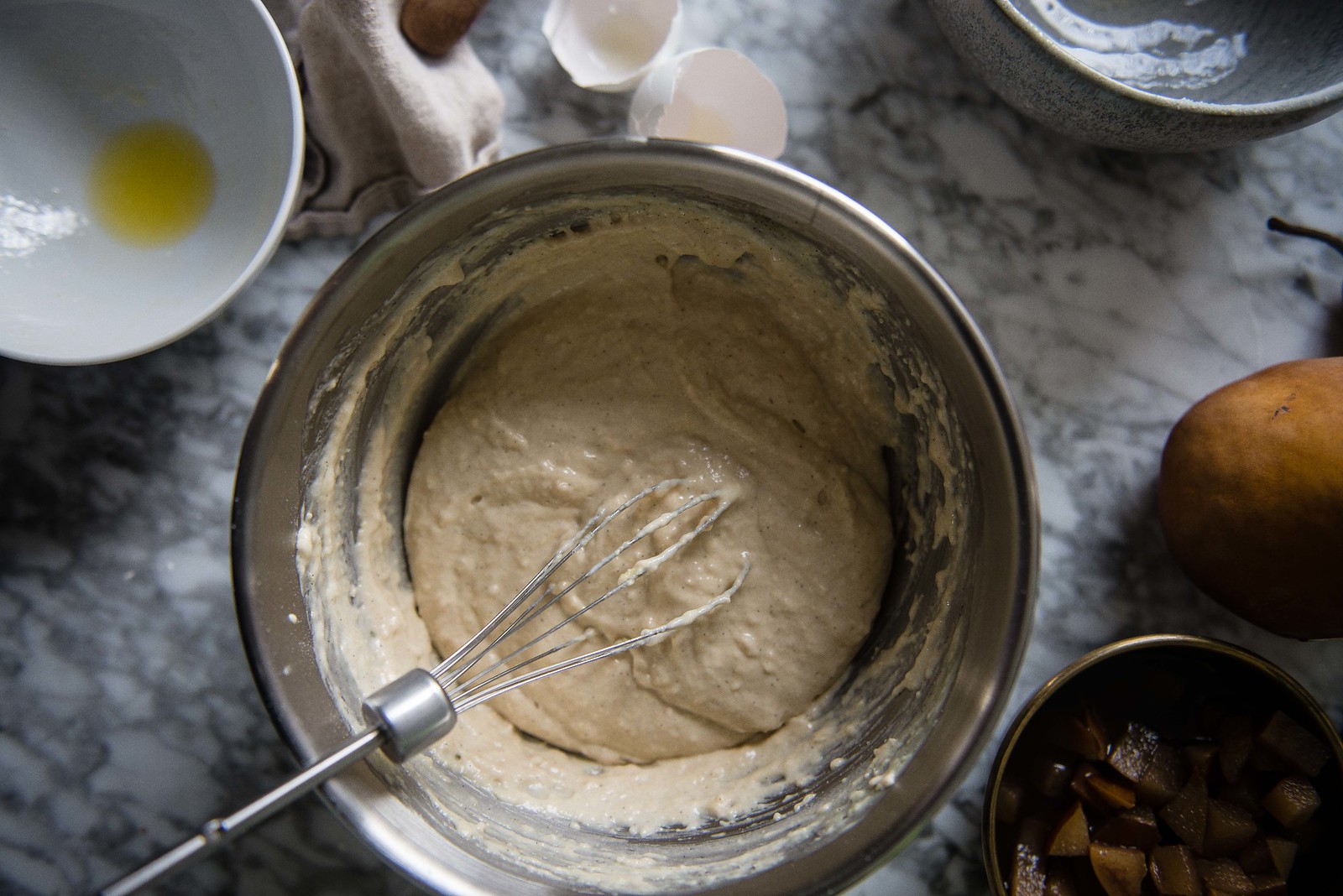 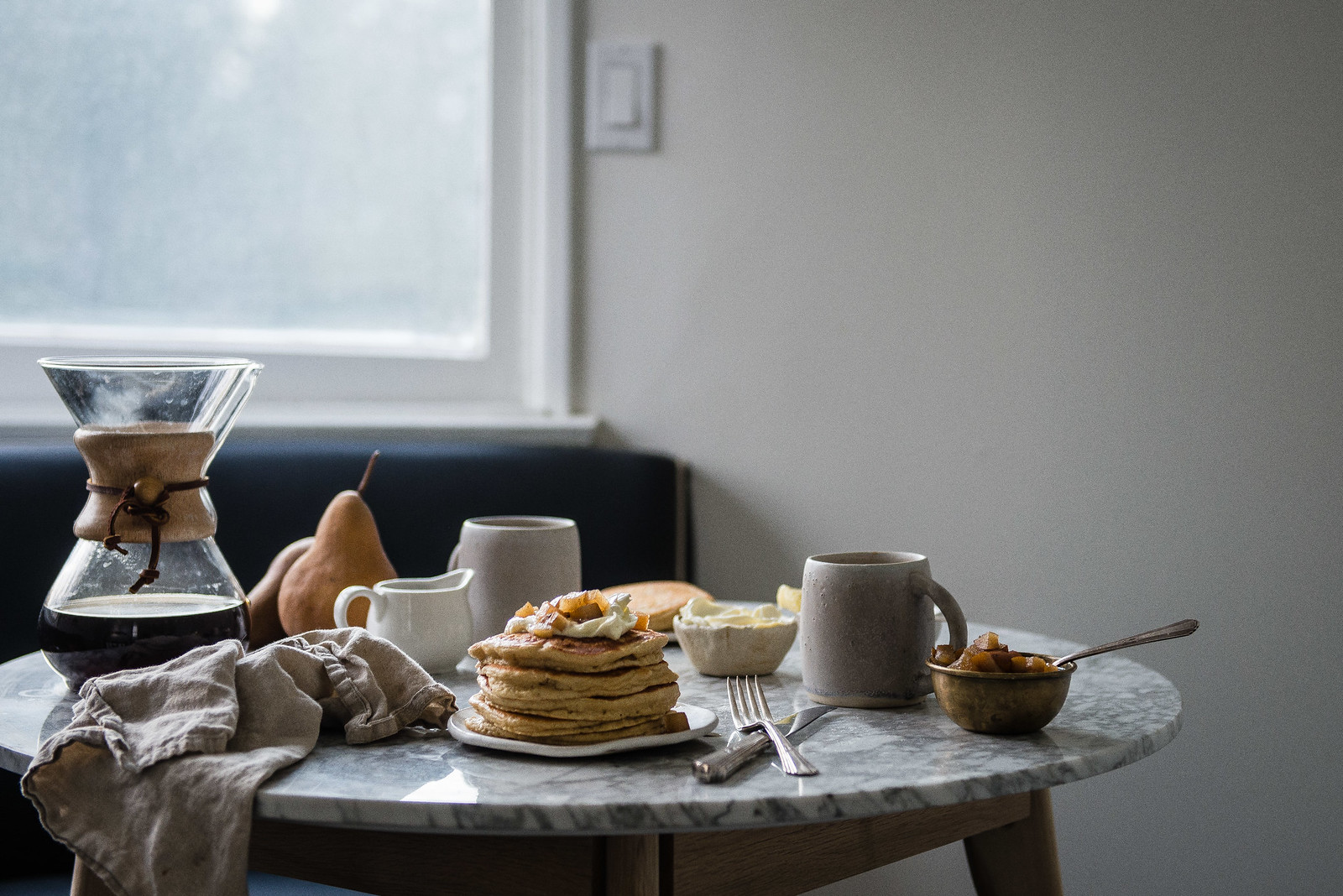 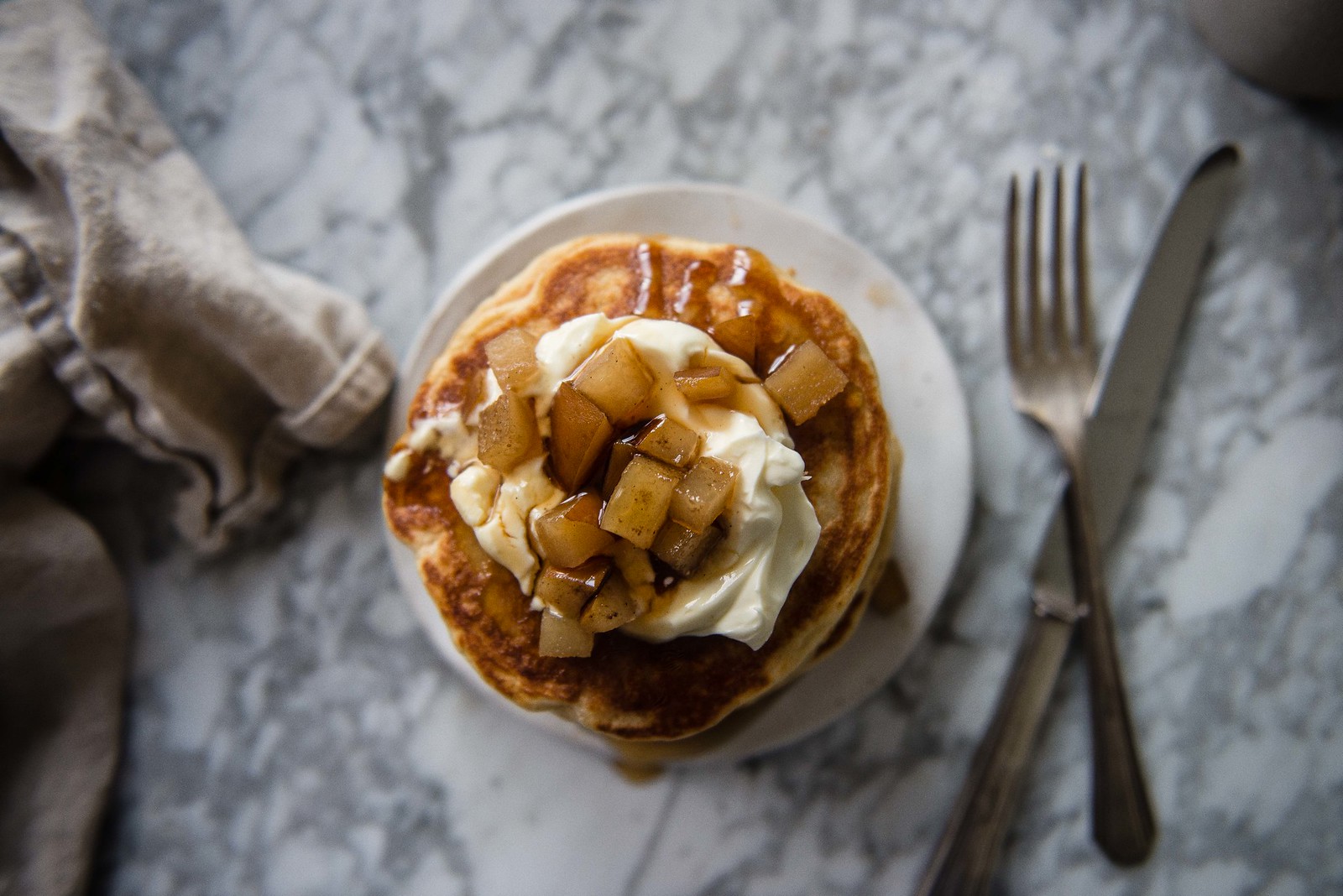 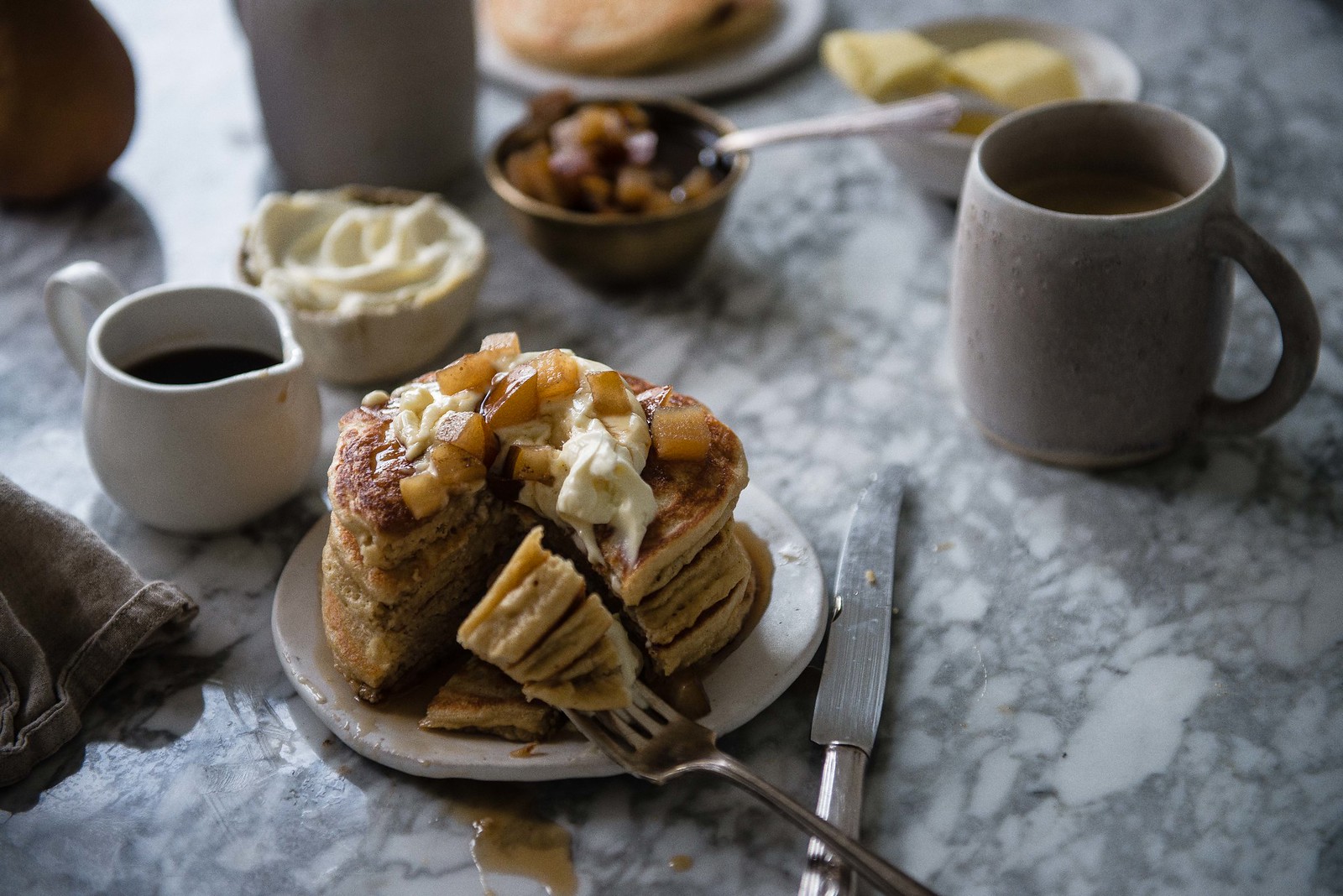 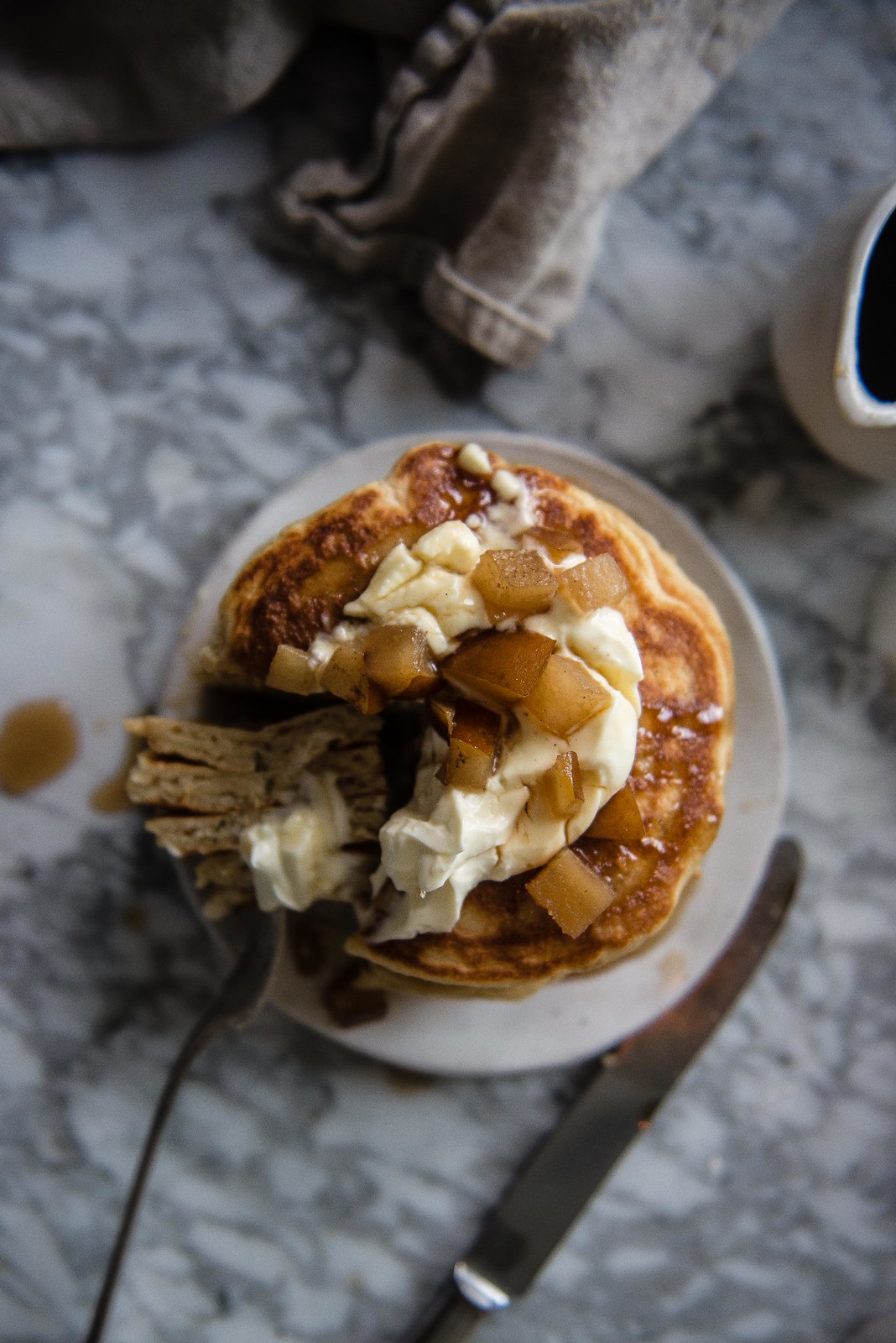 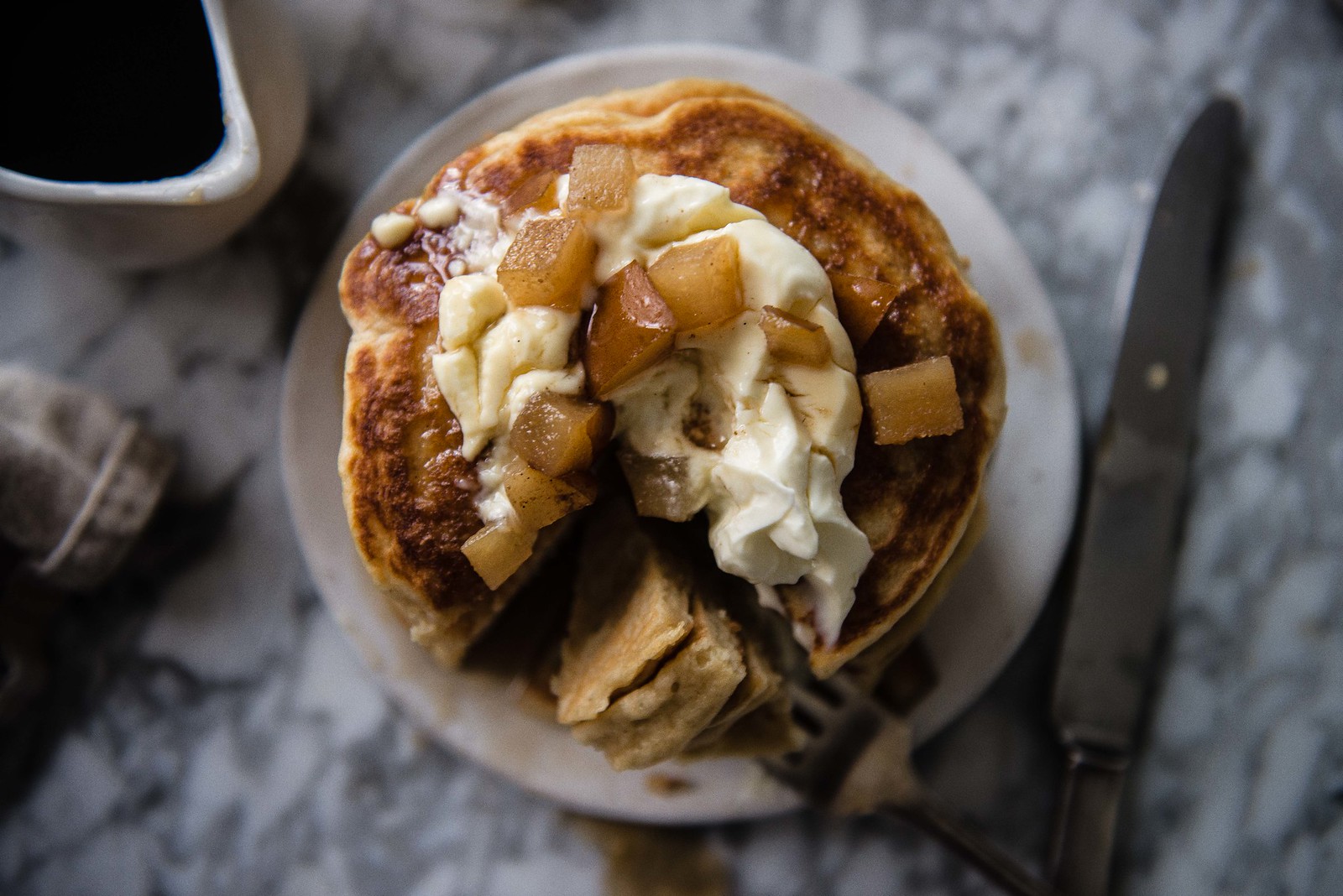 You will have plenty of pear compote left over — use it on more pancakes, waffles, or my weekday favorite, in yogurt parfaits. Compote will keep easily up to a week.