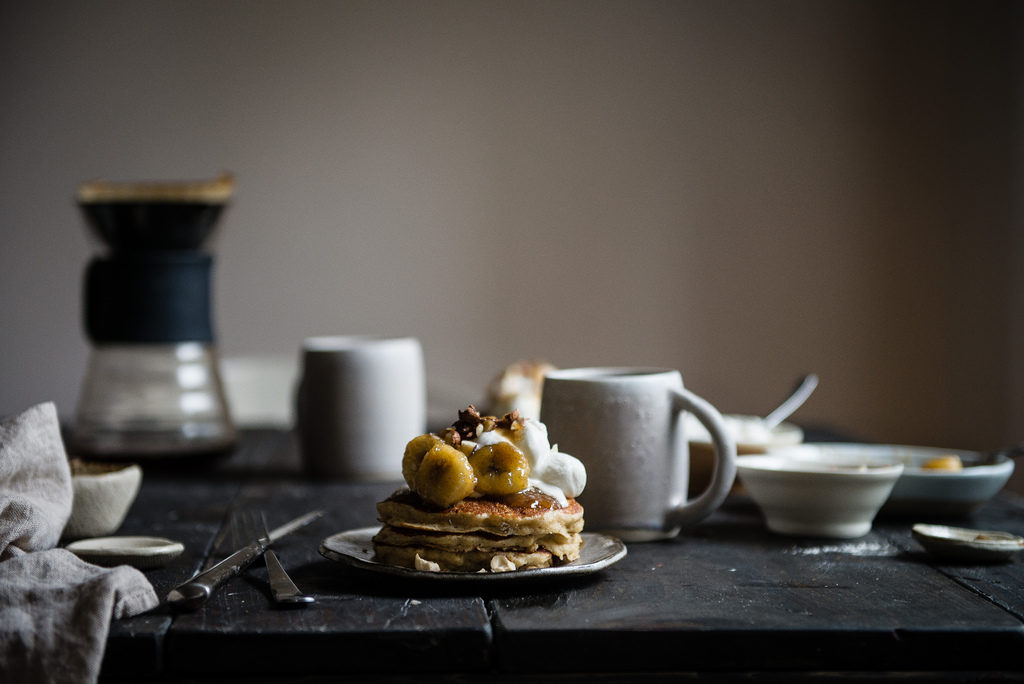 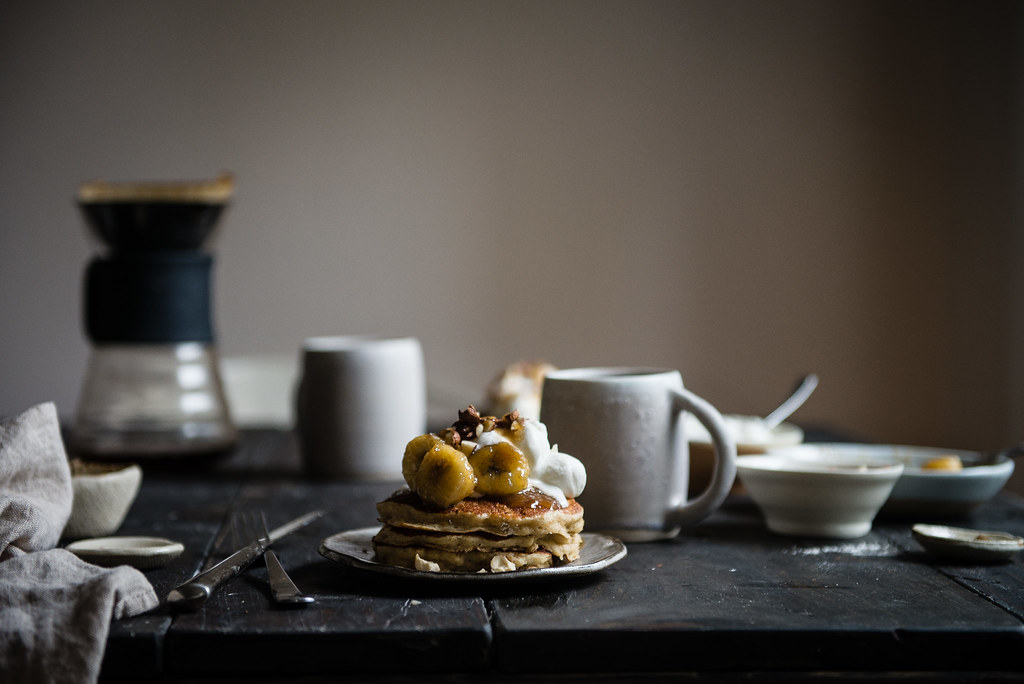 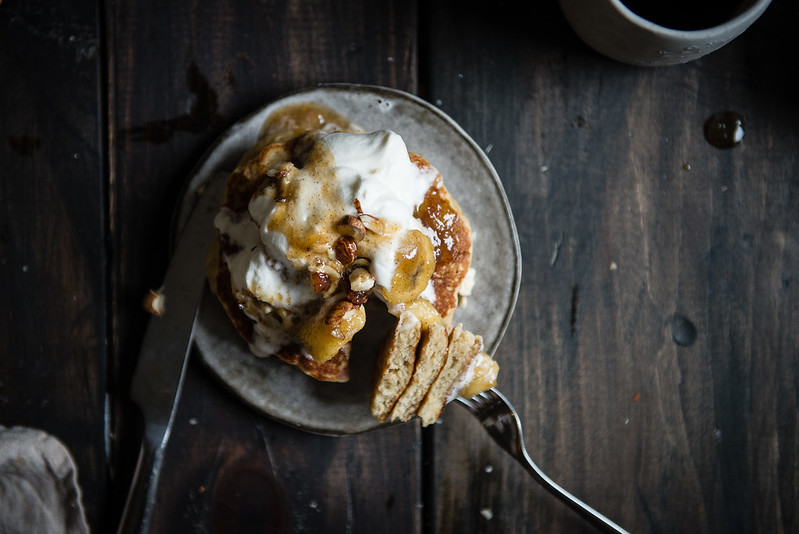 You know what I really love (besides pancakes)? The things that you just know are going to be good before you get to try them.  Black sesame soft-serve.  This nubbly sweater that just came in the mail.  (But not the other one that I’m returning. Or the shirt.)  Emoji updates.  (Tacos!  Cheese!)  Everything about this.  It’s like you see it, you just know, and that’s pretty much exactly how I felt when I saw this caramelized banana French toast last year.  Cloaked in buttery brown sugar caramel, gently spiced, and cradled by carbs, it was Sunday morning perfection — I don’t know if I’d ever given thought to caramelized banana goodness in breakfast before then, but I’m now convinced it belongs in any and all breakfasts imaginable.

Like, say, pancakes!  I mean, the extra sauce from the caramelized bananas is its own pancake syrup — it was meant to be.  So I paired this new crush with my old favorite, and this is what resulted.  I took my cues from Kenji and added a touch of oat flour to give the pancakes enough heartiness to stand up to the bananas, along with some brown butter for extra warmth.  I’m loathe to say anything bad about pancakes, but if there was one thing (other than the fact that they aren’t bottomless), it’s that they tend to blow me up like a balloon yet leave me hungry again a few hours later — so I liked that the oats helped with that.  And then I went and undid that healthfulness by finishing these with generous dollops of bourbon-spiked whipped cream.  (Though you could totally swap out the whip for Greek yogurt, which would really make this breakfast stick.) All in all, the many things at play here are all notes on the same scale, even if they refused to all fit in the post title — things toasted, browned, and caramelized, gently coaxed into warming flavors that aren’t quite autumnal yet (guys, I’m still not ready) but full of comfort and lazy weekend vibes.  Hope your weeks ahead are full of the same, friends! 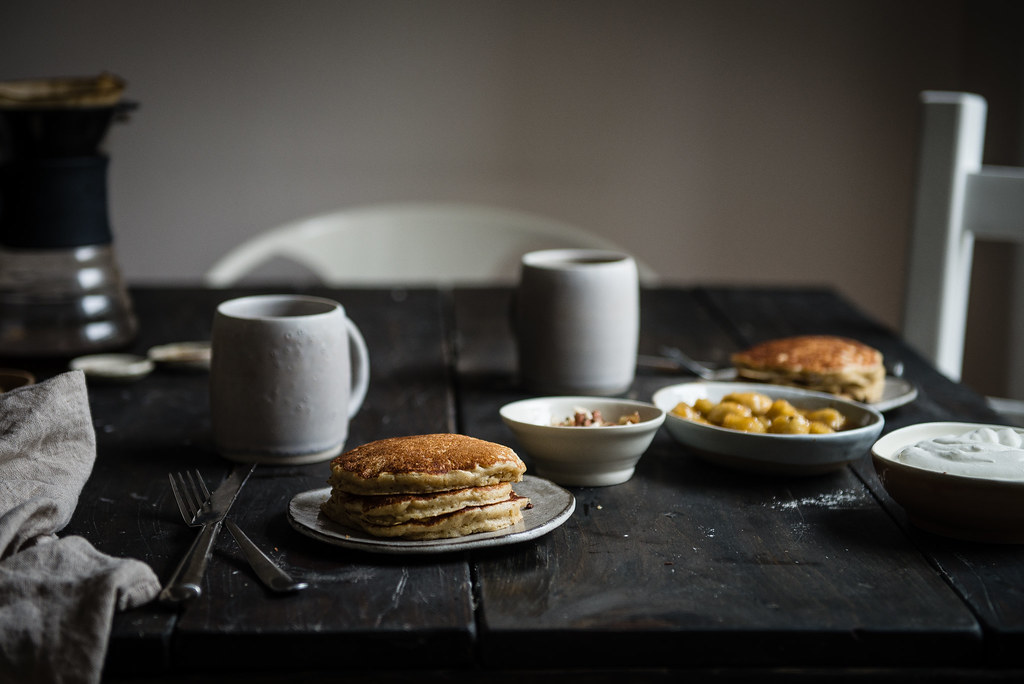 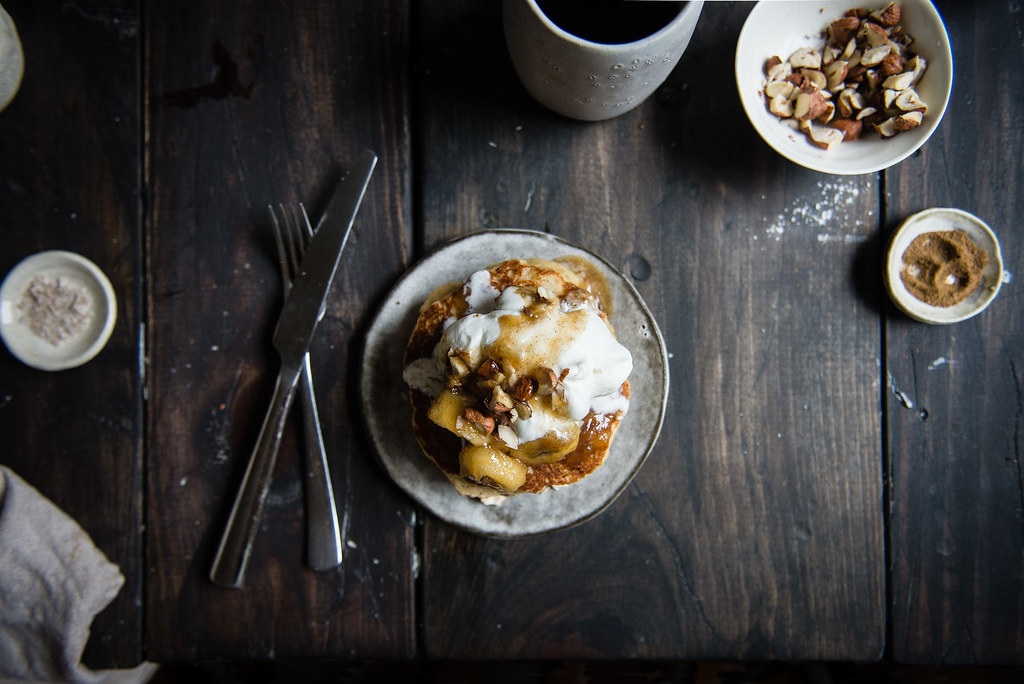 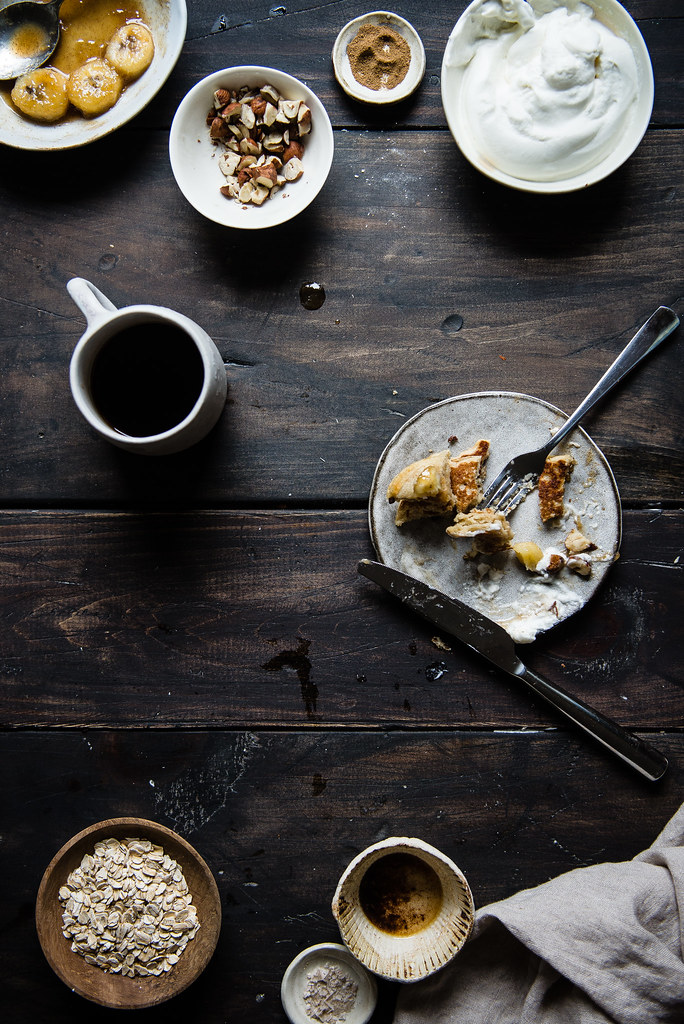 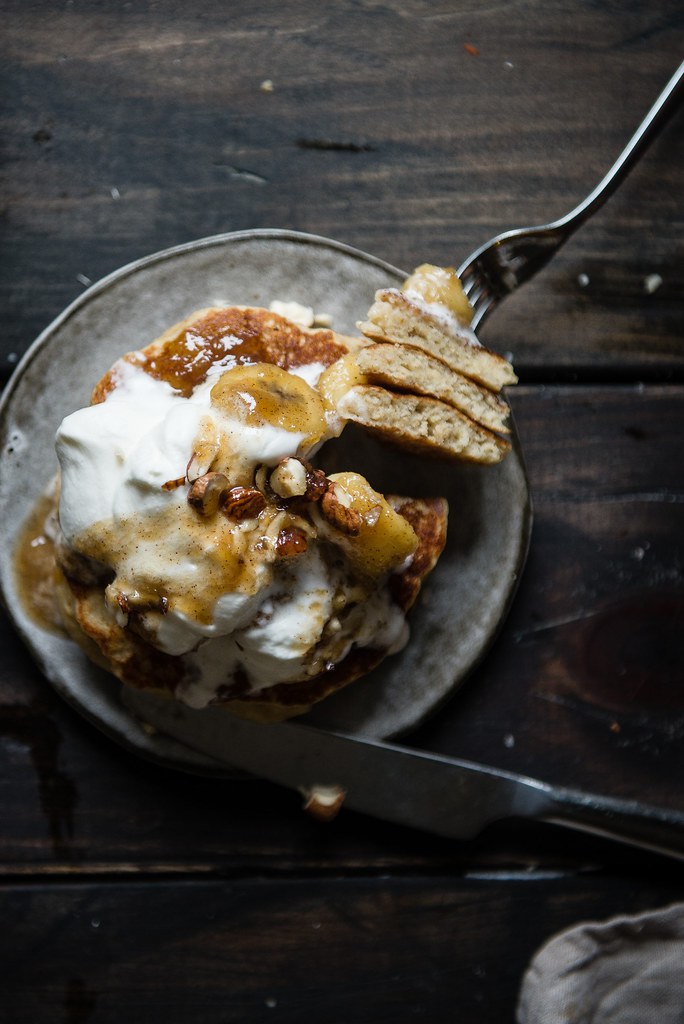 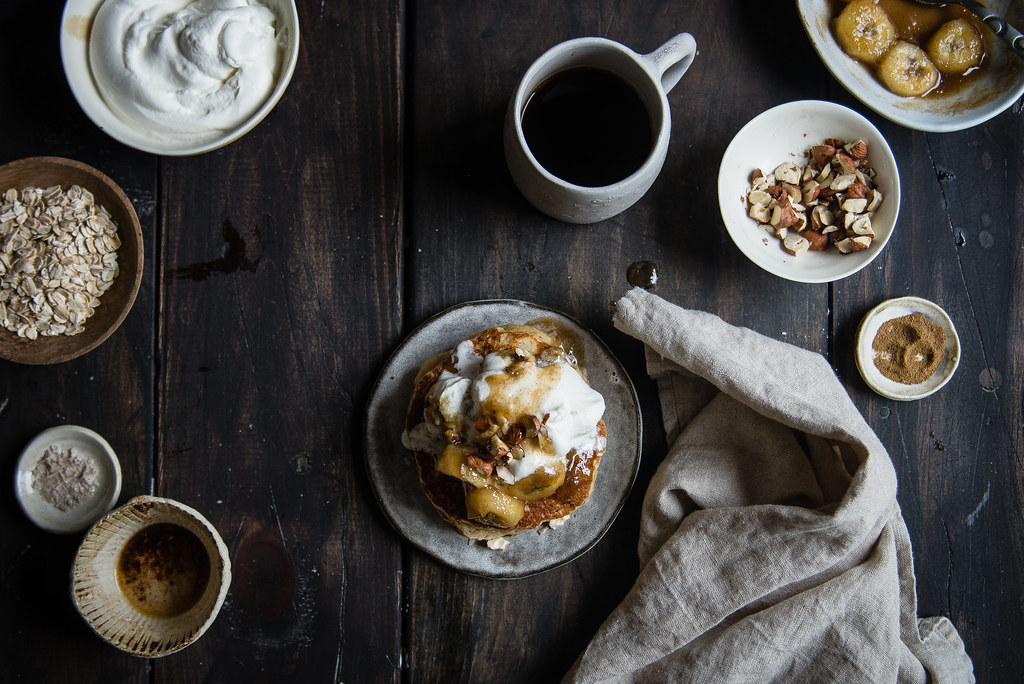 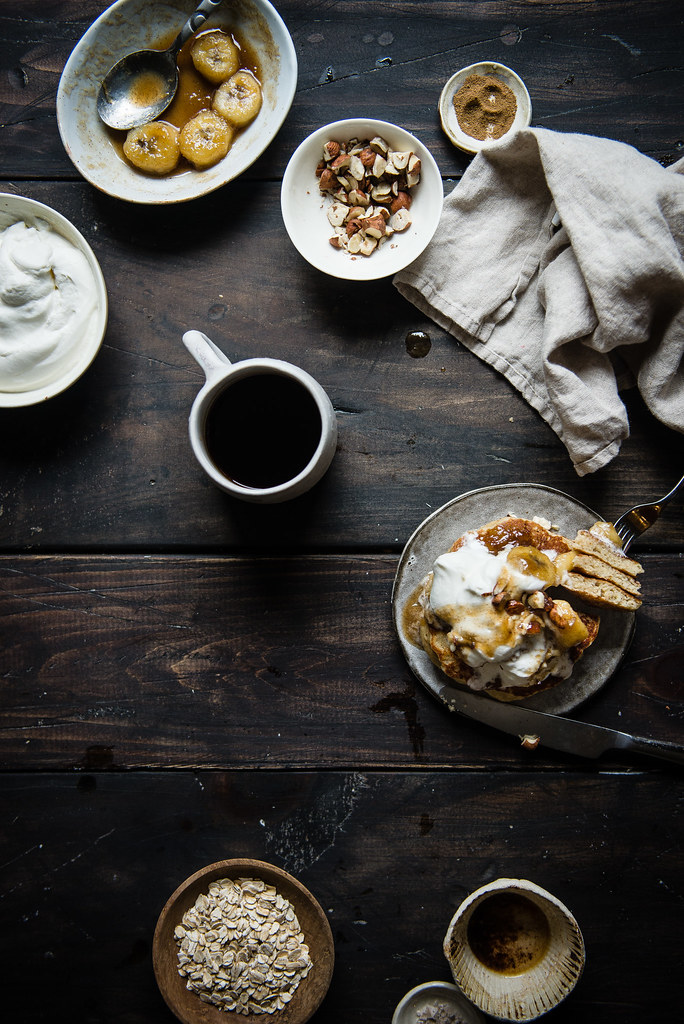 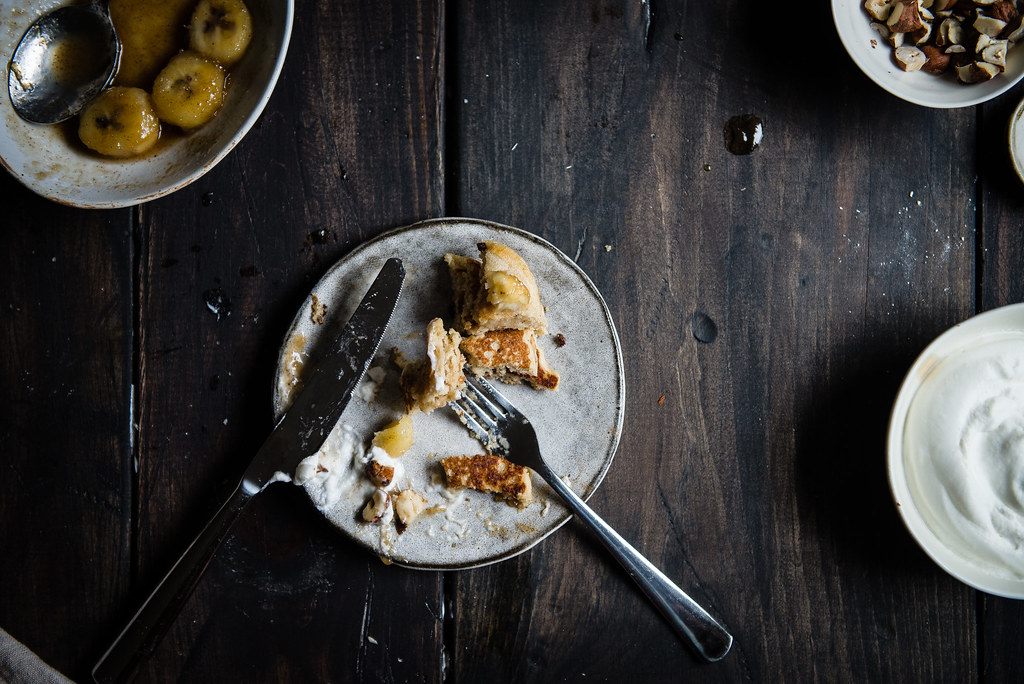 Inspired by I Am a Food Blog and J. Kenji Lopez-Alt.

Feel free to replace the bourbon whipped cream with Greek yogurt, which would both simplify and lighten up the recipe a bit. If you don’t happen to have oats around, 1 cup all-purpose flour (total) will serve you just fine instead.

Oh, and I almost forgot to mention! This will make considerably more bourbon whip than you will need (unless you’re a whipped cream eating machine). Here’s a suggestion for the extra — fold about 1/4 cup sweetened condensed milk and a touch of vanilla extract into it, then pop it into the freezer for no-churn bourbon ice cream! (I did a crazy thing and added a half-teaspoon of matcha powder, and it made the most unexpectedly tasty matcha bourbon ice cream, but I won’t force that on you unless you’re weird like me.)