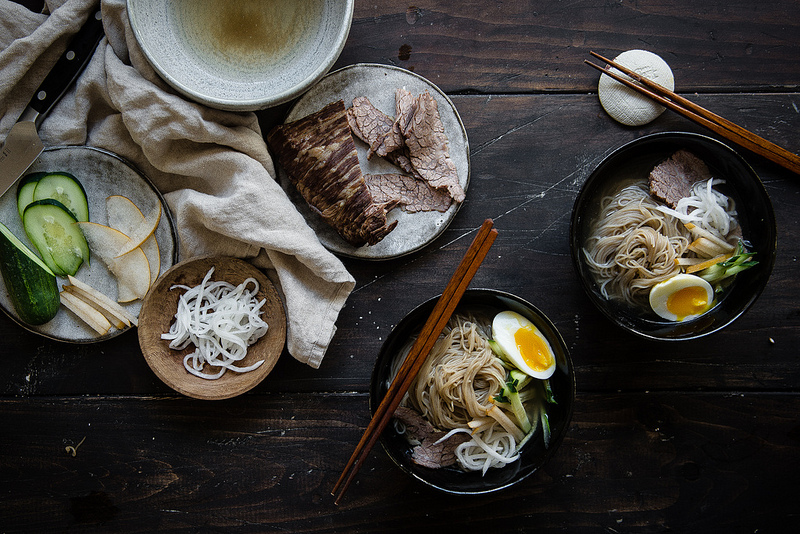 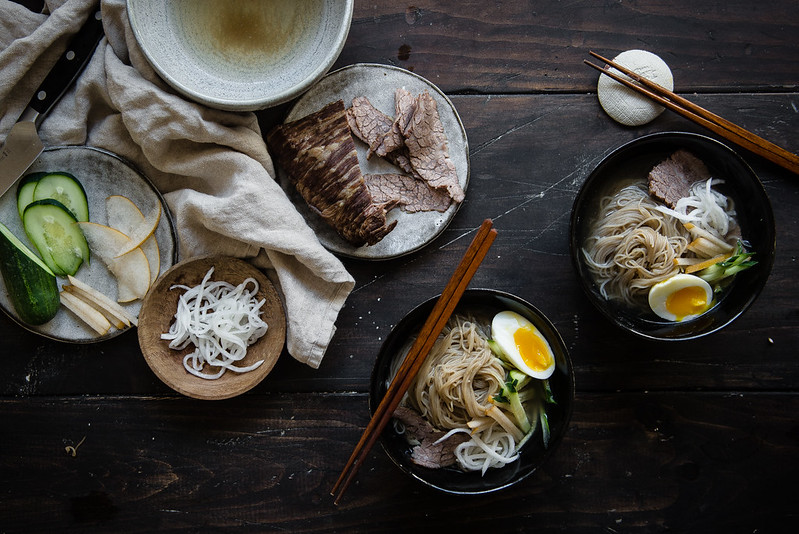 It’s the last week of August and I’m sad about it! I know, technically summer doesn’t end for another three weeks and change, it’s still plenty humid here in Brooklyn and the heat in the subway stations still closes around us like a fist every morning on the platform, but my grieving has already started. I’m such a sucker for spring and summer. Sunscreen smells like happiness! Long days and sleeveless tees and flip-flops are the way to my heart.

B2 keeps laughing at me whenever I start (prematurely) mourning the end of summer, because against all summer-loving logic I’m actually a fussy Gussy when it gets too hot.  I spend the hottest parts of the year squirming out of his hugs or kicking off the sheets or turning up our fan.  (And then stealing the sheets back.)  So I really make no sense.

Lucky for me and for his patience, though, we have these noodles. Mul naengmyeon is meant to be served with bits of ice actually floating in the broth, so it’s thoroughly bone-chilling, perfect for defusing an overheated me and amazing for this time of year.  I first tried it when B2 ordered it at a Korean restaurant a few years back and I was entranced with my first unwieldy slurp.*  The noodles are springy and pliant, so stretchy and stubborn that a lot of places serve them with scissors, and the broth is simmered from a combination of chicken stock, beef brisket, vinegar, and sugar for a soothing combination of savory, tart, and sweet.  Finally, the toppings correspond neatly to each flavor — a sliced egg and some brisket for umami, crunchy daikon and snappy cucumber for tang, and Asian pear for sweetness.  If you’ve ever been in Asia during the dog days of summer, it’s easy to see how a soup like this might come about, all fresh textures, smooth noodles, and icy-cold broth in a giant, frosty stainless steel bowl.  It’s pretty much as good as AC.

So here’s one more summer lunch to round out August and pave the way to cooler days.  Hope you’re all having a lovely late summer!  Yeasted doughs, cinnamon, and nubbly throw blankets, I’m ready for you.  (No, I’m not.)

*P.S. On top of being a fuss, I’m also one of those excellent dinner companions that spends all my time stealing my date’s food because I like it better.  Including when the noodles are extra chewy and slippery and hard to break, so it involves craning my head over across his place setting and takes forever and gets messy and kind of awkward.  B2 married so well. 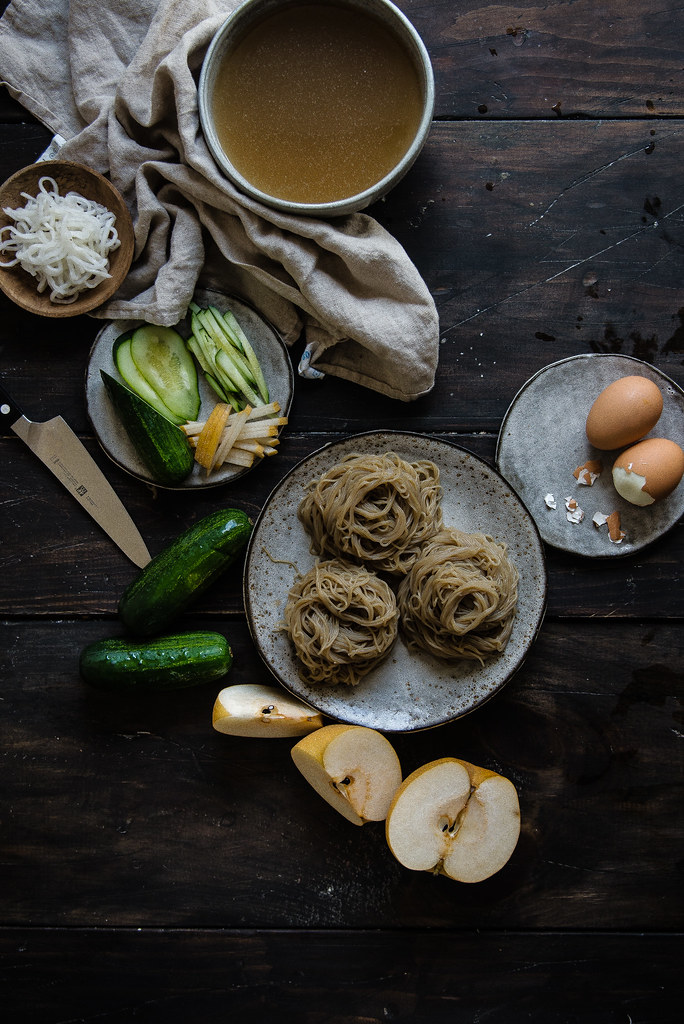 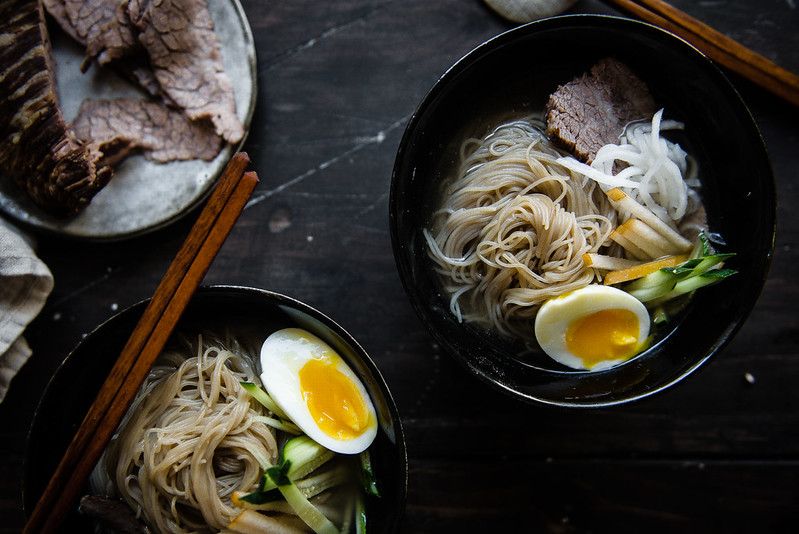 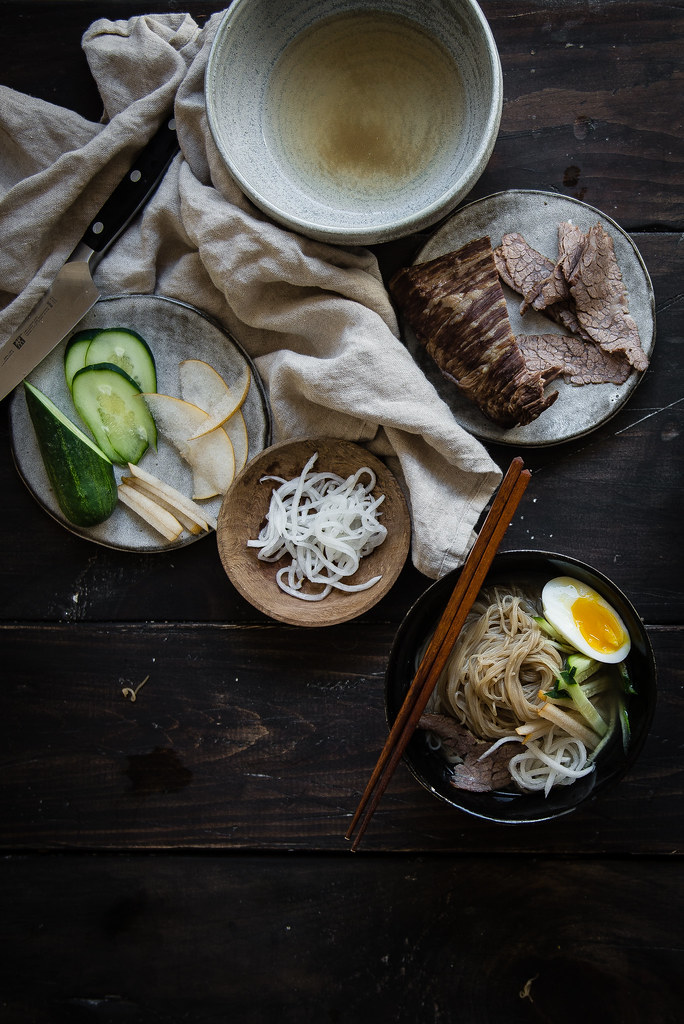 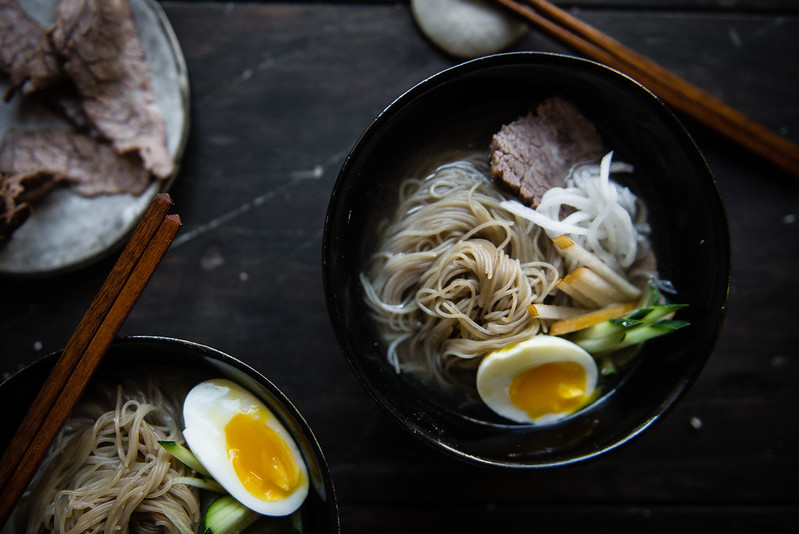 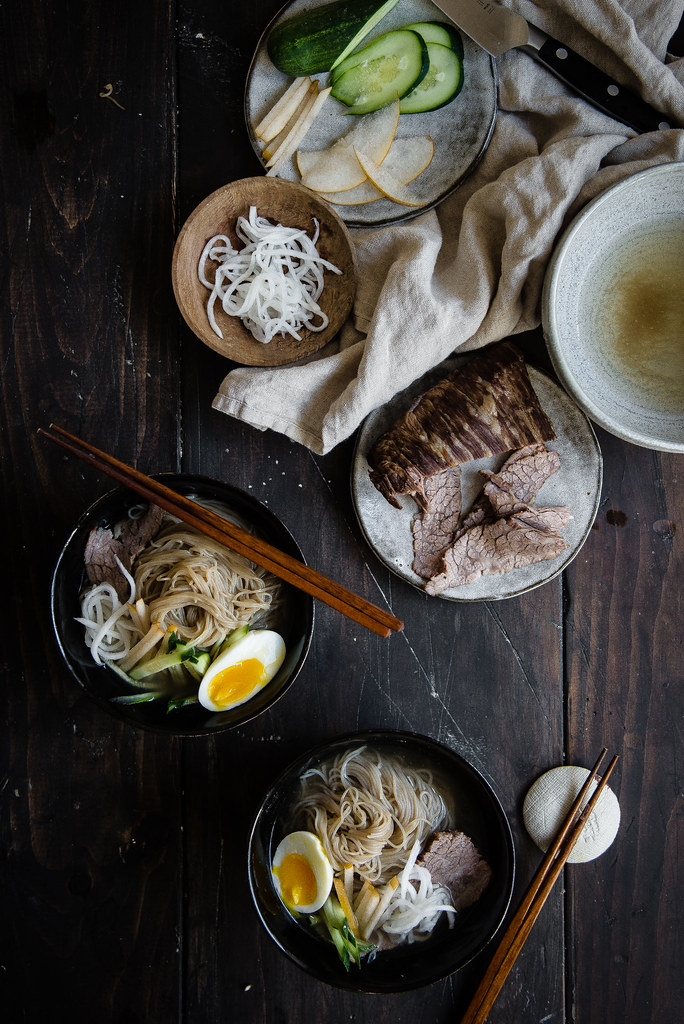 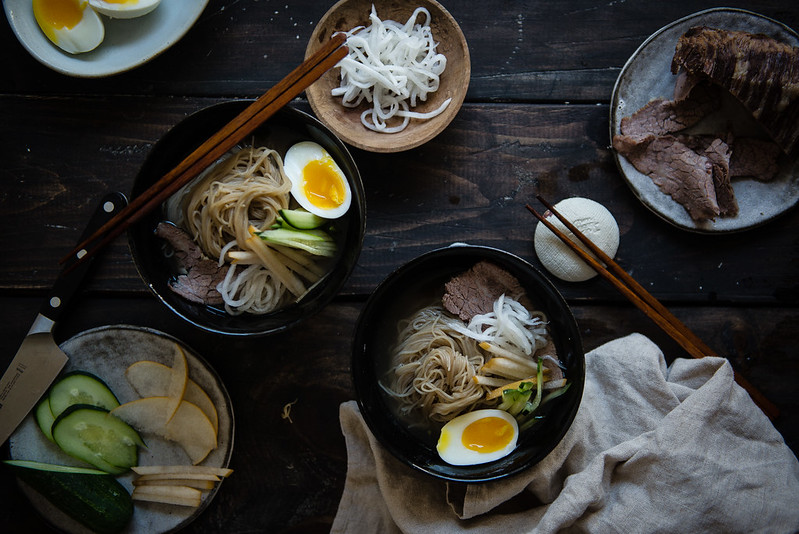 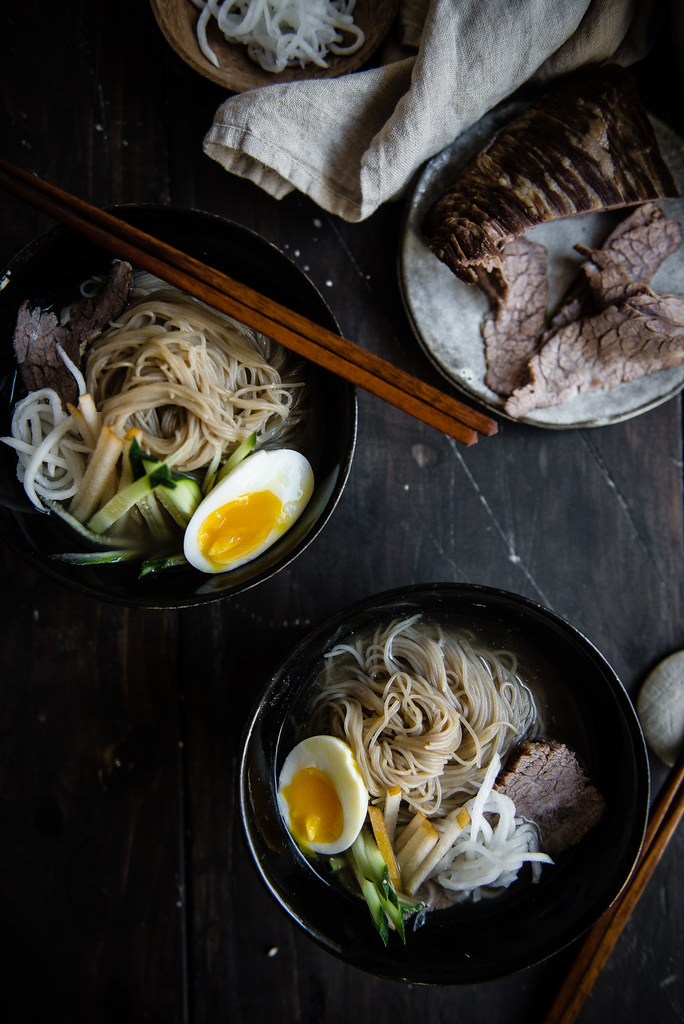 As far as summer lunches go, this is about as refreshing as it gets — slippery, chewy buckwheat noodles in an icy-cold broth that’s equal parts savory, sweet, and tangy, topped with all things crunchy and fresh, plus a creamy egg for good measure. It’s not quite as quick as this noodle lunch, but the broth is well-suited as a make-ahead meal — freeze the broth and the brisket slices ahead of time, then just prepare the toppings and noodles whenever you’re ready for the meal equivalent of a dip in the pool. It’s often served in stainless steel bowls to keep things feeling even colder and fresher, but that’s totally optional.

Dongchimi kimchi is a sweet and tangy “water kimchi” made from daikon radish. It’s a gentler, milder kimchi that doesn’t use the bright-red gochugaru pepper powder more commonly associated with kimchi. You can find it in most Korean supermarkets, either sliced or julienned — look for a variety with plenty of liquid. Or you can make your own via Maangchi!

The noodles for naengmyeon are Korean buckwheat noodles that look a bit like soba but are somewhat different in texture — Korean buckwheat noodles are usually made with some wheat flour and sweet potato starch, as well, for a springier, chewier noodle than soba. Again, you can almost always find them at Korean supermarkets (conveniently labeled “naengmyeon noodles”), or you can order them on Amazon for a higher price. (Or you can simply swap in any long noodle of your choice — I won’t tell!)

The other common way to eat these noodles is with a spicy-sweet gochujang bibim sauce, for bibim naengmyeon. I’m pumped to try my hand at that someday, but if you’re craving it now, there are plenty of recipes out there that look fantastic (like Maangchi’s!) And for something easy and similar, this bibim guksu courtesy of B2’s mom might be worth a look, too.