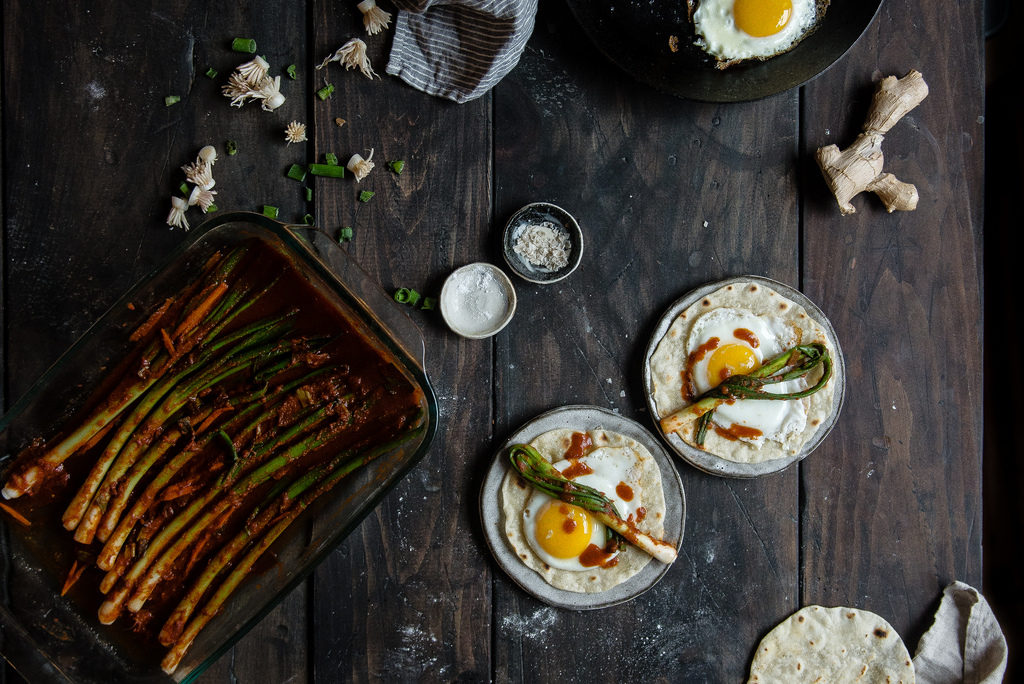 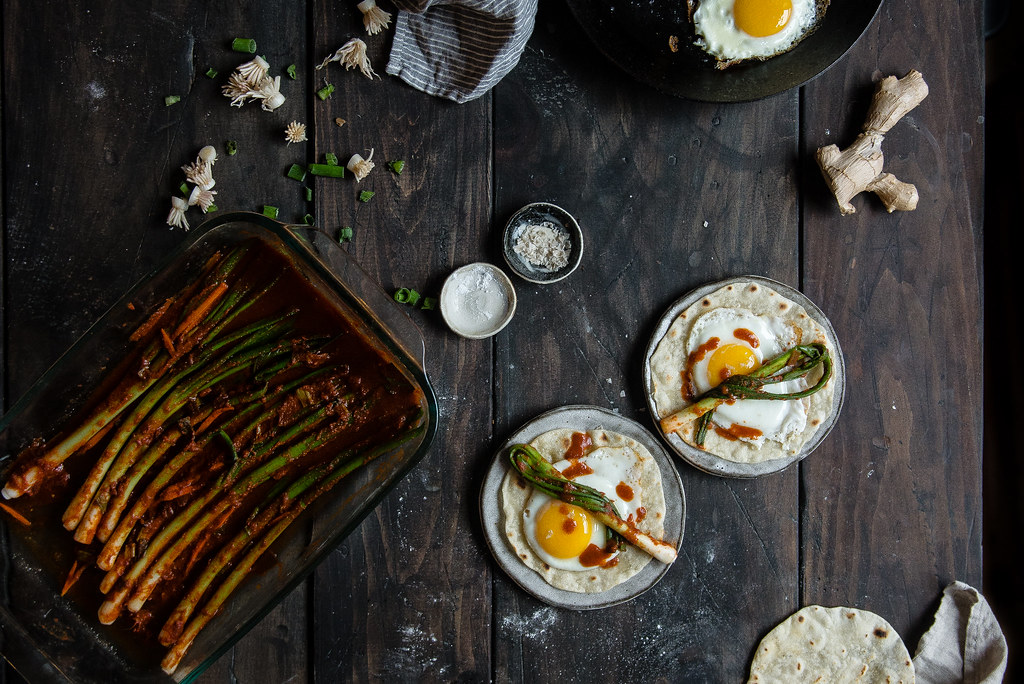 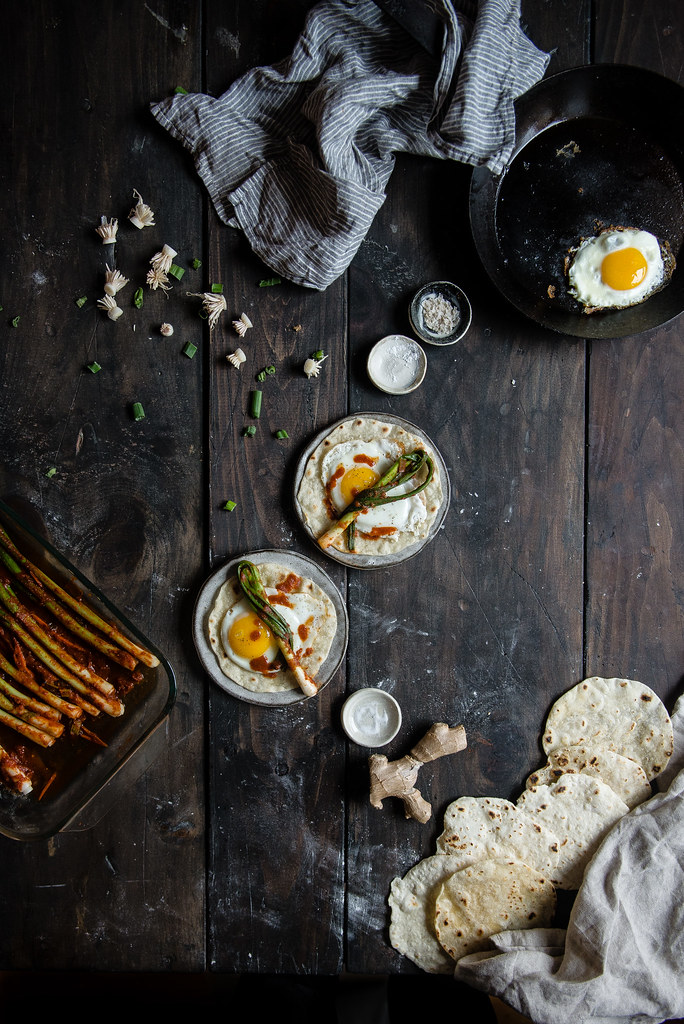 Spring is coming! It’s true, we did just spend the majority of last week’s commutes skating through pools of slush, and there are still attractively sooty mounds of snow piled in the purgatory between the cars and the sidewalk. But they’re melting so fast.  We’ve been waking up to a cacophony of long-lost birds outside our window, I’ve (tentatively) traded in my Michelin-man puffer for a wool coat for the first time in 2015.  I’ve graduated from leggings to tights under my work pants.  It’s supposed to be a high of sixty today?!  I almost didn’t type it because I feel like I might jinx it.  Spring is tiptoeing our way, and — even though I know it’ll probably desert us at least a few more times this year — I’m so excited.

These little tortillas came about after Emma posted these gems back in December and I couldn’t stop dreaming about them or the warm temperatures she wrote about.  I can’t think of anything better than her combination of crisp fried eggs and fresh, spicy vegetables over a soft tortilla for a quick breakfast or lunch on a warm day.  So when a friend of ours mentioned scallion kimchi to Bowl #2 over New Year’s and B2 lit up like a Christmas tree, I knew a kimchi version of her tortillas was exactly what I wanted to try making.  B2 was a little skeptical at first — scallion- and kimchi-lover that he is, he would have been totally okay eating the kimchi all on its own and calling it a day — but in the end, we both loved these.  Bright, lively scallions, spicy kimchi paste, buttery egg yolk and warm homemade tortillas make such a happy package, and we kept the extra tortillas and kimchi on hand to make even quicker lunches over the days afterward.  Now that spring is creeping closer and green onions are coming back in full force, I think these are perfect for an easy, flavorful lunch to usher in warmer temperatures to come.

Hope you’re having a wonderful week, and things are looking warmer where you are, too! 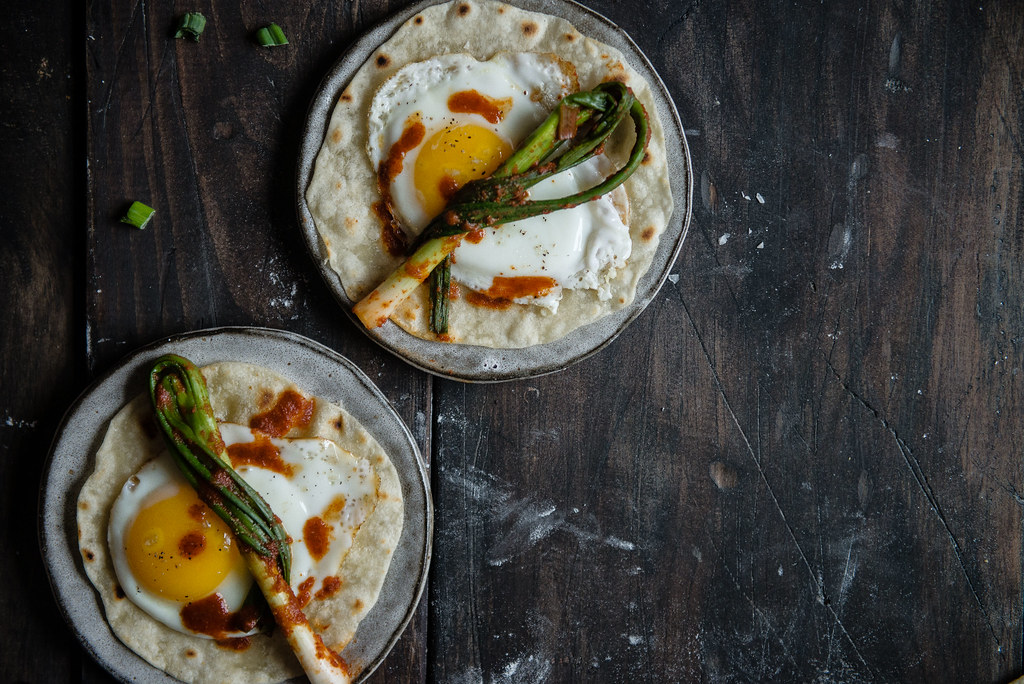 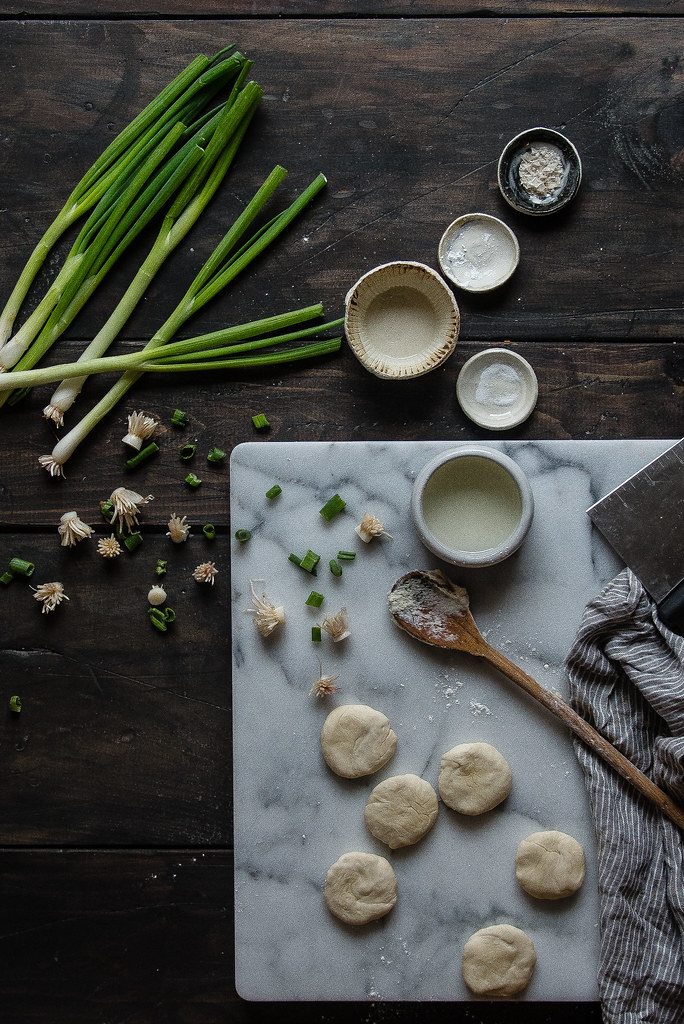 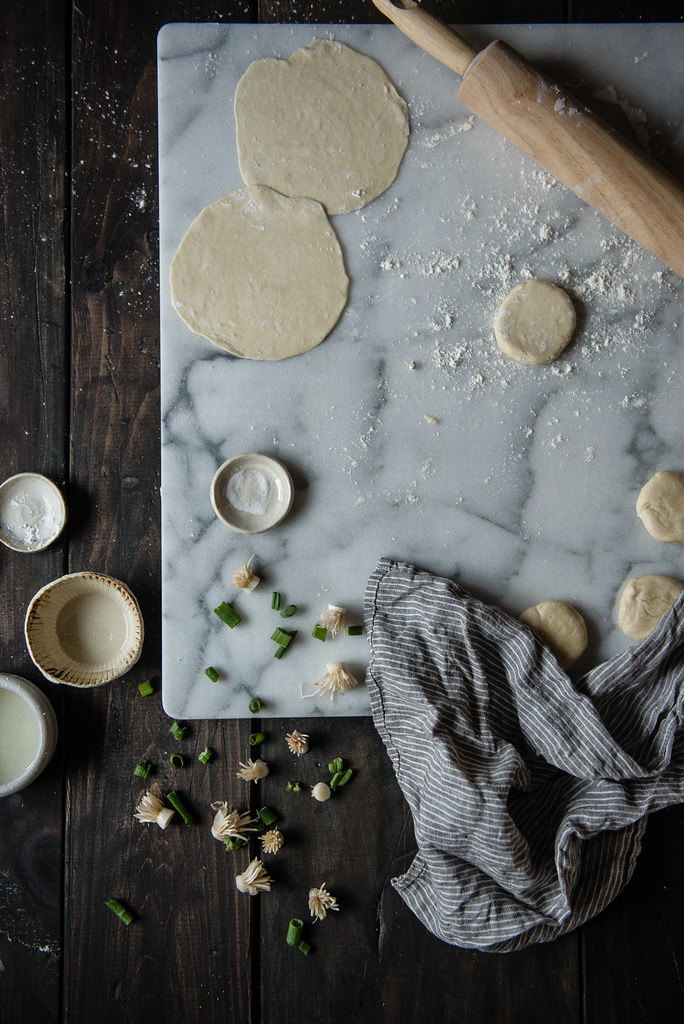 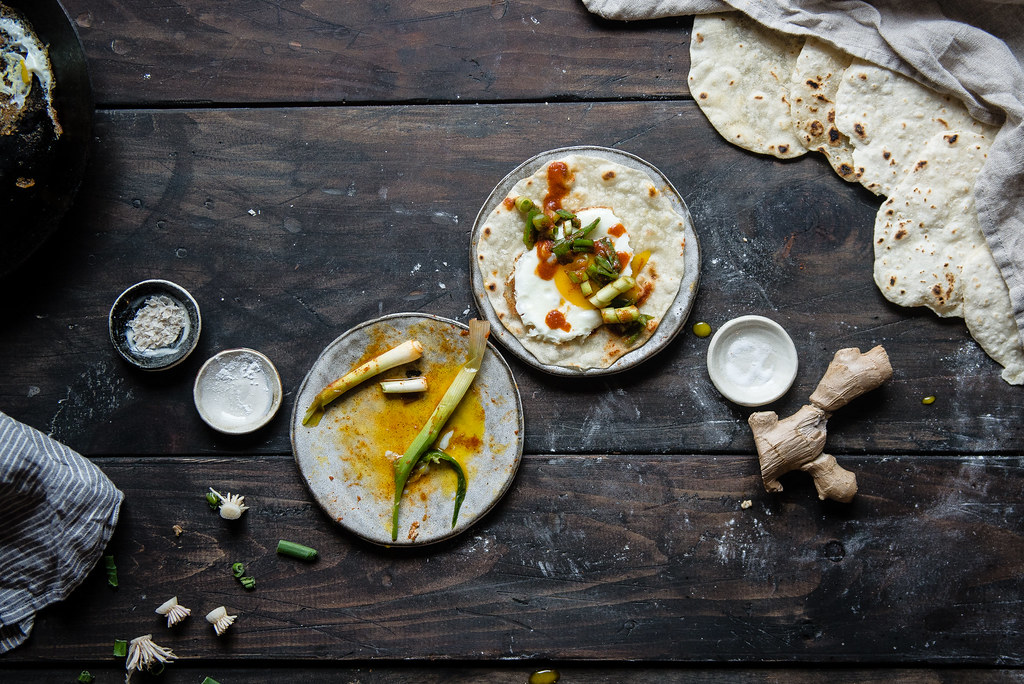 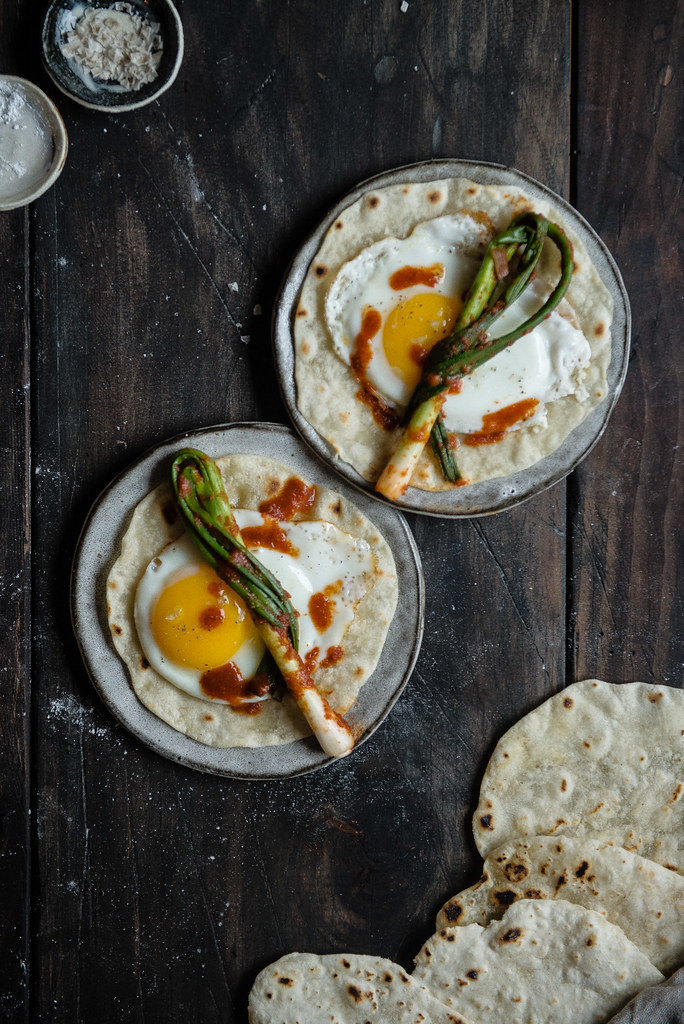 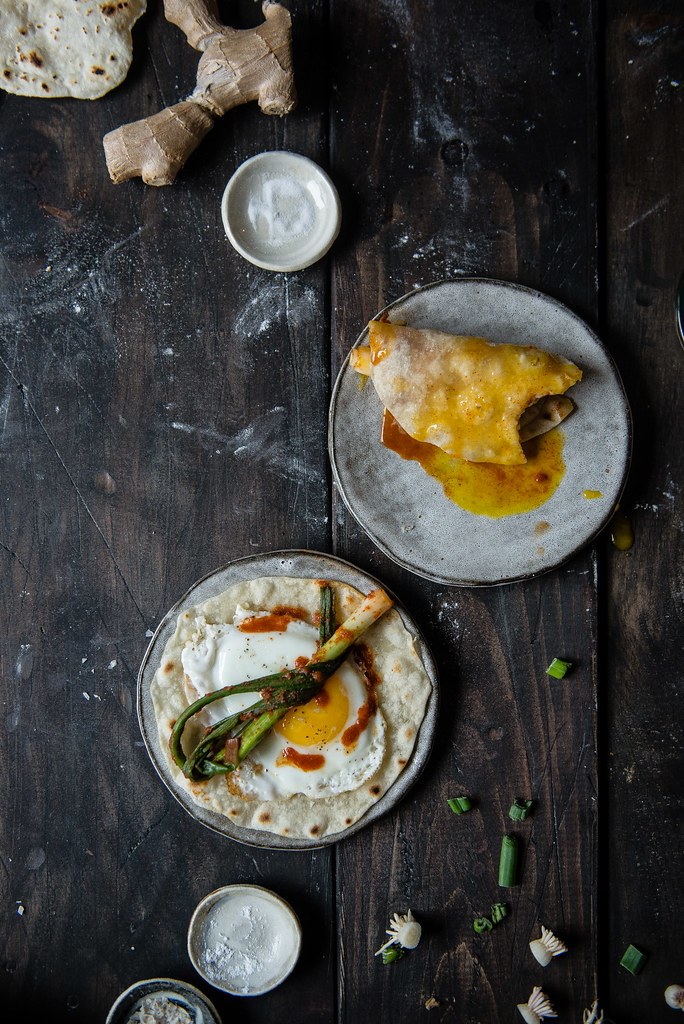 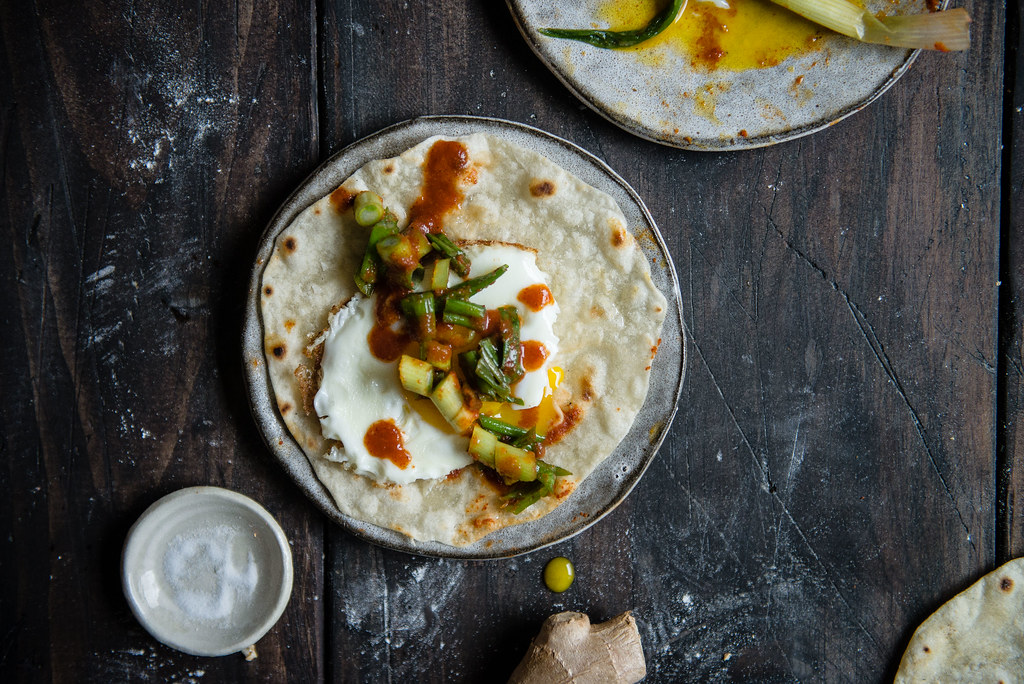 Inspired by My Darling Lemon Thyme and with help from Aeri’s Kitchen and The Cafe Sucre Farine. Extra tortillas will keep in an airtight container for several days. Kimchi will keep for at least a month and up to two or three.

This was my first time making homemade tortillas and I was totally enamored. They’re easy but so rewarding. A note on the oil in the recipe — I tried a few versions of the tortillas and found that less oil results in lighter, softer tortillas that are fluffier right out of the pan. More oil means they’ll be a little denser. At the same time, more oil will keep them softer longer — the ones with less oil didn’t reheat as well. You can adjust the oil in these by a teaspoon or so in either direction, depending on your preference.

If you don’t have sweet rice flour for the kimchi, feel free to omit it — it’s designed to help disperse the paste evenly throughout the kimchi, but the kimchi will be fine without it. You can add a few teaspoons of sugar to adjust for sweetness, if you like.

Also, the photos above show grated carrots in the kimchi — they’re there because I used leftover marinade from a batch of regular kimchi (recipe here). Feel free to add it if you like!