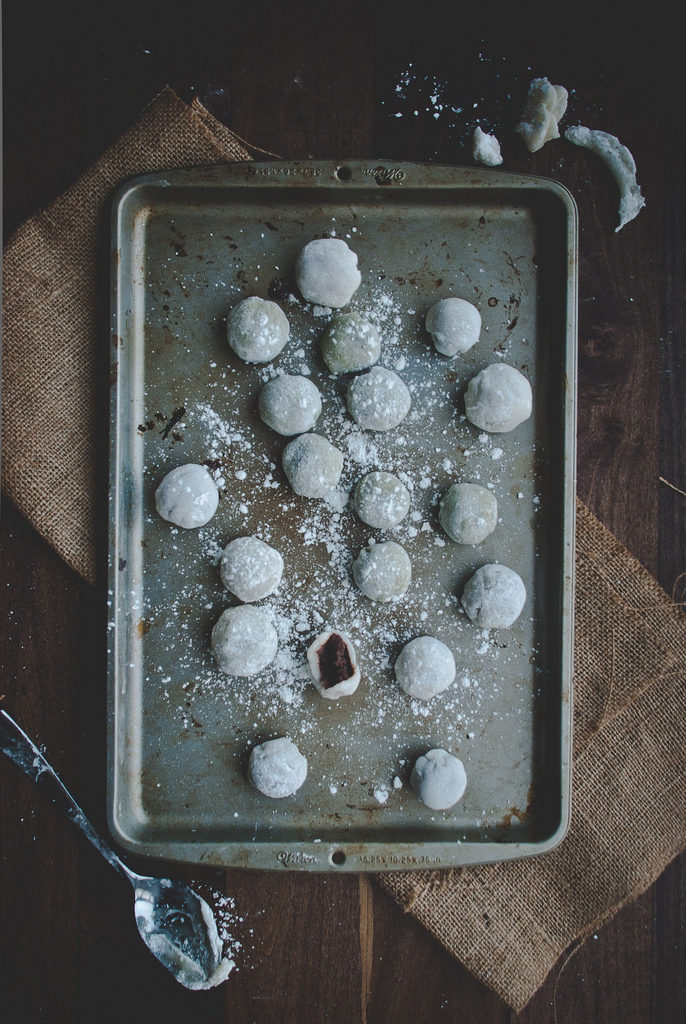 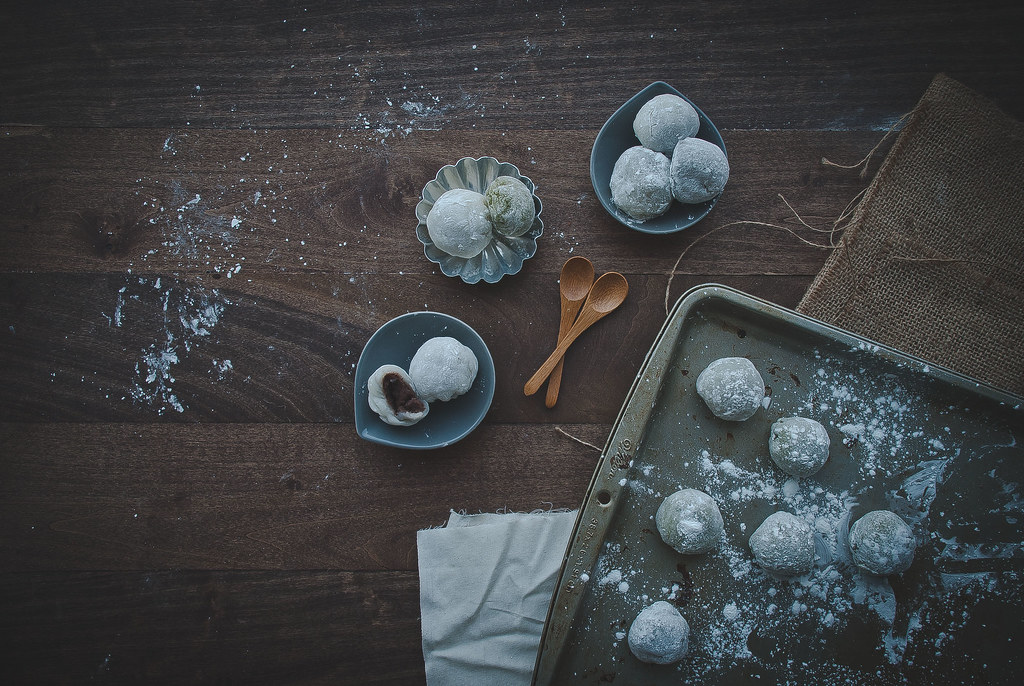 Normally, I’m all about the Super Bowl finger foods.  Carbs wrapped in cheese wrapped in carbs, usually mini, often involving some combination of “Panko-crusted” and “stuffed” and “pizza”? It is my thing.  (Football, not so much.)  But, either because Bowl #2 and I both had somewhat hectic weeks, or just because January has felt very long and very January, I just felt like a gentler, quieter dessert was in order.  One that you can stuff yourself full of and just feel comforted, instead of immobilized.  And maybe that you ate two days’ worth of calories in 30 minutes… instead of four.  So I made these red bean mochi balls.  (I know, even though I just made these.  Does that mean it’s topical?  Sorry for being a one-note these days — I promise I’m moving on to non-mochi edibles and potables after this.) 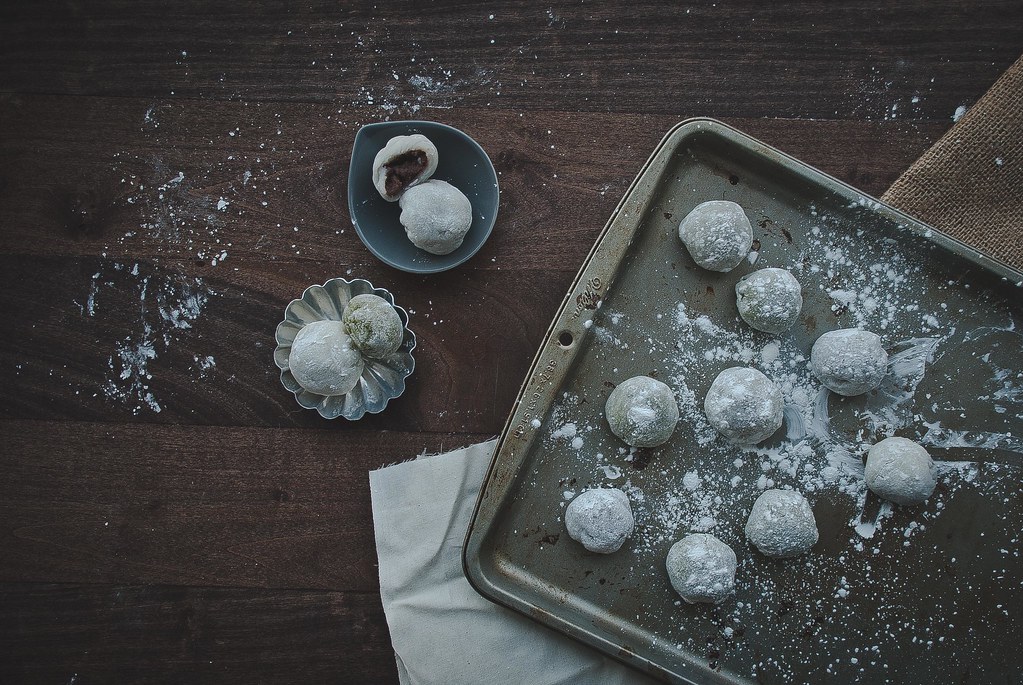 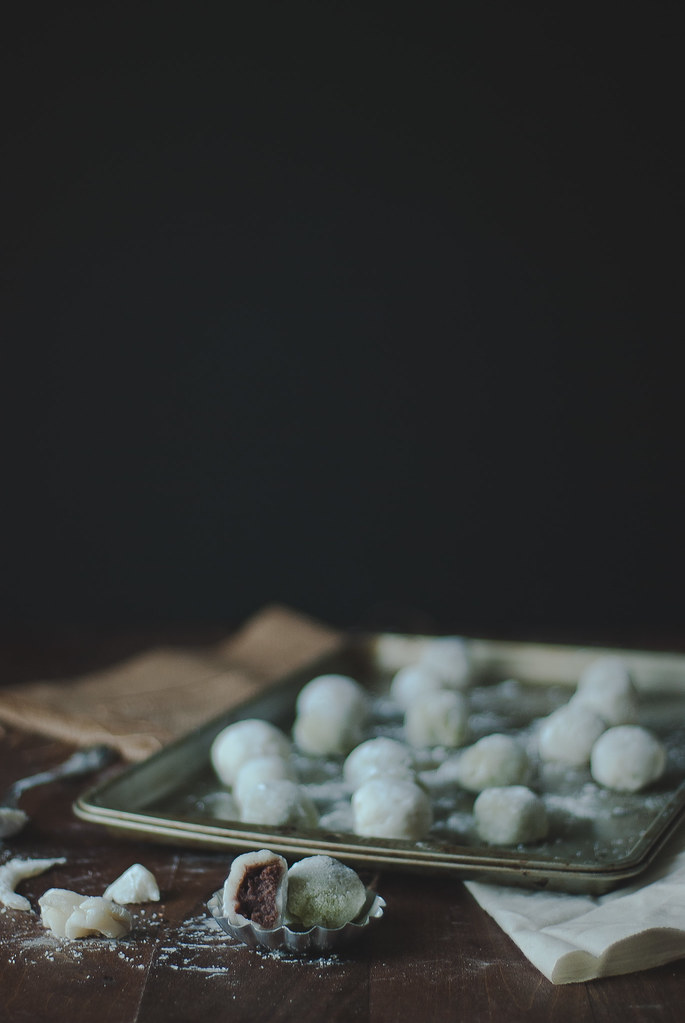 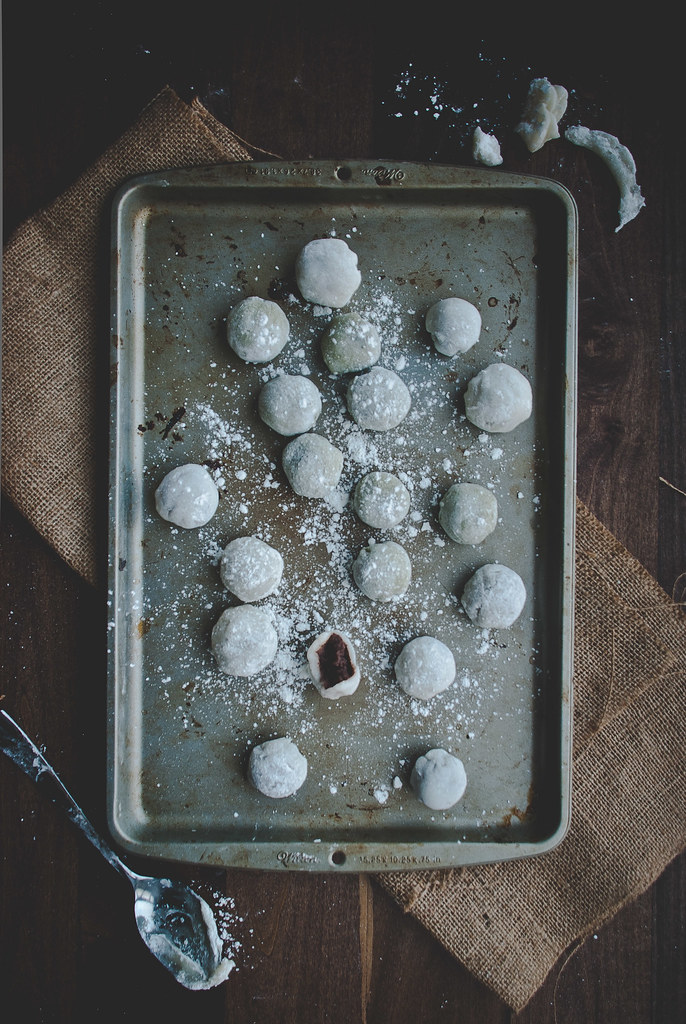 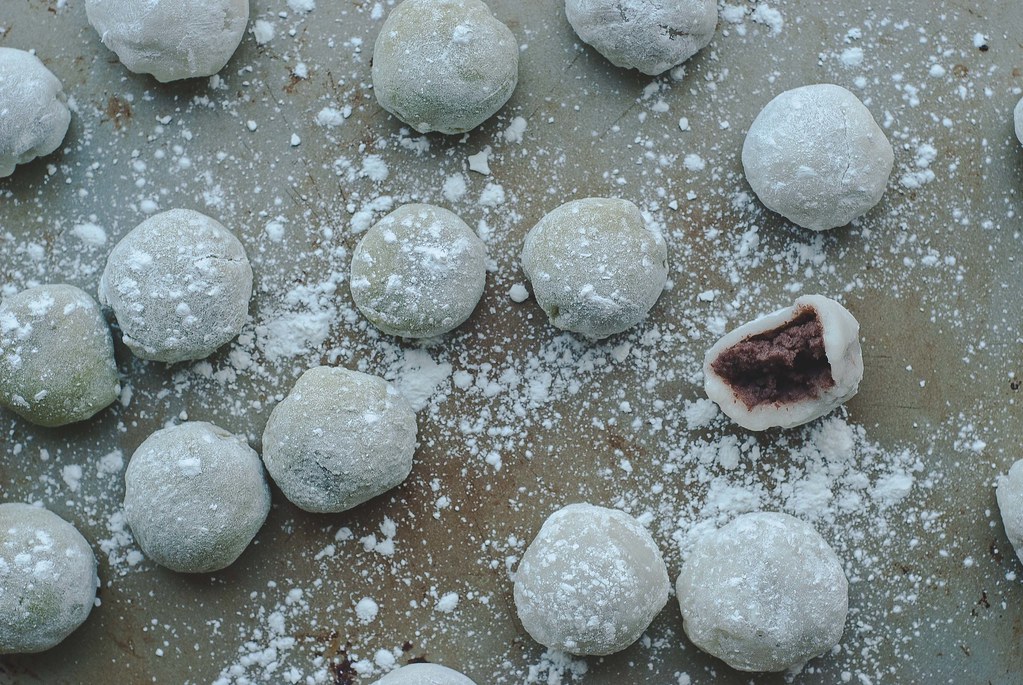 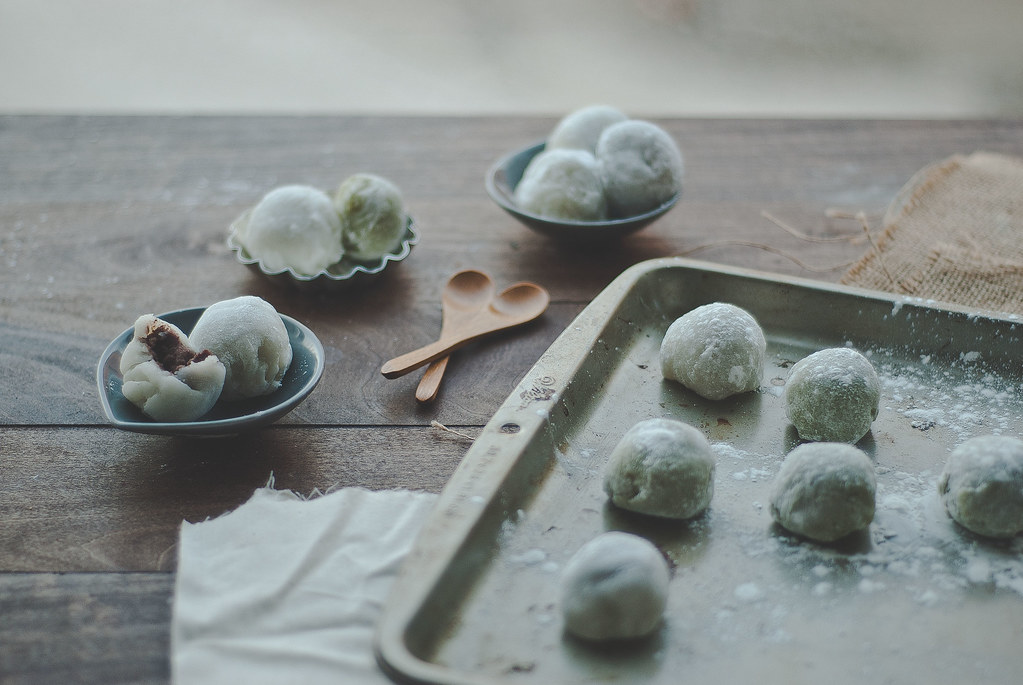 Out of curiosity, I tried a few different methods for the mochi wrappers. The first was just baking it as per the recipe I posted last week, but in two separate pans so that the layer would be thinner, and for less time (about 35-40 minutes).  The second was the method I’ve seen almost universally for mochi balls elsewhere — by microwaving the mochi on high for a few minutes, giving it a stir, and going to town with it.  Maangchi and use real butter both post great tutorials and recipes for this  method.  And last, just because I was curious whether you could do the microwave method by steaming the mochi instead of microwaving, I used that recipe, but baked it in a bowl covered in the oven at 350 degrees for 15 minutes, then stirred and prepared it as per the rest of the instructions.

My findings were that all more or less work.  Mochi is just that agreeable!  More specifically, though: (1) The coconut milk (baked)recipe: Taste-wise, the best. Texture-wise, perhaps the worst.  Because it contains almost twice the amount of liquid that the other recipes do, it’s very soft, so wrapped around red bean filling, it tastes more like a Chinese red bean soup dumpling (tangyuan) than the mochi balls I’ve had from the store.  It was also the most difficult to get the mochi to hold its shape around the red bean filling.  (2) The microwave recipe: Taste-wise, the worst.  Texture-wise, the best, and prep-wise, the ease of prep was unbeatable. That stuff comes together in literally 5 minutes. Literally. Two, if you’re fast. (3) And the steamed version was somewhere in between — likely the easiest to work with, but softer in texture than the microwaved version (which may be preferable, the microwave version could be a bit too tough/chewy for some folks) and still lacking in taste compared to the regular coconut milk version.

So for ease of preparation alone, I’d probably go with the microwave method, unless you don’t have a microwave, in which case, feel free to experiment between baking on low heat for a long period of time or steaming on high heat for shorter.  (I’m also curious as to what would happen if you prepared the microwave recipe with half coconut milk and half water?  I didn’t test enough after all! Drat!)

Lastly, note that my recipe is for half green tea mochi and half plain — combine the two sets of ingredients for mochi below if you just want to make one batch (and double the matcha powder if you want all green tea).  And in terms of time, the red bean filling will need overnight prep (soaking the beans) and several hours to come together, as well as an additional few hours for freezing if you want the red bean balls to be easier to work with when wrapping them.  Enjoy. 🙂 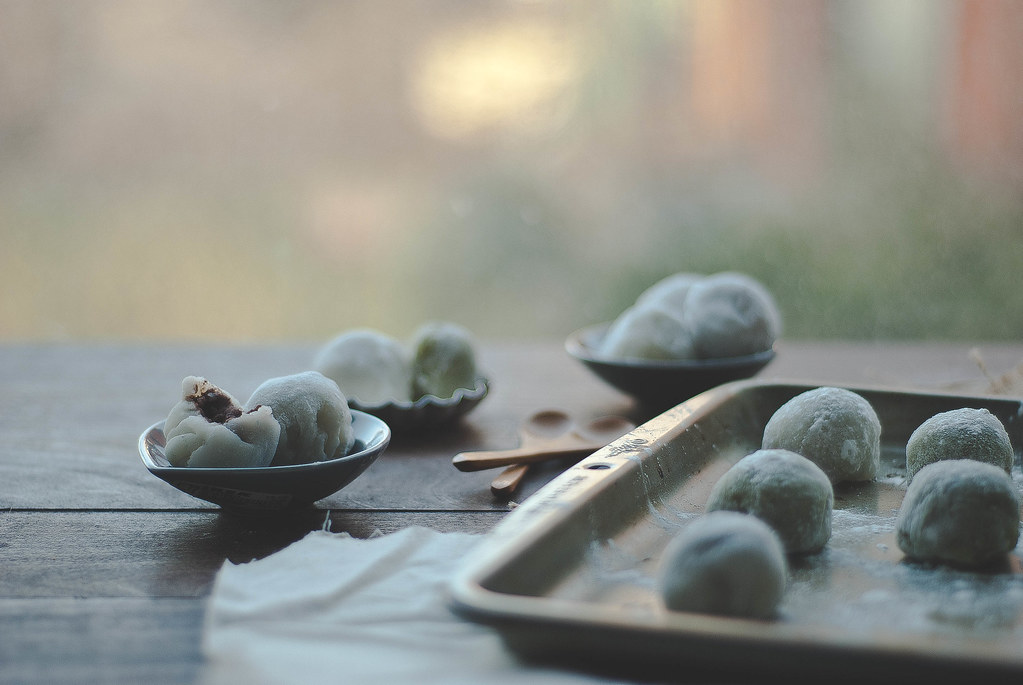 Mochi wrapper recipe more or less identical to recipes by Maangchi and use real butter (see their posts for step-by-step tutorials!) I divided the recipe into two halves for one batch each of green tea mochi and plain mochi — to make just one large batch, follow their recipes instead.

For the red bean paste, you can choose to strain out the biggest pieces of bean skin if you want to. Do so by pushing the mixture through a fine mesh strainer. I did one batch straining the skin and one batch with skin intact — the taste difference was negligible, if discernible at all.

For mochi ice cream, omit the red bean paste and use ice cream balls instead! Scoop ice cream into 1-tbsp balls and space evenly on a baking sheet. Replace in freezer and let chill until hard. Use in place of the red bean paste balls. Return to freezer after forming the mochi balls or enjoy immediately!