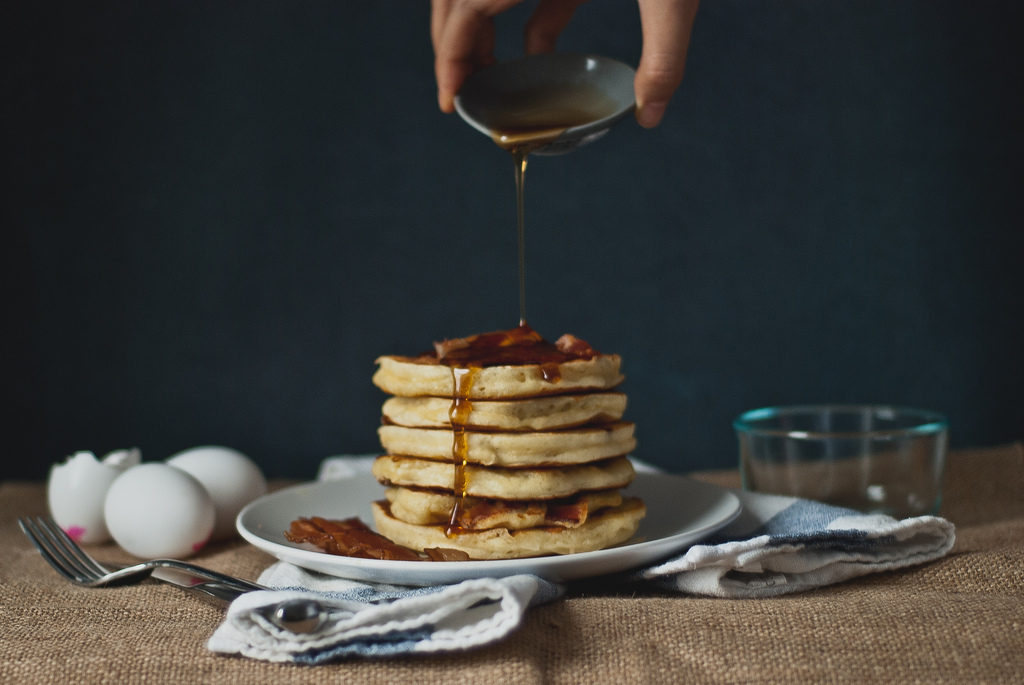 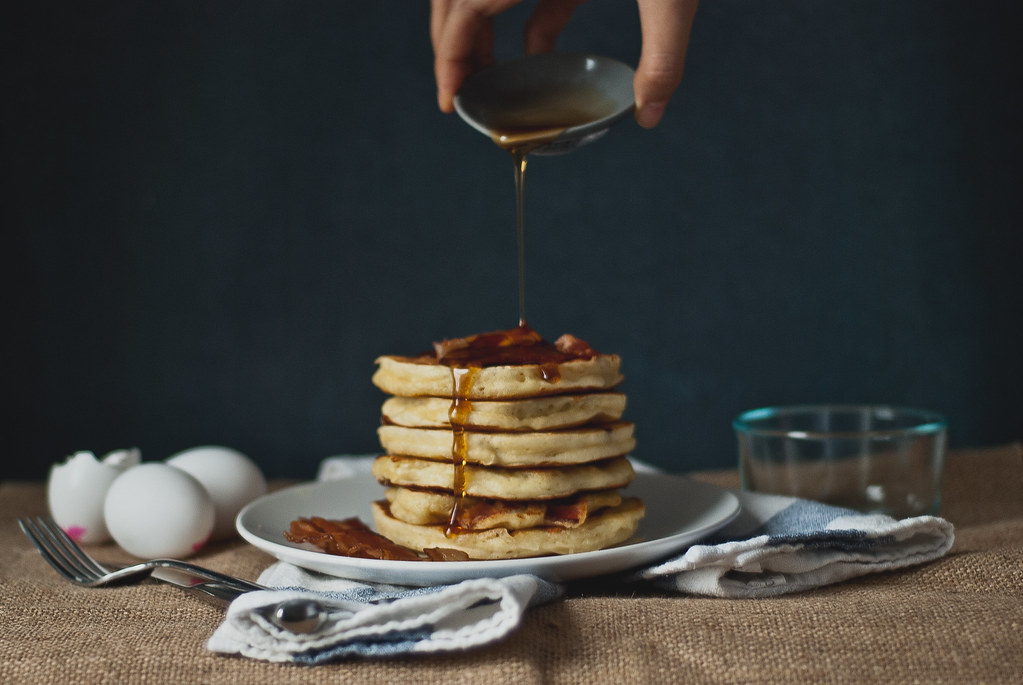 I’ve grown up eating savory-sweet food all my life. I thought it was just a quirk of my mother’s to add sugar to everything until I looked up Shanghainese cuisine on Wikipedia a few years ago and found that, evidently, it’s a Shanghai thing. Nowadays, I follow exactly in my mom’s footsteps and add a bit (or a lot) of sugar to almost everything I make — pasta sauces, soy sauce glazes, stews, whatever. I drench my sausage links in maple syrup. (One of my earliest memories is dunking sausage links in maple syrup at Bob Evans. What an underrated restaurant. Did anyone else have family dinners there?)

But the advent of adding savory to sweet only came upon me recently — mainly in the addition of bacon. To everything. Most recently, chocolate chip cookies and pancakes. I can understand feeling squeamish about bacon in chocolate chip cookies — but in pancakes? The bacon’s usually right next to them anyway. It’s only right. It just makes life easier. And infinitely more delicious.

For these, I just used the same go-to “buttermilk” pancake base that I got from Joy the Baker. I’ve never looked back since trying it — it’s fluffy, pillowy-soft but substantial, and it gives your local diner’s version a run for its money. I put buttermilk in quotes because I’ve never actually used buttermilk in it — I always use a mix of half Greek yogurt and half milk (any kind, almond, soy, or regular) and it’s never steered me wrong. I don’t think you’d ever guess it wasn’t buttermilk pancakes straight from IHOP or your favorite diner.

And then I added bacon! 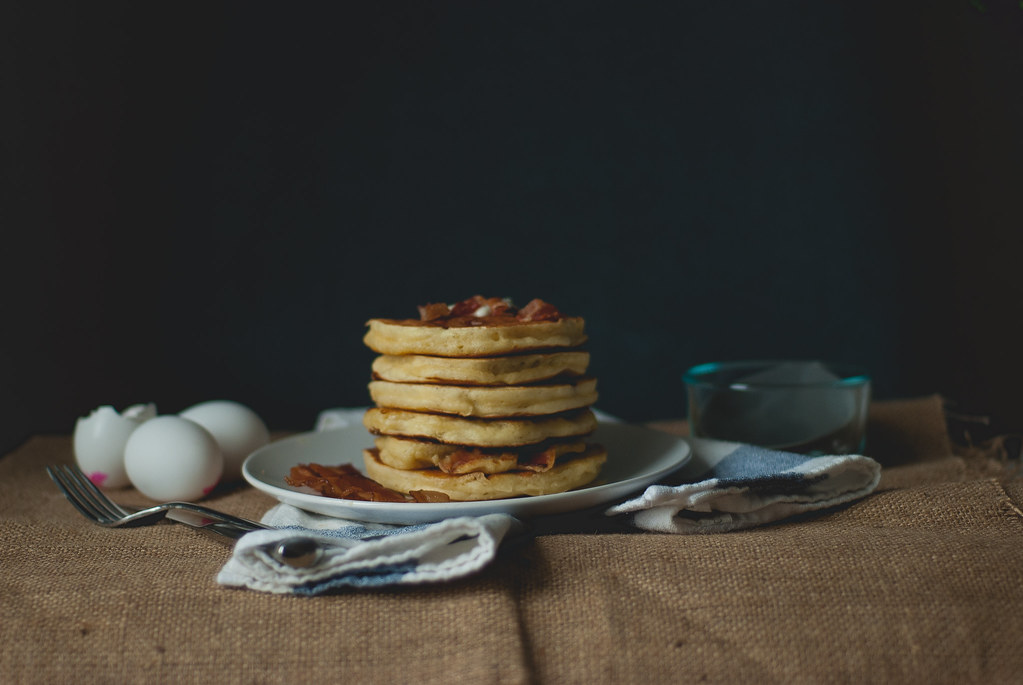 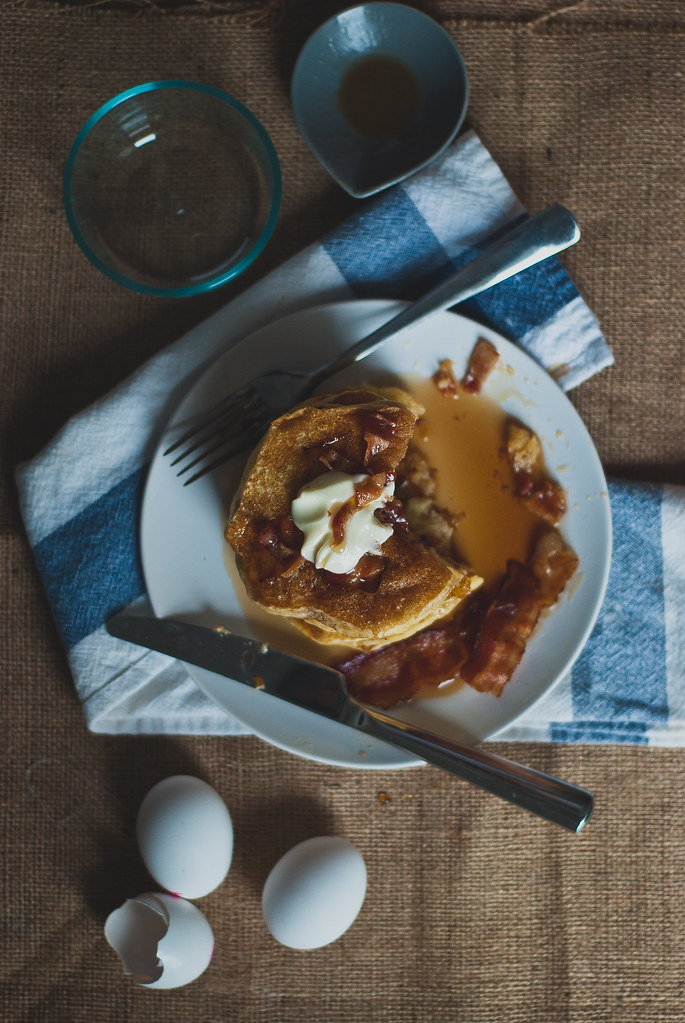 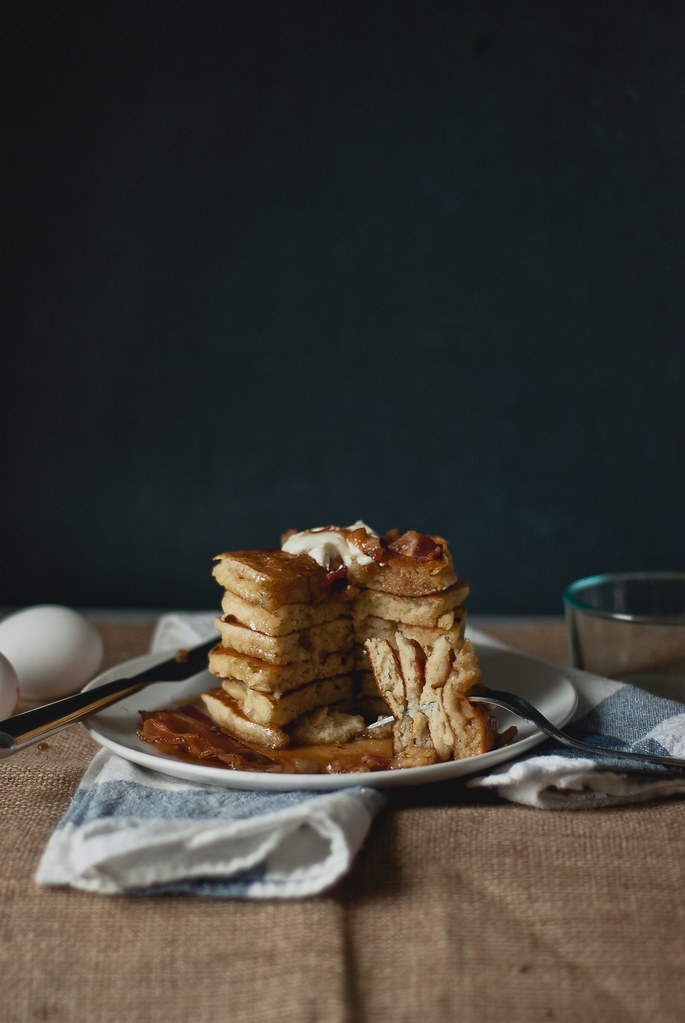 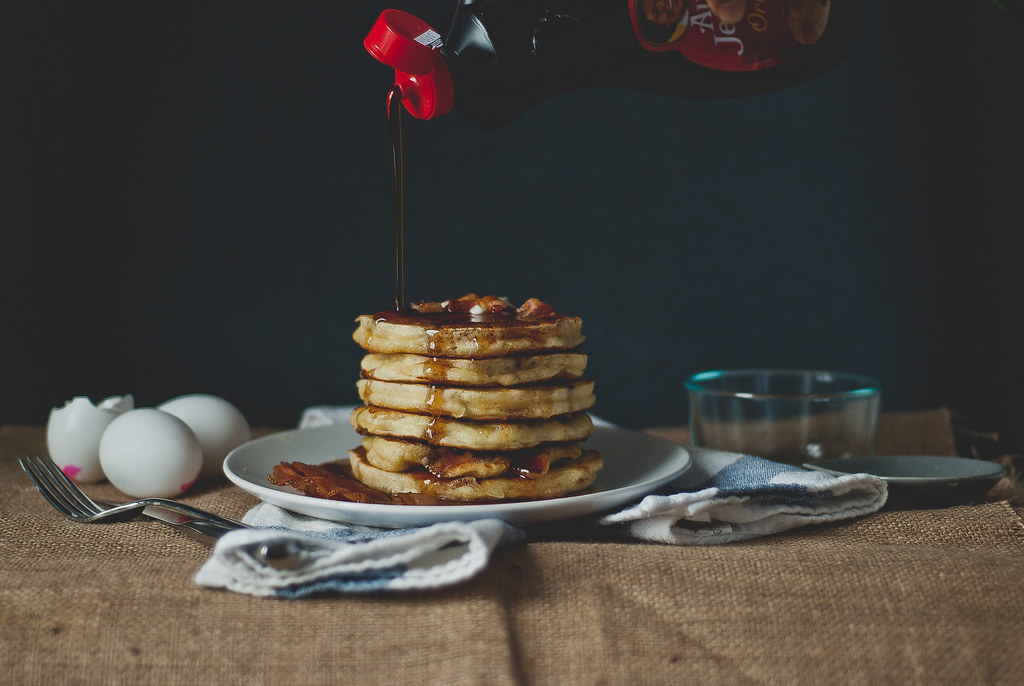 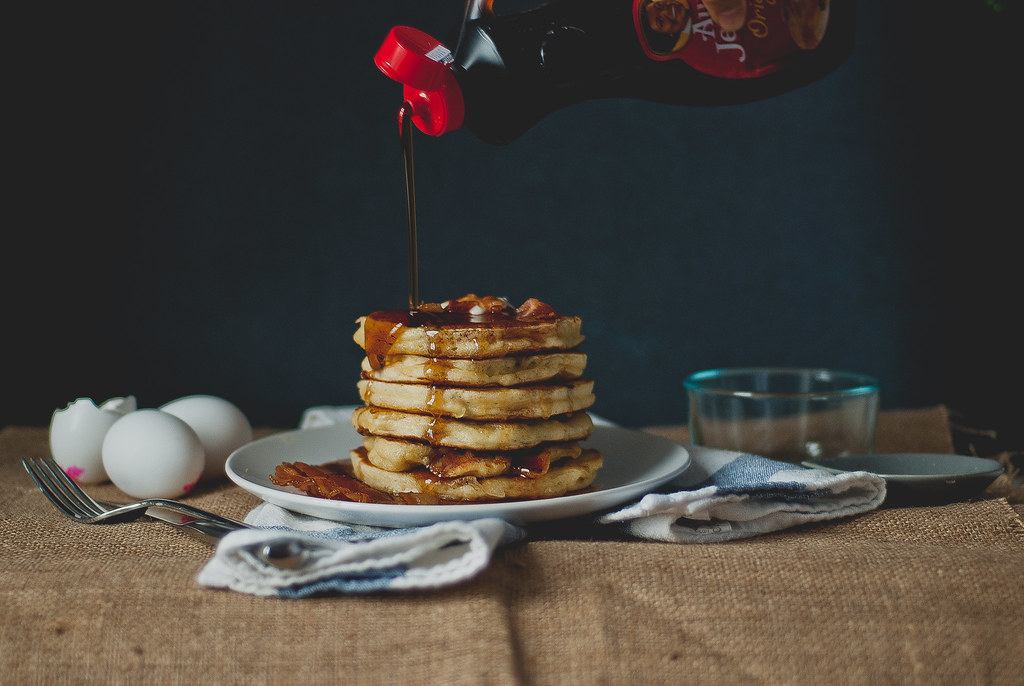 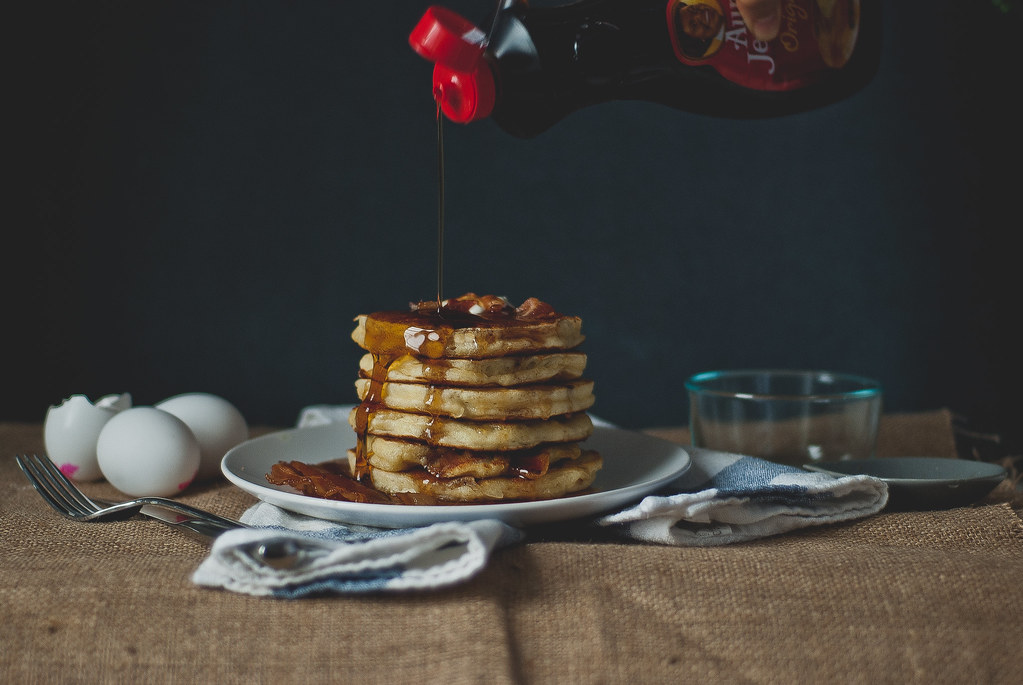 So. Good. (Oh yeah, and that’s me deciding that ramekin of maple syrup wasn’t enough and getting serious with the Aunt Jemima.)  Edit: Since a lot of you don’t like savory and sweet together — totally understandable — I just wanted to add that this pancake base is phenomenal with pretty much anything.  Slices of banana, blueberries, Reese’s Pieces (!), or, if you’re feeling super decadent, instant espresso, chocolate chips, and Nutella.  My personal favorite after bacon might be Reese’s Pieces — seriously awesome.  And I never find I need syrup with those, so it might balance out to be better for you?!  Relatively.

This is what we’re having for Christmas morning this year — hope you have something equally comforting and cozy lined up, too. And if not, try this. 😉 Merry Christmas, friends! 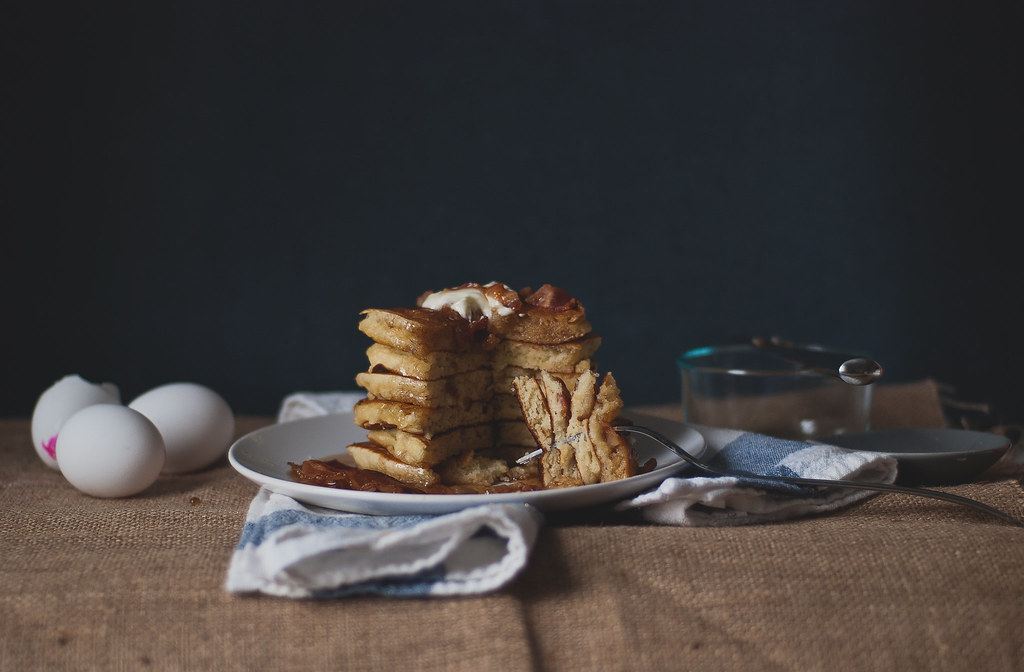 based on Joy the Baker’s buttermilk pancakes.

The batter will be quite thick. If you want it to be pourable, add one or two more tablespoons of milk — otherwise, simply press the batter with your measuring cup right after pouring into the pan to form a circle shape.