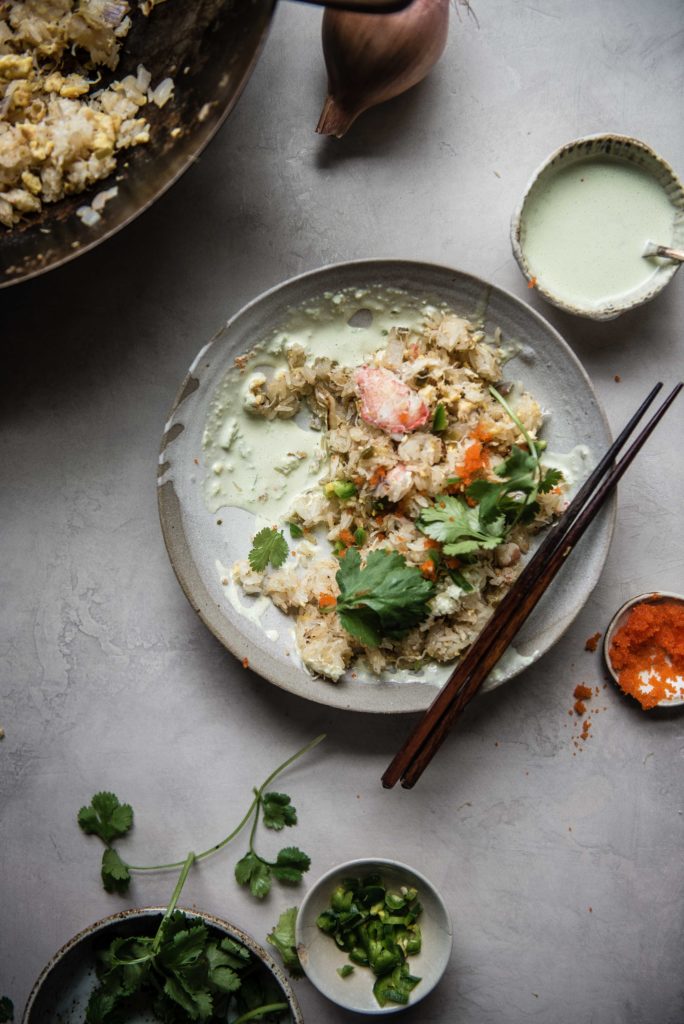 My commute here in LA is almost the same as it was in New York, 40 minutes give or take. The only difference is that I sit my butt in a little Corolla instead of the blue-benched 4/5, and so I can no longer do either of the two things I used to do on my commutes in New York — sleep, or read, but mostly sleep — because I would die. For exactly 3 days I filled this void in my travels to-and-fro with music from my own playlists, before I got tired of my apparently very limited musical taste, and then for a few more weeks it was music on the radio, before I got tired of their slightly less limited ones. So now I’m at a happy medium of NPR (I have officially become my dad) and the wonderful world of podcasts.

Here B2 wins, because I used to say I didn’t care for podcasts, even though everyone and their mom has been telling me to listen to them for years. He laughed at me and said, “That’s like saying you don’t like movies. You just need to find one you like.” For some reason, with a few exceptions here and there, I just didn’t think they were my thing! (Not even Serial. Yep. I said it.) But as usual, B2 was right — and as with most every aspect of life, it just needed to involve food. As it turns out, when food podcasts treat my ears to the actual delicious sizzling of someone making the most amazing-sounding (literally) crab fried rice to pass the time while I inch along in traffic, all bets are off. 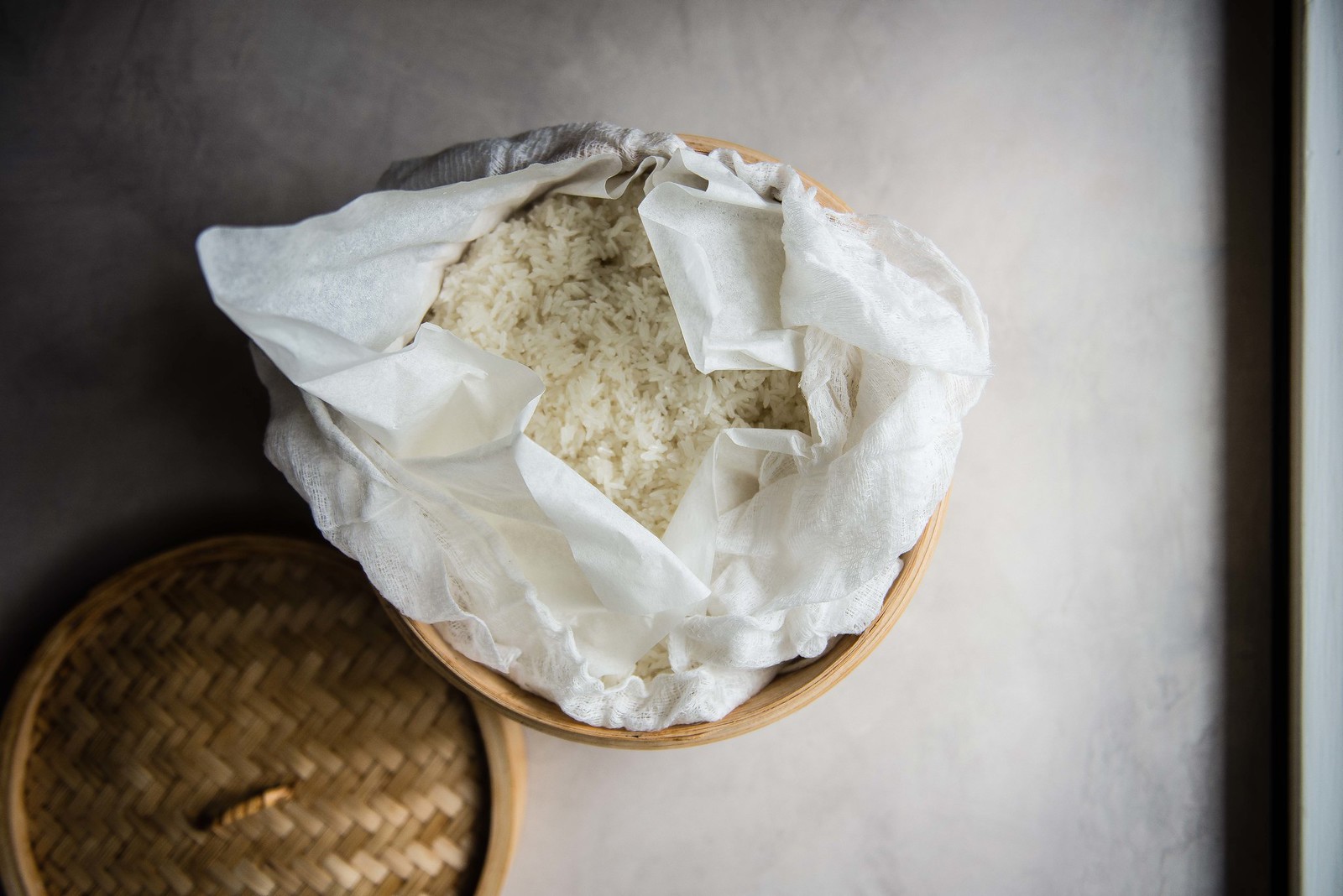 This is just what happened a few weeks ago — Francis Lam and Dale Talde made crab fried rice on The Splendid Table (yes, it appears that even when I don’t listen to NPR I listen to NPR) and it sounded so good that when I got home I zero percent wanted whatever it was that we planned to eat for dinner and one hundred percent wanted this instead. Celery, shallots, and pickled jalapeños are sweated in popping oil over high heat until fragrant, followed by eggs quick-scrambled right into them, fluffy white rice, and tender, feathery crab meat. It’s finished with briny tobiko and bright cilantro, and drizzled with a pastel green aioli, whizzed with jalapeño and fish sauce until simultaneously spicy and funky-savory.

In my own kitchen, I swapped out the regular rice for sticky long-grain rice, after a totally bewitching crab sticky rice I had years ago at a sky-high restaurant in Tsim Sha Tsui, and an equally delicious fried sticky rice I had much more recently at dim sum in Alhambra. Sticky rice, when fried up, is not so much sticky as it is wonderfully chewy, a lip-smacking texture that leaves all memories of dreaded soggy fried rice in the dust, and it absorbs the savory flavors it’s fried in with such readiness that it makes you wonder if there’s any reason to ever use any other rice. (That it requires a lengthy soak and more than just my rice cooker, though, are two.) With the smoky wok hei from frying all your aromatics on high heat, a little bit of cooking wine to accentuate it, the pickled jalapeños and the fresh crab meat, this fried rice (which I made with a lazy mayonnaise — mayo-lazy? — aioli) is by turns smoky and deeply savory, creamy and pungent, laced with a brow-sweating heat and completely addictive. It’s the best thing that could possibly come out of a work commute — other than getting home, of course.

P.S. Any favorite podcasts you especially like and you think I should listen to? Tell me! 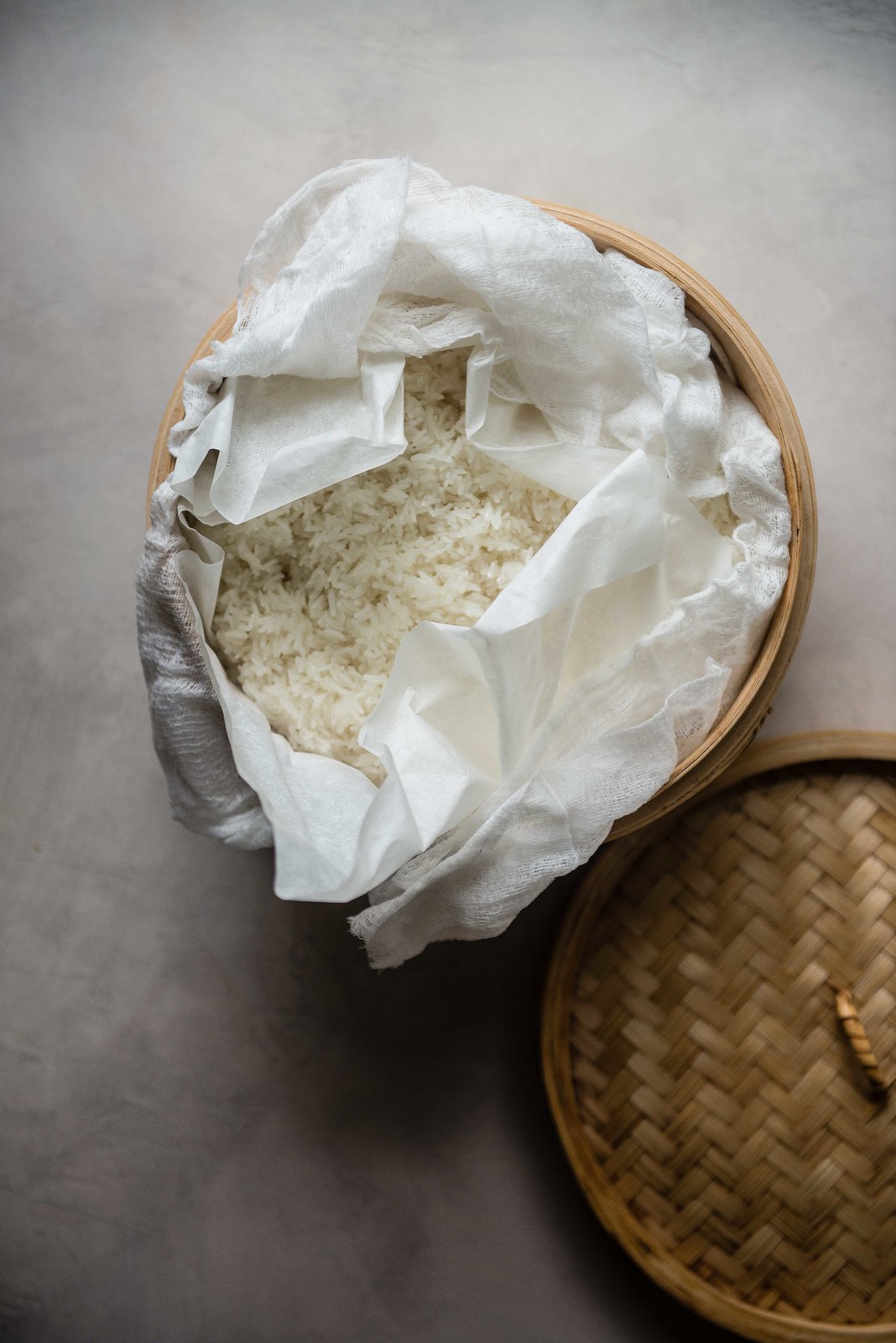 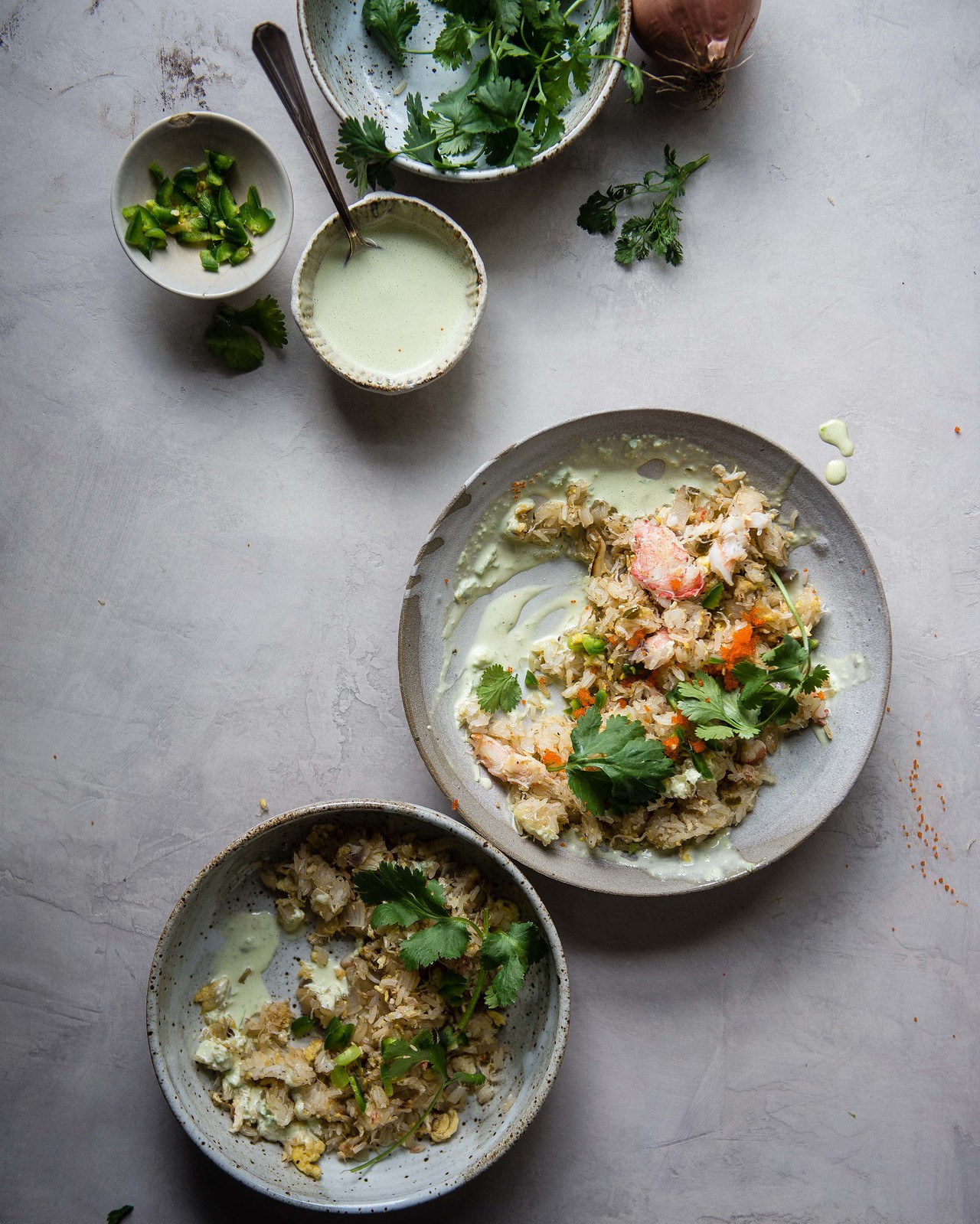 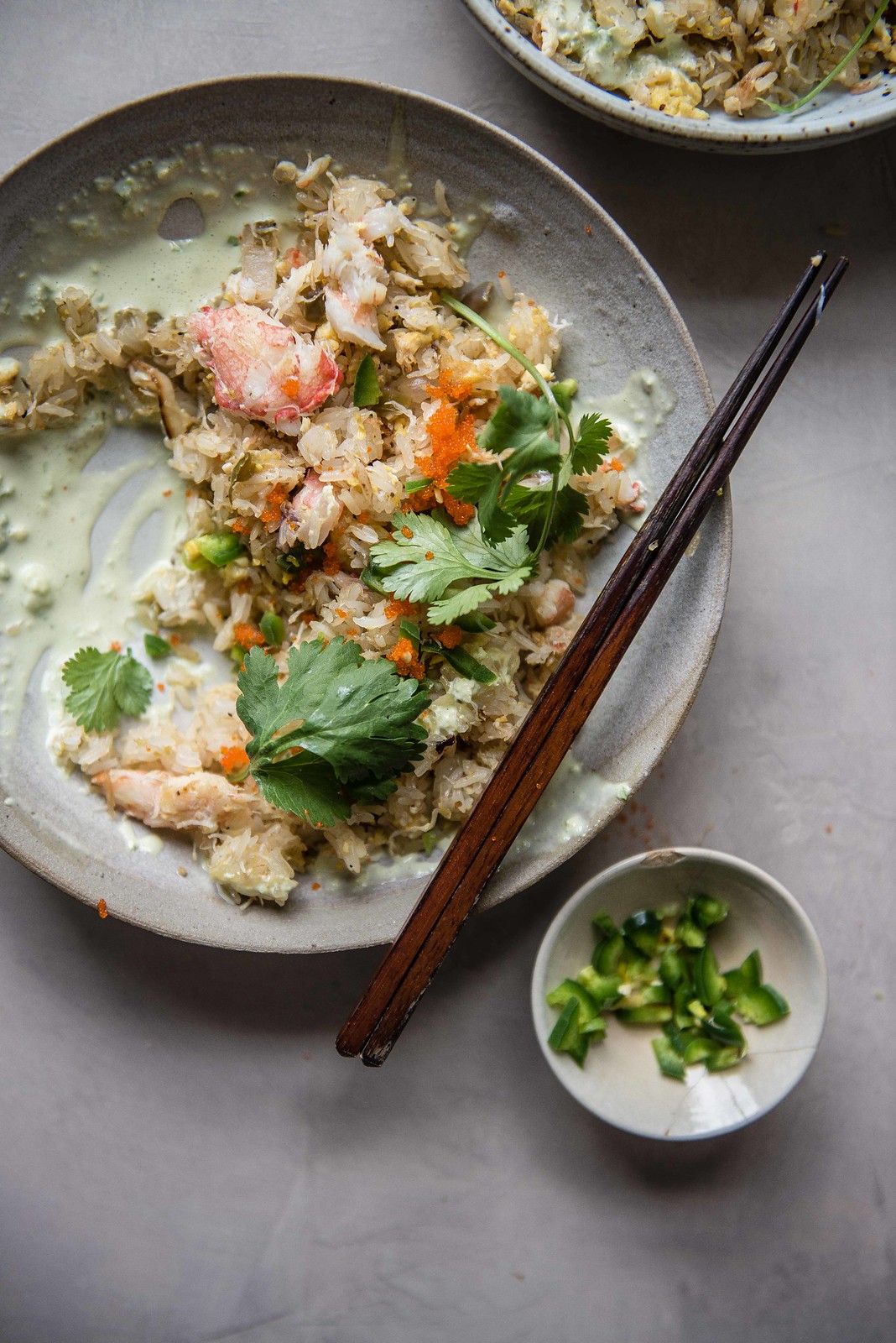 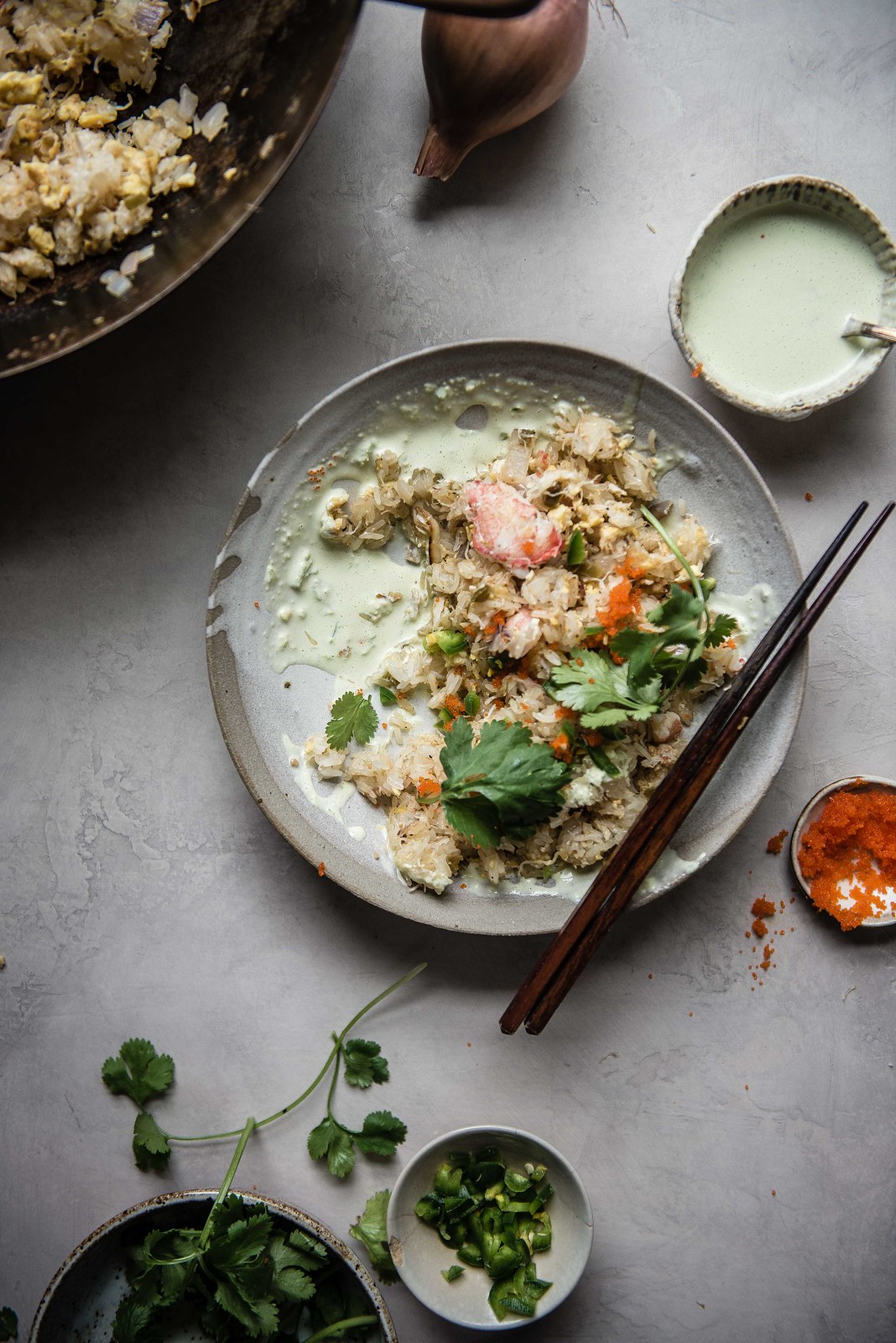 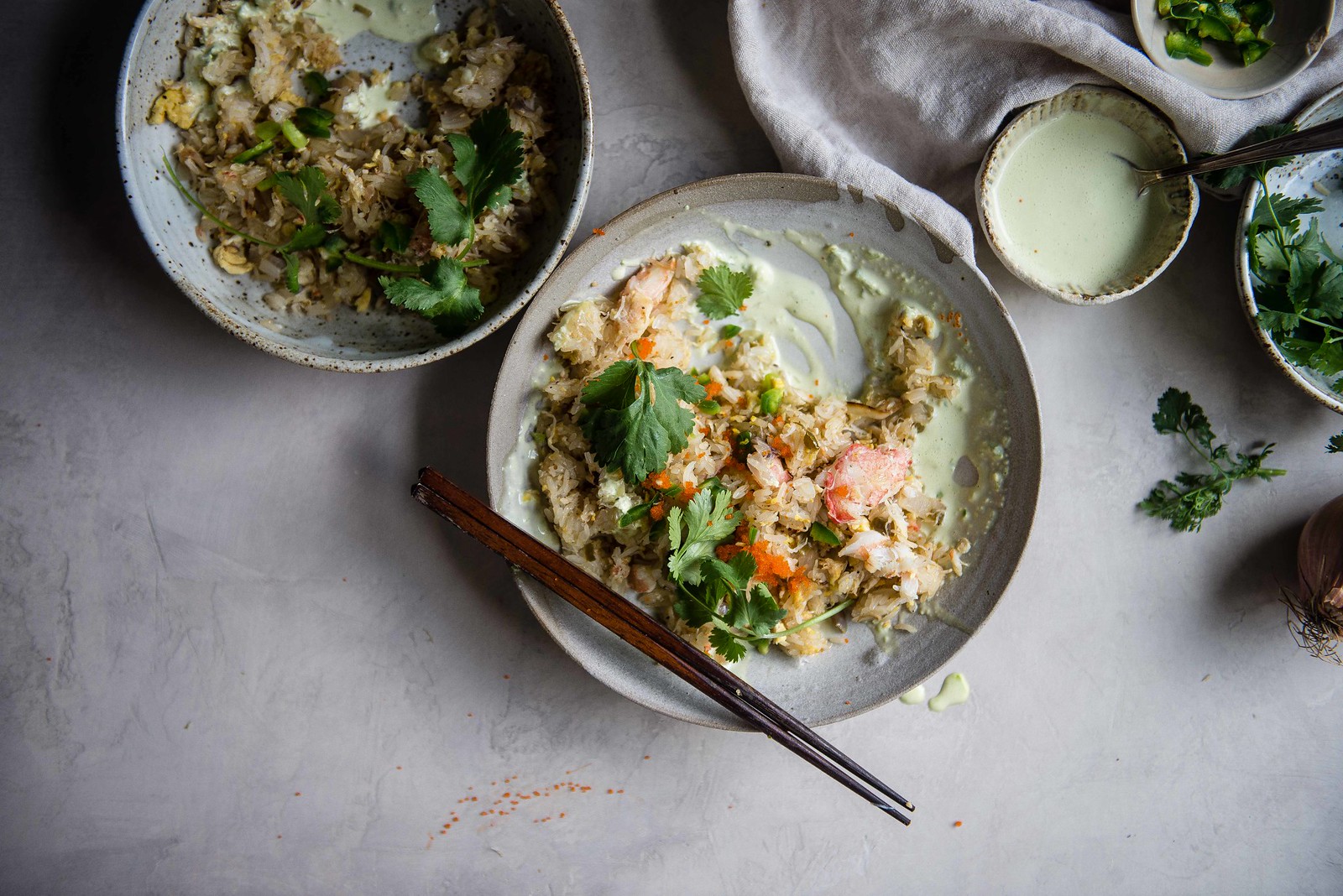 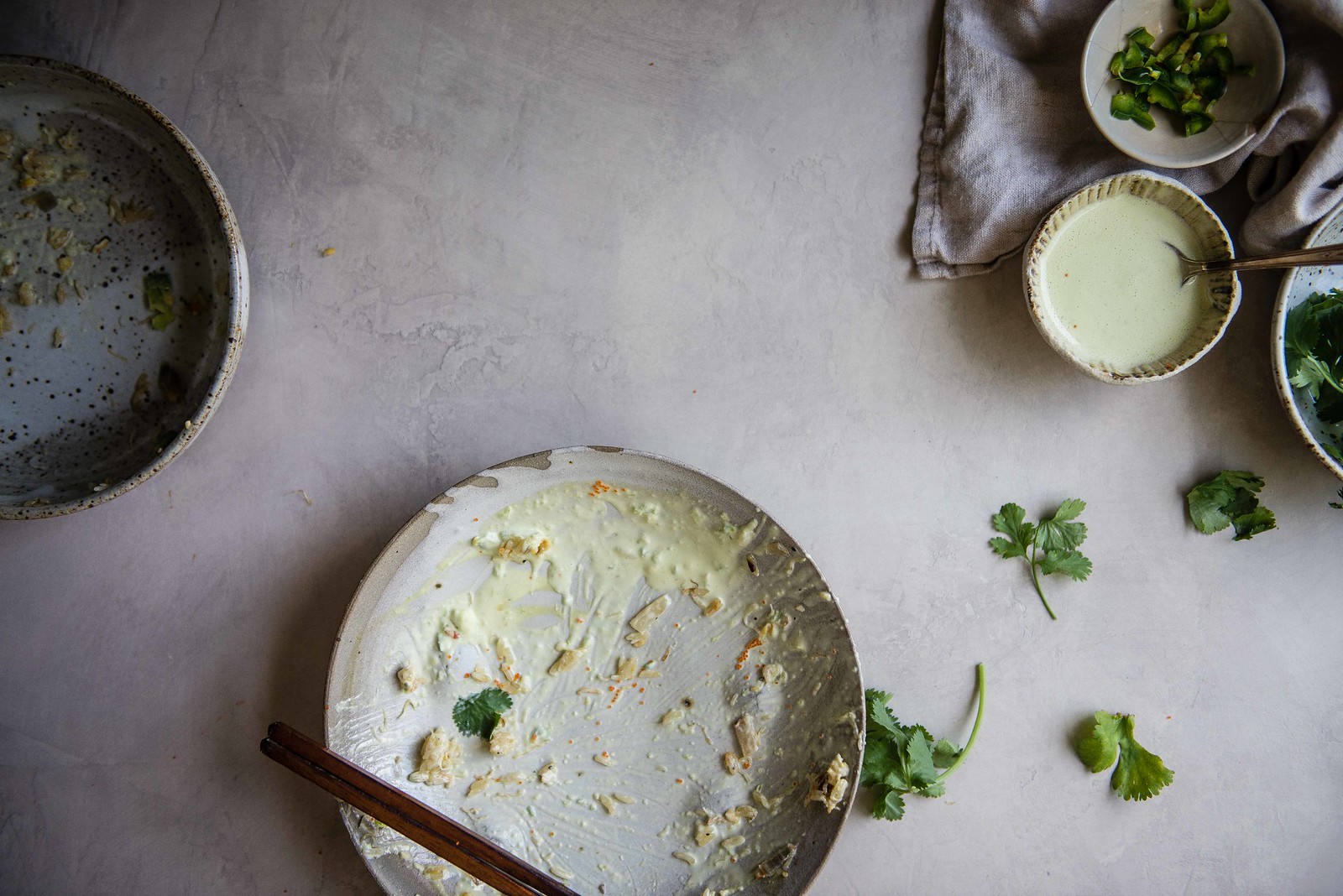 Adapted from Dale Talde on The Splendid Table.

For the fried rice:

For the jalapeno aioli: