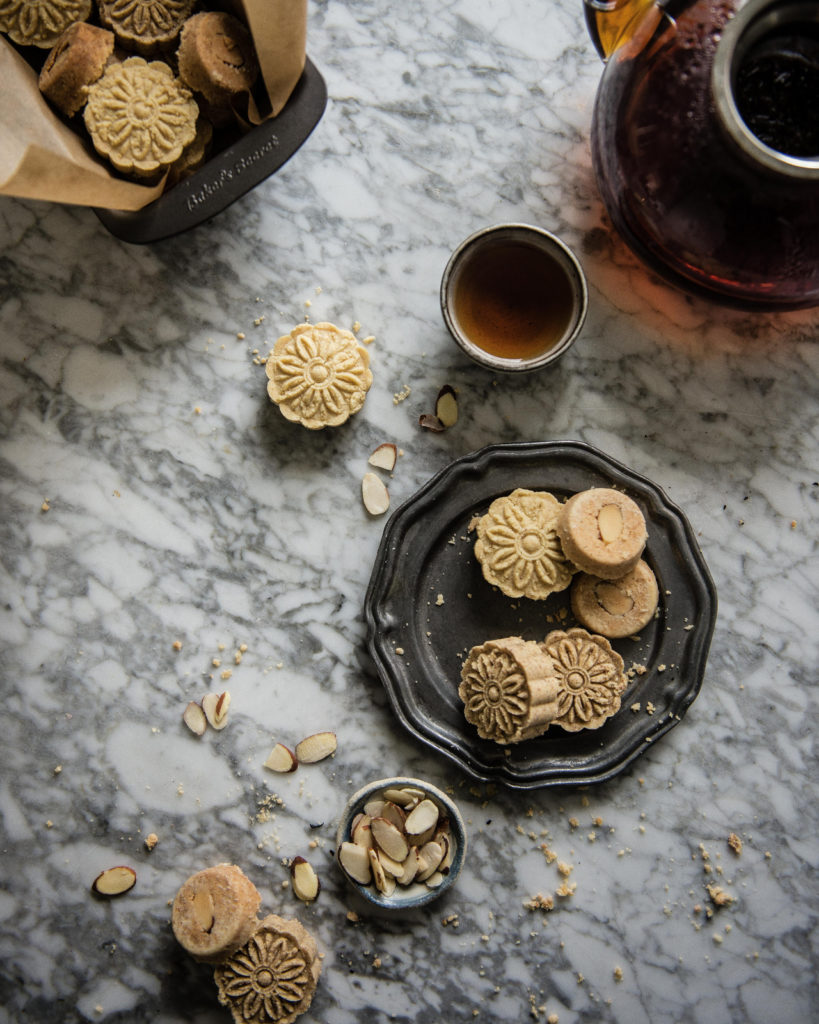 The day we visited Macau was a rainy one.  We splashed around from Senado Square to the Ruins of St. Paul, hunted down Margaret’s Cafe e Nata for caramelized, blistered Portuguese egg tarts only to discover to my utter dismay that it was closed on Wednesdays, and eventually ended up, soggy-toed, in the Venetian Macau, which I suspected meant we were doing Macau wrong but at least meant that (1) we were nice and dry and (2) I got my Portuguese egg tart fix after all at a Lord Stow’s Bakery.

Along the way, almost every place we visited had a red-marquee’d outpost of Koi Kei Bakery nearby, filled with boxes of festively-wrapped baked goods and offering samples of stout little Macau-style almond cookies.  I have no idea how I lasted until the end of the day, because I am normally powerless in the face of anything free, but I finally tried a sample at a Koi Kei kiosk in the middle of a concourse in the Venetian Macau.  It was so good that I promptly doubled back for another one, spent the rest of my time there wondering whether the employee at the kiosk would recognize me if I went back for a third, and, when it was finally determined that I’d maxed out on the Appropriate Number of Samples a Reasonable Adult Can Take, tried to convince B2 to go back for me.  Really, this is why I can’t go anywhere nice. 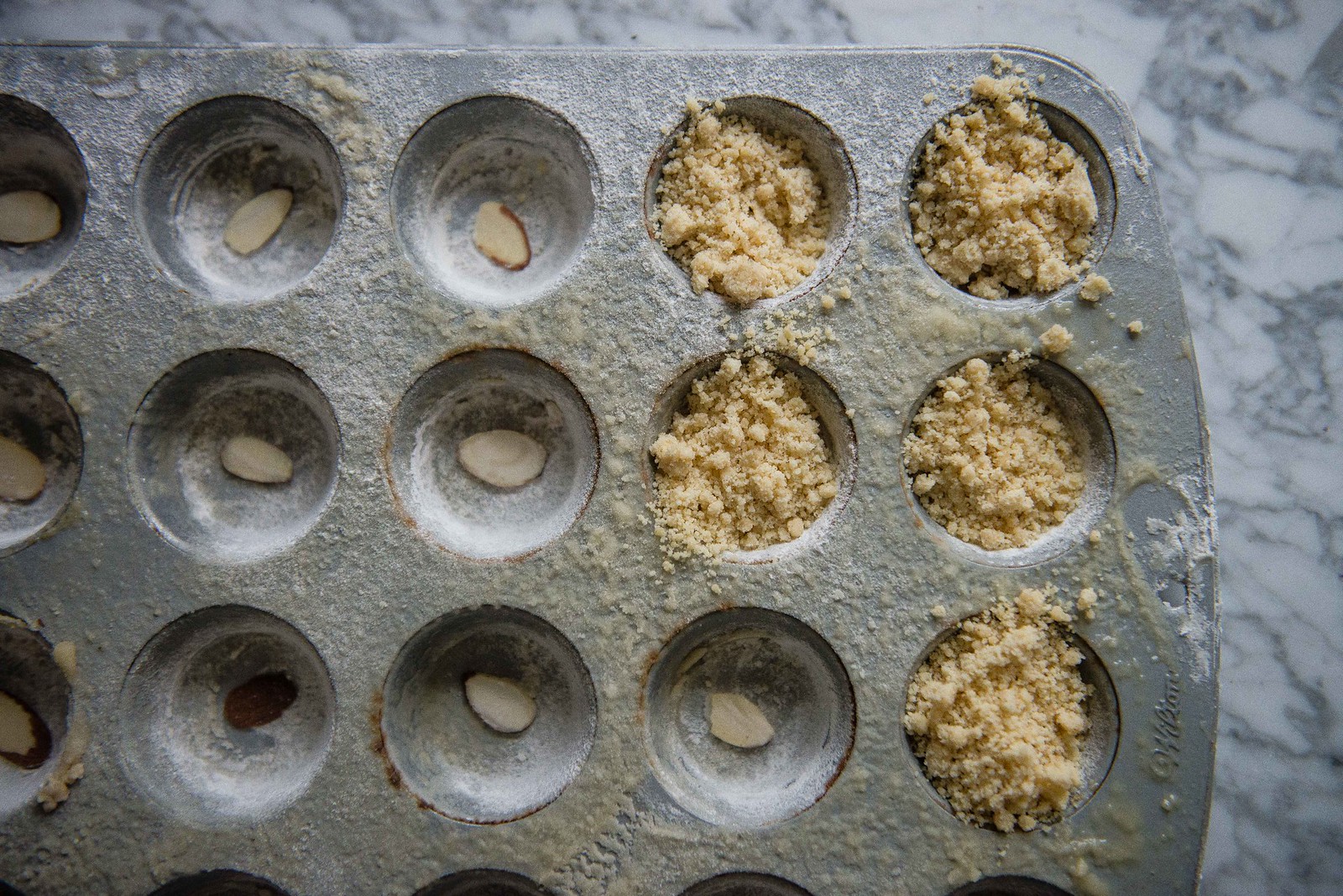 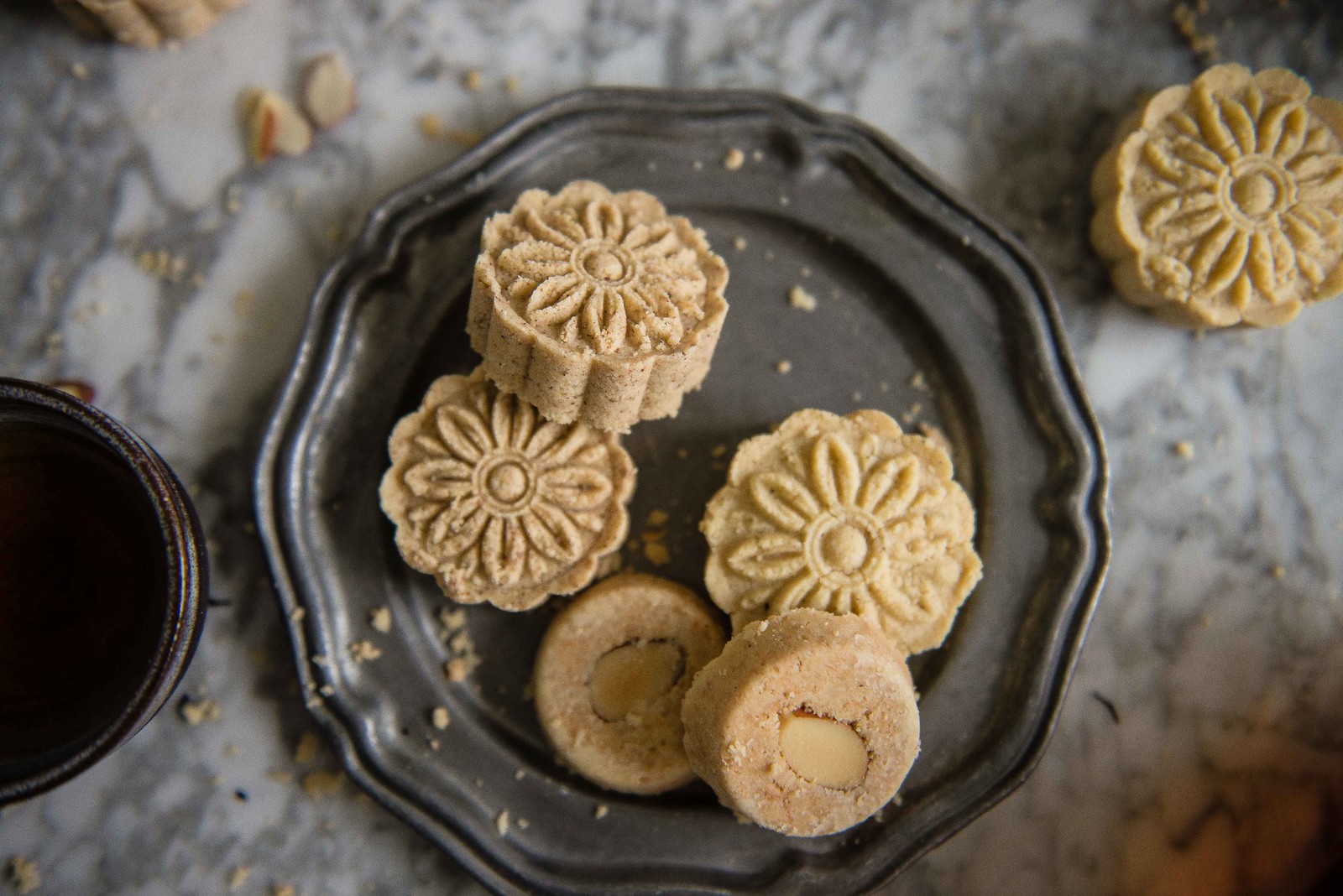 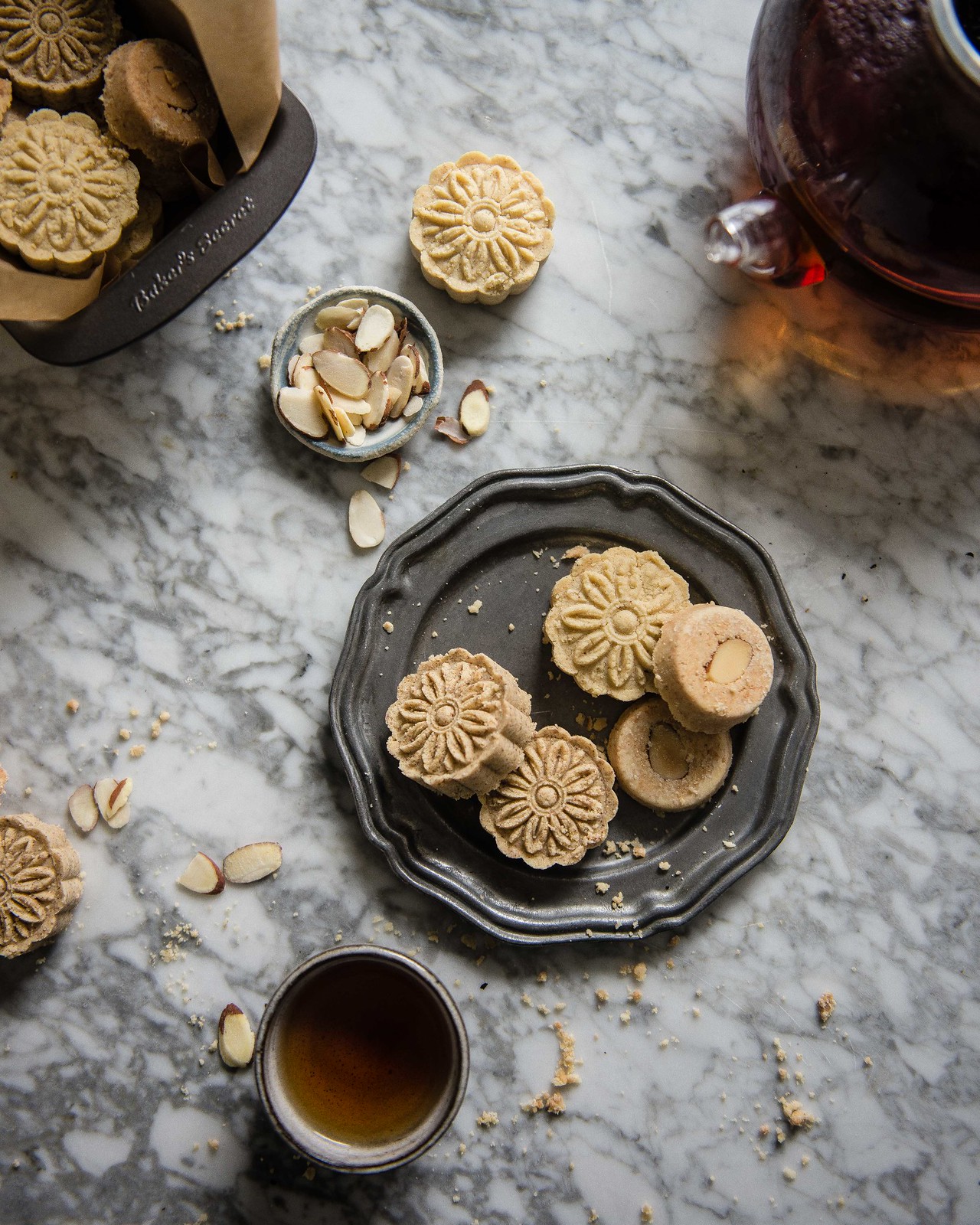 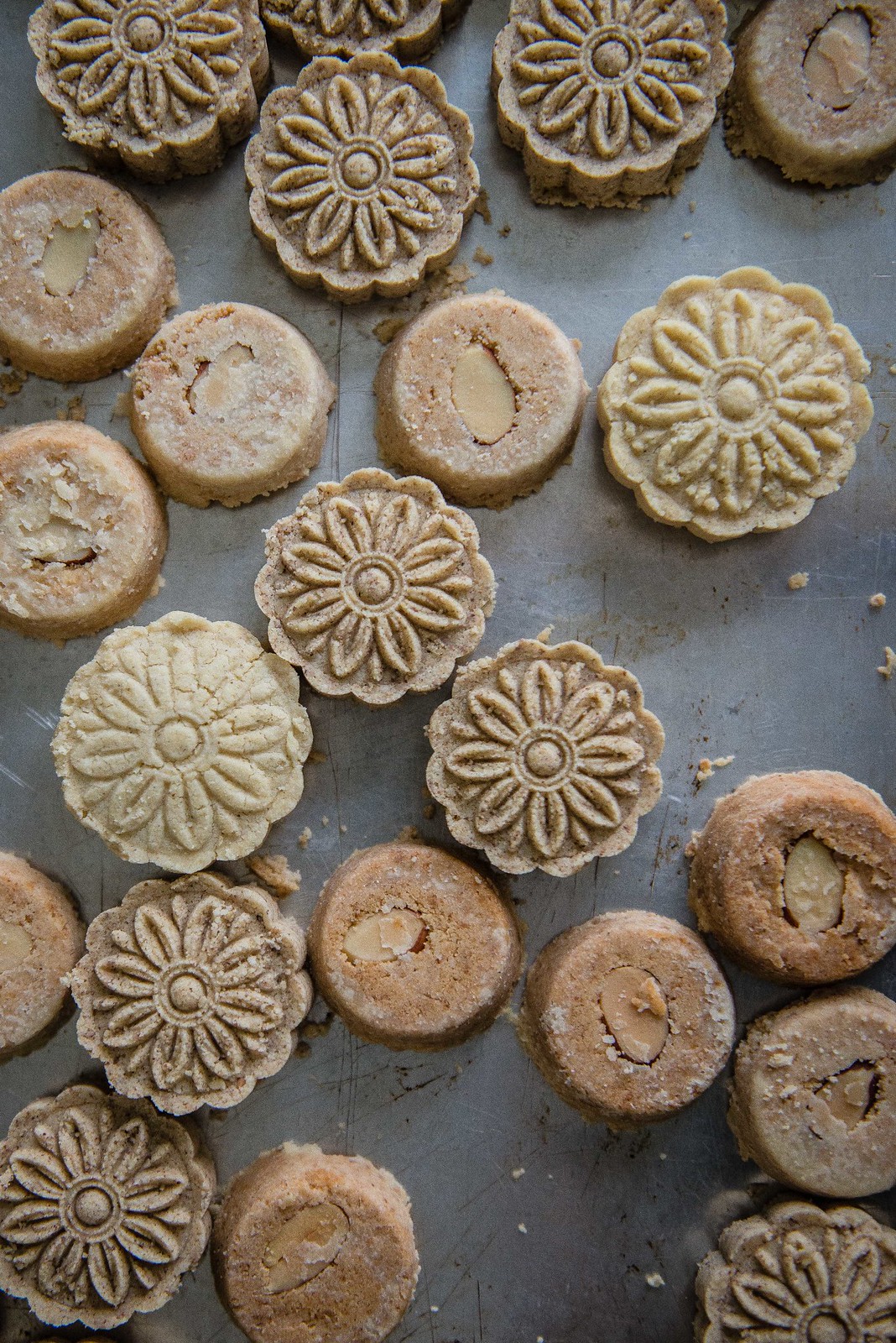 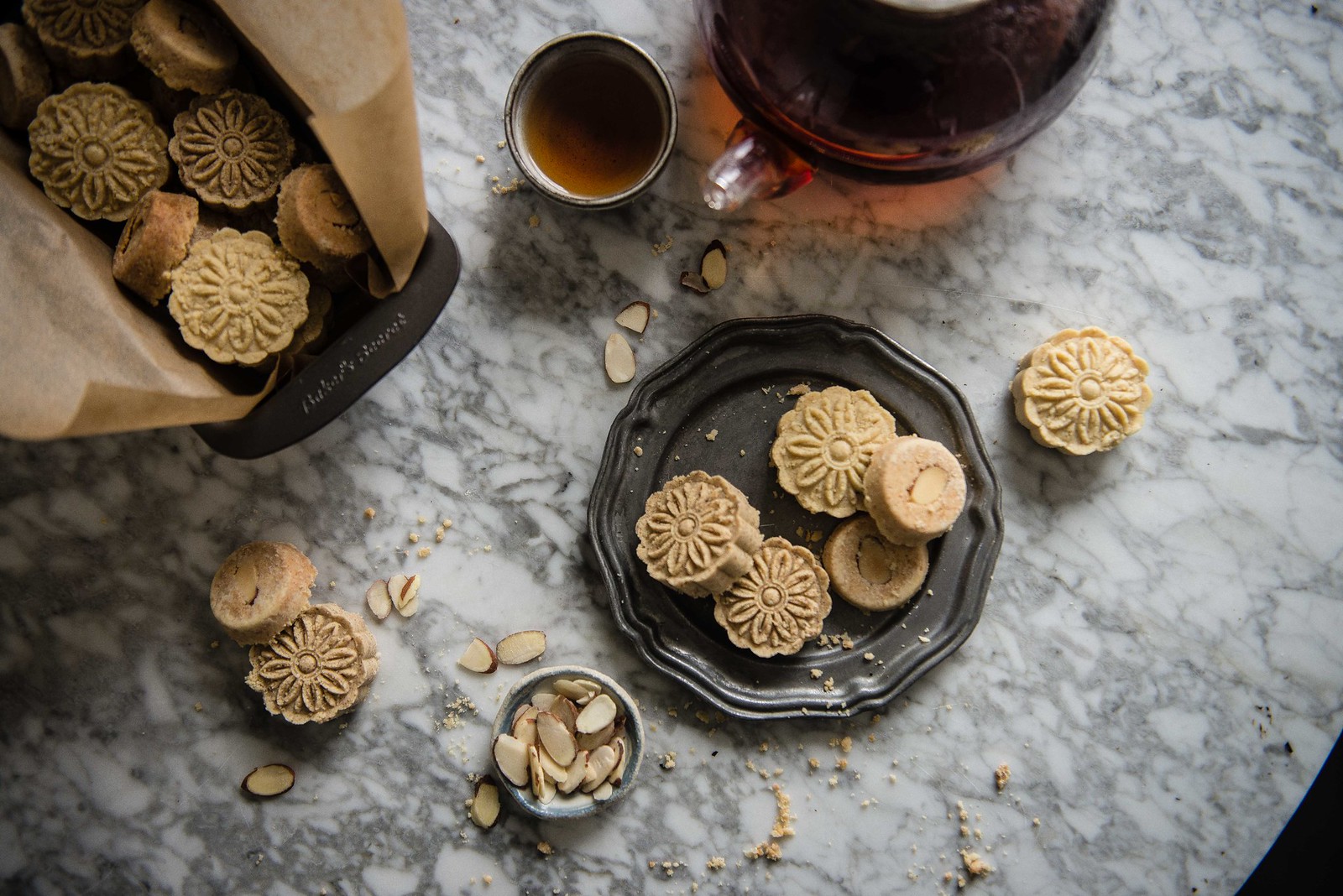 Macau-style almond cookies are tender and crumbly, sweet but just a tad savory, and fragrant from almond and mung bean flour.  I did end up buying a tub of them from Koi Kei like a respectable person, and enjoyed them, one crumbly piece at a time, for weeks afterward.  I don’t know how I forgot all about them after that, but it wasn’t until a few weeks ago, randomly reminiscing about our trip and thinking of Lunar New Year this weekend, that I remembered how much I loved them and set out to try to make them at home.

Once you track down mung bean flour, they aren’t particularly difficult to make, but the first several batches I tried just seemed not quite right.  A first batch, with almond butter and equal parts mung bean flour and almond meal, had a nice flavor but a gummy texture, another batch with shortening had good texture but no flavor.  The third, with coconut oil, was really good but just a bit too coarse and not the powdery, melt-in-your-mouth goodness I remembered.  And the latter two were murderously hard to get out of the mooncake mold I was using.  So, with my entire kitchen under a thick layer of cookie crumbs, I finally hunted around on the Internet for Koi Kei’s ingredient list. At least according to one source, they seemed to use more mung bean flour than almonds, a bit of peanut, and the interesting addition of milk powder and cornstarch.  A few tweaks later, lo and behold — they were, at least to me, perfect.*

Happy Lunar New Year to those of you celebrating! I hope it’s full of love, family, and friends.  And lastly, thank you so much for your kind comments on this last post.  I am so touched, and so very grateful! 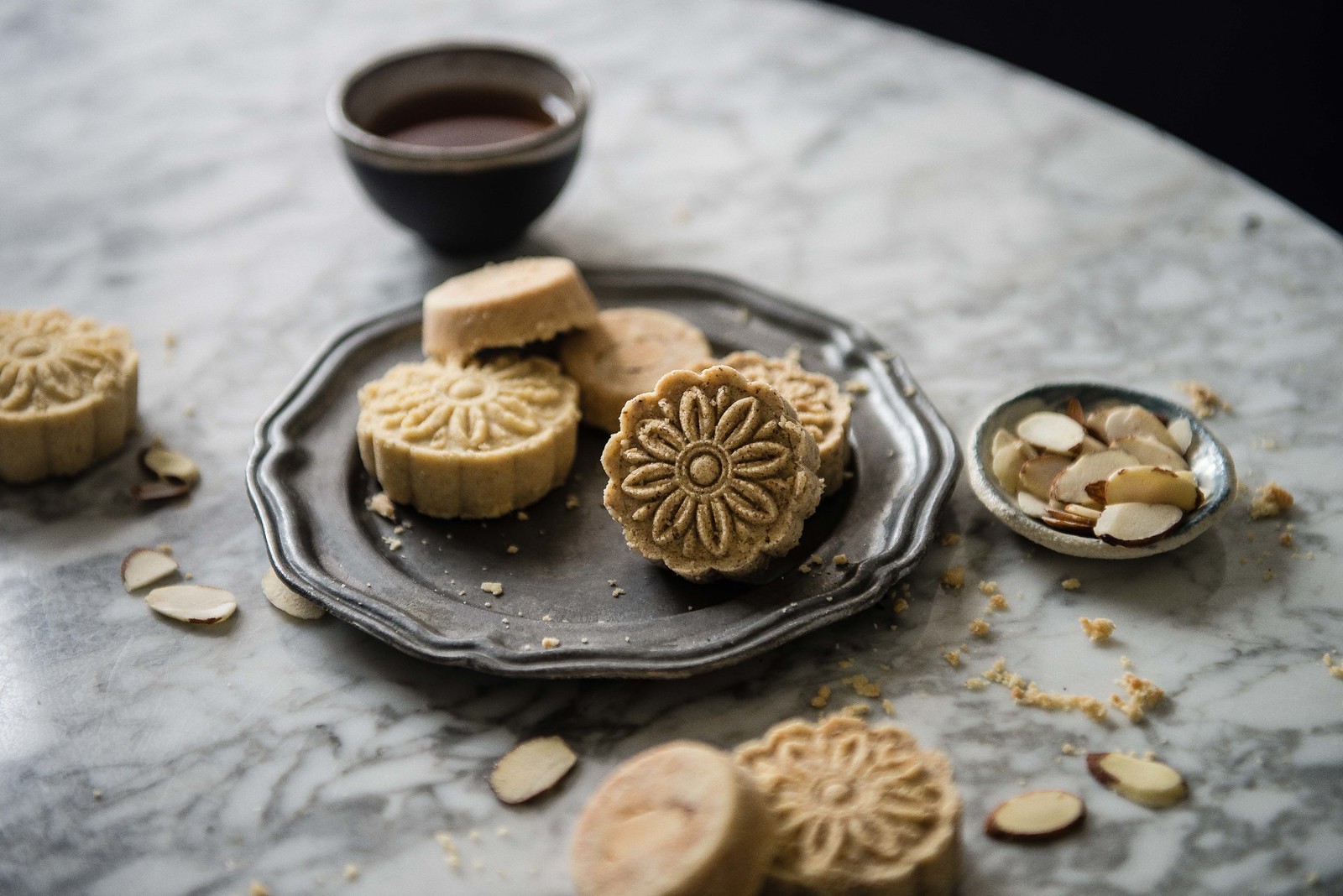 *OK, so they were no easier to get out of the mold. But I’ve written the recipe below using an alternate method, baking them nice and easy in a mini cupcake tin. Hurray!

Macau-style almond cookies are traditionally made using lard, but I went the simpler route and, after it worked well in mooncakes, used coconut oil instead, another fat that is solid at room temperature. (Shortening is the more common replacement for lard, but I wasn’t a huge fan of the taste in these cookies.) The addition of non-fat dry milk powder and cornstarch makes the cookies more tender, but it is not essential (and can be omitted to keep it vegan and grain-free). As written here, the cookies won’t turn out in the flower shapes pictured, but will look like the smaller, almond-topped ones instead. For the more intricate patterns, see Notes below.

To form the cookies like the flower-shaped ones shown, you’ll need a plunger-style mold (I used these mooncake ones) or a wooden mold like this. I found these to be a devil to get out of the molds, so I would advise against this method despite how pretty they are, but if you have the patience, I’d recommend the following: (1) Flour the mold well in between each cookie, tapping out any excess. (2) For a plunger-style mold, press 1 to 2 tablespoons of the cookie mixture into the mold and press it first against your palm so that the mixture won’t fall out when you turn it onto a flat surface. Press down on the plunger very firmly, then lift the mold and use the plunger to push the cookie out. Place on a baking sheet and repeat. (3) For a wooden mold, press the cookie mixture into the mold until full, then overturn the mold and give it a good firm thwack to dislodge the cookies. The cookies made using the mold will need a few more minutes in the oven, about 20 minutes instead of 15. I have found that experimenting with the ratios of flours is just fine, just as long as they add up to 200 grams. To that end, I expect that if you could find traditional Chinese almond powder (perhaps something like this) the cookies would taste even closer to the storebought version than these did, and you might be able to substitute more of the mung bean flour for the almond powder and still get the nice, tender texture that I was going for. Mandy at Lady and Pups just posted a fascinating explanation of the difference between American and Chinese almonds here; as she noted, almond extract is closer to Chinese almonds, and so I’ve used just a tad here to compensate. Finally, peanut flour is a common ingredient over in Asia, and I suspect it may have been the ingredient in the traditional cookies, but I didn’t hunt it down for this recipe — if you have it, I expect you could replace the peanut butter with one tablespoon of peanut flour and one tablespoon of water. (The recipe also works, if you were curious, with one tablespoon of water instead of peanut butter altogether.) 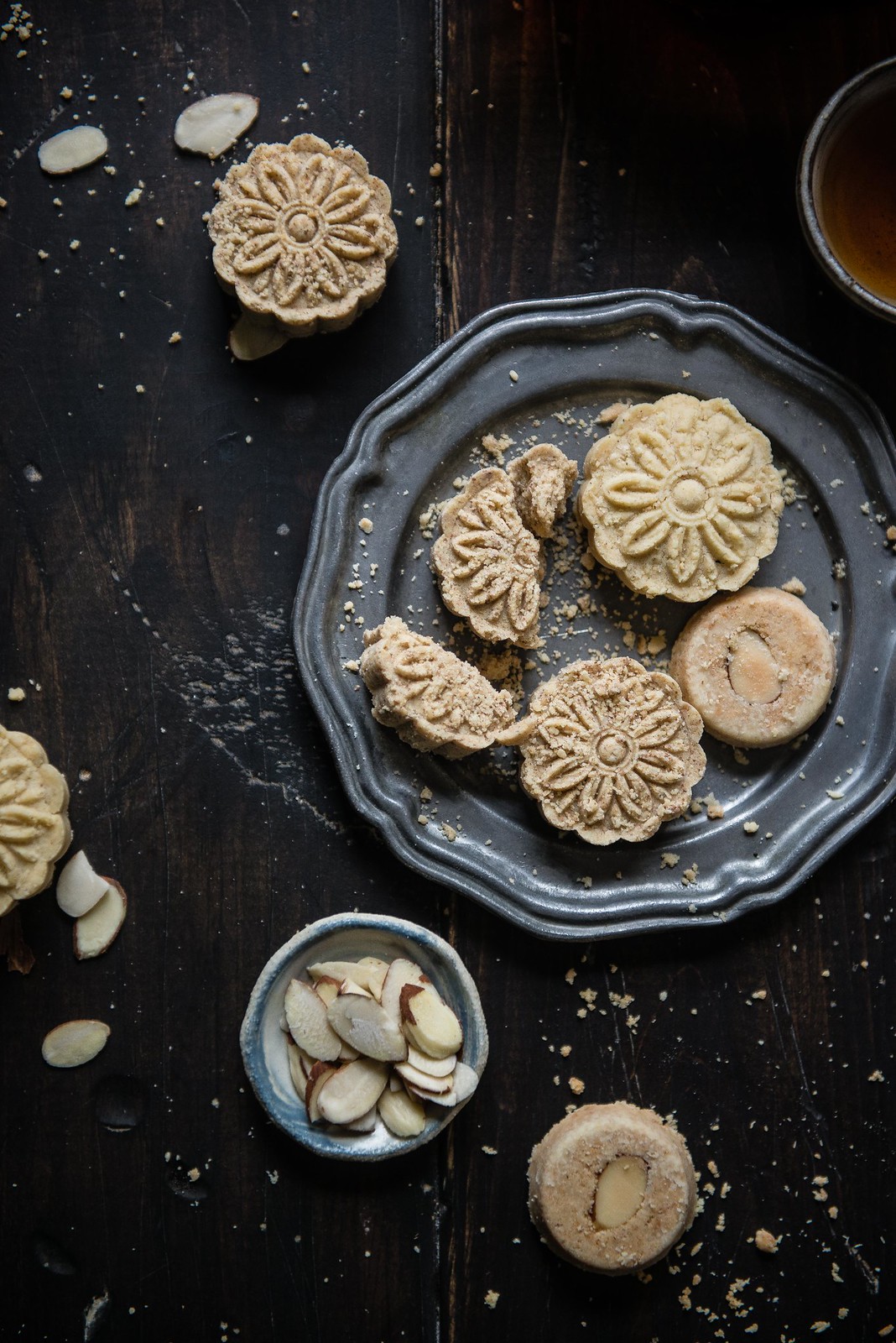 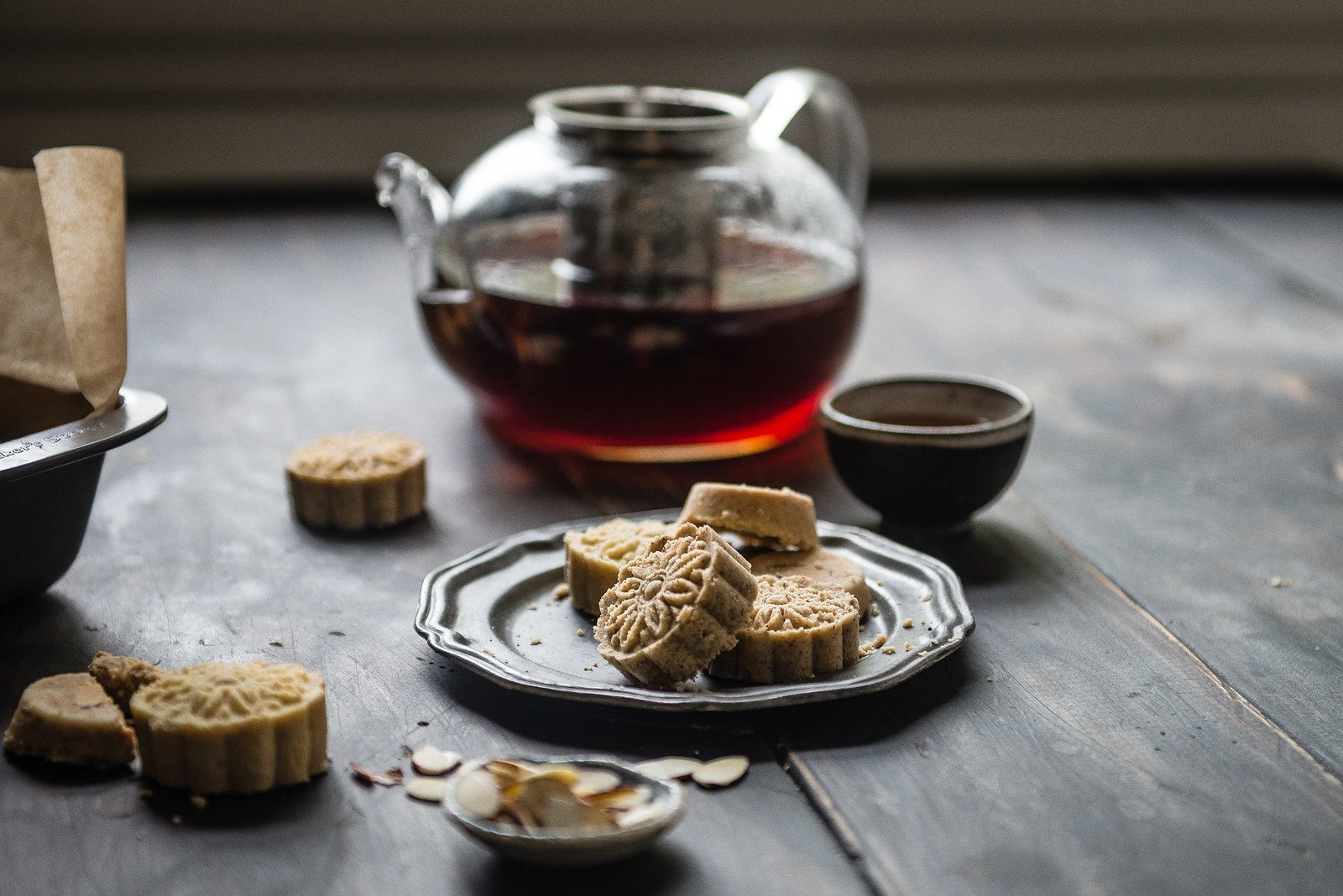 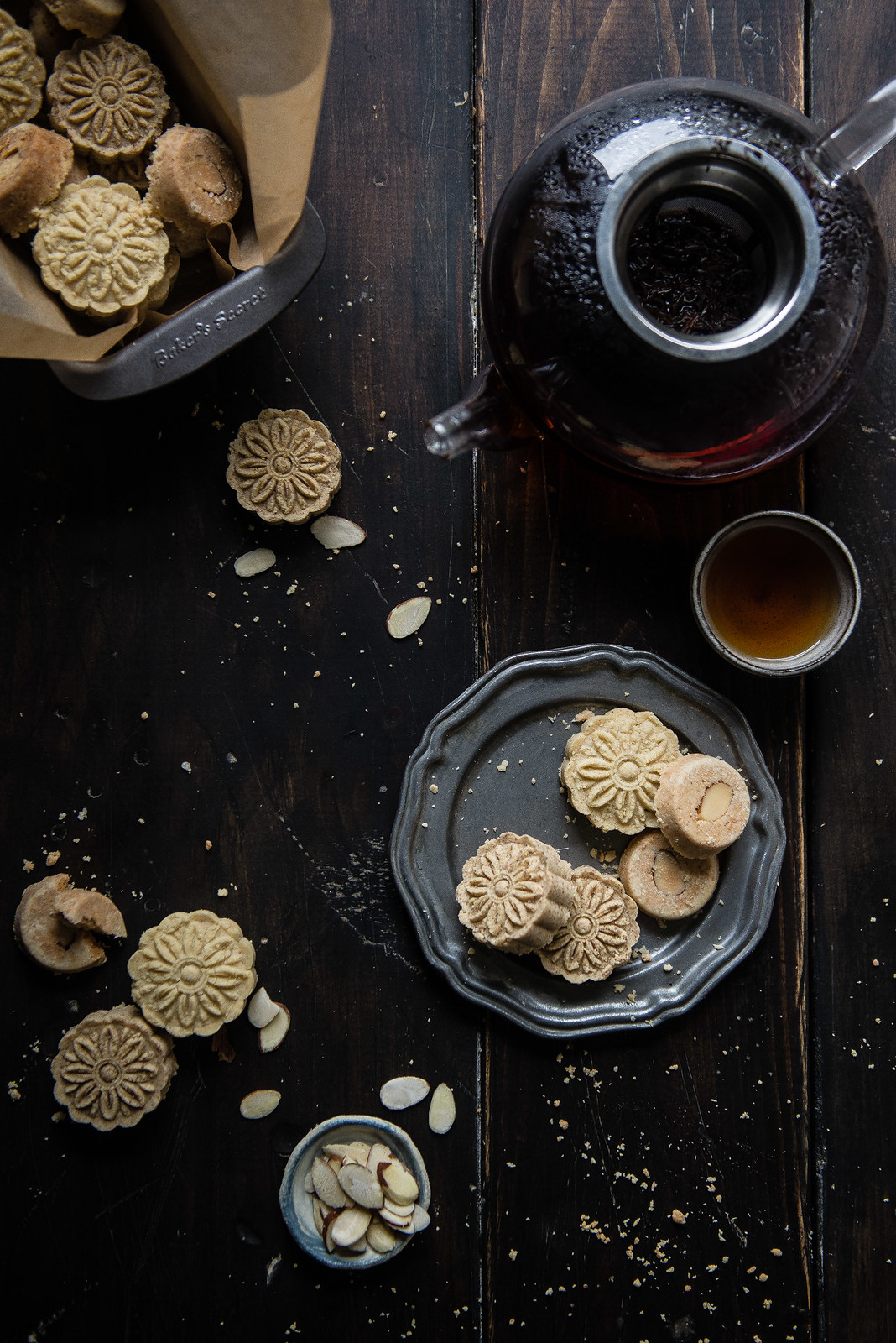 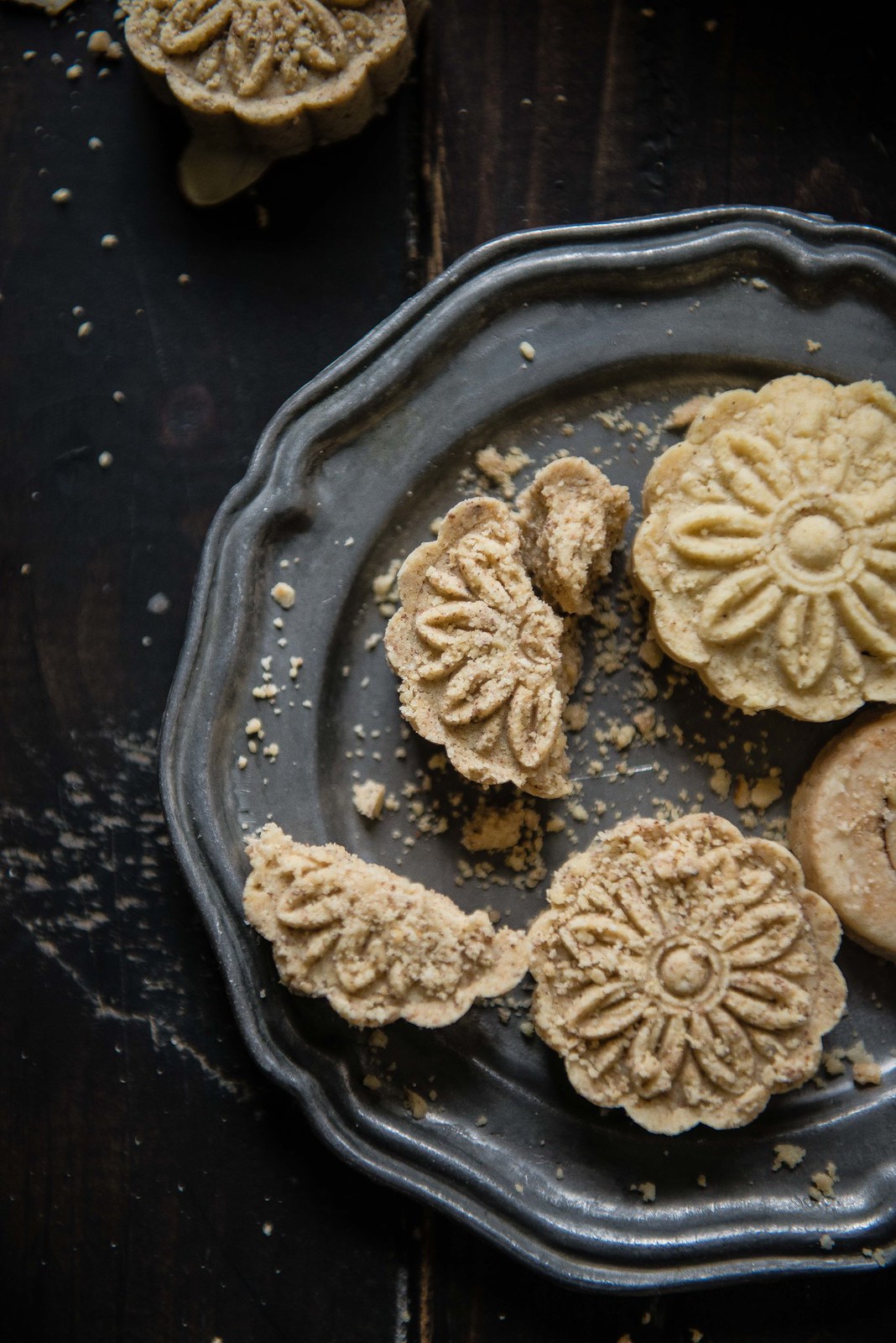