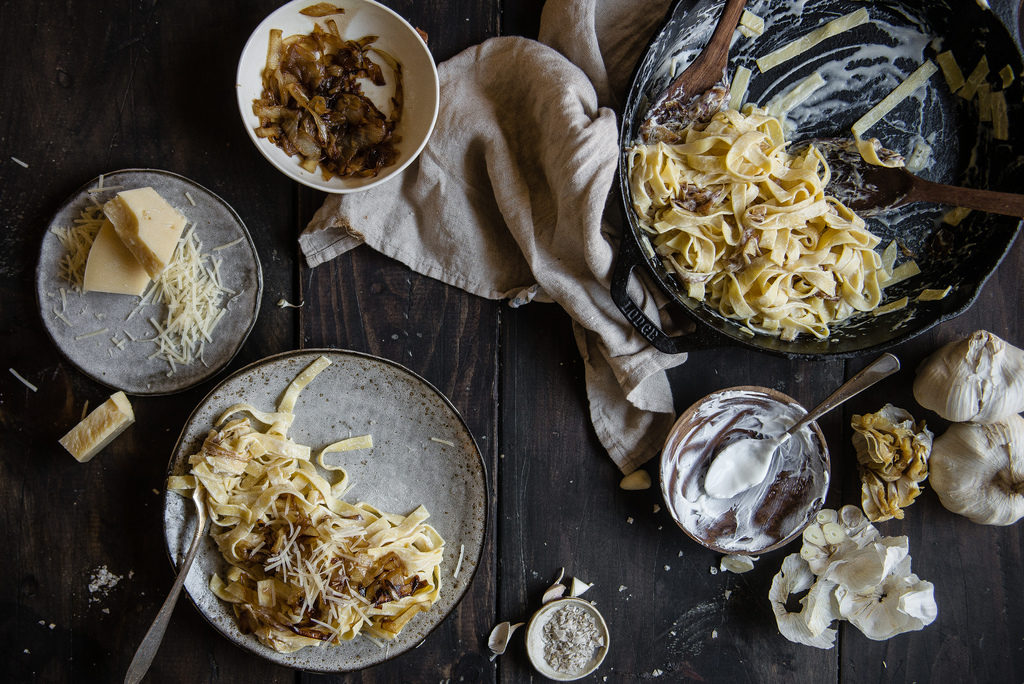 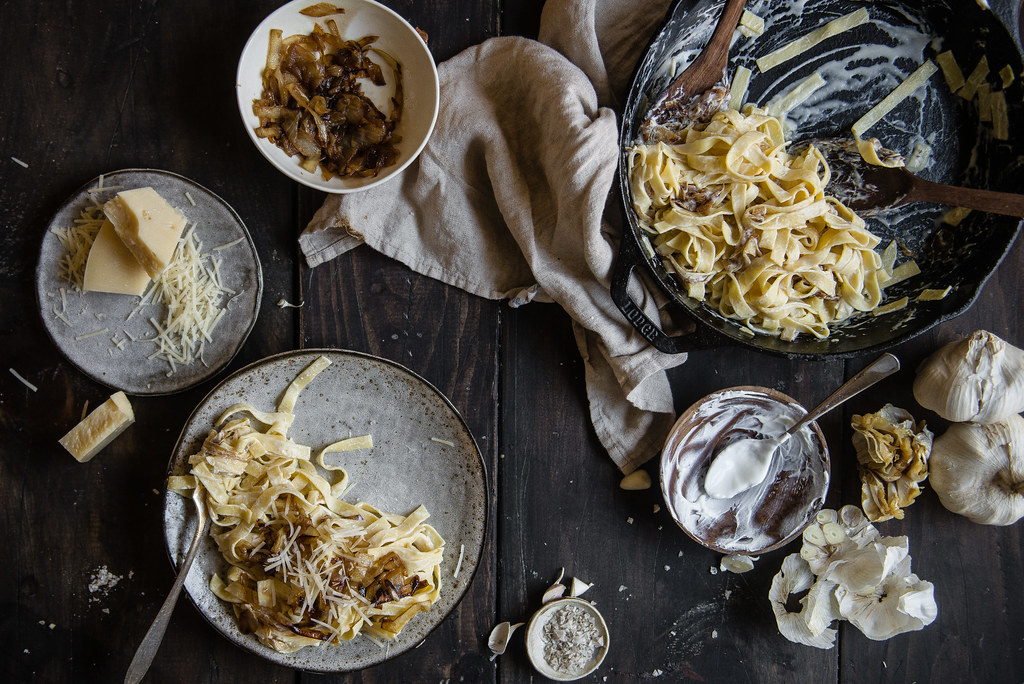 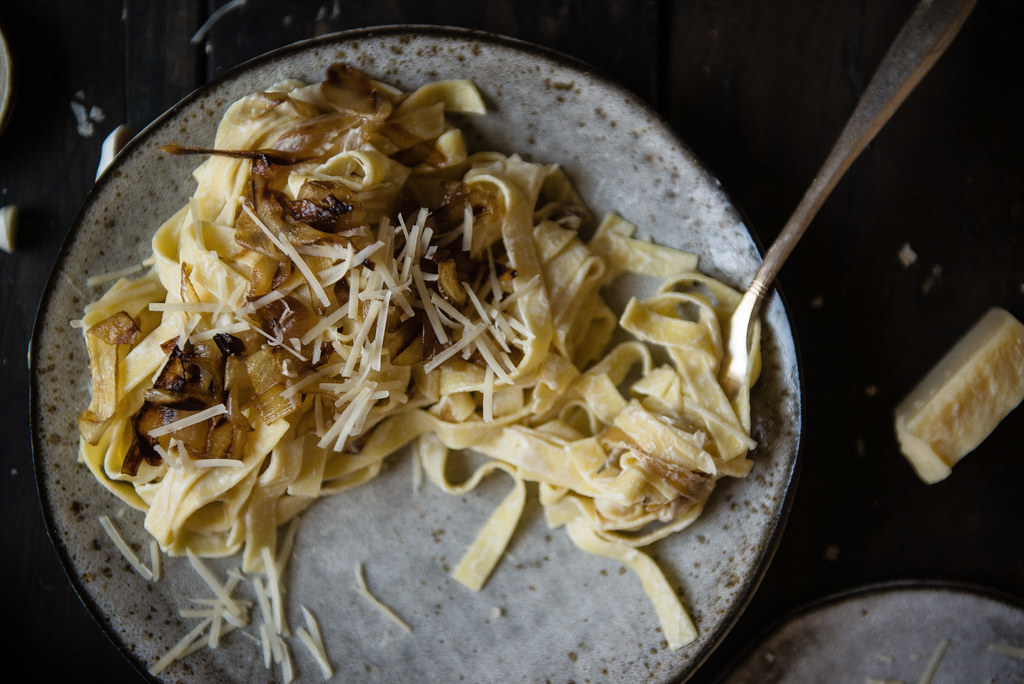 A couple of months ago I stumbled on this caramelized onion and yogurt pasta by Diane Kochilas.  It’s just like it sounds — tangles of caramelized onions and thick, strained Greek yogurt, tossed with sunshine-yellow pasta and a few ladles of starchy water, then served with nothing more than a generous grating of salty cheese on top.  Yogurt in pasta!  And by all accounts, super delicious.  I’ve been meaning to try it ever since, totally fascinated by the idea that you could get a rich, alfredo-like sauce from Greek yogurt instead of cream.  The one thing that continues to surprise me as time goes on is how rich foods tend to overwhelm me easier and easier these days — clearly this blog shows that I still love it as much as I ever did, but somewhere along the way, slightly more nourishing alternatives, especially when they’re not “lighter” substitutes but just really genius ideas that happen to be good for you, got super exciting.  (15-year-old belly with an appetite for Jack-in-the-Box breakfast sandwiches every morning, where did you go?!)

So, when I was in the mood for a big, unapologetic bowl of pasta but didn’t want to be totally incapacitated for the night, I finally tried Diane’s pasta this past Saturday. Oh my gosh, so good.  This is my slightly-adapted take on it, with a little bit of chicken broth and a healthy dollop of roasted garlic paste because B2 loves garlic.  At its heart, the dish is still eggy, springy carbs, but everything that dresses it is both nourishing and impossibly complementary — the onions are slowly caramelized into deep, molasses-like sweetness that perfectly offsets the tang from the Greek yogurt so that neither overpowers the other, and pungent, earthy roasted garlic adds a bit of savory pique.  I’d be lying if I said I wasn’t nervous about adding Greek yogurt to my pasta, but it turned out to be even more delicious than I imagined — thinned out with chicken broth, the yogurt makes a pure, creamy sauce that isn’t tart in the least, but thick, decadent, and, if anything, an improvement on cream, not a replacement.  The ultimate pantry (and things that last a long time in the fridge?) meal.

Hope you’re all having lovely Wednesdays! 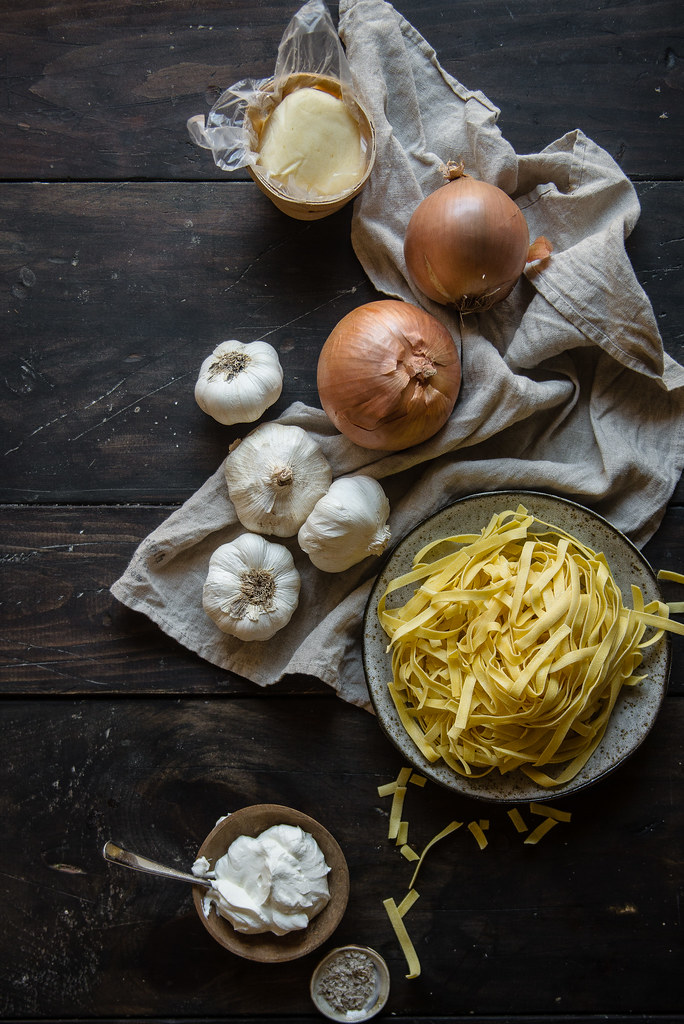 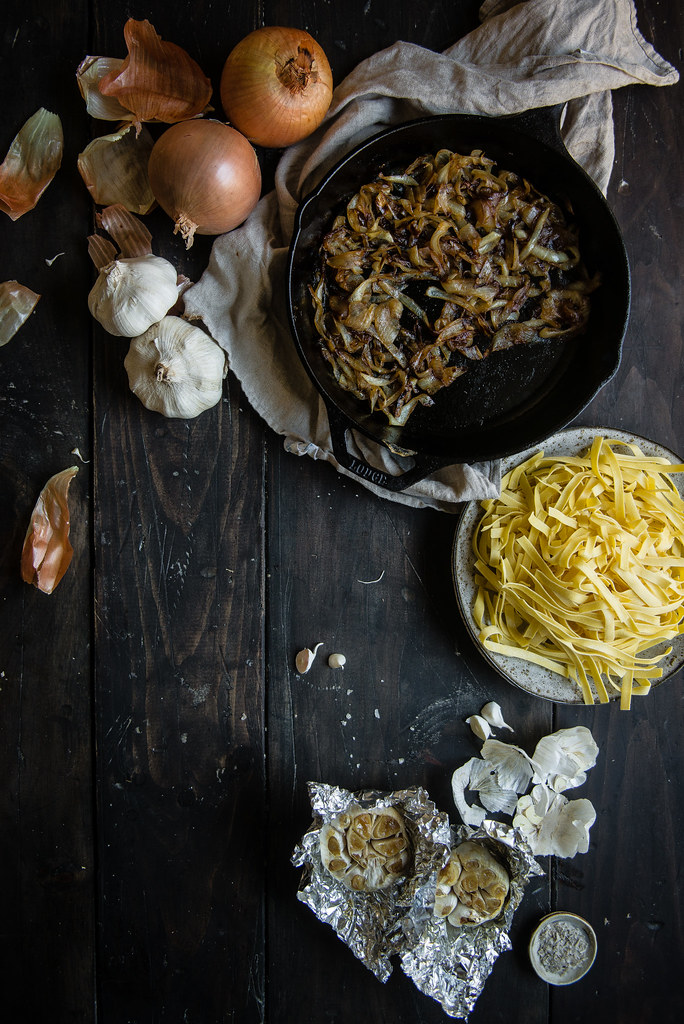 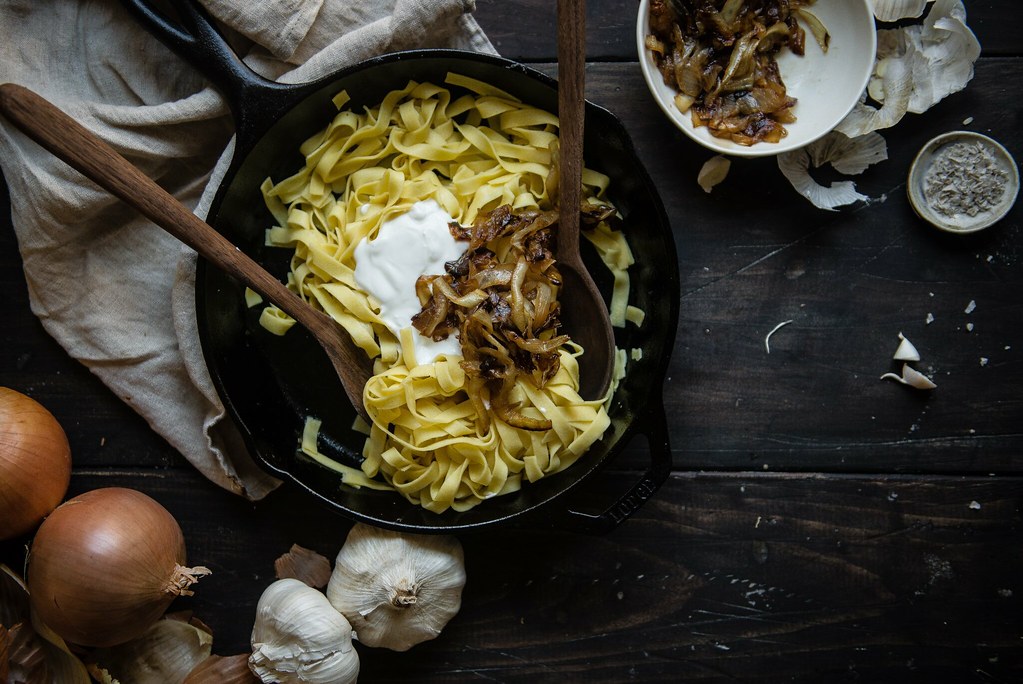 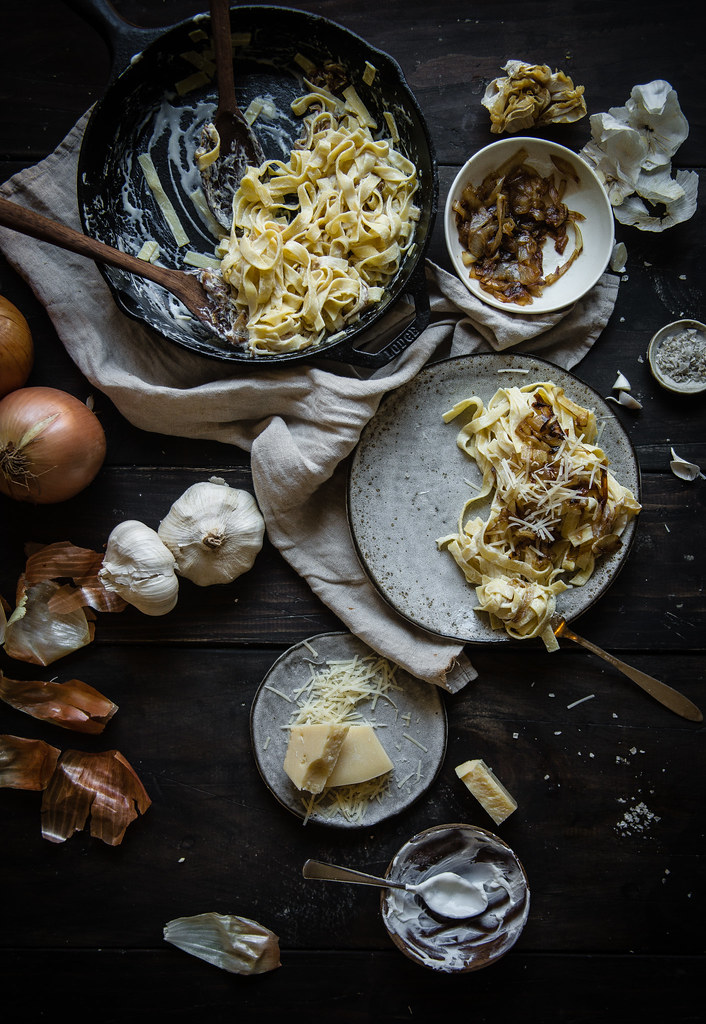 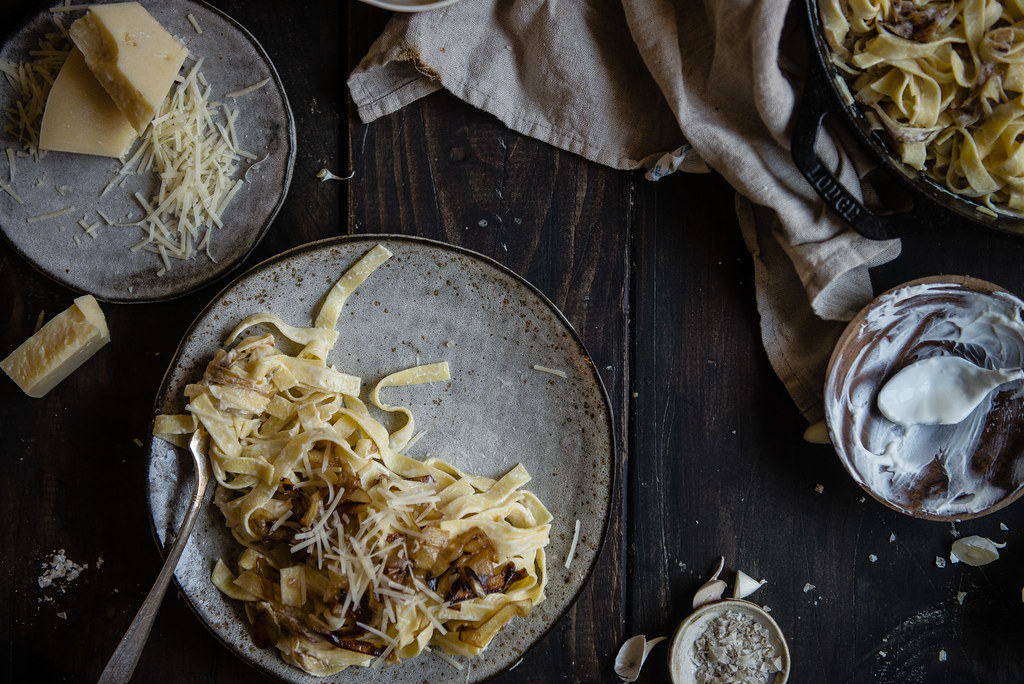 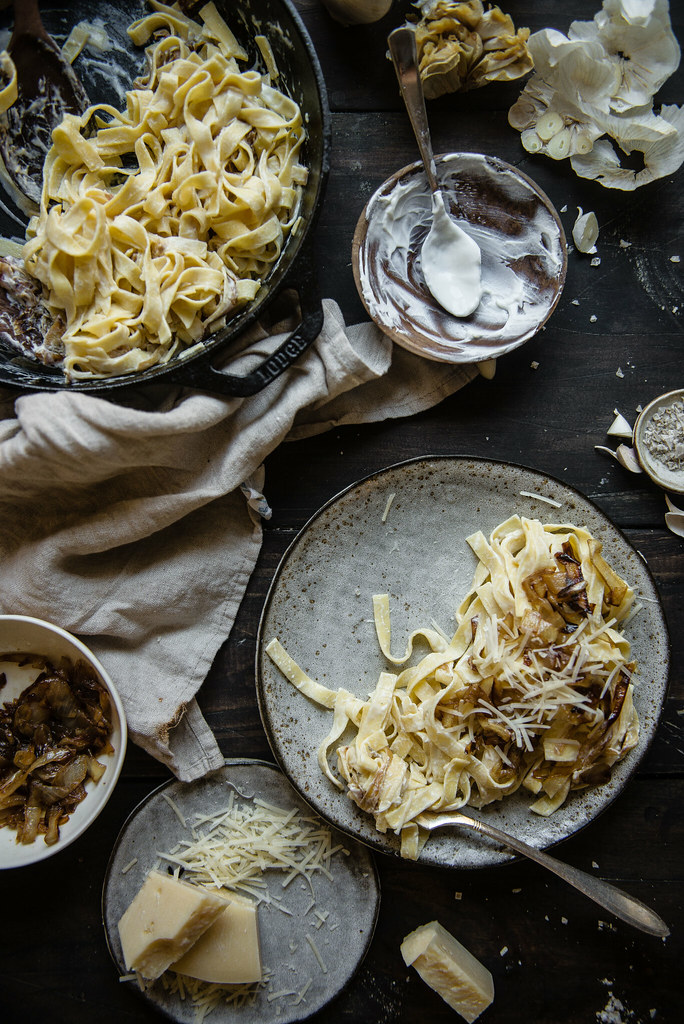 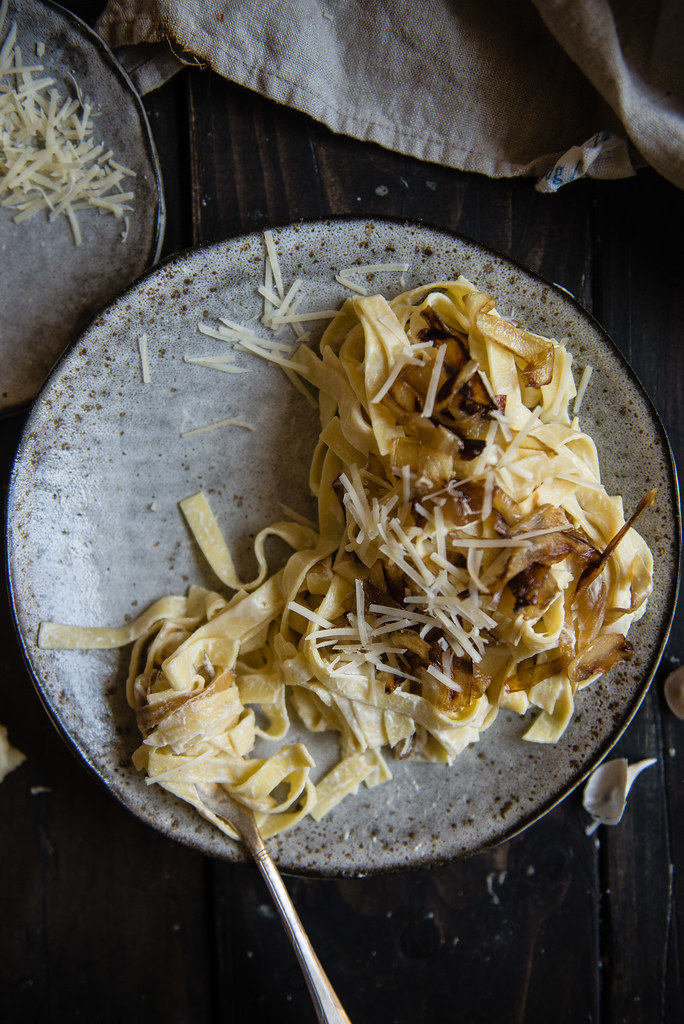 Inspired by Diane Kochilas, via Food52. I used chicken broth here just because I liked the touch of depth it added, but it’s by no means necessary — just use the starchy water from boiling the pasta instead if you don’t have it on hand. You may want to add a bit of salt at the end to compensate.