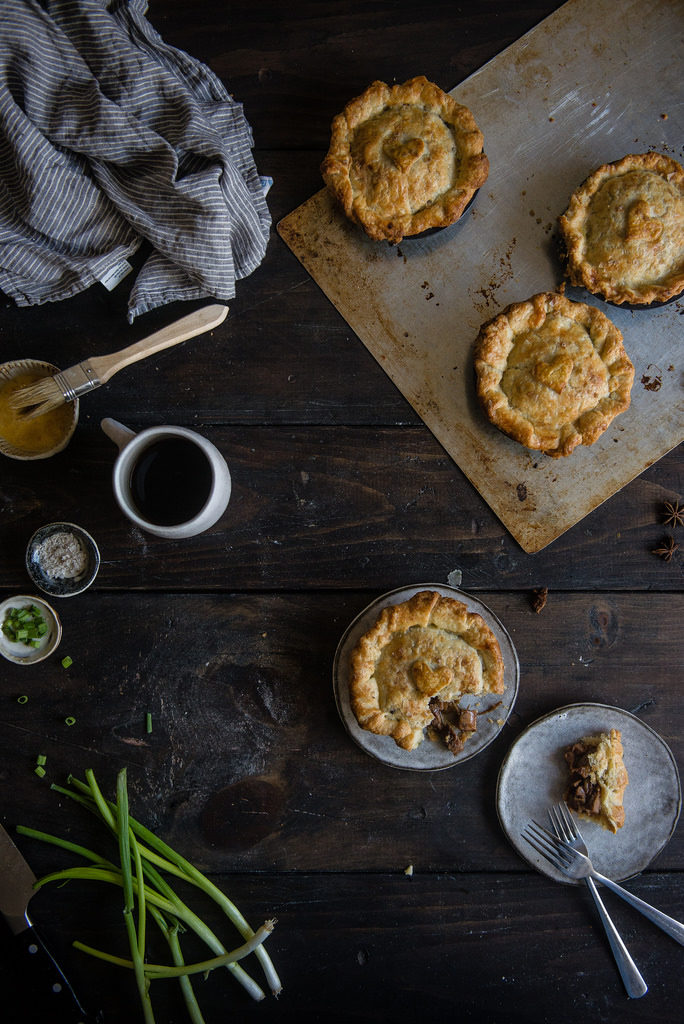 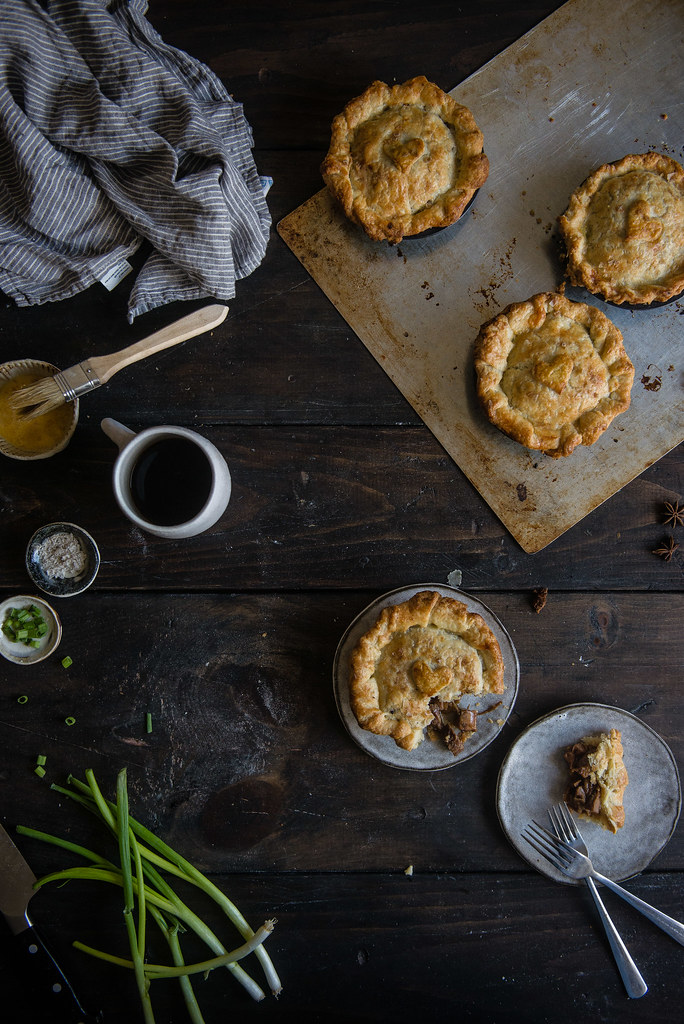 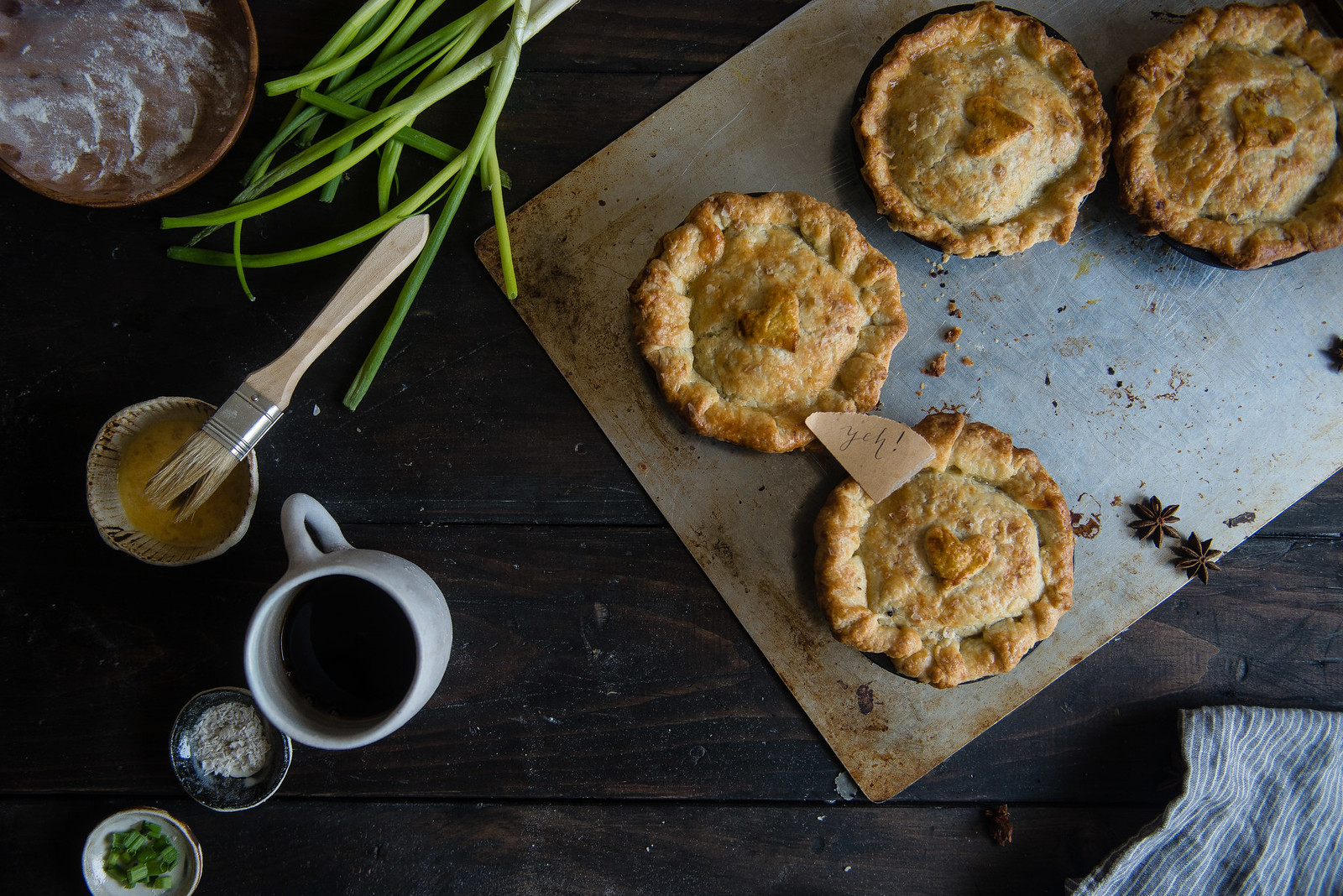 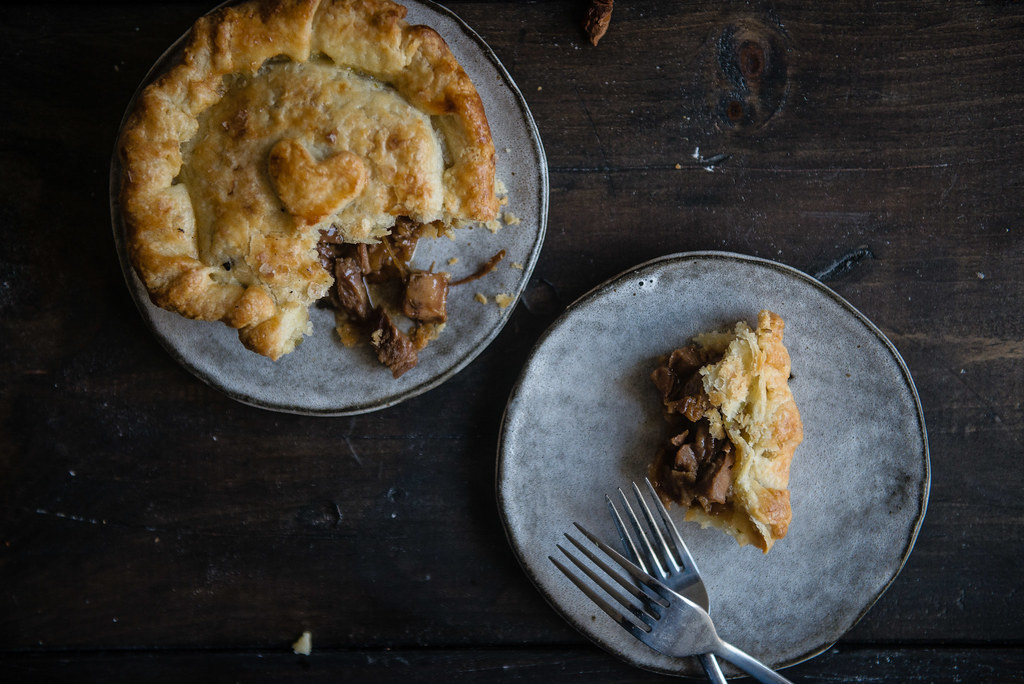 The most magical thing is happening this Saturday. The lovely, sunshiny Molly Yeh is getting married! It’s a winter wonderland wedding, right on her North Dakota farm, and bedecked in lace and snowflakes she’s going to be the most beautiful bride I could possibly imagine. I’m getting emotional about it. Egg wedding!

As scattered far and wide as we are, I always find it incredible how much we’re able to share in the special moments that happen in each other’s lives through this blogging thing we do, just through words and photos and the windows on our screens. Molly, being one of the warmest, most open-hearted (and creative) people I know, figured out a way to share it with us in the most meaningful way of all — pie! She invited us to send her pie recipes for her and her mama to bake and serve at her wedding — so that, even though we can’t be there to celebrate in person, our food (which, let’s be real, is pretty much a conduit of my existence) can. How awesome is that? 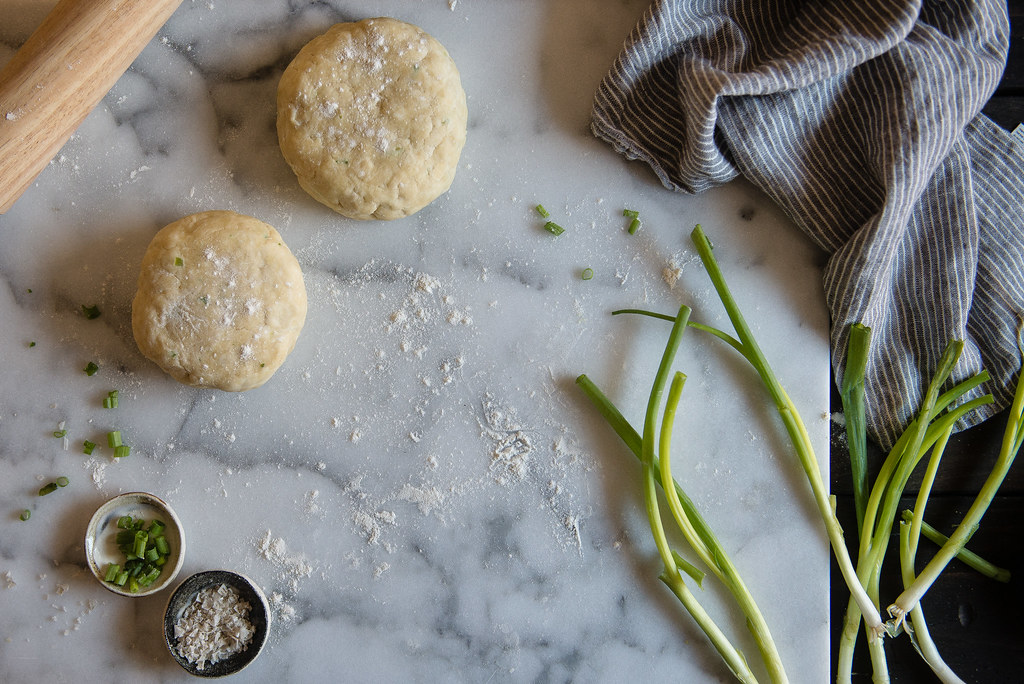 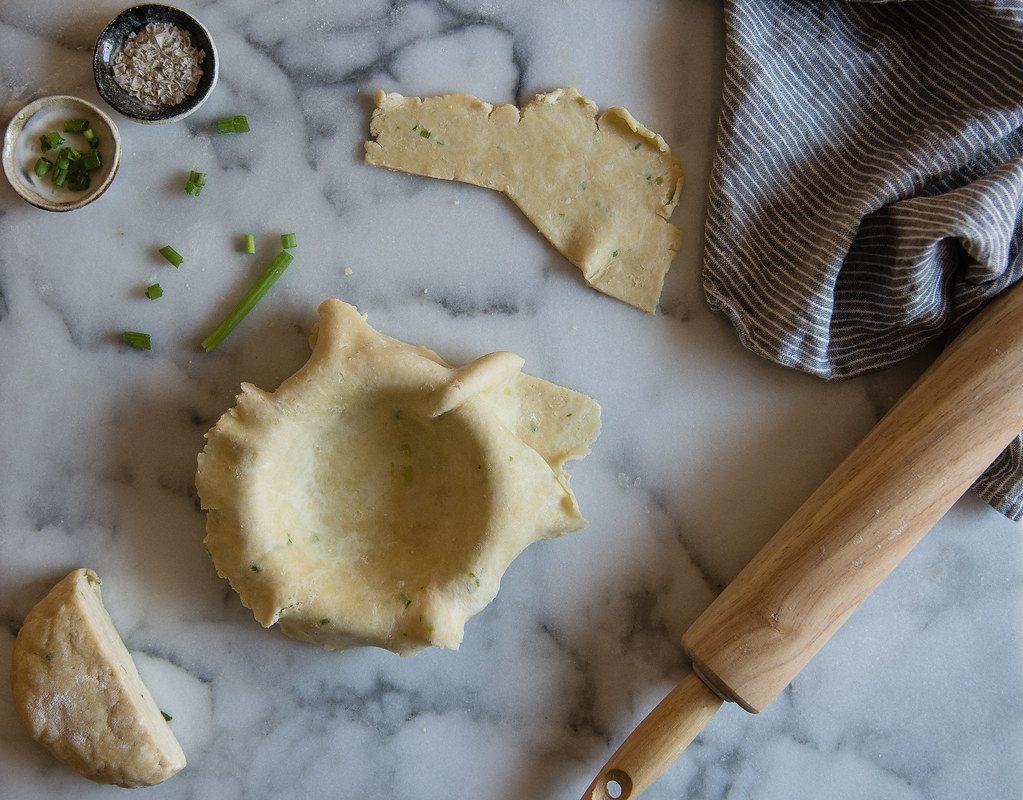 As homage to the master of the mash-up and her scallion pancake challah, these are East-meets-West pot pie love babies.  The pie crust hides finely sliced scallions and a touch of Shaoxing rice wine in its flakes, which resulted in the best pie crust I’ve maybe ever made; the pies are filled with Shanghainese red-cooked pork, or hong shao rou, which I love both because it’s delicious and because it’s so fitting — red, after all, is the color of Chinese wedding celebrations.

Red-cooked pork is one of my all-time favorite dishes — it’s traditionally made with fat-laced pork belly, pan-fried in a bit of sugar until deliciously caramelized, then slowly braised (oh, how I love braised meat) in soy sauce and magical aromatics until fork-tender and coated in amber syrup.  My favorite iterations serve it with hard-boiled eggs and knots of toothsome tofu skin to soak up all that pork flavor.   For these, I went with a simple pork-only filling, with a bit of cornstarch to thicken it for the pie; to balance out the buttery pie crusts, I used (barely) leaner pork ribs.

The result was even better than I expected. For an occasion as momentous as an egg wedding, I was pretty anxious about how these would taste, but it turns out that rich, flaky pie crust and savory-sweet, garlicky-soy meat fillings are meant to be together.  It’s the best of both worlds: multi-culti, just like Molly.  (Though I have to apologize to her Jewish guests for the pork.)

Molly, thank you so much for having us be a part of your day. It could not have been more fun or special to spend a cozy, butter-laden Saturday afternoon celebrating from afar.  Wishing all the joy and happiness in the world to the most joyous, happy person I know and her Eggboy! 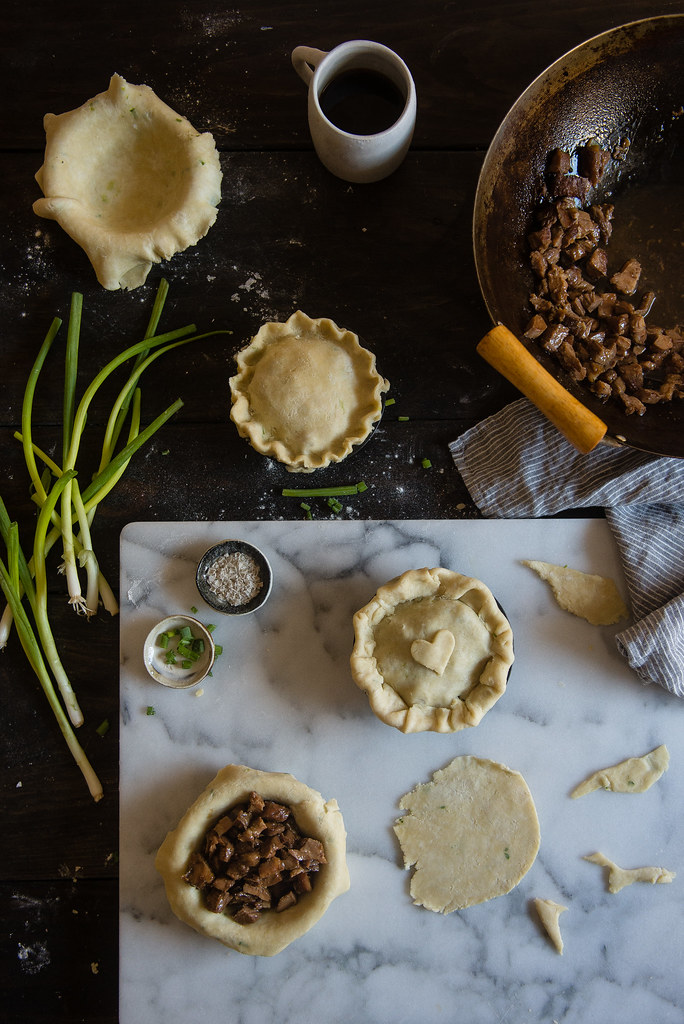 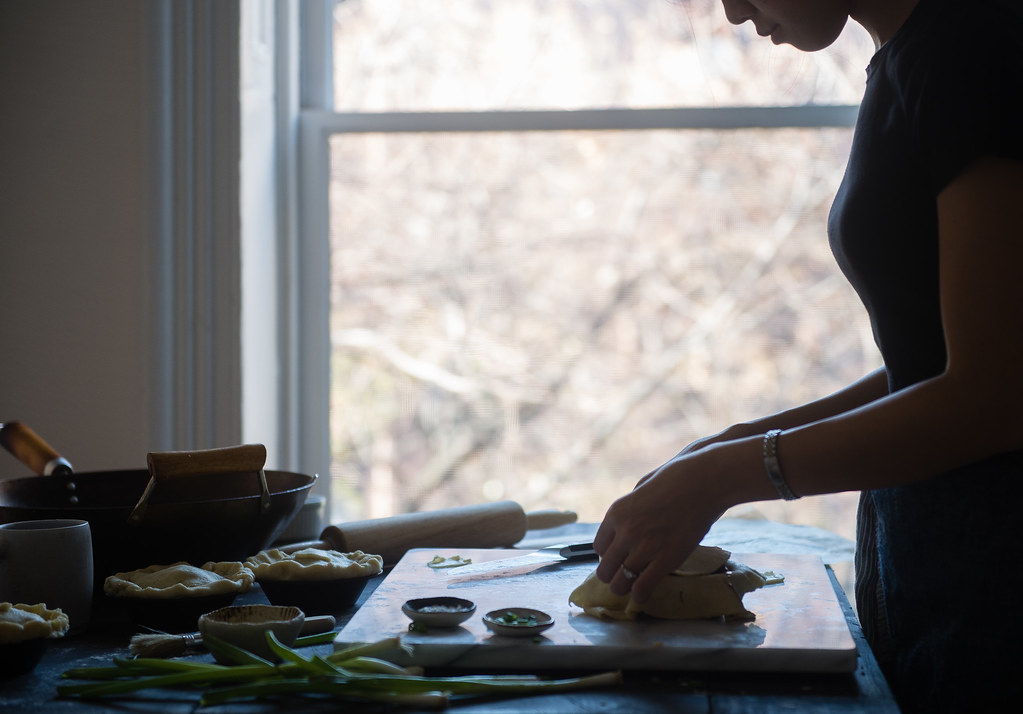 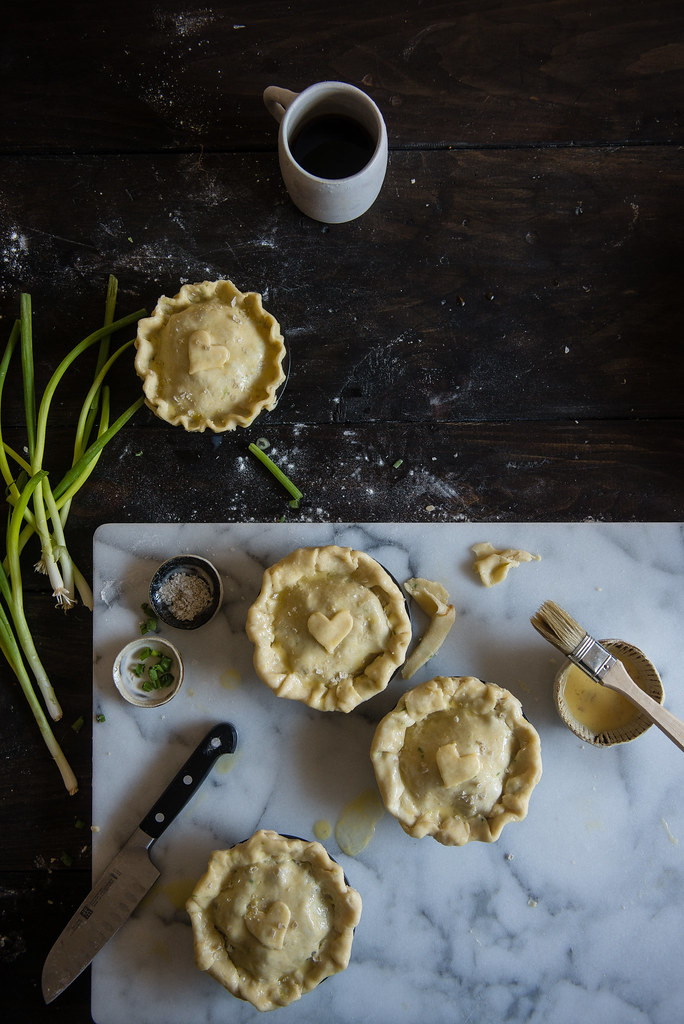 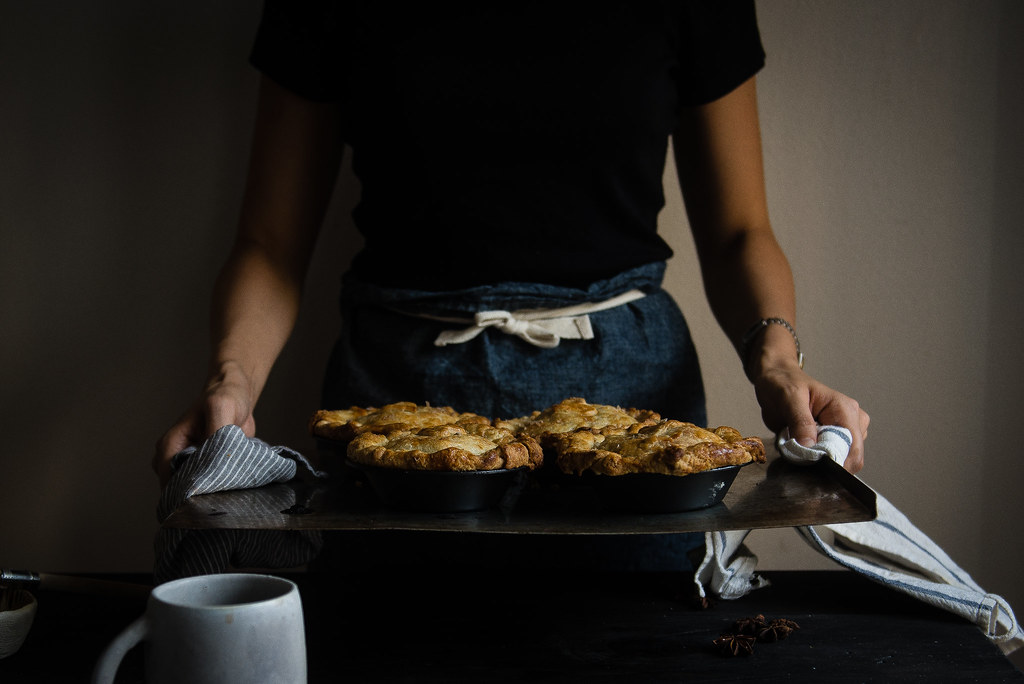 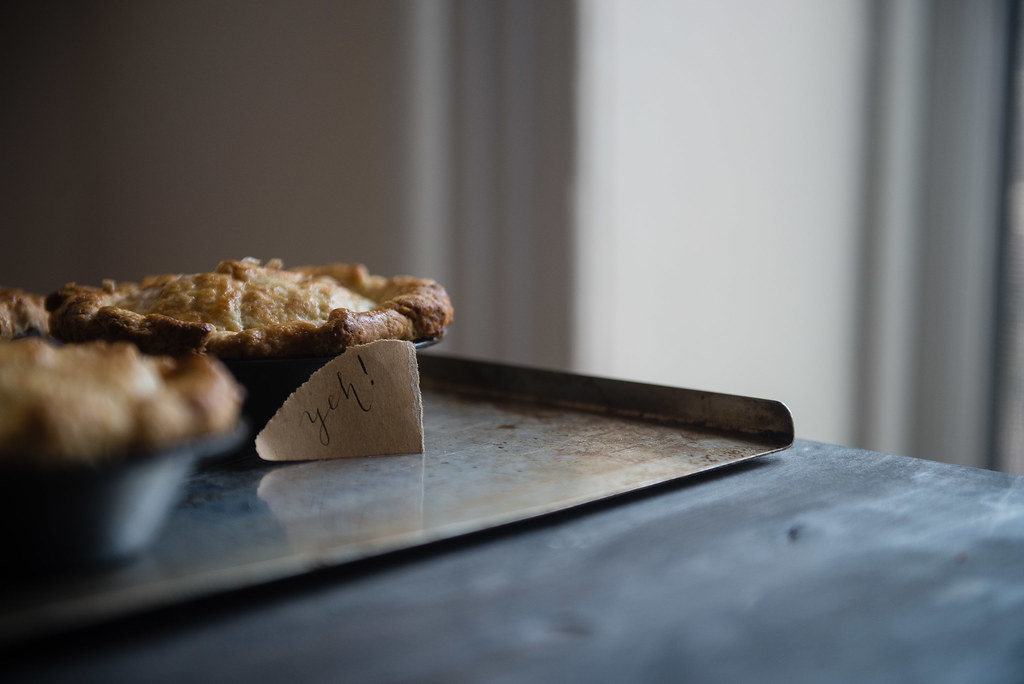 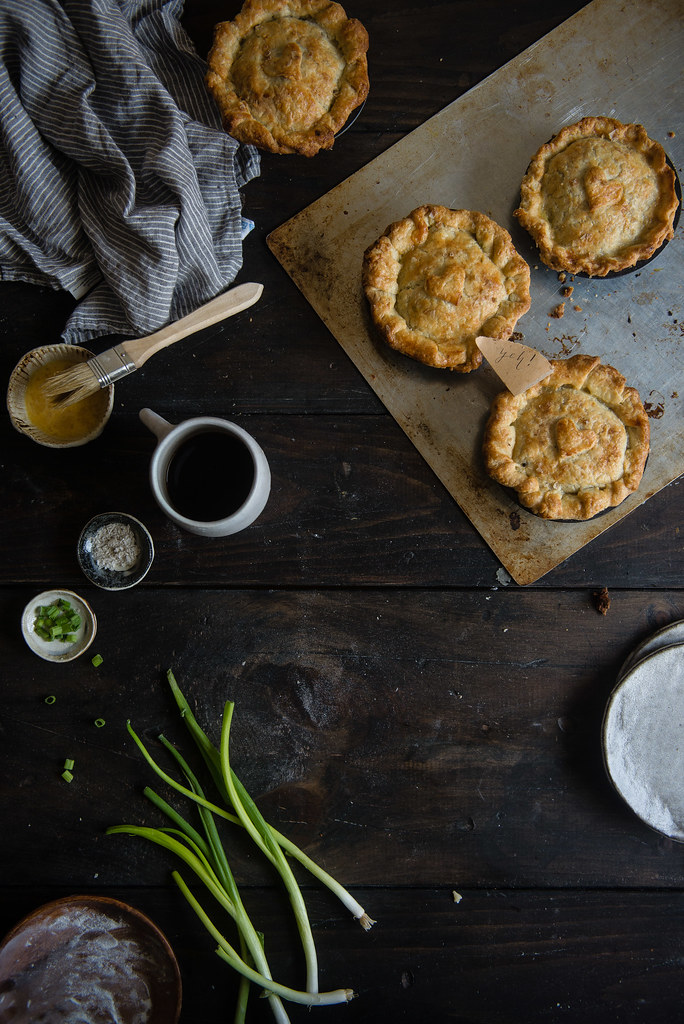 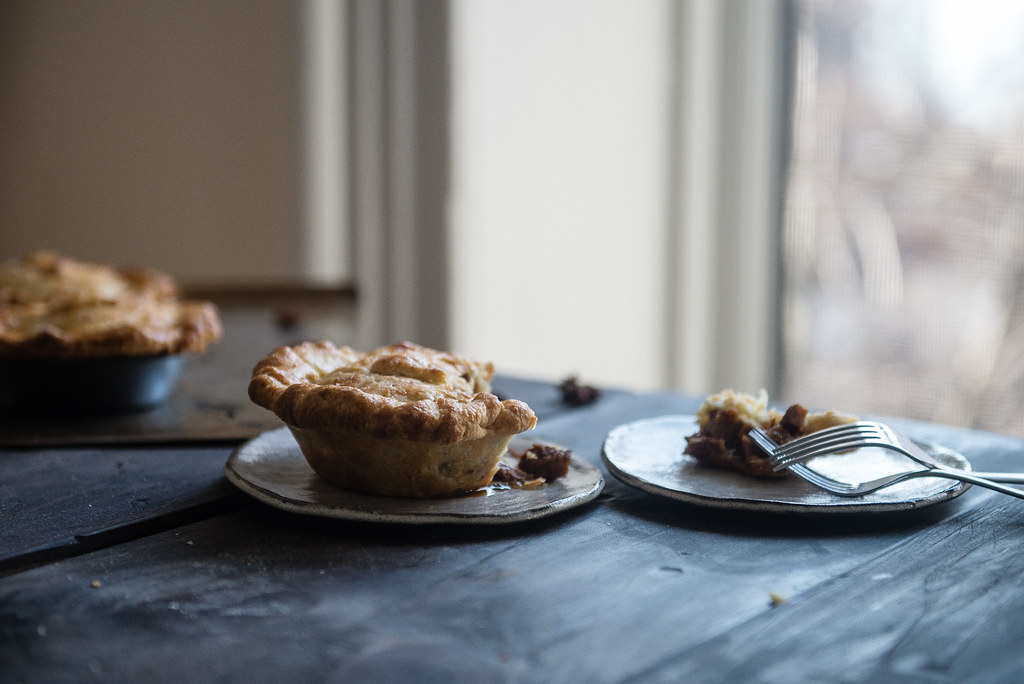 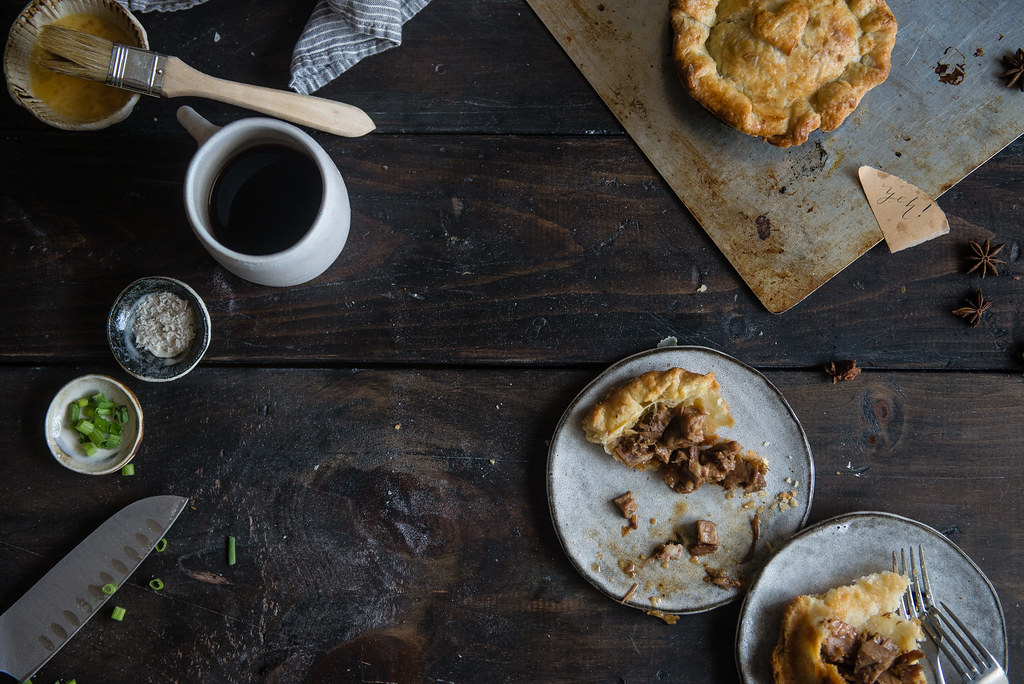 For ease of preparation for the bride and her mother, but also for you, these can be made in several different steps, and all the components can be frozen before assembling, after assembling, or even after baking. I’ve noted where to freeze the individual parts. To bake an unbaked pie from frozen, cover the edges with foil to prevent burning, cut small vents in the top crust, and bake at 425 degrees for 15 minutes, then reduce heat to 350 and continue baking for 20-30 minutes or until golden brown and filling is bubbling. After reducing heat, check often to ensure it doesn’t burn. To bake a fully baked pie from frozen, reheat at 350 degrees for about 30-40 minutes, checking every 5-10 minutes. Do not thaw in either case.

This does yield a fairly rich and heavy pie. For a more balanced dish, you can halve the amount of pie crust dough and make one-crust pies, with the crust on top only.

For these pies, I used these 5-inch Norpro miniature pie pans.

Finally, the cornstarch is included here to thicken the sauce and avoid a soggy crust. It’s not crucial if you don’t have it on hand, and if you plan to make the pork on its own, feel free to omit altogether.