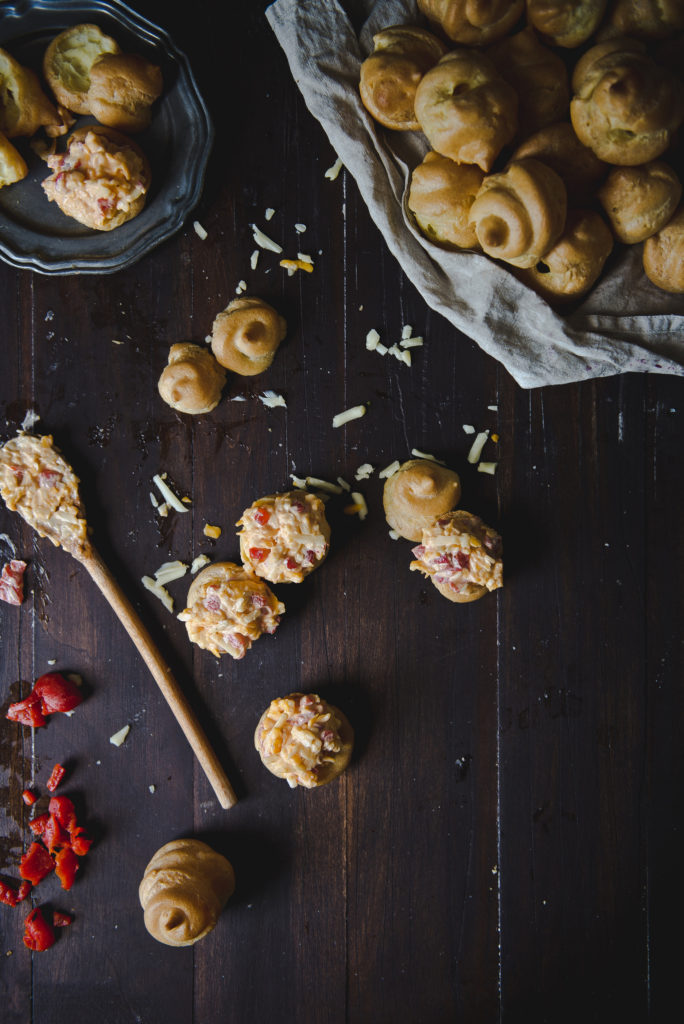 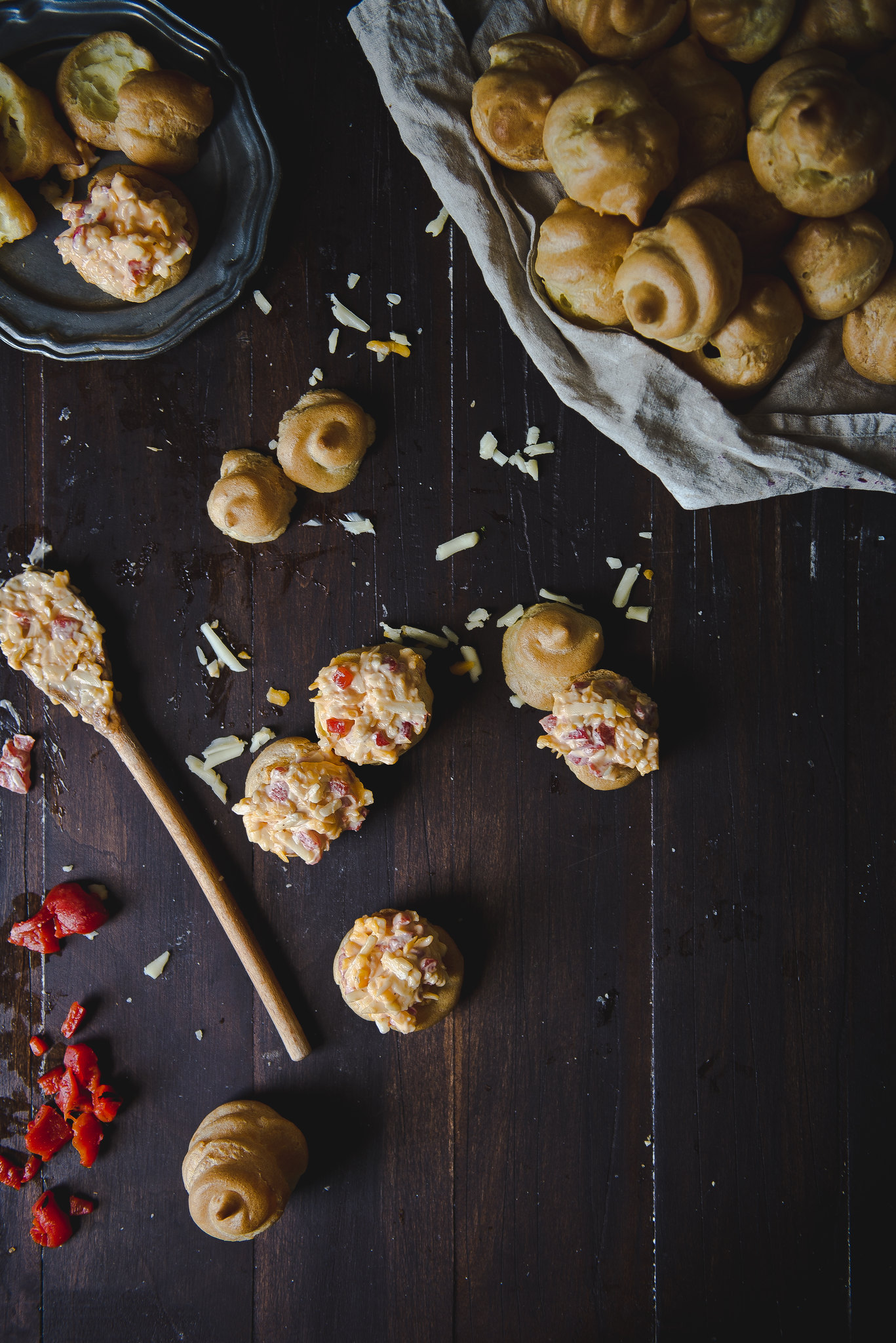 I have kind of a funny relationship with the South. I spent most of my childhood in the land of sweet tea and fried chicken, but while living there, I don’t know if I would have ever identified as “Southern.”  There are some ways in which the South and I just didn’t really get along, and when I left, I figured I’d head out and not look back.  In that funny twisty-turny way that life likes to go, though, since leaving for the Tundra I’ve come to appreciate the South in ways I didn’t anticipate.  I’ve found that there are a lot of things I’ve come to miss, a lot of things that I’ve brought with me, many of which I didn’t even know were Southern until I left.

*I am alarmed by some of the Urban Dictionary definitions of this word. No, guys, it just means fart. 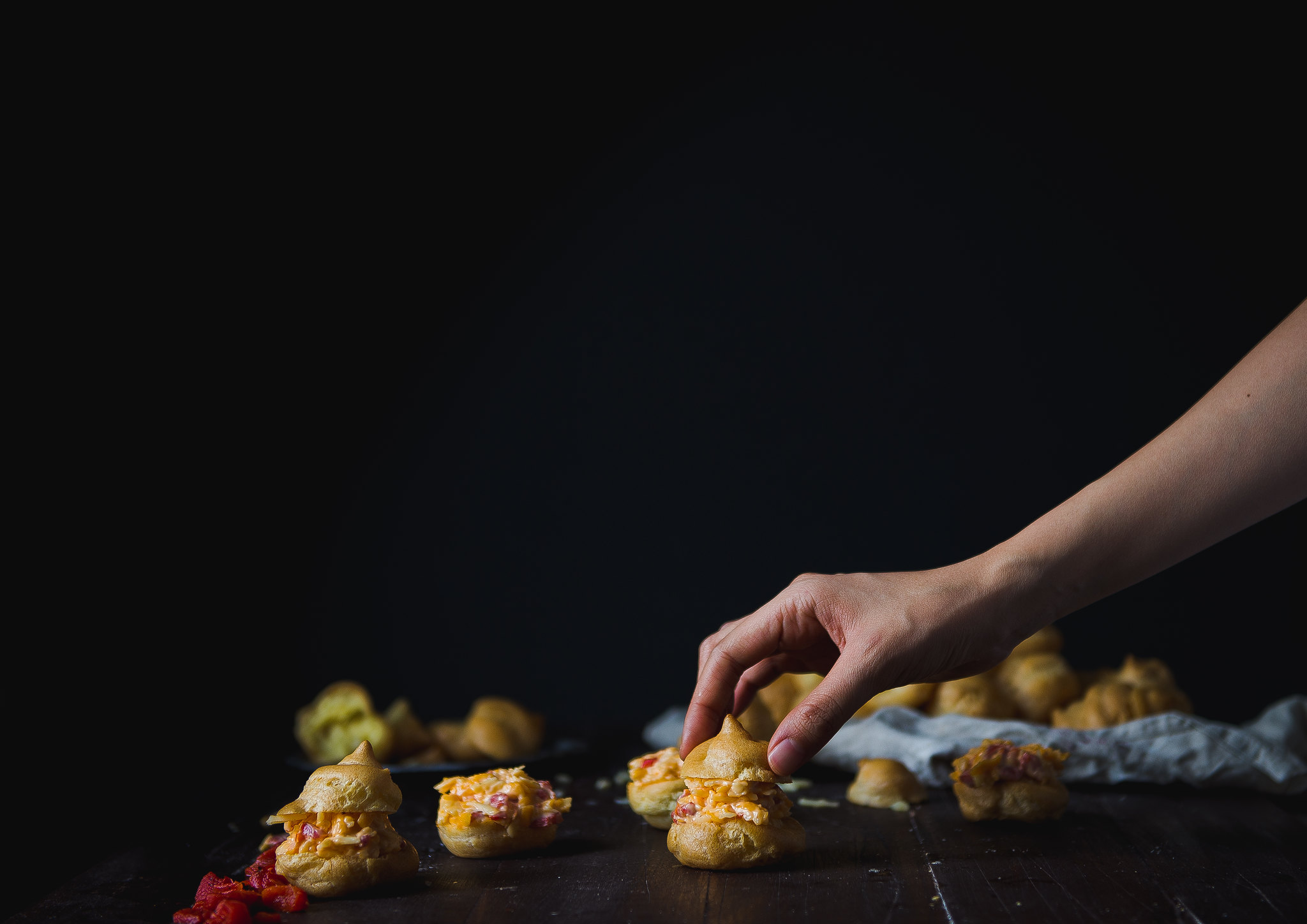 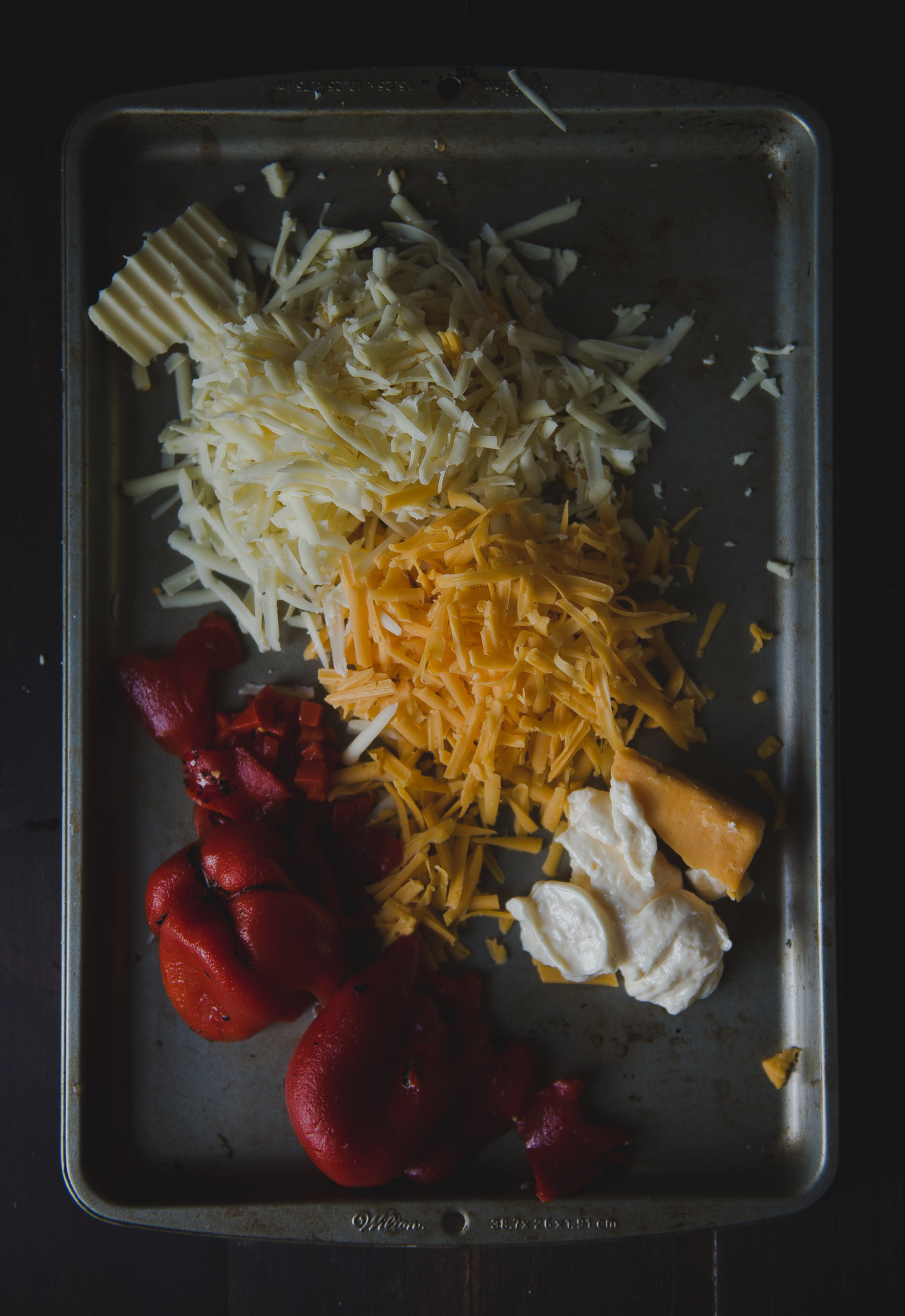 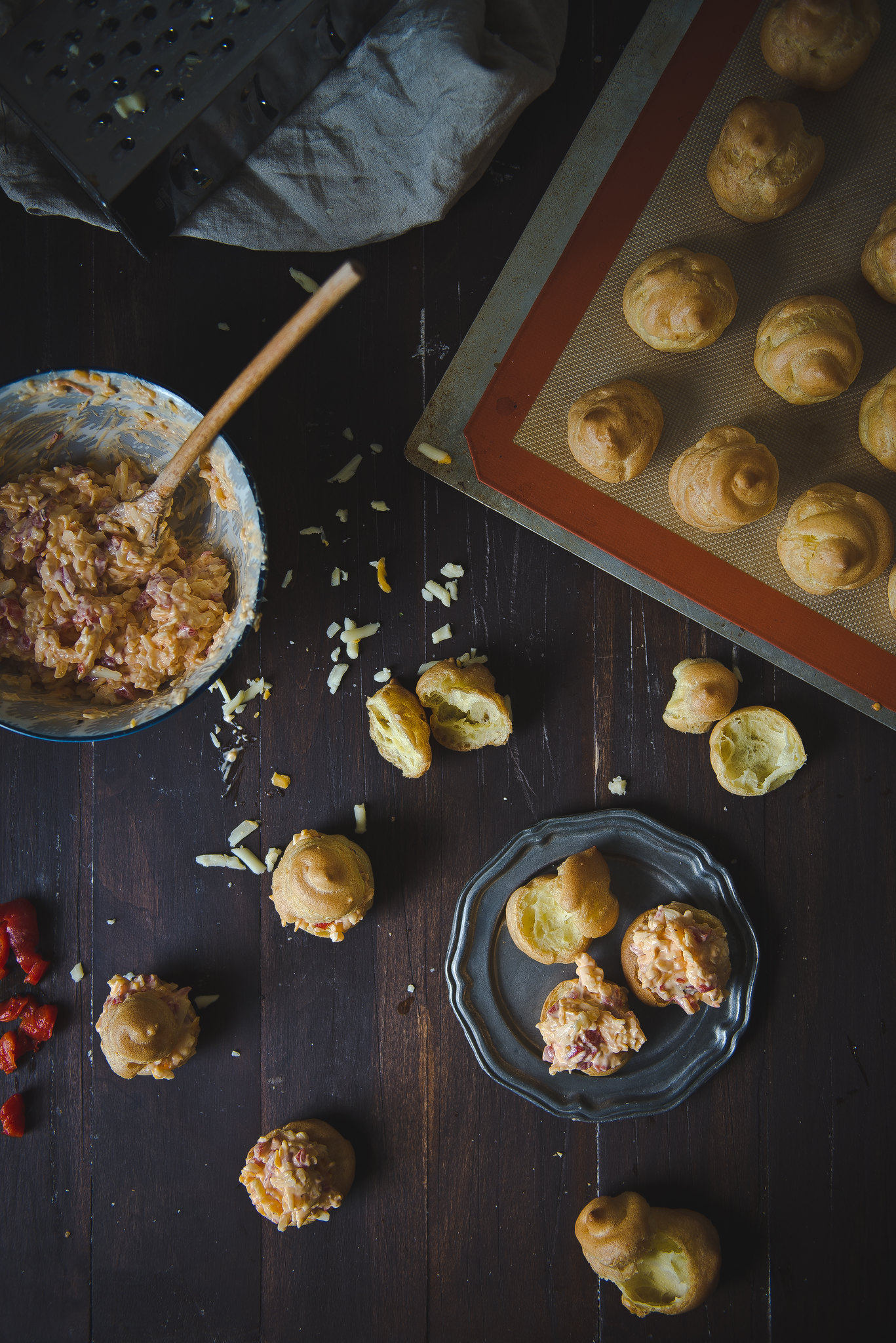 And, more relevantly, pimento cheese. It’s no secret that the one thing I’ve had no trouble embracing about my quasi-heritage is the cuisine. Batter it and fry it, dump a pound of sugar in it, extra mayo, extra butter, please and thank you. When it came to pimento cheese, though, I didn’t even know it was a thing that was Southern, and not merely ubiquitous.  Until my first summer in New York, where I got hit with a sudden craving for a plain old pimento cheese sandwich on white bread — simple enough, until I spent literally hours combing the lower part of Manhattan for a store that sold it.  I was baffled.  And then informed by Google and Wikipedia (my most reliable sources of information) that it is “a common food preparation in the Southern United States.”  Um.  The entirety of the rest of the United States was a food desert.

I kid.  (Partially.)  But I mean, cheese and mayo?  And not only that, but creamy, just barely pungent extra sharp cheddar, paired with the sweet tang of rosy pimiento peppers and a touch of heat from a pinch of cayenne, and married with mayonnaise?  From my perspective, that seems like a recipe for culinary ubiquity however you slice it.  There’s still hardly anything I’d want more than cold pimento cheese and a sleeve of Ritz crackers on a hot picnic day.

So, in honor of the ultimate picnic weekend coming up this week, I thought I’d share a super simple, super traditional recipe for pimento cheese.  It’s kind of beautiful that something so delicious is really so simple — just good cheese, good mayo, jarred pimientos, and a sprinkling of your seasonings of choice.  (Somehow, while pimento cheese itself isn’t readily available, I found jars upon jars of pimiento peppers at my local Key Foods. Holla Goya brand!)  There are a million variations, as I’ve noted briefly below, but I’ve kept mine pretty traditional.  For this  most important ingredient for me, I found (you know, besides everything else) is time — just after mixing, pimento cheese just tastes like cheddar wearing a mayo jacket.  But given an overnight rest, it turns into that sweetly tangy-creamy spread that I die for.  Here, I served it sandwiched in choux puffs (made using this genius recipe by Michael Ruhlman of Ratio fame), but you can do anything you like with it — you could put it in the choux puff and make gougeres (genius), put it in grilled cheese, over hot dogs, or just plain on crackers or white bread (my favorite, personally).

I really think this is too good to be regional.

(Also, if you’re curious, I did end up finding premade pimento cheese on that fateful afternoon — at Trader Joe’s!  I happen to really like their brand, so you should check it out if you want a sampling of the best picnic spread you’ll ever have.) 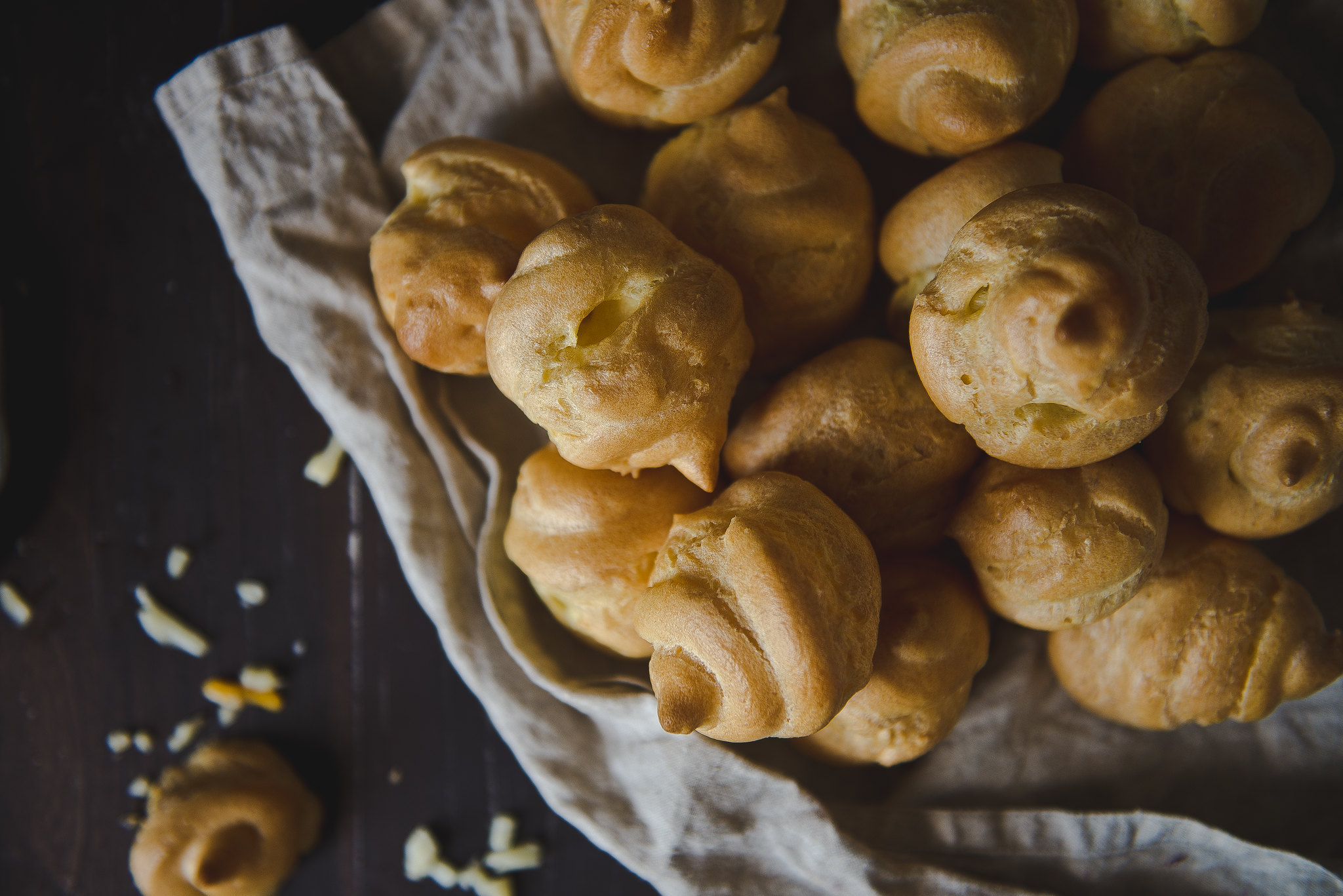 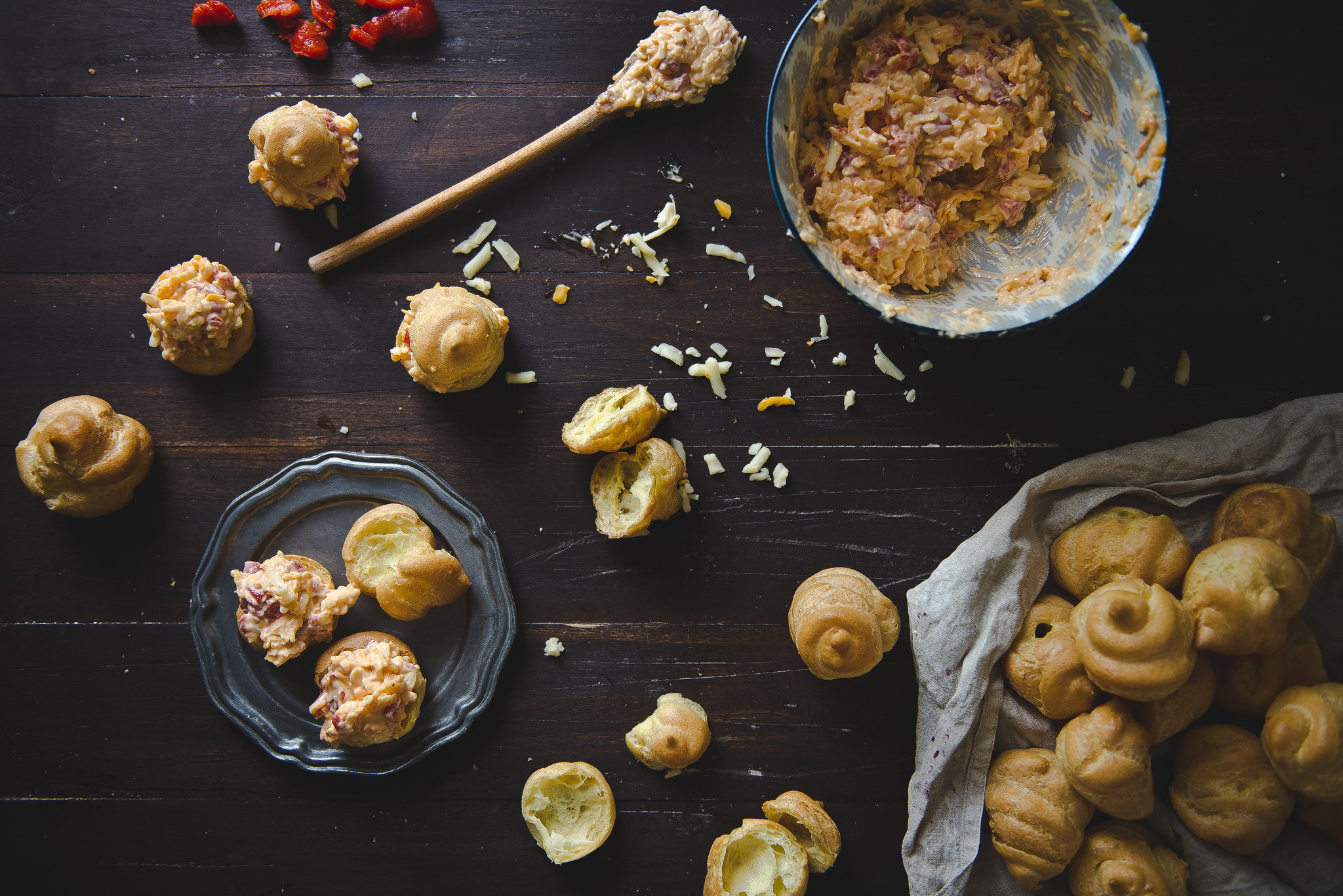 As is very aptly put by the folks over at Food52, you’ll find a million different ways that are “the only way to make pimento cheese” — some add cream cheese, others Worcestershire sauce, minced onions, pickles, celery salt. This is a simple starting point, and makes the pimento cheese I know and love, but feel free to experiment from here.