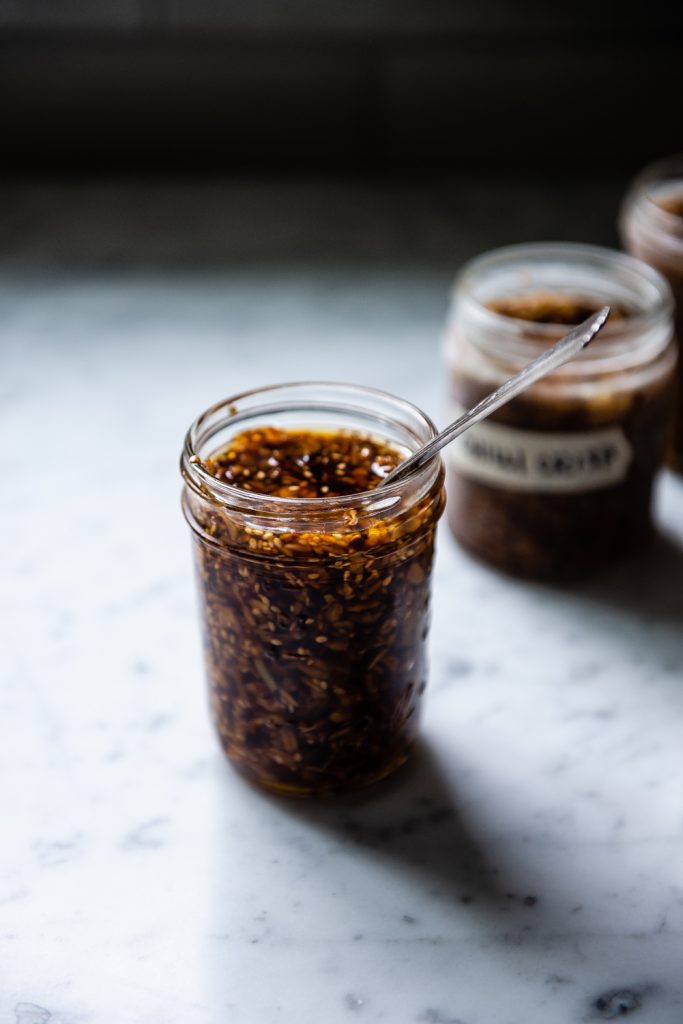 I have a dark secret. The idea of “chili crisp” is one that I’ve always loved in my head, and wanted to love in practice, but every one that I have tried–while delicious–never quite lived up to what I imagined a chili crisp should taste like. There was always just a little something that I felt was missing–the crisp wasn’t that crisp, or the spiciness was a little too ma la, or the crisp wasn’t as deeply savory or flavorful as I wanted, and tasted too much of heat and nothing else. Amid the chili crisp craze, I chalked it up to my own strange personal preference, and assumed that the chili crisp of my dreams simply didn’t exist.

That is, until just under a year ago, when I received a little package in the mail from my vegetable idol genius Hetty McKinnon, and opened it up to find two little vermilion jars–one of her “everything oil,” and one of her chili oat crisp.

If I am about to sound hyperbolic, it’s just because I have no other way to describe how good this stuff is. The slow sizzle of shallots, sesame oil, sesame seeds and garlic give the oil a deep, resounding umami that already sets this crisp apart, but it’s Hetty’s uniquely inventive addition of oats and coconut that truly puts it over the top. The oats and coconut add crunch and texture, but they also add flavor, lending the crisp an earthy nuttiness and that irresistible touch of sweetness that I want in all my savory dishes. Plus, when you make it at home, you can adjust the red chili pepper to give it the level of heat that you prefer in your crisp, and to keep it from dominating if you so choose. The result is so much rounder, nuanced, and flavorful than simply spicy, one of those alchemical flavors that is infinitely greater than the sum of its parts.

Hetty’s chili crisp was so good that I was, frankly, a little bit skeptical that I could make it at home. But on top of all this–it’s easy. All you need to do is blitz up your shallots, garlic, and ginger in a food processor, combine them with everything else in a pot of oil, and let it bubble merrily away until your kitchen smells incredible and the oil is tinged red and full of crisp golden-brown goodness. It makes more than you think you’ll know what to do with, but I just divvy it up into a few little jars and freeze some–and it has never lasted as long as I expect. I’m fully convinced it’s one of the best things I’ve made in years.

The recipe for this magical chili crisp comes from Hetty’s next cookbook To Asia, With Love, which is jam-packed with dozens more recipes just as good. Like all that Hetty does, the book focuses on vegetable-forward dishes that are accessible and easy, but yield incredible results full of flavor. But on top of that, this book is especially close to my heart for the additional reason that it spoke so much to what motivates me to cook, and what my family loves about food. Hetty opens the book with a series of beautiful essays, and by talking about her “third culture”–a struggle for her identity growing up as a Chinese immigrant in Australia, and the eventual “cross-pollination of ideas and techniques that are grounded in [her] Chinese heritage, yet greatly influenced by growing up in the Western world.” That idea is such a personal one, but so emblematic of the experiences of so many of us. It perfectly encapsulates the way that we cook and eat in this family–and, lo, the recipes are literally everything I want to eat.

The book–Hetty’s fourth!–has been out since September in Australia, and after seven long months, it will finally be out on our side of the world on April 6. It’s available for preorder now. I was so tremendously lucky to get a little sneak peek at it, and it’s already a mainstay in my kitchen. I know you’ll love it as much as I do, and I’m so excited to share one recipe from it in the meantime.

Reprinted with permission from Hetty McKinnon’s To Asia, With Love:  Everyday Asian Recipes and Stories From the Heart (Prestel, April 6, 2021).

2 garlic cloves, finely chopped (about 2 teaspoons, or up to 2 tablespoons if you like garlic)

I like to divvy this into three or so small jars (think Bonne Maman-size) and keep the one I’m using in the fridge and the other two in the freezer.

If you’re looking for ideas for what to do with the chili crisp, the short answer is that it can probably go on everything. But to start: On potstickers always, stirred into congee, practically made for biang biang noodles; even just on a fried egg and some rice with some sauteed greens. My favorite thing to do is toss it in a bowl with a big pile of lettuce, rice, and tofu or chicken, shred some cilantro over top and mix it up with a little bit of Kewpie–I could eat that for days. Now that I’m feeling better and able to eat some spicy food, I do eat it pretty much every day. It’s just that great.

Per notes from commenters and my own experience, you may not have a ton of oil in the pot while cooking, especially if your shallots are large.  For me, plenty of flavor comes through from the crisp itself and I prefer a little less oil, but you can add enough oil to cover the mixture if desired.