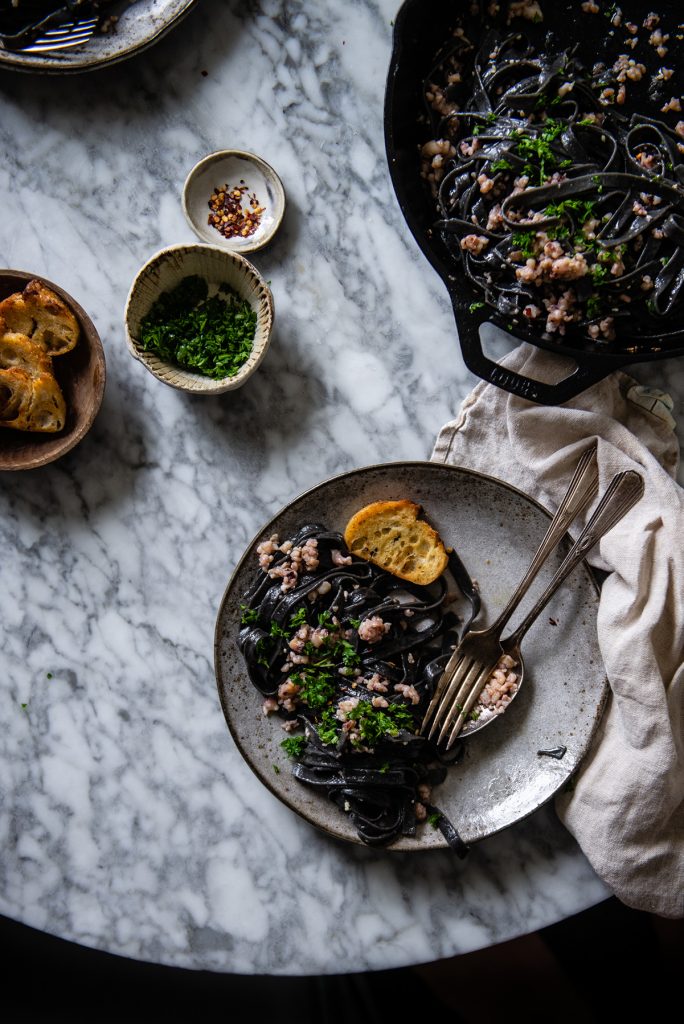 Back when we were wee law students in Cambridge, B2 and I ventured out into the North End for a very Boston evening. We walked the cobblestone streets and picked up cannolis from Modern Pastry in their cheerfully string-tied boxes; we ate them on a bench in a park outside Haymarket Station, all shattering shells and clouds of pastry cream, puffs of powdered sugar dusting the jackets we were already wearing in early October.

On a friend’s recommendation, we had one of the best dinners Boston has to offer at the Daily Catch, a tiny elbow-to-elbow restaurant with wide windows, a bustling open kitchen, and a chalkboard menu covering one wall. I think we must have ordered calamari, and maybe another pasta, but years later the house-made squid ink linguine is all I remember: It was served right in the skillet in a pile of chewy midnight-black strands, and you had the option of having it aglio e olio, alfredo, or puttanesca-style. We chose the aglio e olio, which doubles-down on the seafood and adds ground squid, and with garlicky oil, morsels of squid, and a golden, deeply savory fond clinging to every noodle, it was the kind of dish that umami dreams are made of.

I think there are some dishes that just become emblematic of your time in a place, and that squid ink pasta became synonymous with Boston for us. Although we never made it back to the Daily Catch, we’ve asked each other since then so many countless times, “Hey, remember that squid ink pasta?” B2, who is otherwise no fan of seafood, still orders squid ink pasta in restaurants every now and again in homage.

Seven years later, we are about as far from a Boston date night as you can possibly be. Where it was brisk and snappy already in October in Boston, we’re still all blazing sunshine and short sleeves here in LA. Instead of just us two out at restaurants, we now have a toddler in tow who loves “noolos” but would probably knock down half the tables in the Daily Catch in a matter of minutes if we took him, and a 7-month-old squish whose Hummer-sized stroller would knock down the other half.

But a few things are constant. Fresh seafood, funky anchovy, a grating of good cheese and a lot, a lot of garlic and grassy olive oil will inevitably combine for something incredibly delicious, even if you use dried squid ink pasta you found on Amazon instead of handmade. And a really great dining partner to share it with, whether in a bustling restaurant as baby students with no responsibility to speak of, or sitting on the living room floor with a toddler asking for Sesame Street and more noolos, will make any dinner feel remarkably special.

Cobbled together from a lot of Googling, a quality piece of investigative culinary journalism, and my favorite blank canvas aglio e olio recipe.

⅓ to ½ pound fresh squid, minced or ground in a food processor

½ anchovy fillet, minced (about ½ teaspoon), or more if desired

Squeeze lemon juice or a bit of lemon zest (optional)

If you haven’t already, clean, skin, and mince your squid or run it through a food processor until ground into small chunks.  Set aside.

Heat a 10-inch cast iron skillet over medium heat until a drop of water sizzles on the pan.  Add the oil and one tablespoon minced garlic and cook over low heat, stirring occasionally, until garlic is a very pale golden brown, about 10 minutes.

Increase heat to medium and add the squid and anchovies.  Cook, stirring, just until the squid is opaque, 1-2 minutes.  Remove from heat, stir in the red pepper flakes, and set aside.

Bring 2 quarts of water to boil in a large pot. Add the pasta and 2 teaspoons salt and cook, stirring frequently, until al dente. (The pasta should still have quite a bit of bite; it will continue to cook in the sauce, so I prefer to take it off the heat when it’s several minutes less cooked than I want.)

Reserve 1 cup of the starchy cooking water, then drain the pasta and add it to the squid mixture in the cast iron skillet. Add the remaining ½ teaspoon garlic, Parmesan, and 1 cup of pasta water.  Return the heat to medium and stir until pasta is well-coated with oil and no water remains in the bottom of the pot.

Season with more salt and pepper to taste, as well as a squeeze of lemon juice if desired. Serve, with extra Parmesan on the side and fresh parsley, if desired. Enjoy!

With free time in shorter supply these days, dried pasta was the way to go for us, and makes this recipe wonderfully quick yet special all the same.  If you have the time to make pasta from hand, there are recipes aplenty for homemade squid ink pasta, but I think adding 4-6 teaspoons of squid ink to this recipe would be a great place to start experimenting.

Cleaning and preparing a whole squid was an adventure I was wholly unprepared for and yet wholly enjoyed (wait until you pull out the spine).  Just watch a tutorial if you’ve never done it before.  And if it’s in Italian by someone named Alessandro, even better.