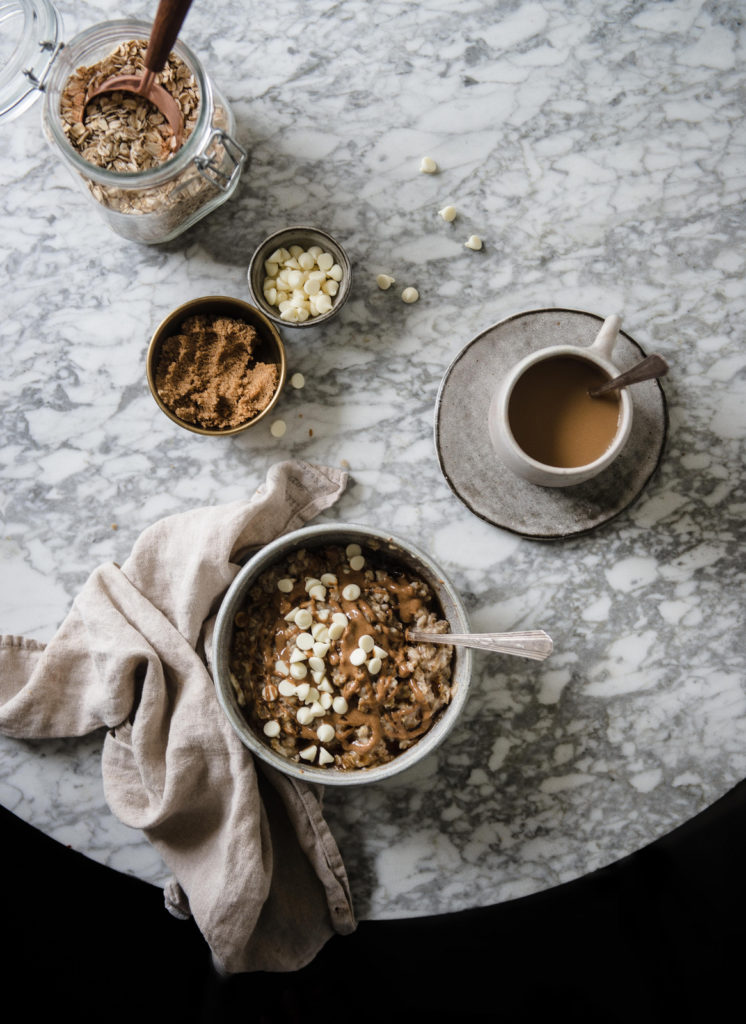 Happy 2017! This is the year that my brother graduates from college (!) and when he first started as a freshman I kept telling everyone that 2017 didn’t seem like a real year that would actually happen. But somehow, it’s here. (Despite 2016’s best efforts.) Our waning weeks of the year were spent eating (of course), avidly watching B2 make a dent in his Christmas present, staying up late with B3 — who is now somehow 2 months old but also evidently has the sleep schedule of a teenager — and seeing how often we could make our chubawub break out into his newfound, mouth-open-wide grin. As much flack as 2016 rightfully got, I’m still a bit wistful to see it go, and our little holiday season, if not quite as quiet as usual, epitomized why I loved it so much — making our new house a new home with our first Christmas, learning our way around a life as a family of three.

So far, we’re eleven weeks in and I’m still nursing our little man, which I love and which bowls me over every time I realize it.  I was skeptical for a couple of reasons about whether I’d be able to exclusively breastfeed, so it’s been the happiest surprise to be proven wrong, and to settle into the comfortable routine that we’ve had for the last few weeks.  It also helps that all the things I’ve been told about or read about to keep milk supply up are super tasty.  My mom recommended runny yolks (um, yes, please, and thank you), my aunt, seafood, my mother-in-law, seaweed soup; Lindsey shared a photo of Oat Mama granola bars that I’ve had a stash of ever since.  To be totally honest, it’s hard for me to tell what works and what doesn’t, especially when B3’s growth spurts come and go and his routines are always changing, but during a couple of his especially fussy patches, a combination of some or all of these helped ease my worrying about whether he was getting enough to eat.

This flax oatmeal came about when I realized that most of the galactagogues I read about could be tossed into a quick, comforting breakfast (one that also fits neatly into my “How to Continue Eating Dessert But Disguise It as Healthful, Kind Of” January diet).  I’m not sure anyone really needs another recipe for oatmeal (not that that has deterred me in the past) but I’m particularly fond of this one.  It started out with just almond butter stirred into oatmeal, sometimes with a barely cooked egg at the end as per my mother’s advice.  But when I discovered that a tablespoon of flaxseed meal thickens up oatmeal nicely, that went in too; a sprinkle of brewer’s yeast blends in inconspicuously, and if anything, added a little bit of the saltiness that normally comes from a pinch of salt.  Toasting the oats in a glug of coconut oil adds a nutty note that complements the almond butter, and melting a handful of white chocolate chips in at the end makes the oatmeal feel happily like dessert — and January is for Disguised Desserts, remember?  I like this because it fits neatly into one of those rare pockets of time between feedings and changings and laundry, and whether or not it works like it’s supposed to, at the end of the day (or the beginning, as it were) it’s filling and nourishing but still feels like a treat.  For any mama out there who’s nervous about breastfeeding like I was, I hope this comforts you too.  Lots of hugs and oatmeal to you! 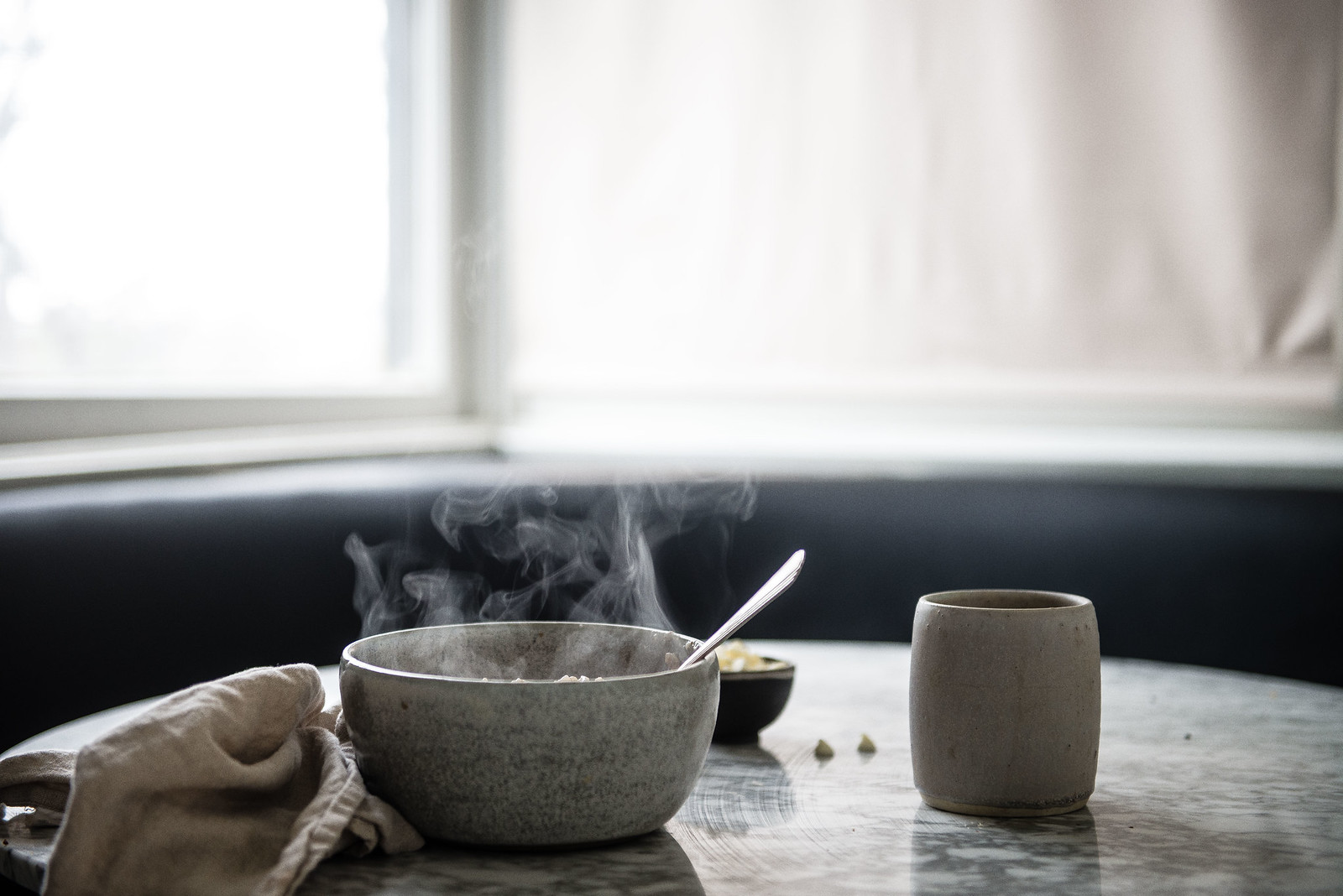 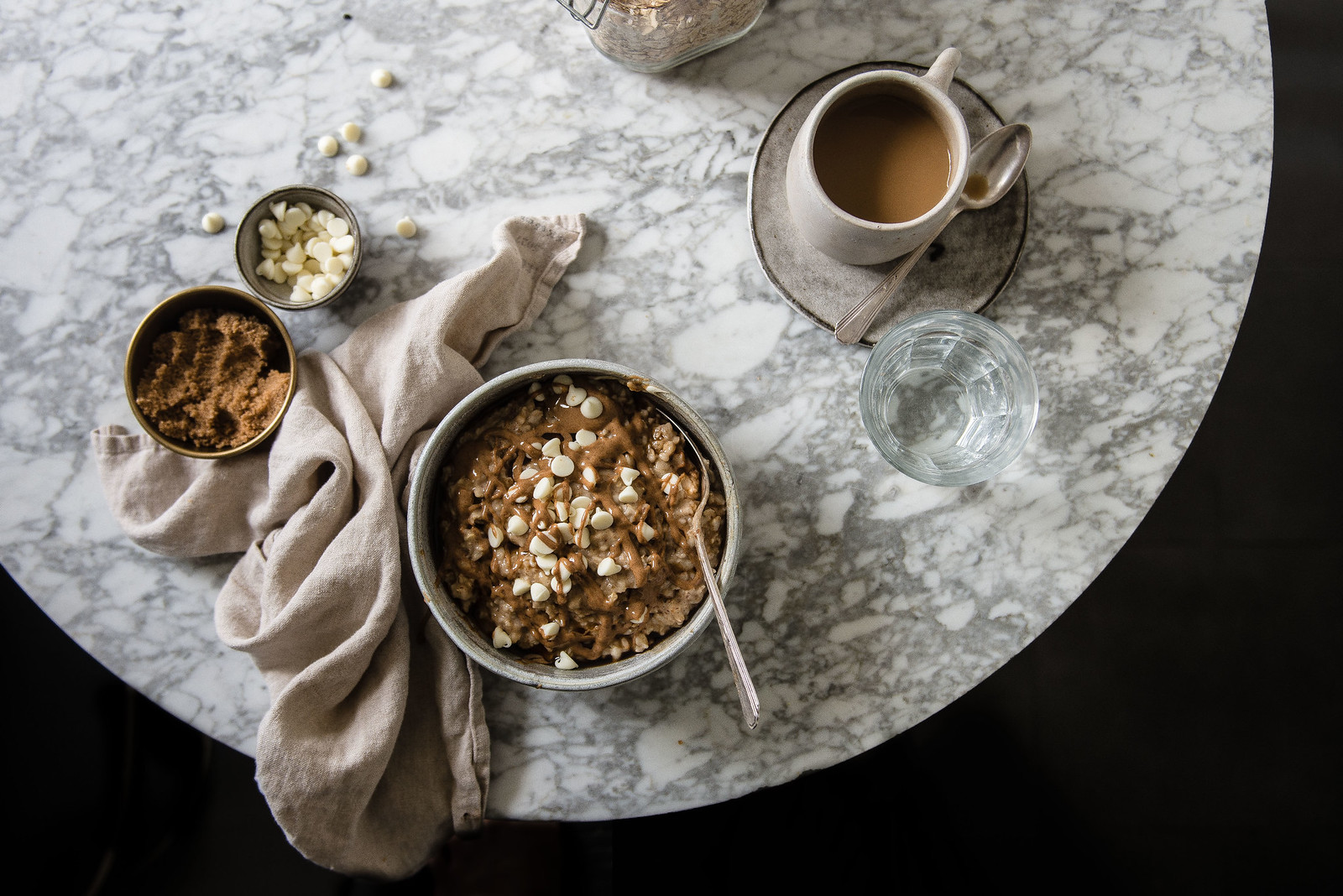 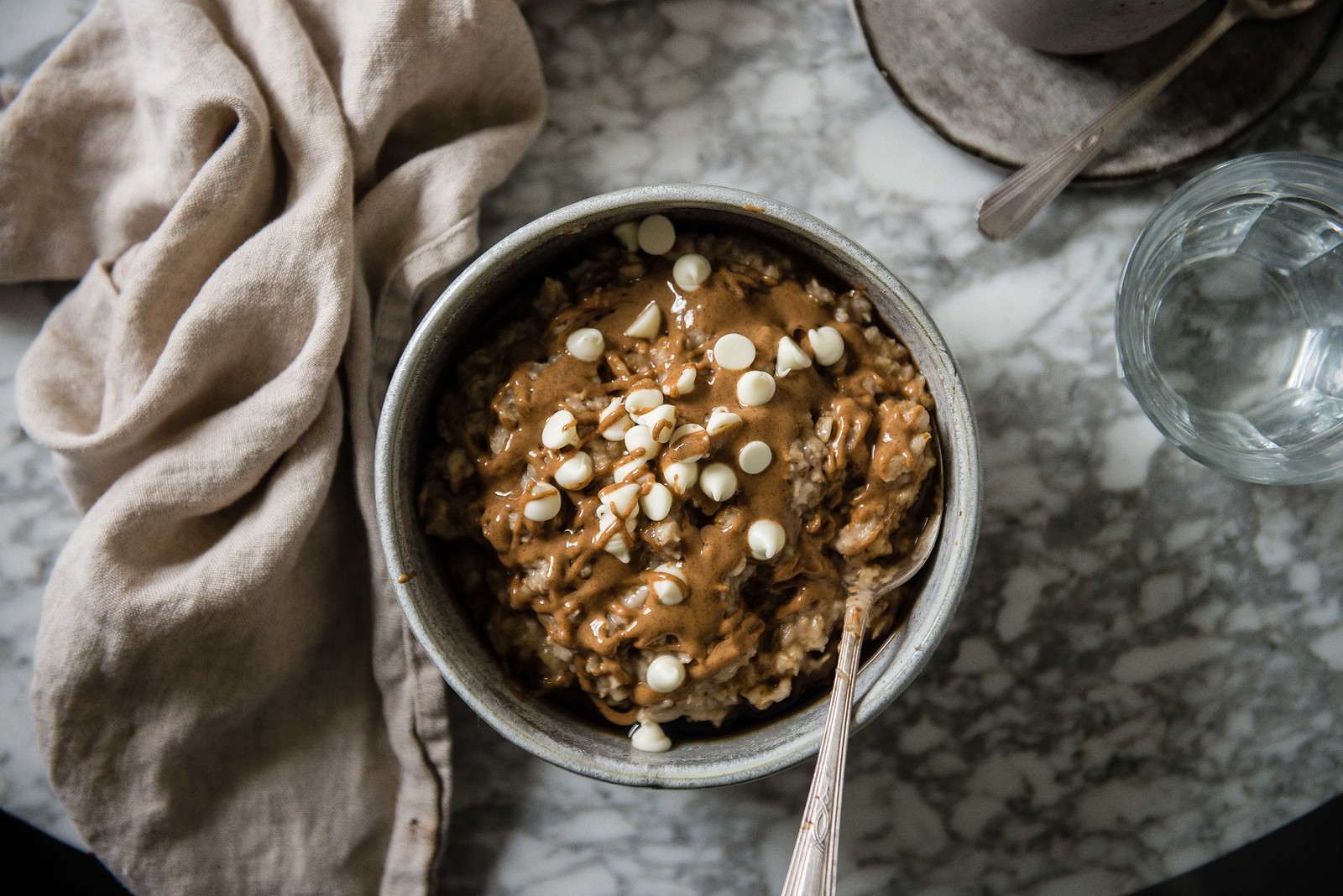 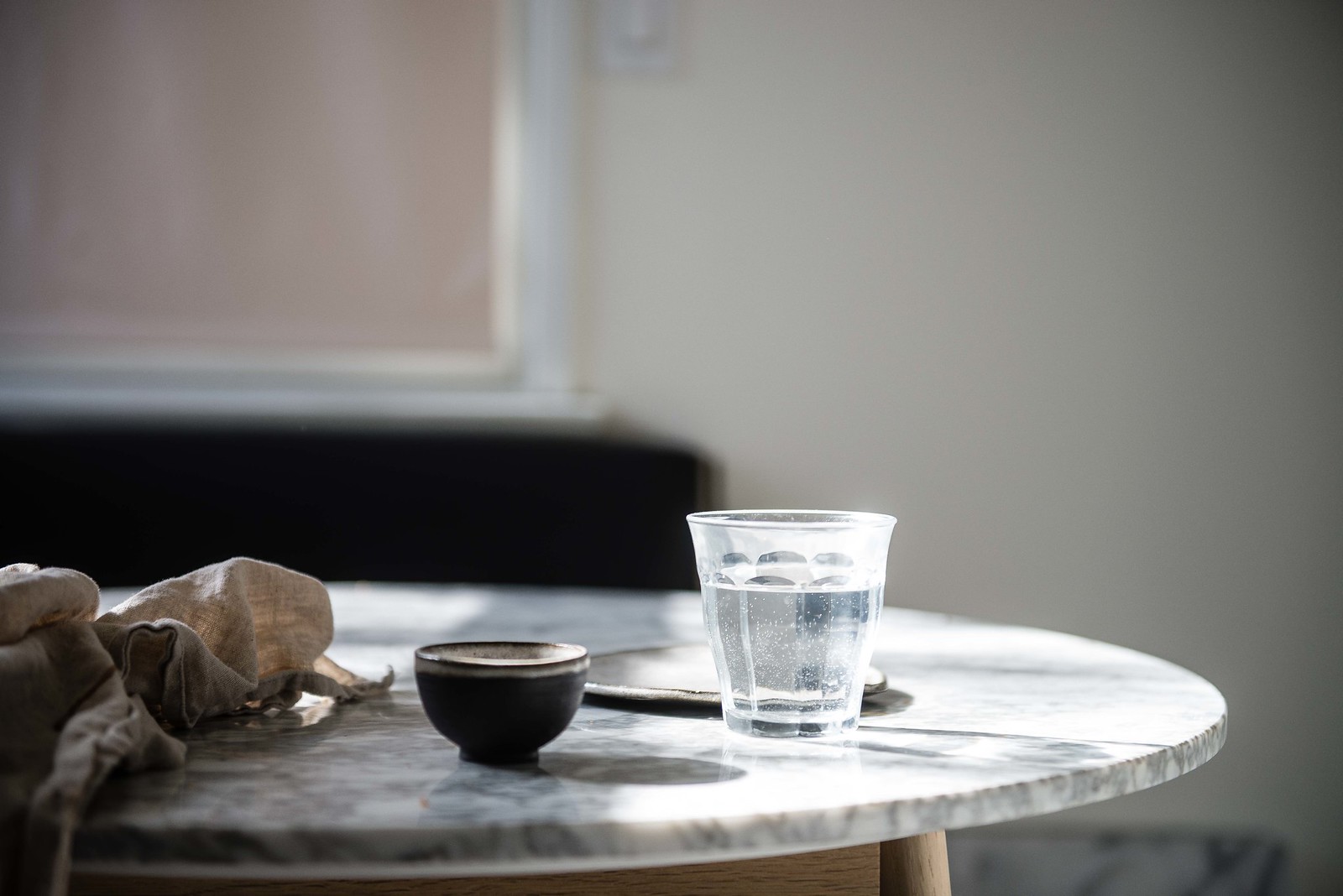 I like my oatmeal on the thicker side; if you prefer yours thinner, it can be easily thinned with a few tablespoons of water or milk at the end, before serving.

If you like, you can make a large batch of this and keep it in the refrigerator for an even easier breakfast, heated up in the microwave for a minute or so. It will keep for about a week.

The flaxseed meal can be replaced with one egg, added in the same step. The oatmeal will be slightly thinner.