I think fried rice may have been one of the first things I learned from my mother and grandmother in the kitchen.  I imagine it must be like Sunday gravy in that every family has their own little way of doing things, though I don’t know that ours was so much a heirloom recipe as just an easy, quick, and comforting way to get food on the table:  for us it always began with eggs and a generous pinch of salt, whisked vigorously with chopsticks and scrambled into small wisps in a screaming-hot wok.  These were set aside to make way for diced white onion, sauteed until translucent, green peas, most often straight from a bag in the freezer and thawed in the wok, and some form of cooked, diced meat (usually, in a moment of fusion before fusion’s time, bits of deli sliced honey ham), before it all got stirred up with rice, salt, and pepper, to be kept warm in the wok over low heat, crackling softly, until a crispy crust formed on the bottom and everyone got seconds, thirds, and fourths.

All the idiosyncrasies to a family staple like fried rice always makes me so excited to see how someone else might do things, and that’s never more true when that someone is Molly Yeh, and that descriptively named, allium-happy recipe is one from her new cookbook!  Molly on the Range comes out in a few scant weeks on October 4, and is full of everything that her blog has always been:  recipes that are as joyful, fun-loving, and vivacious as their creator, with the beautiful photography, peppery prose, and even hand-drawn illustrations to match.  There’s schnitzel bao and dukkah donuts, homemade Funfetti cake and Asian scotch eggs.  It is what I love — when food is a reflection of self.  And in this case, self is happiness and sprinkles.

There were many things to endear me to this version of fried rice, both because it is familiar in ways and very different in others.  I love that it also leaves the bottom to crisp (though in this case, my pregnant brain may or may not have forgotten about it and let it go a bit too long at a bit too high heat, don’t be like me) and, in line with my personal preference, has a very high ratio of Other Stuff : Rice.  But, unlike any fried rice I’ve ever made, the Other Stuff is almost all alliums of different sorts; those alliums are sauteed in butter rather than my usual oil, which lends a creamy unity to the rice that is wonderfully comforting.  Perhaps my favorite thing about this fried rice, though, is the full tablespoon of ginger that goes in — while I would never have thought to add it before, I think I might be sneaking finely grated ginger into all my fried rice from now on, because it adds a bright vivacity to the fried rice that is refreshingly new and wholly addictive.  It’s the same vivacity, I think, that infuses all of Molly on the Range.

Biggest congratulations to you, Molly!  I couldn’t be more thrilled to have this cookbook brightening my kitchen. 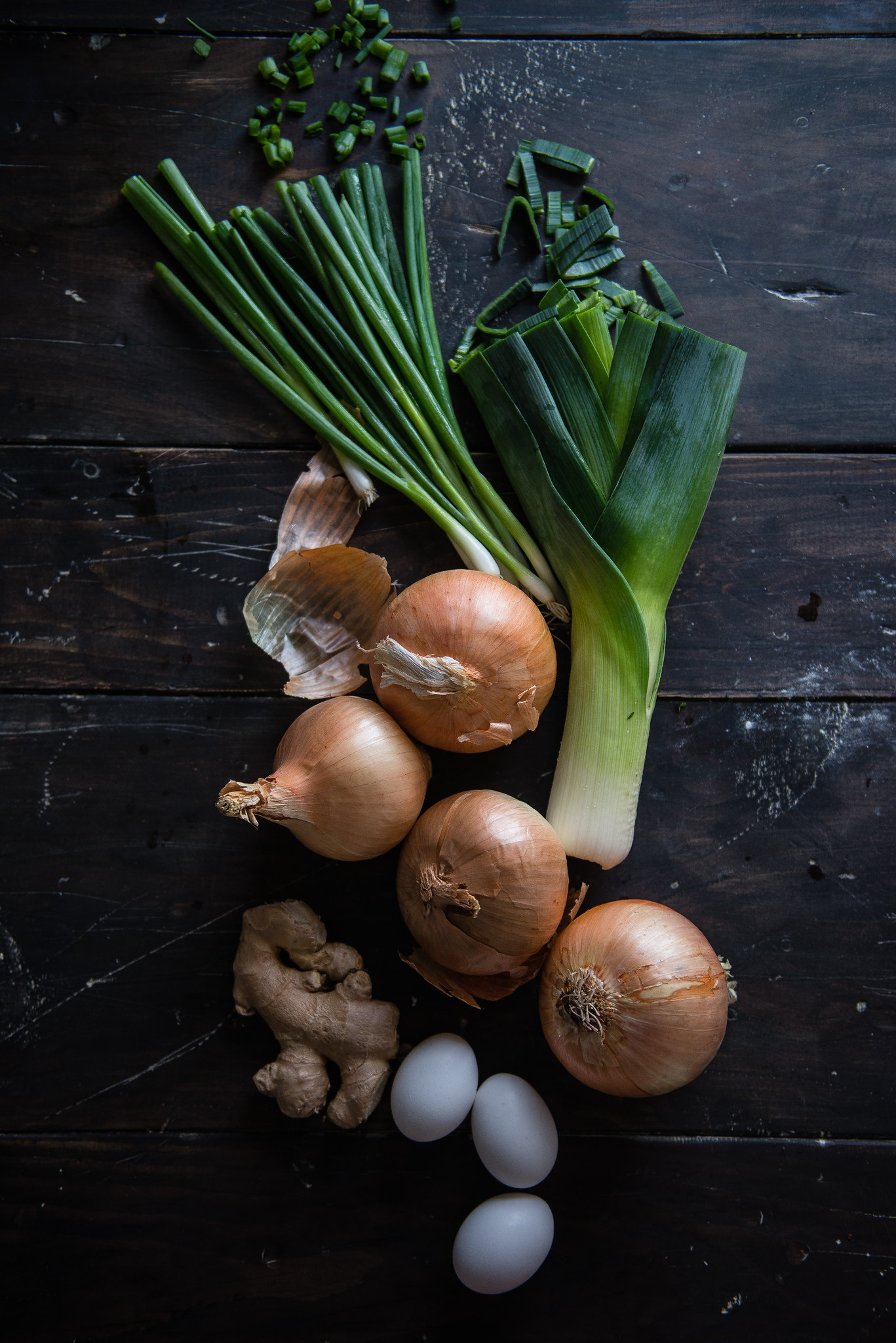 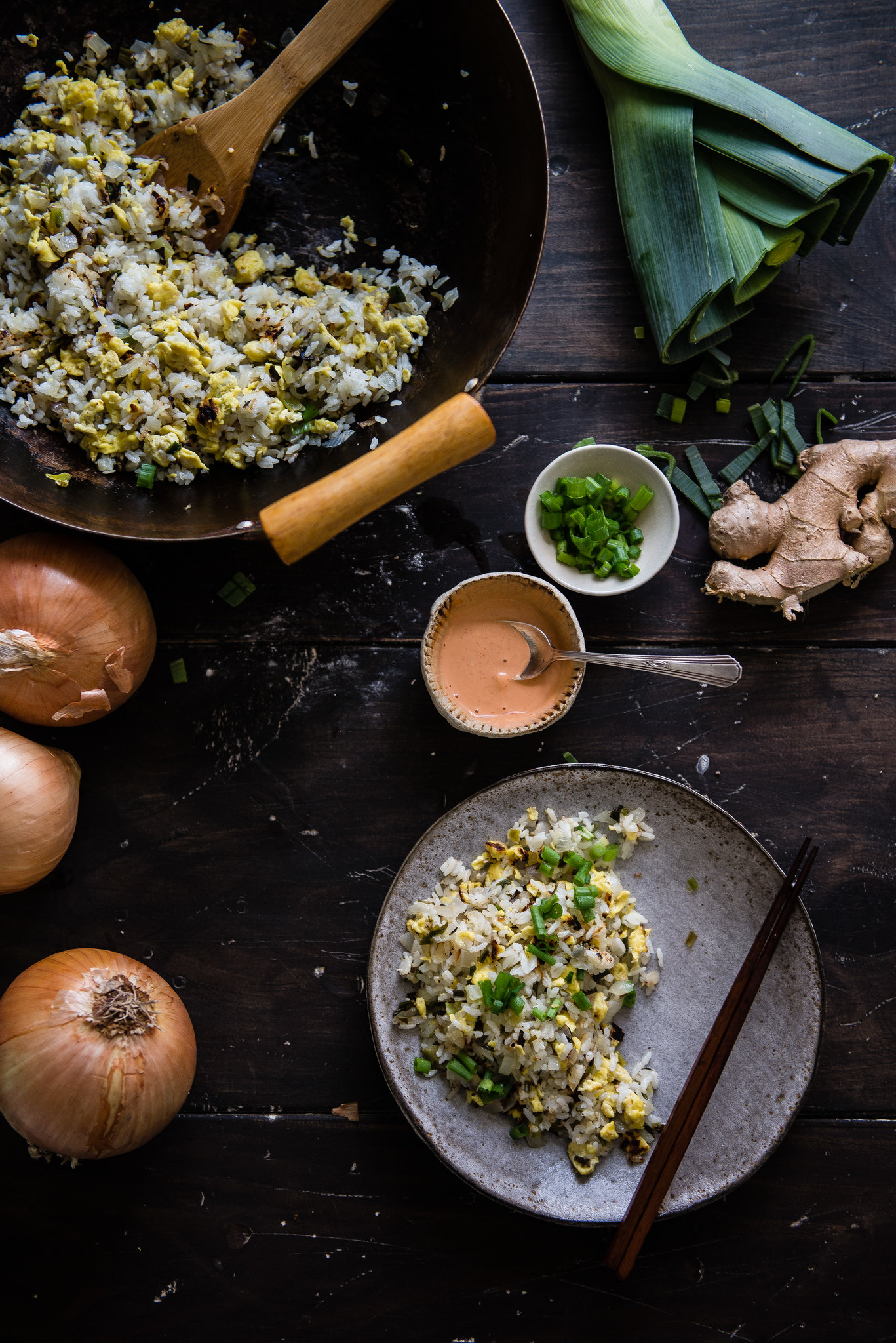 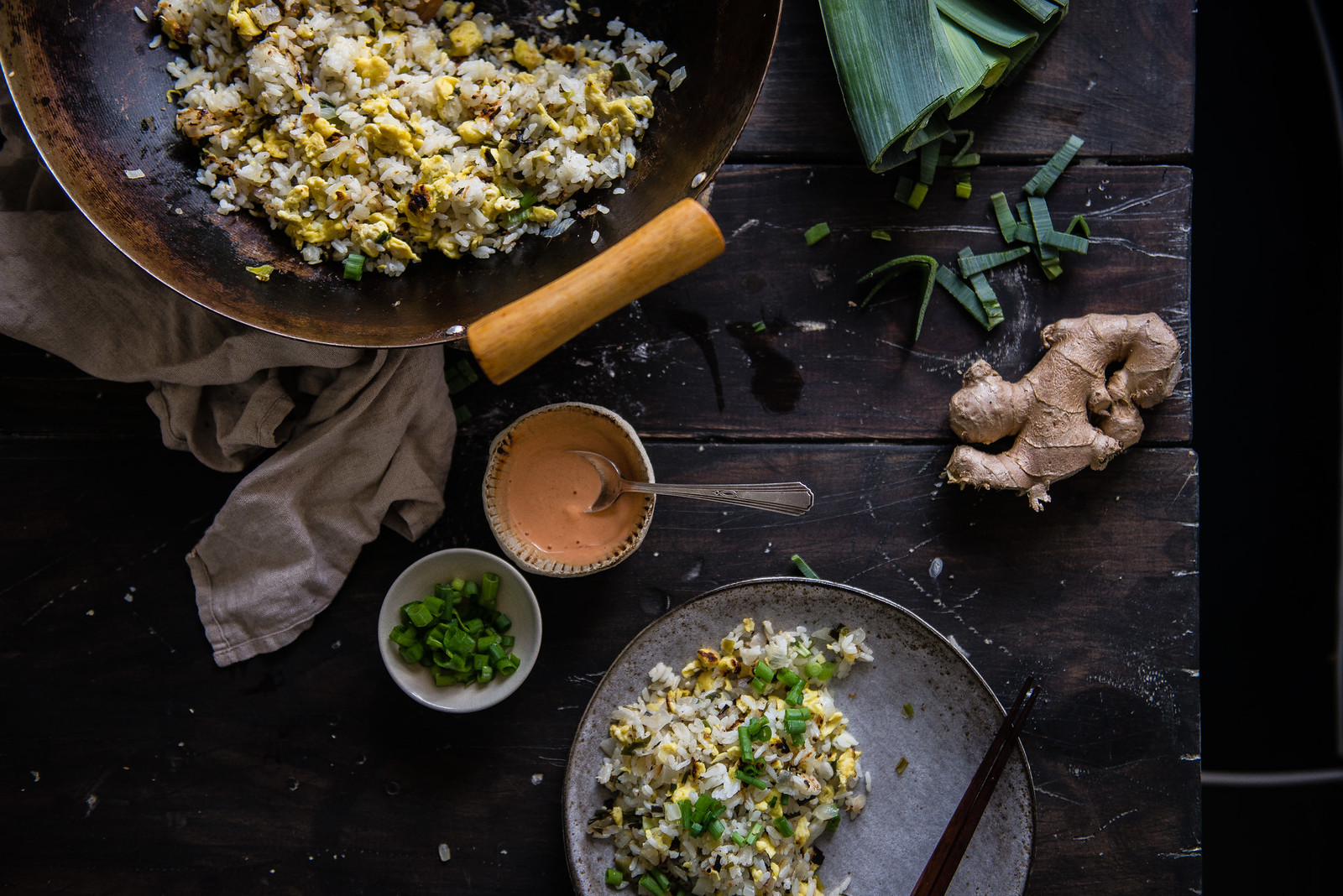 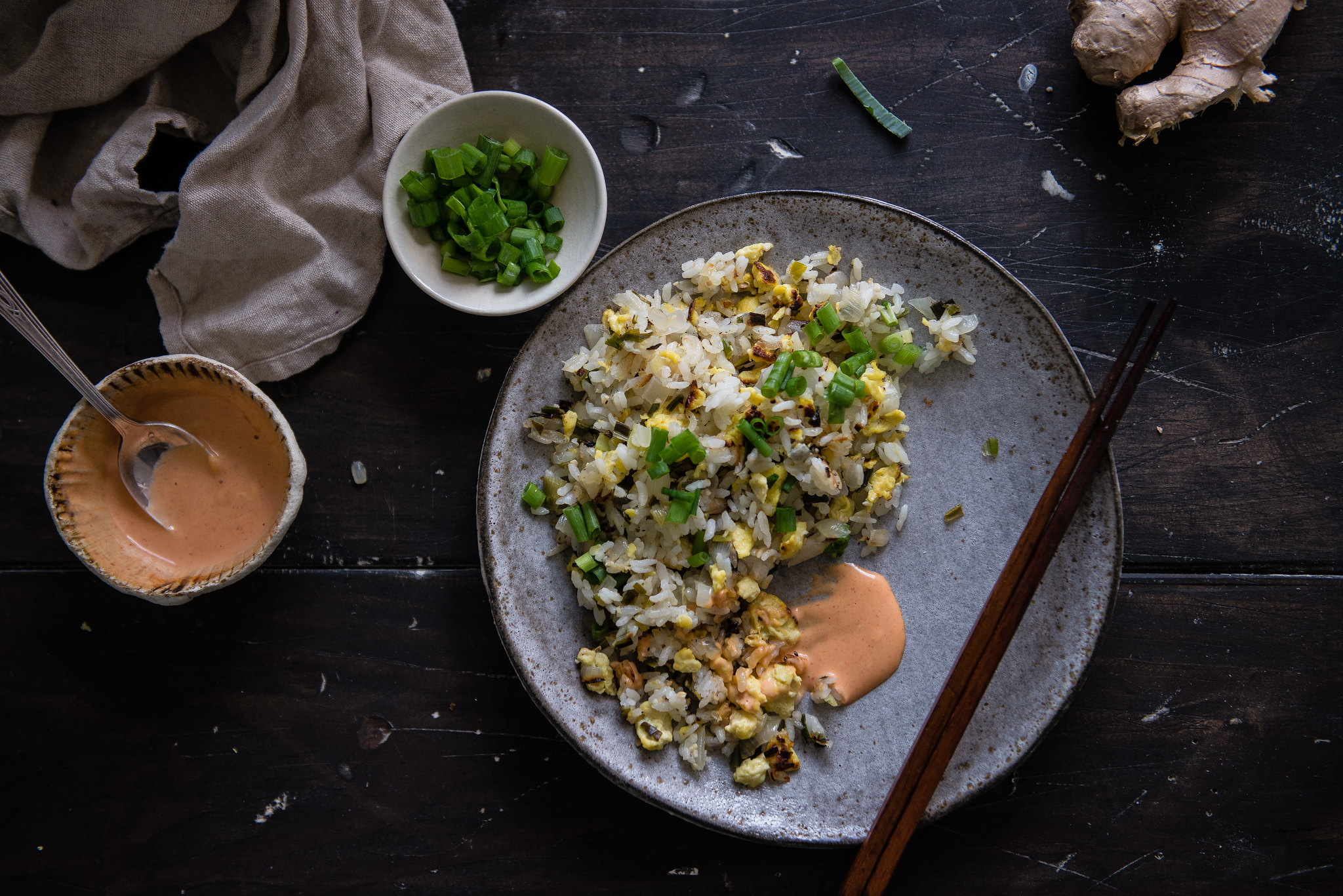 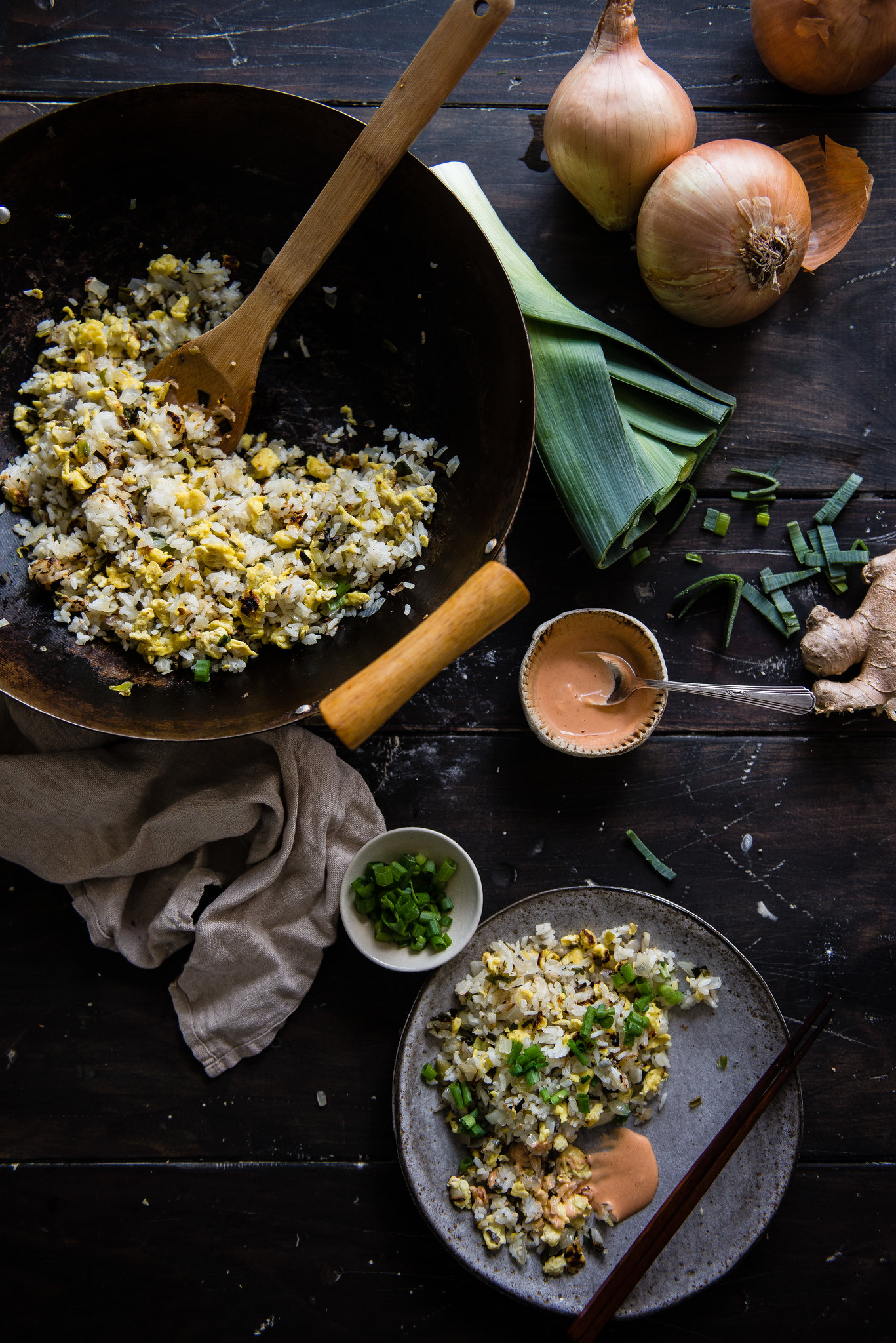 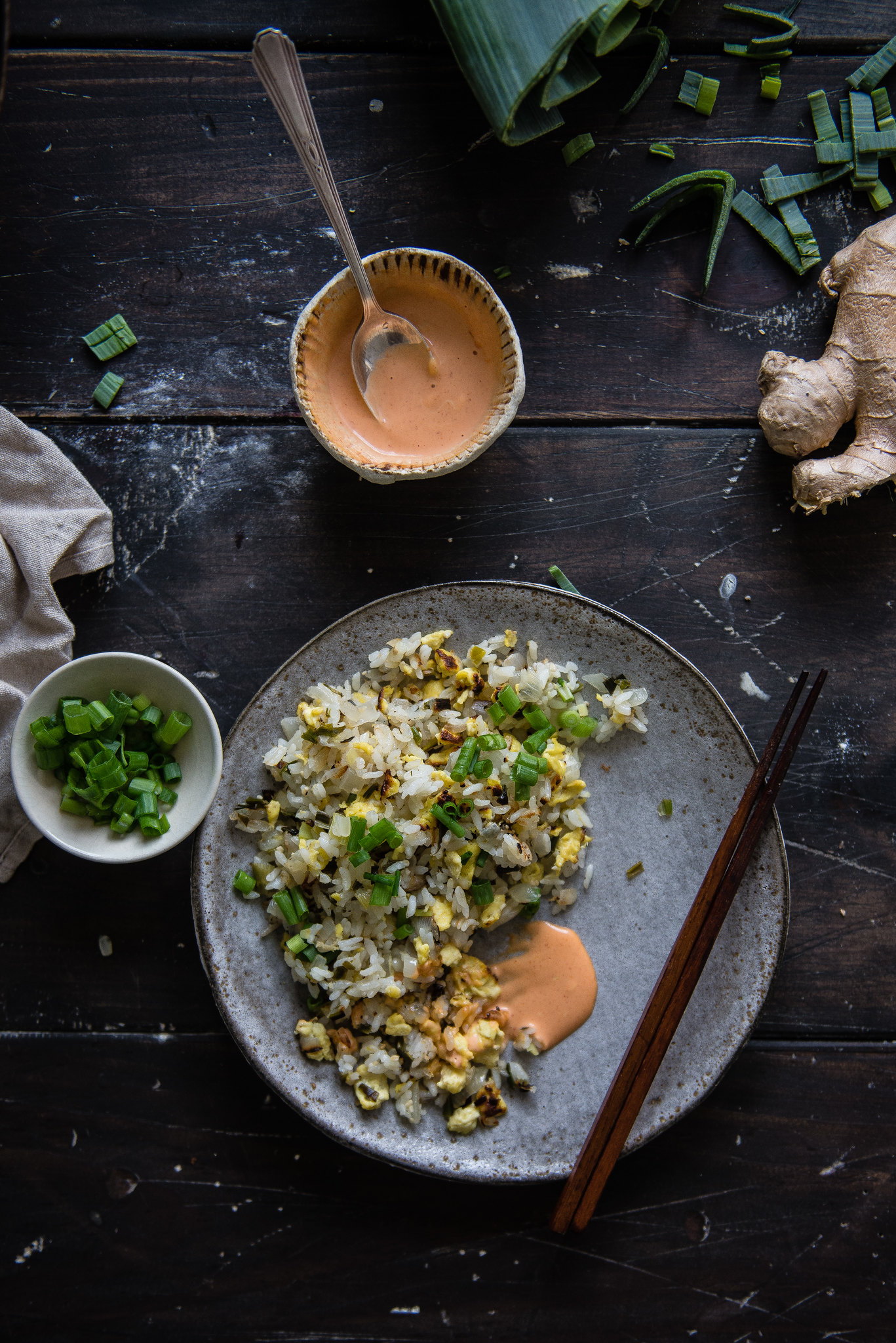 All of the Alliums Fried Rice, from Molly on the Range

Reprinted with permission from Molly on the Range: Recipes and Stories from An Unlikely Life on a Farm, by Molly Yeh (Rodale 2016).

I used 2 cups diced white onion, 1 cup sliced scallions, and 1 cup finely sliced leeks, to great effect; I also added just a smidge more rice, about 3 cups, to suit our personal preferences. In scrambling the eggs, I simply scrambled them into small pieces in the pan out of habit, rather than chopping later. I imagine you could chop them after or scramble them small in the pan and either way will work.

If you’d like a bit more protein in your fried rice, I love Alana’s iteration of Molly’s fried rice, which adds bacon and was my first introduction to the magic of this allium-heavy dish. I’ve also added diced chicken and (my family’s go-to) ham, and I think some shrimp would be fabulous, too. It’s hard to go wrong with this.

Finally, if you are fallible in the same way as me, you may want to keep an eye on the bottom of your rice and decrease the heat as needed, particularly if your skillet or wok has a thinner bottom. Thick-bottomed skillets like cast-iron will work better for a gradual crisp crust.