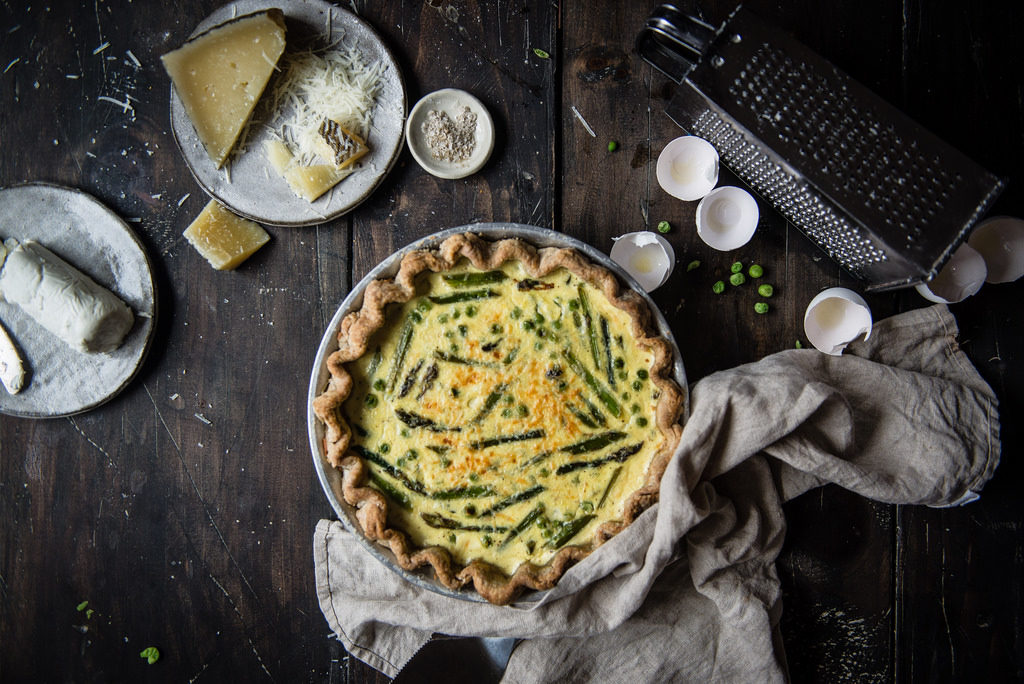 For the first twenty-two or so years of my life, my experience with quiches was limited solely to the miniature frozen variety — the ones from Costco that came in boxes of half Lorraine and half Florentine (or, in my mind, half yellow and half green), most often bought for my mother’s potlucks or just for late-night snacks, pale and anemic until you popped them in the oven and warmed them to golden life. (Or microwaved them, in which case they stayed pretty anemic but still tasted delicious.) There’s plenty to love about those already (I still love them, no shame) — tiny bites of buttery crust, giving way to creamy, salty-savory middles with a hint of salty bacon or spinach.  So it probably goes without saying that when I finally tried a quiche in all its full-sized, deep-dish glory from a Cambridge bakery a couple of years ago, thick and substantial, stippled with caramelized leeks and smoky from thick-cut bacon and good Gruyere, I was more than sold.

The first quiches I made at home were as close a replica to that one as I could find (and it’s easy enough to change this recipe to that one; I put some cursory notes below in case you want to and so that I don’t bait and switch any bacon-lovers), but because I’m impatient for the reluctant spring that still won’t come (or at least stay) here in New York, this one is my wishful-thinking spring rendition. (I know, I’m turning into a broken record on this front.) The week-long stretches of cold, gloom, and rain notwithstanding, the spring produce is happy and green and tender, so this got a bundle or two of perfectly slender asparagus and some green peas, along with crumbles of my favorite Vermont Creamery goat cheese and some Manchego for good measure. A little bit of white whole wheat flour (more on that soon!) gives the crust an extra nuttiness that goes well with the Manchego and adds a flavorful body that I liked, and, though I didn’t here, you could always throw in some crisped-up bacon or prosciutto for more salty variety. And lastly, I experimented a little bit with replacing cream in the quiche with Greek yogurt — you could totally do this if you want, and I found it to work fine (though slightly wigglier when it was fully-baked), but for me personally, there’s just nothing like cream for a satisfying egg-y brunch.  Here’s to plenty of those this spring. 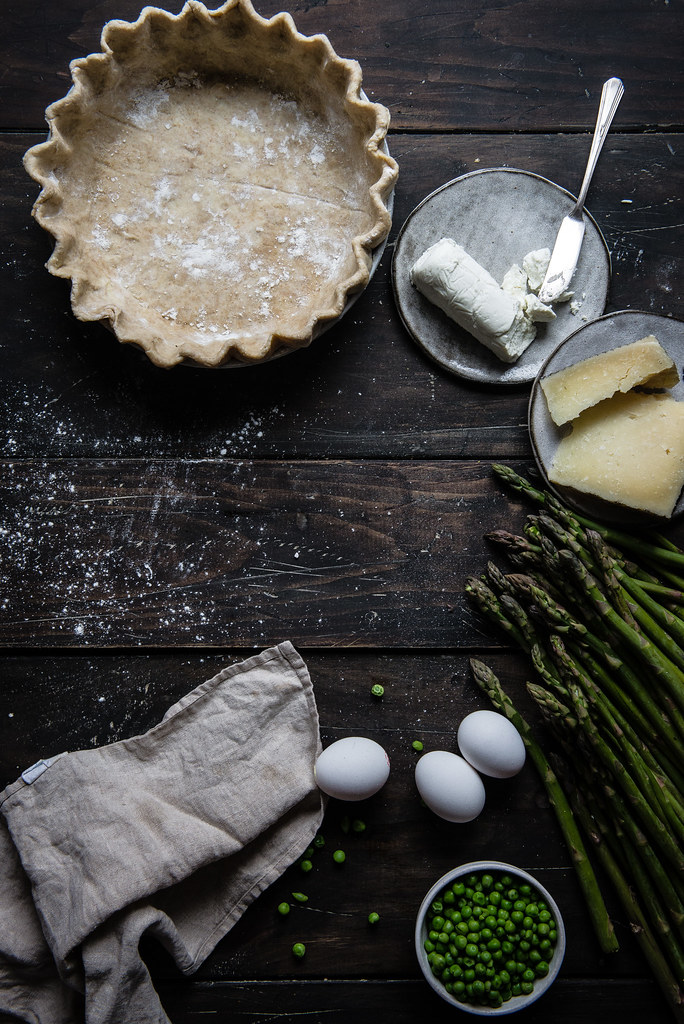 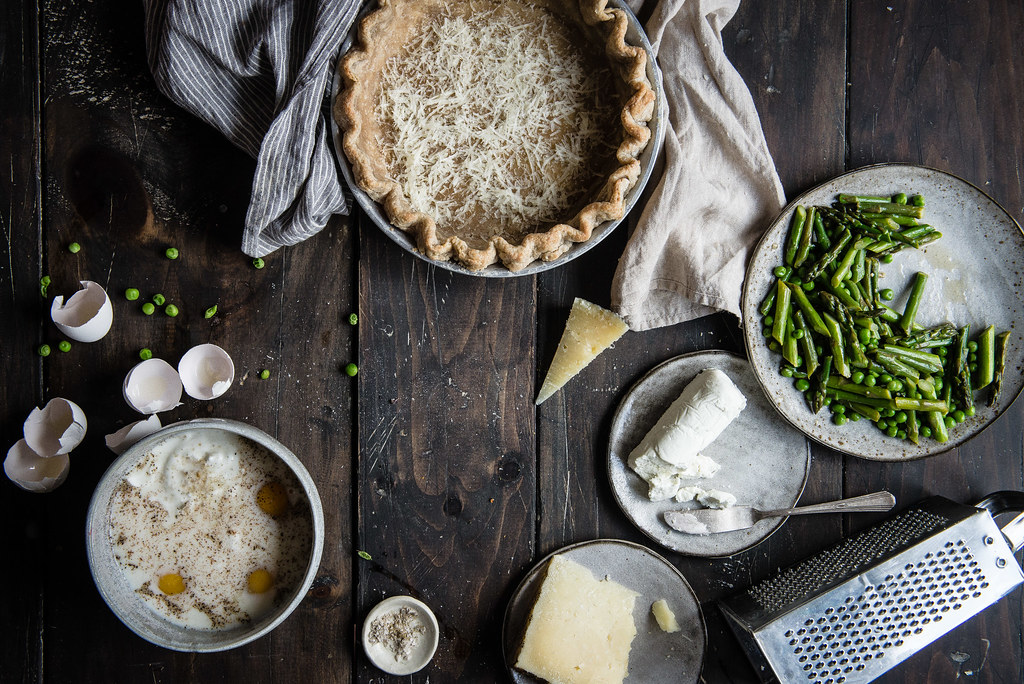 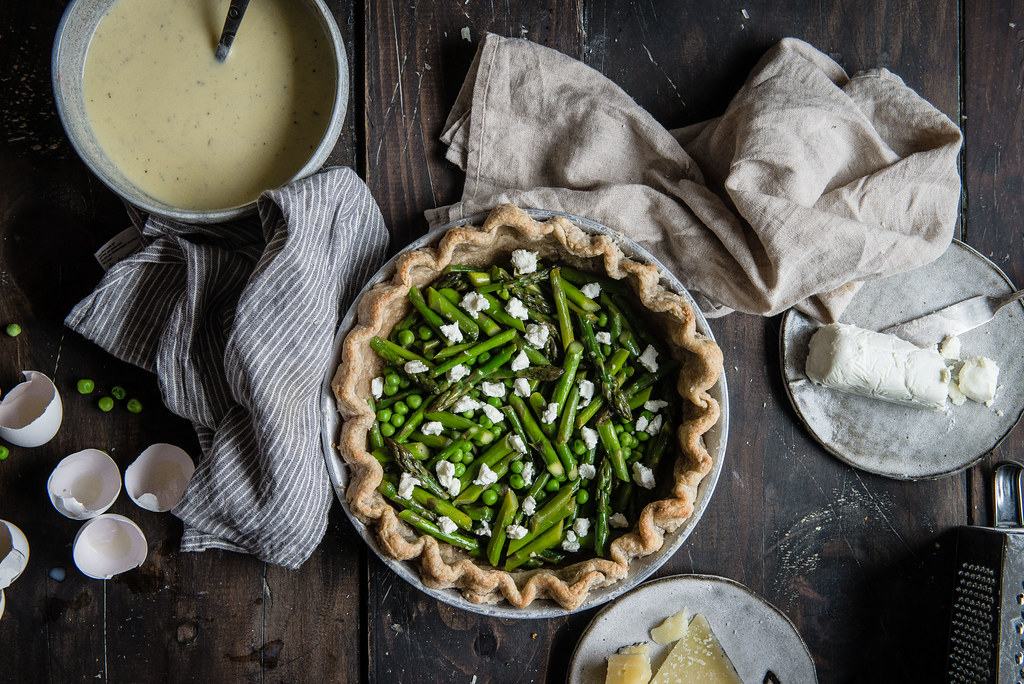 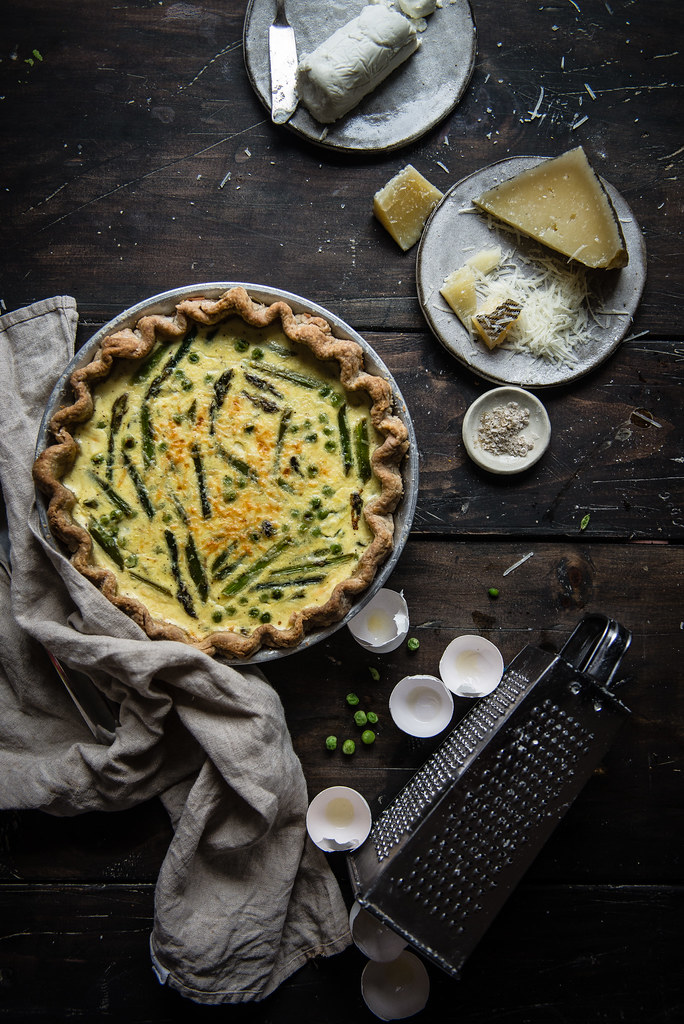 A note on the egg-to-liquid ratio: I used a ratio I found in a number of places, attributed to Julia Child, which has you put the eggs in a liquid measuring cup and then add however much liquid (cream, half-and-half, or milk) to bring the ratio to 1/2 cup of egg-liquid mixture per egg. So, for 3 eggs, you would put the eggs in a measuring cup and then add enough liquid to bring the mixture to 1 1/2 cups. Technically, that means 3 eggs should use a little less than 1 cup, but I used these measurements for simplicity’s sake — especially because another Julia Child recipe I’ve seen in a number of places calls for 3 eggs and far more cream, about 1 1/2 cups. You can up the liquid to that amount if you like, for a softer quiche.

That said, quiche is endlessly customizable once you have a trusty egg-to-liquid ratio. Another favorite of mine is leek, bacon, and Gruyere — just crisp up about 2-3 ounces of bacon (4-6 rashers) in the oven or on the stove, saute about 1 cup of sliced leeks in a few tablespoons of butter (or reserved bacon fat!) until tender and caramelized (about 15 minutes), and use these in place of the asparagus and green peas, above. Omit the goat cheese.