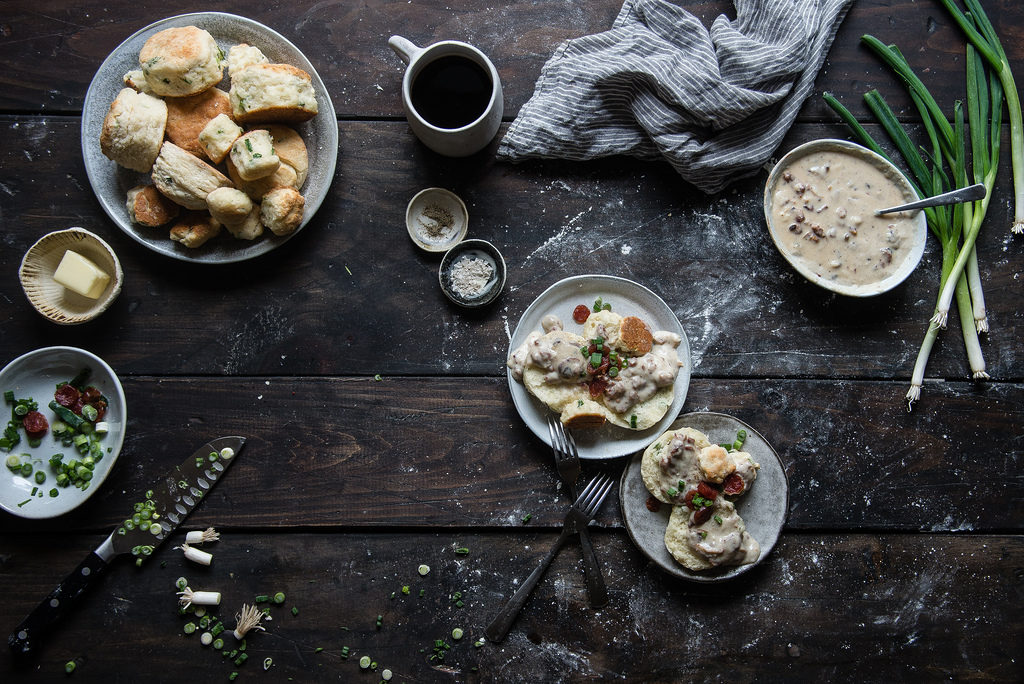 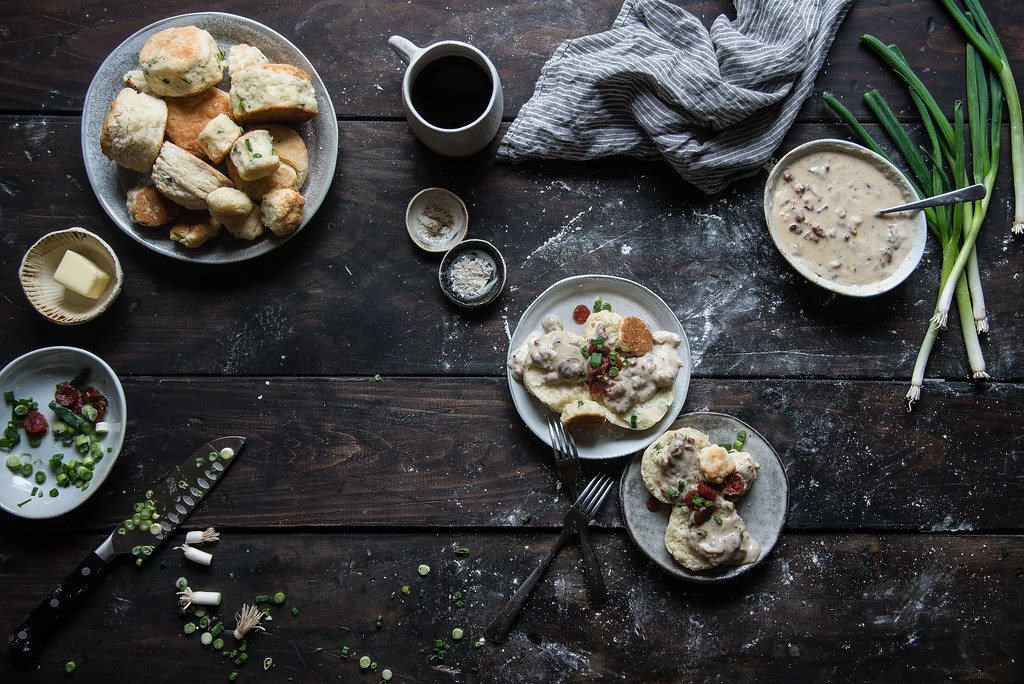 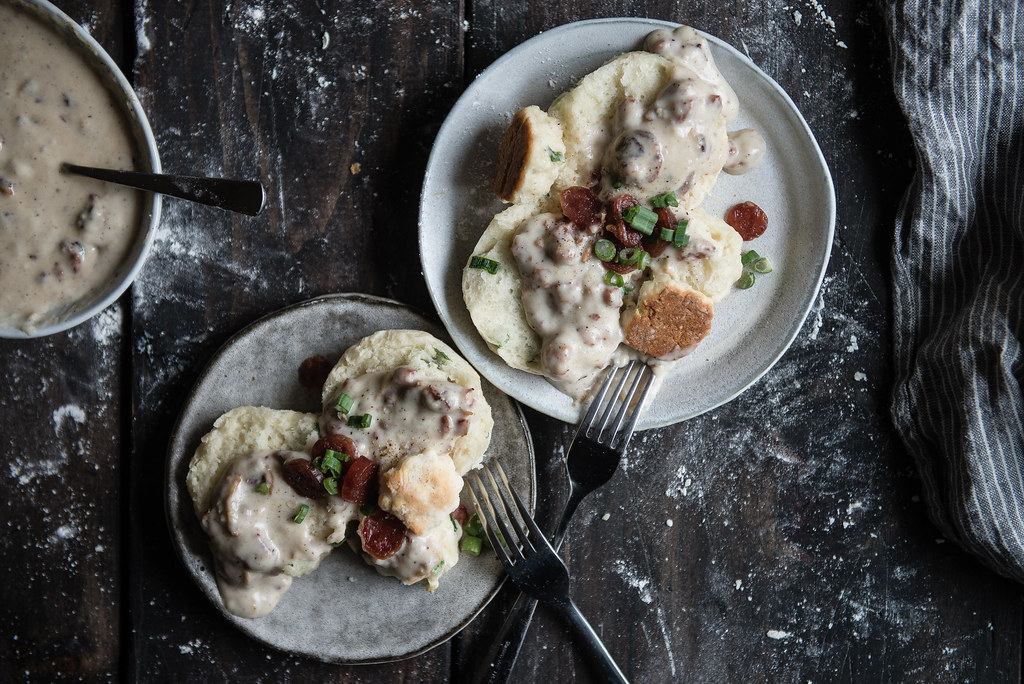 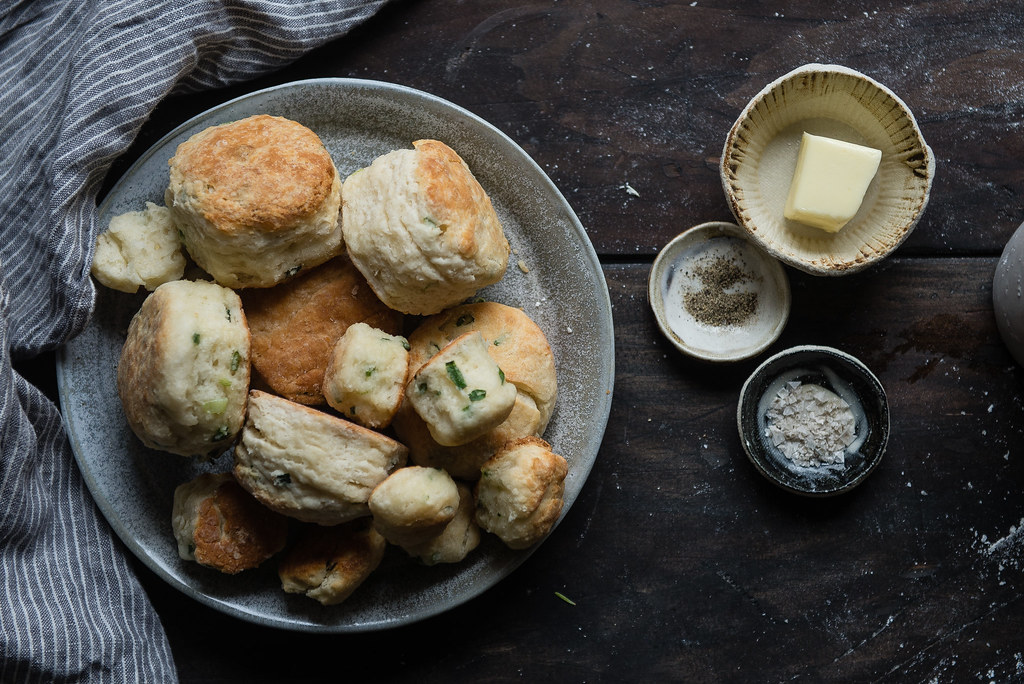 Hi friends! How was your Valentine’s Day? I feel like these last few days have been quintessentially wintry in our parts — we had a serene and snowy Valentine’s Day in New York, followed by a couple of those sharp, frigidly brilliant days where everything seems pale, still, and muted by the cold. I went out on Sunday for a few forgotten errands (I always feel this compulsion to stock up on everything I think we’ll need whenever it looks like a stretch of unpleasant weather is headed our way — and then I always fail and forget something) and I thought it was surprisingly peaceful, being one of the few bundled-up folks on the quiet, frosted sidewalks, under a bright blue sky and distant but vibrant sunshine. 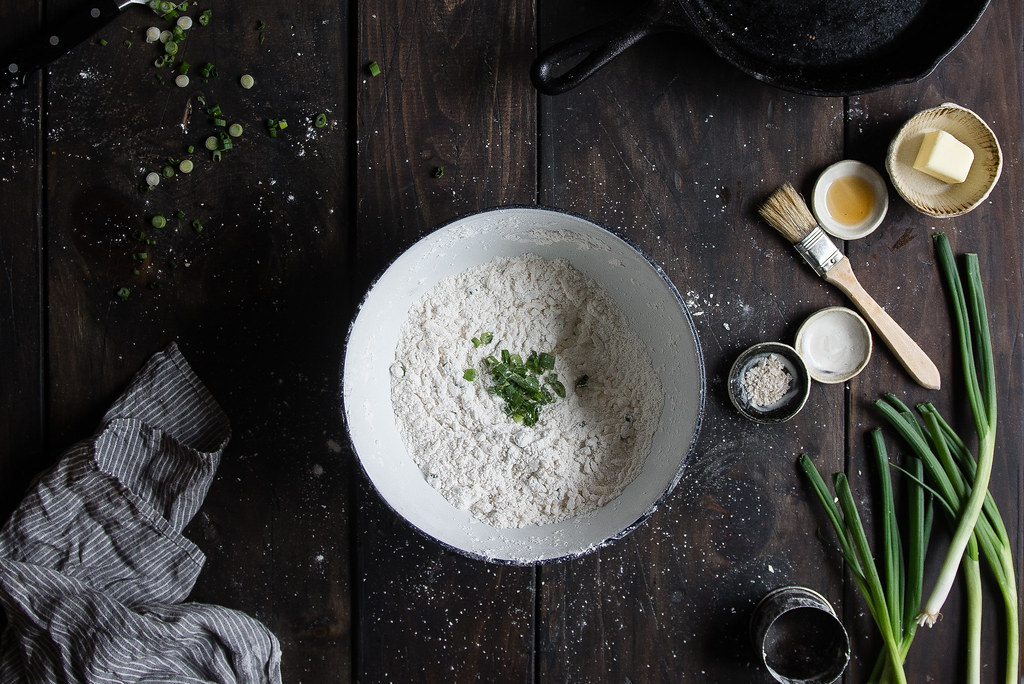 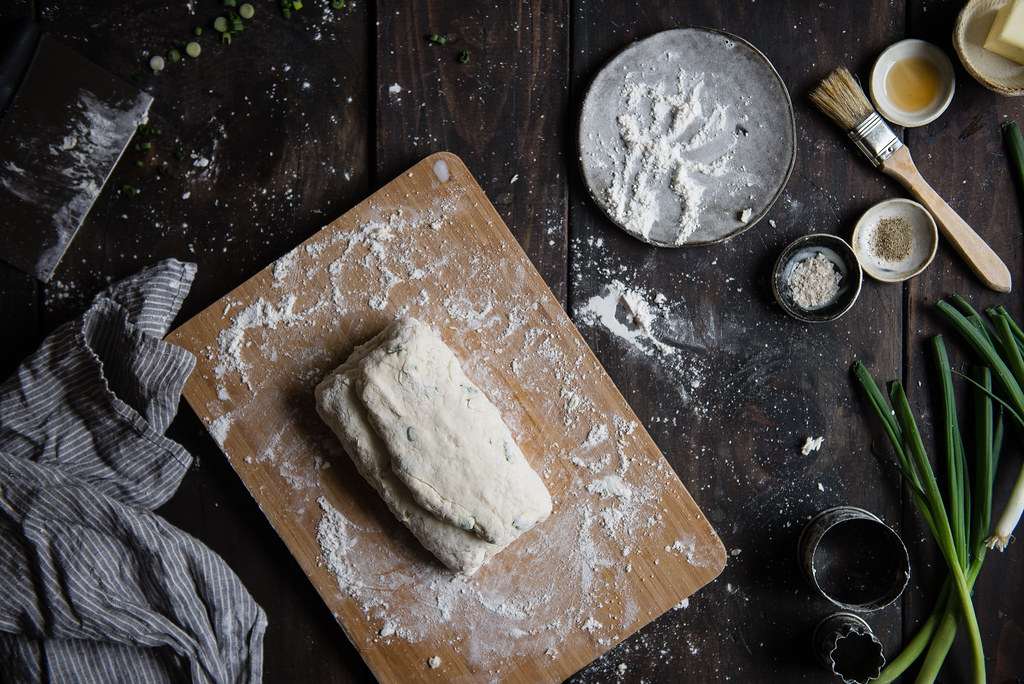 Outside of a few of those brief excursions, we were pretty much just cozy-seeking hermits this weekend. After a little dinner party with a few friends on Saturday, our companions were one giant pot of chili (sub cocoa powder and a crap ton of kale), a breakfast in bed tray, and Netflix.  Lately most things have taken that shape — work, sleep, work, sleep, nights in, comfort food, Netflix, repeat. (With an occasional interlude of wedding planning, and bickering with parents about whether Great-Aunt-Possibly-Cousin-Thrice-Removed Carol’s son Cyrus is invited.)

Other than the bickering, I like it. Saturday mornings are usually quiet kitchen playtime, the hours where B2 is (hopefully) playing video games and (hopefully) not working, and where I’m rummaging through our refrigerator in the hopes that I won’t be venturing outdoors.  And that’s where these biscuits came in!  I feel like at any given time I have at least one or two bundles of scallions going slowly limp in a produce drawer (B2 likes them over his scrambled eggs and, well, in about everything else), and ever since this scallion pie crust I’ve been mildly obsessed with working them into more than our usual applications.  So a few snowy Saturdays ago they made their way into twist on one of my most beloved Southern breakfast staples — biscuits and gravy. 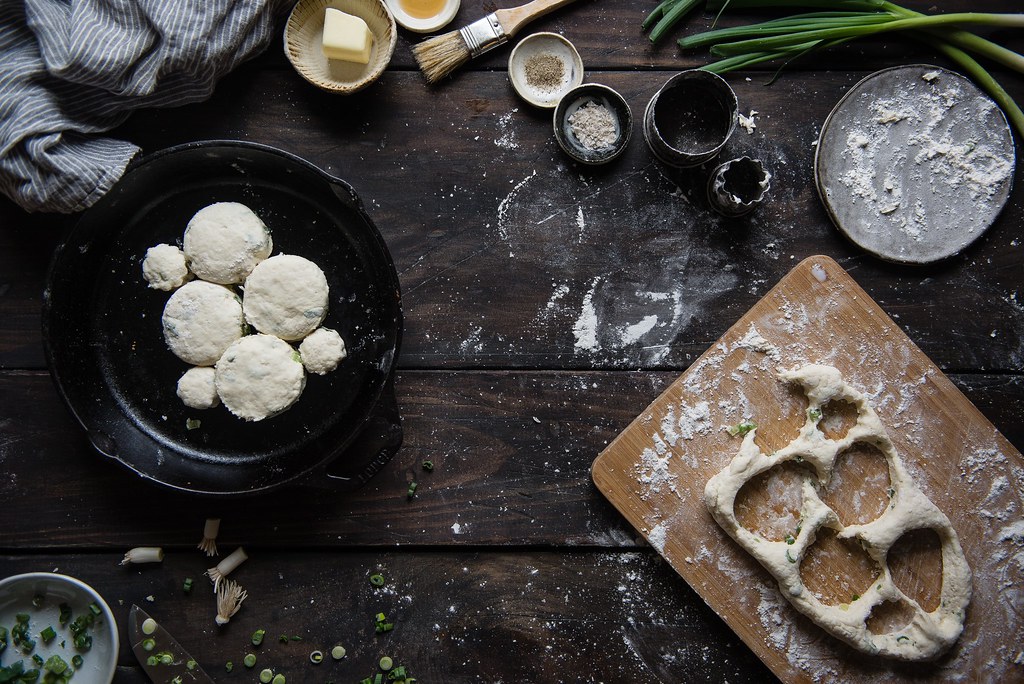 The funny thing about growing up in the South but in a Chinese kitchen is that I’ve grown up eating and loving good Southern food but know woefully little about making so much of it.  So I learned biscuits, not so much from a flour-dusted grandmother, but from Erika, and Beth, and Erin, and Laura — my friendly apron’ed neighbors of the blog world.  I kind of view it as a New-Age-y, modern-day take on the Southern food-as-love-as-community ideal — maybe?  Anyway.  With their help, these scallion biscuits were born — light, fluffy, melt-in-your-mouth layers with a bright, occasional pop of thinly sliced scallion.  Scallions, butter and flour are a magical trinity, and the mild tang of buttermilk (or yogurt, in my case) is a perfect complement to the bite from the green onions.  It’s the same beauty at play in Erika’s smoked Gouda and chive biscuits, or these adorable babes that Steph made mini (as always, my idol!) or, of course, the standard cheddar-scallion biscuit.

And oh my gosh, this gravy!  I can’t believe it’s taken almost two years for lap cheong to crop up on this blog (well, I can, it’s because I’m too lazy to make it to Chinatown), but I recently discovered that you can order those babies off Amazon, so their glory has finally made it into my kitchen.  These sweet, dried pork sausages are flavored with sugar and soy sauce (also, who knows what else) — and they are ambrosial. I used to go on fishing expeditions for them in all my mother’s dishes as a kid and mourned the day she stopped cooking with them because she thought they were too unhealthy.  (They probably are.)  They’re my favorite things in fried rice, sticky rice stuffing, or even just steamed right in the rice cooker with the rice. I felt a little cavalier trying them out in gravy, but it was everything I hoped — the fat renders just fine, and though the gravy turns out quite a bit sweeter than a normal Southern one, you probably know by now that sweet and savory dishes are my dream come true.  With a lot of black pepper and a few of these warm biscuits, this was my dream incarnation of a childhood breakfast.

P.S.  In case you’re interested, you can find me in a little interview on SBS Food this week, talking about Lunar New Year and other things (a.k.a. even more about how much I love scallions).  Happy LNY! 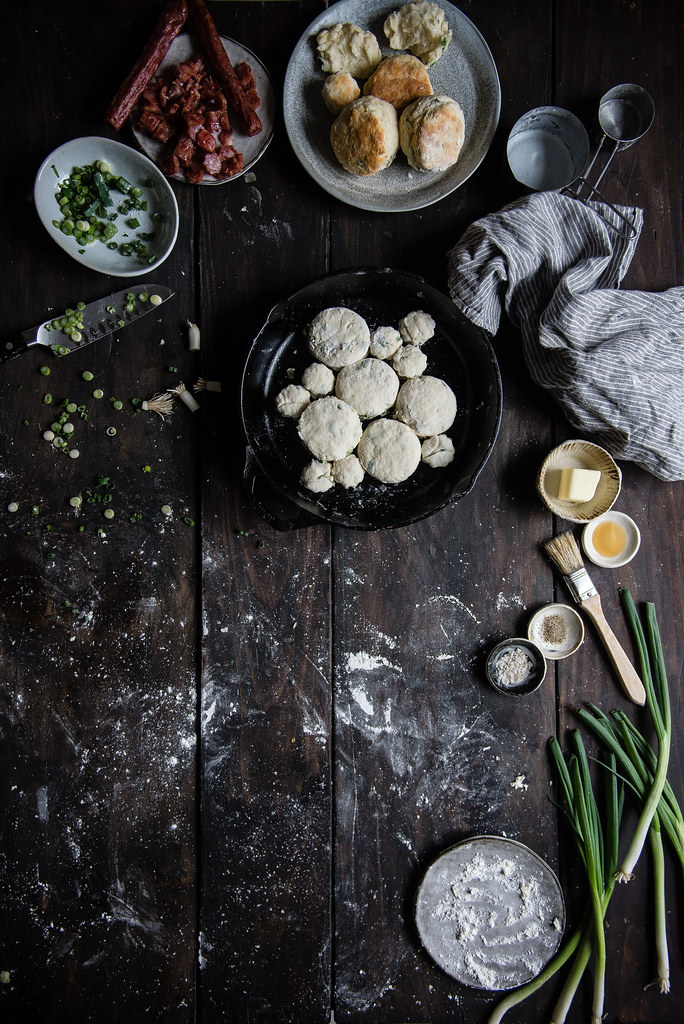 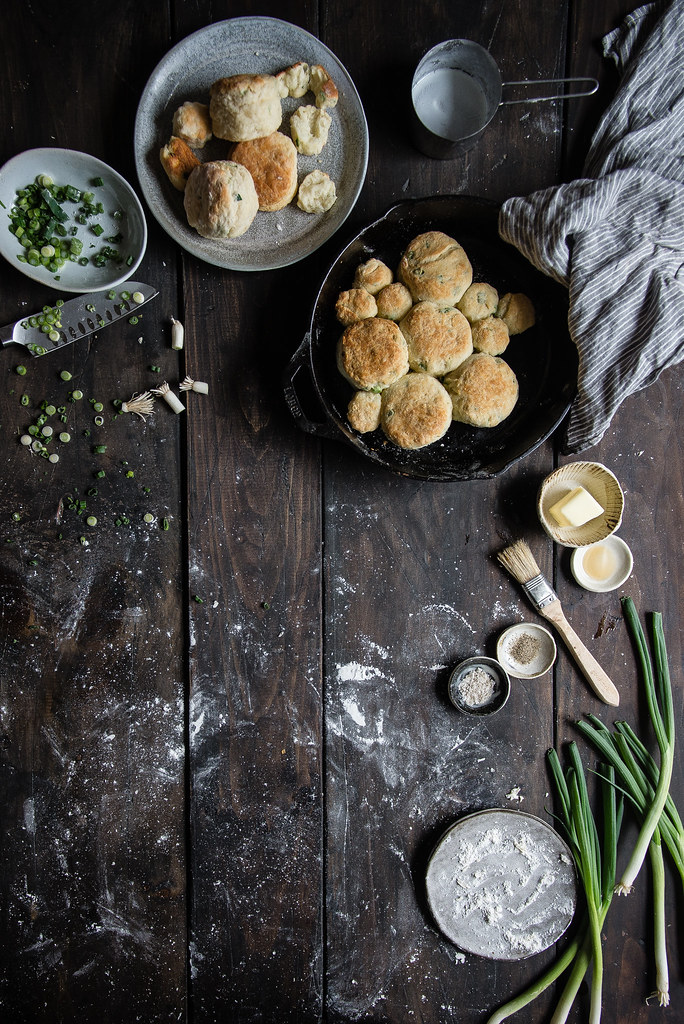 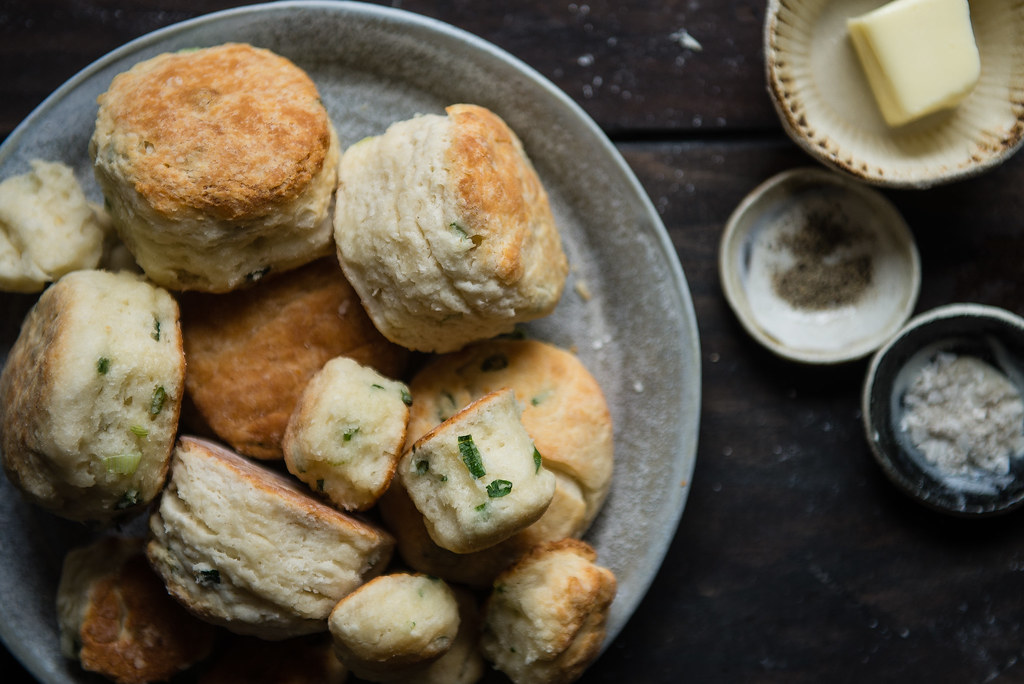 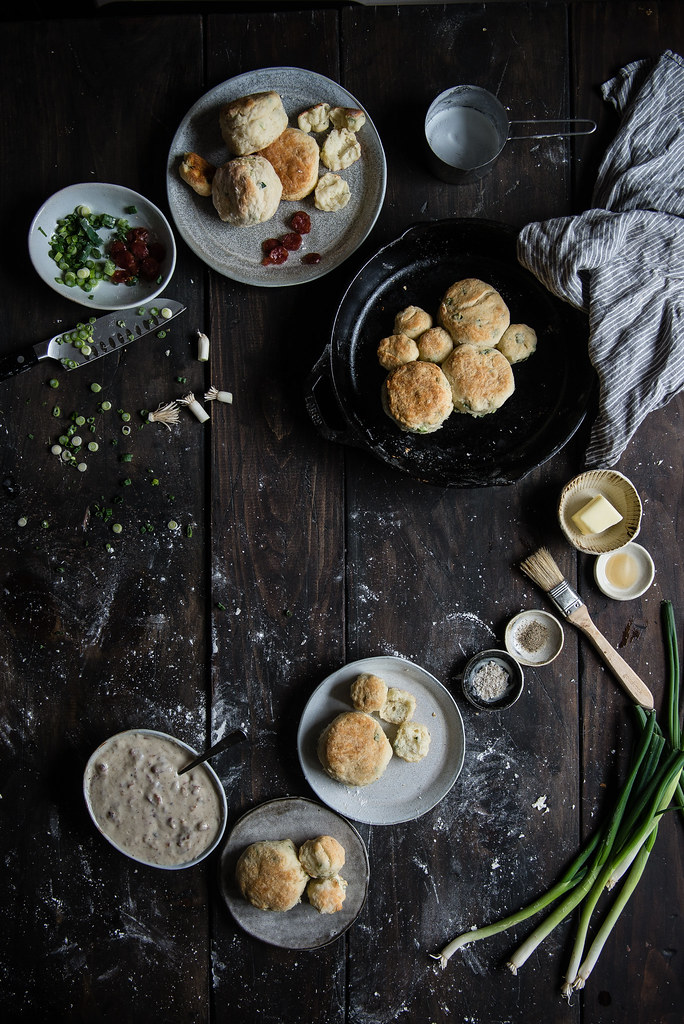 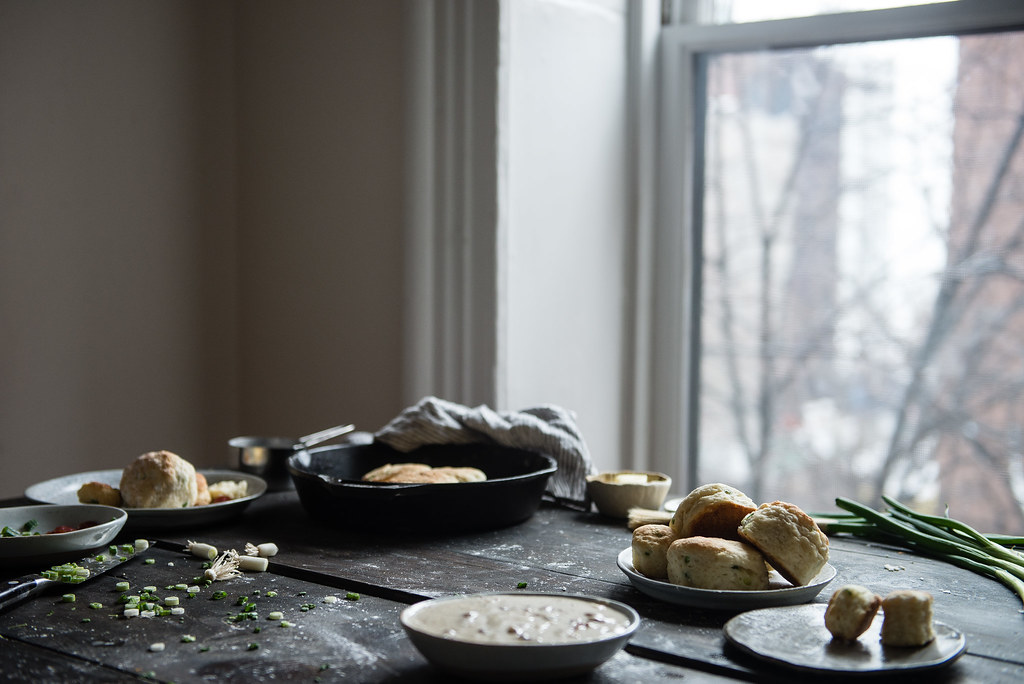 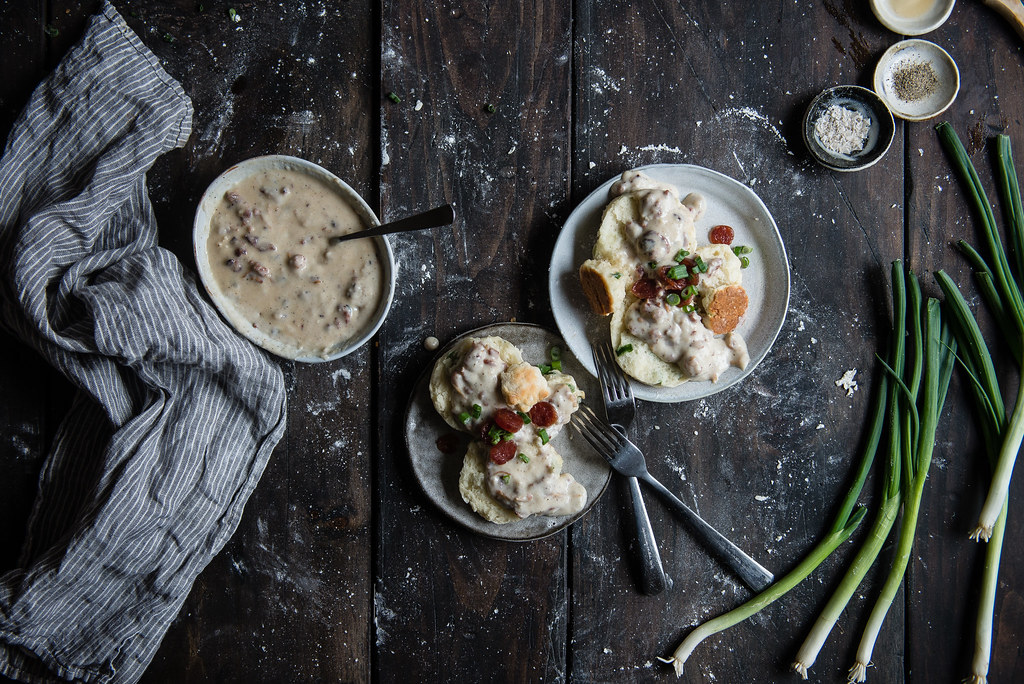 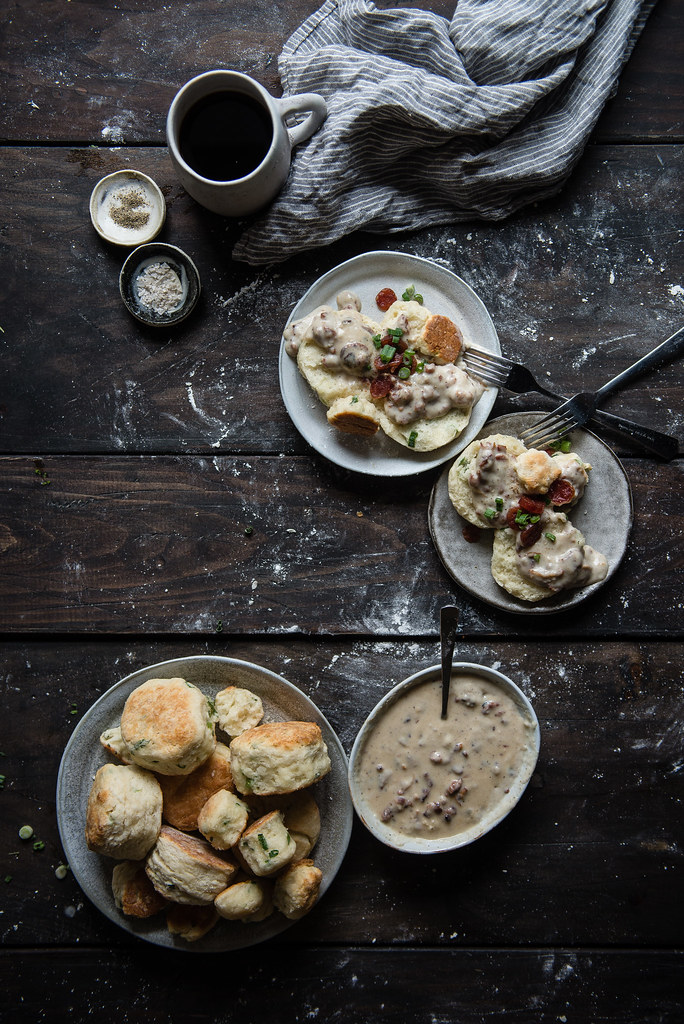 With help from Southern Souffle, Local Milk, Food52, and Blogging Over Thyme.

This recipe was a little much for our little household of two — it’s is more suited for four or even six — but everything is easily scaled down. I’ve made a half-batch of the biscuits and I’ve also frozen the extras, both with good results. Gravy will keep up to a week in the fridge, but I have not tried freezing it, so it may be best to make smaller batches as needed.

I tried out a few variations on this biscuit recipe, all with good results. The one above is ultimately closest to Beth’s gorgeous rendition. Substituting cake flour makes for a lighter, more tender biscuit, but I don’t think it’s truly necessary. For the “buttermilk,” you can use 2/3 cup regular, unflavored yogurt and 1/3 cup milk if you don’t have Greek yogurt on hand, or if you happen to have buttermilk, simply use 1 cup buttermilk. I just don’t usually have buttermilk, so a yogurt and milk combination has always been my go-to.

For a really revelatory, life-changing biscuit, you can up the butter content to 3/4 stick (6 tbsp) as per Erika’s recipe or even 1 stick (though in that case, decrease the “buttermilk” to 3/4 cup). For a biscuit I’d be serving with a very rich gravy anyhow, I thought it was fine conserving the butter for another use, so I kept it at 1/2 stick — but boy, that double-butter batch blew my mind, it was so good.

Also, you’re much better off consulting the biscuit goddesses linked above for tips on how to make your perfect fluffy, lofty, sky-high biscuits, but just a few observations from my my end — I really, really like grating frozen butter to make biscuits (as per Laura’s method) in the same way that I do for pie crust, but you can cut the butter in too. Also, you can use a rolling pin to roll the biscuit dough out if you like, but I thought patting with my fingers as per Erika’s method worked just as well and gave me a tad more control. Be super, super gentle in handling the dough at all times, and they’ll do just fine, even the scraps.

Finally, don’t be shy with the black pepper in the gravy! It’s hard to over-pepper a gravy — black pepper makes it shine.