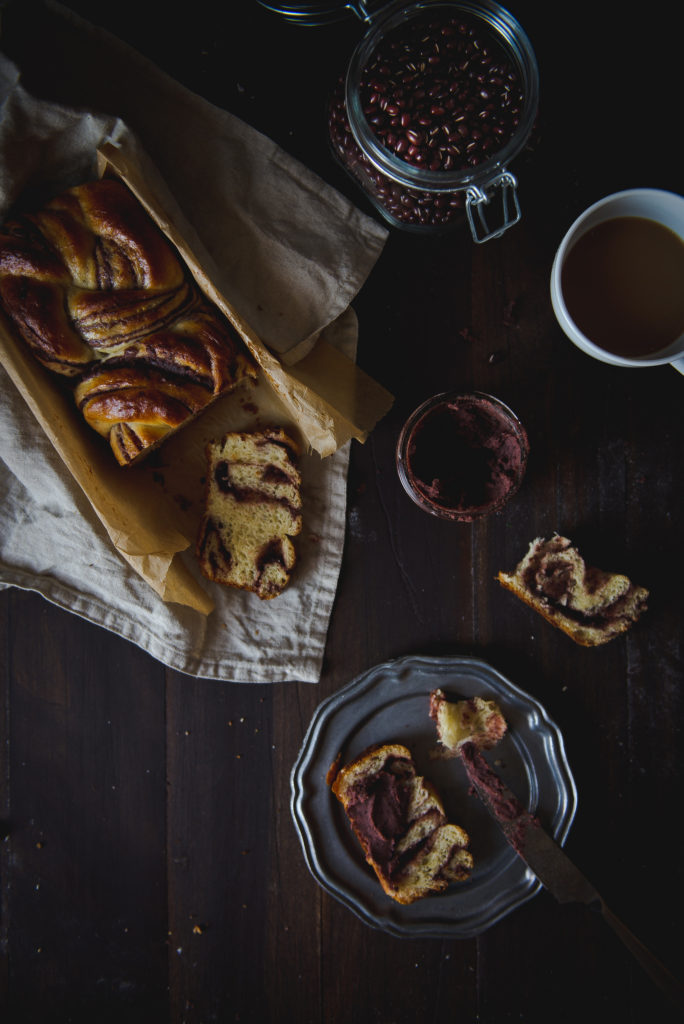 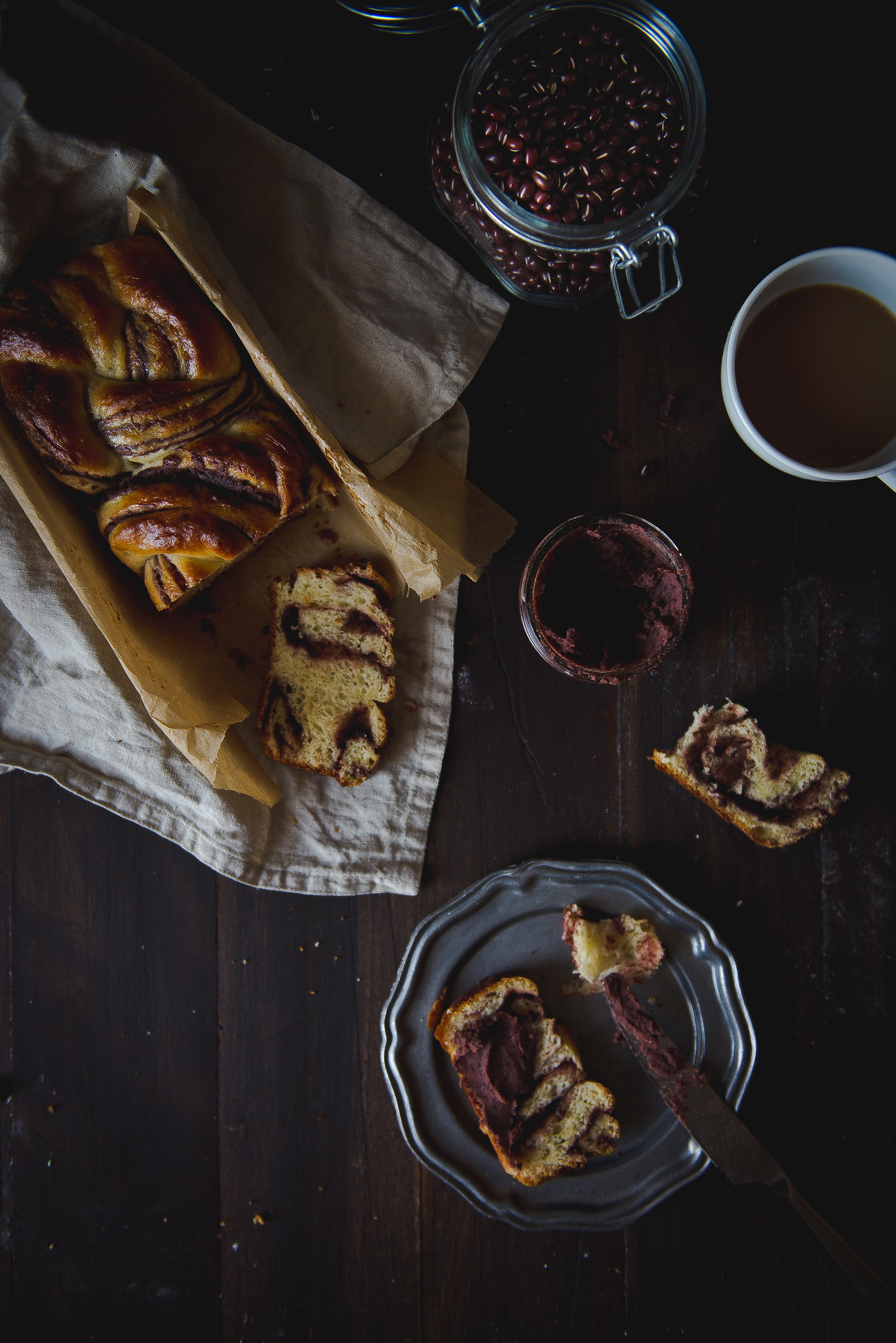 I never used to be interested in anything red bean, growing up.  Which is funny, given that it was one of the first Asian desserts I’ve made on this blog.  Maybe like the Eastern equivalent of vanilla ice cream, it struck me as boring, and (knowing me and my tendency towards decadence) I always liked to opt for the sweeter, creamier yellow custard steamed buns, or the lotus paste mooncakes, leaving their red bean sisters to my parents.  But recently good old red beans have experienced a little resurgence for me — as richer foods tend to overwhelm me more easily these days, red bean paste and sweets have truly grown on me as a comforting, home-like sweet that is flavorful but not cloying. 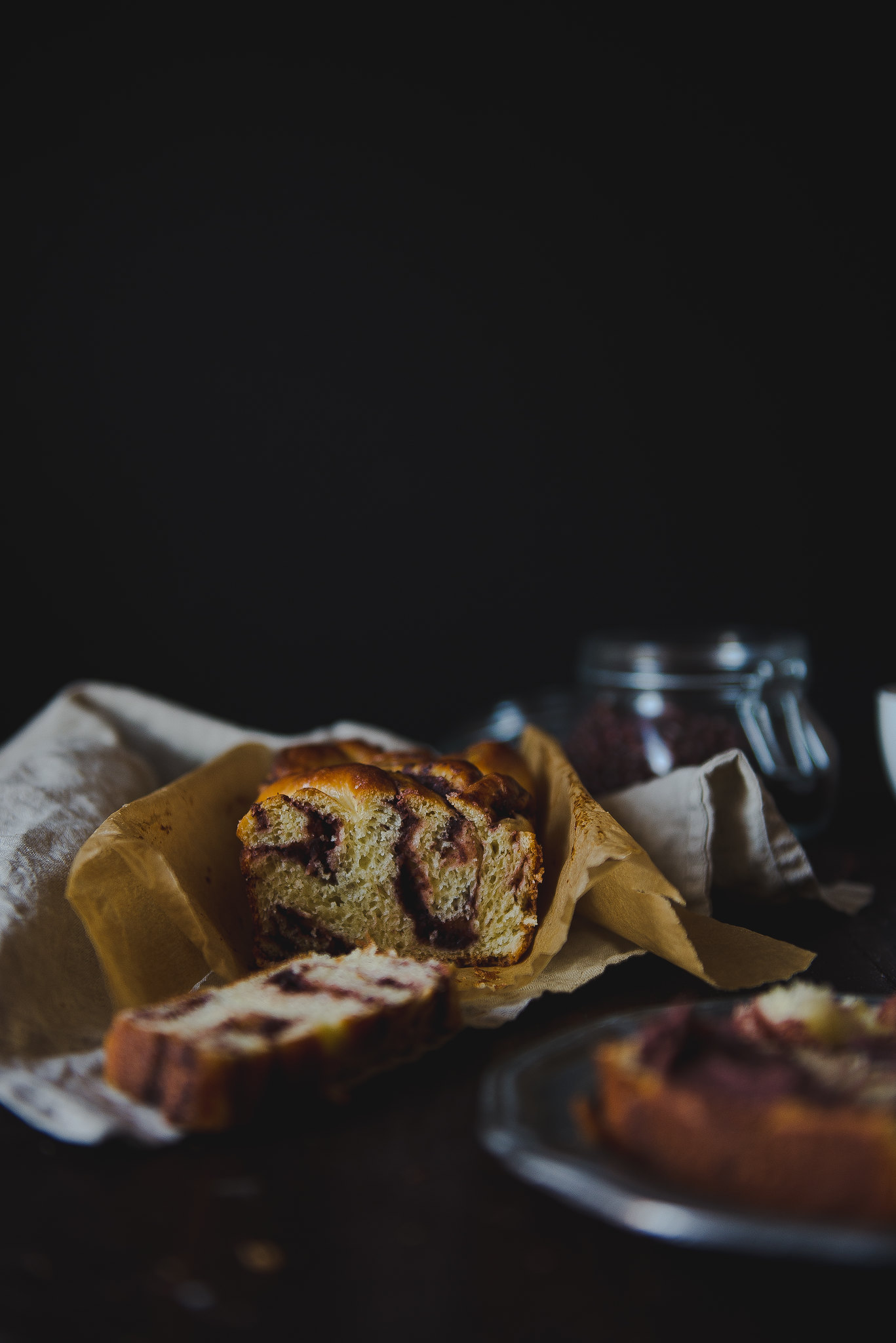 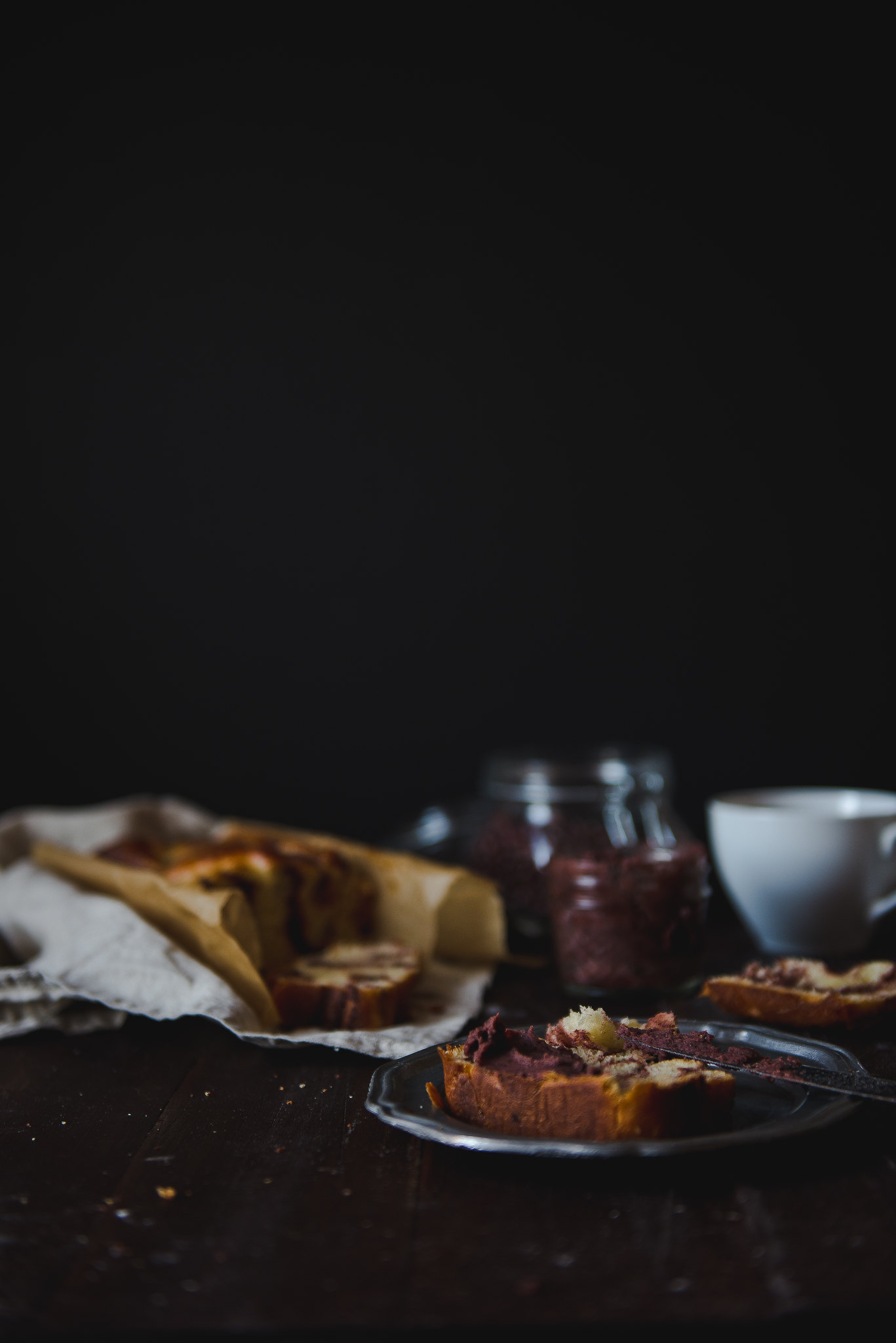 Which was why I decided a few weeks ago to stick it in a very new love of mine — glorious, glorious brioche.  (Did I just say that rich foods tend to overwhelm me?  Did I?  Hmm.)  Brioche has been on my to-make list for months, but I’ve been scared off by the idea of hand-kneading it, with its illogical 40% fat content, a stick of butter masquerading as a dough.  And then the genius godsends that are Sarah Kieffer and Artisan Bread in 5 came into my life, and … the rest is history.  The result is a slow-rise, no-knead (!) brioche that is just as decadent and delicious as its traditionally hand-kneaded counterpart — still fluffy, soft, and sweet, but with only half the butter and little to none of the fuss.  I’m obsessed. 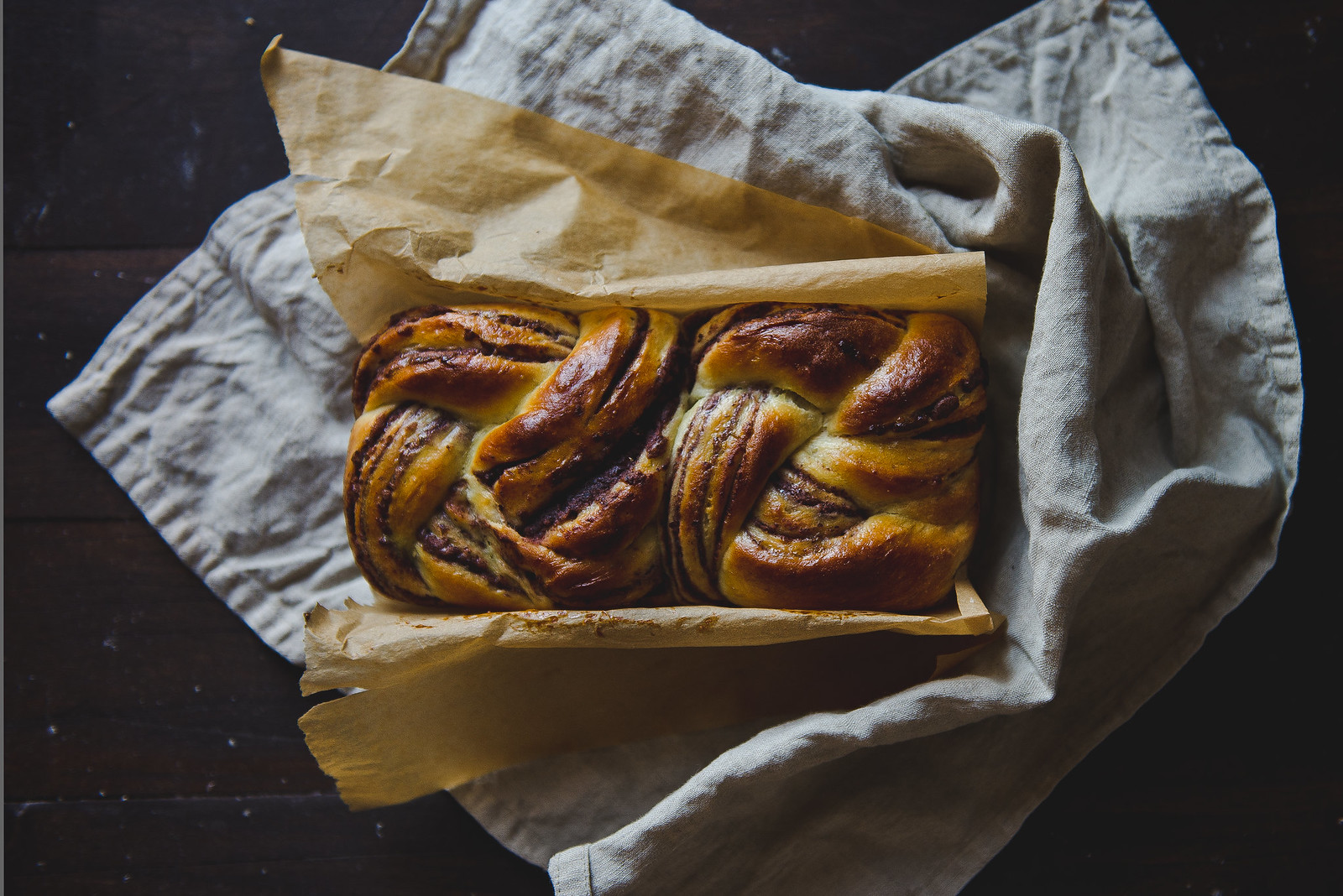 So I have to apologize in advance for the posts to come, because after this I got a little carried away.  I made this brioche, and then I kept on going and made a savory one, and then naturally after that came stuffed French toast … someday I’ll stop baking brioche.  Promise.

Until then, have this red bean brioche, to start.  I took my cues from Sarah and this cacao nib braided chocolate bread, then Melissa’s niftily braided riff on it.  And pretty much did nothing else that was my own, other than swapping out the chocolate filling for this red bean paste.  I’m still daydreaming about trying that original chocolate filling, though, or black sesame (!!), or Nutella.  I told you I have a brioche problem. 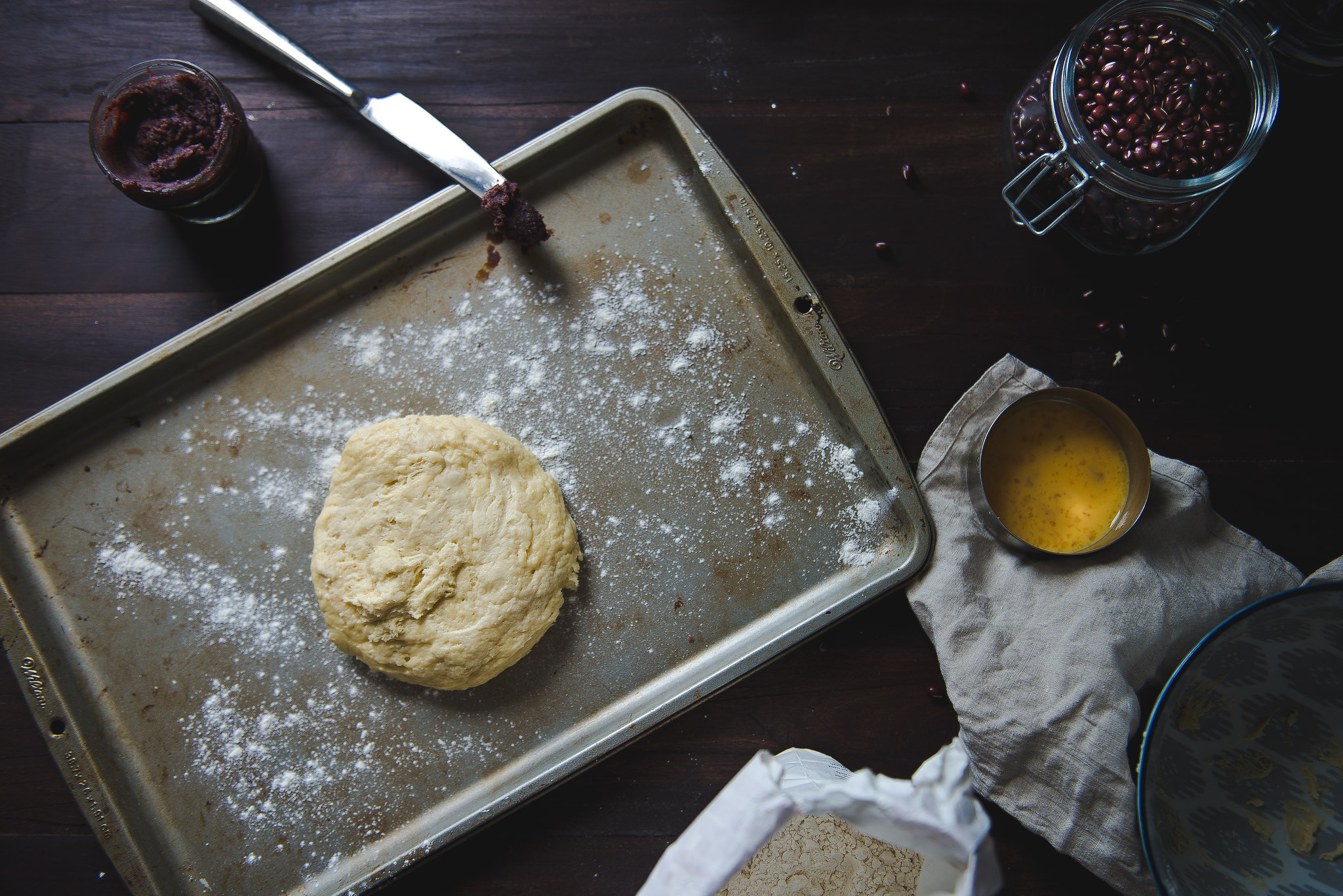 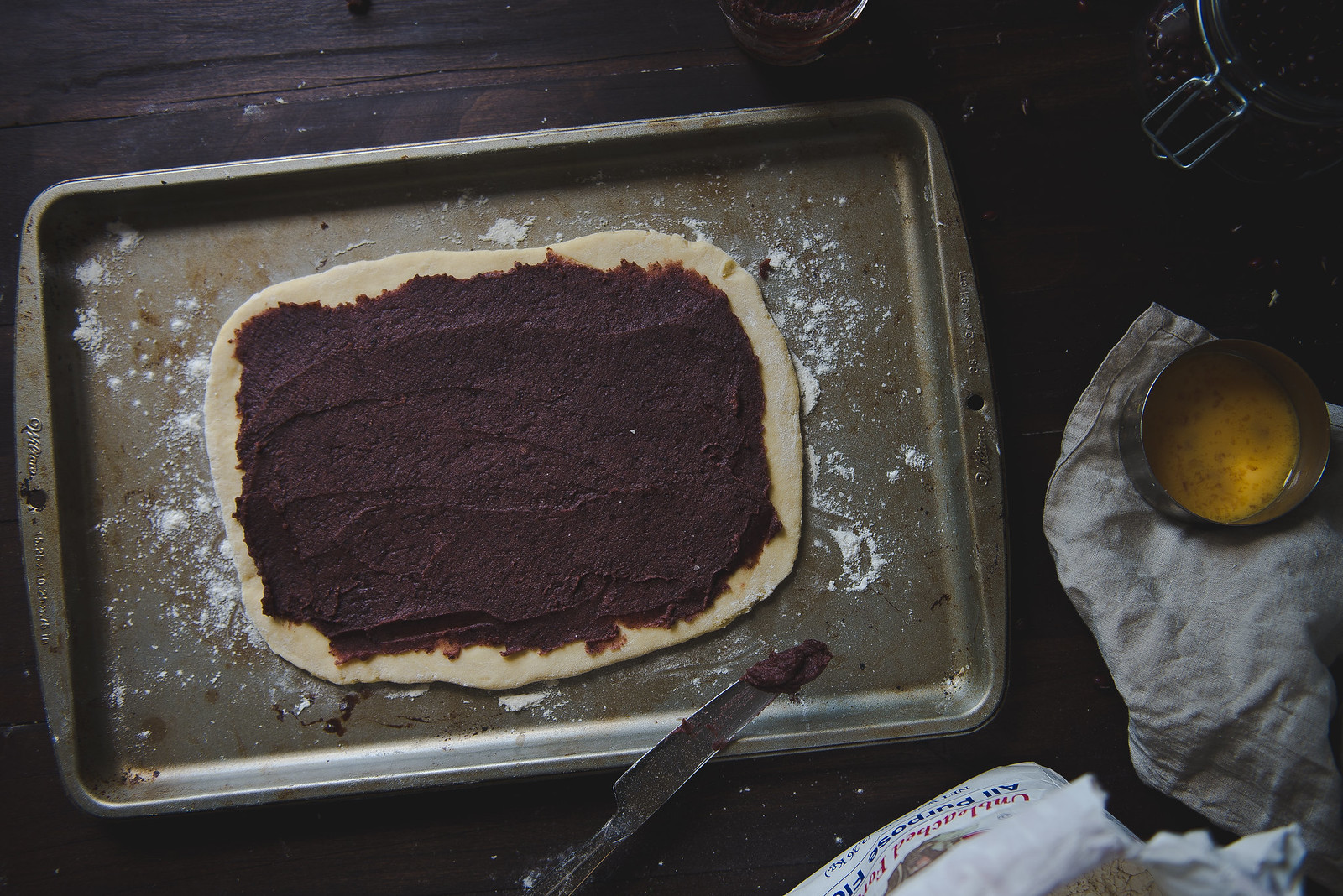 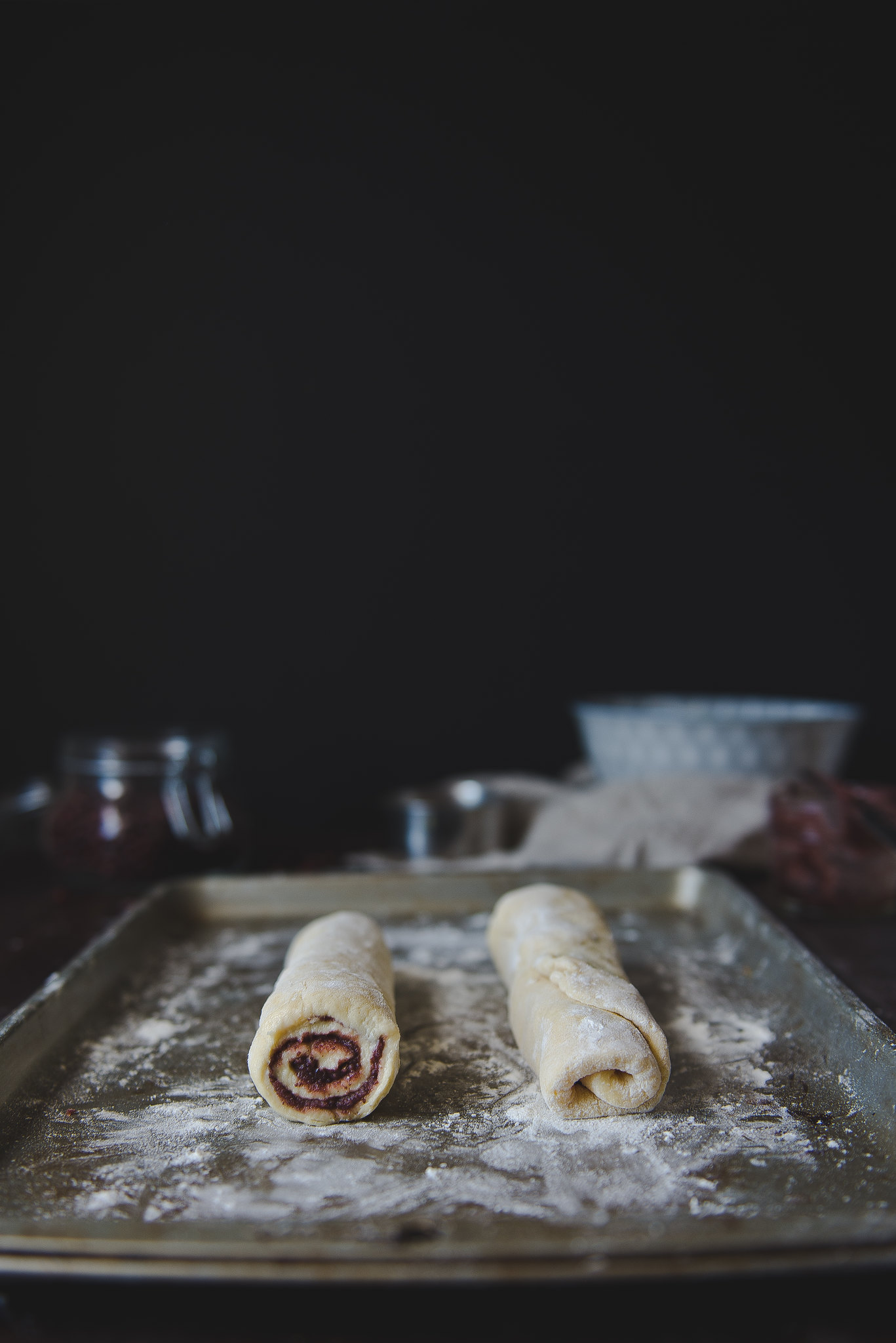 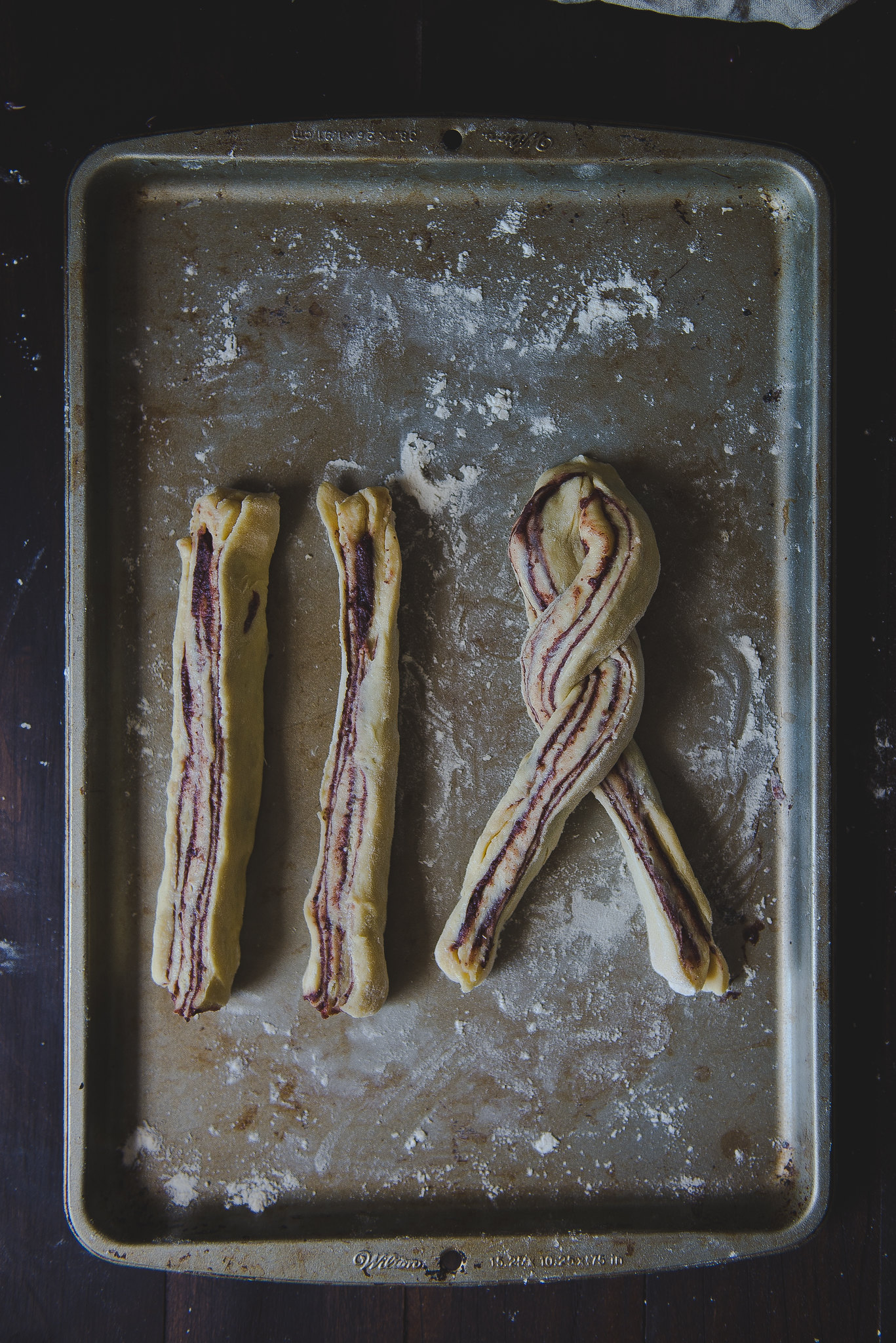 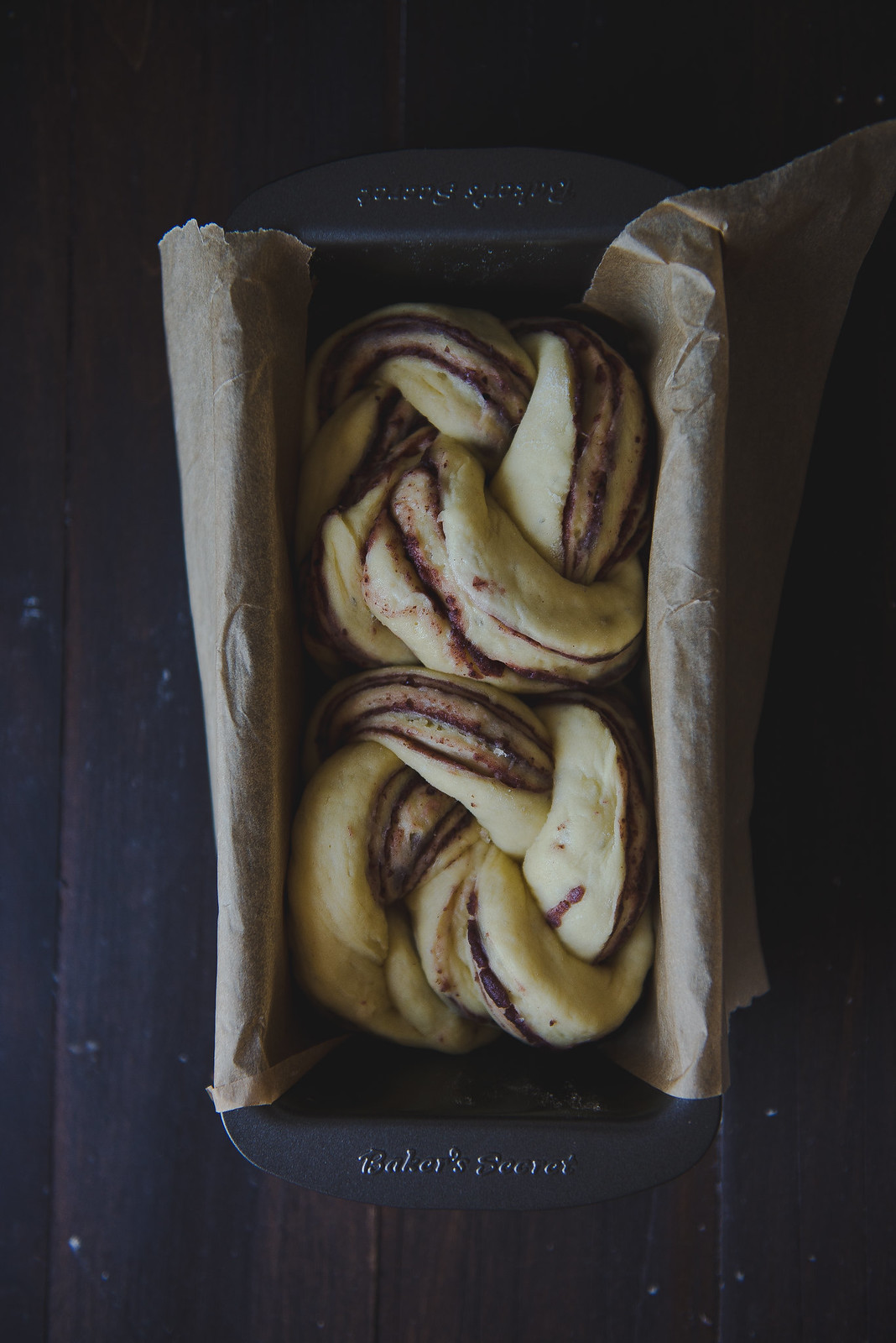 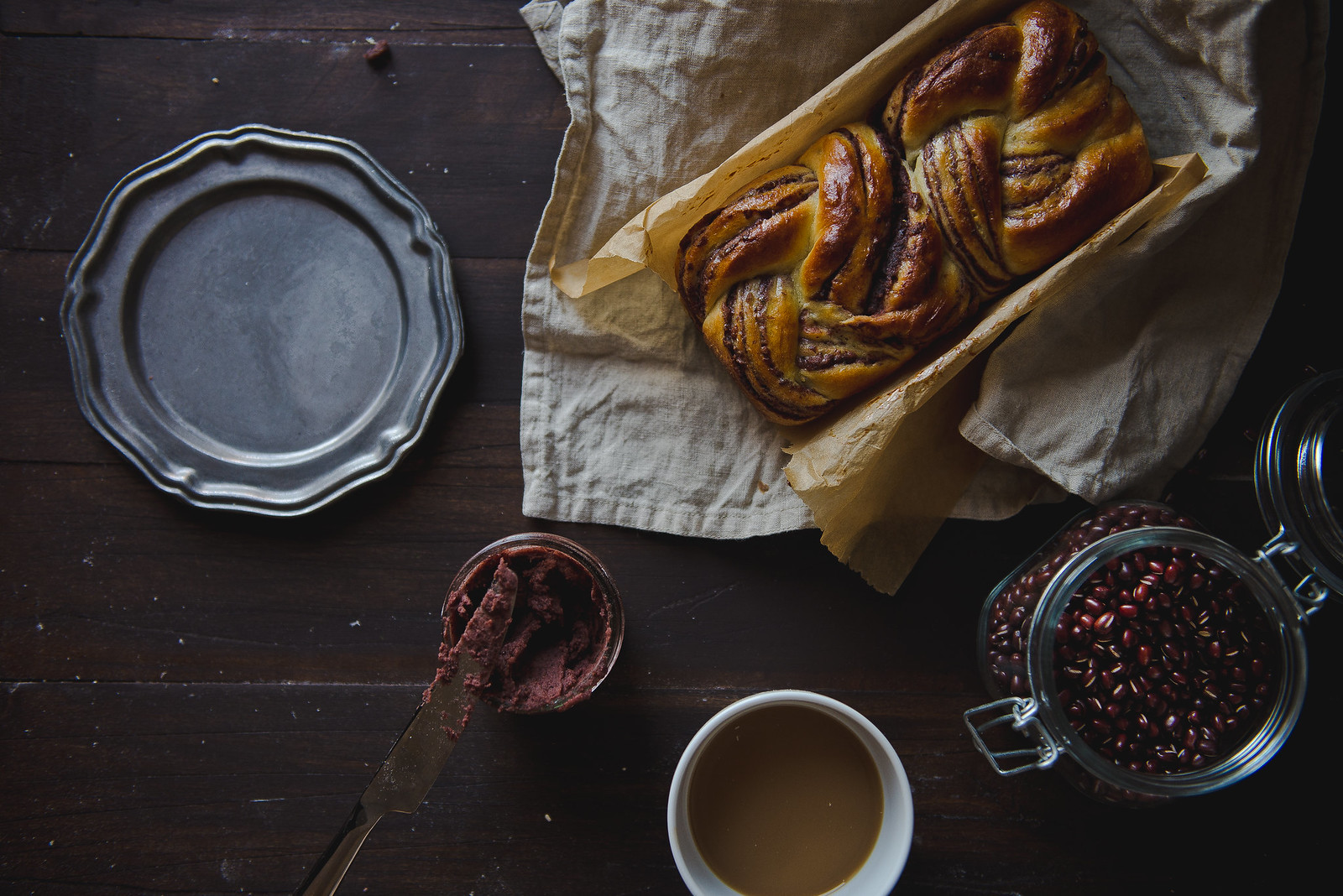 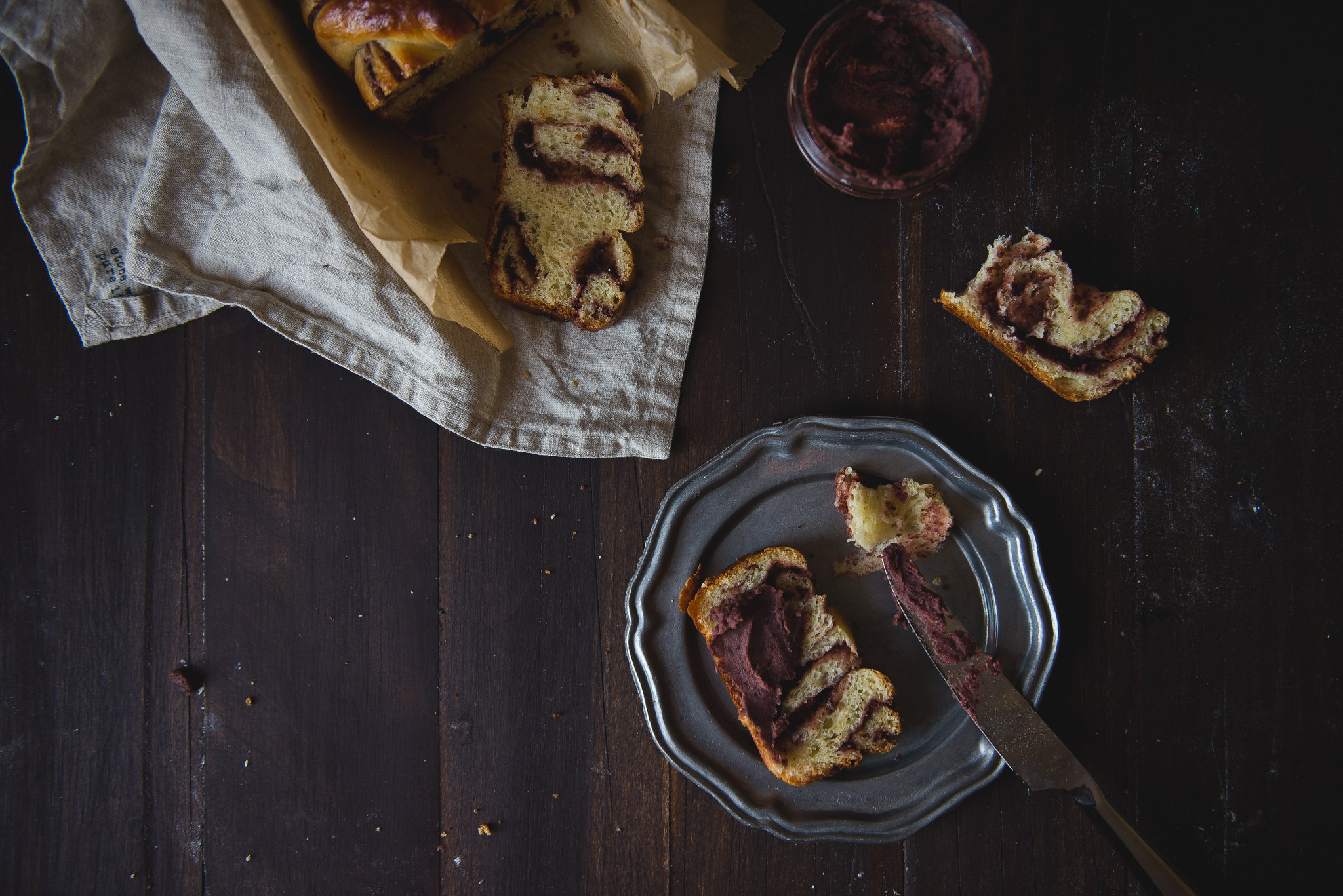 barely adapted from Artisan Bread in 5‘s brioche recipe and Sarah’s braided chocolate bread recipe collaboration with them. makes one small loaf, made in an 8″x4″ pan.

Just a quick note on yeast — I always use active dry because that’s what I have access to at the grocery store. Active dry yeast requires proofing in warm liquid before mixing with the dry ingredients (as above). If you have instant yeast instead, that’s fine. Just swap out the active dry for slightly less instant (so, here, when it’s already a scant 1/2 tsp, use maybe 1/3 tsp), and instead of proofing it, just sift it in with the flour in Step 3 and skip Step 1 altogether. The same will apply for any other of my yeast recipes.